On the way to Nelson two days ago, we passed through Paparoa National Park on the west coast of the South Island, one of New Zealand’s smallest national parks. It’s famous for its limestone geological formations, nearby blue penguins (I didn’t see any) and the rock blowholes, where the sea violently enters the caverns it’s carved, sending up huge plumes of spray. I haven’t time to describe the scenery in detail, but here are some photos. 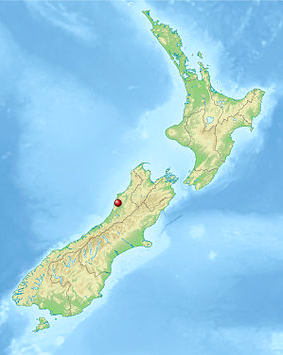 Below is the nīkau (Rhopalostylis sapida), the only palm tree native to New Zealand, and one that shows pronounced geographic variation, though I’m not sure that variation has a genetic component. It’s a lovely tree with a green swelling (“crownshaft”) atop the trunk. The Maori ate the inner parts and used the leaves for weaving baskets and mats, as well as thatching roofs. 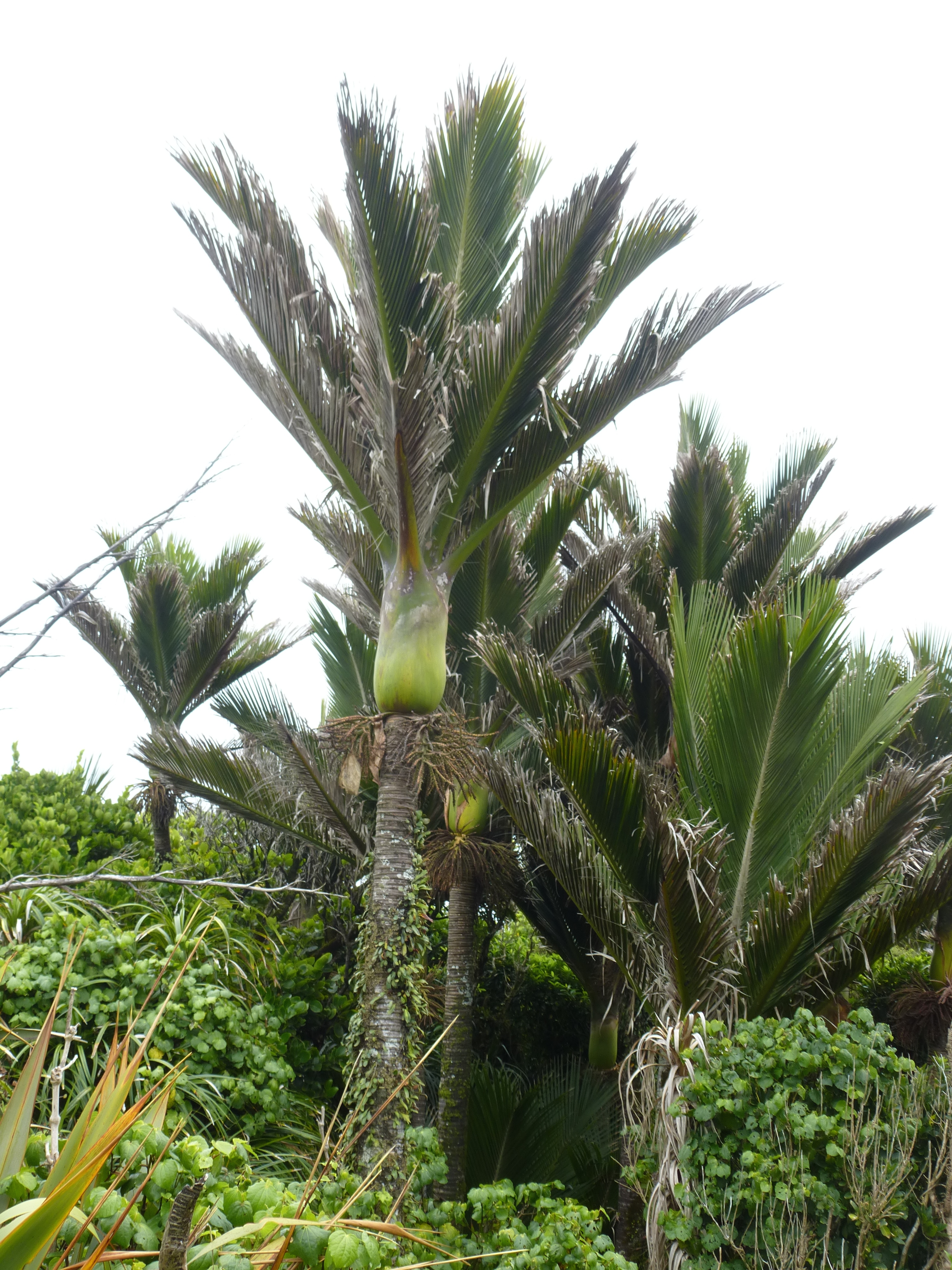 Here are the flowers. which sprout from near the base: 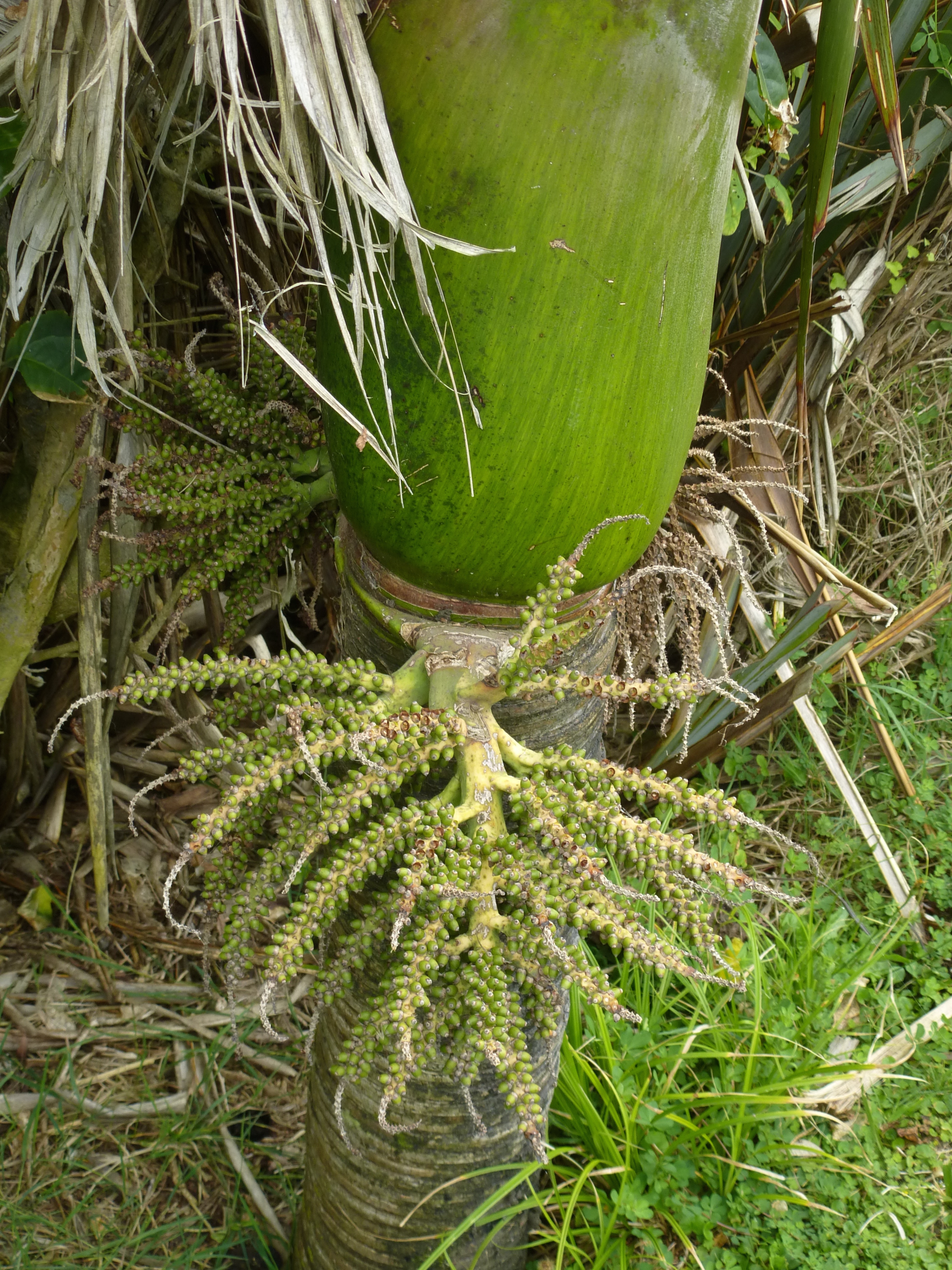 New Zealand flax (Phormium spp.; there are two species, one endemic). Its tough fibers were used by the Maori to make textiles, mats, baskets, sandals, and many other products. 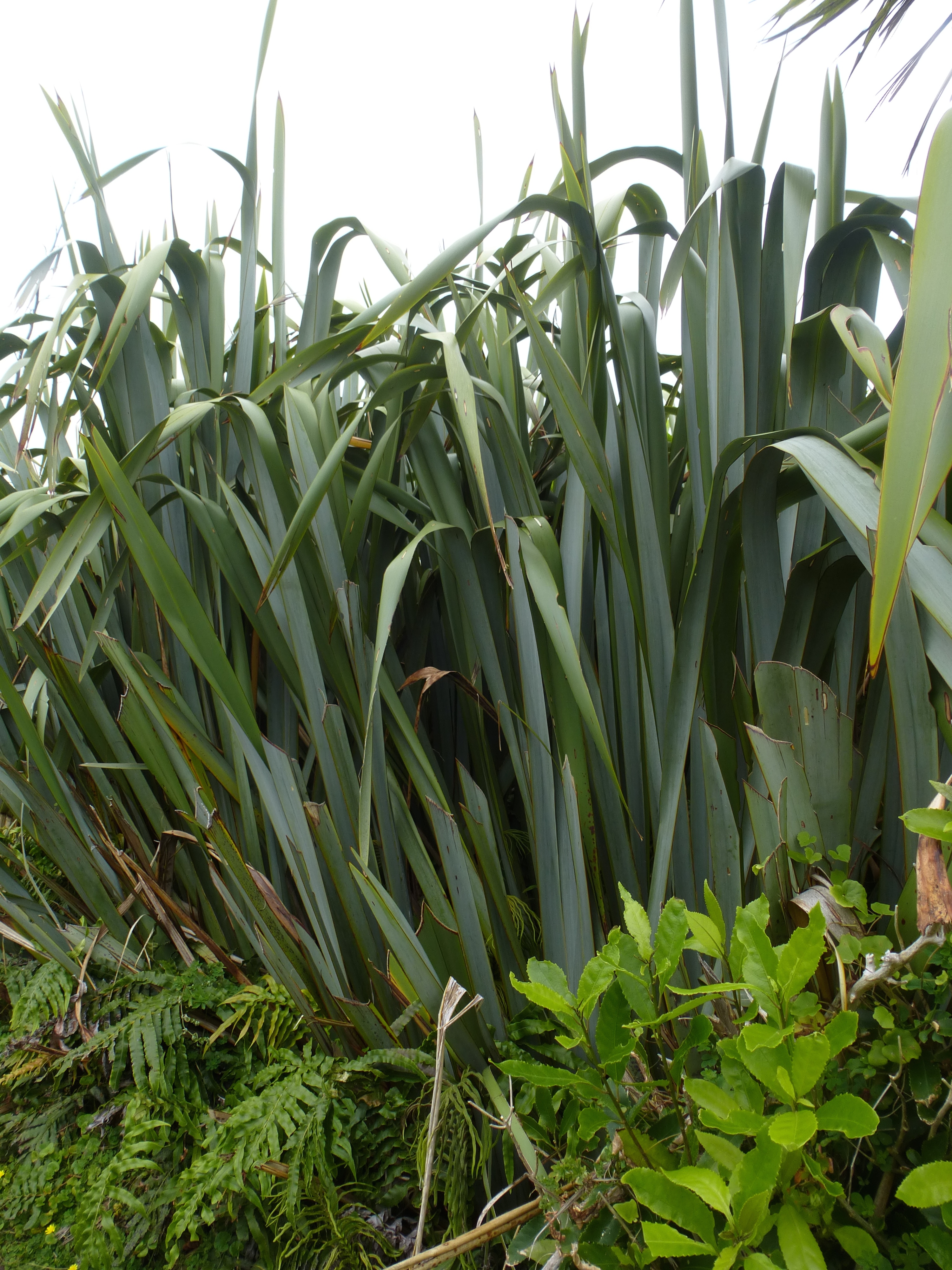 The rocks along the shore are called “pancake rocks” because they occur in prominent layers; they’re ancient limestone that has been uplifted. As the New Zealand Department of Conservation notes:

The Pancake Rocks are most spectacular in the Putai area. They were formed 30 million years ago from minute fragments of dead marine creatures and plants landed on the seabed about 2 km below the surface. Immense water pressure caused the fragments to solidify in hard and soft layers. Gradually seismic action lifted the limestone above the seabed. Mildly acidic rain, wind and seawater sculpted the bizarre shapes.

You can see the layers on the rocks to the left (the Kiwis do eat pancakes, too; they’re very common): 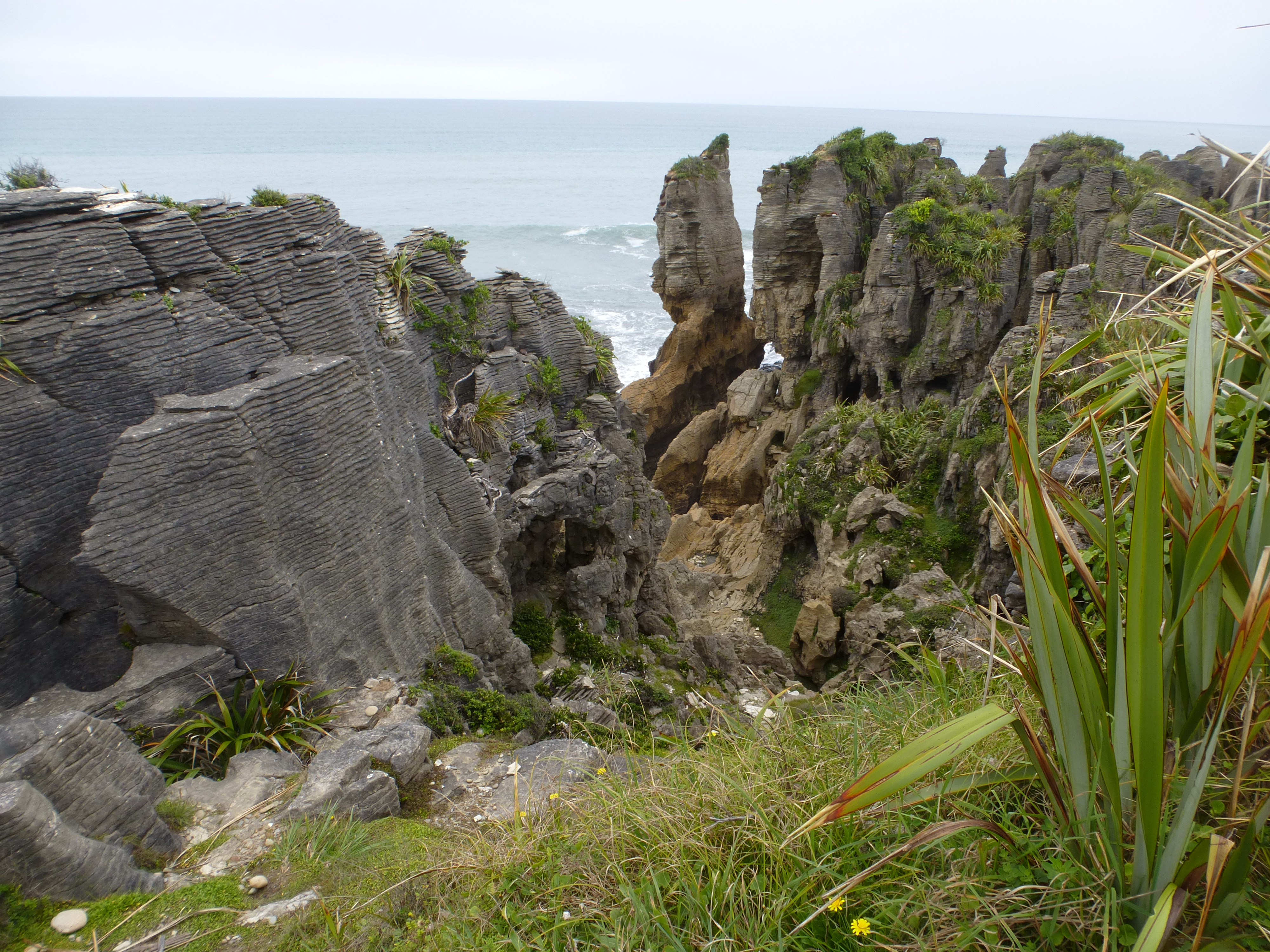 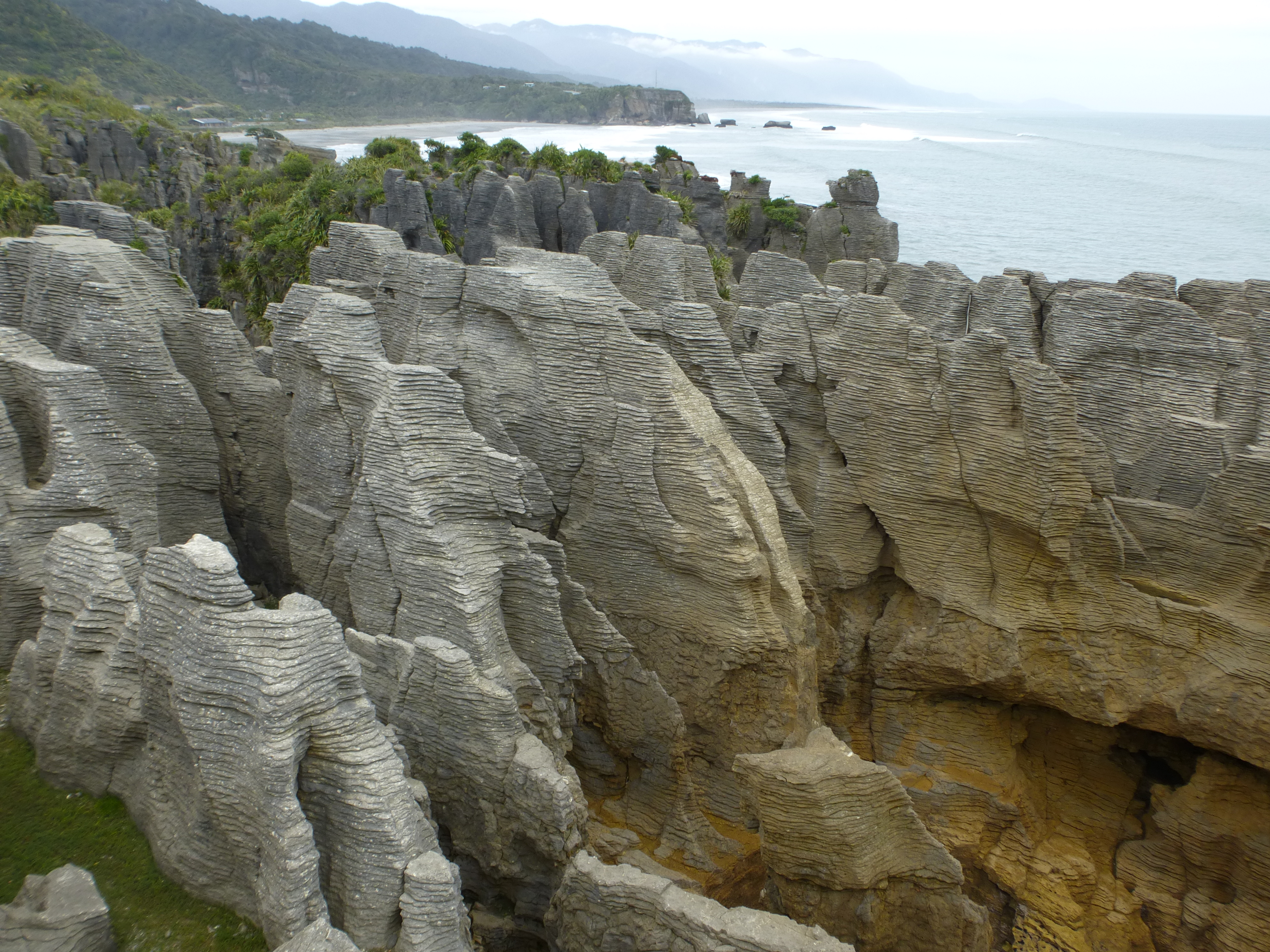 The layers are clearly visible: 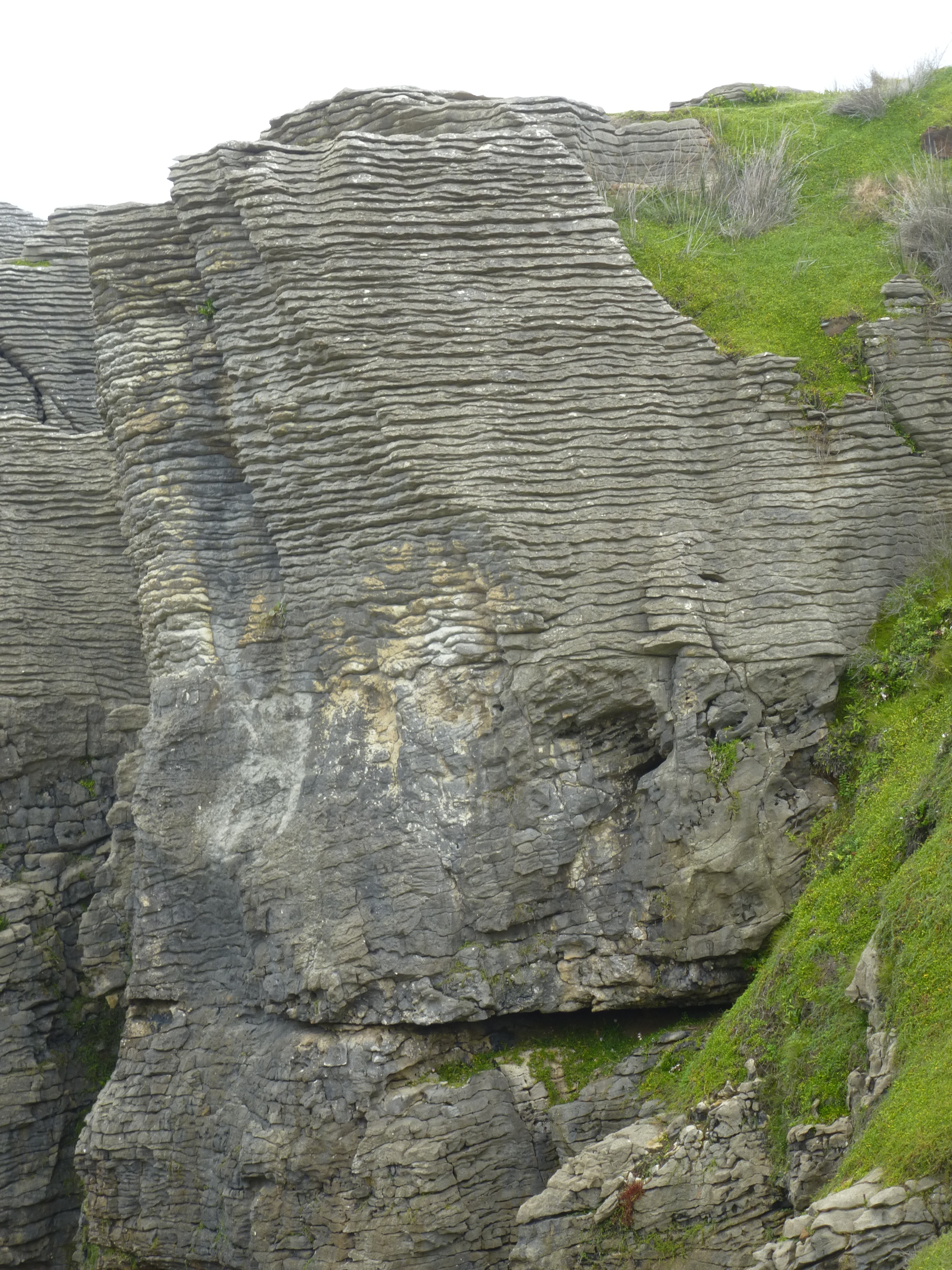 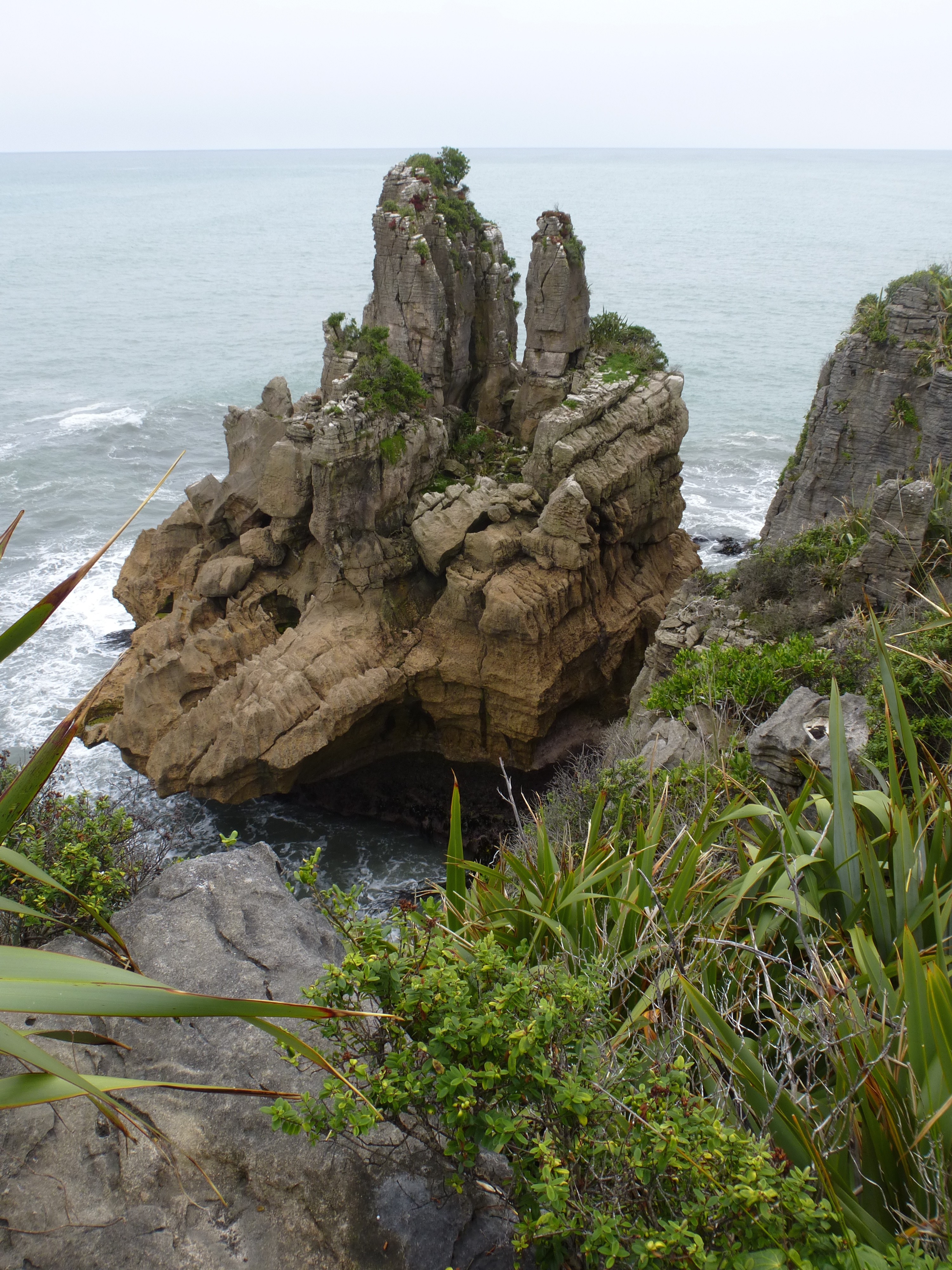 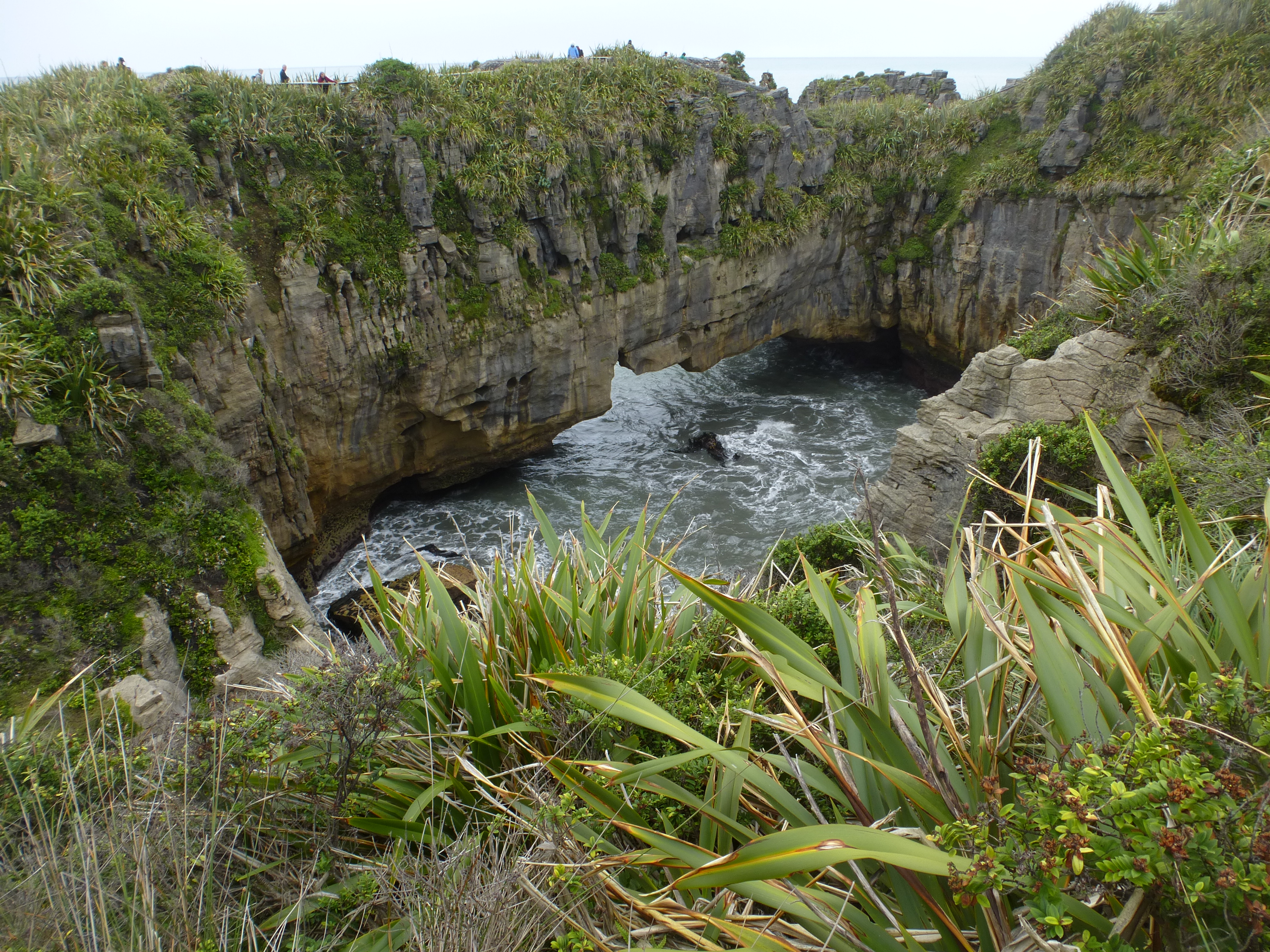 A blowhole, with entering water spraying up: 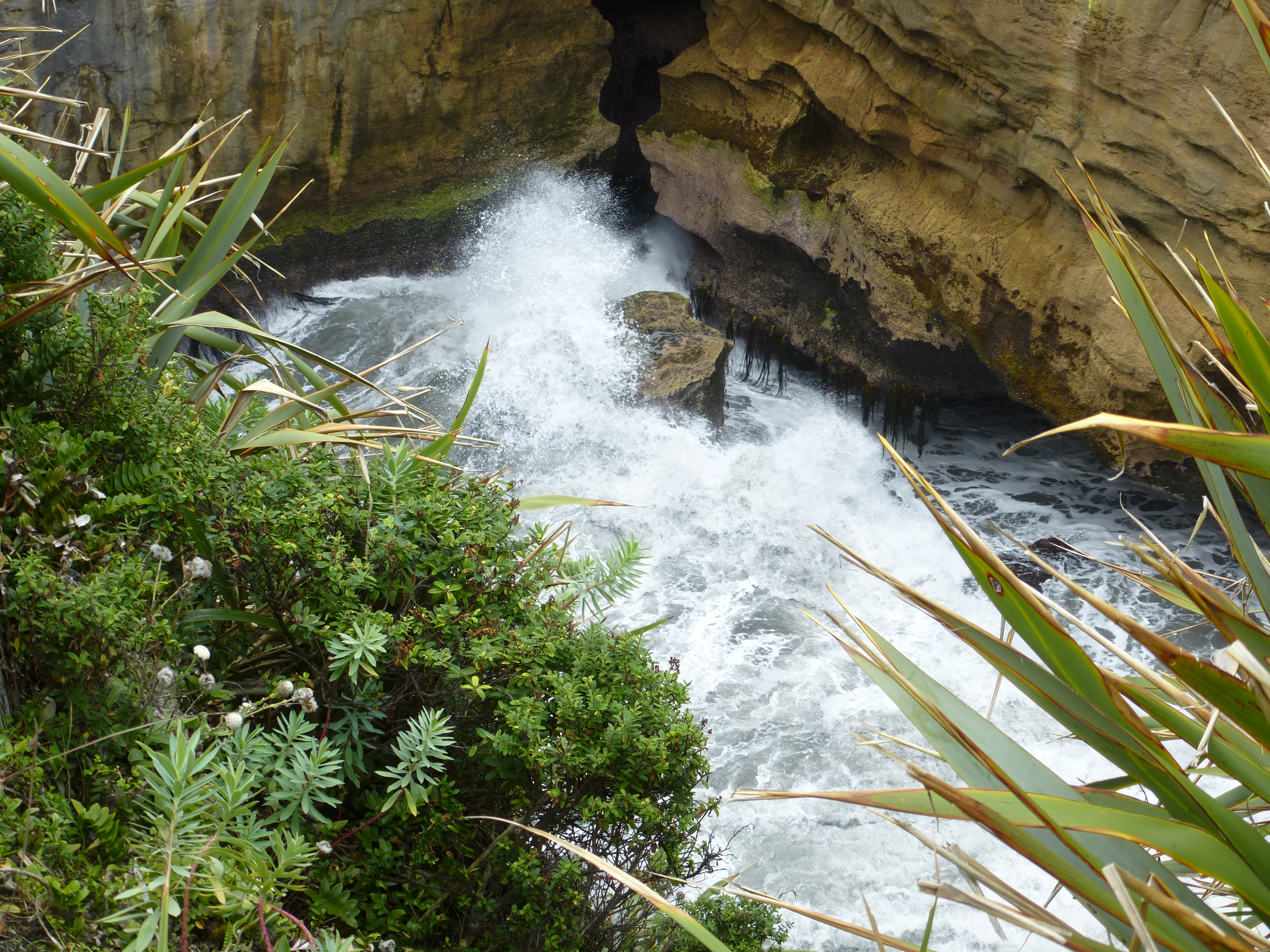 If you look closely, you can see fanciful figures in this formation, including a lion on the right about to prey on the figures to the left: 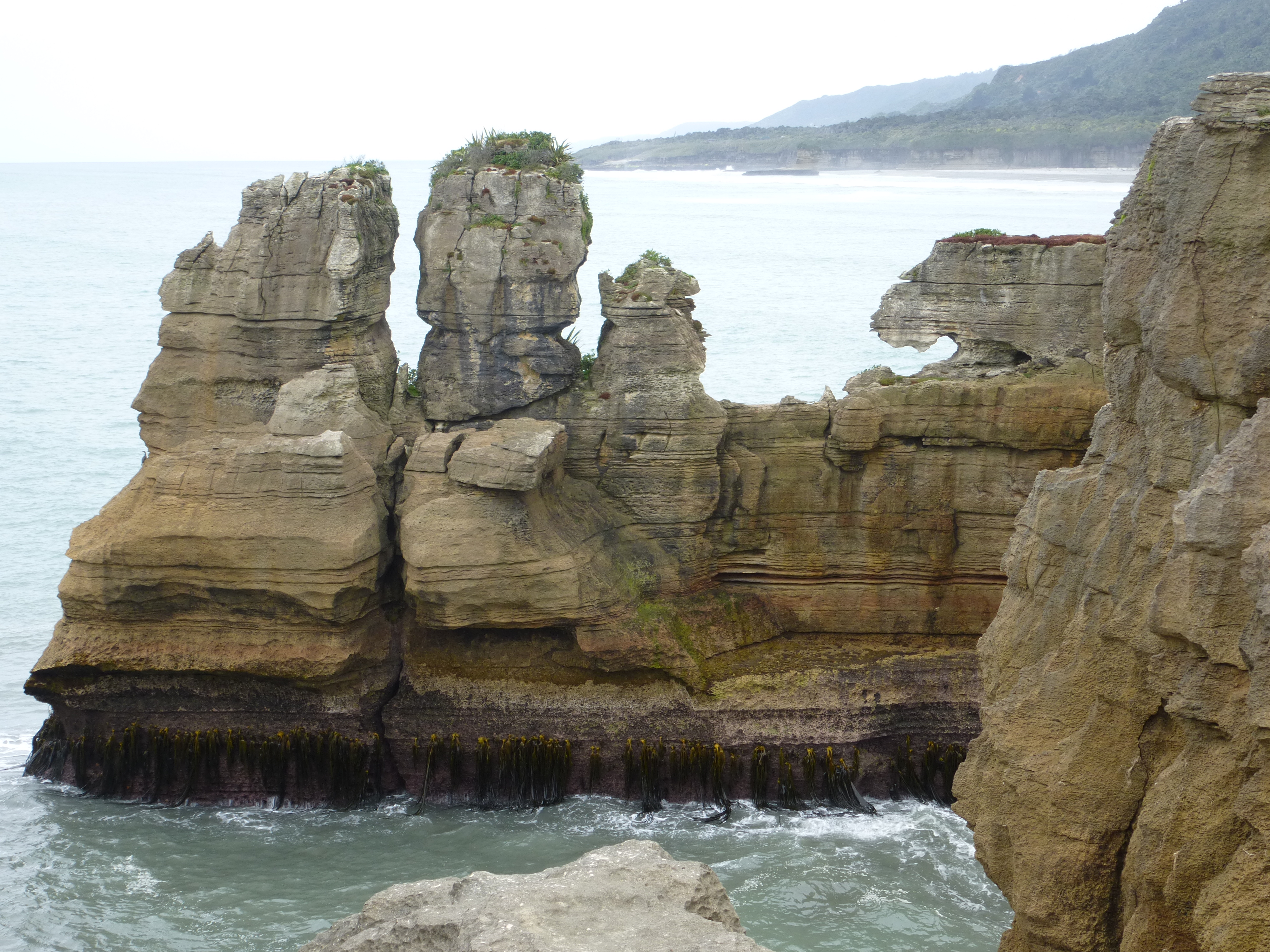 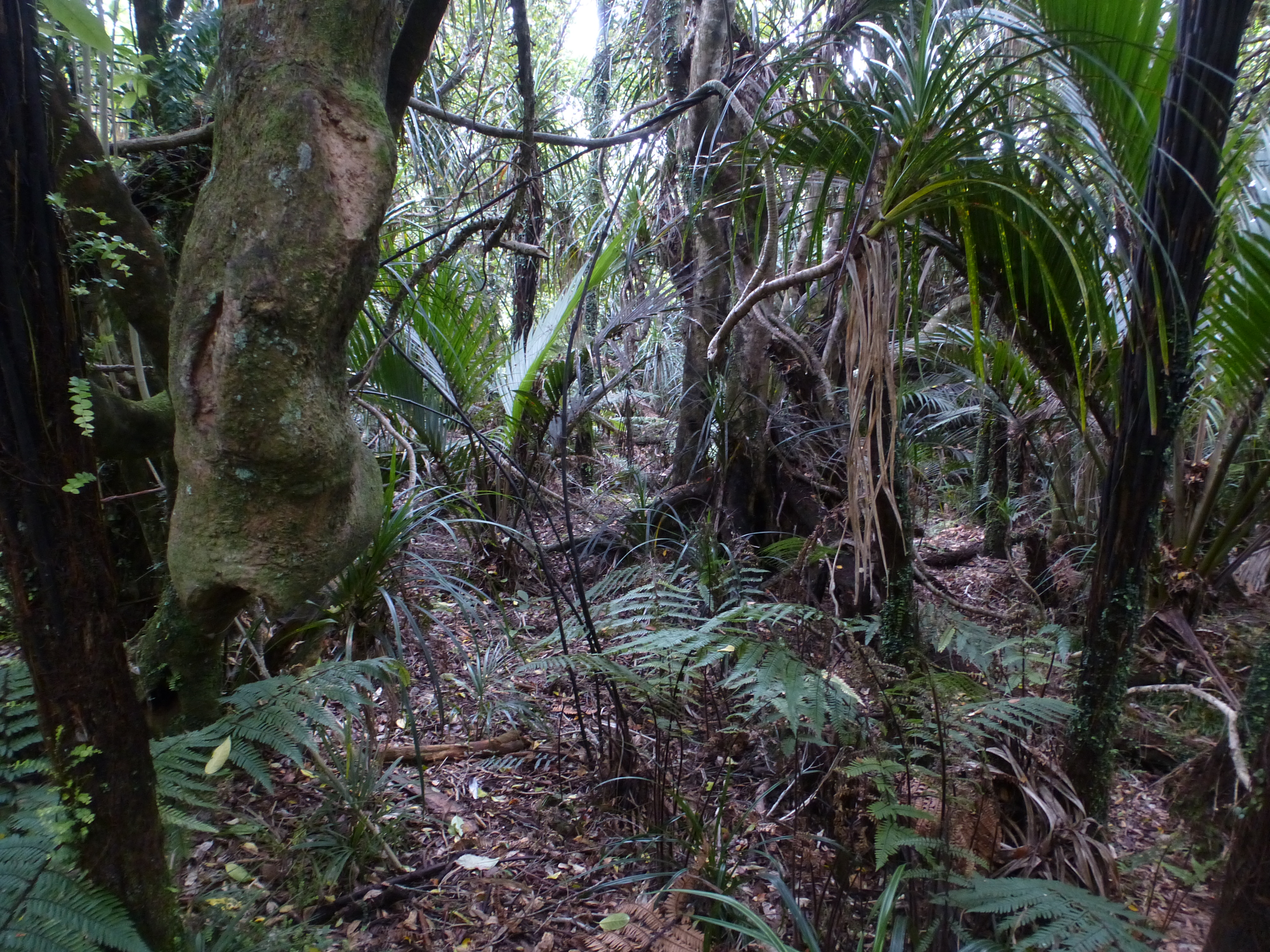 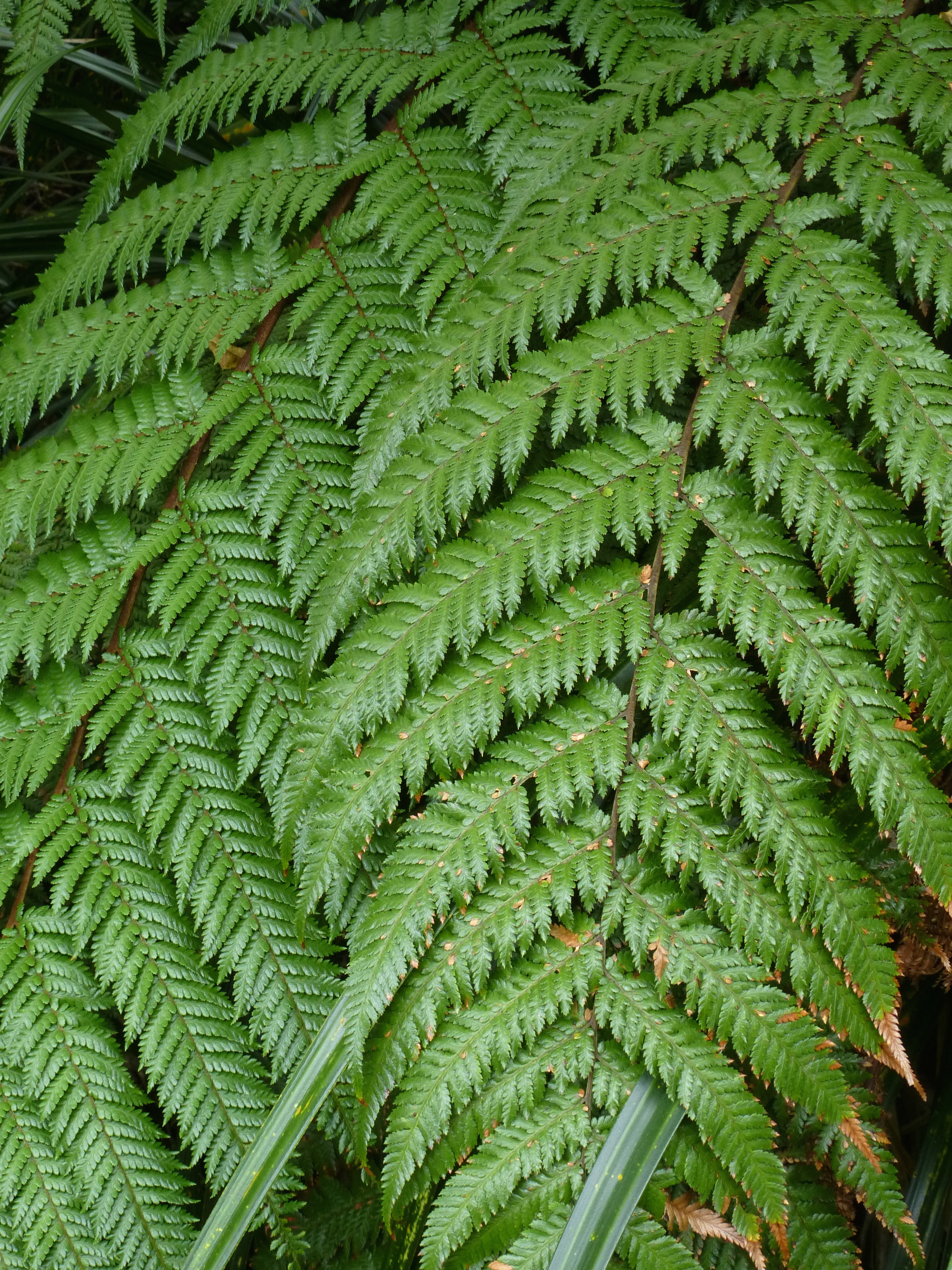 The cabbage tree (Cordyline australis), a monocot endemic to New Zealand but now planted around the world: 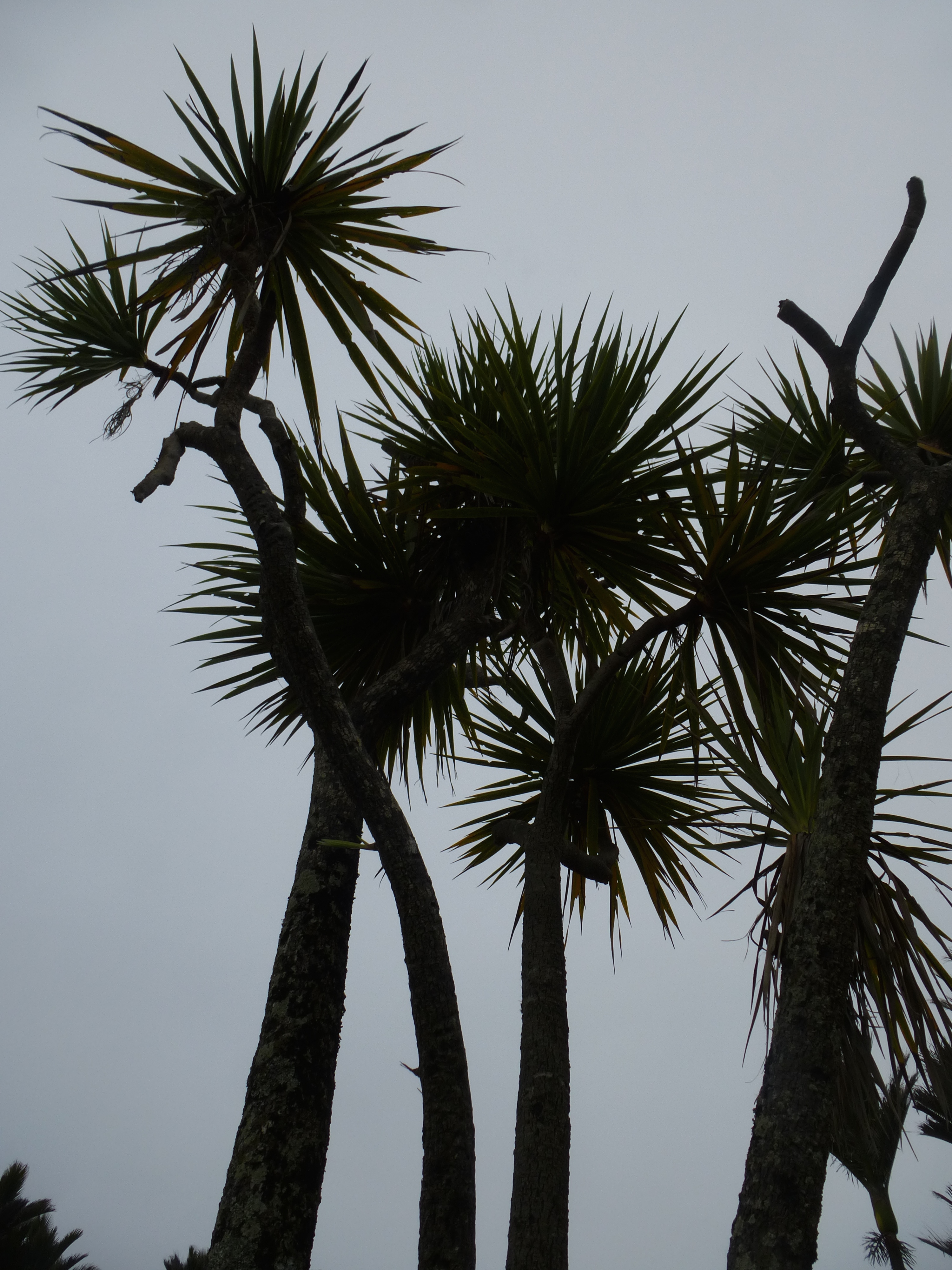 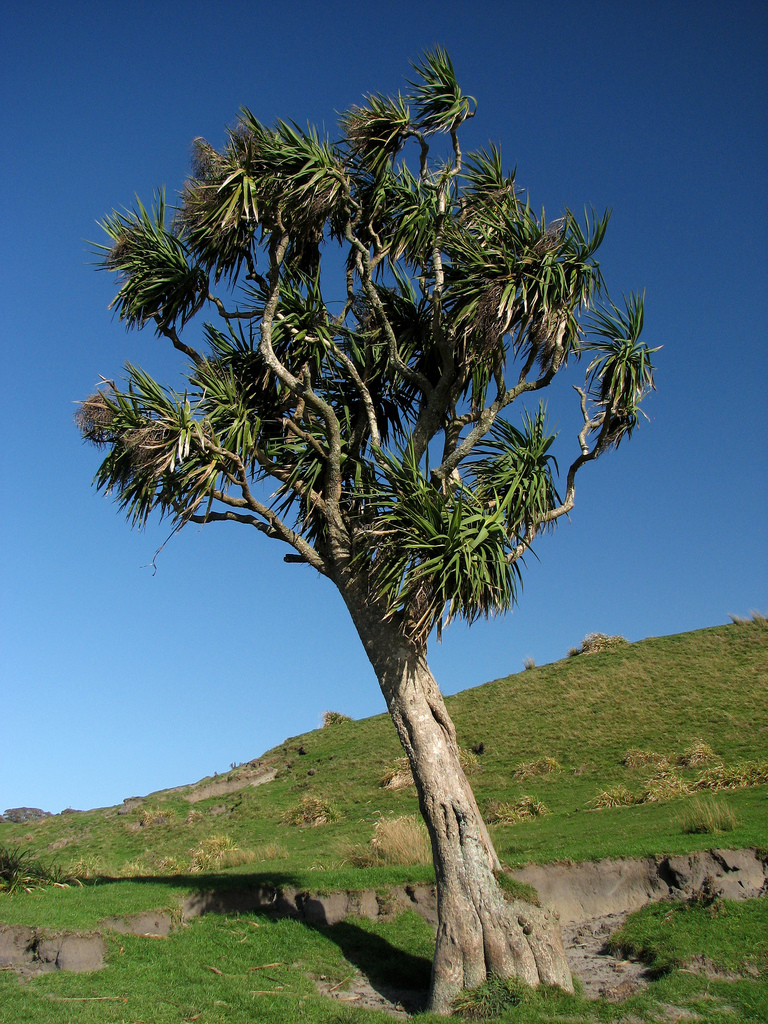 And in the national park visitors center, you’ll find more invasive Australian brush-tailed possum skins for sale. It’s a great pity that these animals must be exterminated to save New Zealand’s unique fauna (they’re cute), but there’s no alternative if we want to preserve the products of millions of years of evolution. It’s either them or the possum! 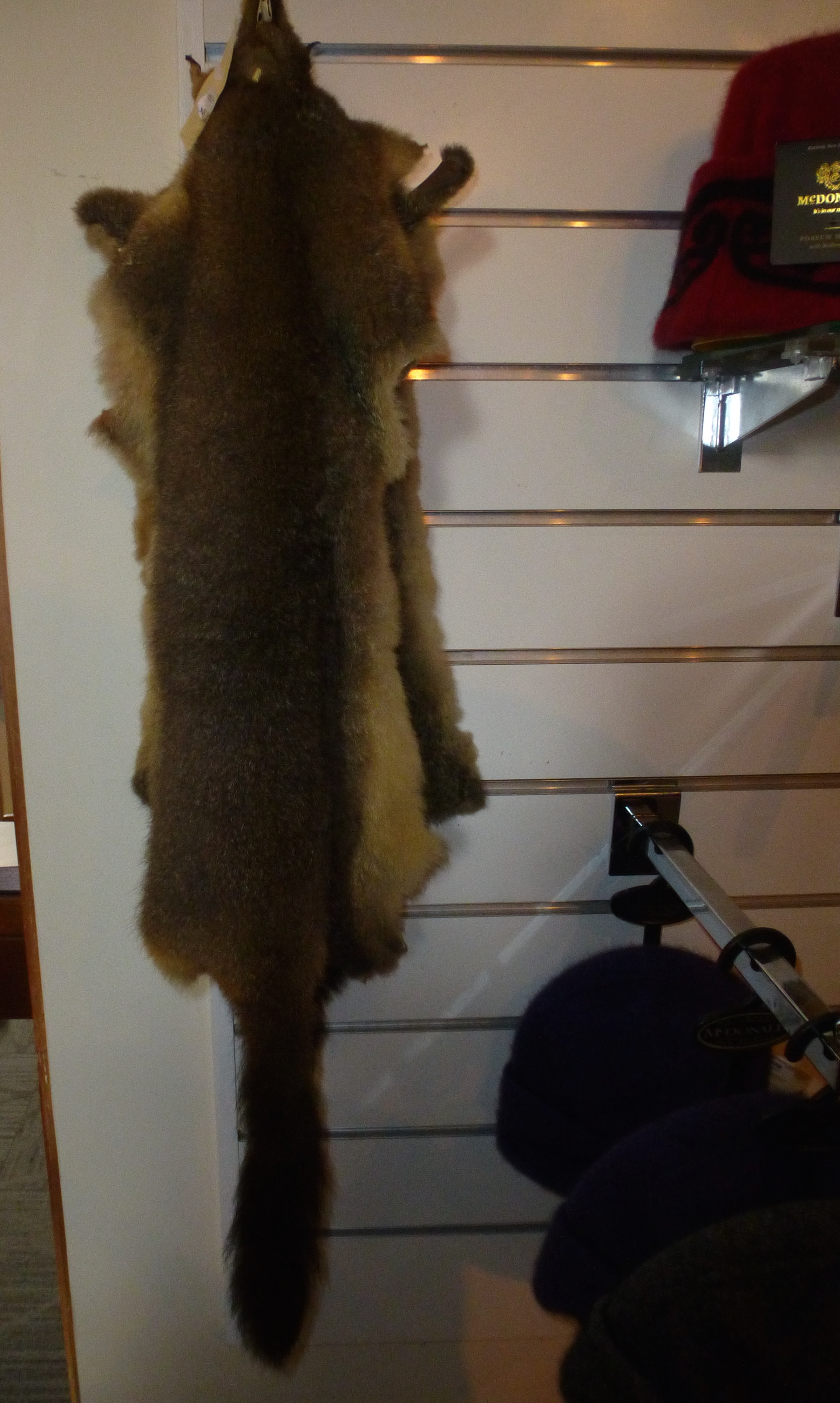 57 thoughts on “Travels in New Zealand: to Nelson via Pancake Rocks”