Tomorrow is the day I head up to Arthur’s Pass from Greymouth to look for keas, the world’s only alpine species of parrot. I’m hopeful that I’ll get to see these remarkable birds, because the pass is where they are most easily found. In preparation, today I traveled from Fox Glacier north to Greymouth, took a room in a backpacker’s hostel (but a real room: I need to spread out and clean up), and bought round-trip bus tickets to Arthur’s pass.

As I said in an earlier post, New Zealand intercity buses are like tour buses: the driver keeps up a constant and informative patter about the history, biology, and geology of the region we’re passing through, often negotiating wet hairpin curves as he does so. And there are one-lane bridges that have to be negotiated—often only a few feet wider than the bus: 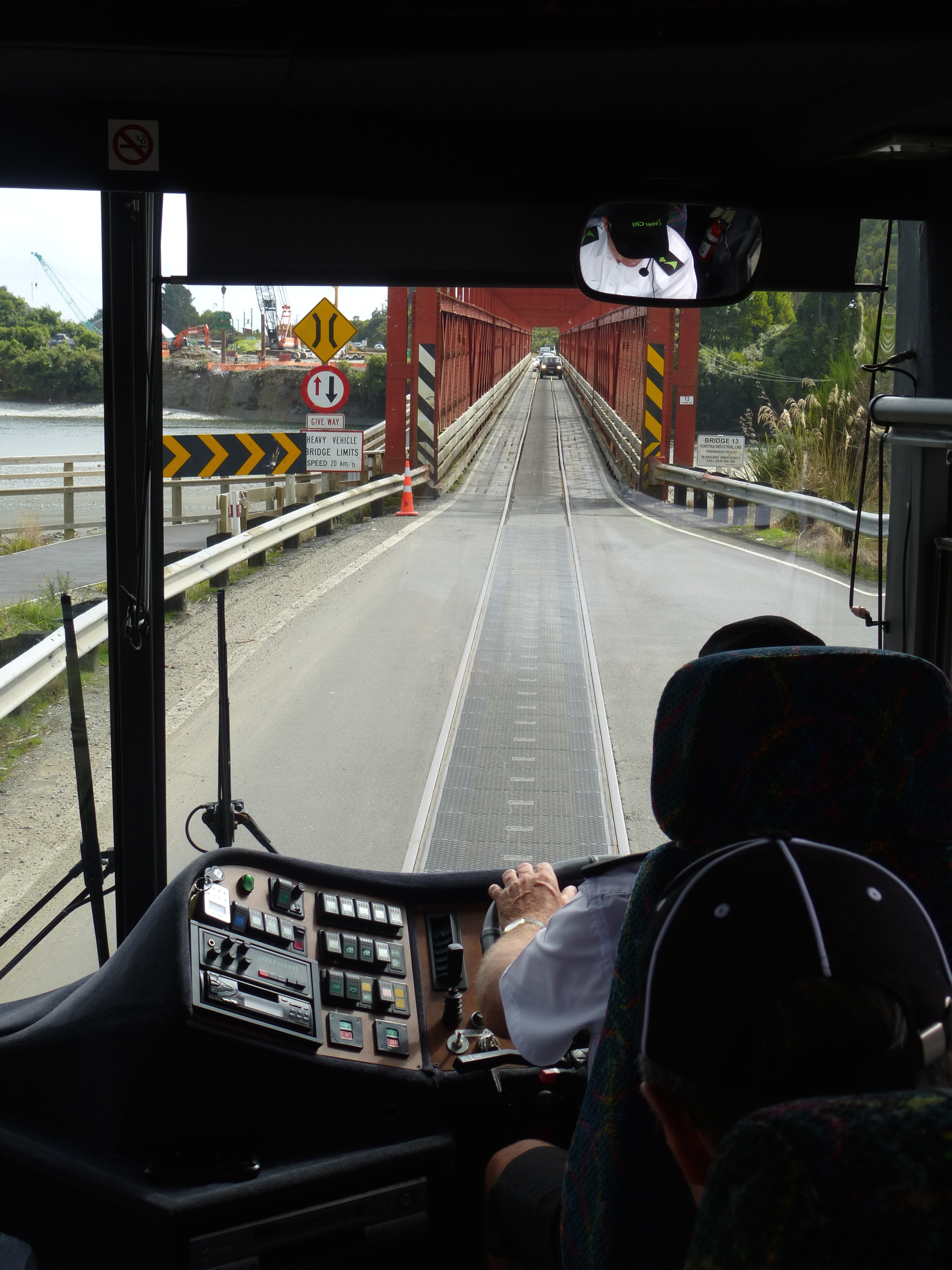 A bit of the lovely scenery on the coastal road north, said to be one of the world’s ten most beautiful highways. I think those are ducks on the lake, but I have no idea which species. 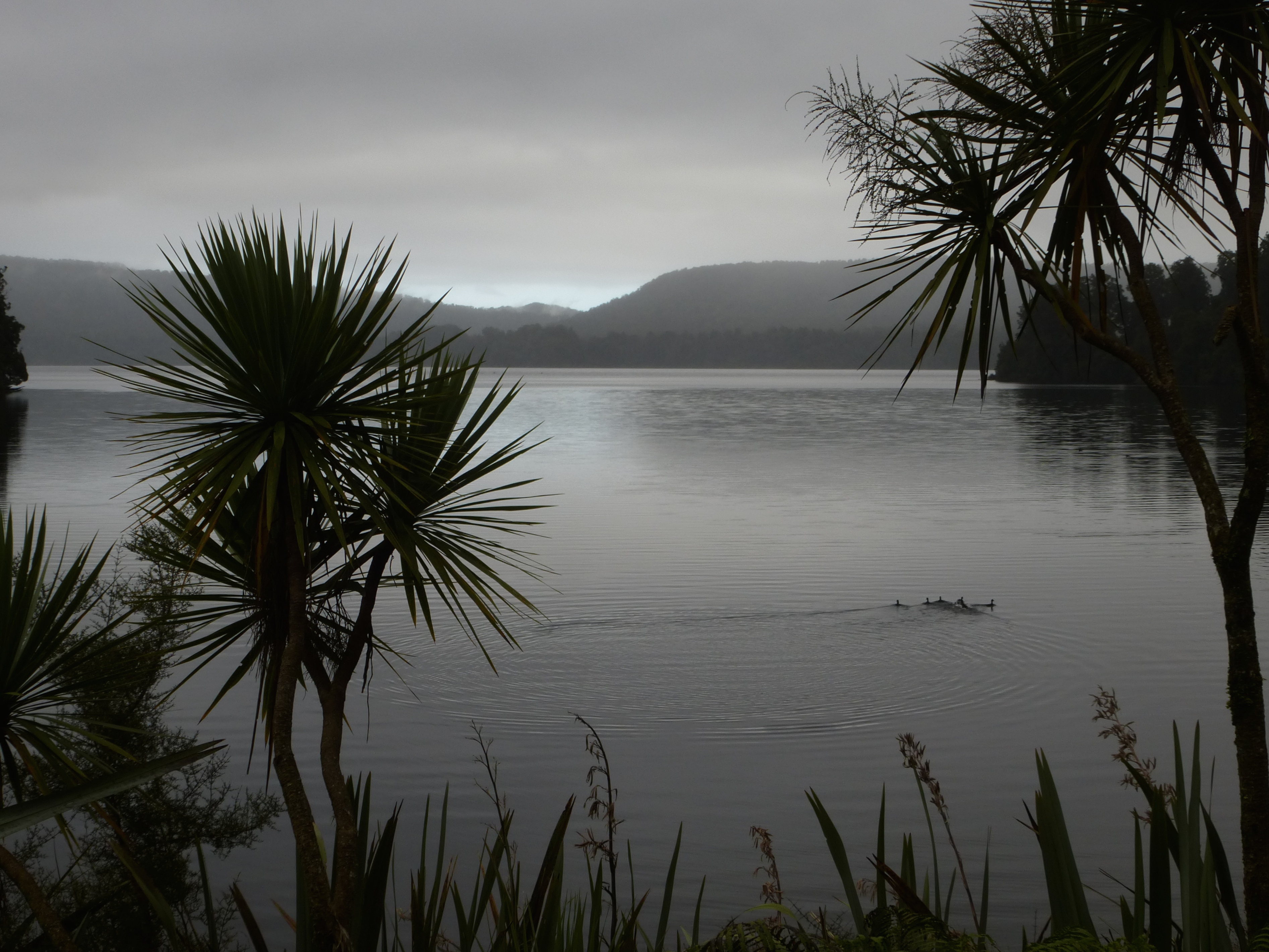 The buses also make frequent stops for food, bathroom breaks, and photo opportunities. One of these was at the lovely little town of Hokitika.  It’s famous for carving and selling the local nephrite jade, called “pounamu” by the Maoris and “greenstone” by the descendants of immigrants. It was much prized by the Maori for its beauty, hardness, and utility. It was made into jewelry, axes, tools, fishooks and clubs (see the Wikipedia excerpt below), and is still carved by hand to traditional Maori designs (as well as modern ones). I visited a store to see the process: 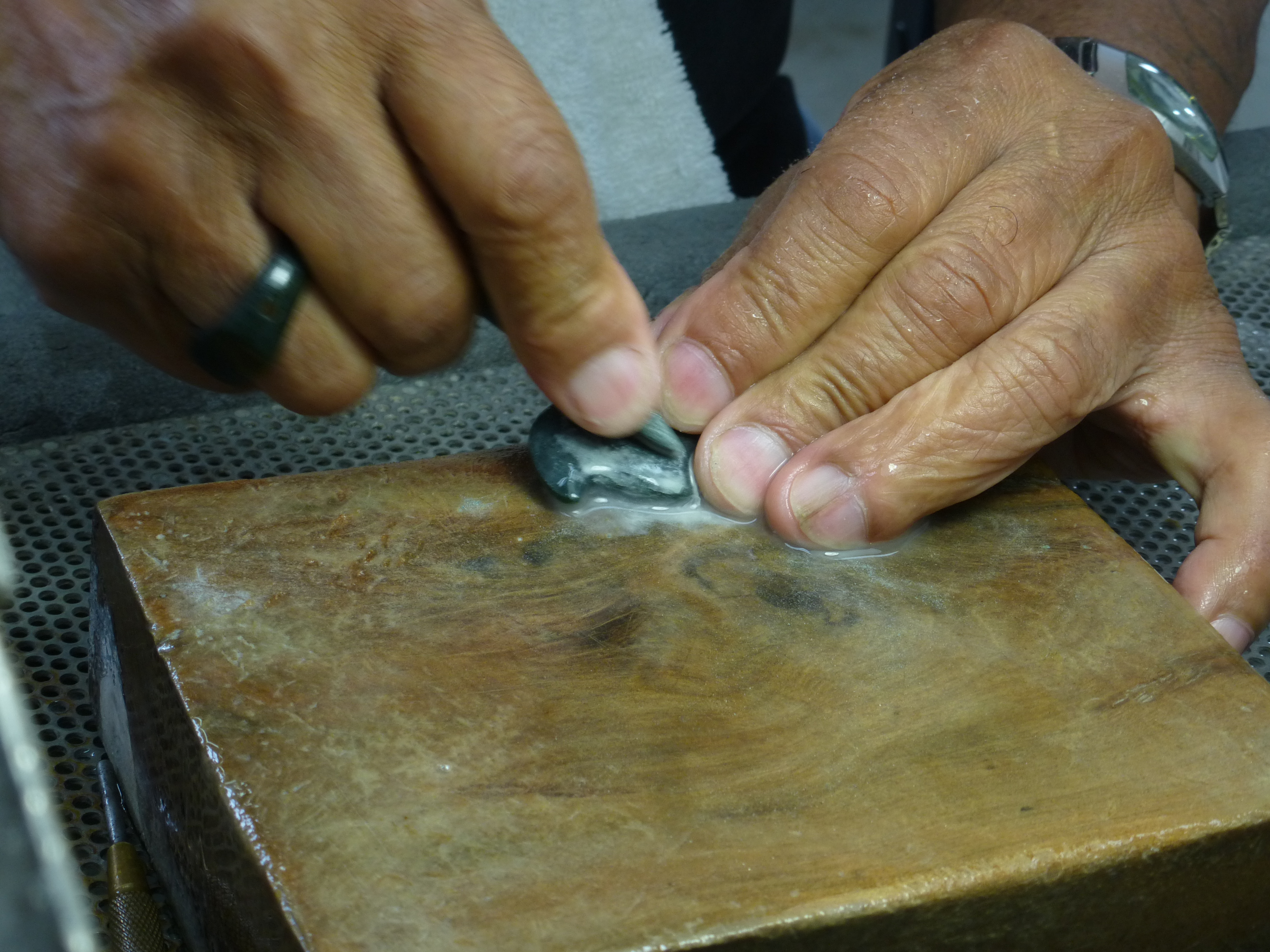 It apparently takes a lot of skill and training to carve these stones, which are found in riverine deposits are are not immediately identifiable as jade (see below; for more information about designs and the stones, go here). 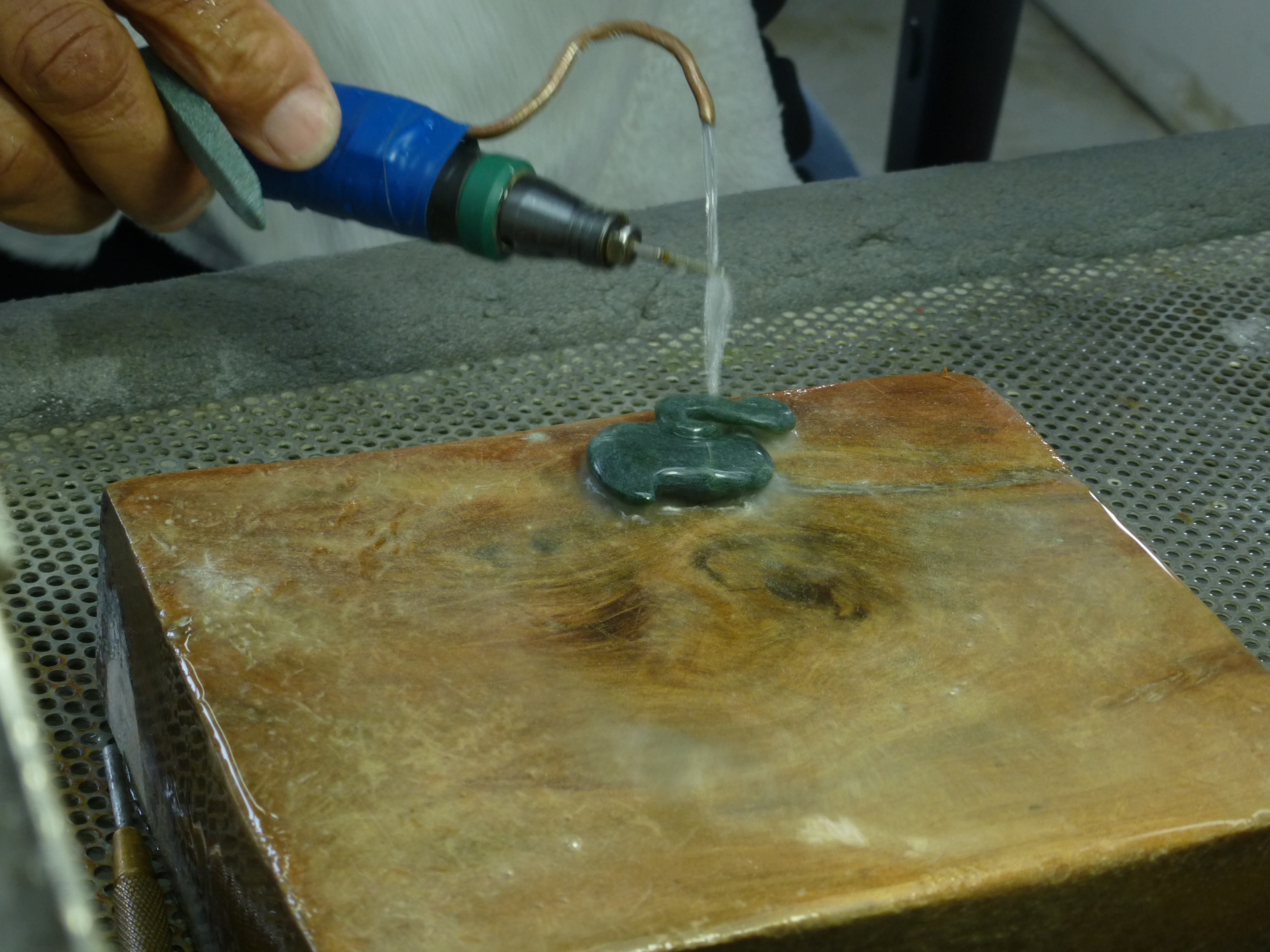 Here’s a bit about greenstone from Wikipedia:

Pounamu plays a very important role in Māoriculture. It is considered a taonga (treasure) and therefore protected under the Treaty of Waitangi. Pounamu taonga increase in mana (prestige) as they pass from one generation to another. The most prized taonga are those with known histories going back many generations. These are believed to have their own mana and were often given as gifts to seal important agreements.

Pounamu taonga include tools such as toki (adzes), whao (chisels), whao whakakōka (gouges), ripi pounamu (knives), scrapers, awls, hammer stones, and drill points. Hunting tools include matau (fishing hooks) and lures, spear points, and know poria (leg rings for fastening captive birds); weapons such as mere (short handled clubs); and ornaments such as pendants (hei-tiki, hei matau and pekapeka), ear pendants (kuru and kapeu), and cloak pins. [7][8] Functional pounamu tools were widely worn for both practical and ornamental reasons, and continued to be worn as purely ornamental pendants (hei kakï) even after they were no longer used as tools. 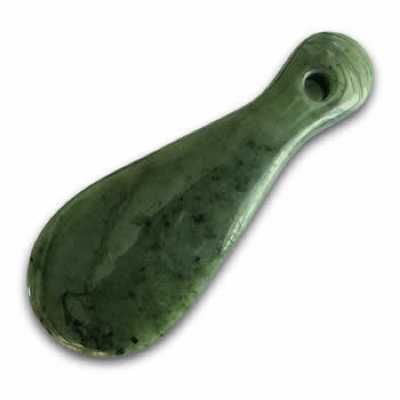 I love the traditional design below, which requires the carver to open up spaces between the bits of jade. Some information from Global Culture:

The Maori twist or Pikorua resembles two intertwined pikopiko ferns. Pikopiko is a pale green new-growth fern frond that thrives in shady, damp areas of the New Zealand woods and Rua is the Maori word for the number two.

The entanglement has no beginning or end which refers to an eternal bond between two autonomous entities. These entities might be two persons. The pikorua symbol shows how individuals sometimes go their own way on their path of life but always come back together because of their strong bond hence the description of pikorua as “The path of love and life”. Another common description because of its meaning is ‘two person friendship pendant’. 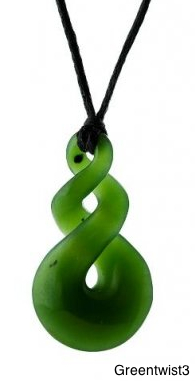 I’ve now landed in the town of Greymouth, which I quite like. It’s an old gold and coal mining town (population about 14,000), and has a sleepy atmosphere with old buildings. Here’s part of the downtown: 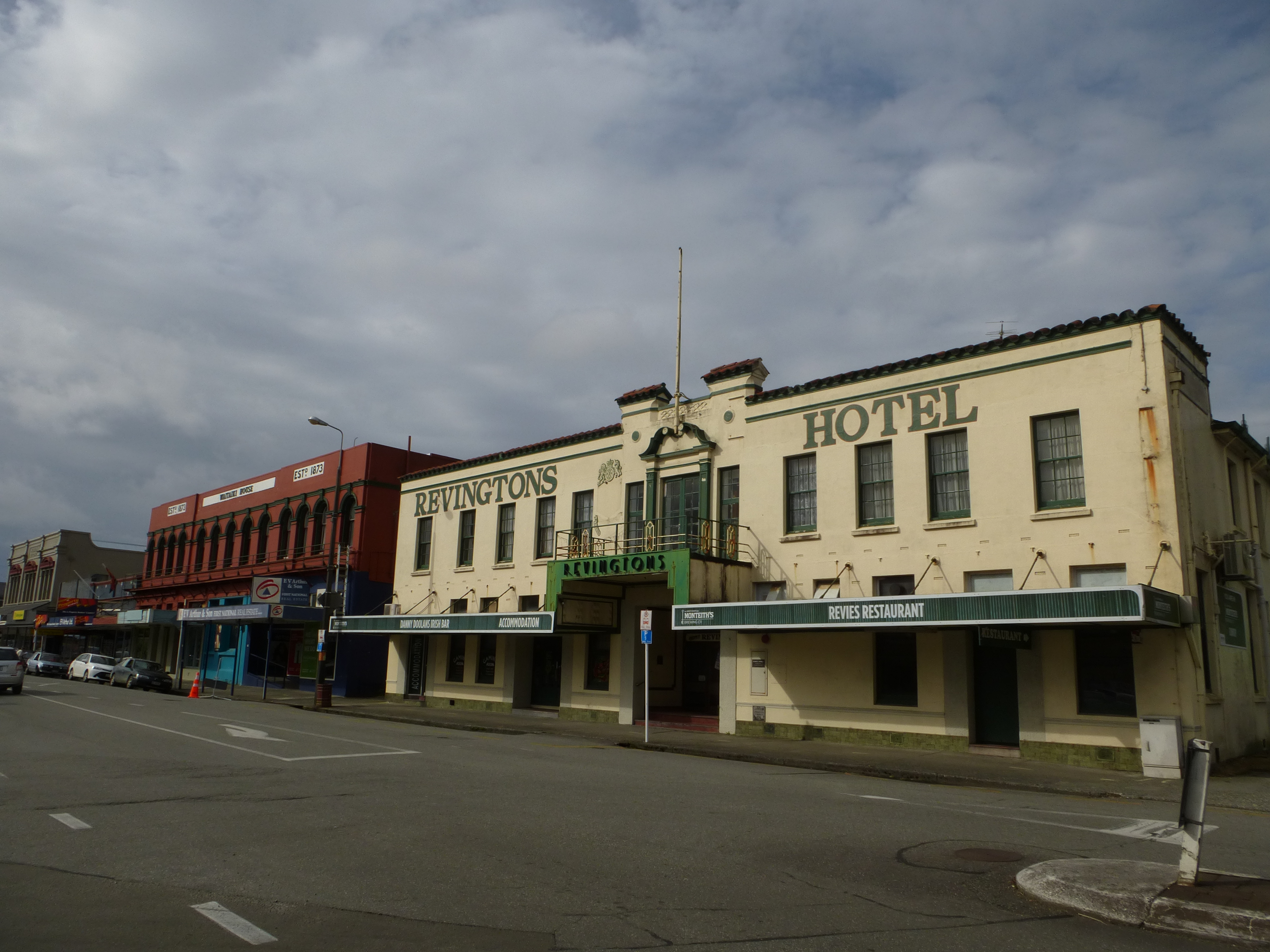 Greymouth is also the terminus of one of the world’s most famous railway journeys: the 4.5-hour “TranzAlpine Service” cutting through the Southern Alps from Greymouth to Christchurch and back. A fire in the forest in February closed it for nearly six weeks, but today, as my bus was pulling in, the first train on the restored line was pulling out, and the locals were very happy. Here’s the station: 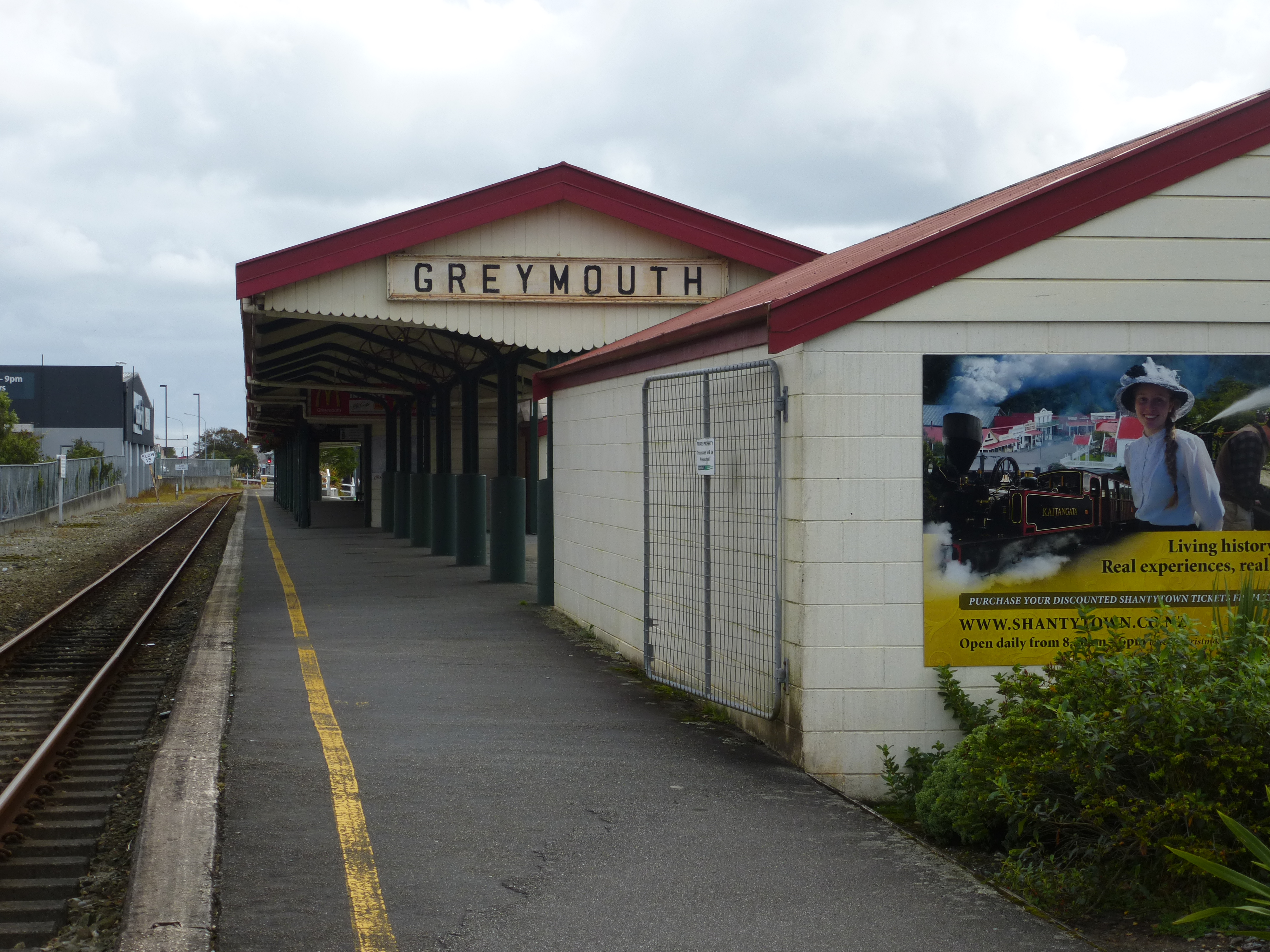 There are several large memorials made of huge blocks of pounamu: 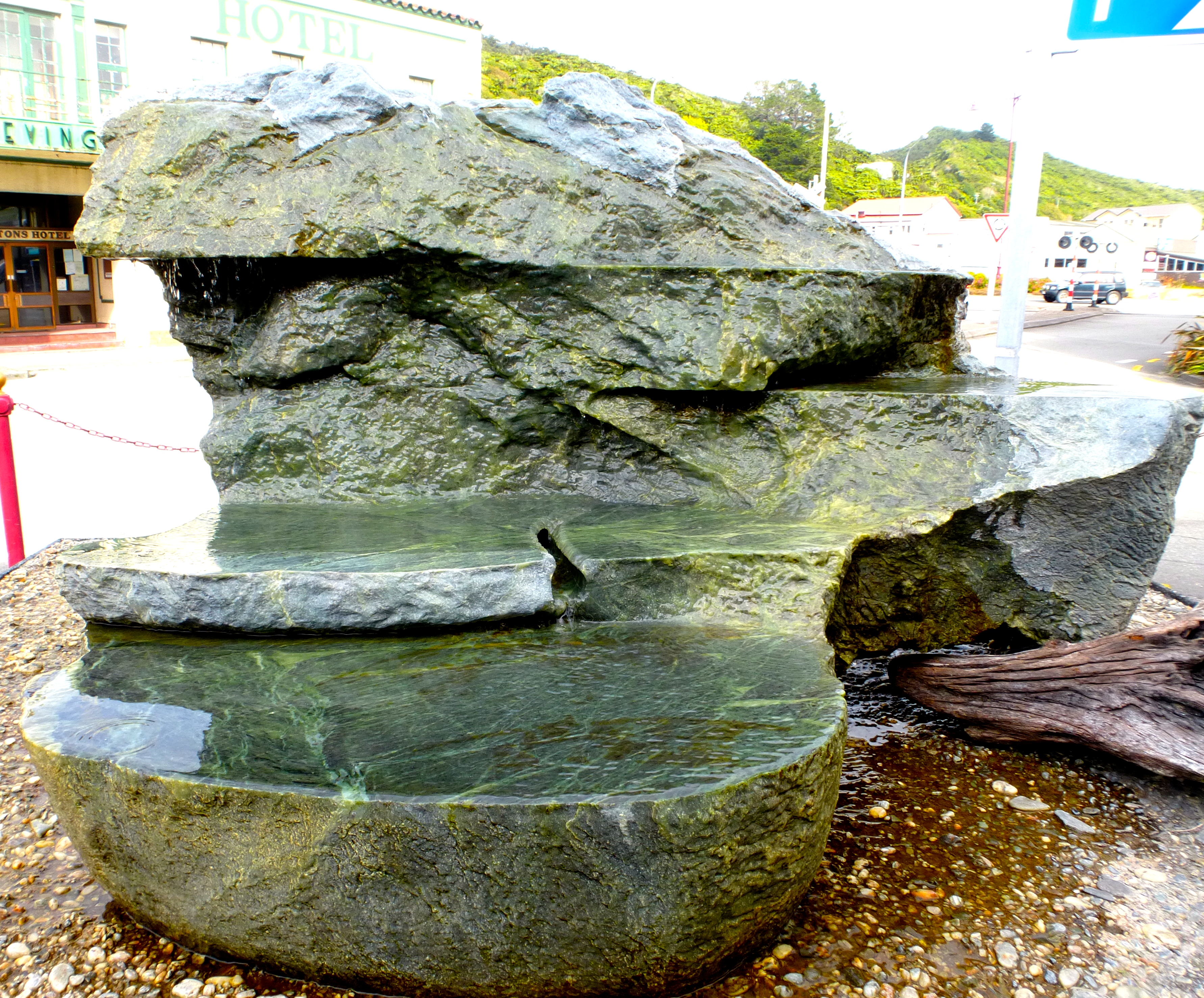 This large stone shows that the green jade interior is hidden until the stone is cut open: 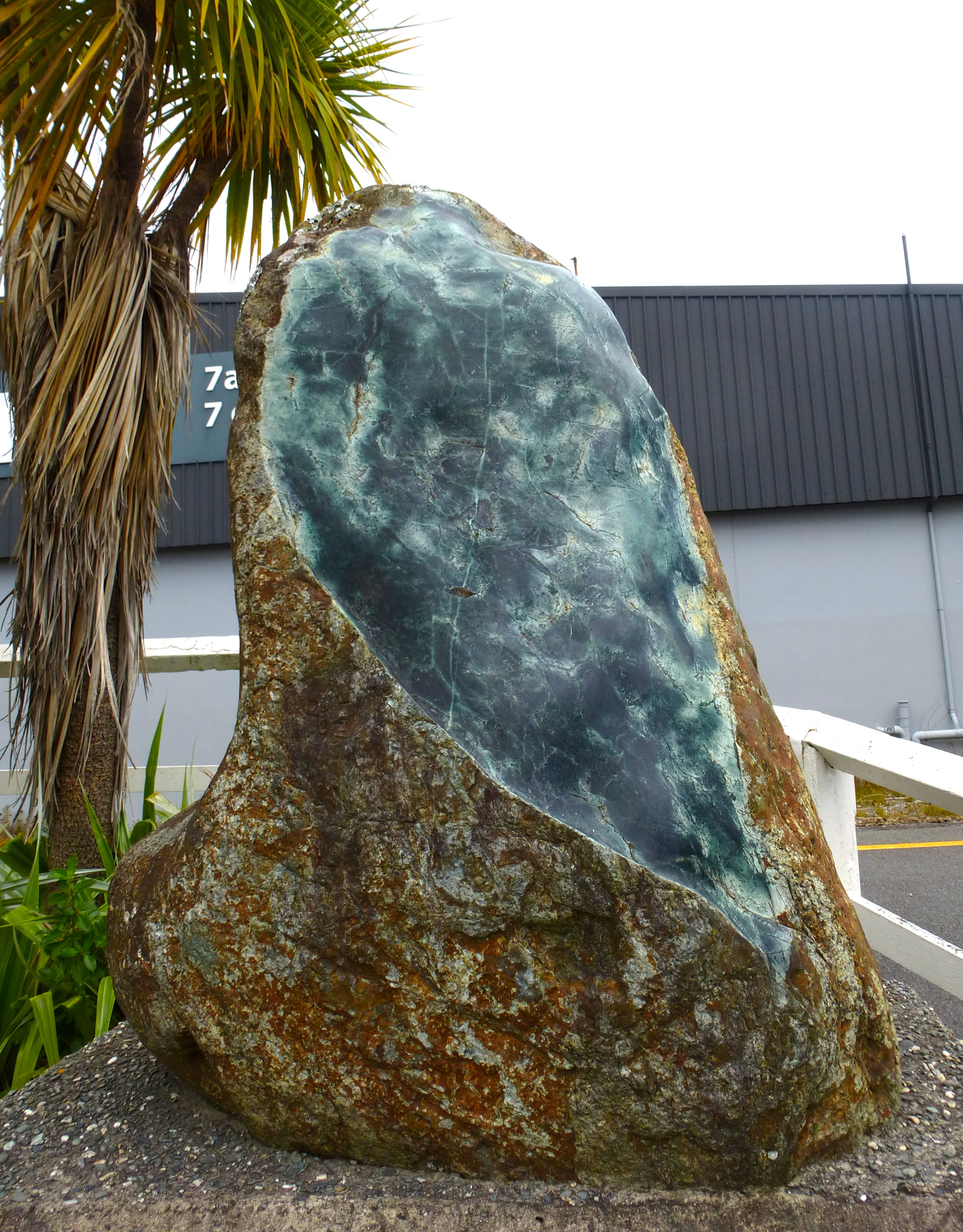 Dinner at a local cafe: turbot and chips with a local cider. The cider was about 6% alcohol, and I have to admit I was a bit tipsy after the meal. The turbot was excellent. 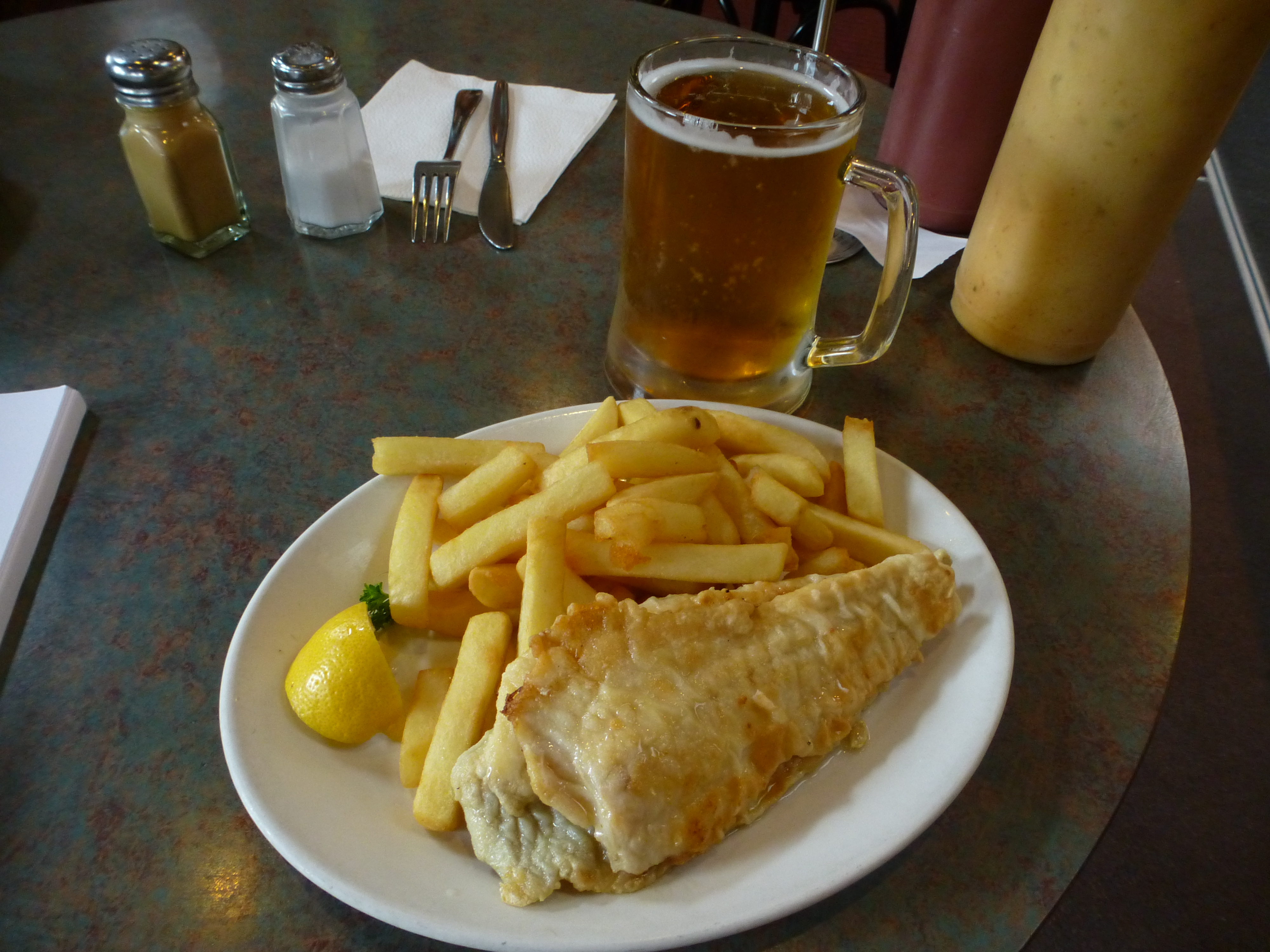 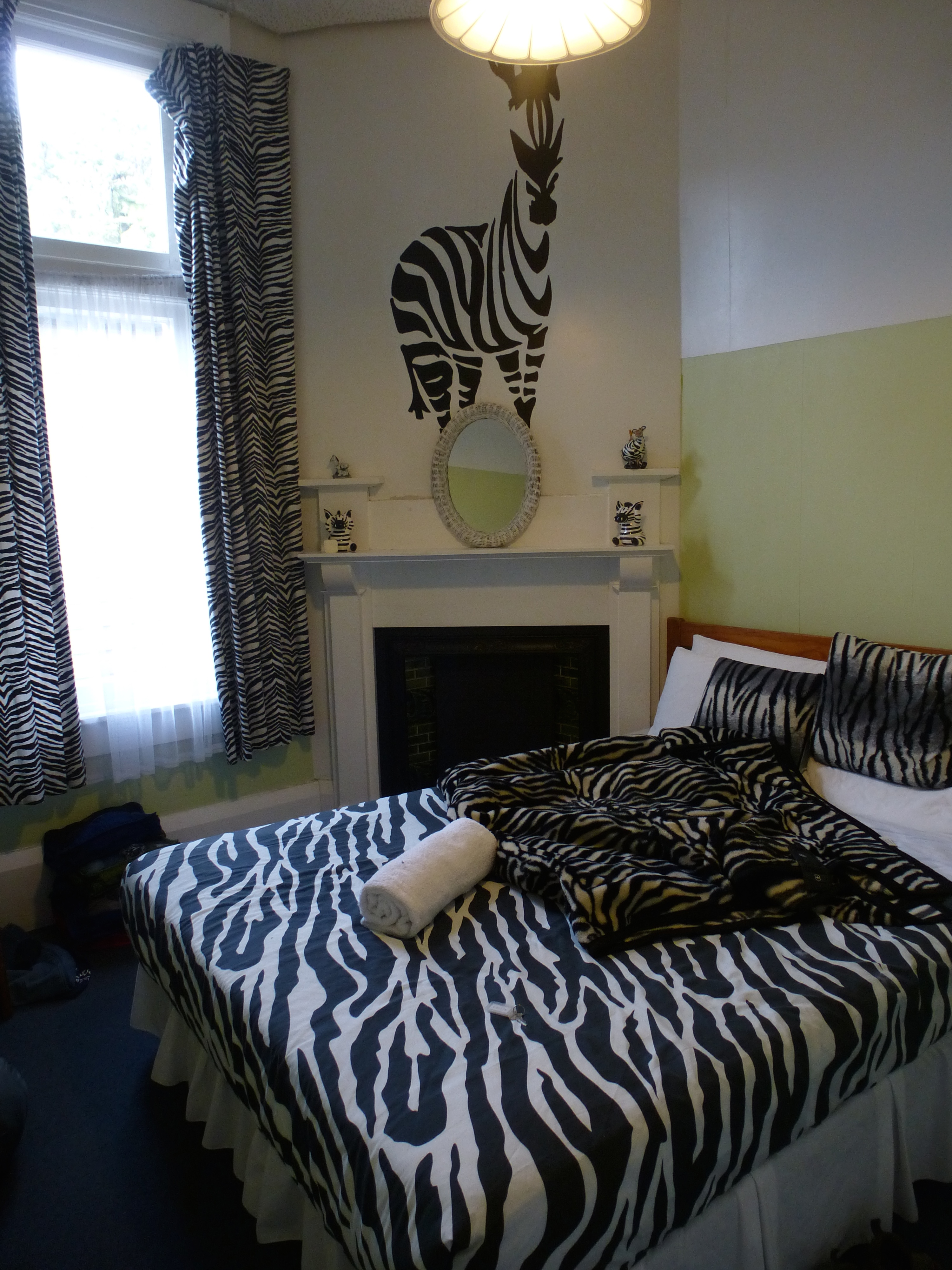 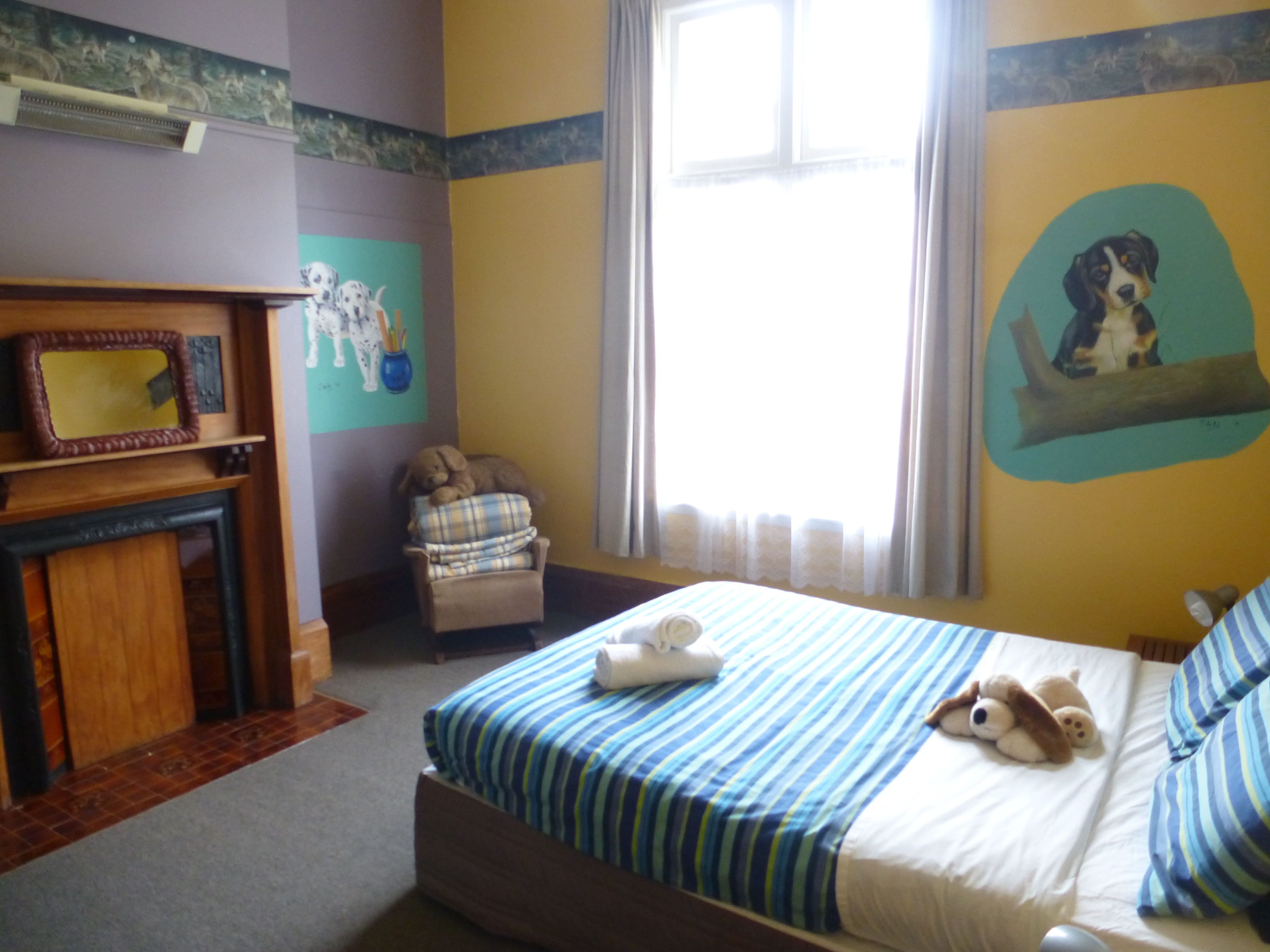 The friendly resident d*g. He came to my door but wouldn’t cross the threshold: obviously well trained. 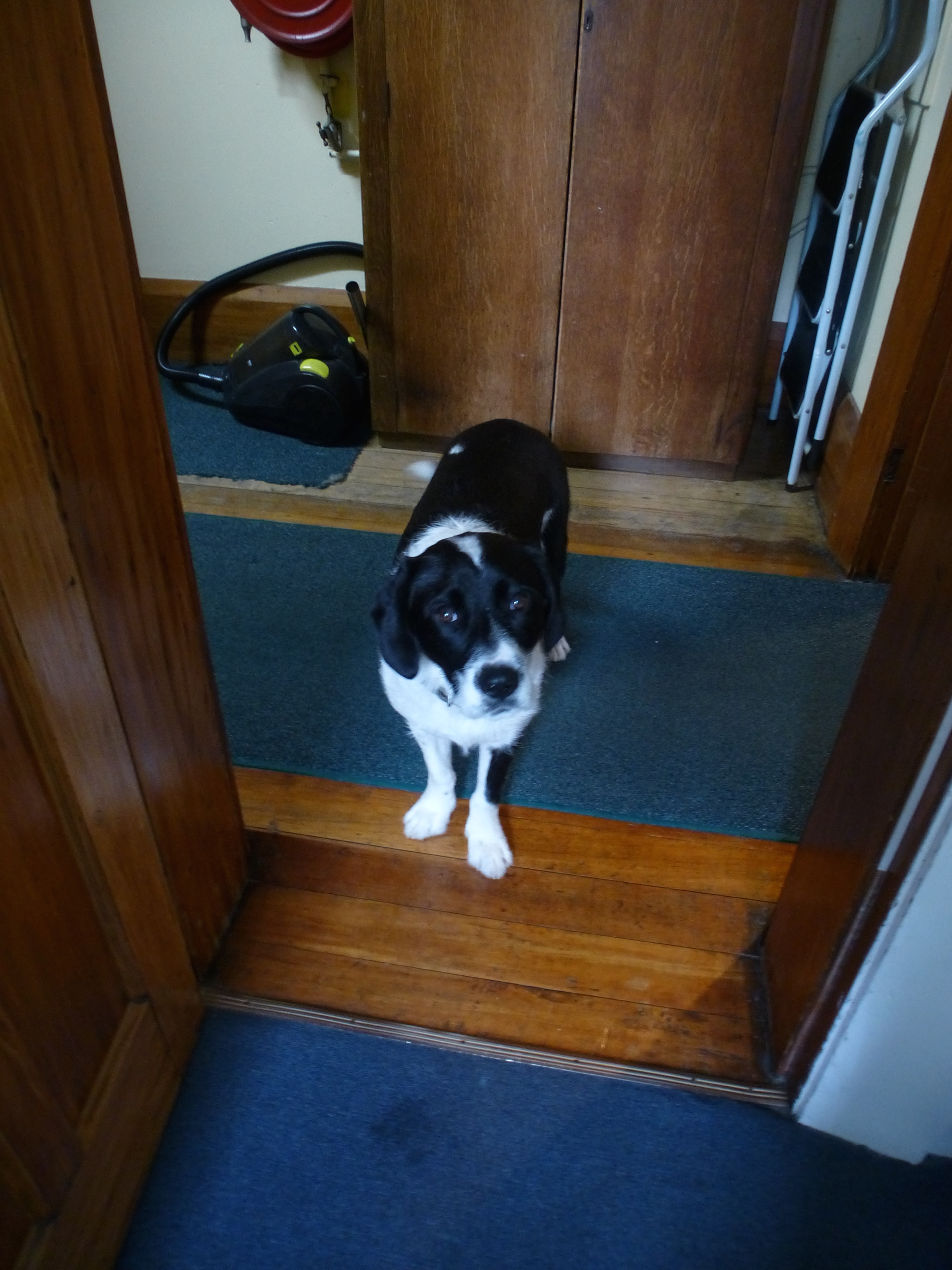 I went to the grocery store to stock up with provisions for my all-day trip tomorrow, and found that Weetabix, the favorite cereal of my biologist friend Andrew Berry, had lost a vowel and gained a hyphen down under. Here, then, are Weet-Bix, whose photo I display for Andrew (as a Brit, he knows of this name change and mocks it). (UPDATE: Andrew tells me that the Aussie product, Weet-Bix, is actually the original and Weetabix is a copy in Blighty.)

Andrew thinks that Weetabix must be eaten in pairs, and yells at me when I visit his house and have three at a time, which seems to me the optimal number. . . 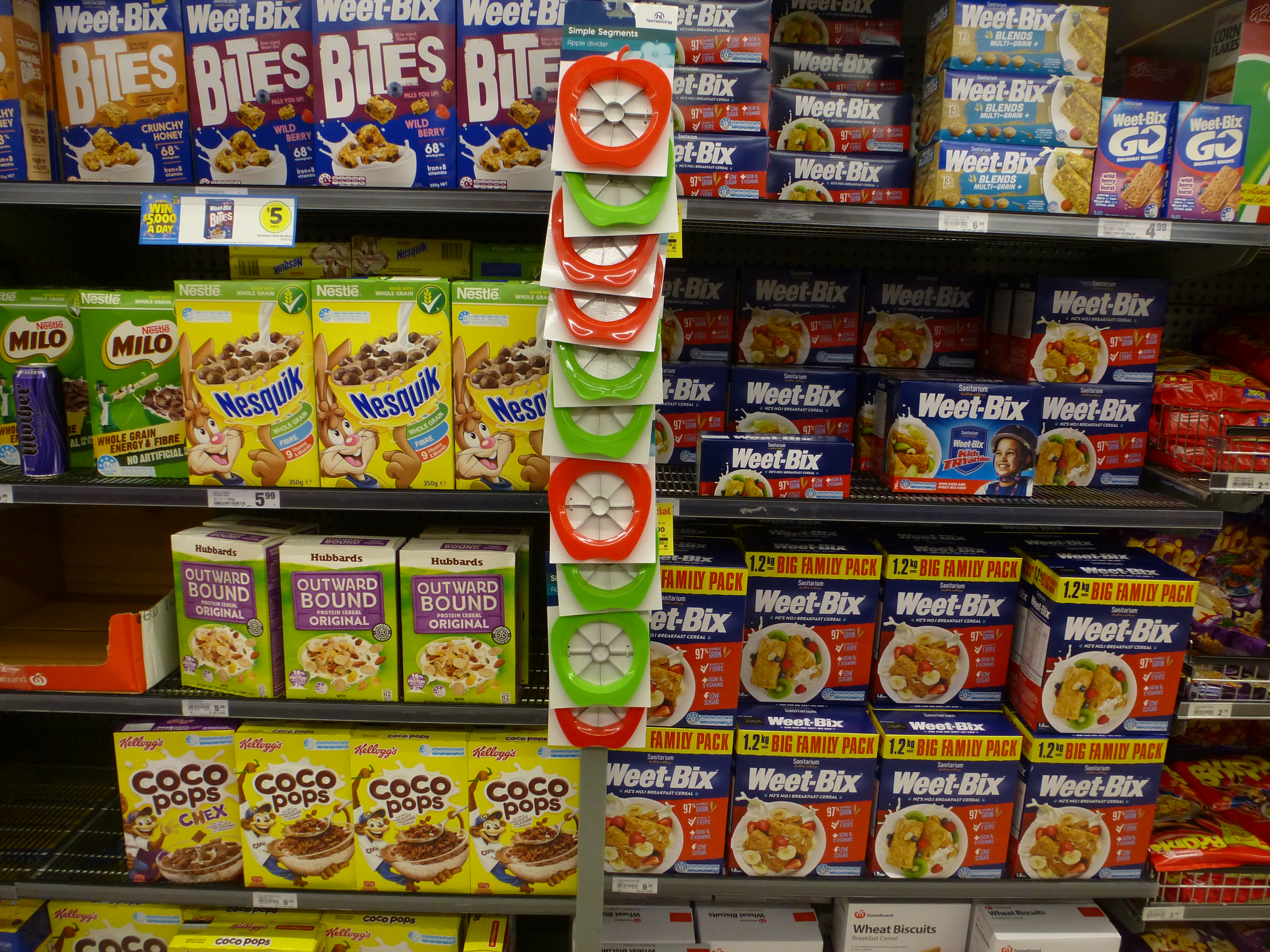 Finally, a sad ad for a lost cat, which hung at the entrance of the store. Poor kitty–I hope they find it! 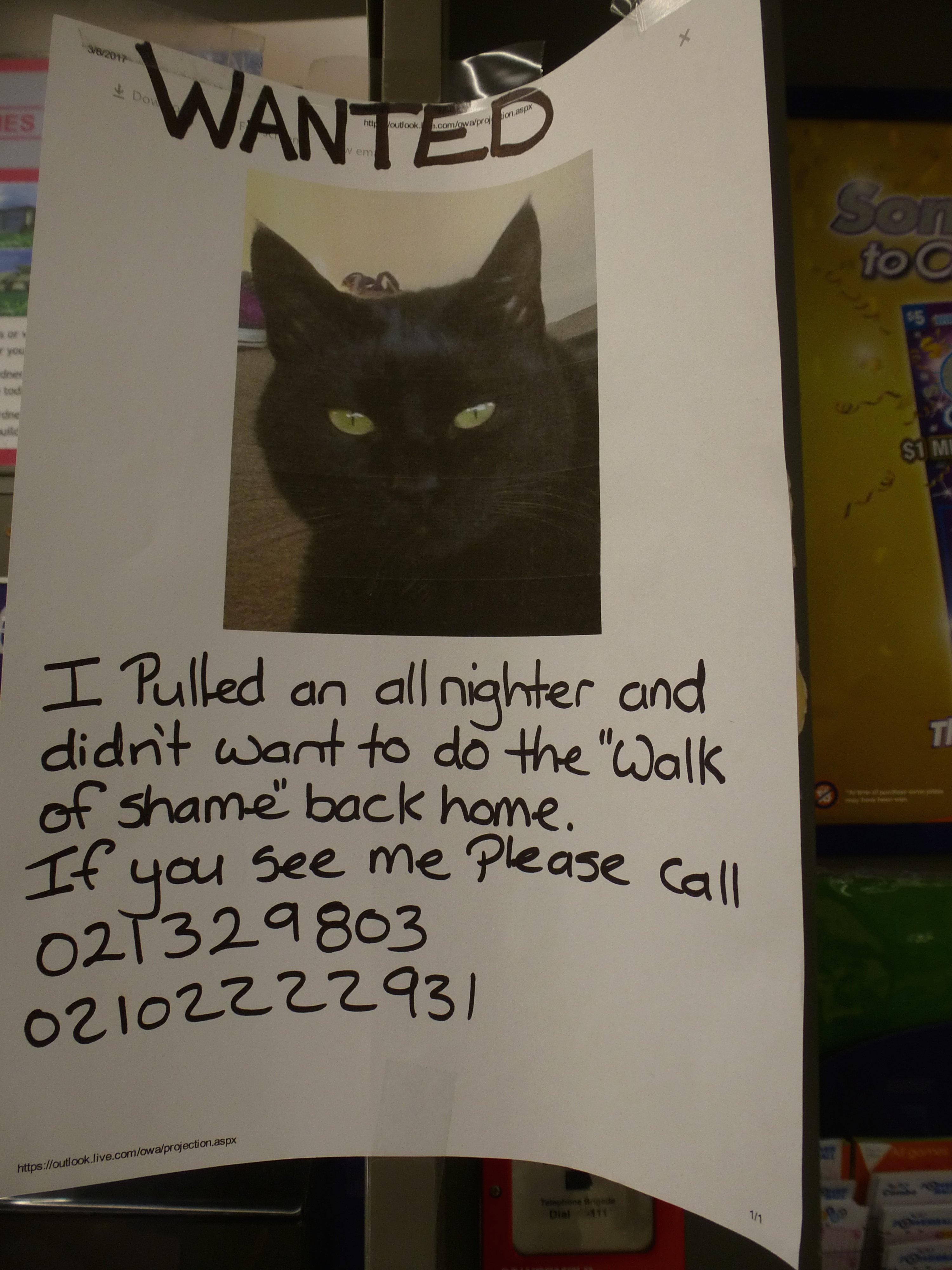 Finally, my goal for tomorrow: Kea or Bust! (Several readers have sent me links to new National Geographic and Atlantic articles about how the kea has an infectious “laughter”—a play call.

Here’s an Attenborough segment on keas from BBC Earth. You’re not supposed to feed them, so I won’t. But I hope to get up close to them, as they’re fearless and inquisitive (“cheeky” is an adjective frequently applied): 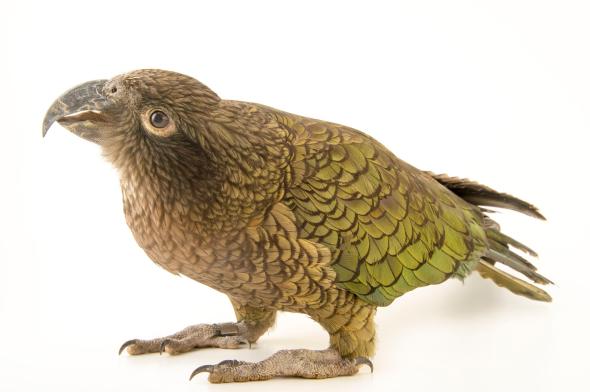 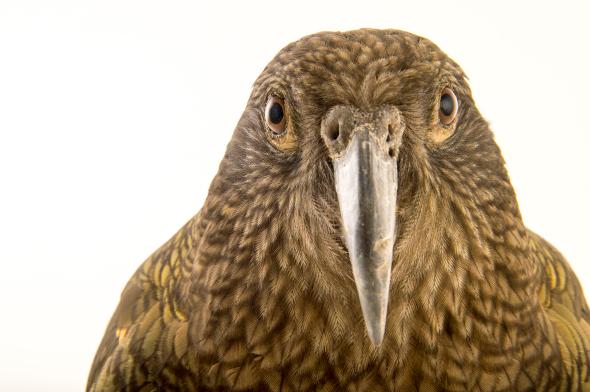 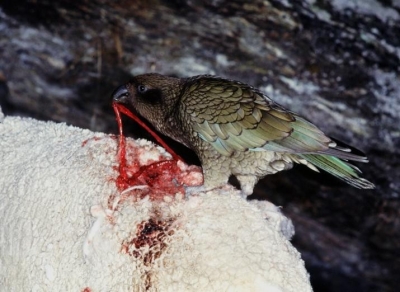 50 thoughts on “The quest for the elusive kea: staging and preparation”