Today (yesterday when you read this, though remember that if you’re in the US or UK, it’s tomorrow already!), we toured the environs of the small (population 300) town of Glenorchy, about 45 km north of Queenstown. Our first stop was the beginning of the Routeburn Track, a very famous 32-km (usually 3 day) hike through the southern Alps. Kevin and I (see Kevin’s previous two photo contributions here) just did the first hour up the track, as we were doing a general tour of the area.

It rained during the night, and was still very overcast at dawn, but later the clouds broke up completely and now (4 pm) it’s completely sunny and clear.  This is the view from Kevin’s deck at dawn. 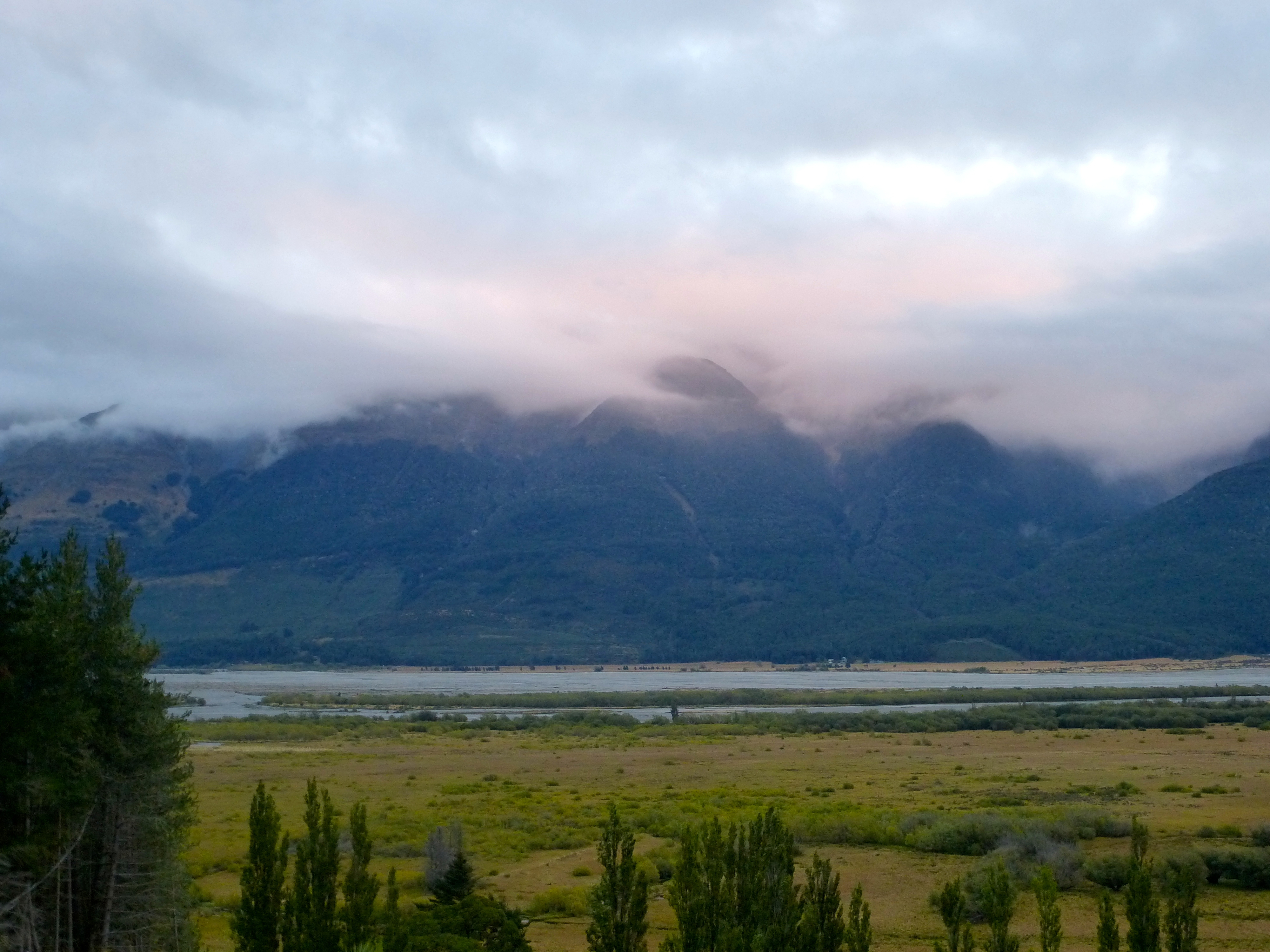 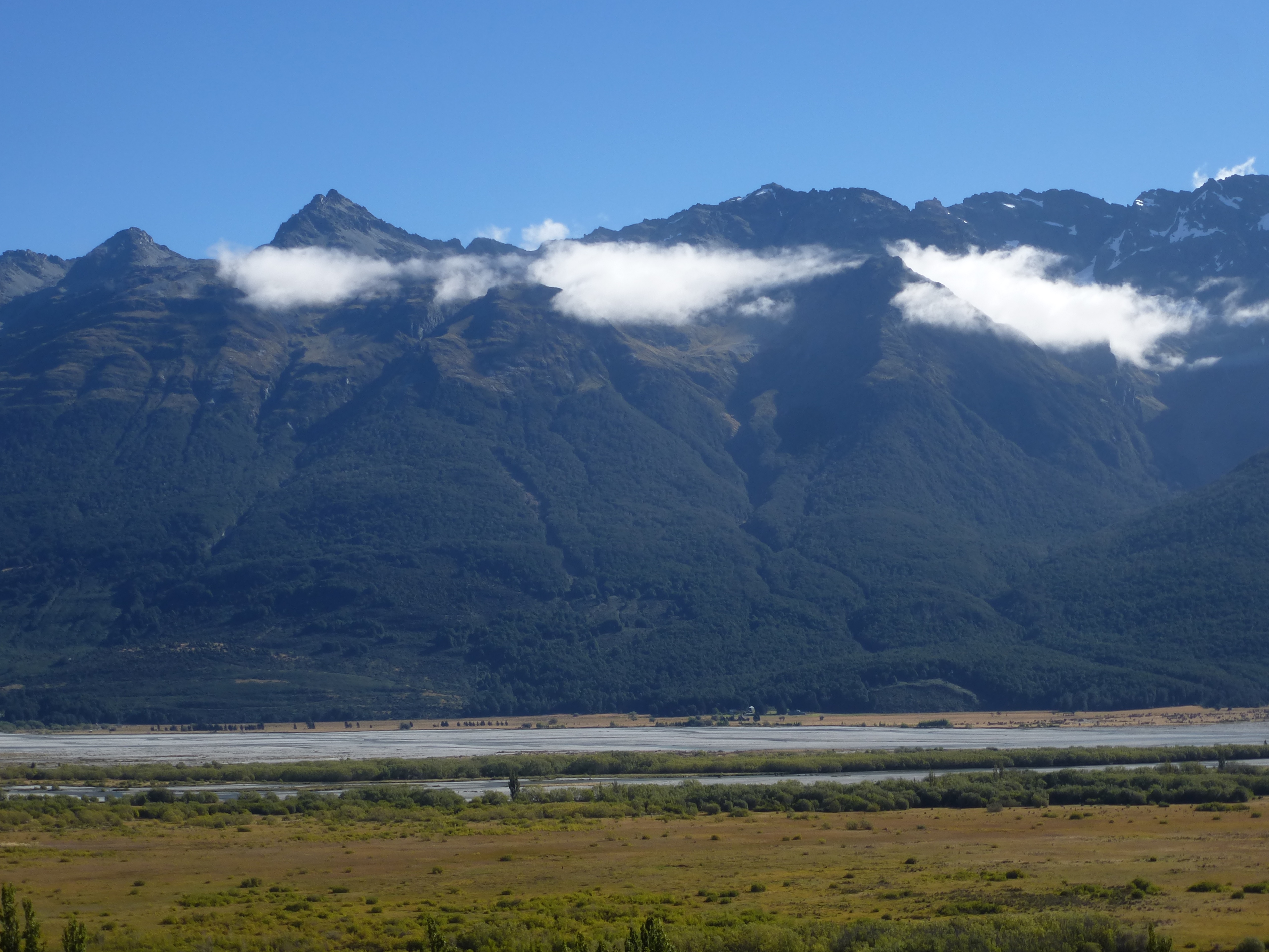 The beginning of the Glenorchy end of the Routeburn Track: 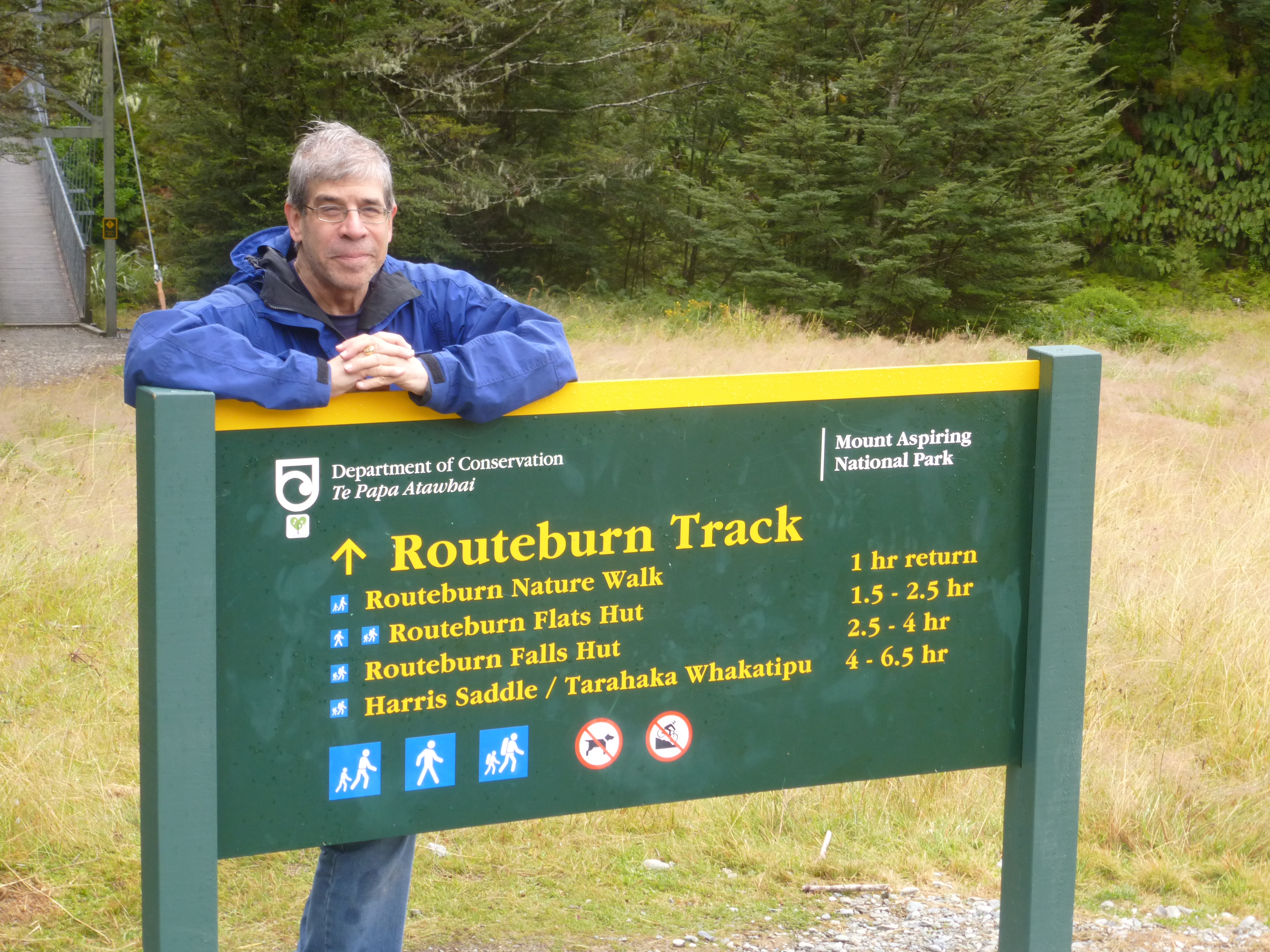 There’s a small exhibit showing the birdlife of the park at the entrance; many of the endemic birds are endangered—often by introduced Australian possums and by stoats. They poison and trap the predators to protect the birds, but many are declining or on the edge of extinction, including the Mohua or yellowhead (Mohoua ochrocephala) shown on the poster: 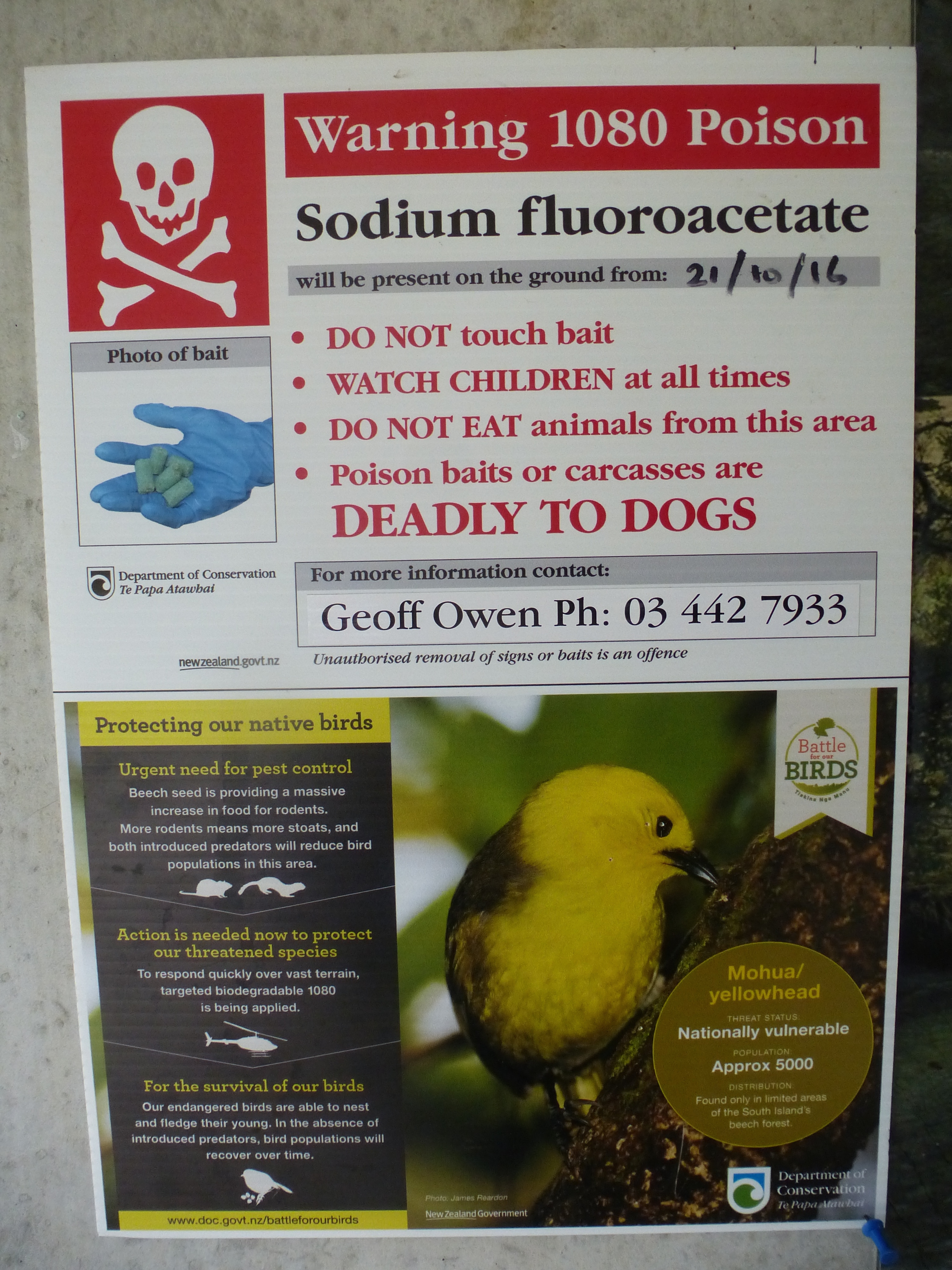 It’s mossy and wet for the first part of the track, even now in the dry season. No wonder this area was used in the film “Lord of the Rings”: 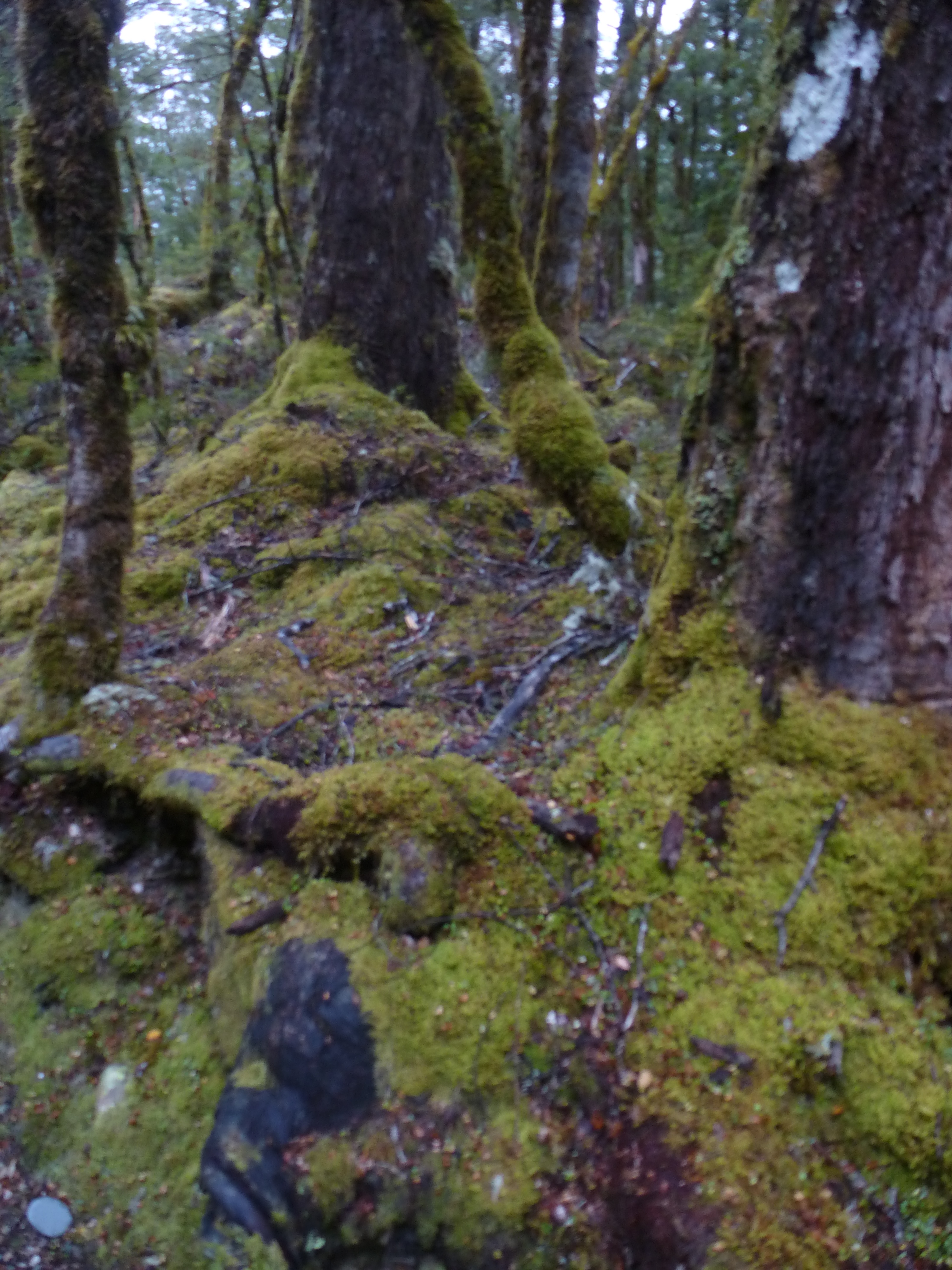 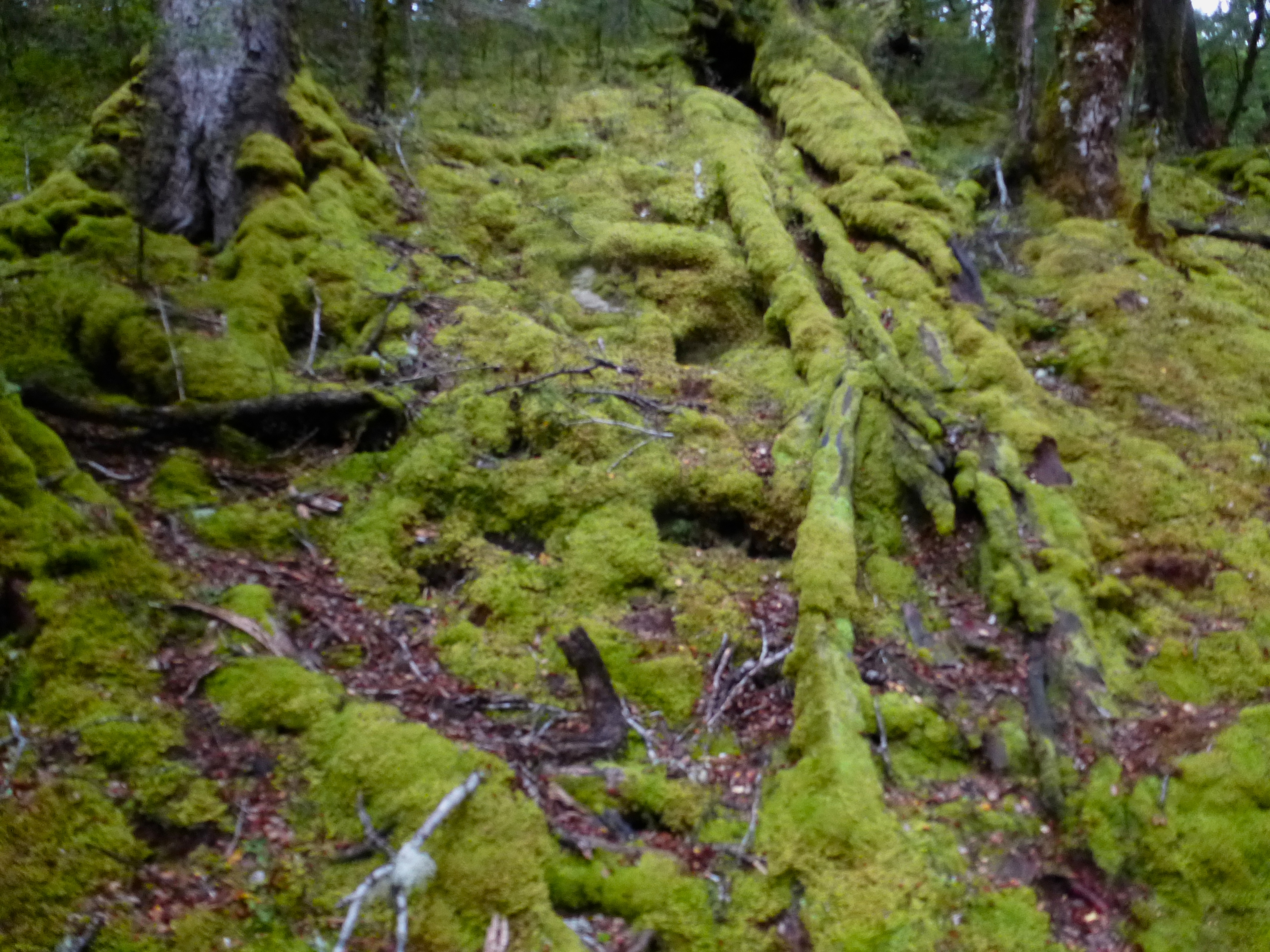 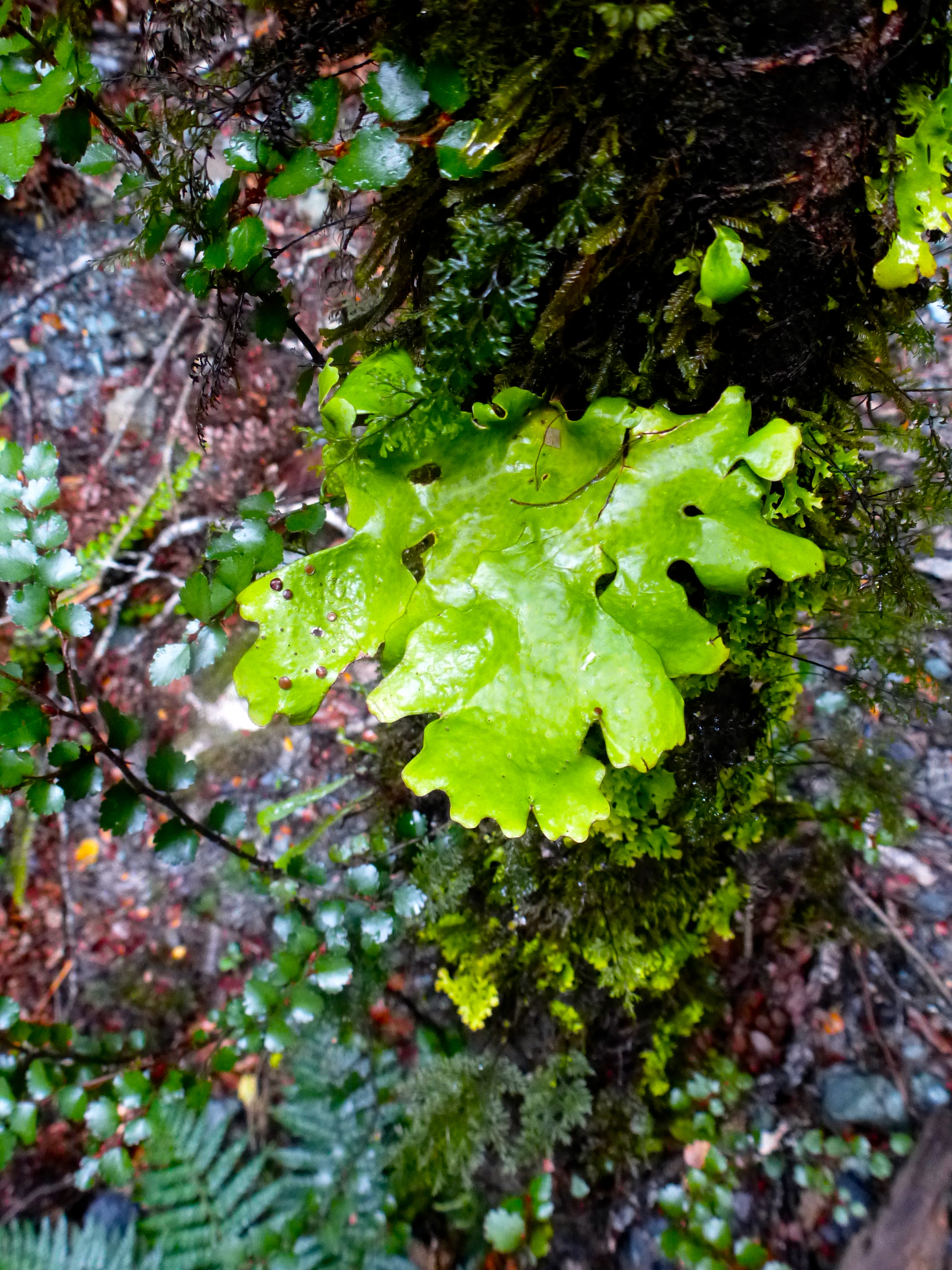 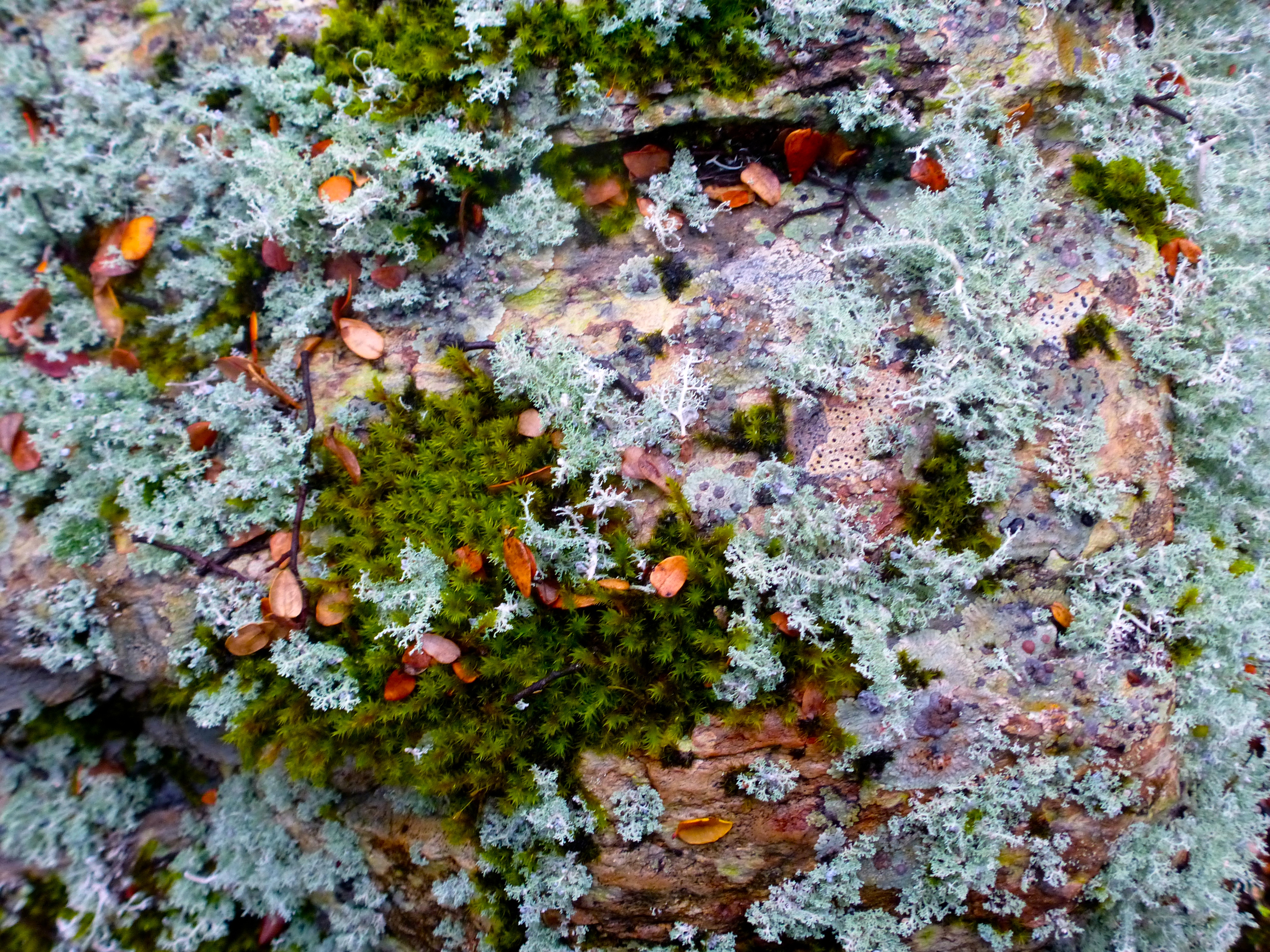 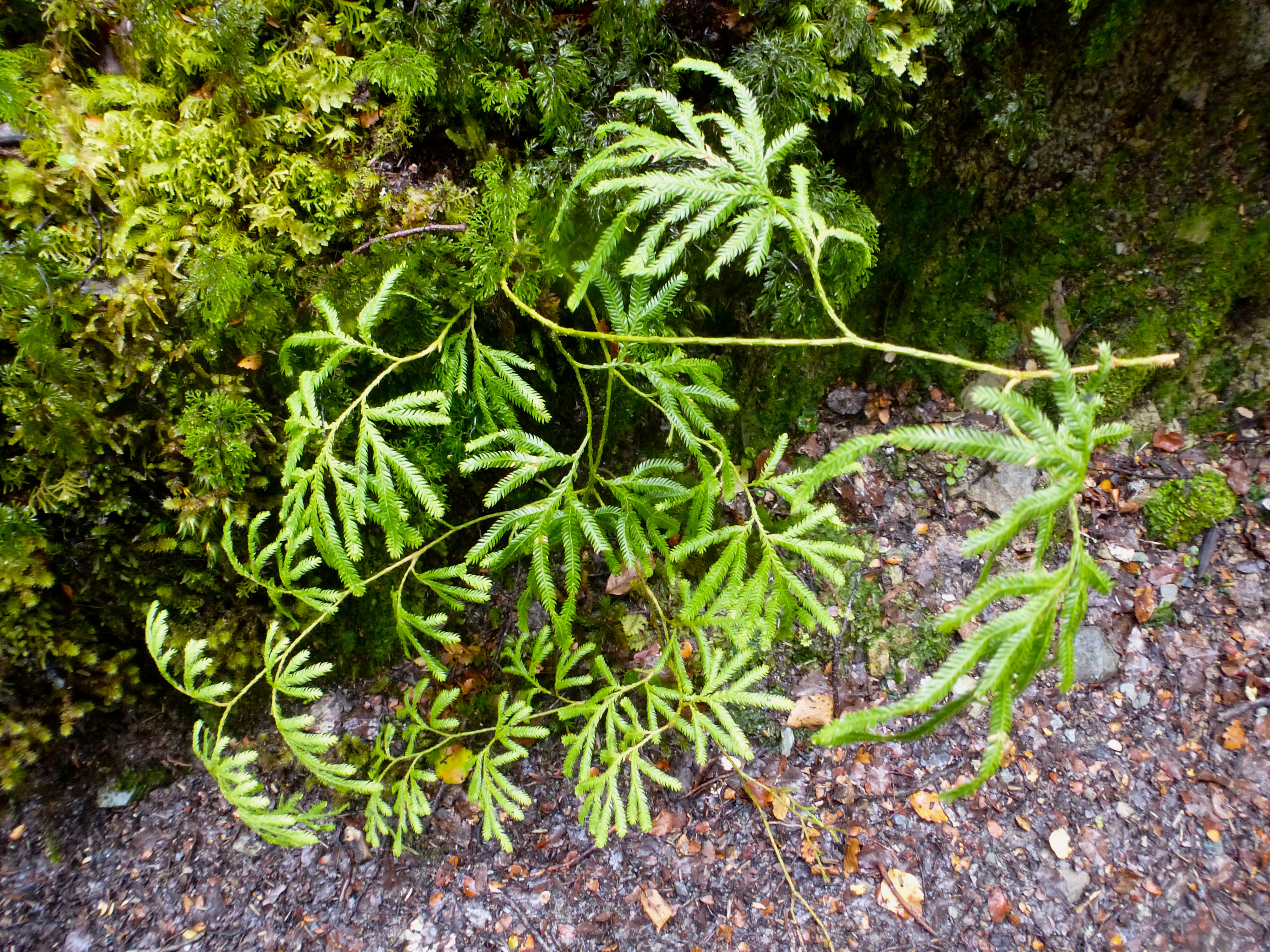 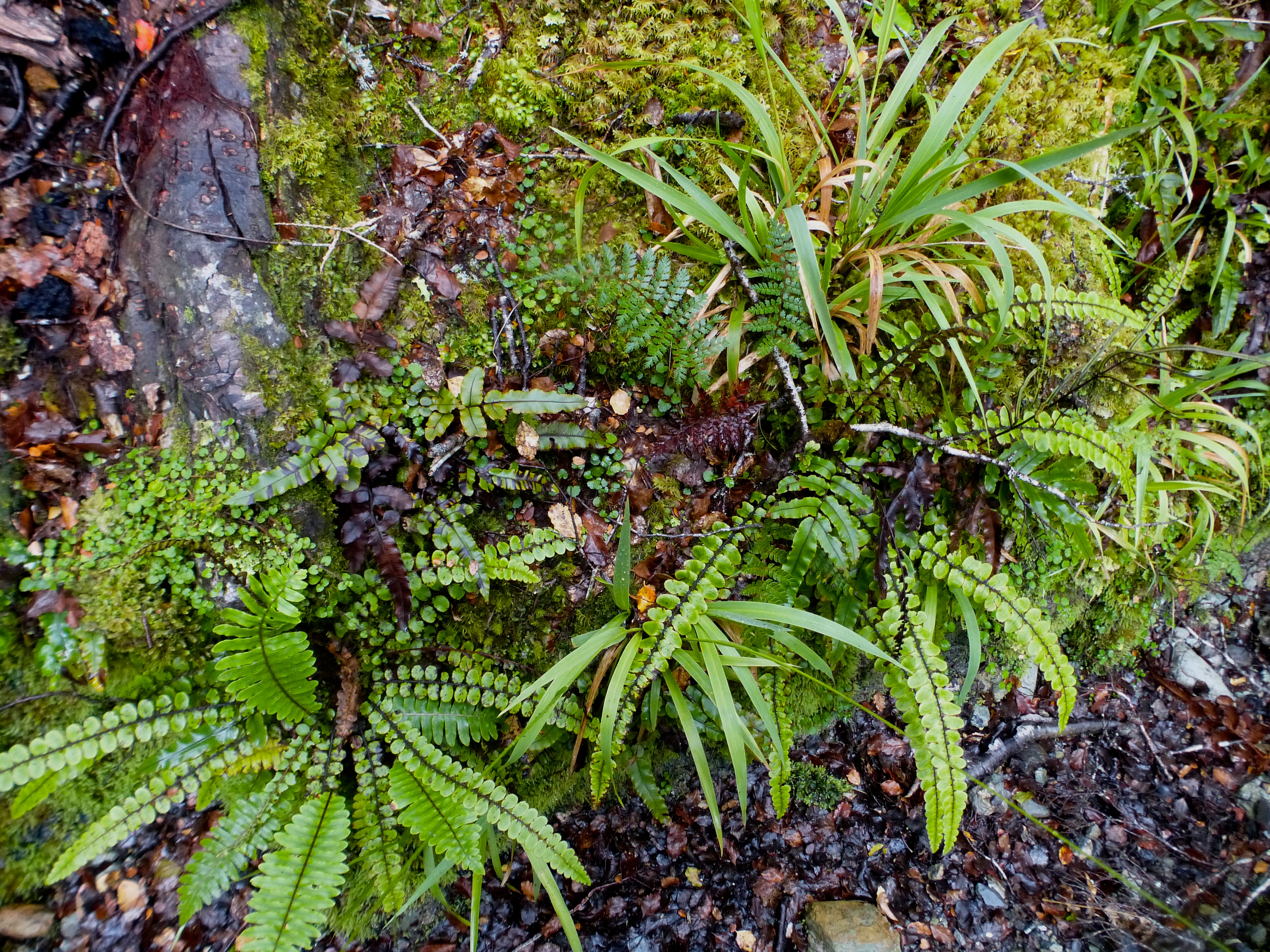 Then a dear little gray bird with a black beak and feet hopped onto the trail in front of us. It turned out this was a bird famed for its inquisitiveness and fearlessness: the South Island Robin (Petroica australis). There are two subspecies, one on the South Island and one on Stewart Island, 30 km south of the South Island. As I photographed it, it moved closer and closer: 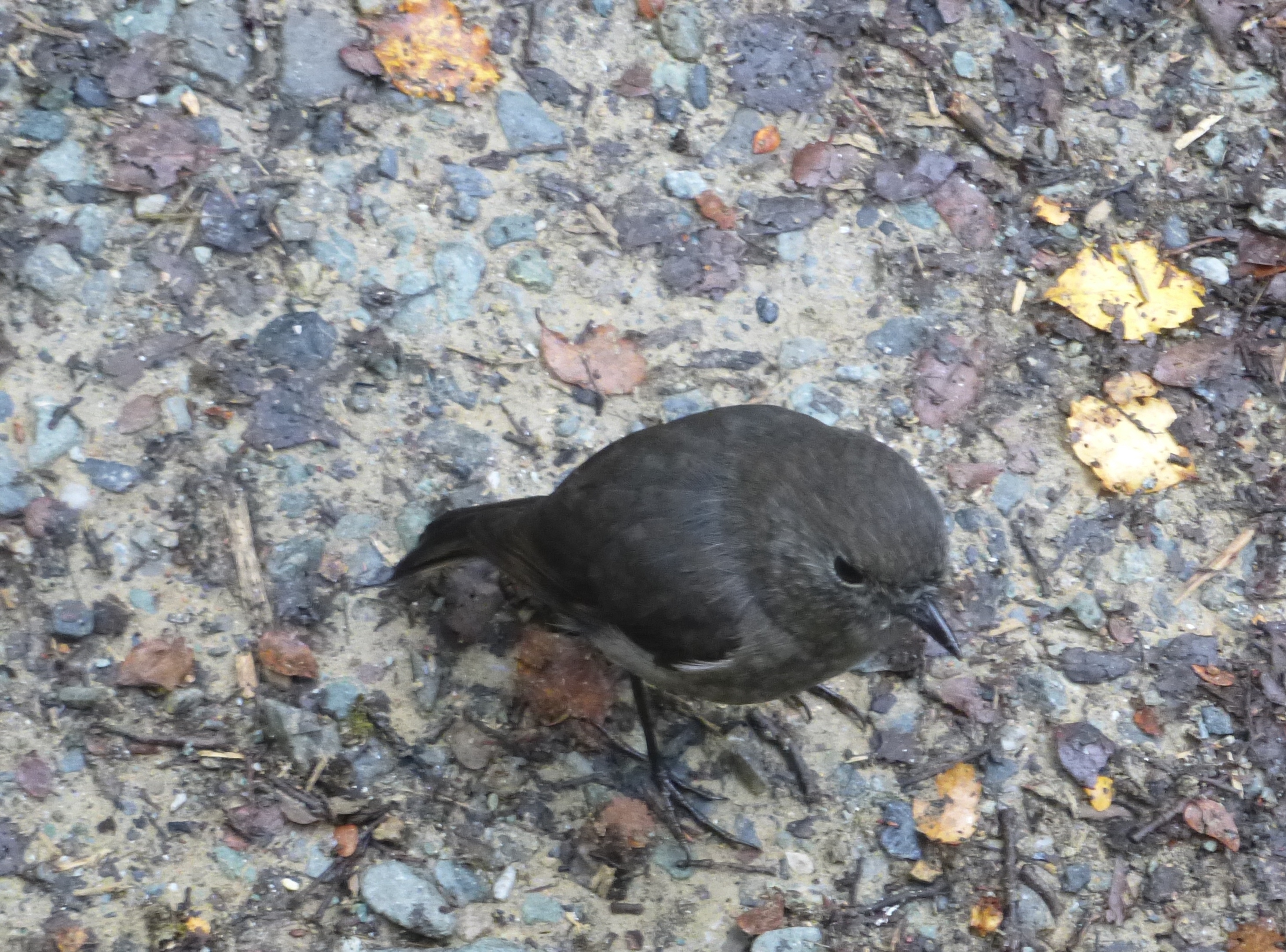 Then it hopped on my shoe and began pecking at my shoelaces! It was so light that I couldn’t feel it land on my foot, but the pecks were gentle and perceptible. My guess is that it mistook them for either a worm or nesting material. 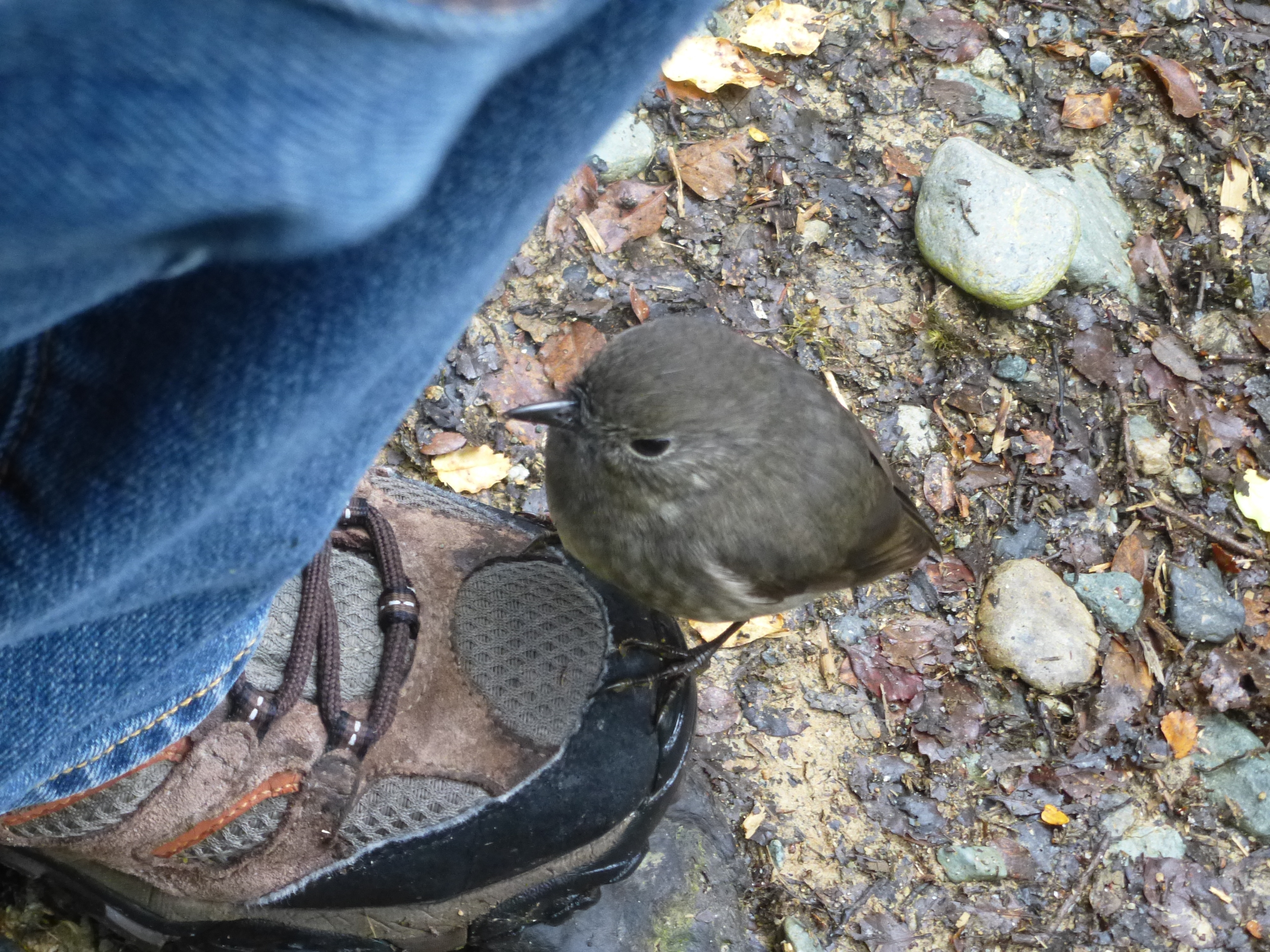 Then it hopped on Kevin’s foot and tried to steal his shoelace! What an adorable little creature it was. 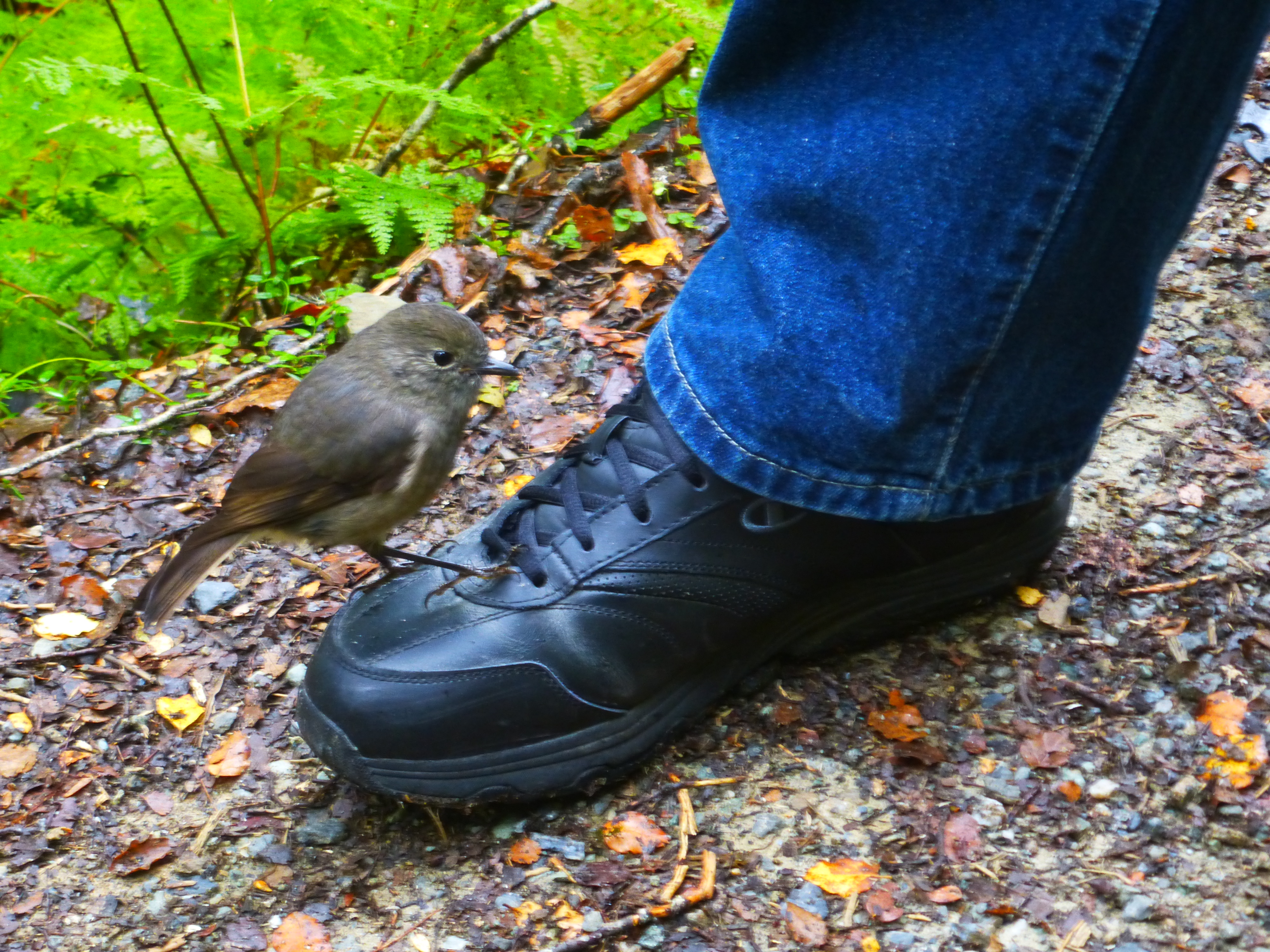 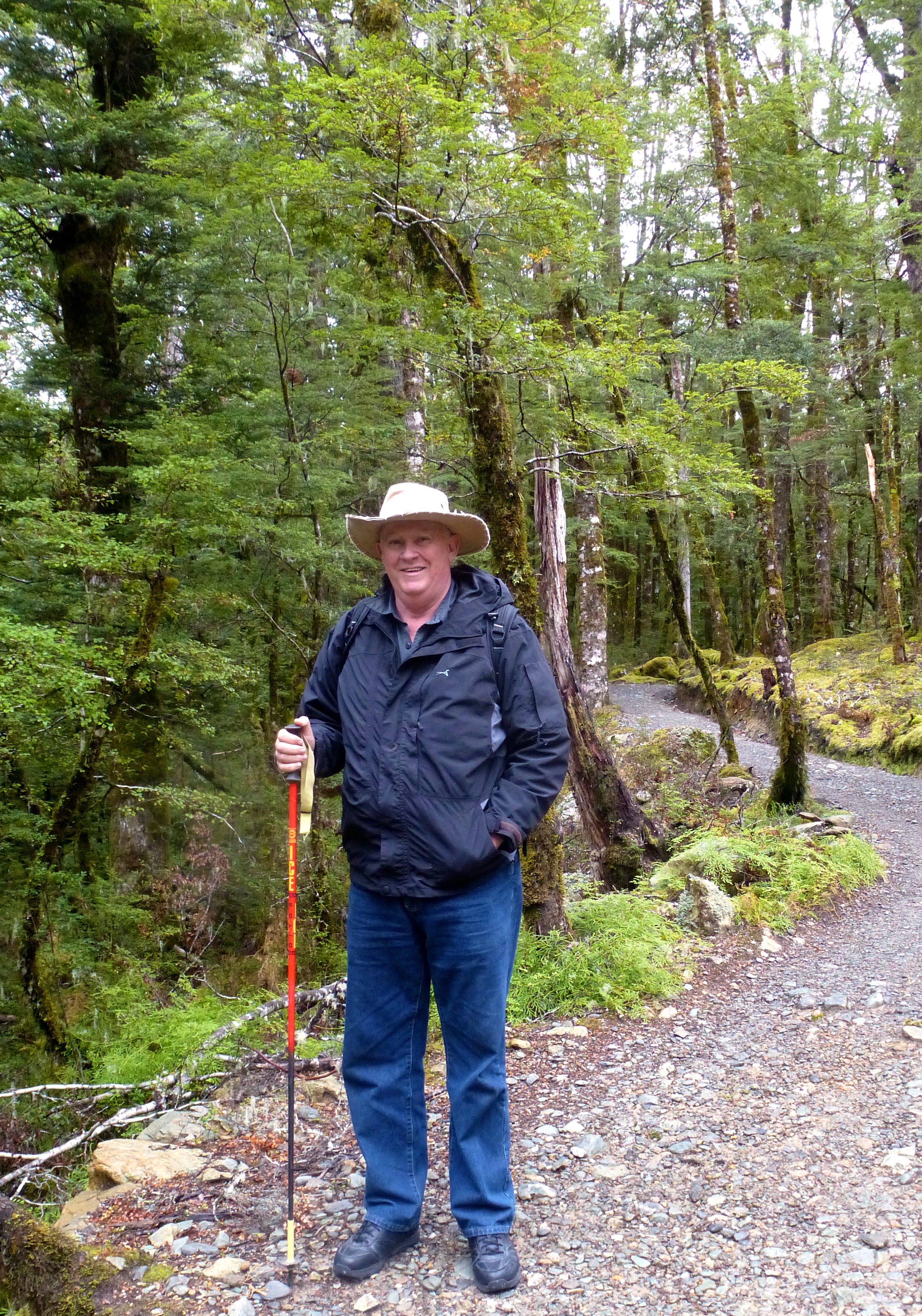 We saw another bird in a tree at the track entrance. I don’t know what species it was, but I’m sure a reader will identify it below: 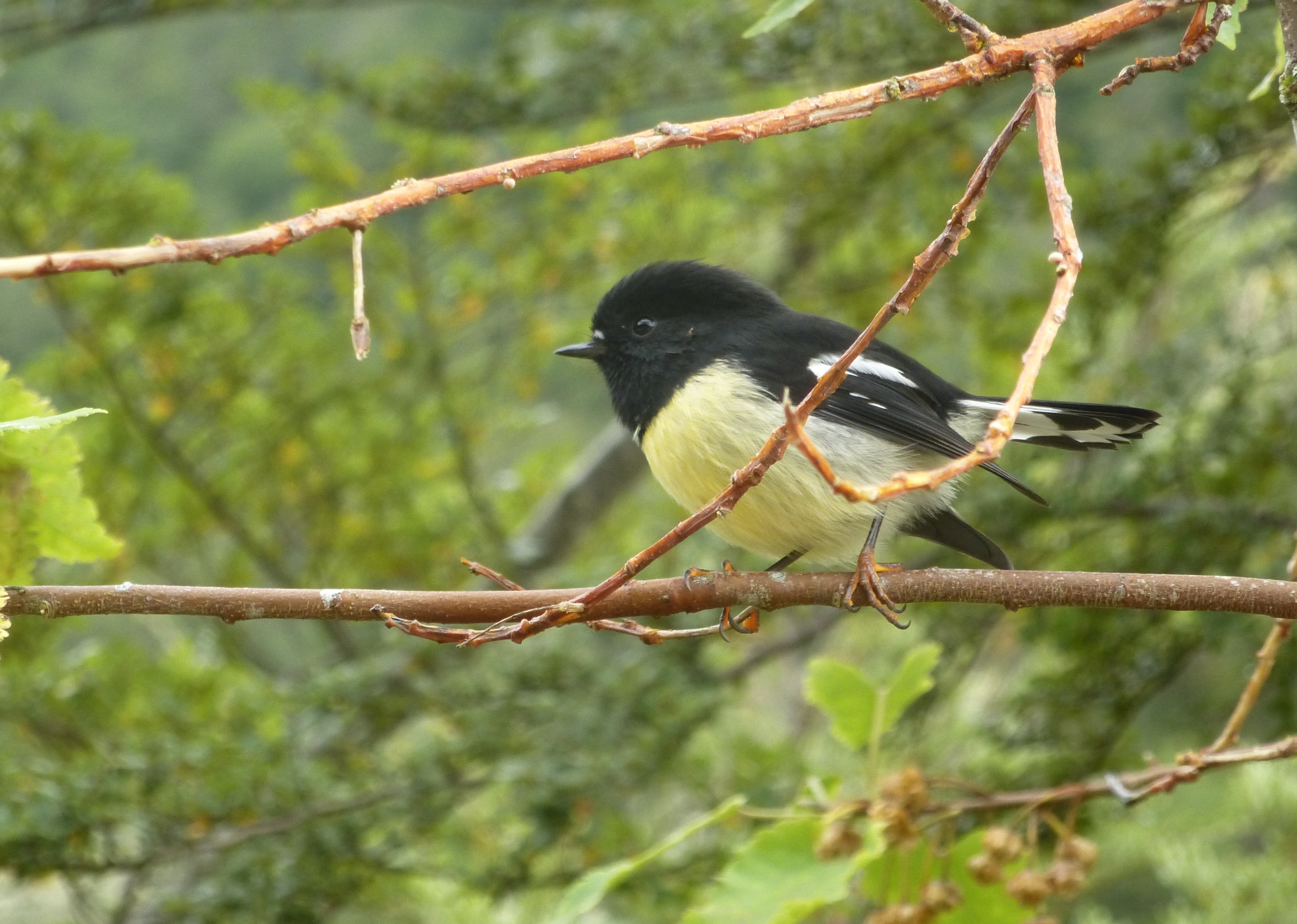 Dew in the grass: 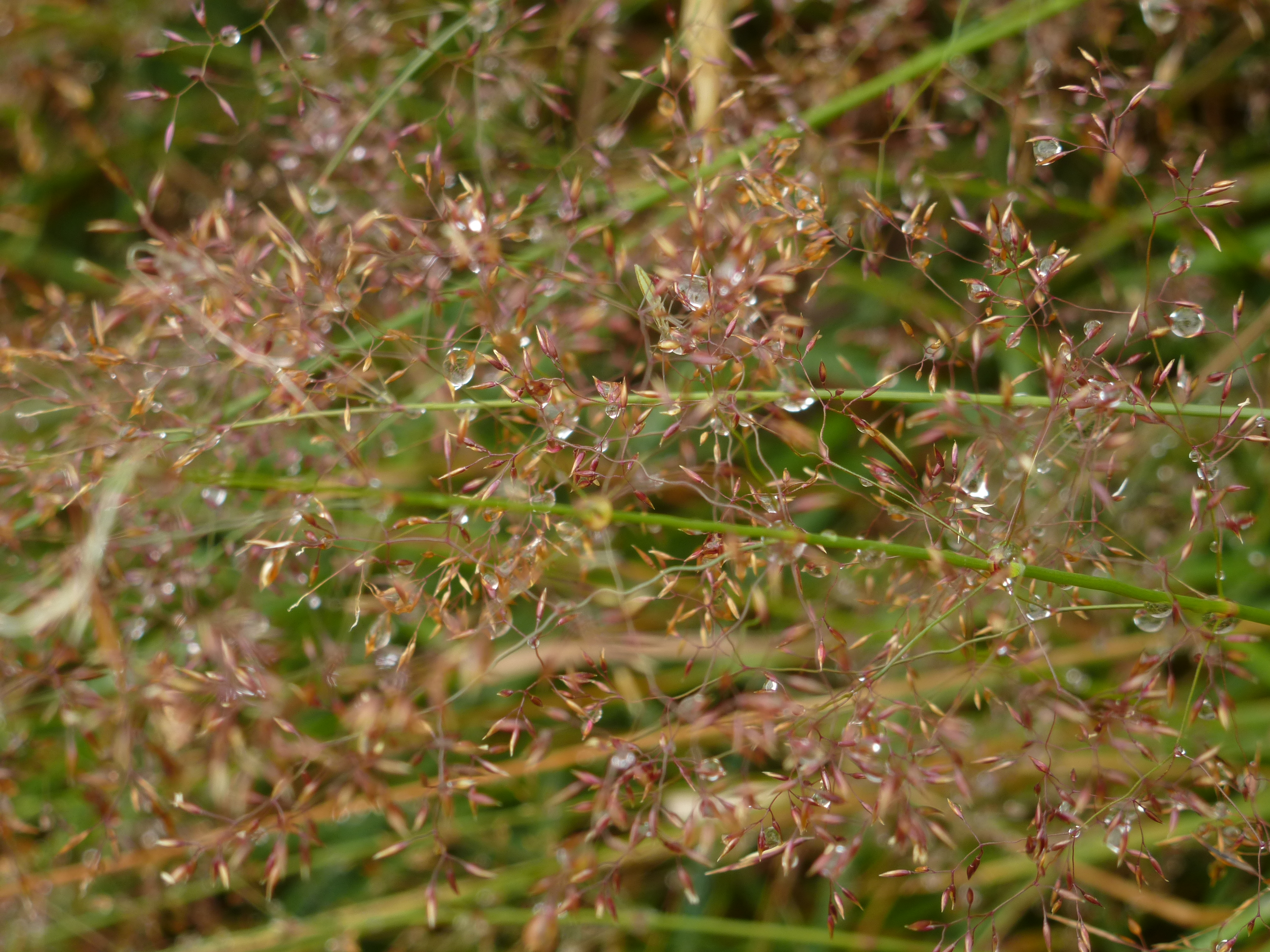 New Zealand is of course full of sheep, but seems almost as full of cows. The dairy industry in this area is famous, and produces good ice cream. Here’s a big bull that got out of the field and was lying by the road. Intrepid as ever, I approached him to take his photo: 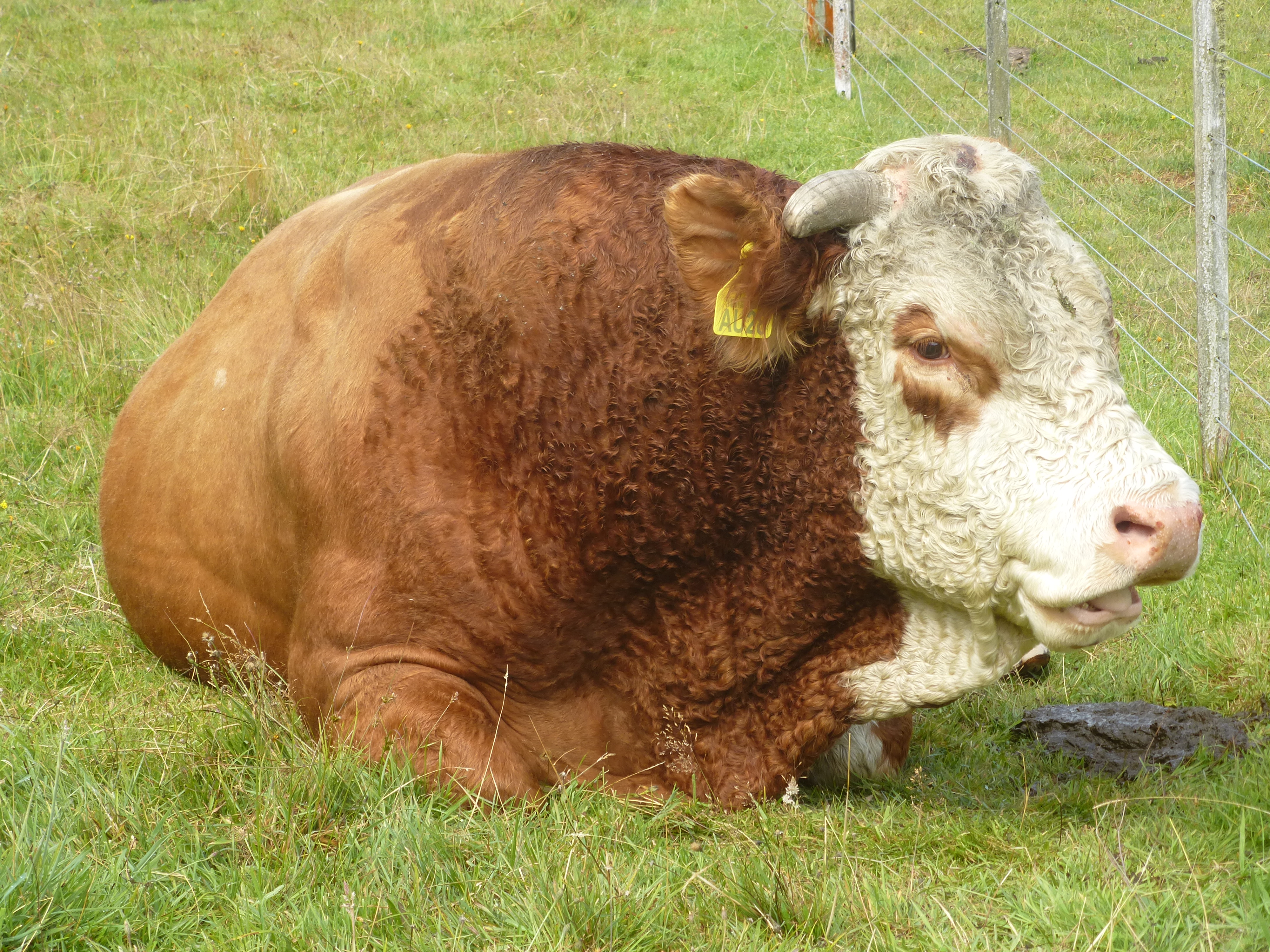 Meanwhile, a cow urinated in the field nearby. Notice how daintily she lifts her tail to avoid soaking herself: 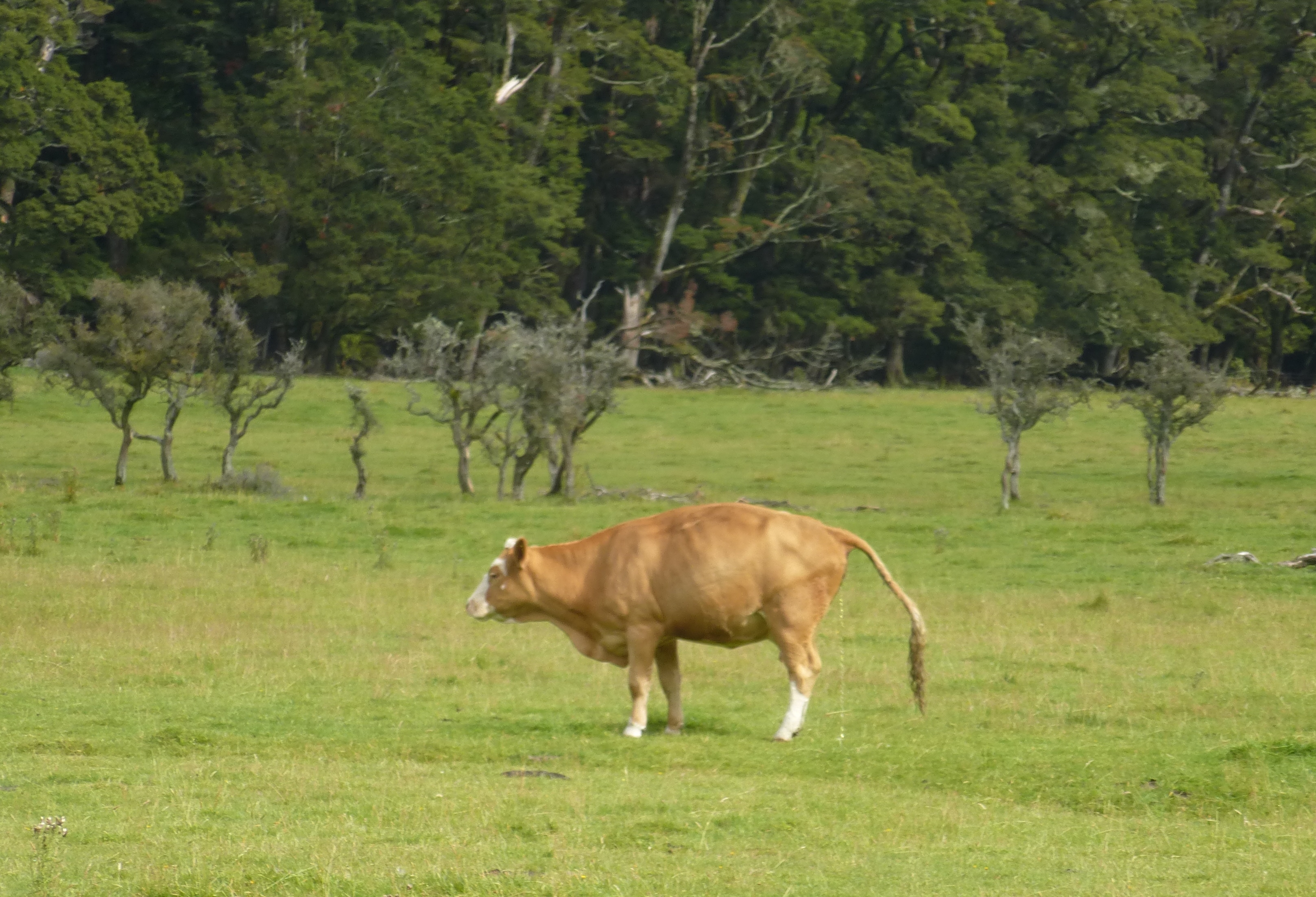 Although there doesn’t seem to be a problem with biting mosquitos in New Zealand, the replacement in that niche is sandflies. There are 13 species in the genus Austrosimulium, but just two species bite: the New Zealand blackfly (A. australense), and the West Coast blackfly (A. ungulatum). I’m told that in some places they make camping very difficult, and in once place I was bitten many times almost instantly. Below are two bites at the base of my thumb; you can see where the fly just drills a hole in the skin, and quickly! Fortunately, the swelling and itching abate within an hour or so: 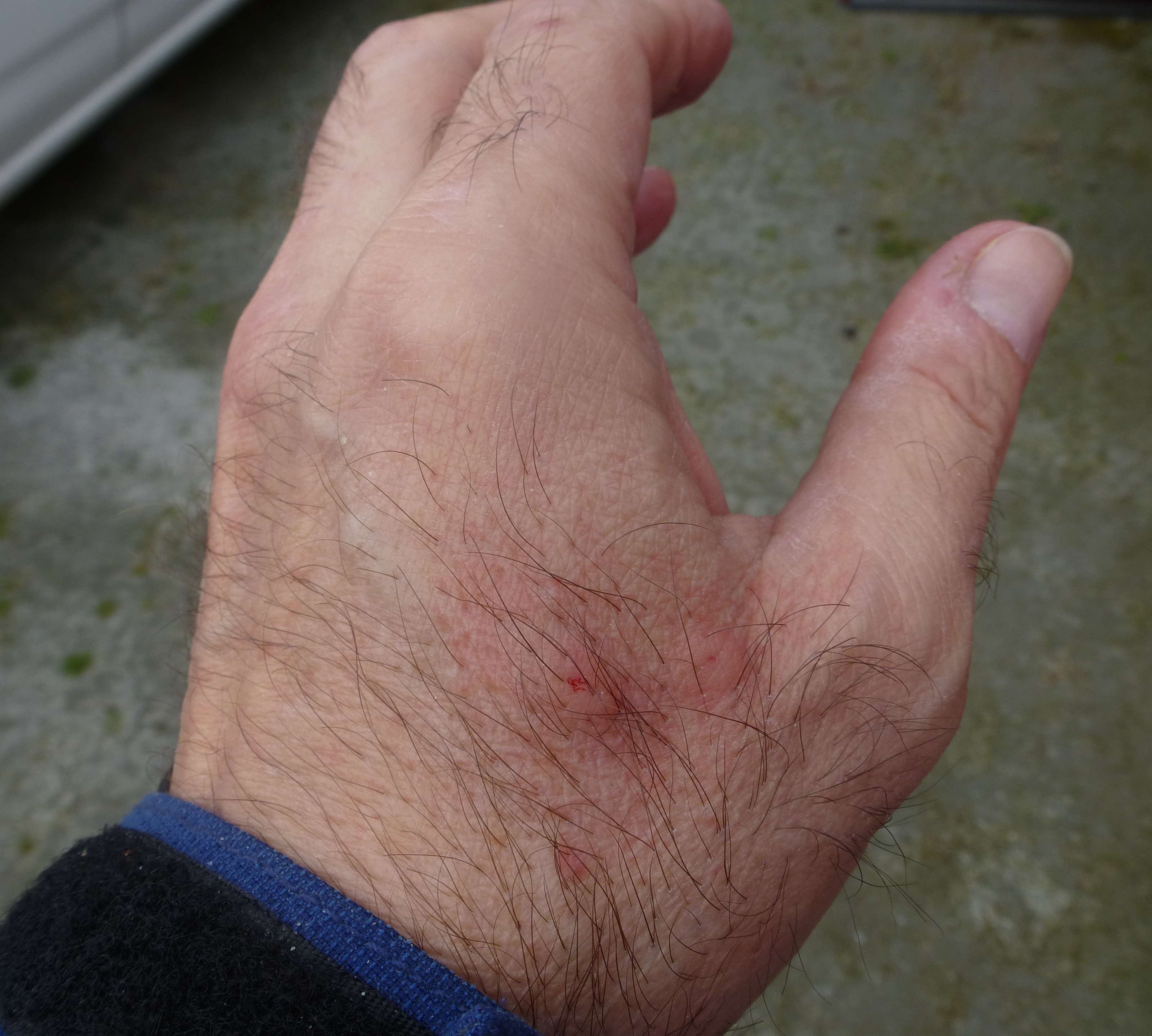 There are two named places of note in the area. The first, as one reader pointed out yesterday, is the village of Paradise, which seems to consist of only one house—the residence of the family who owns the adjacent sheep station. You can see it behind me in this photo: 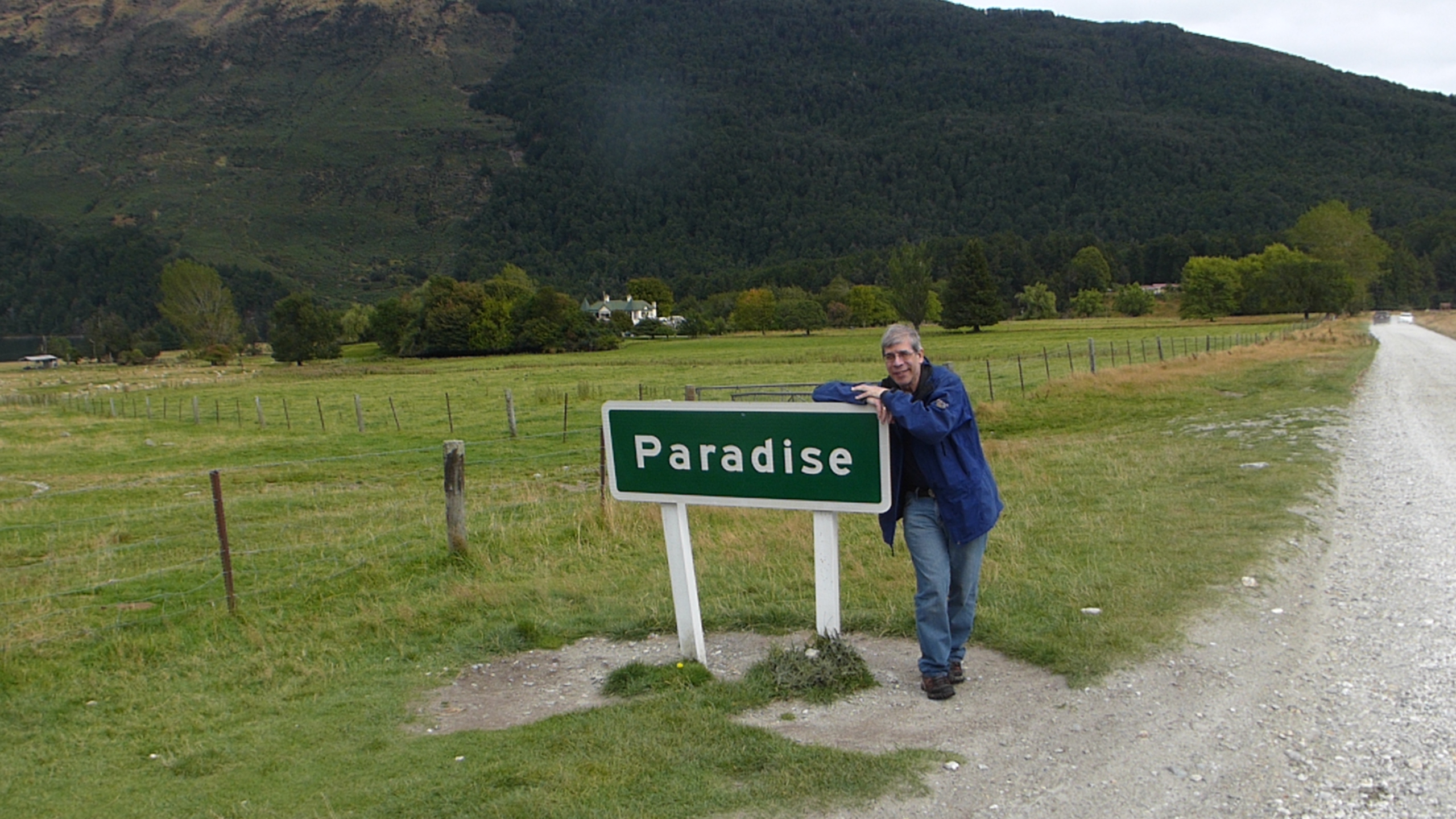 Now I almost share the plight of singer Charlene, who, in one of the world’s worst pop songs, sang these words (among many others):

Oh I’ve been to Nice and the isle of Greece
While I sipped champagne on a yacht
I moved like Harlow in Monte Carlo and showed ’em what I’ve got
I’ve been undressed by kings and I’ve seen some things
That a woman ain’t s’posed to see
I’ve been to Paradise, but I’ve never been to me

Remember that godawful song? (“I’ve been undressed by kings.” Really??) It may in fact be the worst pop song I know of. If you wish, you can hear Charlene’s version, a paean to antifeminism, here. Well, now I’ve been to Paradise, but I’m not sure if I’ve been to Me.

The other place of note is the River Jordan, which most of the year is a small, dry, and rocky creekbed: 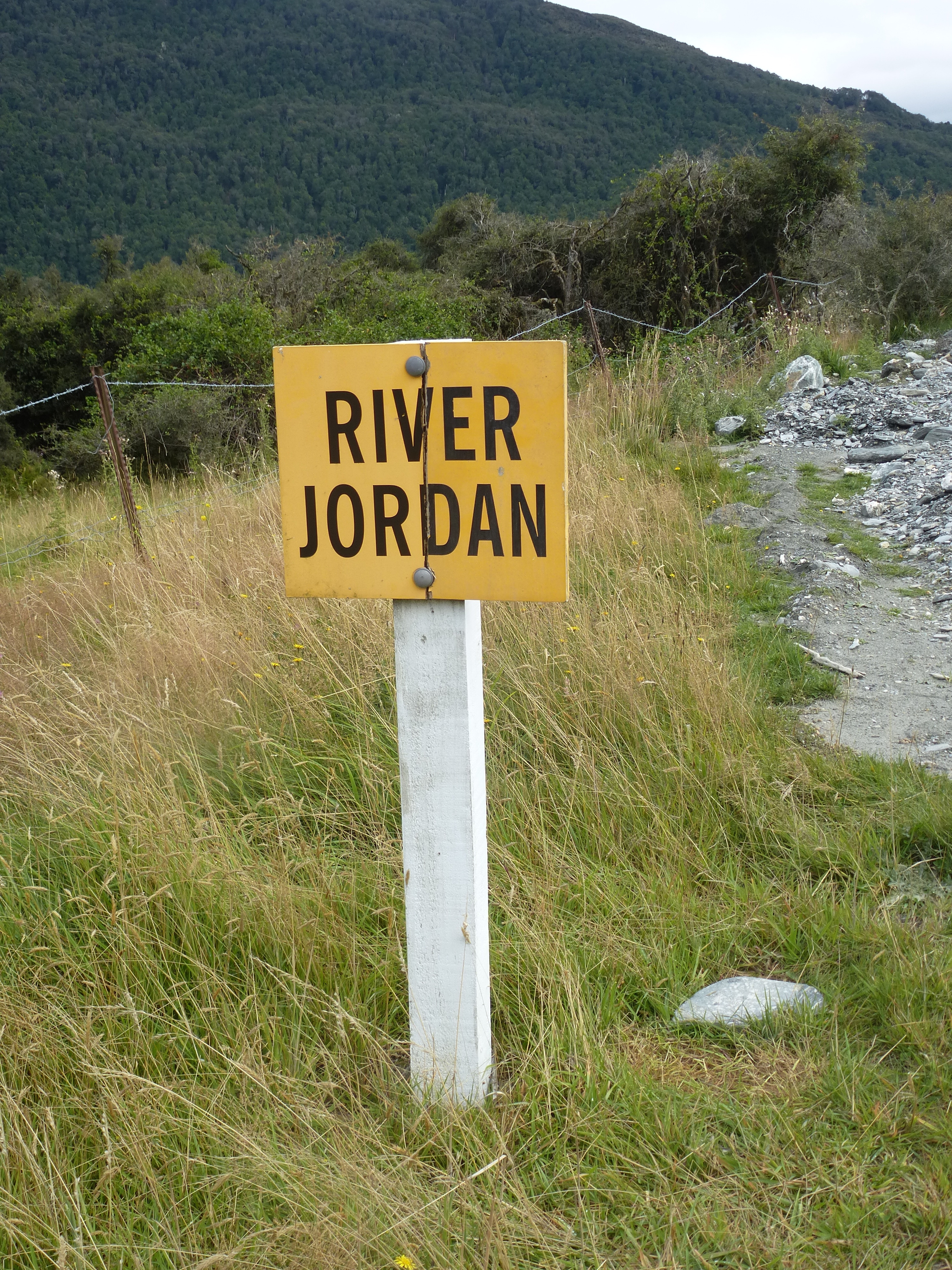 Because I wanted to be baptized in the River Jordan, which inconveniently offered no water, I had to pour water over myself while standing in the creek bed (all photos of me are by Kevin):

After a long day of walking and touring, Kevin and I repaired to the Glenorchy Cafe for lunch. His repast was a BLT, mine a pork steak sandwich on a cibatta with grilled onions, vegetables, and cheese, served with fries. We both washed down our food with a local brew, Speight’s. The food was superb, especially for a town so small. It’s a highly rated place. 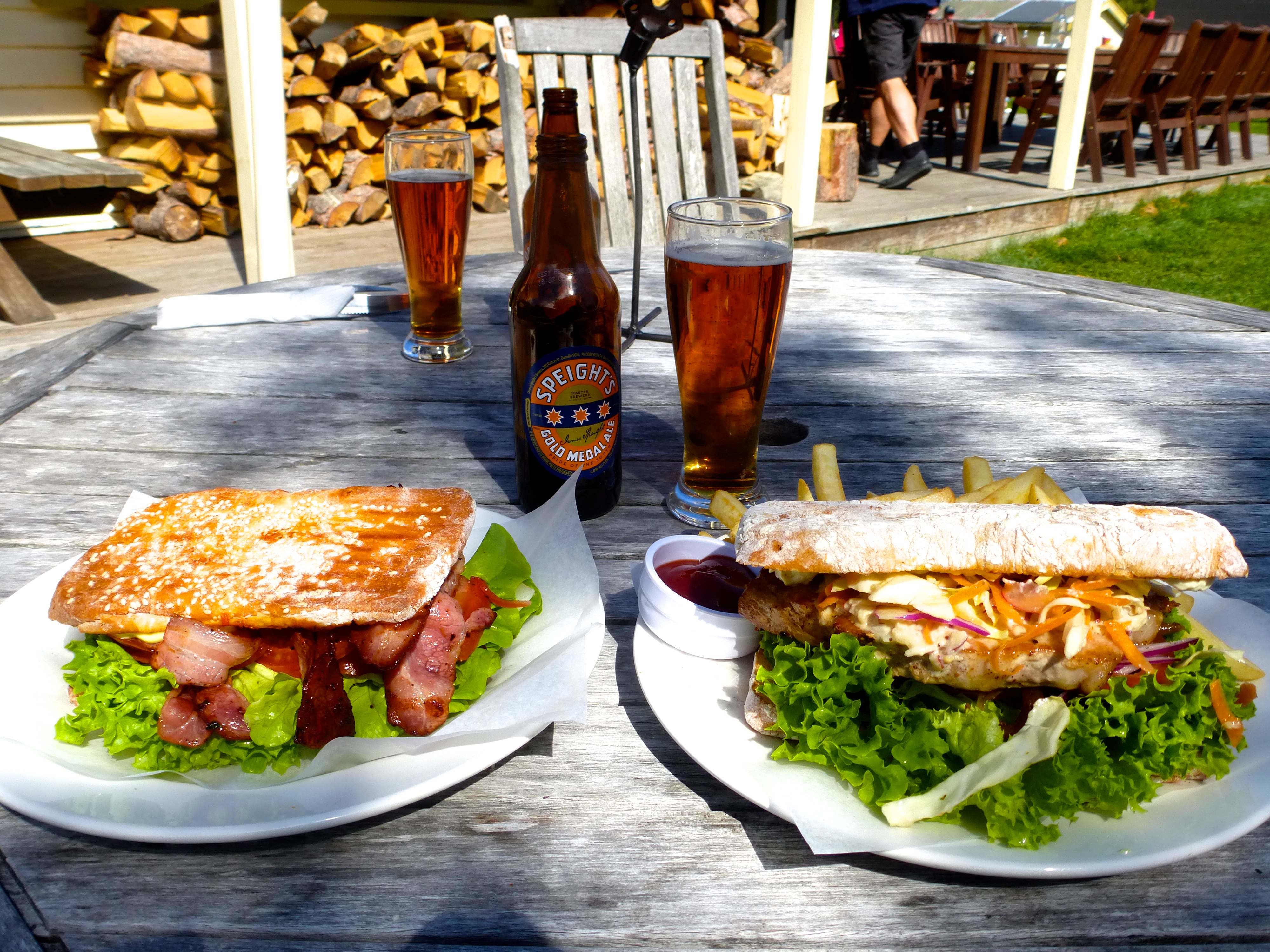 Thus endeth yesterday’s (Saturday in NZ) jaunts. I’m writing this the day before it’s posted; when you read this, I’ll be moving to a backpacker’s hostel in Queenstown (the town is packed out for lodging) and getting ready for Monday’s all-day tour (by boat) of the Milford Sound. Of the 12 hour trip, 10 hours involves getting to the sound and back by bus and only 1.5-2 hours is on the boat. Still, it’s supposed to be one of New Zealand’s most spectacular sites, and has whales, three species of porpoises (porpoi?), and penguins. I’m excited because of its reputation; Wikipedia says this:

Milford Sound / Piopiotahi is a fiord in the south west of New Zealand’s South Island within Fiordland National Park, Piopiotahi (Milford Sound) Marine Reserve, and the Te WahipounamuWorld Heritage site. It has been judged the world’s top travel destination in an international survey (the 2008 Travelers’ Choice Destinations Awards by TripAdvisor) and is acclaimed as New Zealand’s most famous tourist destination. Rudyard Kipling had previously called it the eighth Wonder of the World.

The world’s top travel destination! (I would have thought the Taj Mahal was a contender.) Stay tuned for my report.

45 thoughts on “Travels: Around Glenorchy”