Twitchy is a Twitter aggregation site with a conservative bent, so it’s no surprise that it put up a couple of article about the Southern Poverty Law Center’s (SPLC) recent bad behavior, since the SPLC is becoming increasingly allied with the Regressive Left.

You may remember that the SPLC put both Ayaan Hirsi Ali and Maajid Nawaz on its list of “Anti-Muslim extremists”. When called to account for this unconscionable slur on Muslim reformers (one of whom is still a Muslim), and on Nawaz in particular, Heidi Beirich, Head of Intelligence (?) at SPLC simply lied, claiming that Nawaz had called for increased surveillance of mosques (see Heather Hastie’s post on the SPLC and the links therein).  This was clearly an untruth that Beirich made up: as Nawaz noted, he’s called for decreased surveillance of mosques: 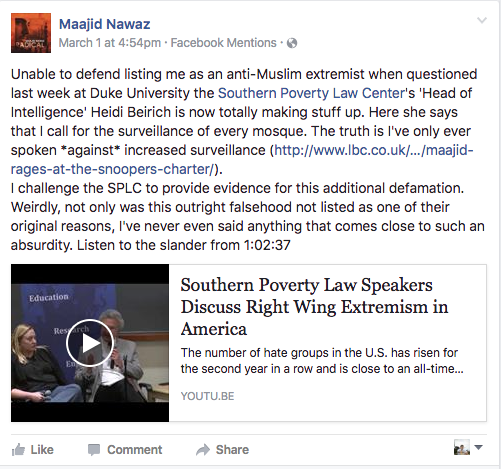 I hope Nawaz forces them to retract their slur, or even sues them for slander, as this is surely a deliberate lie that damages his reputation.

What many people are coming to realize is that the SPLC, once a great organization for protecting civil rights and prosecuting racist offenders, is now transforming into an entitled McCarthyite organization, compiling “hate lists” and defending Islam, even at the cost of slandering reformers. These “hate lists” are not without controversy, and the Center itself has been the focus of credible reports of financial mismanagement (see here).

Like many Regressive Leftists, the Center has taken a position against Muslim reformers. Now, as reported by Twitchy (here, here, and here), the organization tried its best to dissimulate when Juan Thompson, a black man and former writer for The Intercept, was arrested for  making 8 threatening phone calls to Jewish community centers in Atlanta. There have been at least 100 such threats against Jewish organizations so far this year—I haven’t mentioned them lest I be accused of defending threatened Jews but not Muslims—and most of these weren’t made by Thompson. They’re probably part of a general xenophobia against immigrants, Jews, and Muslims that, previously under wraps, was unleashed by Trump’s election.

At any rate, Thompson’s threats were “excused” by the SPLC as “not anti-Semitism” since they may have been made as part of his harassment of a former girlfriend (see the New York Times piece and an article in Time Magazine), since they were made in the name of his girlfriend. The SPLCC swung into action, issuing this tweet which has been reproduced below since the SPLC later removed it:

But given that there were a hundred threats, why was the SPLC so eager to exculpate Thompson for 8 of them, denying that he was anti-Semitic? They even issued another tweet (below), saying in effect, “It’s not anti-Semitic because it was a copycat crime. Besides, what about the unsolved threats?”:

In 8 instances, Thompson seems to have been opportunistically copycatting the horrific JCC bomb threats. This doesn’t explain the other 92.

Thompson appears culpable in a small fraction of the JCC threats, but this is not case closed and it’s imperative we continue to #ReportHate

Twitchy suspects, and they might be right, that since the arrested suspect was an African-American, he didn’t fit the SPLC’s narrative of hatred emanating from white supremacy groups, and thus they tried to minimize Thompson’s involvement, as in the tweets below:

Thompson "is not believed to be the main suspect behind the rash of bomb threats, according to law enforcement” https://t.co/Q00OLcu3o4

Thompson was fired from The Intercept for fabricating stories and quotes, and has shown signs of being unhinged since then. And he published some pretty strong anti-Israel tweets before all this went down—statements that should have been noticed by the SPLC’s investigation. Well, Thompson may not be anti-Semitic, but he’s shown clear signs of being anti-white, as the Anti-Defamation League revealed in their own tweets.  But of course to the SPLC, that’s not bigotry. I wonder if they’d have defended Thompson against charges of anti-Semitism if he was a white Republican male who was just trying to harass his girlfriend by making threats against Jewish community centers.