When I got the latest attempted comment defending chiropractic “medicine” on my website, I had a déjà vu moment, as if I’d seen that kind of language before. And then I remembered—it was on a bottle of Dr. Bronner’s soap!

I don’t know how many people use this wonderful liquid soap, which comes in varieties like lavender, eucalyptus, and peppermint (I prefer the original peppermint), but it smells great and is useful for all kinds of tasks. You can even brush your teeth with it! It was popular in the Sixties, beloved by hippies, but it’s still sold in a lot of places (Trader Joe’s, for instance, which is where I get mine), and it’s not expensive.

The soap was invented by Emanuel Bronner (1908-1997), a German-American Jew who used his products to expound his philosophy: a “Moral ABC” connected to Judaism and world unity. To promulgate his ideas, he crowded the labels of his soaps with all kinds of bizarre and unhinged statements in tiny print, generously larded with exclamation marks. Here’s a sample:

An enlargement of a small bit of the label: 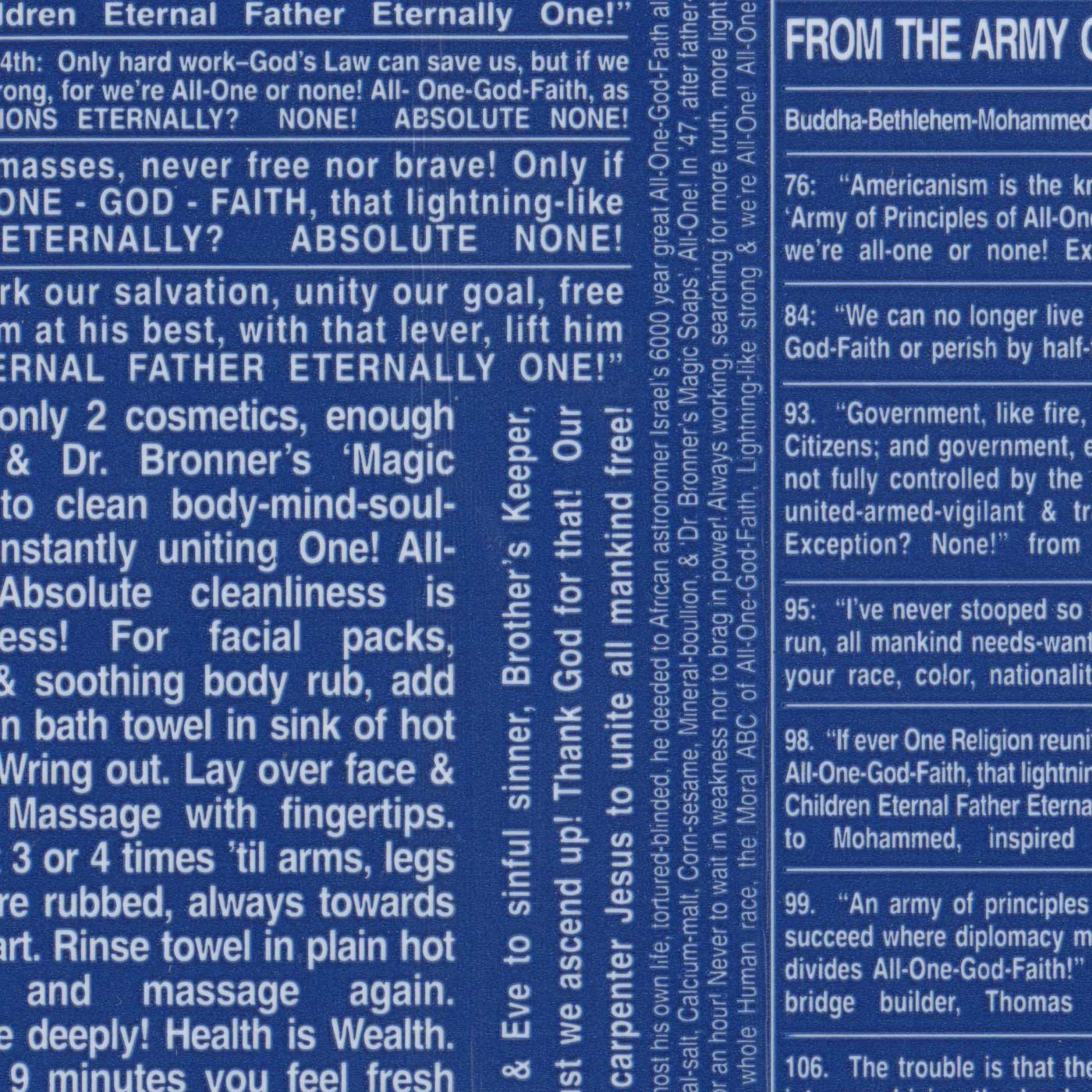 Besides the soap being excellent and nice-smelling, you could spend hours reading the label, and I still remember many of the statements, like “Okay! Okay!” Here’s what a whole label looks like (you won’t be able to read it, but you can see a readable version here). 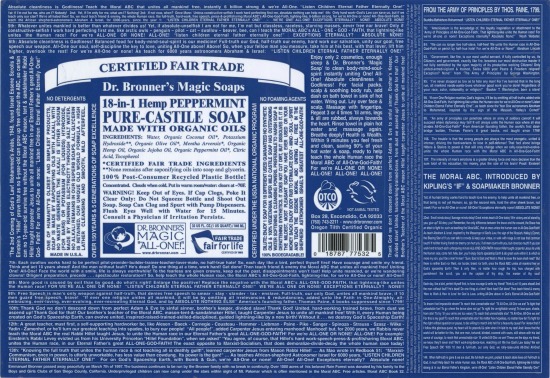 Although Bronner died in 1997, the soap is still great and the labels still bizarre.

But I digress. Compare the label of those soaps with this comment from “MILCOON” that I got about one of my anti-chiropractic posts, “More chiropractic shenanigans” (it’s reproduced exactly as I got it):

I’ve heard plenty of people say they have had good results from a Chiro!
Yes some chiropractors don’t care about their patients, but NOT ALL of them!!!
Example 1- lady had migraines for well over 12months suffering every couple of weeks with bad migraines doc no answers. Paid for scan privately still no answers!! Few Treatments with chiropractor no complaint of migraine for months and months!
Example 2- lower back pain and sciatica, seeing physio for months no better! 2 treatments with a Chiro already noticed improvement!
And finally about 4 or 5 examples of persons attending appointments at a Chiro when their doctor has not offered any kind of referral to see a specialist and Chiro has said to them you must ask for a scan or a referral for so and so. All have resulted in findings of health problems!!!
1 of which a cancer was discovered! The partner of the person who sadly passed away was supremely grateful because they found out and were able to spend their last days together as DOCTORS couldn’t do anything to save them!!!!
There are good and bad in EVERY single profession and most likely you will hear about the bad!! Chiropractic clearly works for some people! Not every Chiro is good! But not every chiro is bad or a money grabber! As the same with doctors not all of them are good!!! Not all of them genuinely care about their patients either!! Unfortunately it’s the way things are!! It’s life! Chiro works for some but not others! If you want to try it then why not. Instead of going to the doctors that prescribe pills with endless lists of side affects!
You’re suggesting most chiros are “lining their pockets?”
So people have cancer and the pharmaceutical companies make drugs for people with cancer (or other diseases) are these companies reducing the cost of the drugs to help people live and survive???… or are they continuing to line their pockets???.! I remember a few years ago the NHS saying they would have to stop buying a certain cancer drug because they couldn’t afford it! The pharmaceutical companies don’t then offer it at a lower cost because they want to continue to make their BILLIONS!!!!!! Doctors are a pharmaceutical companies dream (money, money, money!)

I swear to Ceiling Cat that this is just like a Dr. Bronner’s label. MILCOON could get a job writing for them. Okay! Okay!

Such are the followers of chiropractic, though I hasten to add that some of them aren’t this unhinged.

UPDATE: This just in: another comment from a chiropractor, who identifies himself as Dr. Christopher Perry. I don’t know what to make of this comment, which seems to both laud and diss his profession. (Poor writing seems to characterize this profession.) Would you want this guy’s hands on your spine? (Note: it’s reproduced exactly as it came in.)

As a chiropractor I know that the scientific evidence currently shows the chiropractic is an excellent form of healthcare. As a profession it is nothing more than a healthcare version of used car salesman peddling lemons. The AMA has succeeded in marginalizing chiropractic. As a veteran chiropractor of 30 years once told me the American public is too stupid to understand chiropractic. The AMA and the pharmaceutical industry has one So stick a fork in it chiropractic the fat lady has sung. And if you haven’t noticed everyone is fat

33 thoughts on “Dr. Bronner’s soap labels vs. defenders of chiropractic”