Good morning! It’s the final day of February—the 28th—in 2017. It’s also National Chocolate Souffle Day, and although that’s an estimable dessert, I doubt that any reader will be having one. If you are, weigh in below. And it’s Rare Disease Day, National Science Day in India (celebrating the discovery of the Raman Effect by C. V. Raman on February 28, 1938), and World Tailors Day, celebrating the invention of the sewing machine by William Elias Howe, whose birthday is said on Wikipedia (twice!) to be today. The only thing is that “William Elias Howe” was not a person (“William Howe” was a British nobleman, the inventor was “Elias Howe”) and Elias’s birthday was not today, but July 9 (1819), so any celebration is simply on the wrong day. I suspect Wikipedia screwed up three times here.  I’ve been waiting a long time for Greg Mayer’s critique, “What’s the matter with Wikipedia?”, which has languished as a draft post for years. Greg???

On Februaty 28, 1525, Cuauhtémoc, the last Aztec emperor, was executed on orders of the ruthless Hernán Cortés. In 1784, the Methodist Church was chartered by John Wesley. On this day in 1935, Wallace Carothers, working for Dupont, invented nylon. and in 1939, the “ghost word” dord, which is not a real word, was discovered in Merriam-Webster’s New International Dictionary: a lexicographical scandal. It turned out to have been an editor’s mistake:

On this day in 1953, Watson and Crick announced to friends in a Cambridge pub that they had discovered the “secret of life”: the structure of DNA. What a feeling that must have been! In 1983, the last episode of M*A*S*H aired on this day, setting a record “last episode” viewership of 106 million.  (I never liked that show.) Three years later, Olof Palme, Sweden’s prime minister, was assassinated in Stockholm. The crime has never been solved. And ten years after that, the ATF assaulted the Branch Davidian headquarters in Waco, Texas; nine died, including David Koresh, the cult’s leader. And on this day in 2013, Pope Benedict resigned his popehood (papacy?)—the first Pope to resign since 1425.

John Fahey is one of my musical heroes; one of the most adept and original acoustic guitarists of our time. Sadly, he died at 61 after a bypass operation; he had abused his body with alcohol for years. I once saw him perform live in Cambridge, Massachusetts; he was already on the downhill slide, was drunk, and the admission fee was about a dollar. But in his prime he could play (and write songs) like nobody else, and even his covers (often reworkings of old folks songs or hymns) were sui generis. I even corresponded with him for a while. Here’s one of my favorite Fahey songs, “Beverly”; the YouTube notes say it was performed in 1978:

If you liked that one, listen to “Knott’s Berry Farm Molly” (his songs often had very strange titles).

And my favorite cover: his version of the hymn “In Christ There is no East or West“, from the Blind Joe Death album. Religious music never sounded so good!

Meanwhile in Dobrzyn, Hili is posing a nom-related algebra quiz to Andrzej:

Hili: There are 18 pieces in this bowl and the bowl was full, so how many did I eat?
A: Quite a lot.
(Photo Sarah Lawson) 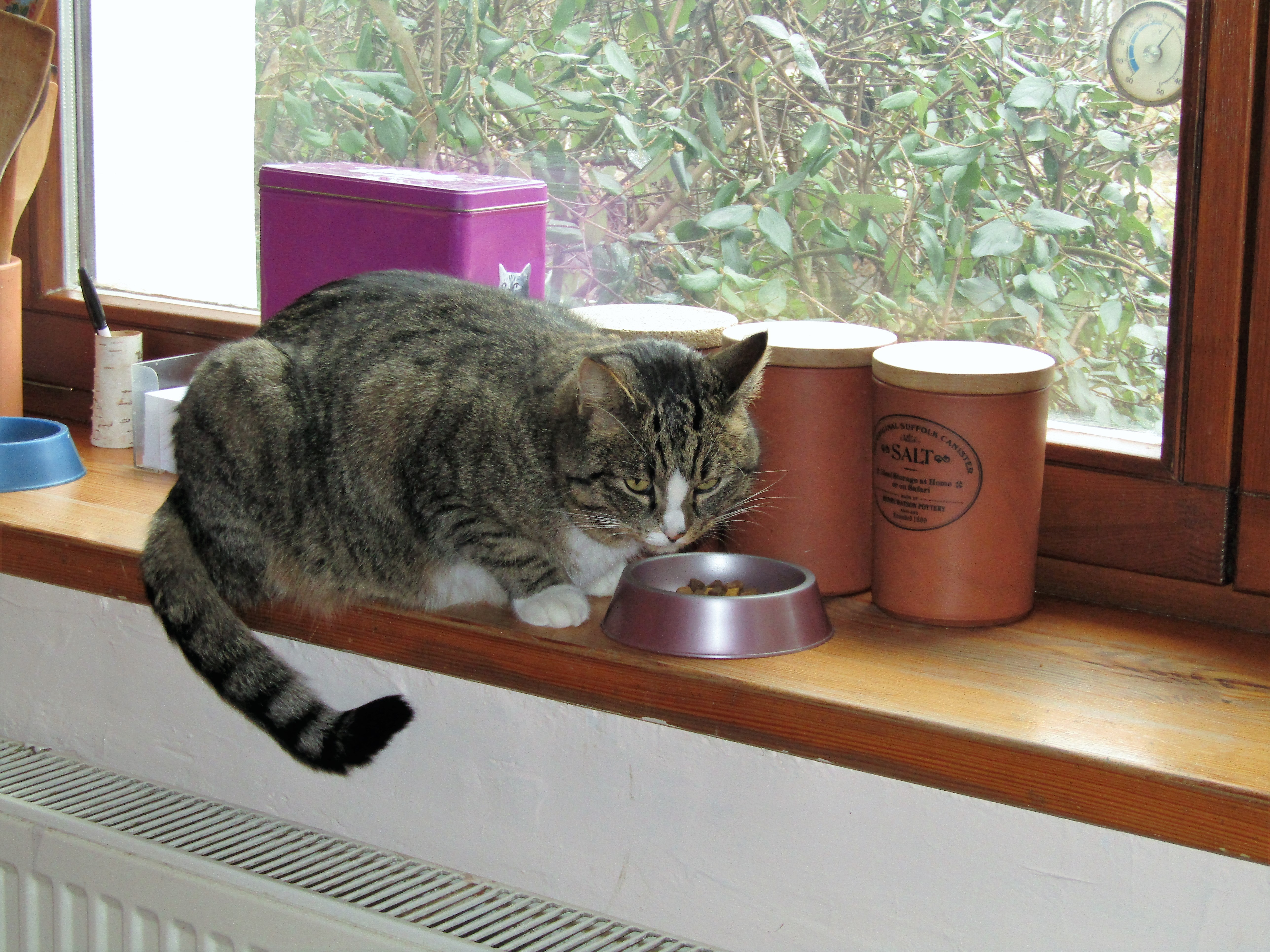 Out in the frigid wastes of Winnipeg, Gus got a new box, for he nommed his last one to shreds. His Canadian flag and polar bear license plate have been affixed to the replacement. So much box to eat, and so little time! 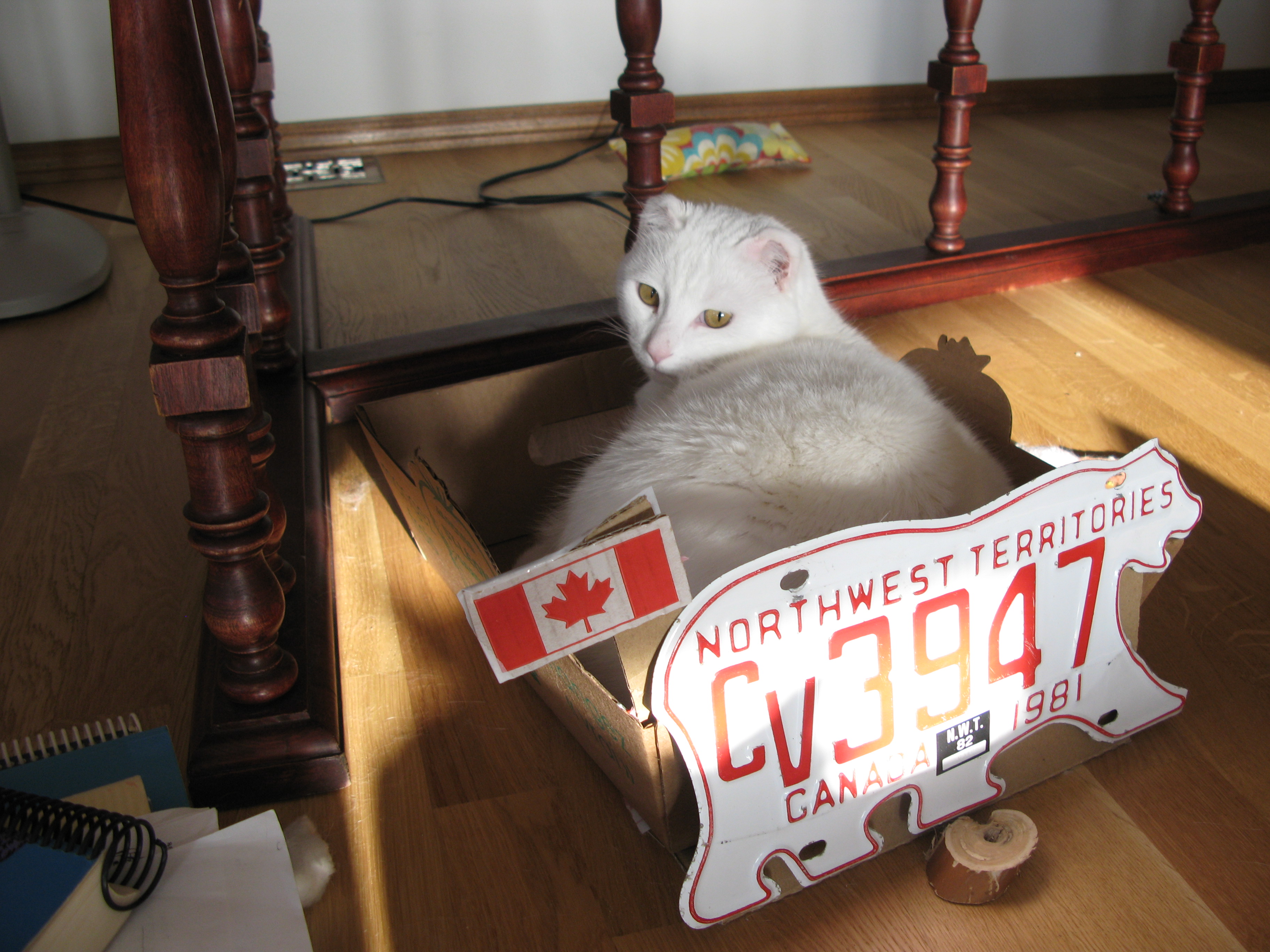 And, courtesy of reader Moto, we have a Science Cat: 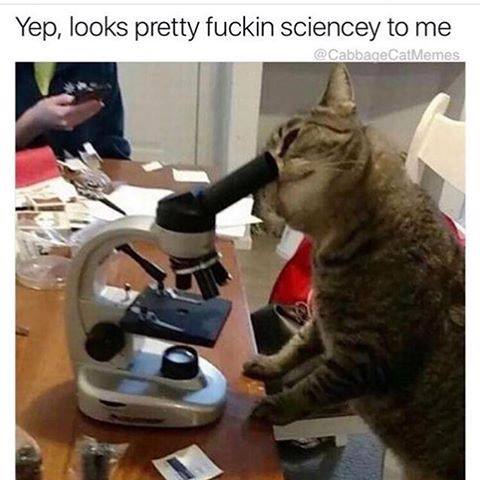