Reader Bruce Lyon, who happens to be a professor of ecology and evolution at the University of California at Santa Cruz (America’s most beautiful campus), sent a group of photos illustrating a research project, so we can haz some pictures and some science as well. His notes are indented:

Golden-crowned Sparrows (Zonotrichia atricapilla) are migratory songbirds that breed in the north (Alaska, BC) and winter from southern BC to Baja California. For the past 14 years, my students and I have been studying a population of sparrows that winter right on our campus, on the University of California Santa Cruz Arboretum. The key feature of the study is we band each sparrow with its own unique color band combination—like an avian social security number. This allows us to recognize, census and observe known individuals in the field without having to catch them to read band numbers. Color banding for individual recognition, first adopted in the 1930s, revolutionized the study of birds because biologists could focus on studying individual variation. Margaret Morse Nice’s famous song sparrow study was one of the first of these studies. More recently, color banding was an essential part of Peter and Rosemary Grant’s study of natural selection in Darwin’s finches. Our focus with the sparrows is more modest—we want to understand aspects of their winter social behavior, including plumage signaling, winter singing and patterns of social organization.

Below: The habitat at the UCSC Arboretum. The sparrows feed on the ground close to bushes so they can dive for cover whenever a raptor shows up. A pair of bird-eating Cooper’s hawks lives in the Arboretum, so this happens often. 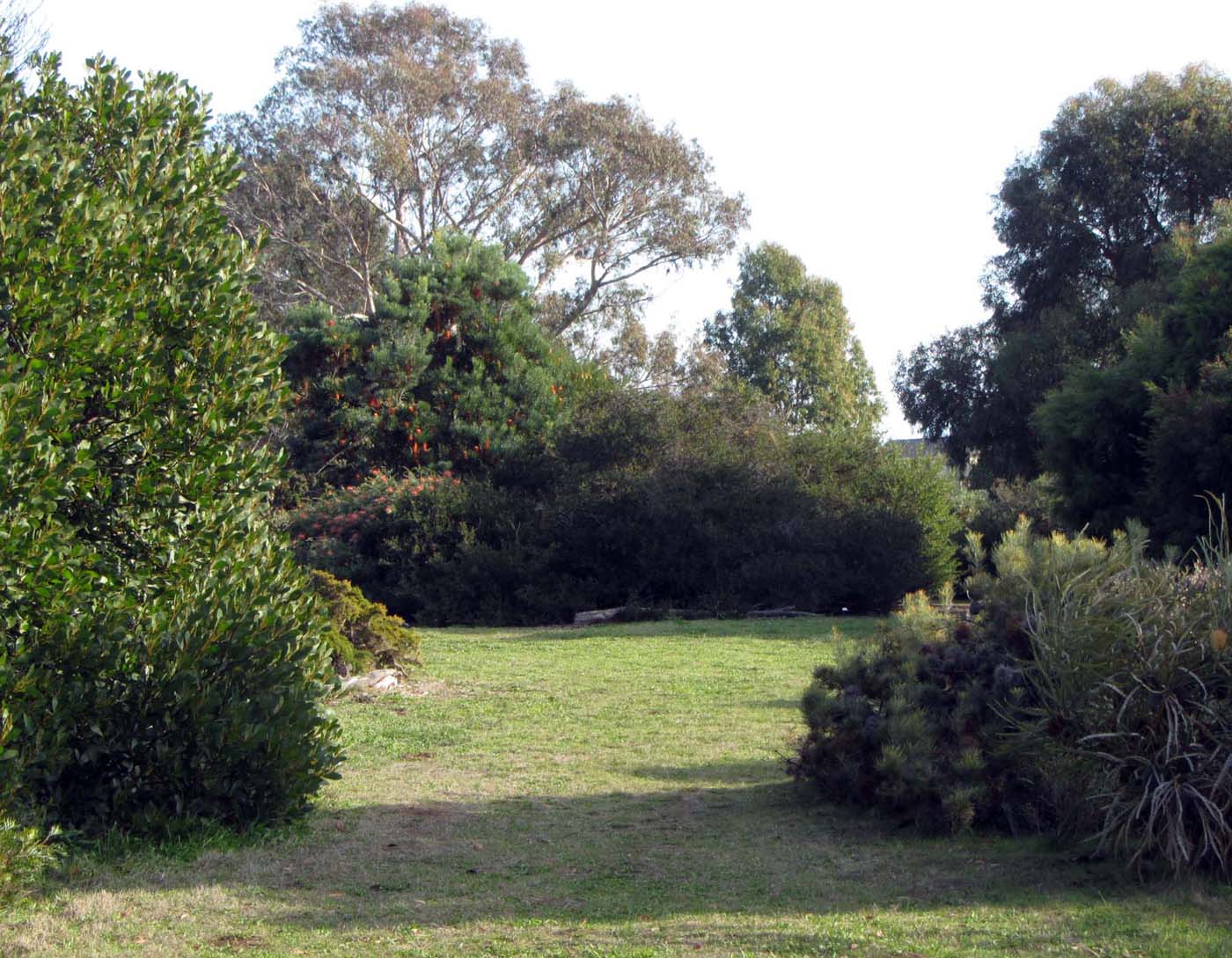 Below: A color banded sparrow: red over green on the left leg, yellow over metal on the right. Only this bird has this specific combination and order of bands. By law, all banded birds must also receive a metal band (stamped with a unique number) provide by the Bird Banding Laboratory of the US Geological Survey (USGS). 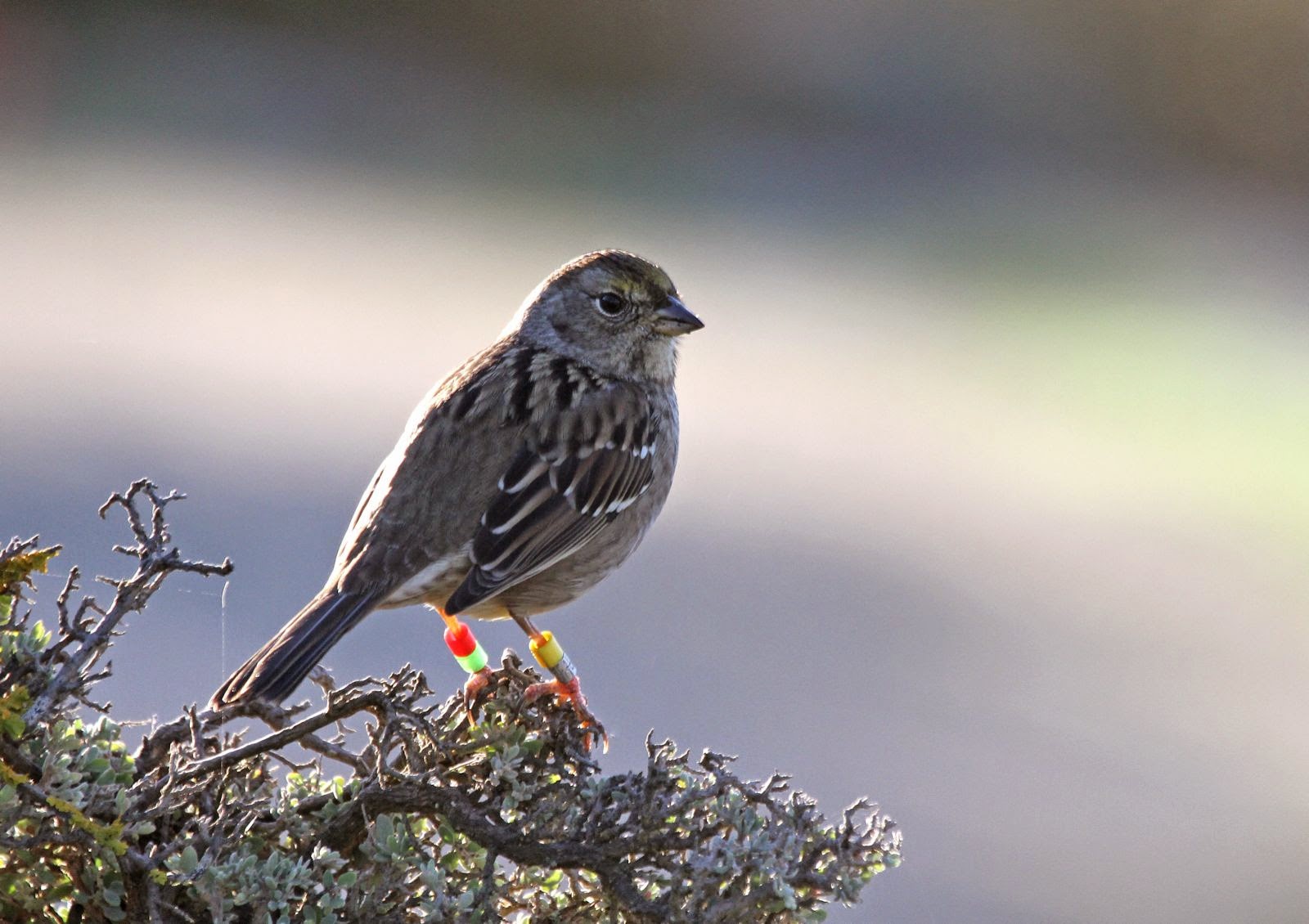 Below: Another banded bird—violet over orange on the left, violet over metal on the right. The bands we use are not real bird bands but a kid’s toy. Official color bands are expensive ($0.25 per band) but ornithologist Geoff Hill discovered a cheap work-around: the plastic Perler beads kids melt to make artwork make great bird bands, at least for birds with the right leg size. They are a thousand times cheaper than real bands. 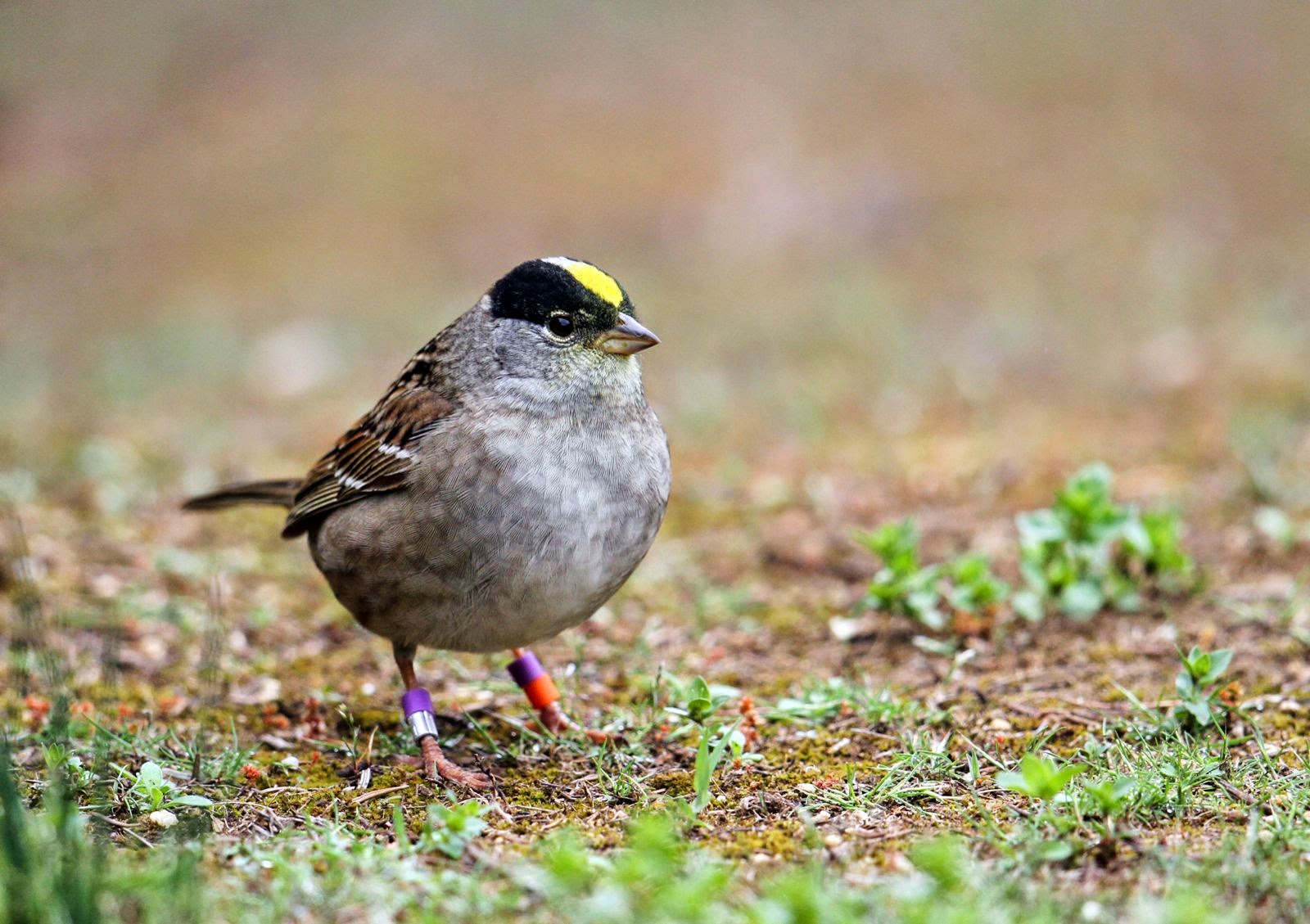 We use Potter traps to catch the birds for banding and measurement, and we build our own traps. We bait the traps with millet seed and when a bird goes in for the ‘free’ food, it steps on a treadle which releases a bar holding a trap door open, and the door then snaps shut due to gravity. No such thing as a free lunch.

Below: a couple of Potter traps waiting for customers. 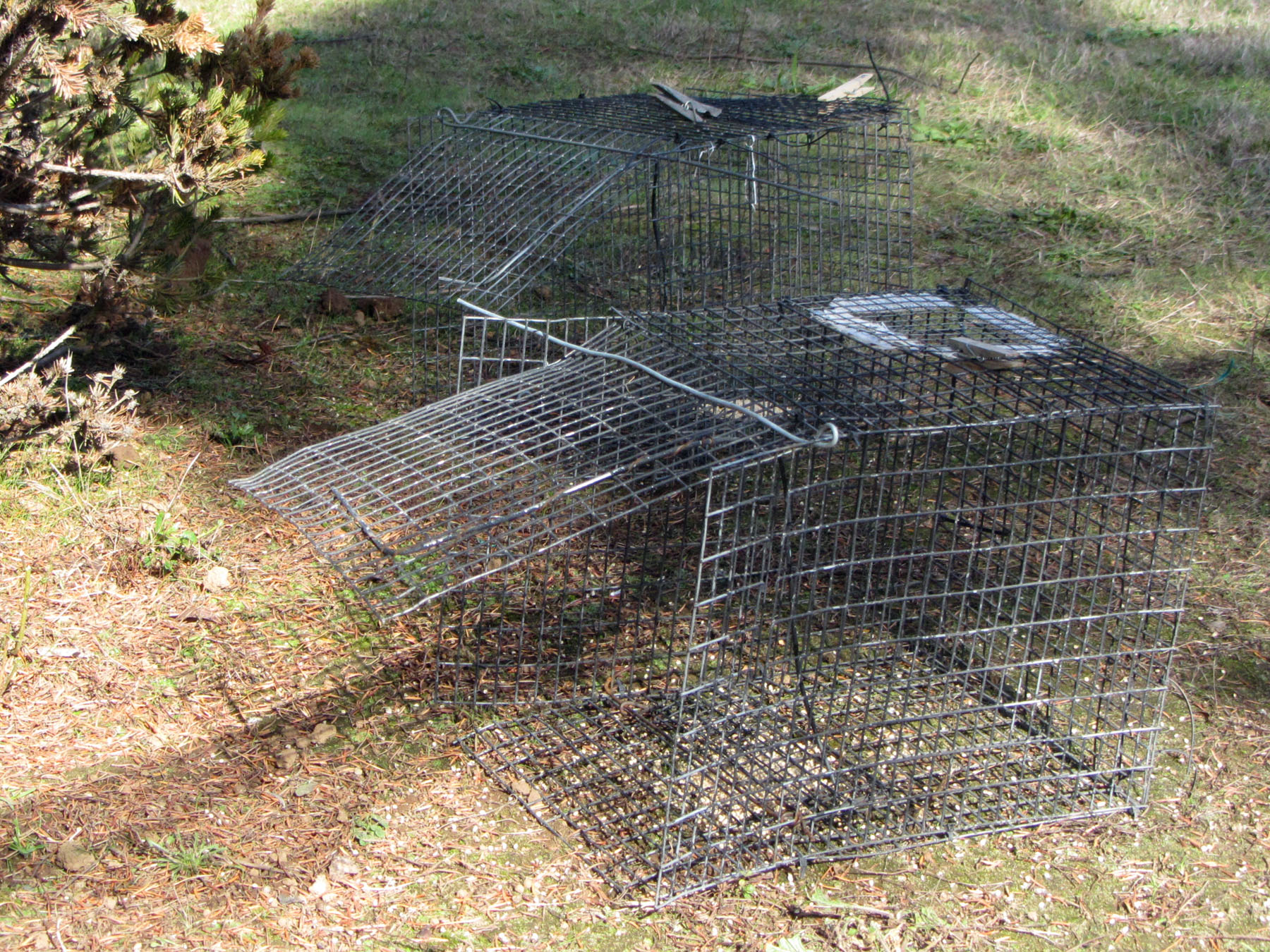 Below: A sparrow in the hand is worth two in the bush, because it shows nicely why they are called golden-crowned sparrows. 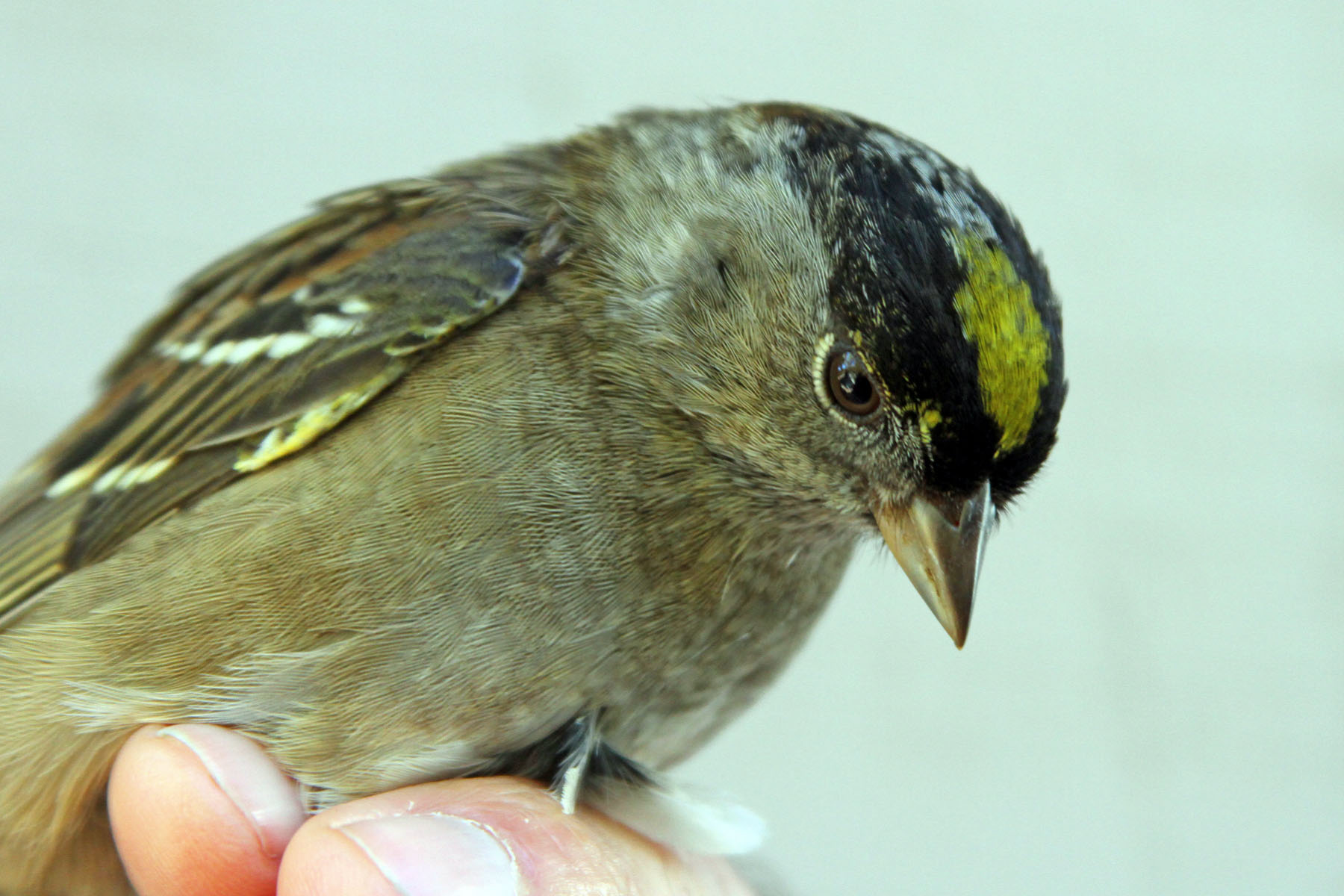 Below: A color-banded sparrow visits a Grevillea flower (native to Australia) to drink nectar. These sparrows also eat a lot of leaves and grass, an unusual diet for a small songbird. This diet often leaves a mark on us during banding—the birds donate gifts of bright green poo that invariably lands on our clothing. One interesting finding from our banding study is that the same individual birds return year after year to their same patch of the Arboretum. The survival rate across years is something like 50% and our oldest birds have been about 5 or 6 years old. 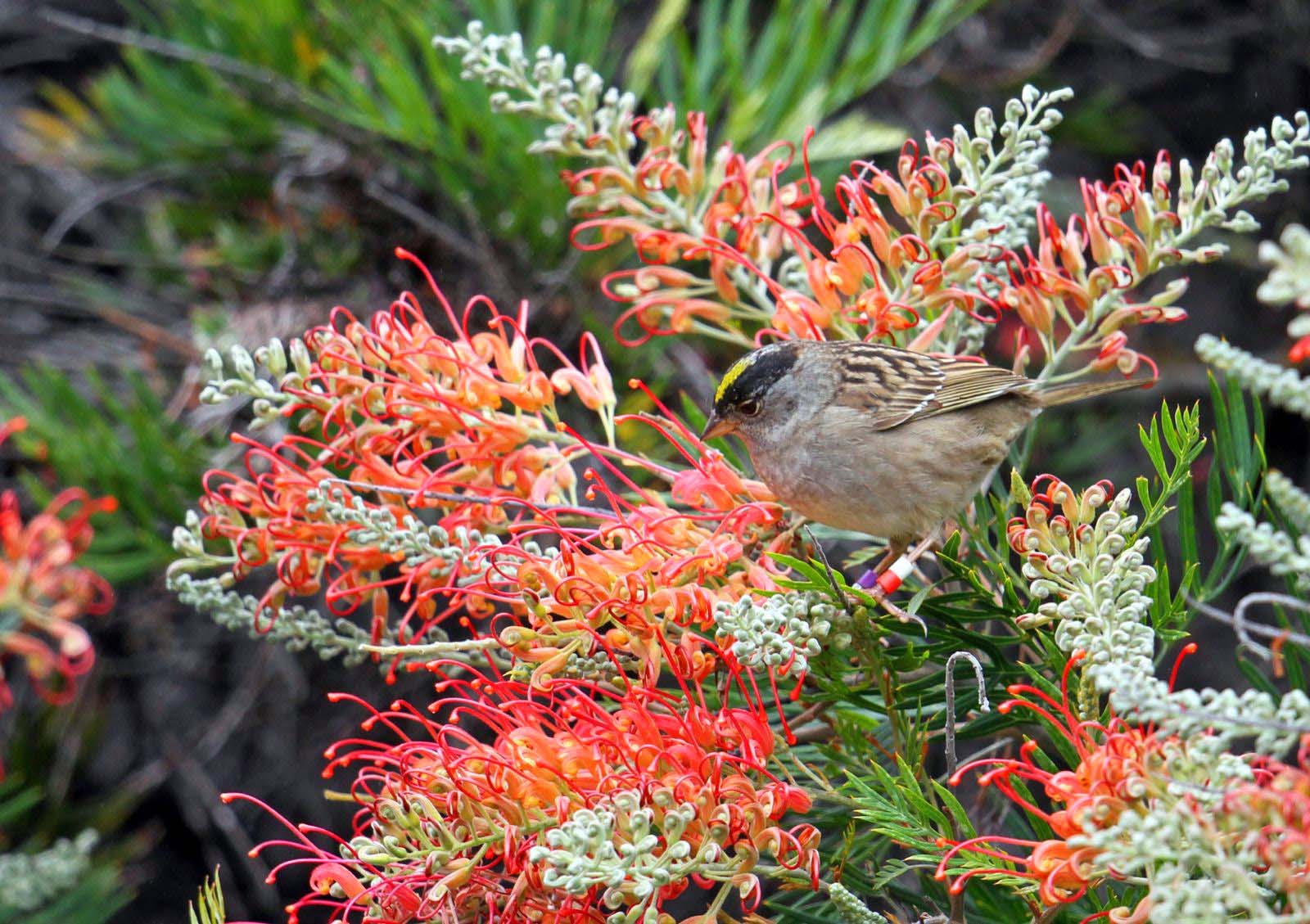 Below: Bird banders have long known that golden-crowned sparrows show tremendous variation in their crown plumage. Some birds have brown rather than black stripes, and there is also variation in the size of the stripes (some birds even lack stripes altogether). The color and amount of gold also varies. Some of this variation reflects age (yearlings are always dull) but some birds remain dull for life. This plumage variation is also specific to winter (and grown specifically for winter in a fall molt); breeding birds show much less variation.

Below: A bird with a boldly colored crown bows to show its crown patch to another bird just out of view. These crown displays suggested that the crown patches might have a signaling function, and we showed that the size and color of the crown patches are signals used to determine social dominance in contests over food. These signals of fighting ability are called ‘badges of status’ and they have been previously observed a wide diversity of animals: wasps, lizards, fish, birds and mammals. 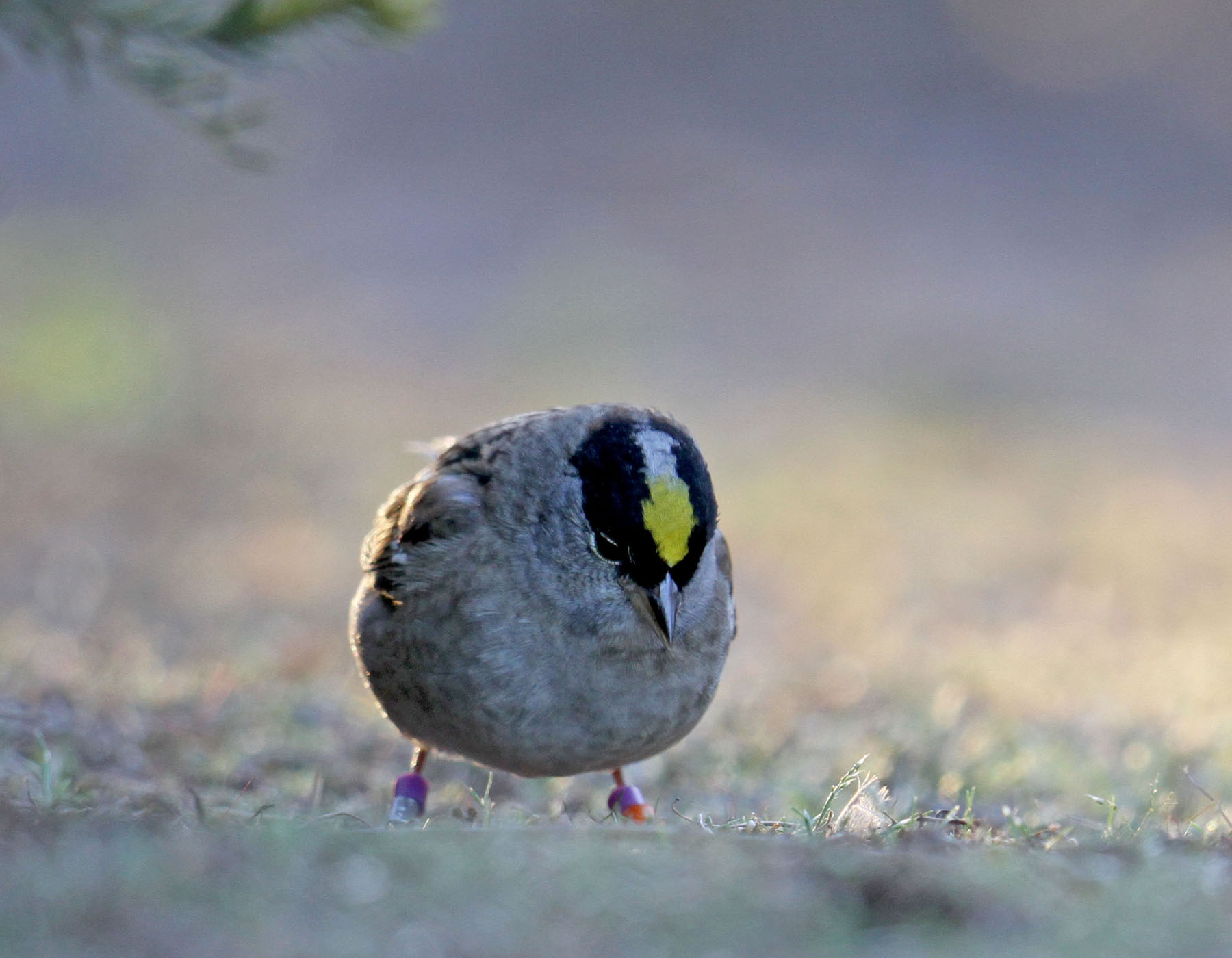 Below: An interaction over food with a clear winner. The departing wimpier bird had been feeding at a little seed pile when a dominant bird then showed up and displaced it. Observing lots of interactions like this showed us that the boldness of the black and gold crown patches is a good predictor of dominance. A badge of status signaling system is thought to be favored by natural selection because it allows the birds to figure out who would win a fight over a resource without actually having to engage in a risky fight. A key question remains: how is this signaling system evolutionarily stable? Put another way, why don’t subordinates simply cheat by looking studly? We don’t know the answer yet but possibilities include: punishment (dominants discover and punish cheaters) or physiological costs to producing the bold signals that are too expensive for wimps. 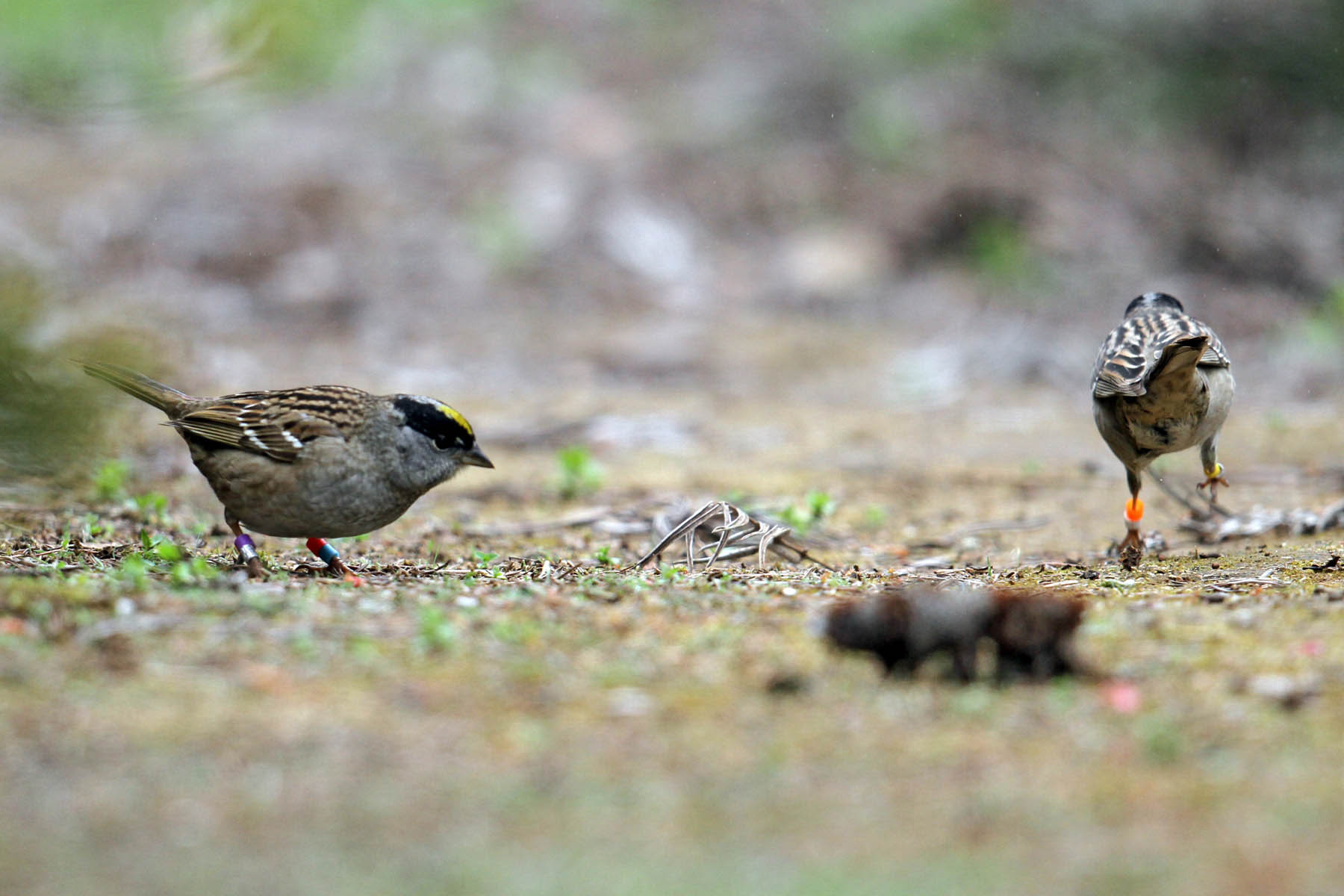 Below: A sparrow gets an experimental black unibrow. We needed to do experiments to be sure that the birds actually use the plumage to settle contests, and not some other feature. For example birds with bold signals tend to be a bit larger so perhaps they use size to assess each other. Experimentally altering the plumage features allows us to decouple plumage effects from all other features. We did trials with two birds that were matched by plumage and then randomly chose one to make studlier. We also had to trap the two birds in each trail from different areas to make sure that they had not previously met—we needed to be sure that they do no have previous information about each other that could influence the outcome.  The results of the experiments were impressive: simply by making birds appear more studly with a Sharpie increased their chances of being the socially dominant bird from 50% (the random expectation) to 95%! At the end of the experiments we removed the Sharpie markings with alcohol and set the bird free. 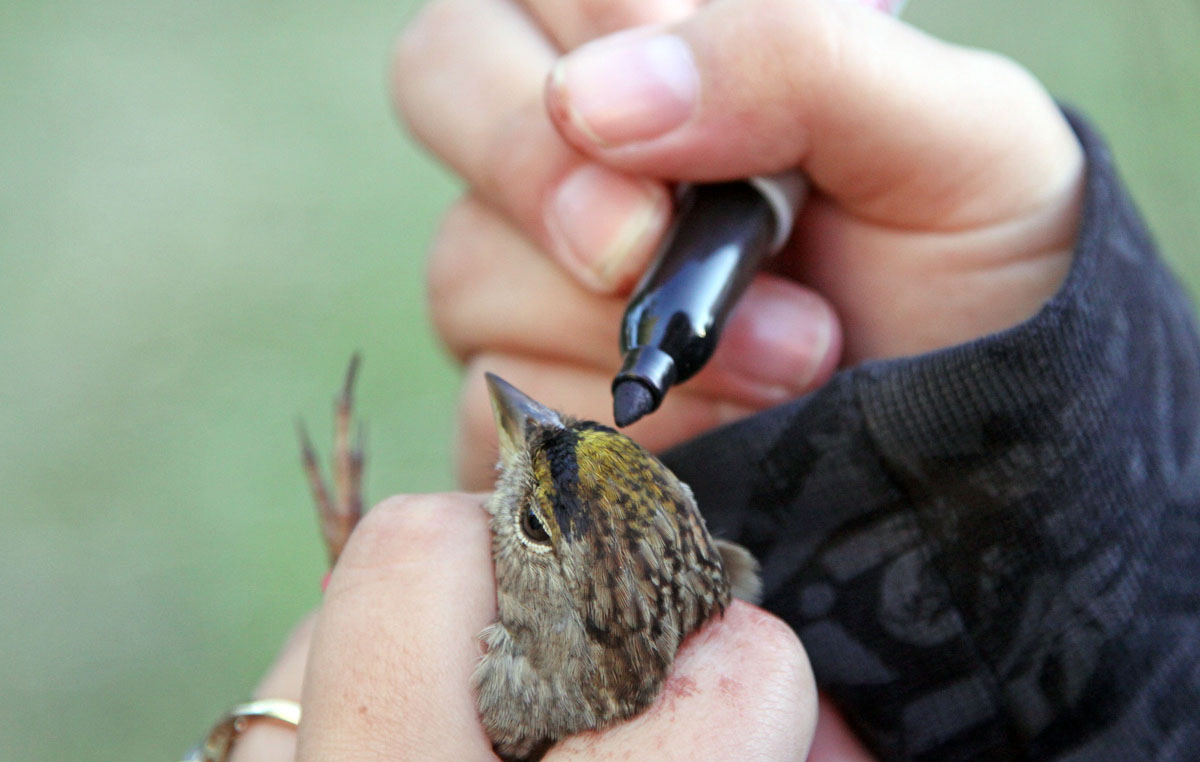 Below: A bird gets a gold comb-over with paint. Yuge patch! Best plumage ever! This bird is going to win fights bigly! As with the Sharpie, this treatment increased the probability of being dominant from 50% (random expectation) to 95%. The treatment also increased a bird’s tendency to want to build walls around the seed piles. 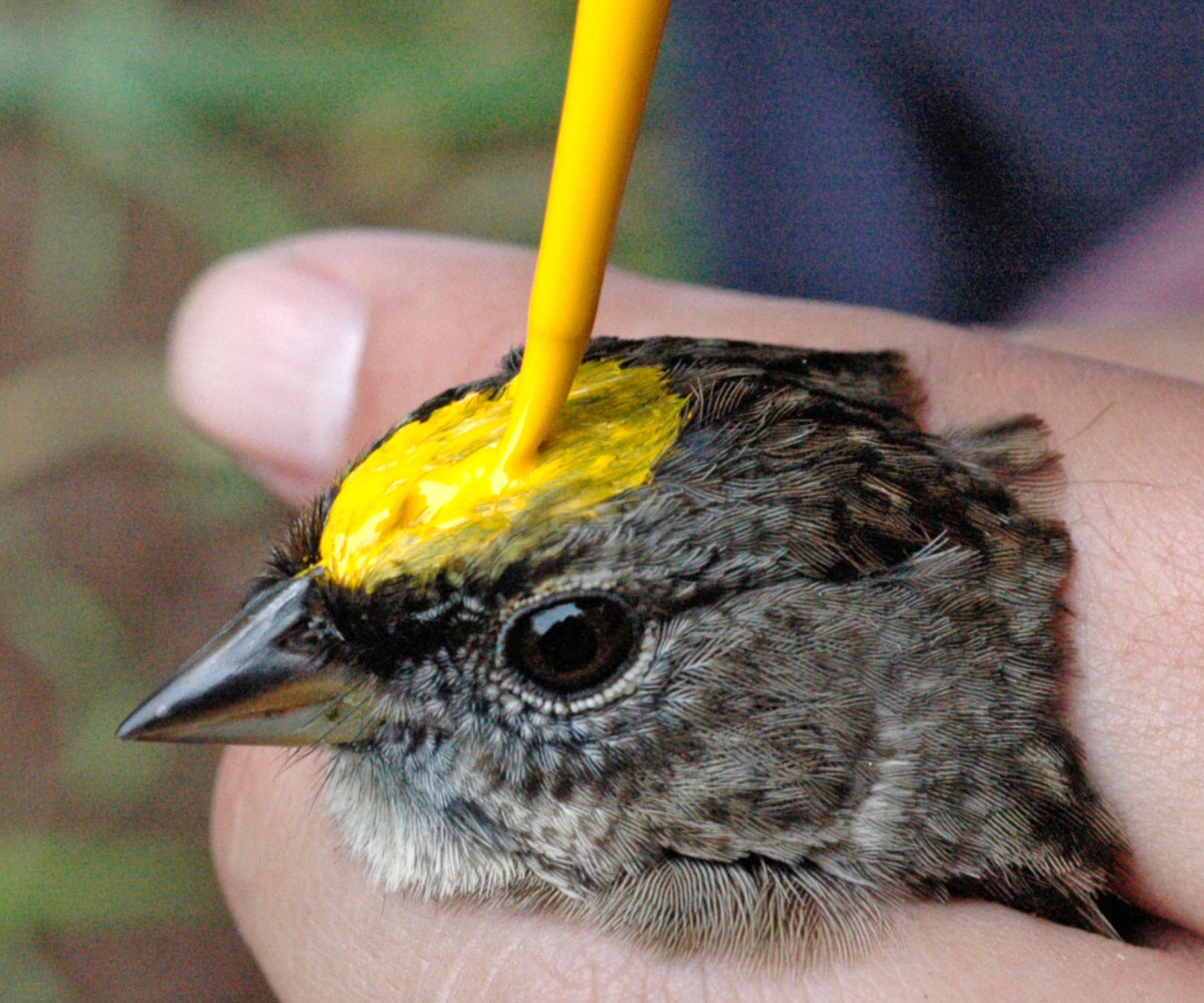