It’s not just Leftist apologists who claim to know who “real Muslims” are, dismissing those who practice or espouse terrorism, for instance, as “not real Muslims,” or “not practicing true Islam.” Muslims themselves are even stronger discriminators, and that’s been true since Shia and Sunni split centuries ago. In fact, members of different sects regularly kill each other for being the “wrong kind of Muslim.”

But there’s another kind of Muslim subject to demonization: the practitioners of Ahmadiyya, a form of Islam that began recently: in Punjab in the 19th century. The discipline follows the teachings of Mirza Ghulam Ahmad (1835-1908). Followers are called Ahmedis (or Ahmadis), and Sunnis, at least, don’t see them as real Muslims. In fact, the Constitution of Pakistan explicitly declares Ahmedis to be non-Muslims.

As you may know, the actor Mahershala Ali won the Best Supporting Actor award for his performance in Moonlight. However, Ali is an Ahmadi, i.e., not a “real” Muslim. (He converted after being raised a Christian in California.)

This led to some awkwardness. For instance, the Pakistani director Hamaz Ali Abbasi congratulated Ali on his Oscar, but then felt it necessary to point out their religious differences in a tw**t:

That’s absurd. Can you imagine an Episcopalian congratulating a Catholic or a Methodist who won an Oscar by noting that “well, you believe you’re a Christian, but I strongly disagree”? They may think that, but I doubt you’d see it tweeted, much less used as a basis for murder. To see the extent of the rancor against Ahmedis, read Maajid Nawaz’s Daily Beast article about the murder of Asad Shah, an Ahmedi who was murdered—in Scotland—by a Sunni who, like Pakistani Sunnis, consider Ahmedis as blasphemers.  In that article Nawaz shows how far the oppression of Ahmedis has gone in Pakistan, and, along the way, shows how radicalized British Muslims are:

Any British dual-national seeking to apply for a passport, or even an identity card, to travel to Pakistan visa-free is asked to partake in the persecution. Upon applying for our papers we are expected to sign a declaration (PDF) attesting— among other religious interferences by the state—that “I consider Mirza Ghulam Ahmed Quadiani [the faith’s founder] to be an imposter nabi (prophet) and also consider his followers whether of the Lahori or Qadiani group to be non-Muslim.” Hundreds of thousands of British-Pakistani Muslims have had little choice but to participate in this ritual that normalizes the Blasphemy Inquisition, in order to gain their identity cards.

If we contextualize Asad Shah’s murder by placing it in this hostile climate, as we must, then we begin to realize the horrifying level of persecution facing those deemed heretical, such as Ahmedis or other “blasphemers.”

Over the years, in survey after survey, British Muslim attitudes have reflected dangerously high levels of support for enforcing “blasphemy” taboos. A 2007 poll found that 36 percent of young British Muslims thought that apostates should be killed. A 2008 YouGov poll found that a third of Muslim students claimed that killing for religion can be justified, while 33 percent expressed a desire to see the return of a worldwide theocratic Caliphate. A ComRes poll commissioned by the BBC in 2015 found that a quarter of British Muslims sympathized with the Charlie Hebdo “blasphemy” attacks.

Here’s Nawaz’s own tweet calling attention to Ali’s faith, but not in a nasty way:

The upshot: as reported in several places, including the Express Tribune (mentioned by Nawaz in a subsequent tw**t), Maleeha Lodi, a Pakistani political scientist who is her country’s first female representaive to the United Nations, at first tweeted a proud encomium for Ali, but then deleted it. She apparently didn’t realize that Ali wasn’t a “real Muslim” according to her country’s laws. Nothing to be proud of, then!

Here’s the deleted tweet as reproduced in the Hindustan Times: 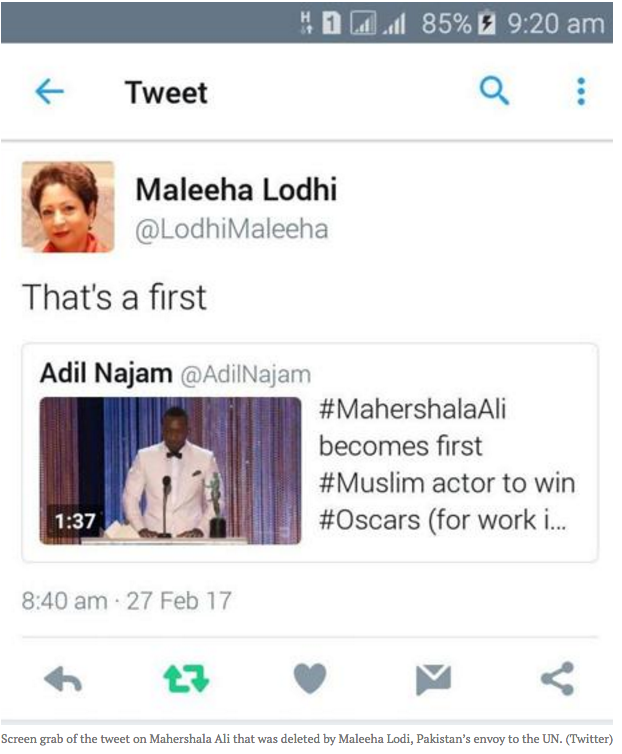 I wonder if the tweet would have been deleted had Ali been a Shia Muslim? But no matter; it shows that even a single “faith” is irreparably divided. But beyond getting the Oscar, Ali is lucky in another way: he lives in the U.S., where he’s unlikely to be killed for his blasphemy.

Here’s Nawaz’s own tweet, saying that the deleted congratulations was as if he “saw the future”:

^as if I saw the future:Pakistan's rep at UN deletes tweet congratulating Mahershala Ali after realising he's Ahmedi https://t.co/cI6myQn45r