If you saw the headline below on a website, you’d think it was from the Huffington Post, right? The combination of fashion news (with Muslim attire called “modest wear”), gratuitous editorializing, and fetishizing of the hijab and body covering are all characteristic of that liberal clickbait site.

But if you click on the headline, you’ll see that it goes to The Independent, which, like the Guardian, is converging on the HuffPo model. In fact, the author of this piece, Sana Sarwar, a Muslim woman who wears the hijab, used to write for HuffPo. Now she brings her osculation of faith to The Independent:

Sarwar first decries the plainness and ugliness she found in “modest” clothing:

Ten years ago, as a hijabi (headscarf wearer), I faced the constant battle to find clothing that looked good and didn’t compromise my religious beliefs. My wardrobe often consisted of plain, boring and oversized tops, straight leg denim jeans, neck scarfs that doubled as makeshift hijabs, and a mountain of maxi skirts I care not to count. I yearned for modest clothing that was easy to wear and didn’t require layering – a must for sheer fabrics. It’s fair to say I was a walking fashion disaster; even Trinny and Susannah would have refused to help me. However, since then, modest fashion has taken the industry by storm and is now becoming widely celebrated.

You might see a problem here: the religious beliefs that dictate the hijab do so for one reason—to keep women from calling attention to their looks by covering their hair—and often much of their body. Certainly Sarwar has a right to wear a headscarf up top and attractive and fashionable clothes below, but she shouldn’t pretend that wearing such clothes doesn’t compromise the very reasons that dictate hijabs: to prevent women from exciting the supposedly uncontrollable lust of men. Garments like the hijab aren’t just the symbol of oppression; they are oppression, for they’re dictated by male-dominated religious custom—a custom that holds women responsible for reducing the hormone titer of the dominant sex.

Sarwar then extols the UK’s “London Modest Fashion Week,” catering not just to Muslims but “anyone  from any faith looking for a more demure look.” She criticizes the burkini ban, notes that celebrities such as Adele have sometimes opted for less revealing clothing, and then says this:

Modesty is not to be forced on anyone and means different things to different people, but always remains a choice for women.

Well, modesty should be a choice for women, but somehow Sarwar fails to mention that it is forced on millions of women, not just in countries like Iran, Saudi Arabia and Afghanistan, where covering is legally required, but also on women in other Muslim countries and the West, who are forced by social, family, or peer pressure to cover themselves. Those who say that wearing hijabs is a “choice” fail to recognize that more often than we think it isn’t—not in the sense that in the absence of social pressure, many women wouldn’t wear one.

The article gives some examples of “modest” models during Modest Fashion Week, and I have to say that they don’t look either particularly modest or garbed in a way that avoids drawing attention to themselves. The clothes are loud, glittery, and the women plastered with makeup. Do these women exemplify the “empowering” modesty praised by Sarwar, who says this?:

There is no doubt that we are seeing more demure looks in today’s industry as the hijab and modest wear trend enter popular culture. They are a celebration of the inclusion of diversity in modern fashion. To see Muslim women and popular fashion brands leading the way to provide more choice for all women is truly inspiring. 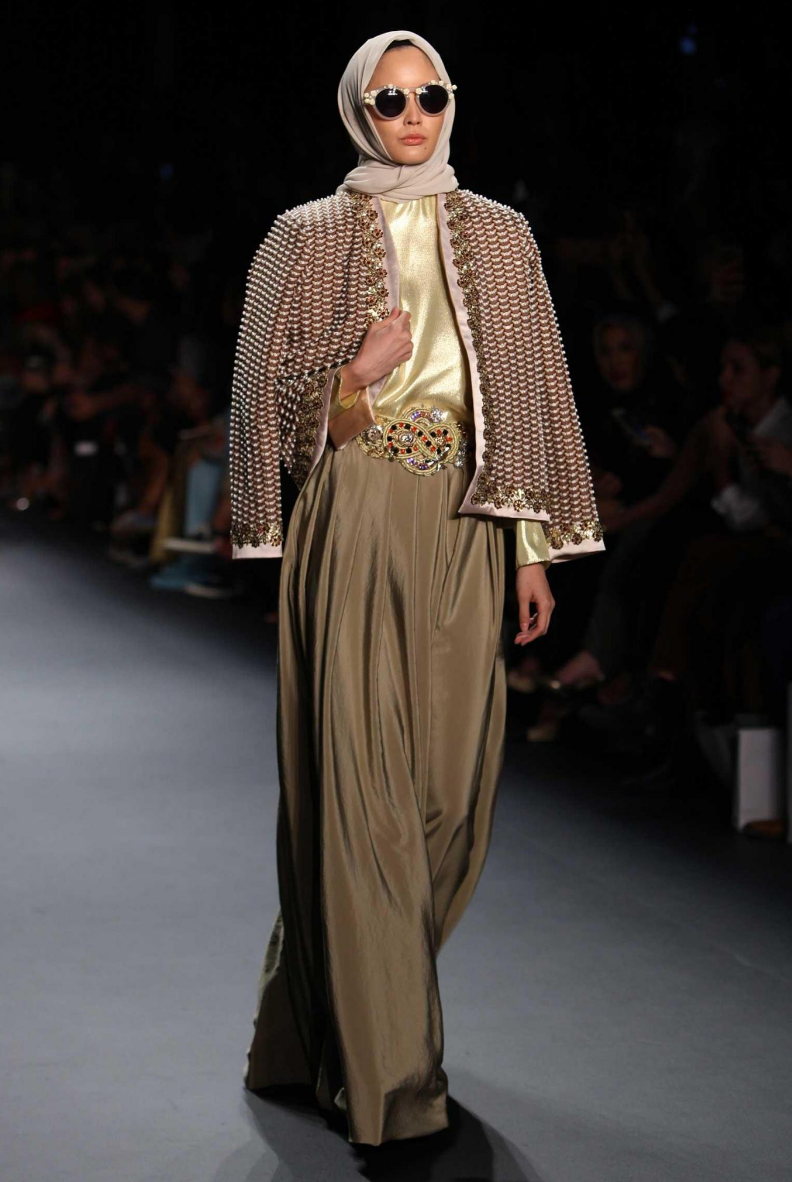 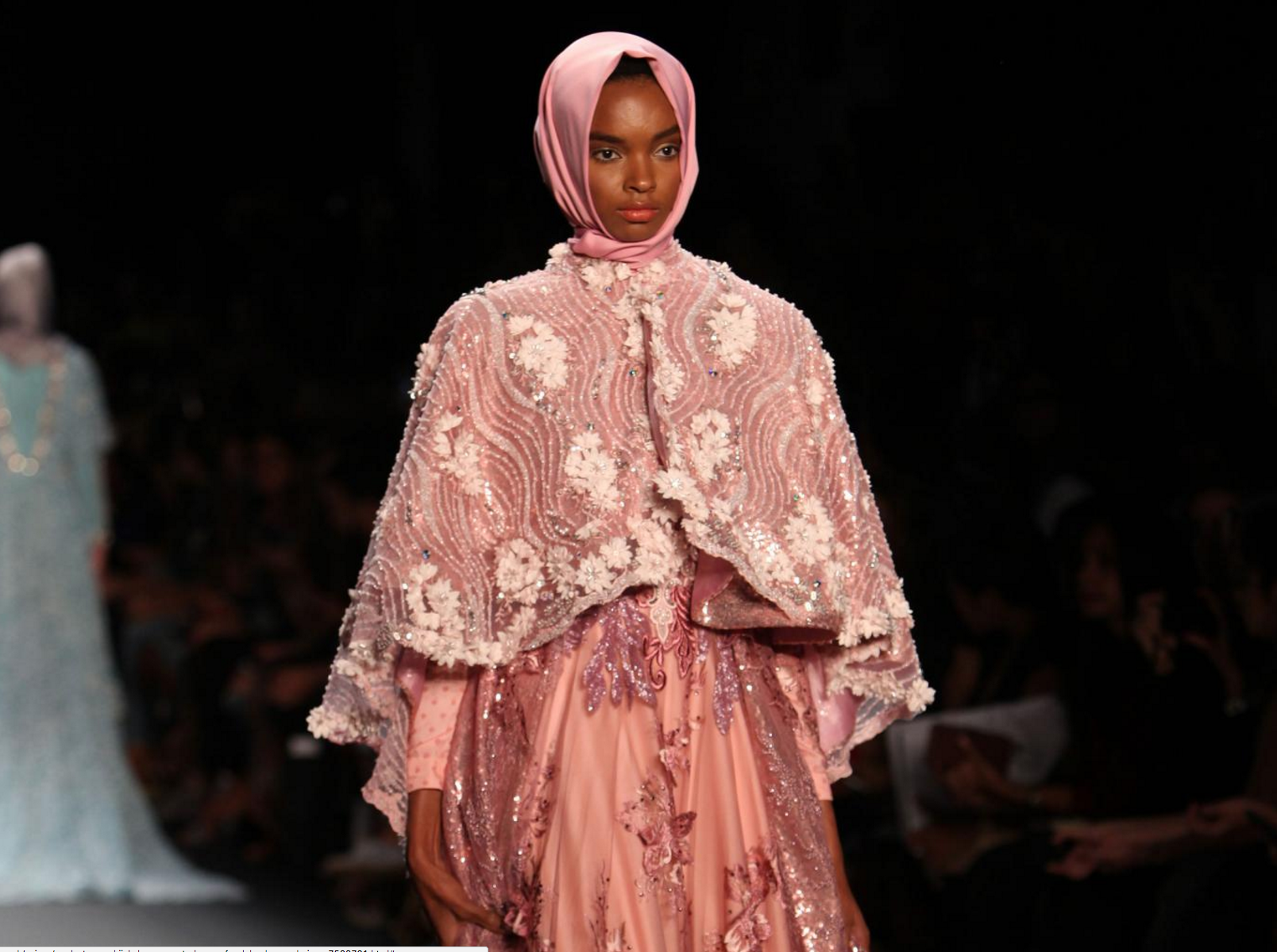 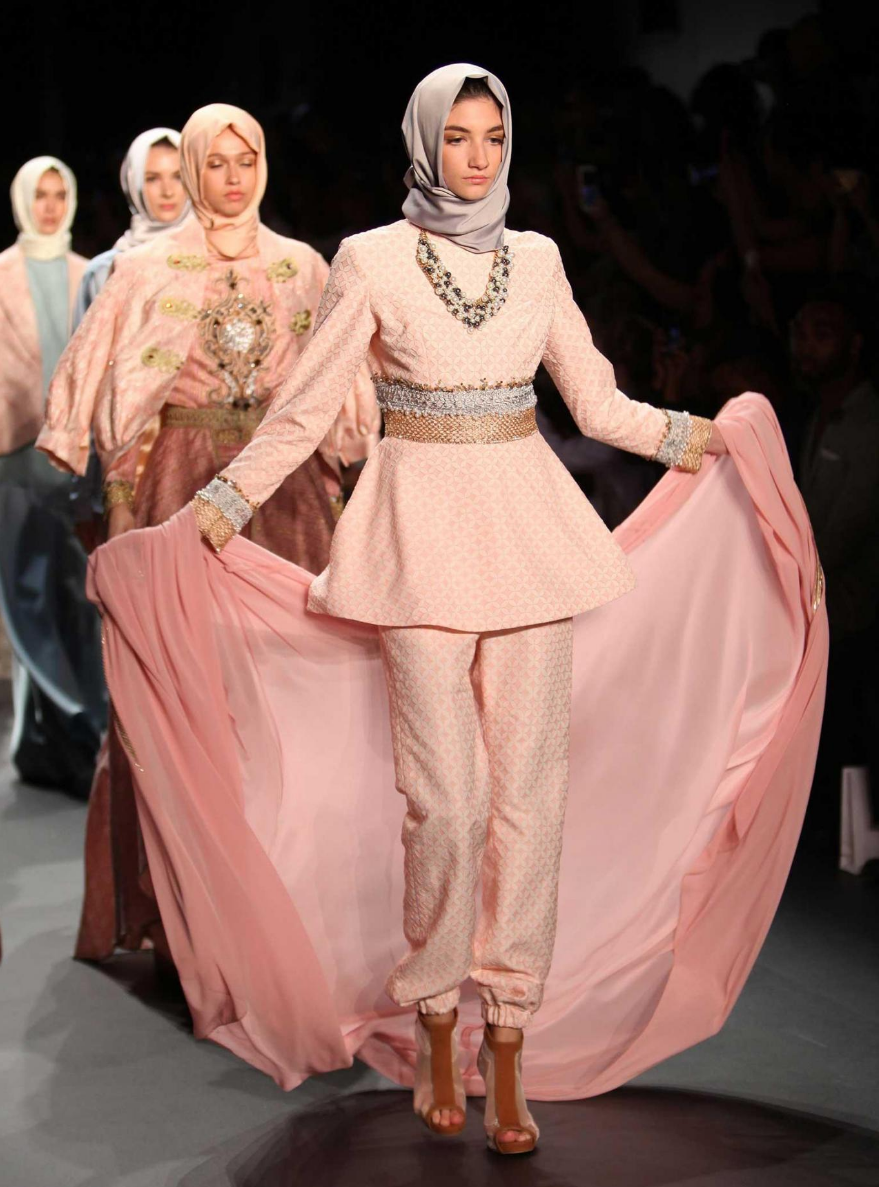 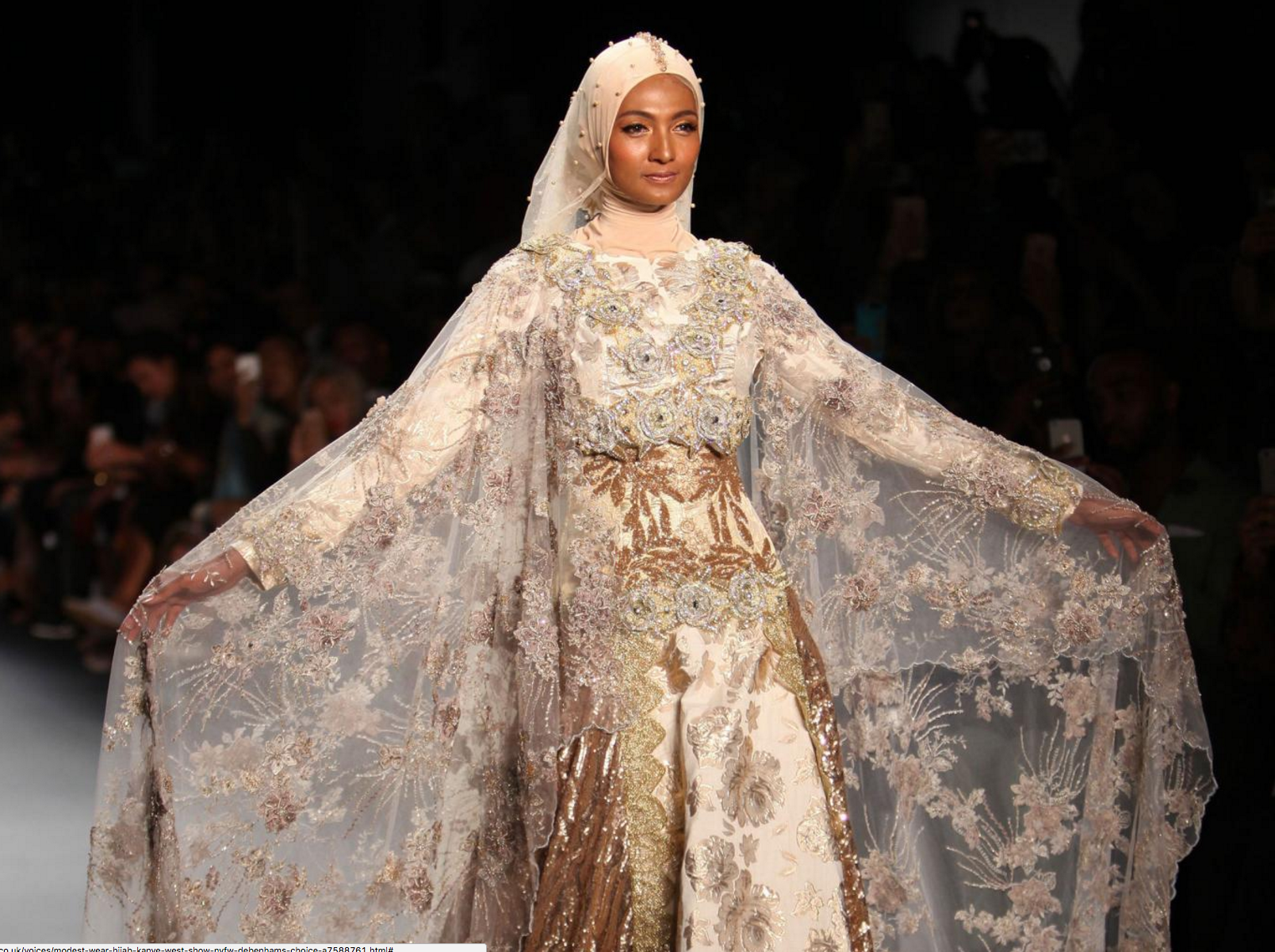 As I said, women should certainly be free to choose what they want. And if they want, they can wear the hijab as a symbol of their faith while wearing flashy garb below the neck. But they shouldn’t pretend that there’s not a form of hypocrisy produced by the disparity between the religious reasons for wearing hijab and the secular reasons for wearing clothing like that on the models.

Finally, I object to the phrase “modest wear”. Does this mean that other clothing, like dresses or blouses that reveal a woman’s arms, are “immodest wear”? Perhaps those should be called “slutwear”!

Does it always have to be right-wingers who call out Islam for its oppression of women? I don’t like being in bed with these people, but occasionally they’re right. Marine Le Pen, the conservative French politician and National Front leader whose anti-immigrant stand and coddling of Syria’s President I find odious (she inherited her policies from her father Jean-Marie, but has tempered them a bit), just showed a resolve lacking in the Swedish politicians who visited Iran. While the women in the “feminist government” donned hijabs without a problem, Le Pen refused to wear a hijab when invited to meet the Grand Mufti of Lebanon. The requirement that she don the headscarf led her to cancel the meeting. As Reuters reported:

After meeting Christian President Michel Aoun – her first public handshake with a head of state – and Sunni Prime Minister Saad al-Hariri on Monday, she had been scheduled to meet the Grand Mufti Sheikh Abdul Latif Derian

He heads the Dar al-Fatwa, the top religious authority for Sunni Muslims in the multireligious country.

“I met the grand mufti of Al-Azhar,” she told reporters, referring to a visit in 2015 to Cairo’s 1,000-year-old center of Islamic learning. “The highest Sunni authority didn’t have this requirement, but it doesn’t matter.

“You can pass on my respects to the grand mufti, but I will not cover myself up,” she said.

The cleric’s press office said Le Pen’s aides had been informed beforehand that a headscarf was required for the meeting and had been “surprised by her refusal”.

It always irks me that many feminists—who would excoriate anyone who told them how to dress—will cave in when they’re dealing with religious authorities. I think it’s okay to bow to religious custom when entering a house of worship like a mosque or synagogue, but not when entering a country.