Over the past five years I’ve written several posts on the long-standing and vexing question, “Why on earth do zebras have stripes?” (See posts here, here and here.) If you’ve read those posts, you’ll know about the experiments that seemed to settle the issue, or at least that gave a good indication of the evolutionary forces that promoted the evolution of this striking pattern.

One clue is shown below: a figure from a paper that I described in an earlier post (my emphasis). The top part shows the distribution of various striped equids in Africa (the green and orange are unstriped Asian equids) and the bottom shows range maps of two groups of biting flies: tabanids (horseflies) and Glossina, the tsetse fly; both of these carry equine diseases and also promote infections and blood loss. As I wrote at the time (my emphasis):

Here’s the association between the historical (not present!) ranges of equids and of tabanids and tsetse flies; equids at top (zebra ranges striped!) and flies at bottom. Note that tsetse flies (Glossina) aren’t found outside Africa. E. kiang is an unstriped wild ass, E. africanus is the African wild ass, having thin stripes on its legs, E. hemionus is the onager, an unstriped wild ass, and E. ferus przewalskii is Prezewalski’s horse, a rare wild horse thought to be the closest living relative of the domestic horse.

Note, too, that unstriped equids don’t generally coexist with either kind of fly, though the African wild ass, which does have thin striping on its legs, does live in areas with horseflies. 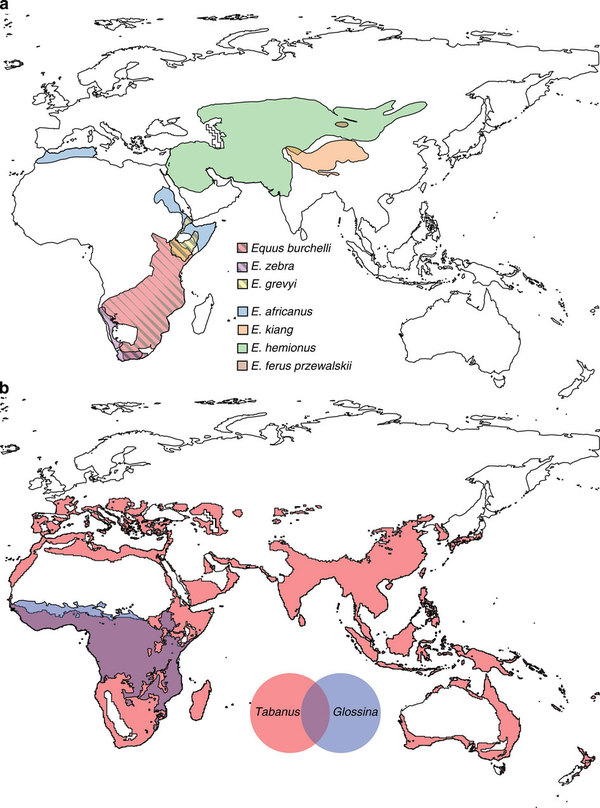 This is a correlation, not a causation, but an earlier experiment (link given below) showed that these flies indeed do avoid landing on striped surfaces. We’re not quite sure why.

Now the entire issue, and all the various hypotheses that have been raised, are discussed in a new book, Zebra Stripes by Tim Caro, which itself is summarized in a new piece in Wired magazine, “The man in the zebra suit knows the secret of the stripes.” The book is shown below, but, as Wired notes, it’s not written for the layperson:

This is not a book for casual pop science readers. It is a book about doing science, full of every detail you’d need to reproduce any of the experiments done in the book: distances for viewing pelts; reflectance values for zebra hair; thermal camera settings for taking infrared pictures; speaker settings for playing predator noises; histograms, leaf and tree diagrams, scatter plots; page after page of references. This book is for scientists, or those who wish they’d become scientists. And as treats for the latter, there the anecdotes of Caro’s scientific antics: Tales of how he systematically worked through each hypothesis until he figured out the secret of the stripes. 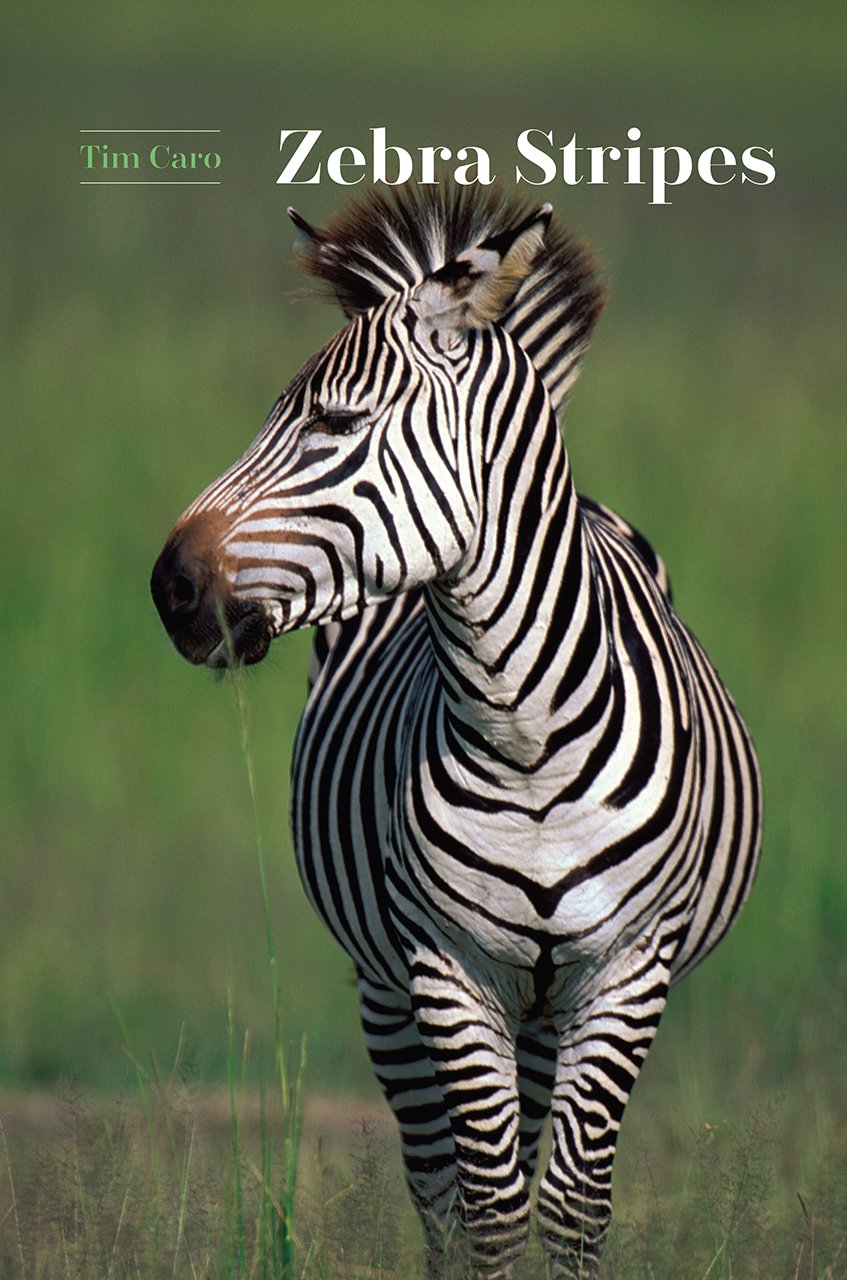 But that’s okay, for if you’re not a scientist, the Wired article is a good description of all the hypotheses raised about the pattern (Alfred Russel Wallace was the first to consider its evolutionary advantage) and how they were tested and refuted, winding up with what seems to be the correct idea. I’ll just list the leading hypotheses and you can read about the tests at Wired.

And indeed, the last hypothesis seems to be the right one. As the Wired article notes, Caro did a cool experiment, though he risked incarceration! (There were of course other experiments too.)

Looking back on how he wound up walking down a dusty Tanzanian road in the midday sun draped in a zebra pelt, Caro admits he should have consulted an insect expert. “I knew from the literature that certain kinds of biting flies didn’t like landing on black and white surfaces,” he says. He also knew that the insects were attracted to movement. So, he would put on the pelt, trudge for an hour, and have his assistant count the number of tsetse flies that had landed on him. For science, he did the walk again, draped in a wildebeest hide.

And? “I really started to see results at this point,” he says. The flies did not like the stripes! “It was an elevating experience, at last after ten years working on this project I started to see a positive effect on one of these hypotheses.” He did more experiments, including setting up striped fly traps (no more walking down dusty roads). With each new experiment, the evidence lined up to support the anti-insect hypothesis. Eventually, Caro and his colleagues did a map analysis, overlaying the ranges of various biting flies and insects with the places where zebras, and their non-striped cousins like the Asiatic wild ass, ranged. “It’s a slam dunk, if you like,” he says. “You find striping where you have high biting fly abundance.”

Caro has no lingering doubts about the connection between flies and stripes. Now, he wants to find out exactly how the flies forced the stripes’ evolution. One question is about the flies—why are they repulsed by black and white? Another is whether the zebras adapted this anti-fly defense because they are particularly susceptible to blood loss, or to diseases the flies carry. Not so annoying anymore.

I summarized Caro and his colleagues’ 2014 Nature paper on the fly hypothesis (the paper was tersely called “The function of zebra stripes“) in an earlier post, from which the range maps above were taken. (See also a suggestive 2012 paper in the Journal of Experimental Biology by Ádám Egri et al.)

I think Caro’s conclusion is pretty strong, but not quite so strong as to say, “We needn’t do any more experiments.” Still, the Fly Hypothesis is the best one going, and if you take no other lesson from this post, just remember that zebras probably have stripes to ward off biting flies.

Here’s Caro in his zebra suit, looking for all the world like an escaped prisoner. What sacrifices we make for science! 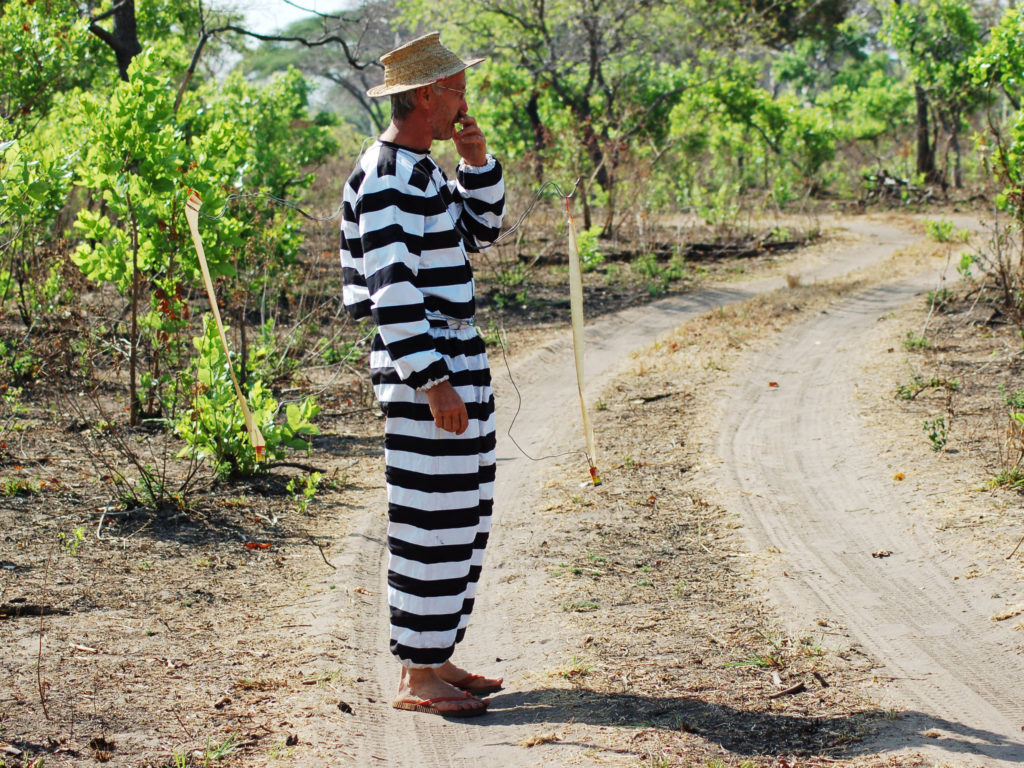