Africa harbors three living species of zebras: the plains zebra (Equus quagga), with several subspecies, the mountain zebra (Equus zebra), and Grévy’s zebra (Equus grevyi). The taxonomy of the group is in fact disputed, as distinct species sometimes produce fertile hybrids when they live in the same place, but let’s not worry about that now. The most distinctive feature these species have in common is, of course, their stripes: they are the only fully-striped members of the genus Equus (zebras, horses, and asses), a group containing eleven species. Here’s what the three zebras look like (notice the difference in pattern):

Now why do they have stripes? If you’re asking the question as an evolutionary one, then one way to pose it is to ask, “What were the selective advantages to the ancestor of modern zebras of having the striped pattern?” (Stripes evolved only once, in the ancestor of zebras, so we don’t require a separate adaptive explanation for each species.)

But that presumes that the stripes were or are an adaptation. Perhaps the pattern wasn’t selected for itself, but is a byproduct of some other adaptive aspect of the zebra’s biology. Perhaps, for instance they’re simply a physiochemical result of a developmental constraint in the production of any body color in zebras. That’s possible, I suppose; but I suspect, given the distinct pattern, that it really did confer some reproductive advantage to zebras, or does so now. Let us assume that it did and does enhance the survival and reproduction of zebras, and see if we can find an explanation of how it does so.

I’ve previously discussed one theory for the evolution of stripes: resistance to biting flies. I’ll highlight a recent paper on that soon, but today we’ll examine another widespread hypothesis: stripes provide camouflage that hide zebras from predators, chiefly hyenas (which take young zebras) and lions.

First, though, let’s list all the hypotheses for striping: camouflage; resistance to biting flies, which won’t land on striped objects (more on that this week); “species recognition,” so that the stripes help zebras find other individuals or the herd; “aposematism”: conspicuous coloration that tells predators, “Stay away! I can bite and kick!”; and a way to cool off by reducing thermal load.

The “camouflage” hypothesis is actually several hypotheses: the stripes hide the zebras in grassland or woodland, making them harder to see; or the stripes break up the body outline so predators can’t discern them as “prey”; or that the stripes confuse predators when they’re attacking a herd, making it hard to single out one individual to nom.

A recent paper in PLoS ONE by Amanda Delin et al.  (reference and link below) tests the first two parts of the camouflage hypothesis. They did this by determining the distance at which four species (lions, hyenas, other zebras, and humans) could discern the striped pattern under three light conditions: daylight, twilight, and darkness (moonless nights). (Most predators hunt zebras at twilight). They used measurements of these species’ eyes, photographs of mounted skins as well as of live zebras in the wild, and estimates of visual acuity taken from what we know about vision in domestic cats and passing photographs of zebras through filters mimicking cat’s vision.

The researchers wanted to know the distance at which the four target species (especially the hyena and lion predators) could discern the stripes. They used the “discern stripes” criterion for a good reason: predators attack from a distance, and if they can’t see the stripes at that distance, then those stripes can’t really function to hide the animal. (They could, however, still act to confuse a predator in the midst of an attack.)

The upshot: predators are lousy at discerning stripes from even moderate distances, well short of distances at which predators commit themselves to attack. Zebras and humans (especially the latter) are much better at seeing stripes at a distance than are hyenas and lions, and the ability to discern stripes gets exponentially worse as night falls.

I won’t go into all the details, but below are the data tables showing distances at which the four species can resolve stripes in open habitats—under three light conditions. The table below gives the maximum distance in meters at which stripes can be recognized in different body regions (three species of zebras, two body regions for each). The graph went across the page, so the six rows can be identified from the first shot below:

Humans are pretty good at discerning stripes in daylight, but at dusk (and especially at night), you can’t see the stripes more than 170 meters away on any zebra. 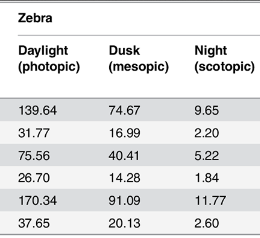 Zebras aren’t as good as humans at discerning stripes, but can still see them pretty well at daylight (at least as far enough away to see conspecifics within 75-200 meters), so maybe the stripes can help animals find their herdmates.

What the charts below show is that predators are lousy at seeing the stripes, particularly under low-light (hunting) conditions. At dusk, lions can’t see the stripes when zebras are more than 50 m away, and on moonless nights they have to be right on the zebras before they can see the stripes. Since lions commit to attack at distances much greater than 50 meters, it seems as if the stripes don’t protect zebras from being seen by lions. At distances of 50 m or more, zebras look much like unstriped prey: waterbuck and topi.

Hyenas are even more myopic for stripes: beyond about 30 meters, a zebra looks to a hyena just like any uniformly-colored prey. 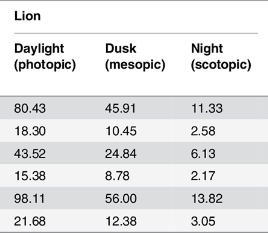 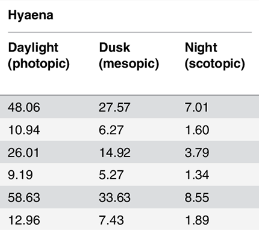 Here are some photos showing what zebras would look like to humans and lions at only 16.4 meters away. The caption is this:

Fig 3. A small group of plains zebra taken at a real-world equivalent of 16.4 m as they may appear to a human (a,c,e) and lion (b,d,f) under photopic (bright; daylight), mesopic (dim; dusk) and scotopic (dark; moonless night) conditions. Stripe visibility falls off from human vision to lion vision and as ambient light decreases. 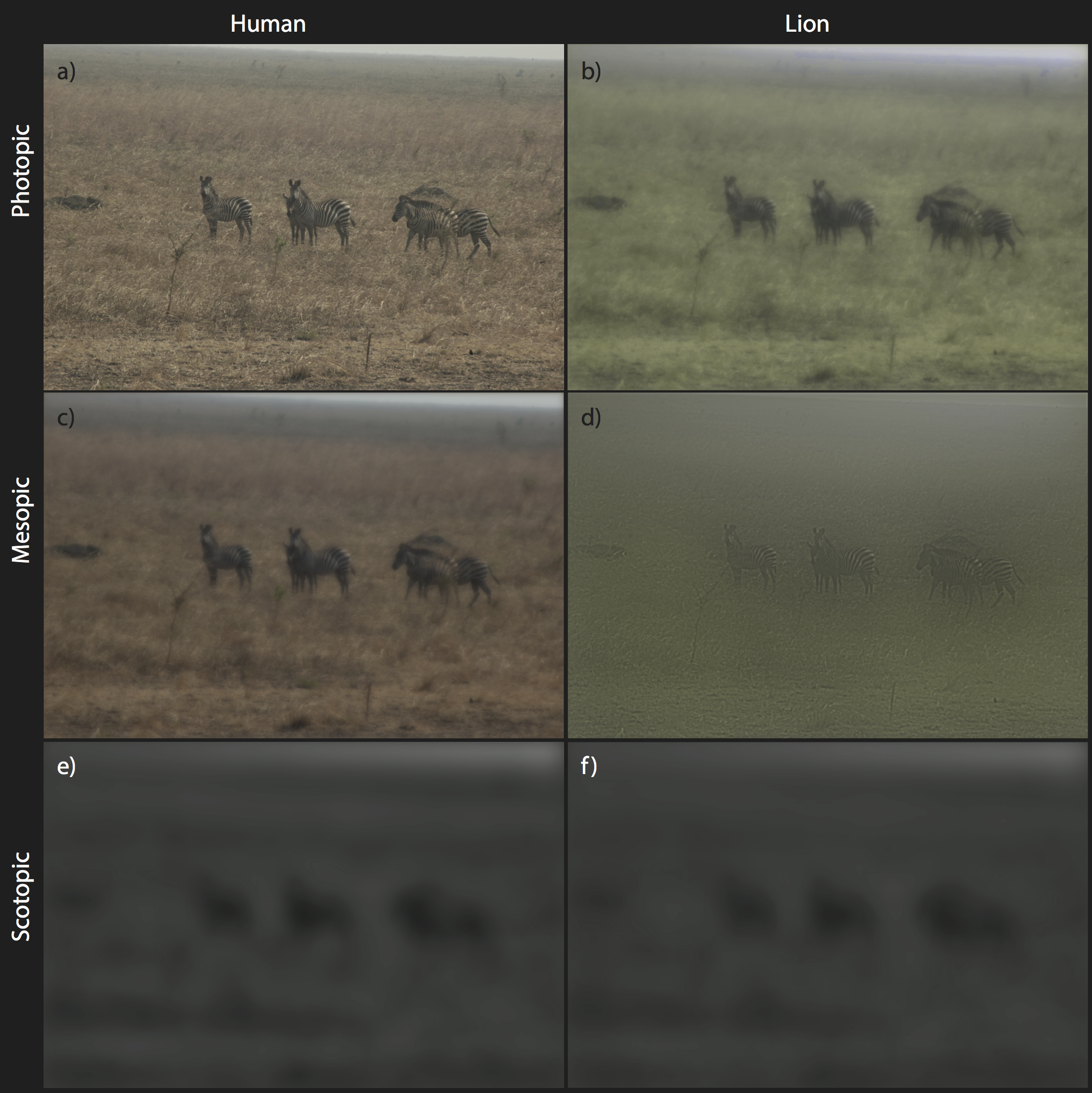 This is from the close distance of 16.4 meters. But even at that distance the stripes are not very visible at twilight (“mesopic”) conditions, while under moonless (“scotopic”) conditions the zebras are just gray blobs, looking much like antelope. As I said, lions attack from distances much greater than this, so zebras at twilight would look like any other prey item. In other words, the stripes don’t appear to camouflage the zebras at distances relevant to protecting them from predators.

It’s still possible, though, that the stripes could confuse a predator once it’s in the midst of a fleeing zebra herd. But I don’t find that particularly plausible, as an attacking lion tends to single out only one individual for attack, while hyenas act as a group when taking down an individual.

The authors did find that stripes did render zebras less conspicuous in woodland, as the vertical stripes tend to hide them amidst the vertical saplings. But this still obtains only at close distances, and, as the authors note, “Thus, stripes cannot help zebras blend in with the background except when a zebra is close to a predator, distances at which predators could likely smell or hear zebras moving or breathing as they are particularly noisy herbivores.” (There’s a hint of special pleading here!)

What about the other hypotheses? Aposematism may still be viable, as once a lion is close to a zebra it might shy away it because of the stripes signalling “don’t mess with me.” That could be tested by dyeing zebras in the wild, but I don’t find that theory very plausible.

The “social recognition” hypothesis for stripes is still viable. The authors try to dismiss it, though, by saying this:

We therefore cannot reject the hypothesis that stripes may assist recognition of conspecifics or individuals, although stripes promoting species recognition seem improbable given the limited extent of allopatry in the three species of zebra. Field observations do not support the idea of stripes enhancing allogrooming, social bonding, individual recognition or being an indicator of phenotypic quality or health. Nor is striping related to crude categories of social organization, namely harem defense polygyny or to resource defense across equids where social requirements might differ. Finally, domestic horses are capable of sophisticated individual recognition using visual cues in the absence of stripes and so it seems somewhat implausible that their close relative, the zebra, needs stripes to do this.

Well, “species recognition” is not a particularly viable hypothesis anyway, and I’ll accept the authors’ notes (there’s a reference given) that stripes don’t enhance individual recognition or other forms of bonding. But stripes still could help zebras find their herds more easily, and there are of course many advantages to finding your herd and rejoining it if you wander off. And the fact that horses can find their herds even though they’re not striped is irrelevant: the question is whether zebras’ stripes give them an enhanced ability to stay with their herd. We simply don’t know the answer to that.

In the next post, later this week (assuming people read this post), I’ll highlight a two-year-old paper by Tim Caro’s group that claims to give the correct adaptive explanation for stripes. Yes, folks, it’s protection from biting flies. I’m not 100% convinced by that paper, but it’s a more plausible explanation than camouflage, and there are relevant data. But more on that later.
h/t: Grania
________
Delin, A. D., D. W. Kline, C. Hiramatsu, and T. Caro. 2015. Zebra stripes through the eyes of their predators, zebras, and humans. PLoS ONE: doi: 10.1371/journal.pone.0145679

78 thoughts on “Why zebras have stripes (hint: it’s not for camouflage)”