Though I’m in far-off Hong Kong, I just got the news that my city’s beloved Cubbies finally won a World Series—after a 108-year drought. And it was a squeaker, too, with a rain delay and a 6-6 tie that sent the game into the 10th inning. And then the Cubs did it—they came back to win 8-7 over the Cleveland Indians, and in Cleveland. The last time this happened was when Theodore Roosevelt was in the White House.

What’s even more amazing is that the gutsy Cubs were down 3-1 in the Series, and Cleveland had to win only one game out of the next three to take the title. They failed.

I’m glad I’ll miss the election (I’ve already voted), but I wish I could be in Chicago now to see the jubilation that’s been waiting for over a century.

Here’s the Chicago Tribune online headline (click to go to the story): 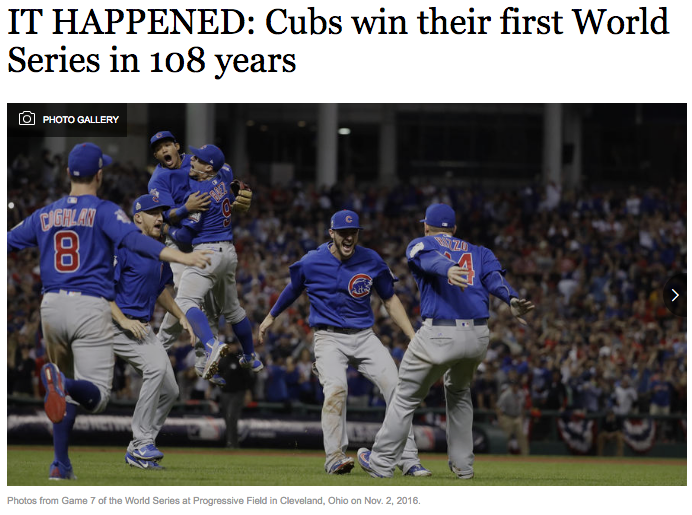 Here are the last inning’s highlights, with the moment of victory taking place at 3:40 when Martinez was thrown out at first. (The broadcast is in Spanish, but who cares?)

There’s going to be one hell of a celebration when the Cubs return to Chicago!