PuffHo’s frenetic demonization of Donald Trump (who’s already demonized himself out of contention for the Presidency) is growing—to the point of lunacy. Look, for instance, at the Entertainment section, where virtually every article is not about entertainment, but about how some entertainer has produced the “perfect” takedown of The Donald. Even “Weird News,” which used to have great nuggets of bizarreness, has jumped the shark, as witnessed by the article on “Grabby Donald” below (click on it, if you must, to see the piece) 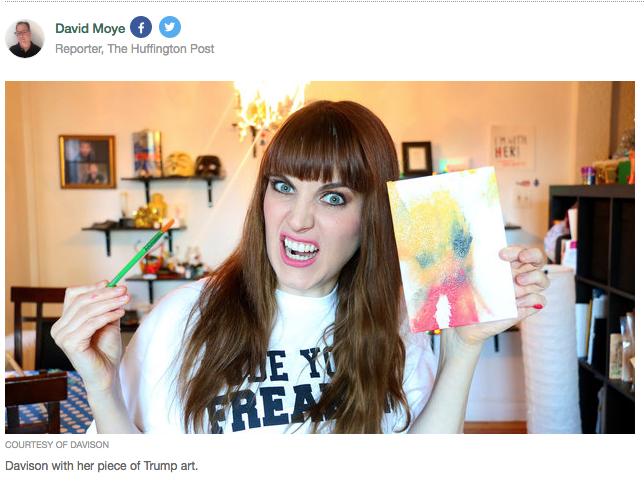 But enough, as I’m trying to get PuffHo off my lawn. I call your attention instead to a recent piece by Glenn Greenwald, known to us as the mendacious and oliagenous atheist-hater and osculator of Islam, published at The Intercept. Called “The unrelenting pundit-led effort to delegitimize all negative reporting about Hillary Clinton,” the piece actually seems reasonable to me. Let us always remember that even those journalists whom we dislike, or whose ideology we reject, can sometimes produce something good. This may be one of them, but I invite readers to weigh in.

Greenwald is no fan of Trump, and clearly thinks Hillary is the far superior choice for President. I agree. But he also thinks, and I also agree, that the liberal media has gone overboard in trying to dismiss all criticism of Clinton, either out of some misguided form of Democrat worship, or—as we’ve I’ve seen from some readers—out of fear that criticizing Clinton could cause her to fall in the polls. (I hope you realize that the latter is no longer an issue.) He especially excoriates Paul Krugman for an unrelenting defense of Hillary (I’ve noticed that too, and wonder if Krugman isn’t angling for some Cabinet or government position), and takes the liberal media to task for the same behavior. I’ll give a few excerpts.

That American journalists have dispensed with muted tones and fake neutrality when reporting on Trump is a positive development. He and his rhetoric pose genuine threats, and the U.S. media would be irresponsible if it failed to make that clear. But aggressive investigative journalism against Trump is not enough for Democratic partisans whose voice is dominant in U.S. media discourse. They also want a cessation of any news coverage that reflects negatively on Hillary Clinton. Most, of course, won’t say this explicitly (though some do), but — as the wildly adored Krugman column from [Sept. 5] reflects — they will just reflexively dismiss any such coverage as illegitimate and invalid.

. . . . it would be journalistic malpractice of the highest order if the billions of dollars received by the Clintons — both personally and though their various entities — were not rigorously scrutinized and exposed in detail by reporters. That’s exactly what they ought to be doing. The fact that quid pro quos cannot be definitively proven does not remotely negate the urgency of this journalism. That’s because quid pro quos by their nature elude such proof (can anyone prove that Republicans steadfastly support Israel and low taxes because of the millions they get from Sheldon Adelson and the Koch brothers, or that the Florida attorney general decided not to prosecute Trump because his foundation and his daughter donated to her?). Beyond quid quo pros, the Clintons’ constant, pioneering merger of massive private wealth and political power and influence is itself highly problematic. Nobody forced them to take millions of dollars from the Saudis and Goldman Sachs tycoons and corporations with vested interests in the State Department; having chosen to do so with great personal benefit, they are now confronting the consequences in how the public views such behavior.

That Donald Trump is an uber-nationalist, bigotry-exploiting demagogue and unstable extremist does not remotely entitle Hillary Clinton to waltz into the Oval Office free of aggressive journalistic scrutiny. Nor does Trump’s extremism constitute a defense to anything that she’s done. It is absolutely true that Trump has at least as many troublesome financial transactions and entangling relationships as the Clintons do: These donations to the Florida attorney general are among the most corrupt-appearing transactions yet documented. Even worse, Trump has shielded himself from much needed scrutiny by inexcusably refusing to release his tax returns, while much of the reporting about the Clintons is possible only because they have released theirs. All of that is important and should be highlighted.

But none of it suggests that anything other than a bright journalistic light is appropriate for examining the Clintons’ conduct. . .

. . . The reality is that large, pro-Clinton liberal media platforms — such as Vox, and the Huffington Post, and prime-time MSNBC programs, and the columnists and editorialists of the New York Times and the Washington Post, and most major New York-based weekly magazines — have been openly campaigning for Hillary Clinton. I don’t personally see anything wrong with that — I’m glad when journalists shed their faux objectivity; I believe the danger of Trump’s candidacy warrants that; and I hope this candor continues past the November election — but the everyone-is-against-us self-pity from Clinton partisans is just a joke. They are the dominant voices in elite media discourse, and it’s a big reason why Clinton is highly likely to win.

That’s all the more reason why journalists should be subjecting Clinton’s financial relationships, associations, and secret communications to as much scrutiny as Donald Trump’s. That certainly does not mean that journalists should treat their various sins and transgressions as equivalent: Nothing in the campaign compares to Trump’s deport-11-million-people or ban-all-Muslim policies, or his attacks on a judge for his Mexican ethnicity, etc. But this emerging narrative that Clinton should not only enjoy the support of a virtually united elite class but also a scrutiny-free march into the White House is itself quite dangerous. Clinton partisans in the media — including those who regard themselves as journalists — will continue to reflexively attack all reporting that reflects negatively on her, but that reporting should nonetheless continue with unrestrained aggression.

Even on this site, I’ve had liberal readers tell me that I shouldn’t question the Clinton Foundation’s questionable contributors because “you can’t prove anything.” But as Greenwald says, “the fact that quid pro quos cannot be definitively proven does not remotely negate the urgency of this journalism.” And that’s precisely why ethical politicians avoid the appearance of a conflict of interest.

At any rate, if you read the piece you’ll see that by no means is Greenwald a flack for Trump. He despises the man. But I don’t think it’s kosher to withhold criticism from Clinton at this point because it might lead to Trump’s election. In fact, given what’s happening in the polls, I can’t see anything that could help Trump. The idea that now is not a good time to criticize Clinton, and that we should wait until after the election, strikes me as a way to permanently maim one’s moral antennae. After all, she’ll be the next President of the U.S.

But read Greenwald’s article and let me know what you think.

110 thoughts on “PuffHo’s demonization of Trump: can it get any more extreme? (And Glenn Greenwald on the canonization of Clinton)”