As a biologist, I’ve learned that there are two related issues that are taboo for academics to discuss openly. The first is the issue of “races”—or genetic differences between human populations. Cultural anthropologists tell us that races are “social constructs.” Well, there’s a bit of truth in that, insofar as there is no finite number of races that can be unambiguously demarcated from each other. But there are genetic differences between groups, and clustering algorithms can divide populations into five or six fairly distinguishable groups corresponding to their geographic localities. Those differences in marker genes undoubtedly evolved via either genetic drift or natural selection in early human populations that were geographically isolated.

But the issue of whether there are genetically-based differences in behavior, physiology, mentation, and other non-physical attributes of populations is simply off the table. It’s not just that we shouldn’t investigate them (for one can make a case that such research might itself have invidious social consequences), but that those differences don’t exist. I’ve even heard people called “racists” by cultural anthropologists—one of the worst fields for ideologically motivated scholarship— simply for suggesting that there might be behavioral genetic differences between human groups. You can discuss the issue, but there’s only one position considered acceptable.

My own take is that the separation of human subgroups has been so recent that there hasn’t been a lot of time for extensive genetic differences to evolve, though clearly there’s been time for marked physical differences to evolve. And it’s clear that human intermixing, facilitated by transportation and increased mobility, will tend to efface all of these differences. But we shouldn’t assert that any trait beyond the most obvious physical differences between groups shows complete equality among them.

When it comes to the sexes, though, it’s a different matter. In the hominin lineage males and females have been coevolving (either cooperatively or antagonistically) for 6 million years or so—ample time for differences in behavior, wants, thought patterns, and so on to evolve, just as morphological differences between men and women have clearly evolved. Do those genetic differences in thought and behavior exist? I suspect they do, at least for traits connected to sexuality and sexual behavior. Just as animals ranging from flies to mammals show consistent (though not universal) patterns of male/female differences in sexual behavior—differences explainable by sexual selection—so I expect the human lineage evolved similar patterns. After all, males are larger and stronger than females, and you have to explain that somehow. How do you do so without explaining evolved differences in behavior—probably based on sexual selection?

Yet the idea that males and females show evolutionary/genetic differences in behavior is also anathema in liberal academia, and for the same reason that population differences are anathema. Such differences, so the thinking goes, would support either racism (on the part of populations) or sexism (on the part of males and females). But of course that thinking is false: we can accept evolved differences without turning them into social policy. And it’s of interest to many evolutionists, including me, to know the extent to which groups and sexes have evolved along divergent pathways.

Still, many feminists, liberals, sociologists, and cultural anthropologists deny any such divergence. Yes, men and women differ in body size, strength, and structure, but there are, so they say, no such differences in the brain and behavior. In all other traits, so the trope goes, men and women are equal.  And given equal interests and talents, then the only thing enforcing anything other than a 50% representation of men and women in professions must be cultural pressures: viz., sexism. Thus, unequal representation in professions is prima facie evidence of sex discrimination. But as Jon Haidt mentioned in the lecture I posted the other day (watch the video; it’s good!), one first has to determine the cause of such unequal representation before one decides what to do about it.

At any rate, in the humanities and especially cultural anthropology, which in its ideological slant really counts as (sloppy) humanities rather than science, these attitudes are not only religious in nature, lacking empirical substantiation, but are also theological in enforcement. Authors (as I’ve pointed out recently) assume what they want to prove, and then go ahead and collect just those data that support their hypothesis. Confirmation bias is rife. This is what theologians do, not scientists.

The paper I’m highlighting today (link and free download below) is by Charlotta Stern, associate professor and deputy chair of the sociology department at Stockholm University. She is a brave woman, for her paper aims at calling out those sociologists who simply refuse to consider biology as an explanation of sex-distinguishing behaviors. As she says, not pulling her punches:

The present investigation is informed by my long and ongoing experience as a sociologist at Stockholm University. My teaching and research often touch on gender issues. I have served on about five thesis committees that addressed gender sociology or related matters, and I have participated in dozens of seminars that touch on gender sociology. My relationships with my colleagues and students are not heated. When I raise ideas that would challenge the sacred beliefs, I do so only at the edges. I have seen how people react when I or another suggests that maybe there is a difference in math skills between men and women, or that men and women have different preferences and motivations. In my experience, gender sociologists frown upon such remarks about innate differences in aptitude or motivations. I perceive deep and widespread taboo and insularity among gender sociologists. It saddens me. I feel impelled to make available some expression of my concern, hoping that students and others will hear it before sinking into the sacred beliefs and sacred causes addressed here.

Her method was simple, and somewhat subjective. She examined a set of 23 highly-cited articles in sociology journals, all of which cite a classic paper in the field, “Doing gender,” by Candace West and Don Zimmerman (1987); reference and free link below).

West and Zimmer concluded (or decided in advance) that behavioral and non-physical differences between men and women were “constructed” based on their genitalia, so that all differences we observe in later life are the result of socialization. As Stern notes,

“Doing gender” is presented as part of a lamentable system of social control. The paper’s final para- graph reads:

“Gender is a powerful ideological device, which produces, reproduces, and legitimates the choices and limits that are predicated on sex category. An understanding of how gender is produced in social situations will afford clarification of the interactional scaffolding of social structure and the social control processes that sustain it. (West and Zimmerman 1987, 147).”

Stern examined 23 highly-cited sociology papers published between 2004 and 2014 (two per year) that themselves cited West and Zimmer’s influential paper. Then, developing a spreadsheet, she coded each of the articles as whether or not they took the hypothesis of biological differences between men and women as a serious possibility. Her classification was as follows:

Here is Stern’s list of the articles and their ratings: 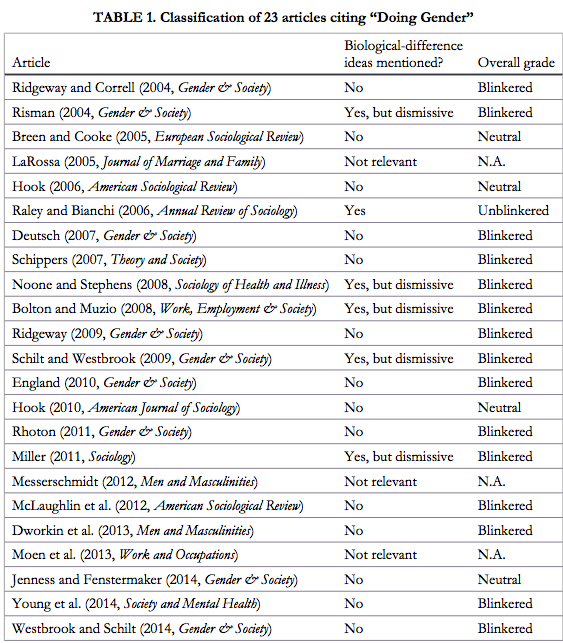 Now of course you can debate Stern’s methods and assessments, but what’s clear even without this analysis is that it’s taboo in much of academia to suggest that measurable differences between populations or sexes (excluding the most obvious physical differences) have any biological basis. But there should be no taboos in academics. One can debate the wisdom of investigating some questions (e.g., “Are Jews genetically acquisitive?”), but what one should not do is assume what’s true before investigating it. And, as Jon Haidt noted, if you don’t know the empirical basis for differences that are considered problematic (such as the underrepresentation of women in mathematics), you’re hampered from addressing them.

One cannot draw quantitative estimates on the basis of my investigation, but its findings are consistent with an image of gender sociology as a subfield that has insulated its sacred beliefs from important scientific challenges.

I have extensive first-hand experience with gender sociology’s insularity. But I also know of pervasive preference falsification (Kuran 1995), and I have seen students awaken with an ‘a-ha!’ moment when exposed to unorthodox thinkers such as Catherine Hakim (1995; 2000; 2008). I believe reform is possible. Whether people should ‘do gender’ less, and how they should ‘do gender,’ are questions worthy of personal reflection, scholarly exploration, and public discourse. More definite, to my mind, is that people should do less insularity.