I’m always surprised at how much rancor is directed toward “mythicists”—those who deny that there was a real Jesus who, whether or not he was divine, was the nucleus around which Christianity accreted. I’m also surprised at how certain many biblical scholars are that Jesus existed (Bart Ehrman, to give a prominent example).

Yet although I am the first to admit that I have no formal training in Jesusology, I think I’ve read enough to know that there is no credible extra-Biblical evidence for Jesus’s existence, and that arguments can be made that Jesus was a purely mythological figure, perhaps derived from earlier such figures, who gradually attained “facthood.” As a scientist, I’ll say that I don’t regard the evidence that Jesus was a real person as particularly strong—certainly not strong enough to draw nearly all biblical scholars to that view. It’s almost as if adopting mythicism brands you as an overly strident atheist, one lacking “respect” for religion. There’s an onus against mythicism that can’t be explained by the strength of evidence against that view.

Probably nobody reading this post thinks that Jesus was the miracle-working son of God, and that pretty much disposes of his importance for Christianity. In the end, I’m most surprised at how much rancor is involved in these arguments, especially by the pro-Jesus side, even when that side readily admits that Jesus was not the son of God. (I can understand, of course, why Christians want to argue that Jesus was a real person.)

Regardless of your take on this question, I recommend you read Brian Bethune’s piece in the March 23 MacLean’s: “Did Jesus really exist?” (Subtitle: “Memory research has cast doubt on the few things we knew about Jesus, raising an even bigger question.”)

The gist of  Bethune’s piece is a description and critique of Bart Ehrman’s new book: Jesus Before the Gospels: How the Earliest Christians Remembered, Changed, and Invented Their Stories of the Savior. And what that book shows (see the brief interview with Ehrman on the Amazon link above) is that recent work on fallible human memory shows that even in a short time so-called “eyewitness accounts”—these constitute the bulk of the oral Biblical evidence for Jesus—can be corrupted beyond recognition. What that further means is that over the four or five decades spanning the reported date of Jesus’s death and the first written scriptural account of his deeds (the Gospel of Mark) the Story of Jesus could involve not just severe distortion, but even fabrication. That is, Jesus could be the subject of False Memory Syndrome. As Bethune notes, though, this puts a skunk in Ehrman’s historical woodpile:

Small wonder then that Ehrman sees the Gospels as rife with “distorted” (that is, false) memories. What is surprising, though, is how much of the Gospels he still thinks he can accept as reasonably accurate “gist” memories, how lightly he applies his new criterion, which he primarily uses as justification for rejecting Gospel stories he long ago dismissed on other historical grounds. Ehrman’s memory book, in effect, is more an appeal to the faithful to accept historians’ approach than a new way of evaluating evidence. His list of what historians, including himself, think they can attest to hardly differs from a list he would have made a decade ago: Jesus was a Jew, an apocalyptic preacher like the man who baptized him, John the Baptist; his teaching, rooted in Torah, was delivered in parables and aphorisms; Jesus had followers who claimed his message was validated by the miracles he wrought; in the last week of his life, Jesus went to Jerusalem, where he caused a disturbance in the Temple that, some hours later, led to his arrest; Pontius Pilate, the Roman governor found him guilty of sedition and had him crucified.

. . . However appealing and reasonable such a list is to modern skeptics, it is still drawn almost entirely from within the faith tradition, with buttressing by the slimmest of outside supports—brief references from Roman observers.

Bethune then argues that the one “solid” fact buttressing Jesus’s existence—his execution under Pontius Pilate, a historical figure—is likely based on post-Biblical fabrication, since many early Christians didn’t accept Pilate as executioner or even that Jesus died around the time of his reign. As Bethune notes, “Snap that slender reed and the scaffolding that supports the Jesus of history—the man who preached the Sermon on the Mount and is an inspiration to millions who do not accept the divine Christ—is wobbling badly.”

Finally, Bethune argues, and I agree from what I know, that even the evidence in scripture for Jesus’s reality is dubious, since the earliest source, the letters of Paul, give us no picture of Jesus as a flesh-and-blood person:

That the Gospels provide only debatable evidence for historians has long obscured the fact that the bulk of the New Testament, its epistles, provide none at all. The seven genuine letters of St. Paul, older than the oldest Gospel and written by the single most important missionary in Christian history, add up to about 20,000 words. The letters mention Jesus, by name or title, over 300 times, but none of them say anything about his life; nothing about his ministry, his trial, his miracles, his sufferings. Paul never uses an example from Jesus’s sayings or deeds to illustrate a point or add gravitas to his advice—and the epistles are all about how to establish, govern and adjudicate disputes within Christianity’s nascent churches.

Bethune draws heavily from the work of Richard Carrier, a prominent mythicist. I’ve read quite a bit of that and find it heavy weather, but in the end agree with Carrier that mythicism appears to be rejected by Biblical scholars for mere psychological reasons. Christianity is a bedrock of Western society, so even if we doubt the divinity of Jesus, can’t we just make everyone happy by agreeing that the New Testament is based on a real person? What do we have to lose?

But I’m not willing to do that—not until there’s harder evidence. And I’m still puzzled why Bart Ehrman, who goes even farther in demolishing the mythology of Jesus in his new book, remains obdurate about the fact that such a man existed. Remember that eleven historical Americans signed statements at the beginning of the Book of Mormon testifying that they either saw the Angel Moroni point out the golden plates that became the Book, or saw the plates themselves. Yet nearly all of us reject that signed, dated, eyewitness testimony as total fabrication. Why are we so unwilling to take a similar stand about Jesus? 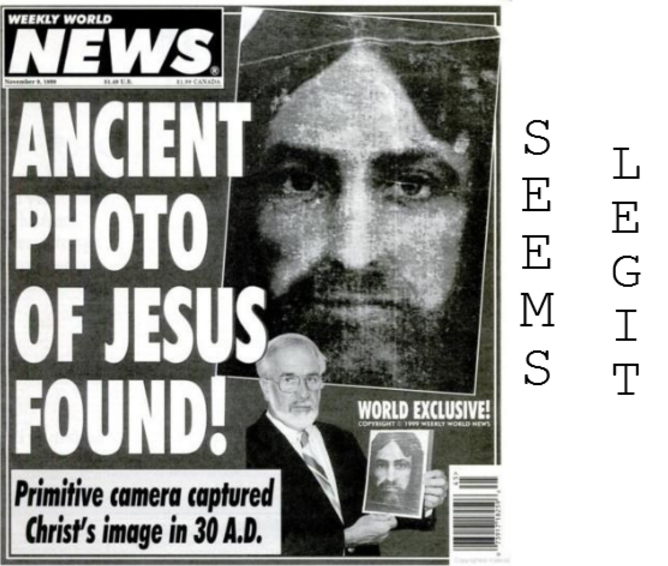