First the “politically correct” censorship of costumes, Halloween or otherwise, spread throughout U.S. colleges; then it leaped the Atlantic to England, where many universities are unbearably censorious. Now, however, it’s spread to Scotland, a land of what I thought were sensible and level-headed folk. If you go to yesterday’s Scotsman, you’ll find this story (click on the screenshot below to get to it): 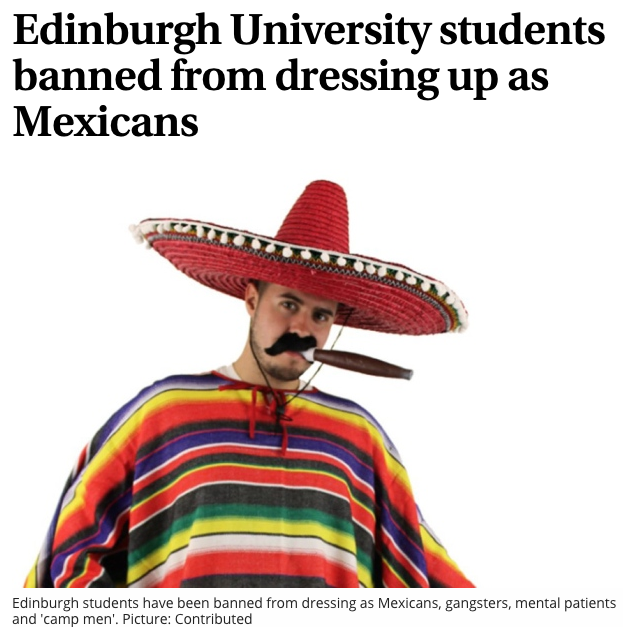 What, exactly, is banned? According to the article, “offensive fancy dress costumes” as well as “Mexicans, gangsters, mental patients and ‘camp men’”. Now I don’t know what “camp men” are, but rather than look it up I’ll ask readers to enlighten me. And, as usual, the ban is imposed not by the University, but by its student union:

The Edinburgh University Students’ Association (EUSA) has previously been criticised for excessive political correctness, introduced the rules following a series of scandals involving students “blacking up”.

Students have been told: “You may not intend to hurt anyone when picking out your costume, and you may not even think there’s a problem, but it’s important to consider the impact your choices will have.

“It is also not acceptable to use props to emphasise racial characteristics in order to convey an individual or character. A good costume should be clear enough that you do not need racial or cultural additions.”

Well, of course I think it’s terribly offensive to don blackface, given the history of how that was used (though I still wouldn’t ban it), but “cultural additions”? What’s wrong with looking like Mexicans that’s not wrong with looking like geishas or samurai? And even if it’s done to satirize a culture (something I again deplore), it’s still free speech. Who decides which costumes are offensive and which are not? Will Edinburgh Uni have a student Costume Police?

Apparently this isn’t the first time Scottish universities have imposed bans on websites, newspapers, and even songs:

Edinburgh was recently ranked as one of the most “ban happy” universities in Spiked magazine’s, Free Speech University Rankings 2016.

Tom Slater, the coordinator of the rankings, said: “The university that produced David Hume is banning fancy dress.

“Edinburgh was among the worst universities we assessed nationwide. The Edinburgh Union Students’ Association, in particular, has outdone itself.”

He added: “Our research shows that in Scotland – as it is across the country – campus censorship is hitting epidemic proportions.”

Previous bans made by EUSA have included social media site UniLad, Page 3 and Robin Thicke’s hit, Blurred Lines from being played on campus.

. . . Dundee University has also faced criticism after banning Pro-life groups in 2014 – despite them having their own stall on campus for years before.

And Stirling University introduced a policy to not “share a platform with any organisation deemed to be racist or or fascist by the National Union of Students.”

And yet, as happens so often, the Edinburgh student union argues that it’s actually promoting free speech!:

EUSA President, Jonny Ross Tatam, said their policies are intended “to broaden free speech, not restrict it. We’re committed to ensuring everyone feels able to participate in debate and discussion within our venues.”

This is a classic example of Orwellian doublespeak: censorship is really free speech! But how, exactly, is banning costumes going to broaden free speech? The way to do that is to unban those costumes, and then ensure that those who oppose them are able to state their opinions. Words versus words, or words versus costumes—that is the way to go.  If someone wearing a “camp man” costume somehow silences the opponents of such dress, that’s a pretty pathetic situation.

In the end, if these students really want to change the world, they should do so not by silencing their political opponents but by debating them.

Fortunately, most of the comments on the article aren’t on board with censorship. Here are two: 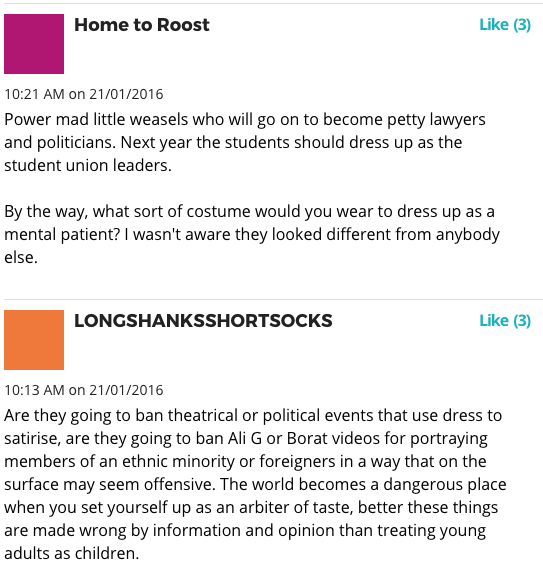