The Torygraph and The Independent report further restriction of free speech (not a “constitutional” guarantee in the UK)—this time at Oxford. And once again, it involves a student union, the OUSU, which has banned a magazine called “No Offence” from the Freshers’ Fair. The grounds? Because the magazine is offensive. From The Independent:

The magazine aims to promote a discussion surrounding ideas people are afraid to discuss, according to the Versa News student website.

The magazine was founded by third-year Philosophy Politics and Economics student Jacob Williams and Oxford local Lulie Tanett and the aim of the magazine is to promote free speech and provoke debate.

They say that ‘No Offence’ was set up to ‘promote debate and publicise ideas people are afraid to express’.

Here’s the email from the Oxford Student Union explaining why they banned the magazine: 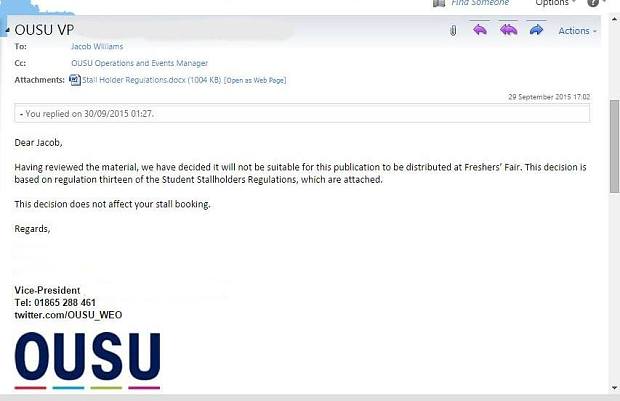 Further clarifying why the Stallholder Regulations were violated,  the OUSU explained to the Torygraph:

”We at OUSU do not wish to have an event which is intended to welcome new students to Oxford associated with a publication making light of racism, sexual violence, and homophobia in an attempt at satire.

“The Freshers’ Fair is one of OUSU’s most widely attended events and while Open Oxford are entitled to book a stall and distribute their publication elsewhere, we chose to withdraw their permission to distribute the publication.

“OUSU exists to represent and enhance the lives of all Oxford students and given that Freshers’ Fair is for new students, we do not wish to subject them to the offensive views of a minority which are present in this publication. Such views are in no way representative of Oxford students as whole.”

The Independent gives more information about the content that led to the banning:

OUSU told The Independent it did not allow the magazine because it “included a graphic description of an abortion, the use of an ableist slur, a celebration of colonialism, and a transphobic article. In an attempt at satire, another article suggested organising a ‘rape swagger’ – in the style of a ‘slut walk’ – in order to make rape ‘socially acceptable.’

“OUSU do not want to be associated with the views in this magazine, therefore do not want it to be distributed at our event. The offensive views exhibited in this magazine do not in any way represent the majority of Oxford students, or OUSU. We therefore are very comfortable with our decision not to allow the publication at our event, and would like to emphasise that the editors of No Offence are, of course, completely free to publish the document online, in the exact form in which it was sent to us, to enable students who wish to read it to do so.”

. . . UEA students’ union (SU) campaigns and democracy officer Chris Jarvis said that the body wants all members to feel safe and accepted by ensuring there is no behaviour, language, or imagery which could be considered racist at all events.

Once again we see the repression of speech that makes students “unsafe” or “unaccepted”.  Now it’s possible that the stuff in the magazine really is odious and offensive (the “rape walk” thing sounds disturbing), but it’s also possible that what we have here is a Charlie Hebo situation, in which the views of the magazine editors are misinterpreted as approving of the “wrong” sides of sensitive issues—issues that do warrant discussion. Regardless, why can’t the OUSU allow a magazine to be distributed that allows “freshers” to make up their own minds?

I remember that when I was younger, a callow and fearless lad of about thirteen, a friend and I visited the American Nazi Party headquarters in Arlington, Virginia, very close to where I lived. We wanted to see what it was all about and meet the infamous Lincoln Rockwell, head of that organization (he was later assassinated). We were given a tour of the facilities by people wearing uniforms and swastika armbands (a huge picture of Hitler adorned the wall), and then presented with a bag of souvenir literature; I remember in particular a pair of “Coon-Ard Boat Tickets to Africa,” expressing the Party’s desire to ship all black people back to that continent (“coon” is an American slur for “black”). I was at once disgusted and fascinated that people could really believe this stuff.

Nowadays I don’t think I’d have the courage to walk into that house (the place no longer exists, as far as I know), but, disgusted as I was, I didn’t and don’t think that this kind of stuff should be banned. After all, it is the speech of Holocaust deniers that have led people like me to learn exactly what evidence there is for the Holocaust, just as it is the speech of creationists (which I find offensive!) that spurred me to write Why Evolution is True laying out the counterevidence. Discussion with those you oppose, so long as you can keep your cool and remain fixed on evidence, can be a valuable learning experience.

The operative quote is from Salman Rushdie:

We need to stop putting college students in insulated bubbles and start treating them as adults. There’s lots of potentially offensive stuff out there in the real world, and college is the place to learn how to deal with it.