Reader Robin Cornwell, who has a black dog (Kali) and two black cats (Artemis and Luna) sent me this story. I have to admit that my caninophobia is lessened by hearing this kind of stuff, at least by the notion that dogs can protect cats but not vice versa (although a cat did rescue a child from a vicious dog). Here’s the tail:

Generally, both my cats Luna and Artemis come in before dark. But on the other night, Luna – the youngest goddess – was determined to do make some night moves.  She slipped through the door into the darkness.  I called to her, but no luck. Kali and I went out a couple of times – but no Luna.

I would wake up during the night and check for her, but she was determined to be outside.  Then, at about 4:30am, Kali, my 9 month old puppy, began to growl.  Then she began to bark and we both ran to the window.  Much to our horror, I heard a coyote yip and could see that he had Luna in his mouth…. Kali went a bit nuts and it caused the coyote to pause, which gave Luna the chance to get away.  The coyote took off after her, Kali and I ran downstairs and outside – but I did not see either the coyote or Luna.  Kali and I walked back and forth to see if we could find her – and I was sure she was a goner.

I didn’t sleep much, and about an hour later I went downstairs to make coffee – and there was Luna, looking very disheveled by the sliding glass door.  I was so happy, and so was Kali… she was levitating off the floor as Luna walked in… I picked her up and checked for damages.  The area around her eye was bruised, but she seemed to be in good shape.

Up until this time, Luna had been standoffish toward Kali – not letting Kali lick or fuss over her (Artemis, who was raised with dogs, was fine being with Kali). But as I held Luna, Kali licked her all over – sniffed her to check if everything was fine – and Luna just lay there.

Luna spent most of her time in the guest room – as cats are wont to do when not feeling great – but all through the evening and the night, Kali would go to check on her.  Now that several days have passed, Luna seems quite fine with Kali’s attention.

Luna doesn’t seem to have any interest in going outside now (for which I am glad) and she is certainly doing fine.  The photo below shows her lying in my PJ drawer – and Kali is licking her head and especially her ears. 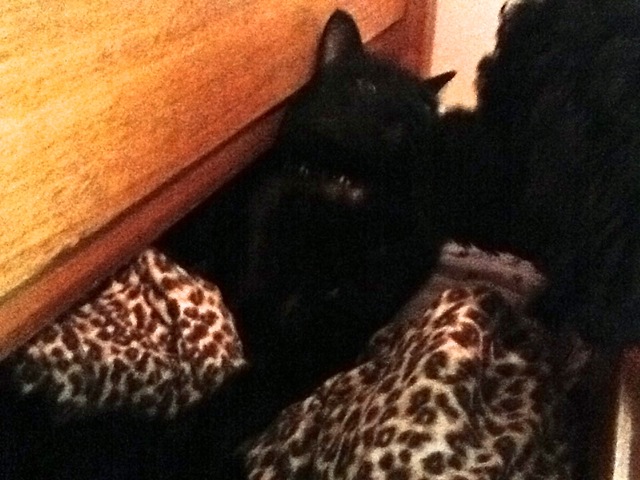 Happy ending for all, well, except perhaps for the coyote. 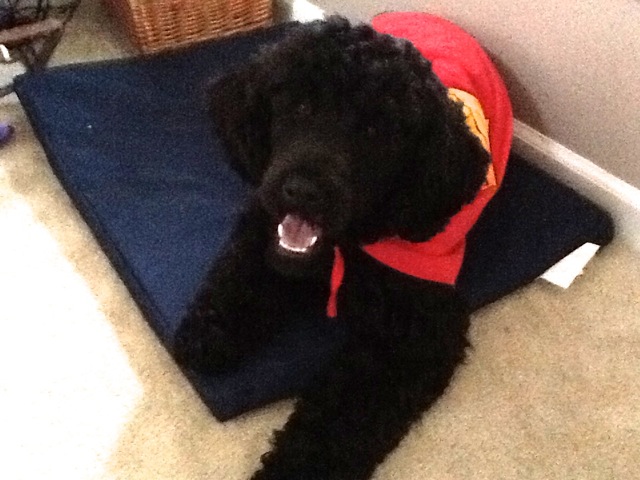