Kelly Houle is the Official Website Artist and Calligrapher™, and we’ve encountered her several times before. She is, for example, engaged in the Illuminated Origin of Species Project, in which she, over at least a decade, will both reproduce Darwin’s Origin in calligraphy and then illuminate it with natural history drawings, just as medieval monks wrote out and illuminated the Bible. (The Origin, of course, is far more worthy of such treatment than fictional books.) You can find more on the Origin project, with the latest updates, on its Facebook page  Kelly also produces miniature books, various drawings of natural history subjects (beetles, birds, and so on), and a whole gamut of work involving watercolors and calligraphy. You can see much of this at her website and Facebook page, and if you like it, you can buy some (it’s remarkably inexpensive for the quality) to support the Origin project. I myself have a bunch of her beetles prints (Darwin, as you remember, was a lover and collector of Coleoptera) and her “I think” phylogeny greeting cards. Finally, Kelly was the illuminator and illustrator of the multiply-autographed edition of WEIT that sold for over $10,300 on eBay, with all proceeds donated to Doctors Without Borders. (Those ingrates never thanked us for the donation!). You can find the artwork to gawk and and to buy at her art-and-book-and-calligraphy webpage. I finally got to meet Kelly last week when she, her husband Ken, Ben Goren, and I journeyed to the home of her parents, Mike and Karen, for a three-day bout of relaxation, local traveling, and noms. Much of this has been documented, and there’s more to come. Before we took off, I visited Kelly at her home in Mesa and was allowed to photograph some of her art and see the way its made. This is Kelly with the two opening pages of the Illuminated Origin: title and frontispiece. These are the final copies (you can see them better here), so you can see how large the entire manuscript will be (each chapter will be separately bound as the book is so large): 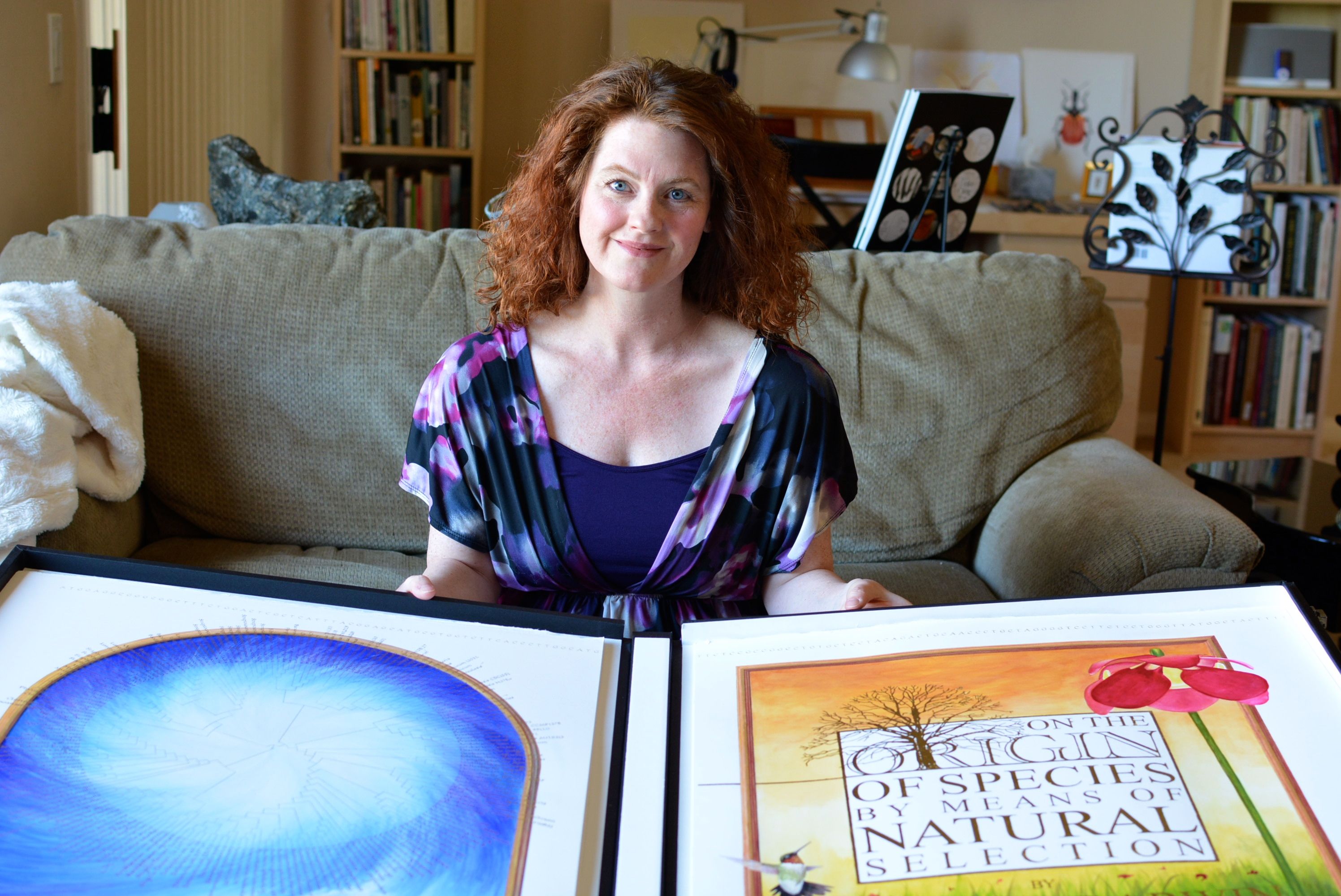 The circular tree of life combined with a drawing of the Beagle, all on a deep blue background with a gold-leaf phylogeny, is one of my favorite of her works (see a better reproduction here): 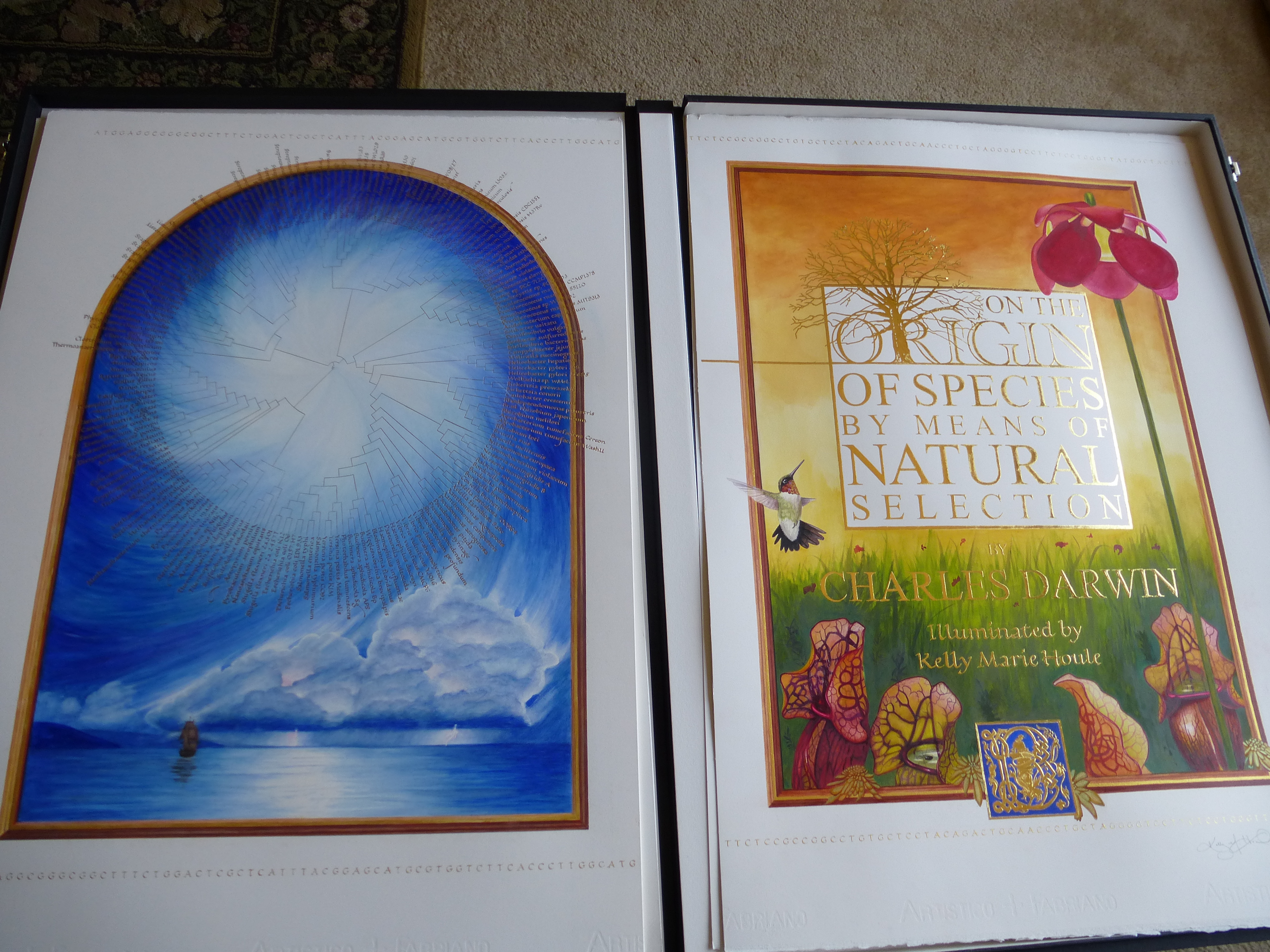 The manuscript will be lettered and illuminated on fancy, thick Italian paper. Here’s one of the earliest pages of the manuscript. It takes several hours to letter each page (all of it laid out in advance), and there is no room for error: if she makes a mistake, she has to do the entire page over. 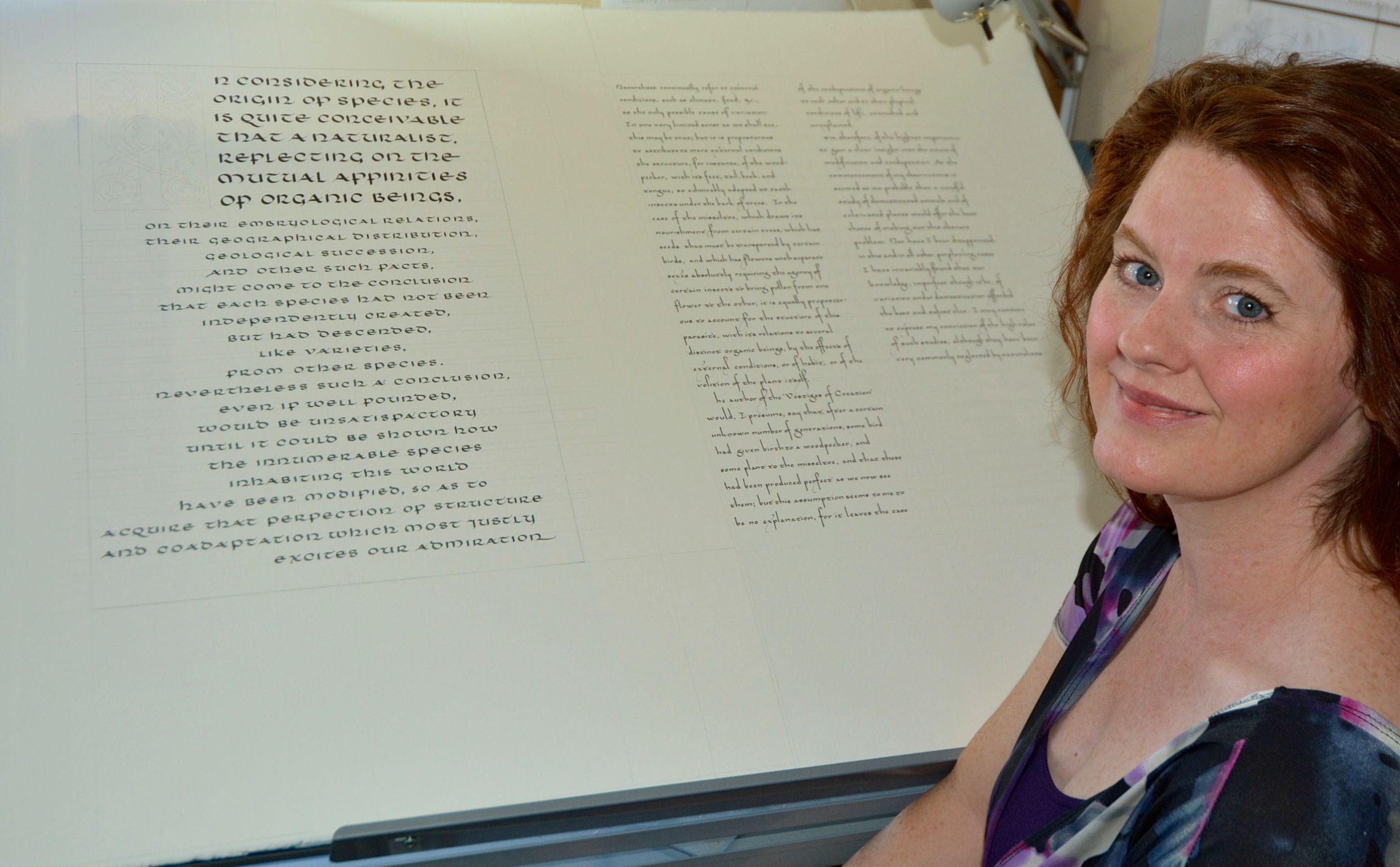 Here is the introduction title page, still in progress. As Kelly reports:

The introduction title page features a life-size Toxodon platensis skull as analyzed by Richard Owen. There are links with info and the source image, a drawing by George Scharf, from Zoology of the Voyage of H.M.S. Beagle, here, here, and here.

From the above AMNH page:

“This particular animal belongs to a group without modern descendants, but many of Darwin’s fossils seemed to be huge variants of the same general kind of animal he had seen roaming the landscape during his explorations. This led him to wonder if the fossils might be evidence of ancestral forms. In later years Darwin would write that the South American fossils were essential to the “origin of all my views.” 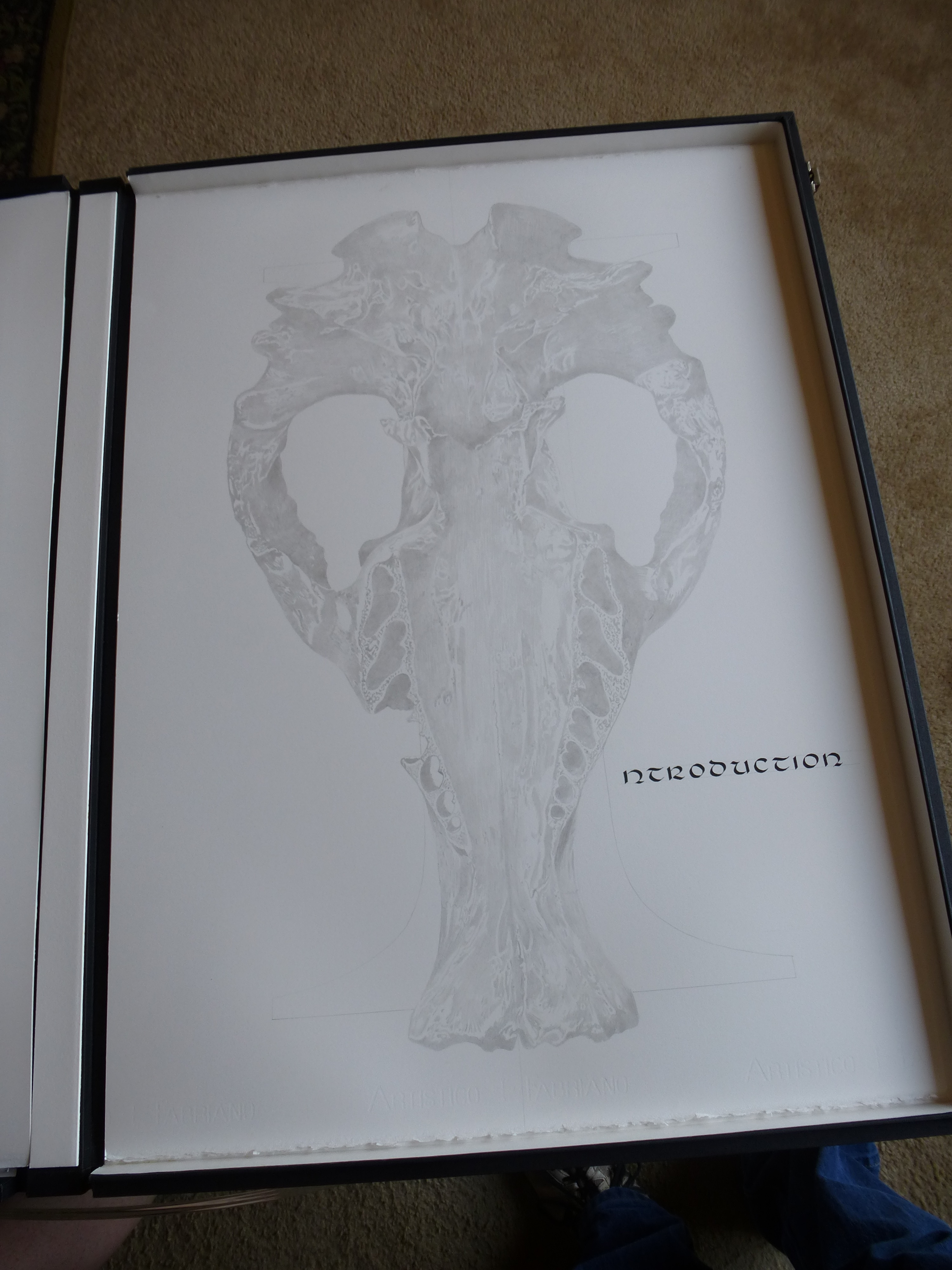 One thing that struck me about her work is the immense amount of preparation that takes place before anything is done on the final Origin, her books, and her paintings. Calligraphy is practiced, paint samples are made and worked out in detail, and each step of a beetle drawing, for instance, is done in a notebook, with all details recorded so that it can be reproduced in the final version. She has three workstations; this is the one for preparing The Origin: 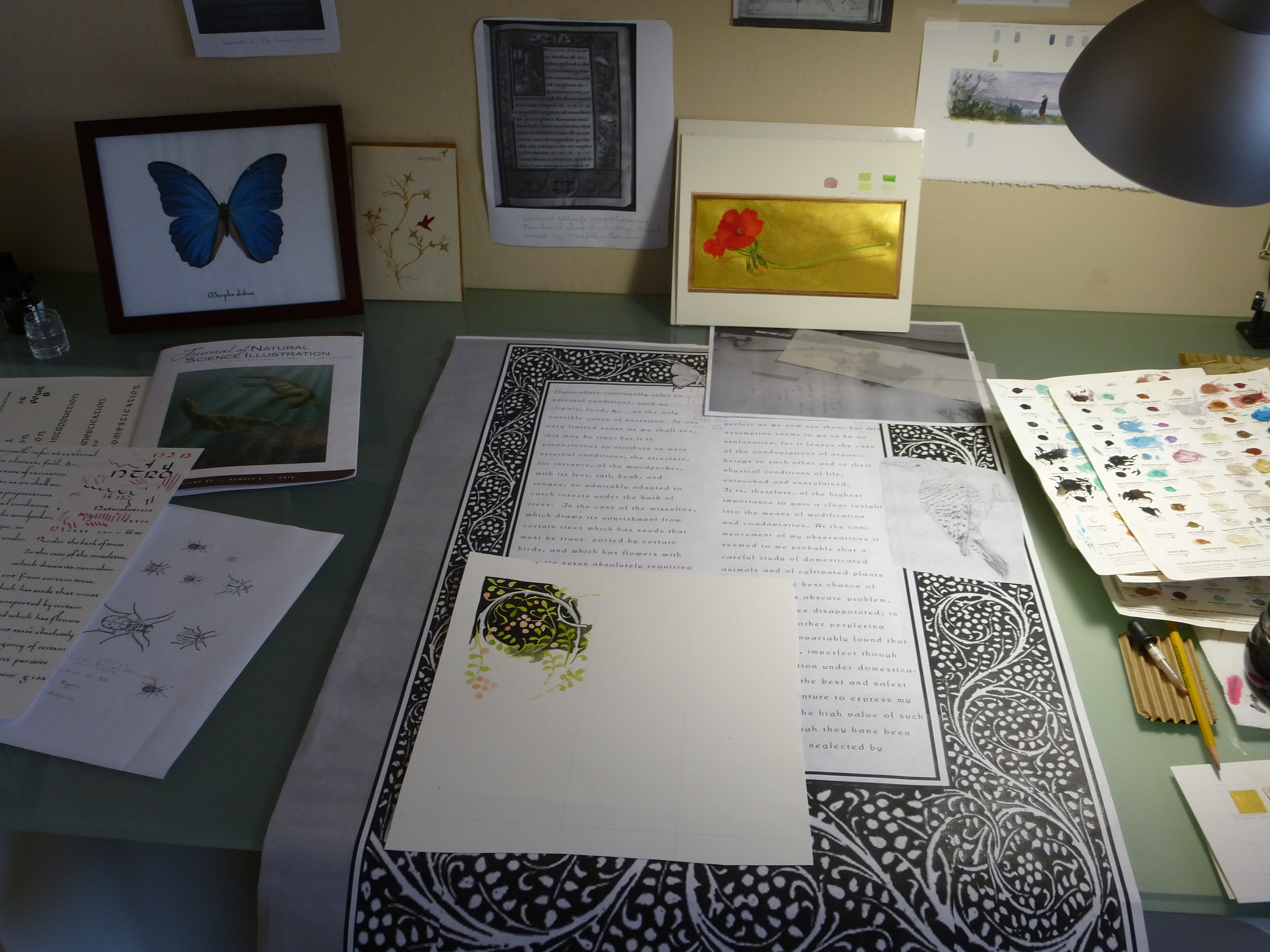 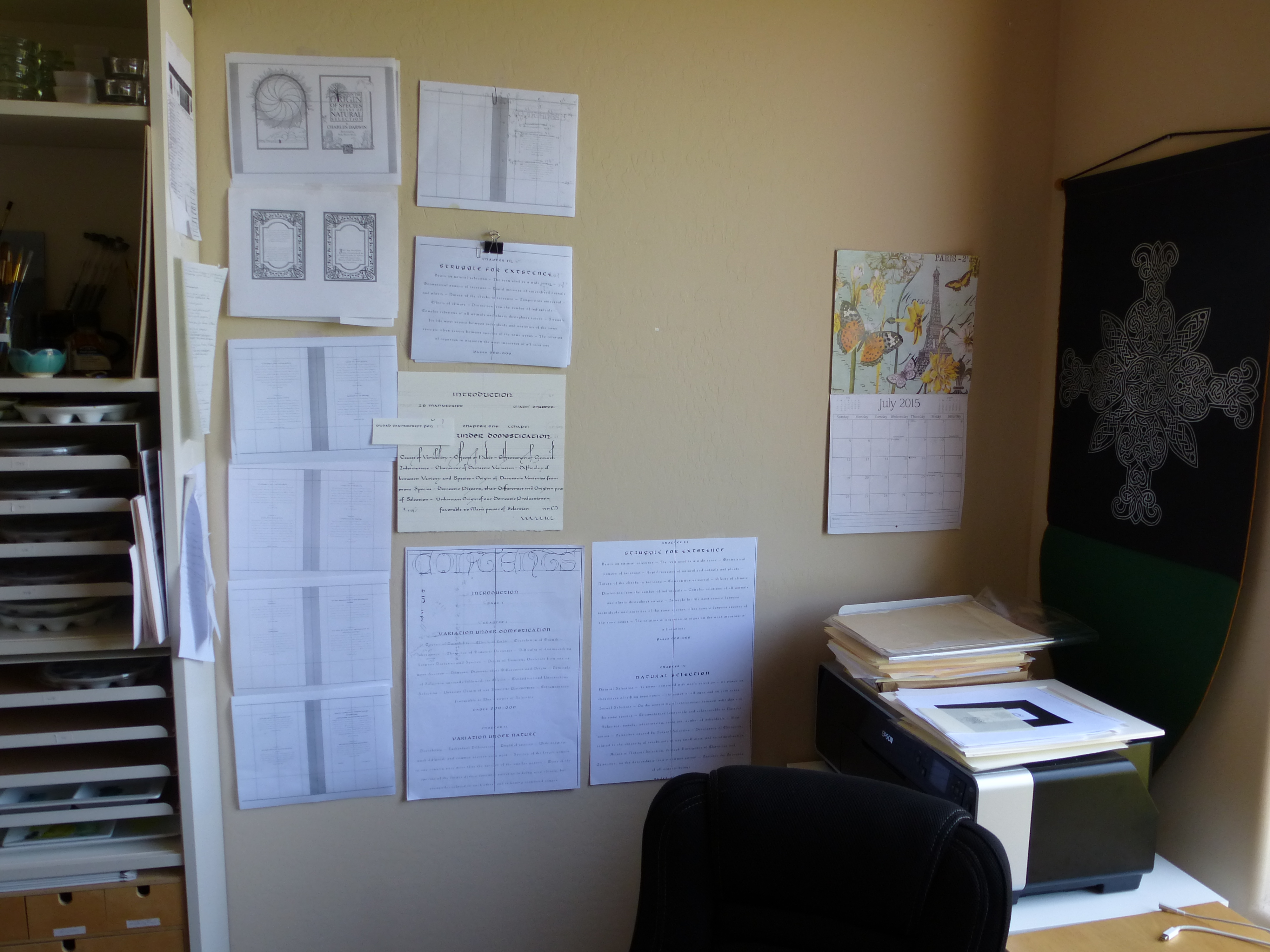 Color swatches are consulted (and palettes made) so that colors can be exactly reproduced after she makes samples. Here are swatches from the manufacturer: 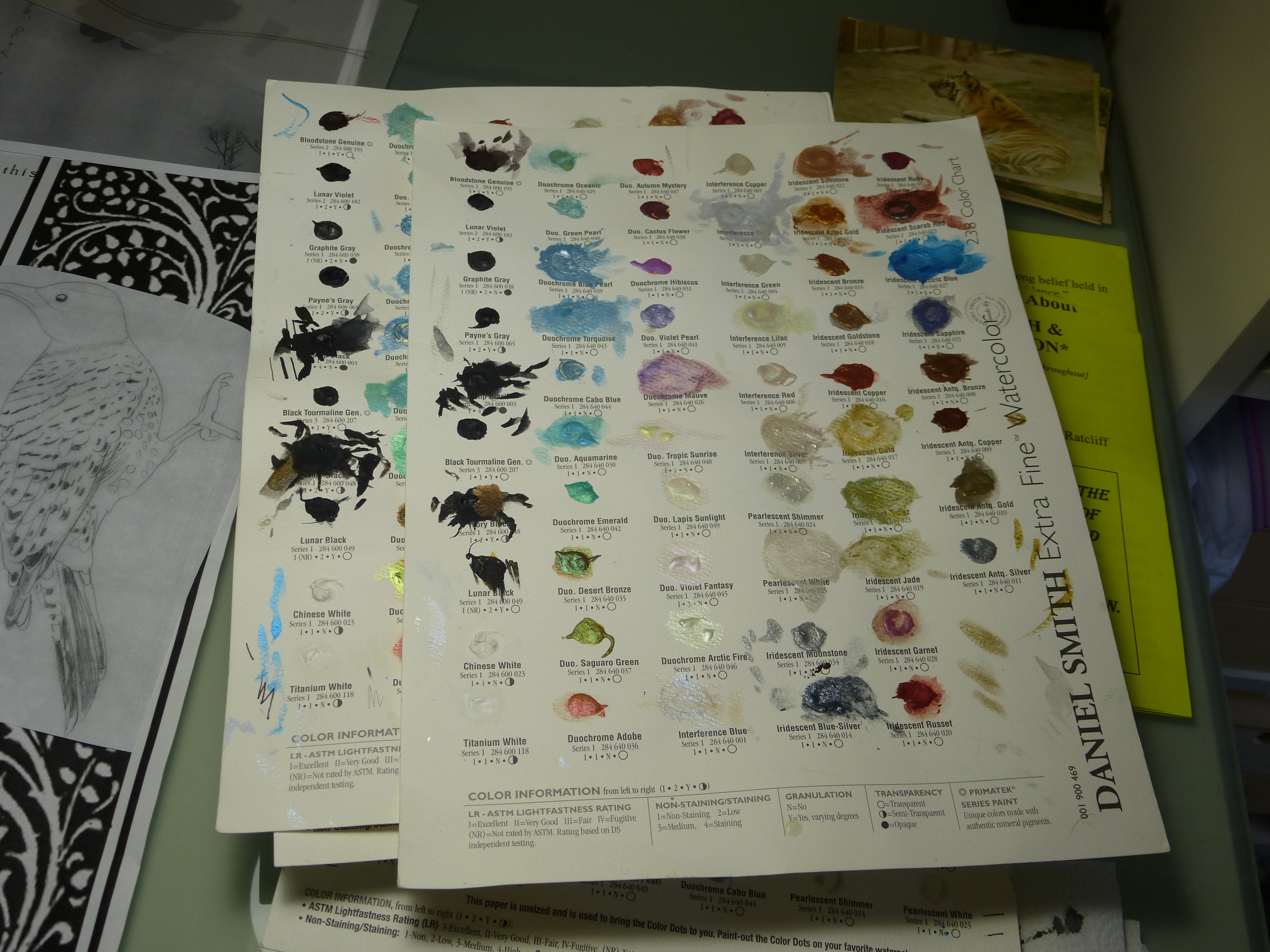 Only a small part of her equipment. Below are plastic palettes with premixed, dried watercolors so that a particular color can be used several times: 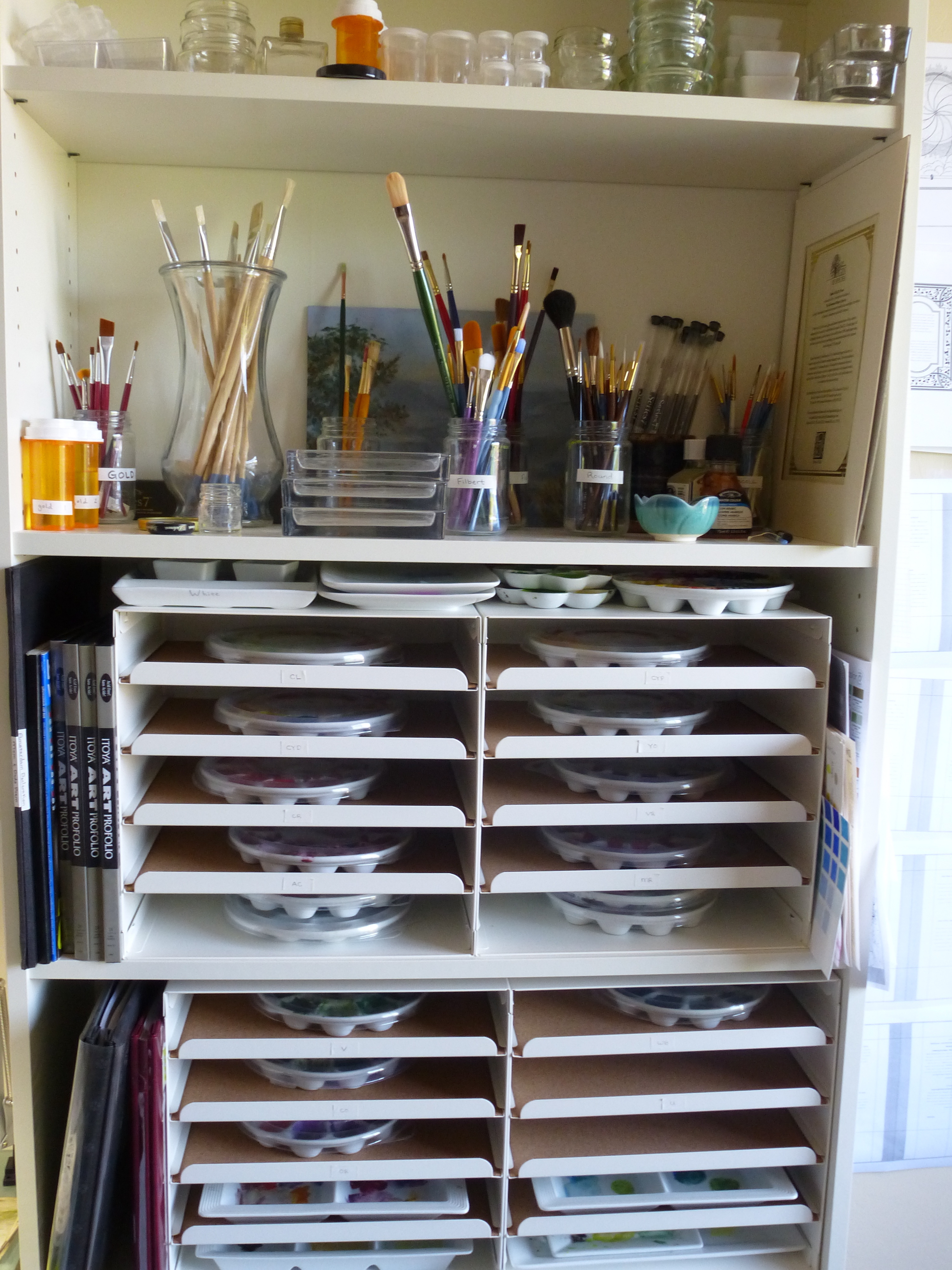 This is the work station for natural-history watercolors, currently occupied by Kelly’s beetle paintings. 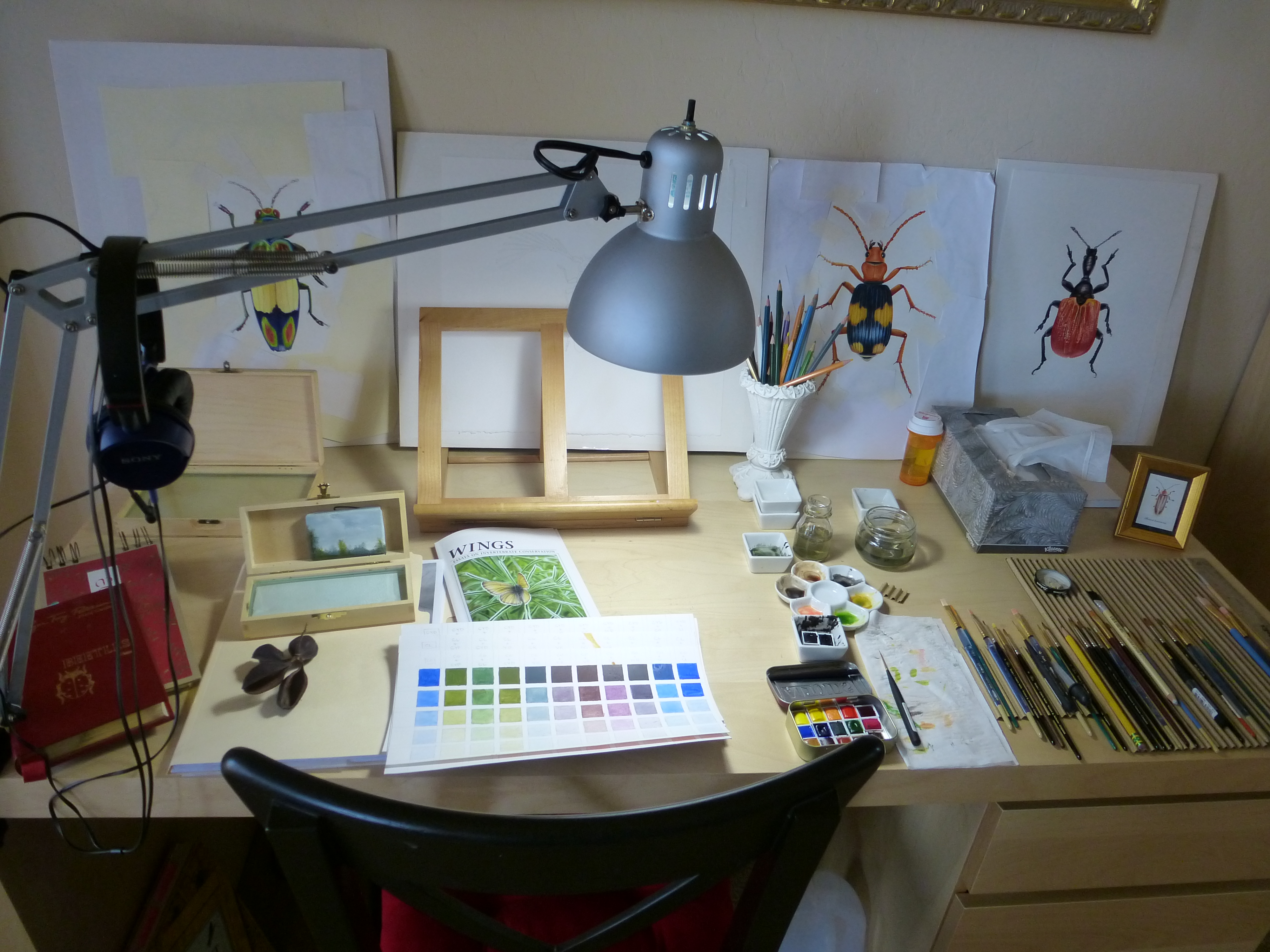 This is how individual beetle paintings are planned. Each step of the final image is documented and described so that it can be reproduced precisely. I was pretty damn impressed by this degree of care: 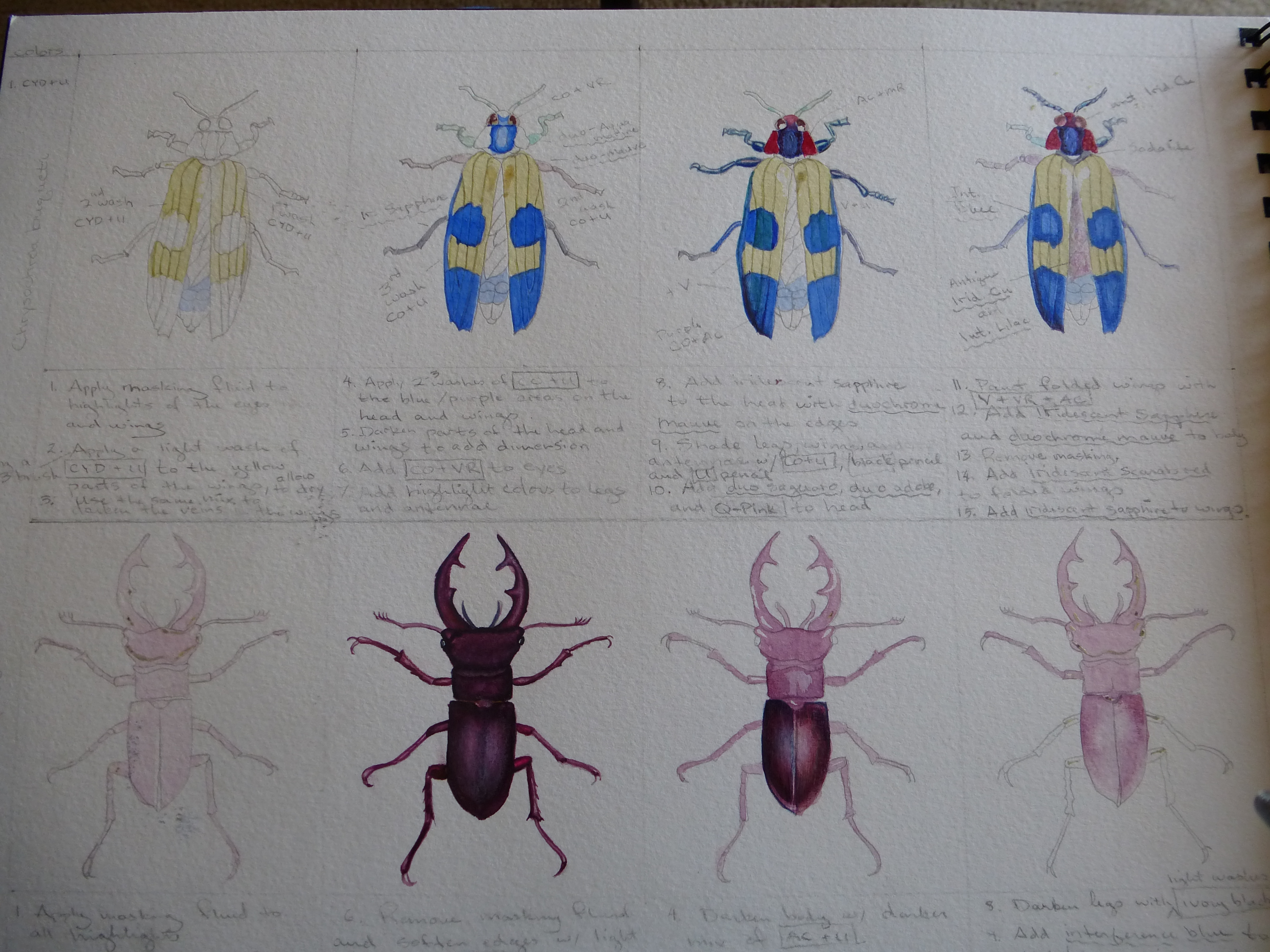 Kelly also makes miniature books (I believed they’re strictly defined as books no larger than three inches on a side). They are avidly collected by miniature-book mavens; I had no idea that this area even existed. This is the station where she assembles the books. 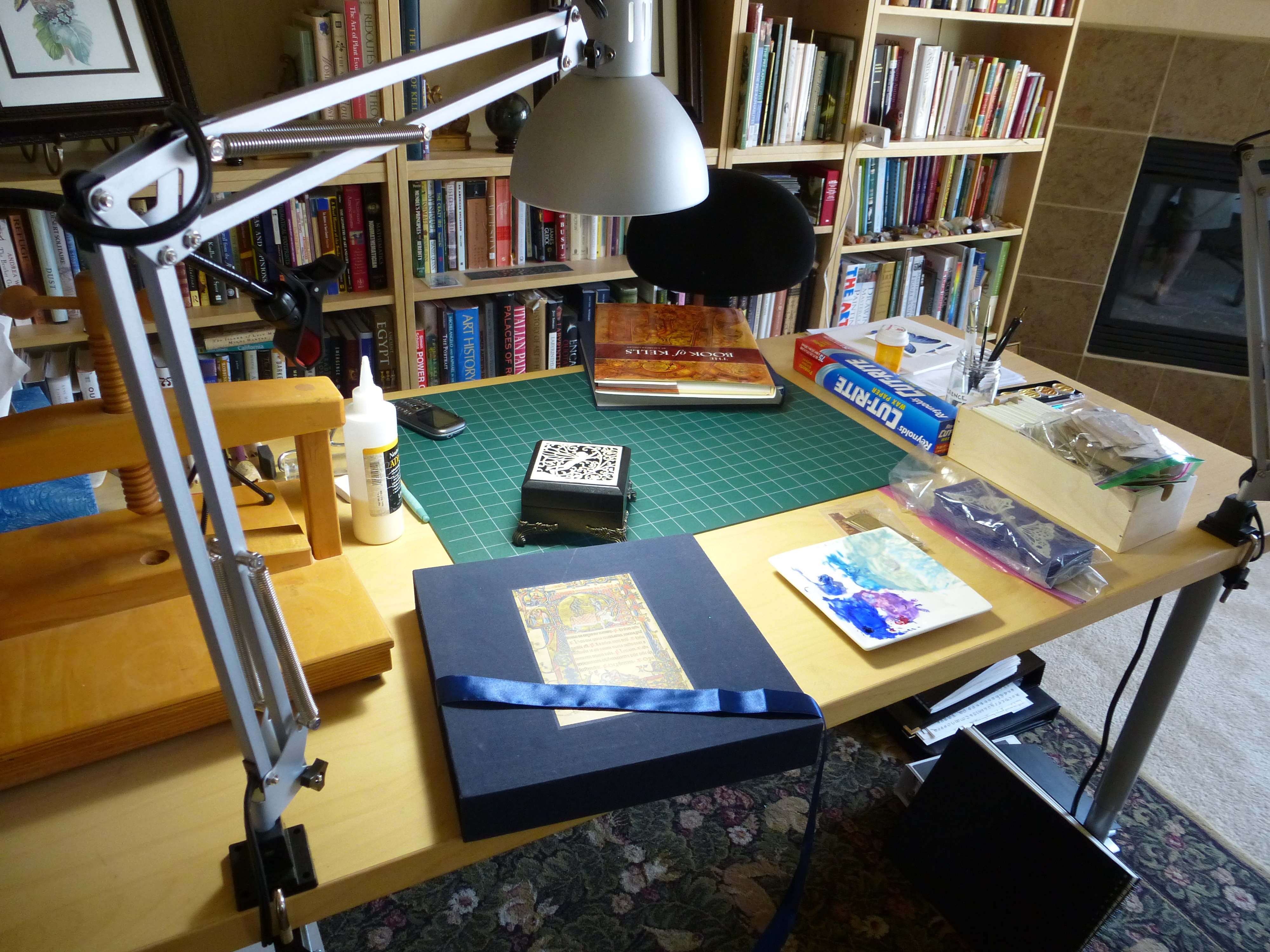 I’ll let Kelly describe her latest project, an amazing tiny book encased in a handmade box and with a morpho butterfly that appears when you open the box. It’s all in service of the story told in the book:

The Artist of the Beautiful by Nathaniel Hawthorne can be read as an allegory of the conflict between the pursuit of artistic beauty and utilitarianism. Owen Warland, a clockmaker’s apprentice, neglects his duties in his retired master’s clock shop to pursue his dream of creating a lifelike, mechanical butterfly. Inspired by nature and his love for Annie, the shop owner’s daughter, Owen vows to put “the very spirit of beauty into form and give it motion.” When he experiences setbacks and failures, he regains his focus and resilience by turning to nature and his boyhood pastime of studying the intricate forms of birds and insects. Owen submits to his pursuit of beauty so completely that he loses all track of time and his work in the clock shop suffers. By the time he finally reaches his goal and presents his marvelous creation to Annie, she is married to a blacksmith, and they have a child. Owen hands Annie a box. When she opens it, a delicate butterfly emerges, steps onto on her finger, and proceeds to fly around the room. Annie and her husband are amazed, but when their child attempts to capture the butterfly, it is destroyed in an instant. Surprisingly, Owen remains calm and content, having experienced the numinous through the creative process.
The box for this miniature book edition of Hawthorne’s classic was inspired by his description of the box in which Owen presents the butterfly to Annie:
“He produced, as he spoke, what seemed a jewel box. It was carved richly out of ebony by his own hand, and inlaid with a fanciful tracery of pearl, representing a boy in pursuit of a butterfly, which, elsewhere, had become a winged spirit, and was flying heavenward; while the boy, or youth, had found such efficacy in his strong desire that he ascended from earth to cloud, and from cloud to celestial atmosphere, to win the beautiful.” 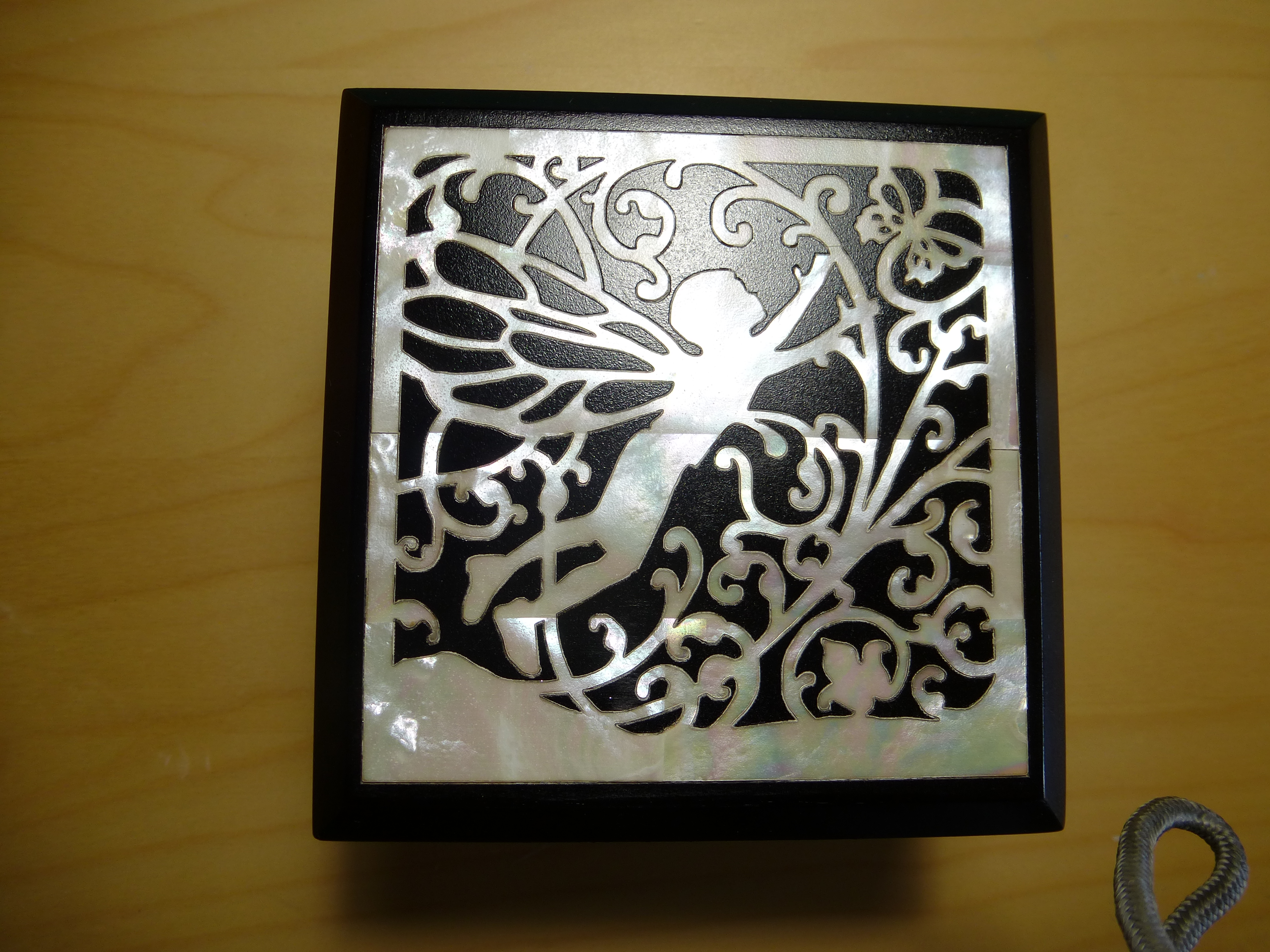 The box was handmade by Mike Houle, and the book was designed and digitally typeset by Ken Howard. I designed the pearl inlay, sewed the books by hand, and bound them in cloth with hand-marbled endpapers by Ann Muir. I also painted the pop-up butterfly on both sides with iridescent watercolors. The book was made in an edition of 8. There are 6 copies remaining, one of which is listed on the Books of Kell’s Press Ebay auction site booksilluminated
A percentage of the sales from this book is being donated to DebRa of America, an organization that funds medical research and helps children with and their families cope with Epidermolysis Bullosa, also known as “The Worst Disease You’ve Never Heard Of.™”

This lifelike morpho butterfly, painted on both sides, pops up when you open the box: 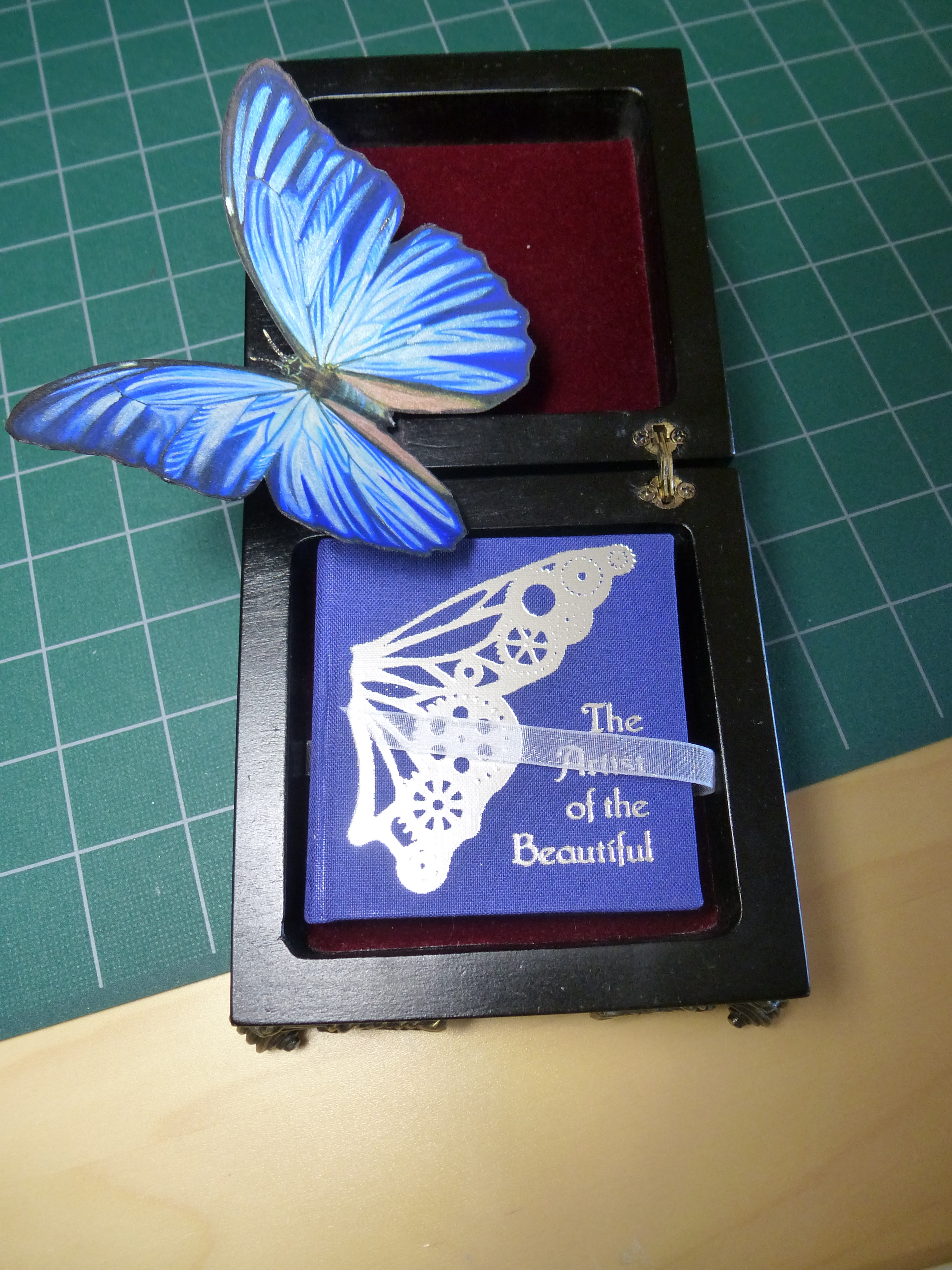 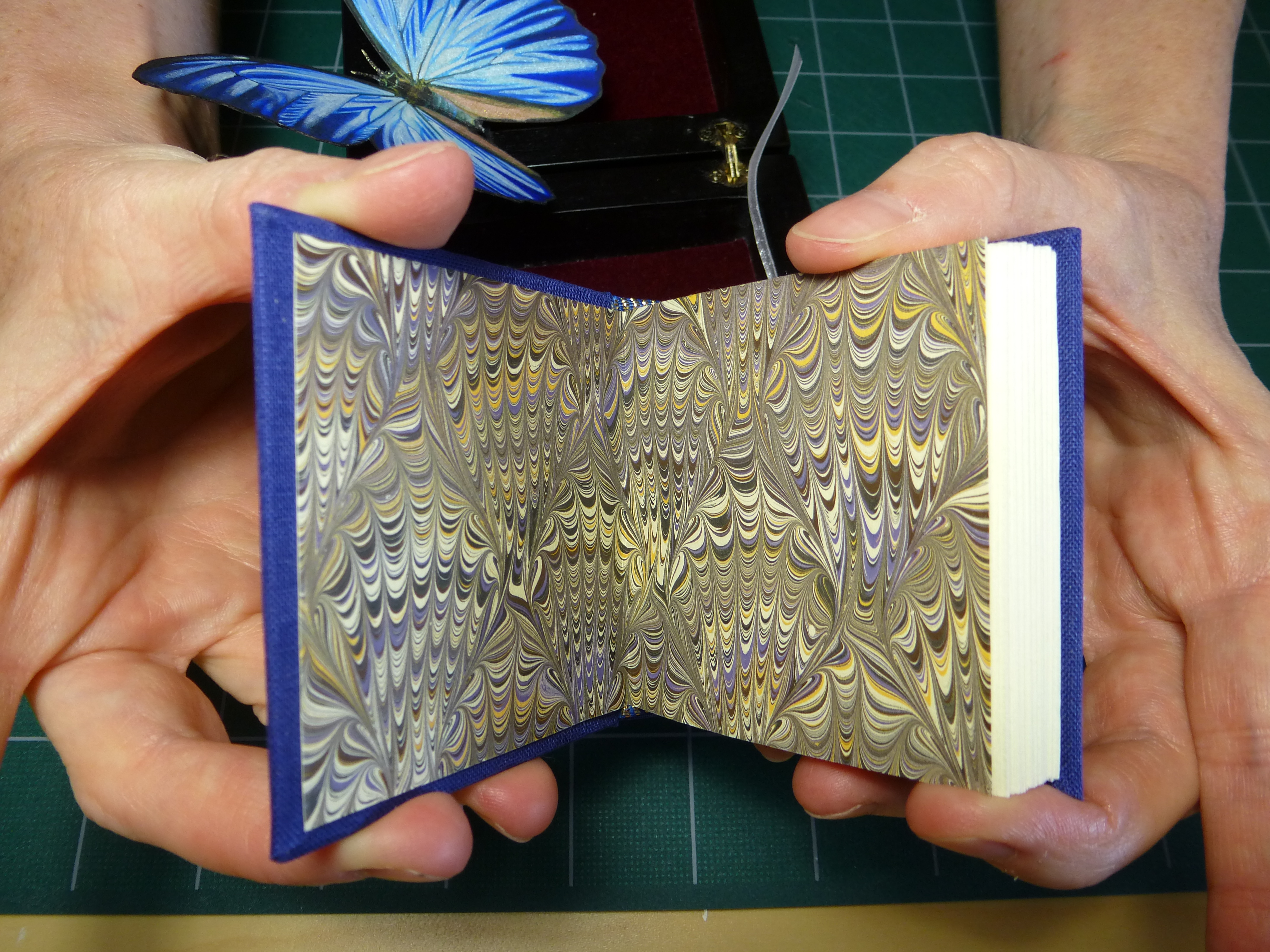 The calligraphy of the book’s text: 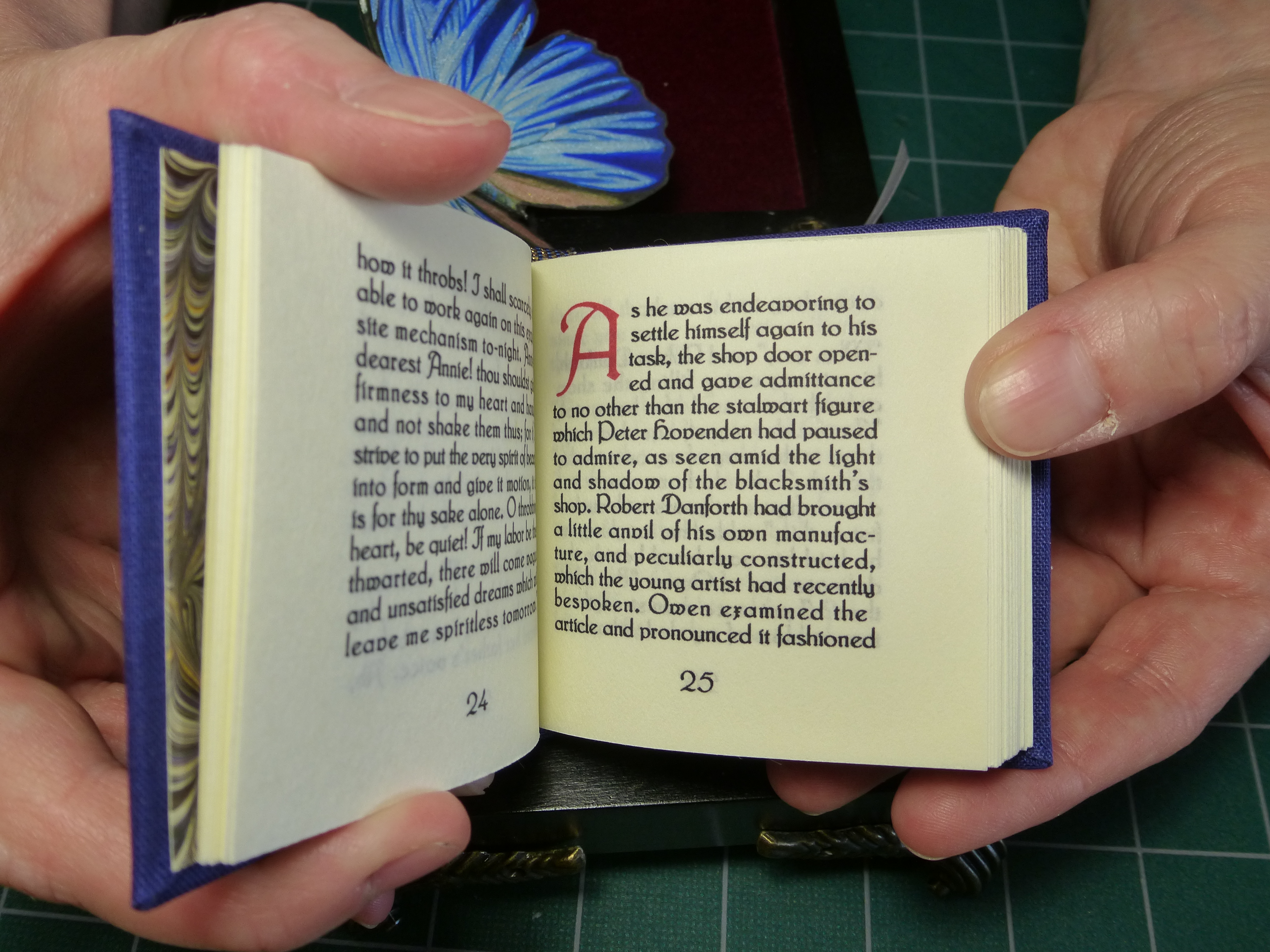 One of Kelly’s miniature beetle books: 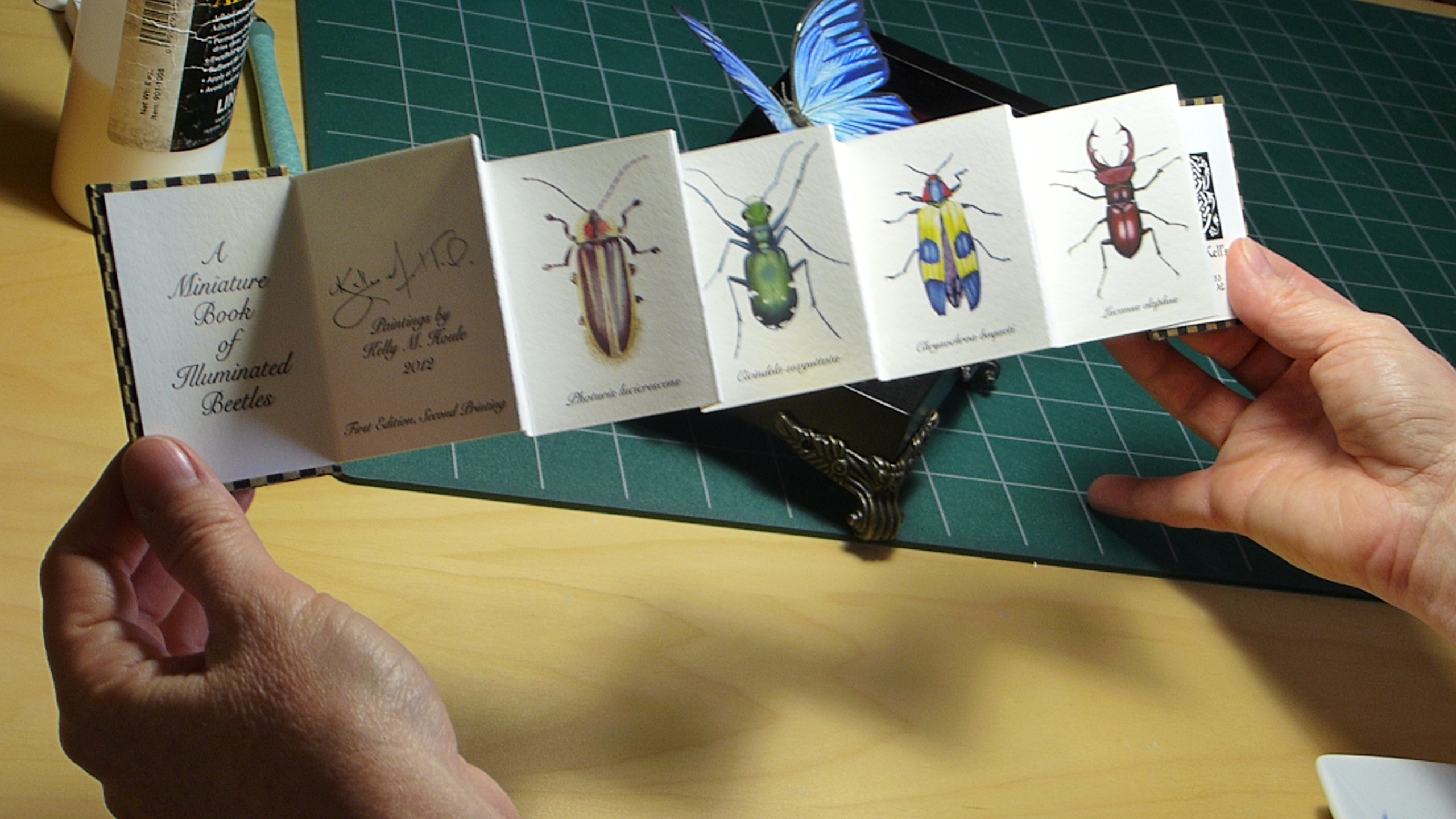 Finally, Kelly gave me this lovely watercolor of Darwin’s orchid, Angraecum sesquipedale, a Madagascar orchid with an enormous nectar spur (27–43 cm, or 10.6–16.9 in). As Wikipedia notes:

[The orchid] is noteworthy for its long spur and its association with the naturalist Charles Darwin, who surmised that the flower was pollinated by a then undiscovered moth with a proboscis whose length was unprecedented at the time. His prediction had gone unverified until 21 years after his death, when the moth was discovered and his conjecture vindicated. The story of its postulated pollinator has come to be seen as one of the celebrated predictions of the theory of evolution. 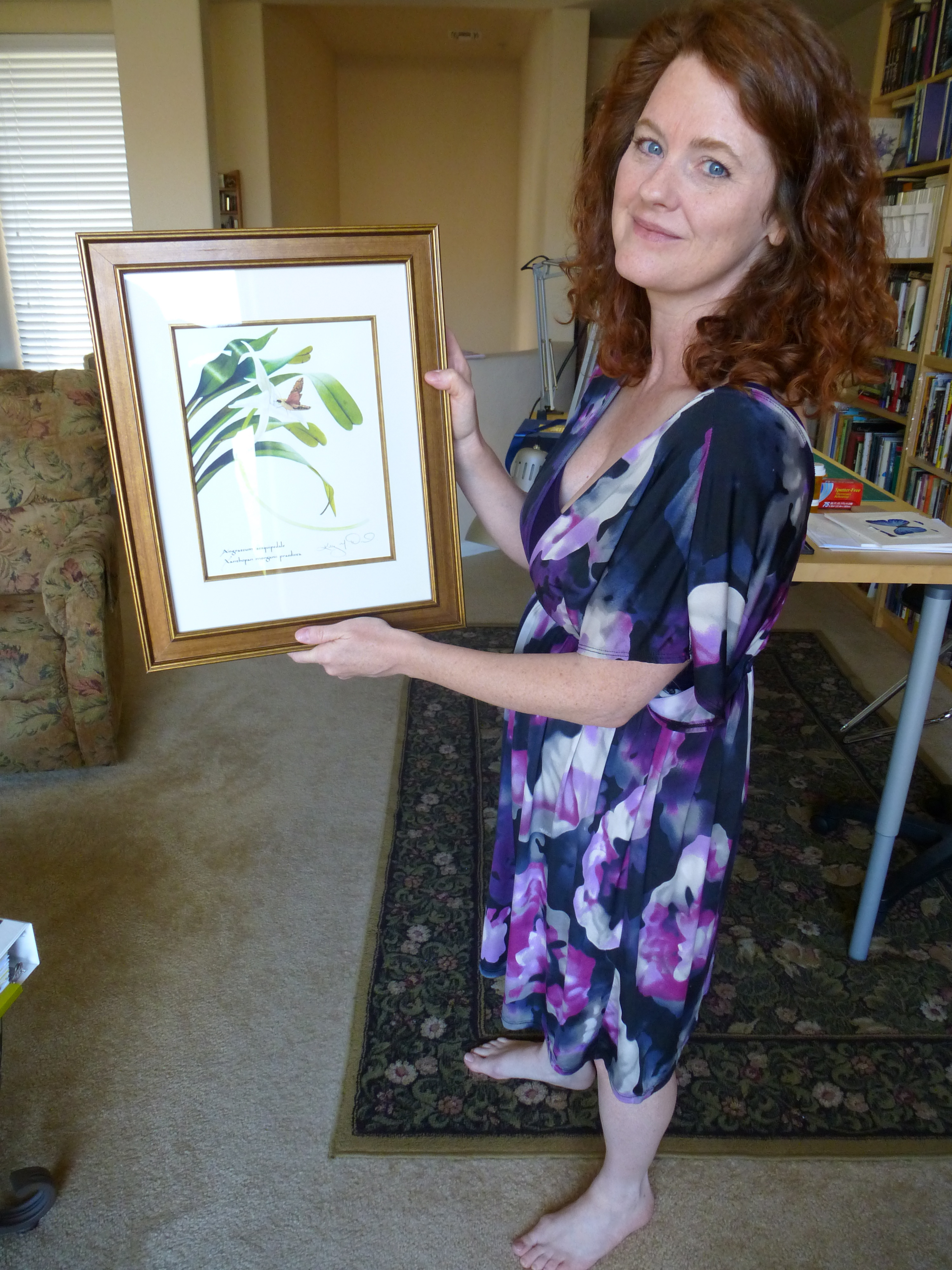 My friend Phil deVries recently captured the first video of the moth actually pollinating the orchid. You can see the video, and my post about it, here.  The picture above was one of the illustrations that Kelly added to our auctioned-off copy of WEIT.  This copy, however, will grace my wall. I ‘ll post more on our adventures in Arizona when time permits.

33 thoughts on “The art of Kelly Houle: biology, tiny books, and The Origin of Species”