Here are some more photos I took at the Vancouver Aquarium, with today’s concentrating on the beasts shown me by frog researcher and conservationist Kris Rossing, my host.

Arriving at Stanley Park to walk to the Aquarium, I was struck by the number of black squirrels. I noticed a lot more yesterday on the campus of the University of Toronto. Canada is FULL of black squirrels, and I have no idea why: 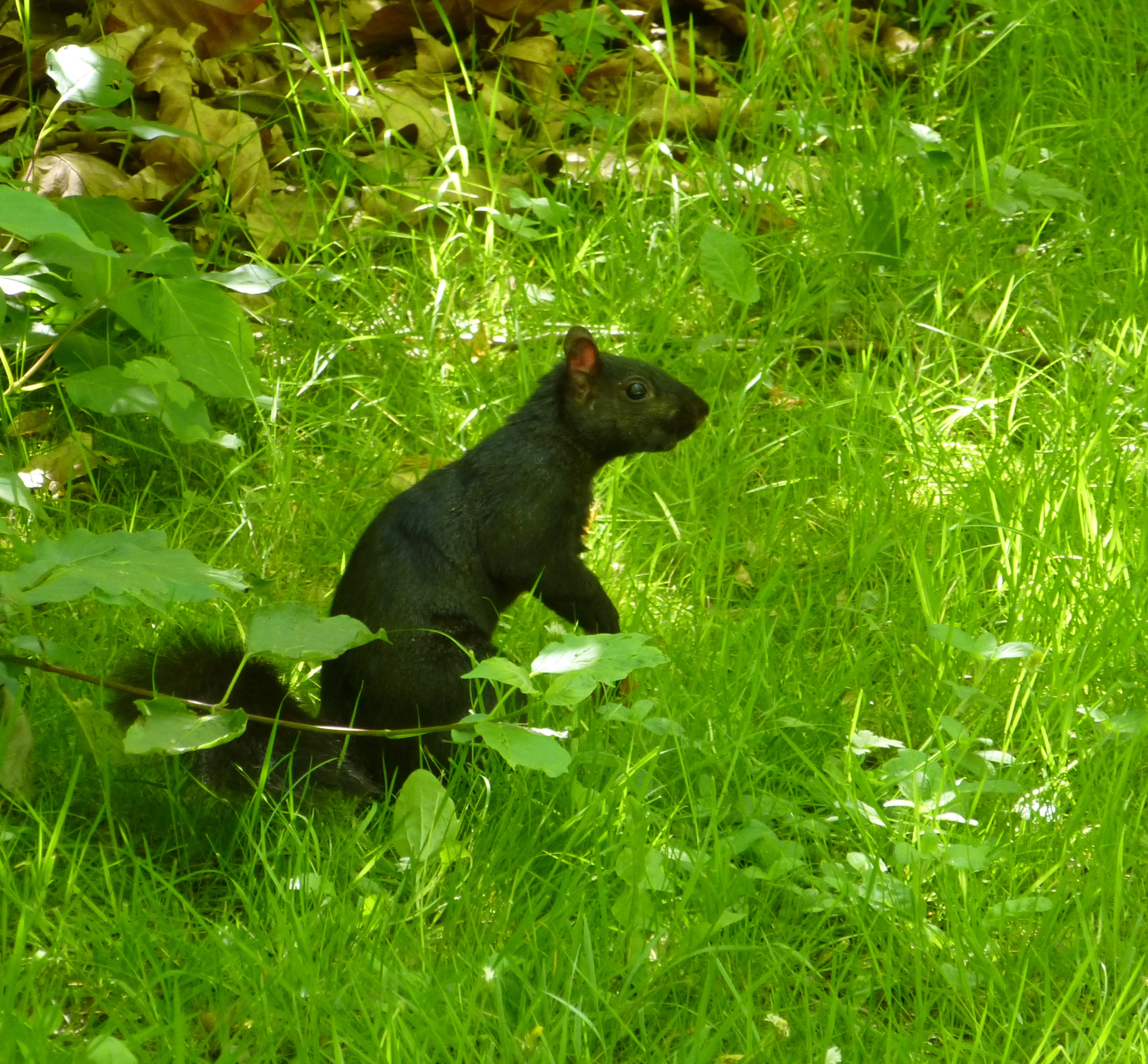 One of the missions of the Aquarium is to save endangered frogs, by either breeding them in captivity for hoped-for later release, or simply preserving nearly extinct species for people to see. One of the endangered ones is the Oregon spotted frog (Rana pretiosa), which appears to be found in only three ponds in British Columbia. It’s endangered because of habitat loss and, especially, non-native bullfrogs (introduced for food!), which have the habit of eating the spotted frogs. They are raising them en mass in the Aquarium, but they are shy, so I didn’t get a good photo. This one is taken from the California Herps site: 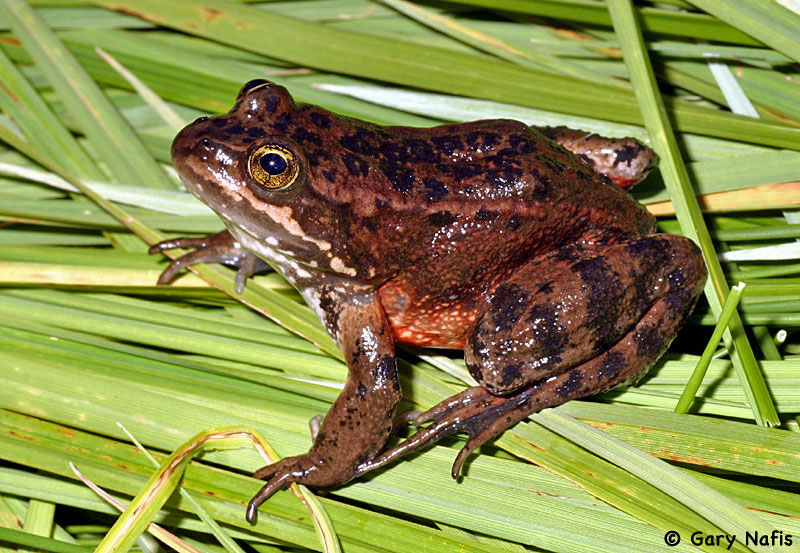 Another endangered species in BC (habitat loss again) is the Northern Leopard Frog (Lithobates pipiens, formerly Rana pipiens). It’s a gorgeous animal and they’re not shy in aquaria, so I was able to take this photo. Look at those lovely golden eyes! 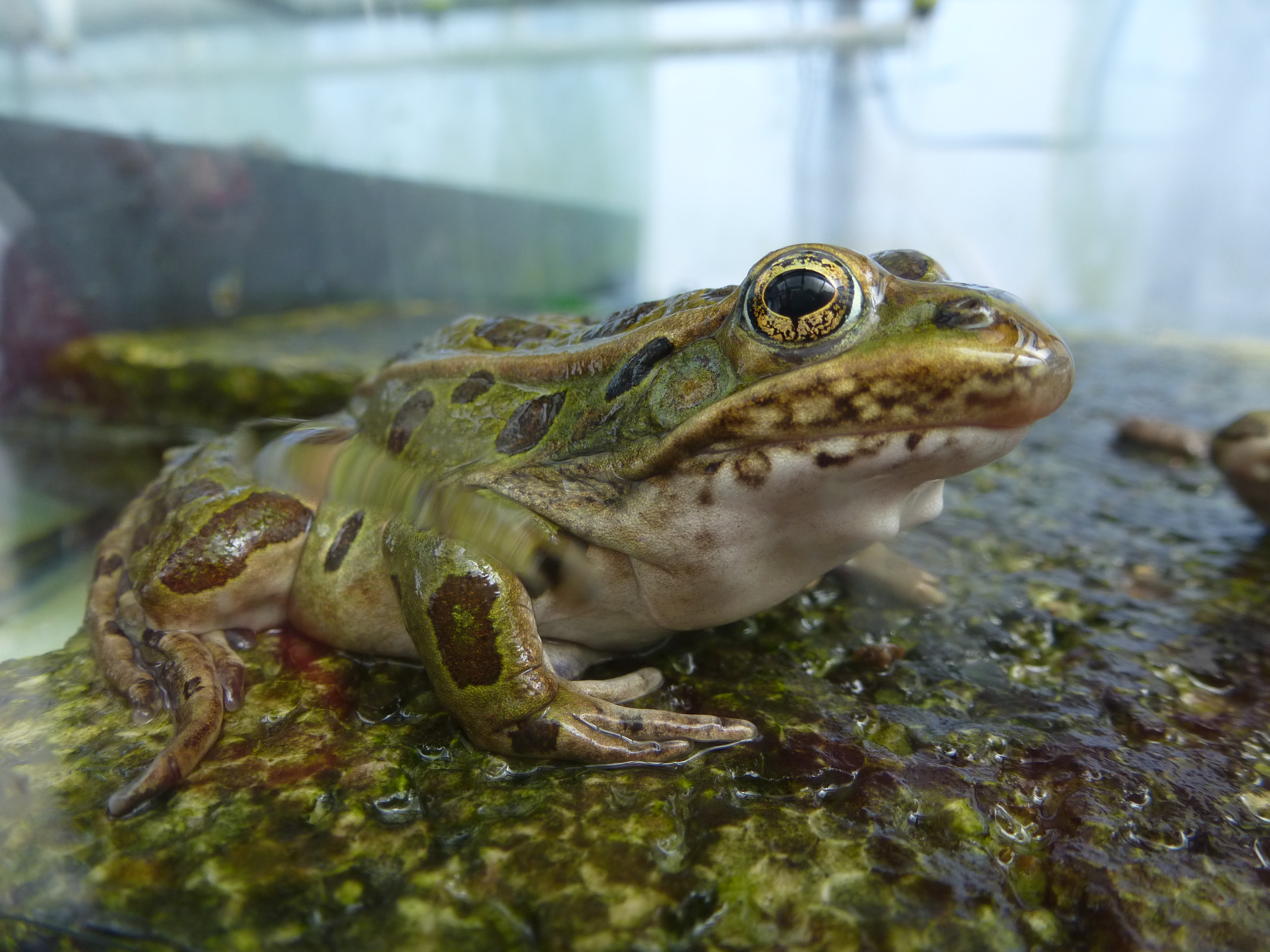 The frog shown below is almost certainly extinct in the wild; it sings with the choir invisible. It is the gorgeous Panamanian golden frog (Atelopus zeteki), which is really a toad. Its extinction is largely due to the infectious fungus “chytrid,” which has wiped out so many frogs. It’s also toxic, as you might tell from its color. Unlike many “poison arrow frogs,” though, its toxin is manufactured in its body. Other such frogs, like dendrobatids, manufacture their poison from their food and lose their toxicity in aquaria: 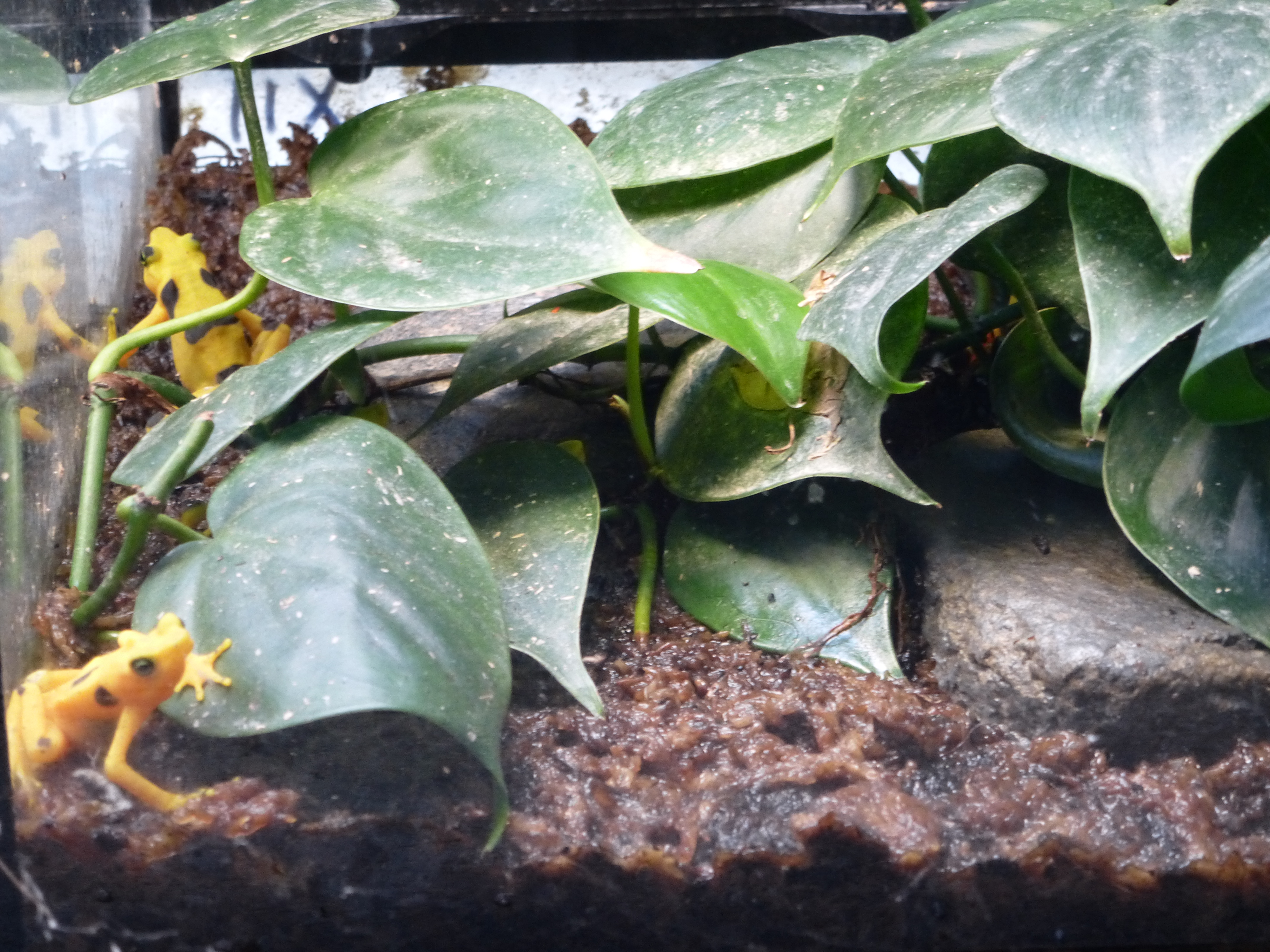 David Attenborough took one of the last videos of this frog in the wild, showing its bizarre behavior of  male arm-waving” to find females and intimidate other males, for their territories are near waterfalls that drown out their calls. Waving is hard for a frog since its front limbs aren’t designed for that behavior!

This frog will probably never again exist in the wild.

The species below, the red-eyed tree frog (Agalychnis callidryas) is, fortunately, not endangered, and is a favorite on frog tee shirts and calendars. It’s an arboreal (tree-dwelling) species found in the Neotropics. In aquaria they tend to cling to the sides of the tank using capillary action of their wet bellies. That gives you the chance to take cool photos like this, taken from the top of a tank. Yes, that’s the whole frog, pressed flat on the glass: 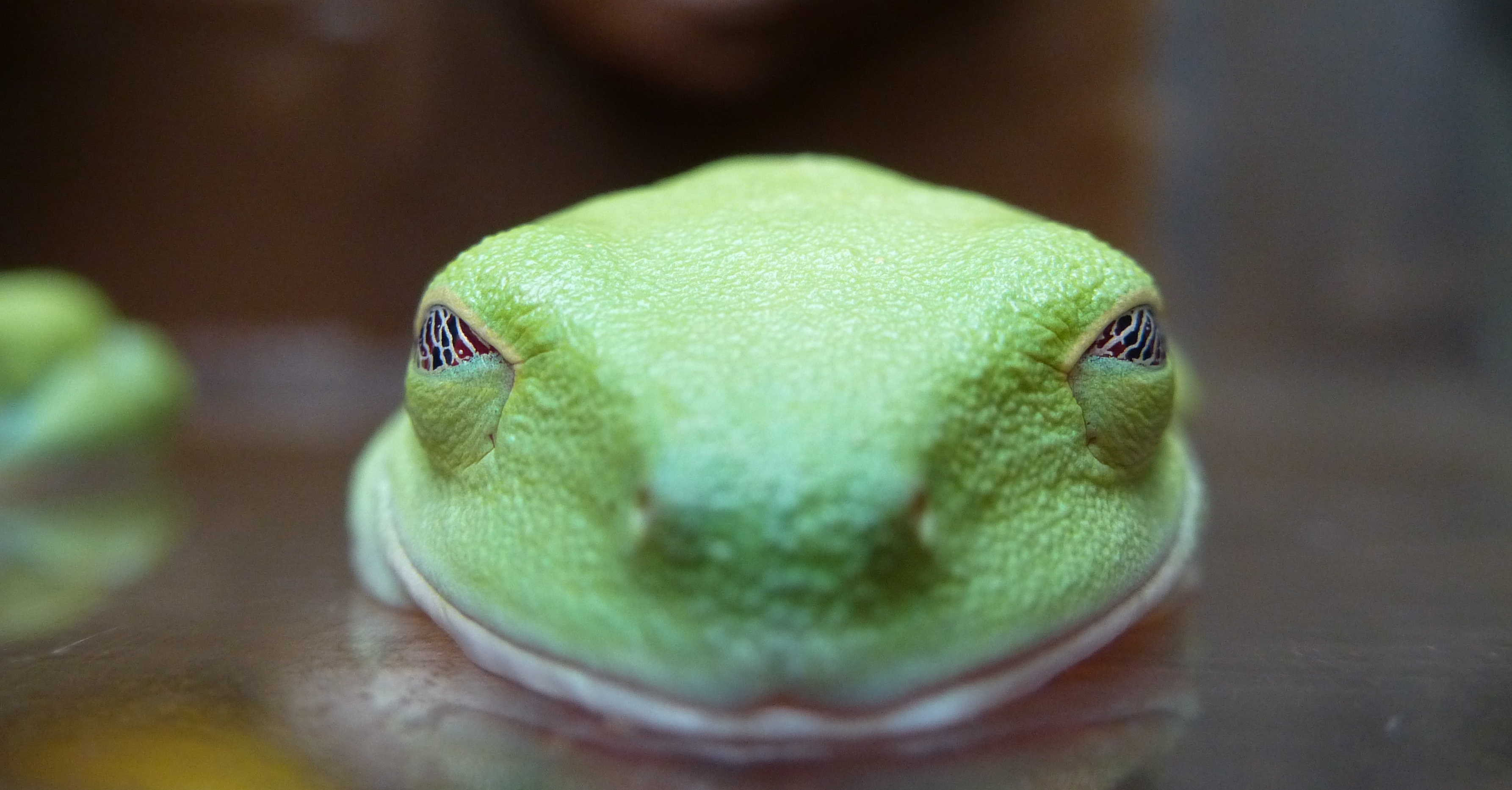 A more conventional view; they spend a lot of time resting on leaves: 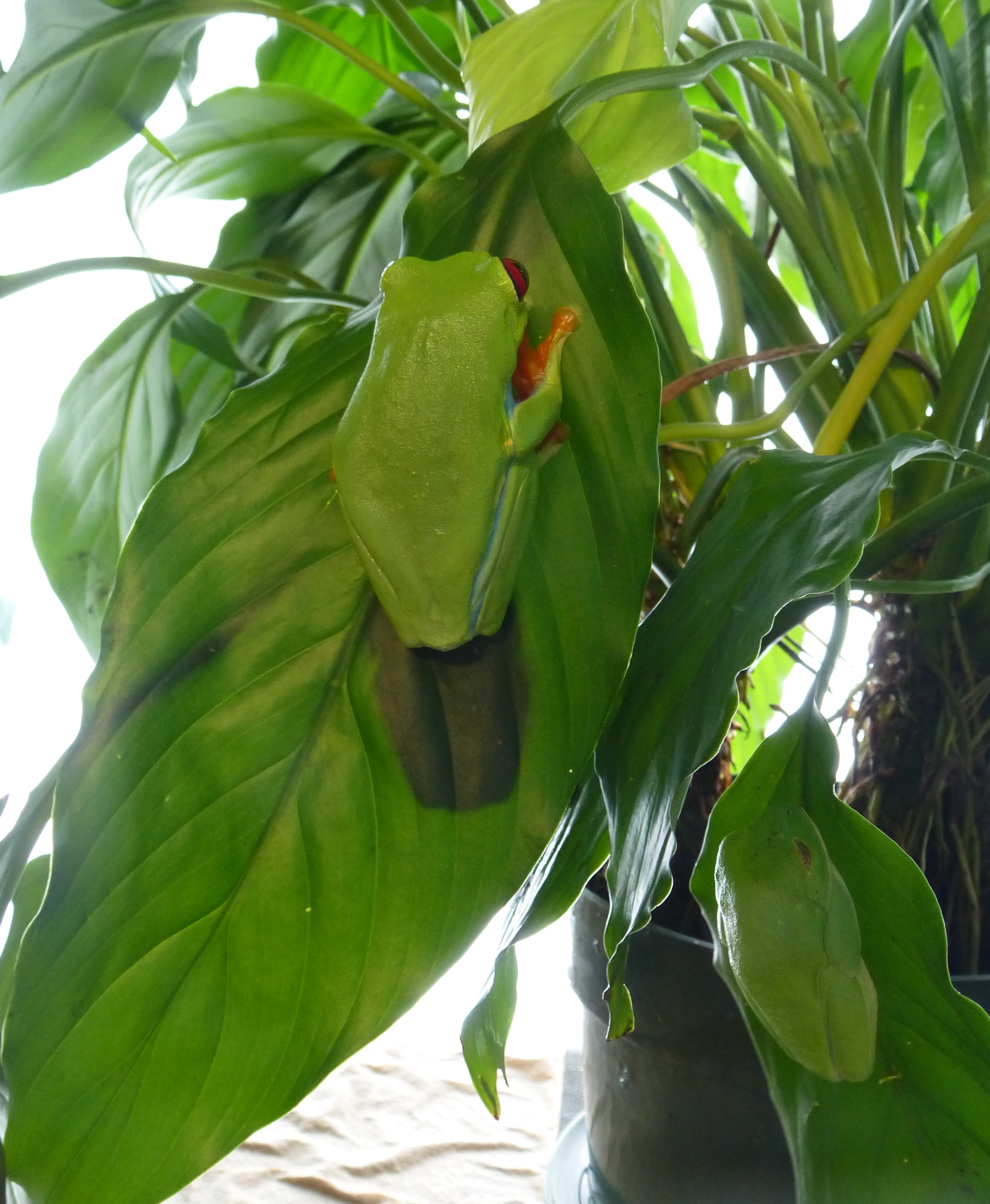 And an indication of its size: 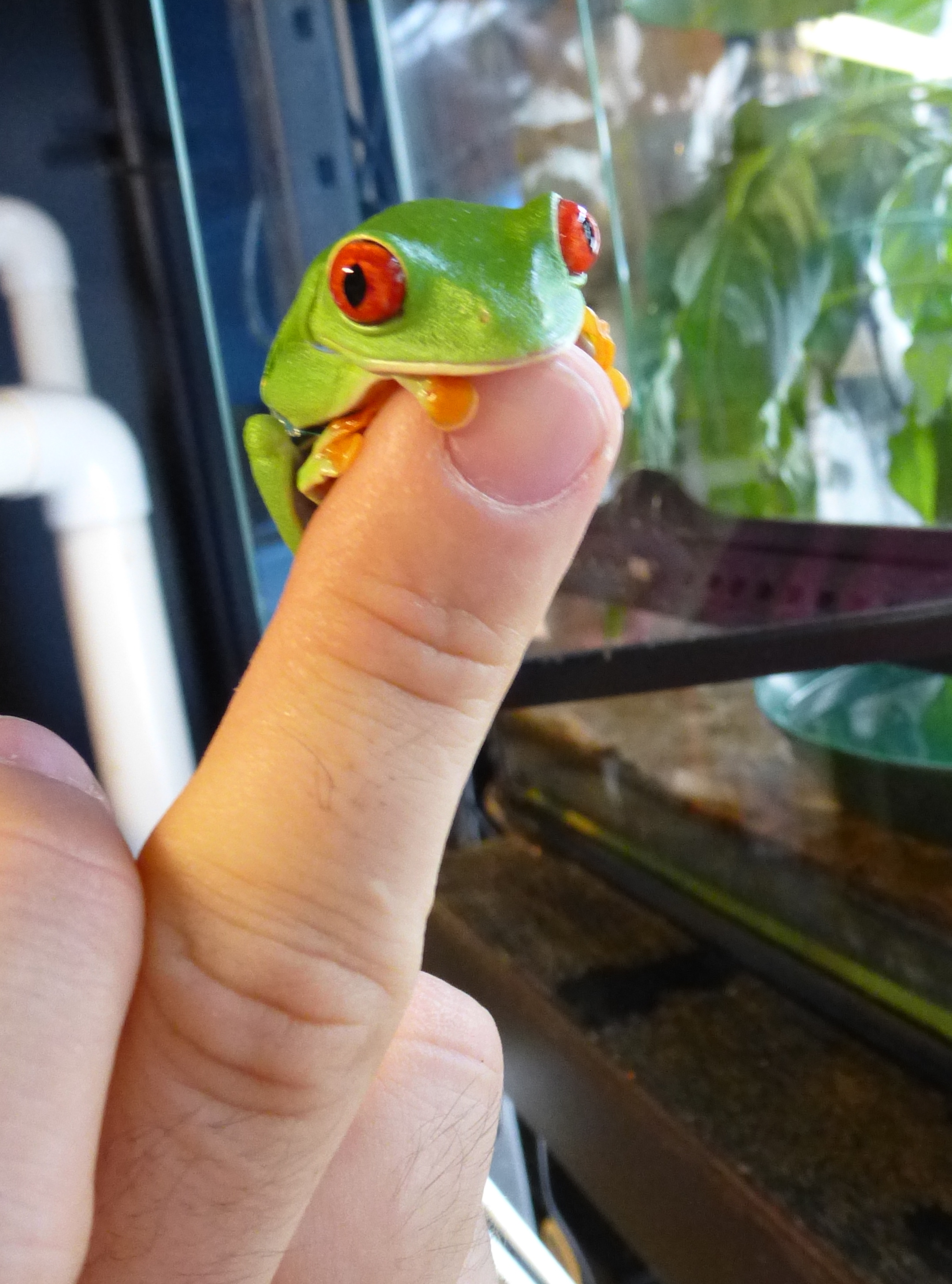 The Aquarium is the holding place for a lot of animals imported illegally into Canada, where they wait until court cases are resolved. This is Kris holding a baby green anaconda (Eunectes murinus): 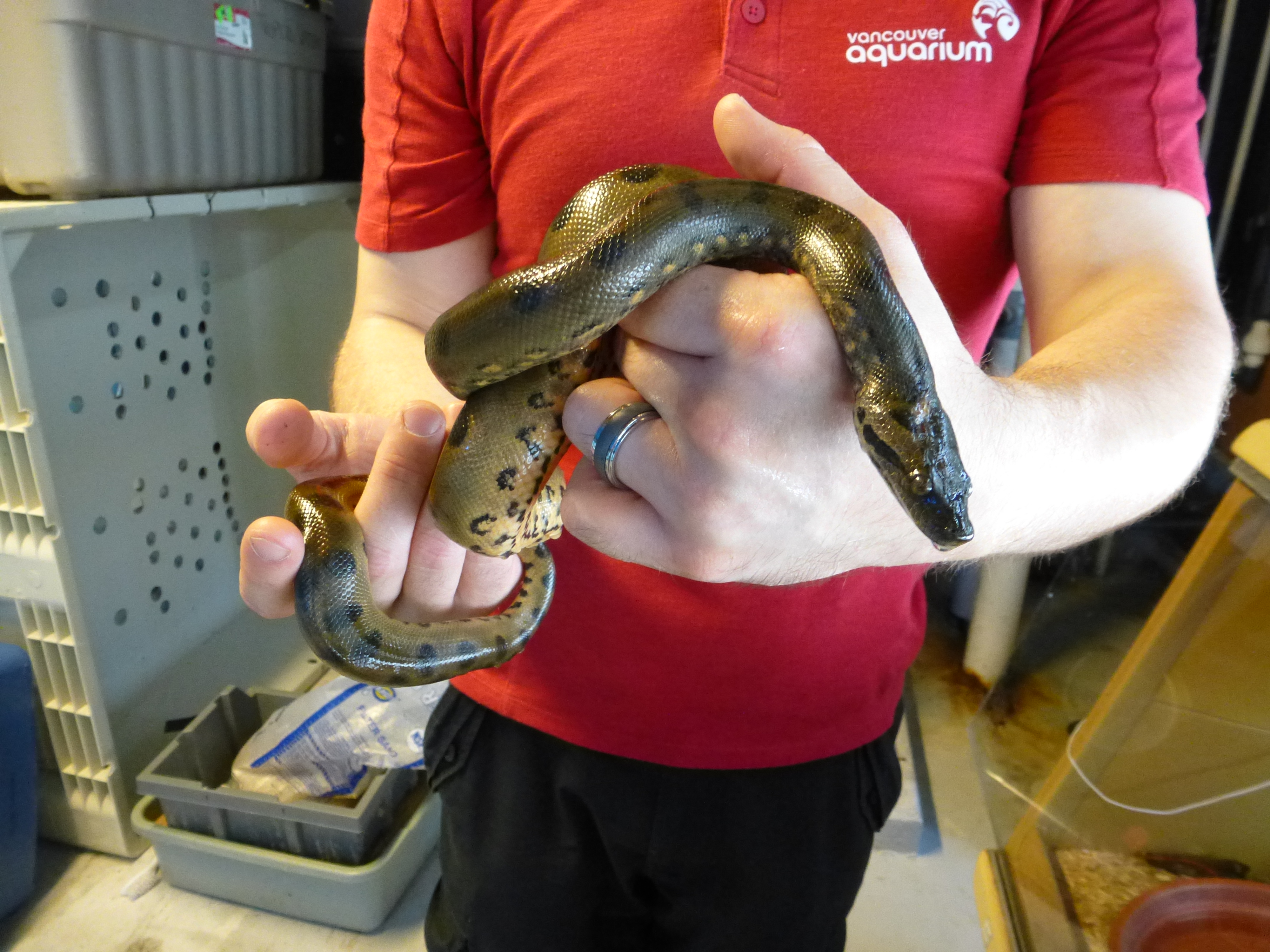 Walking through the vet clinic, I saw a green parrot undergoing an operation. It had either cancer or an infection, and was under anesthesia. I forgot the species, but I hope the bird made it: 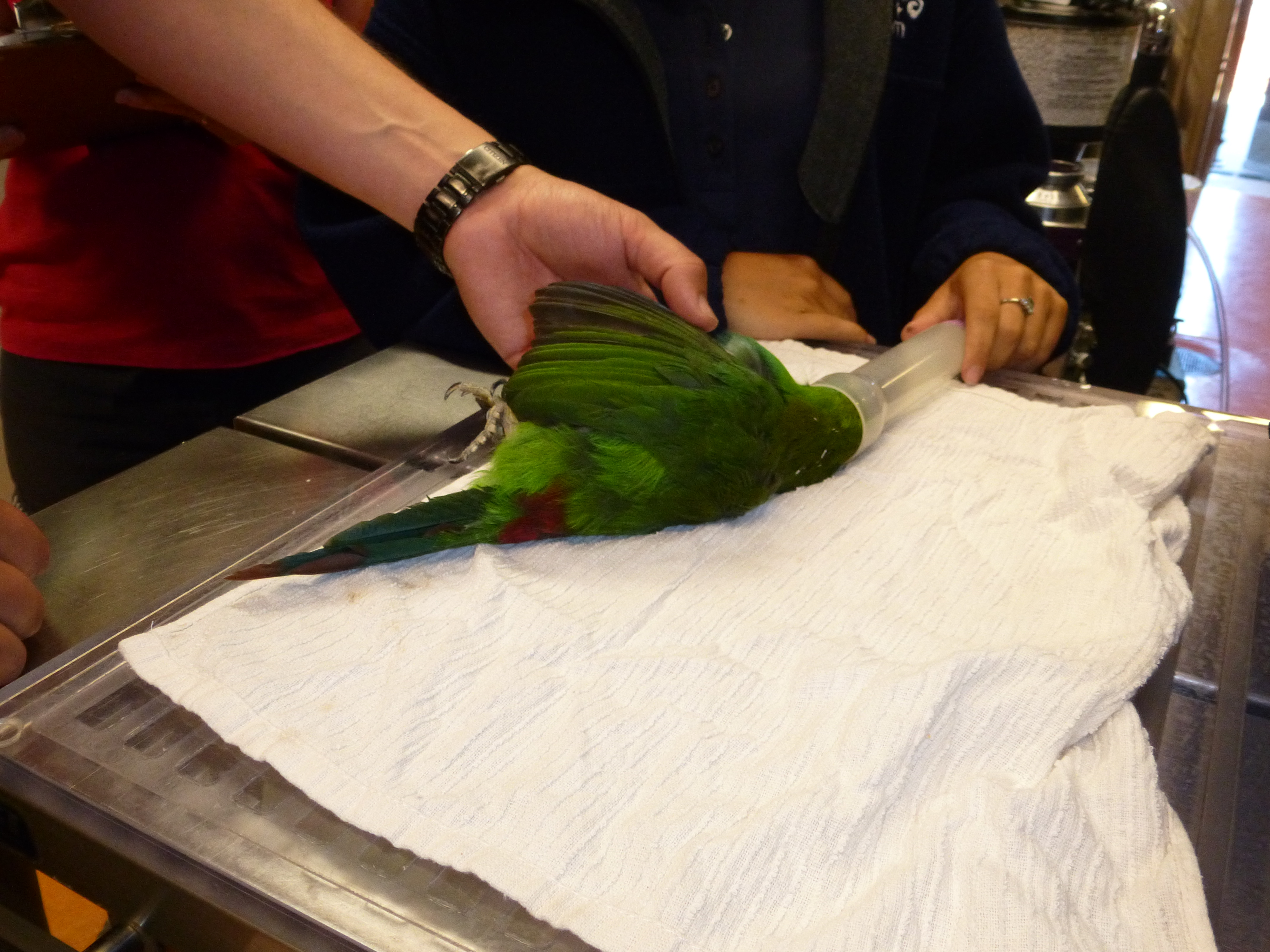 Finally, when I was waiting for the bus into town, this little bandit walked brazenly up to the garbage bin next to me and inspected it for noms. Not finding any, it walked away in disgust. The raccoon (Procyon lotor) was not at all afraid of humans: 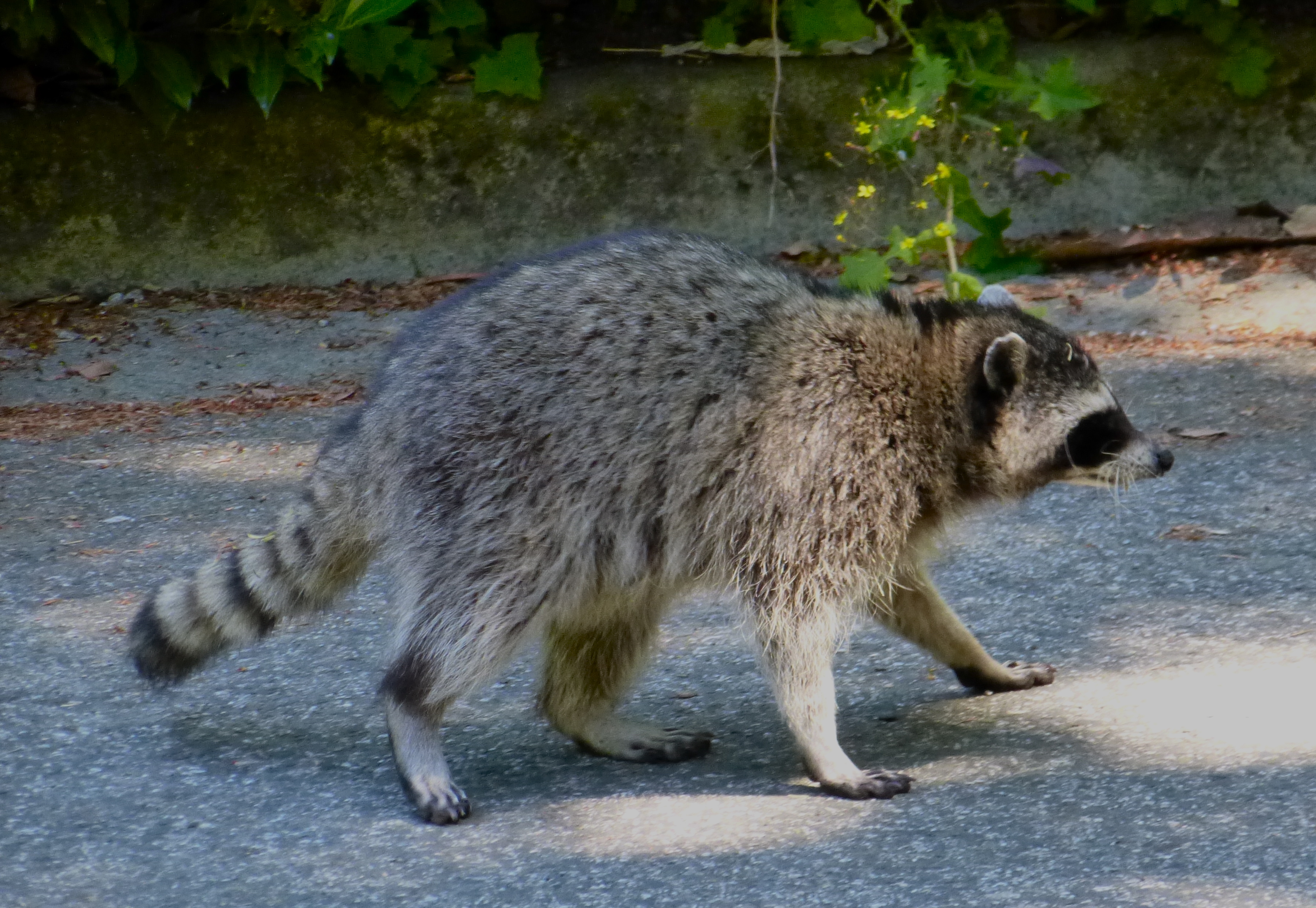 30 thoughts on “More beasts from the Vancouver Aquarium”