This post is most definitely not for the faint-hearted, so you may wish to turn away now, or at least after you’ve looked at this very weird cat gif (pronounced…)

About six weeks back I posted about the blue tit nest box we had set up in our garden in Manchester. Over the few weeks the parents have been flying back and forth, taking prey items (mainly caterpillars) into the nest. We could hear the chicks cheeping away, and although the parents looked a bit scrotty, they seemed to be doing their job. They were very worried about the cats, and would not fly into the box if the cats were around.

Last week the chirping ceased. We assumed they had fledged, and even announced it on Tw*tter. Later on, we heard one chick cheeping, the parents carried on going in. Then eventually there was silence, but the parents carried on bringing food, chirping and looking confused when they received no response from their offspring. Once it was clear that there was nothing going on inside the nest, we decided to take it down. What we found was not nice.

I managed to extract the nest intact: 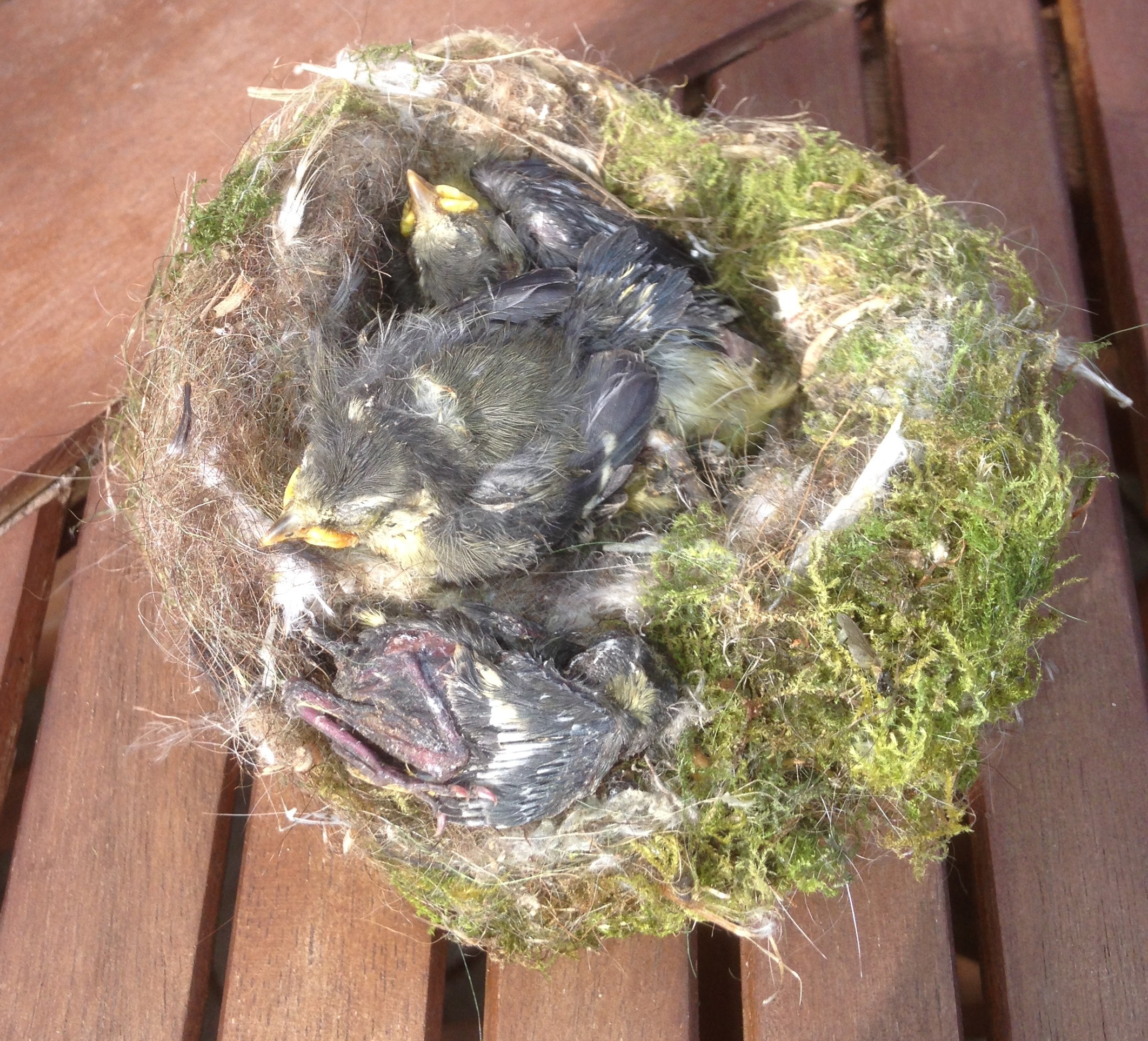 The chicks were all dead, including the one on top, which looks like it might be alive, or sleeping. I fished them out to try and see what had gone wrong. There were five in total – one is still on the nest on this pic: 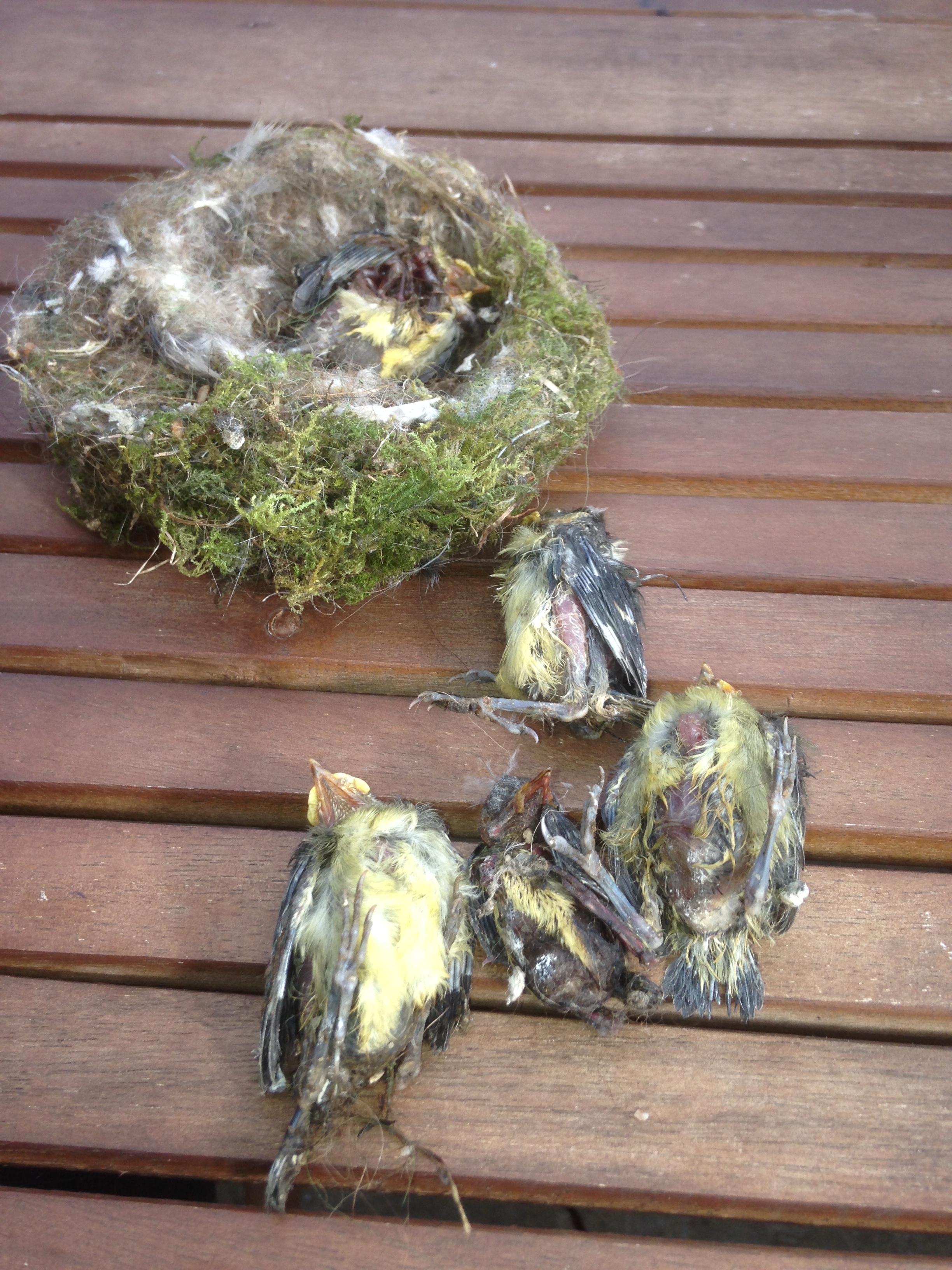 The one in the middle on the bottom was basically mummified – you can see on the top pic that it had been pushed to the edge of the nest. It was the smallest, so presumably was the first to die…

As if that wasn’t bad enough, a really grim discovery awaited when I got out the fifth chick from the nest: 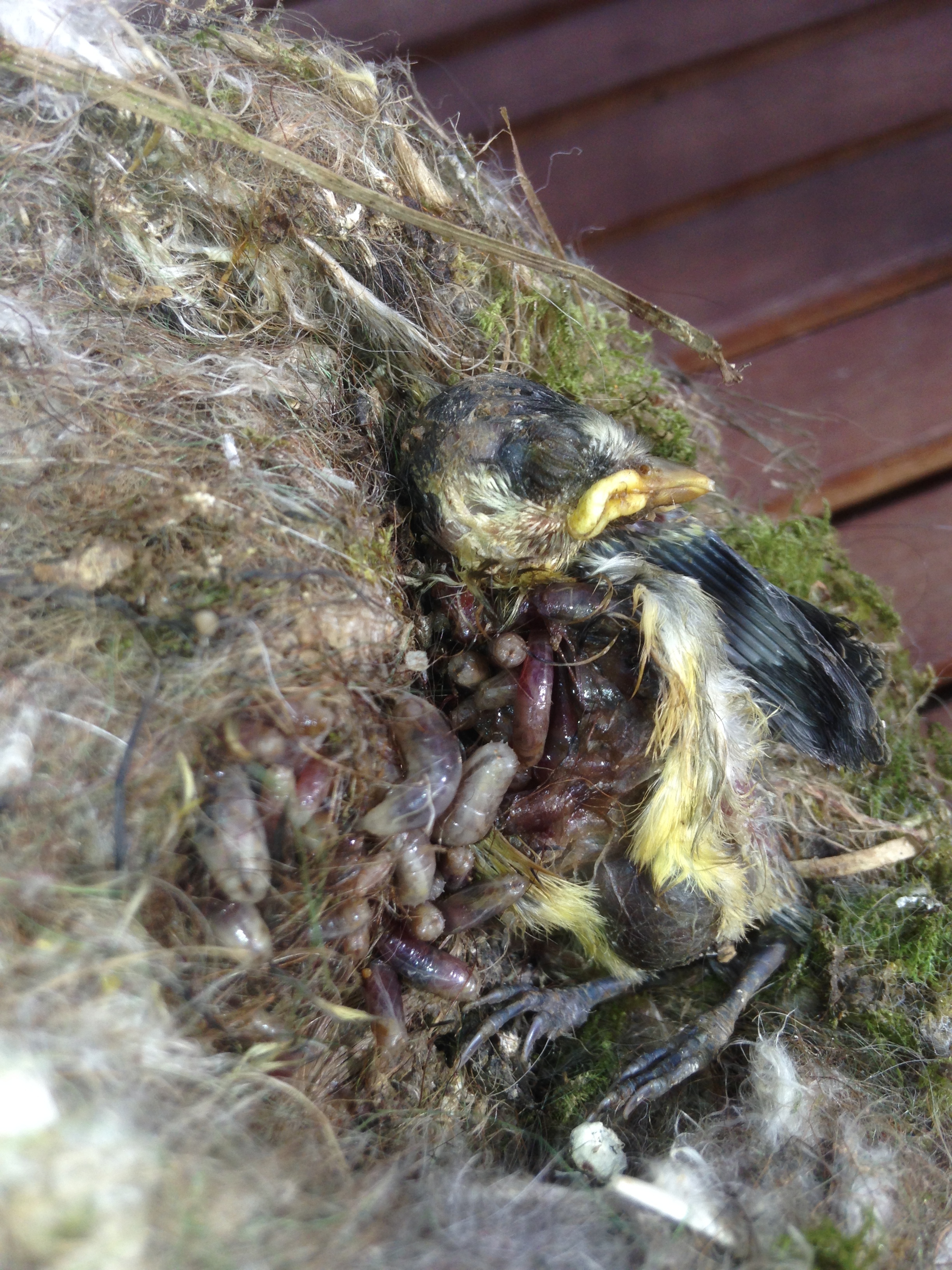 It was heaving with blowfly maggots… The cycle of life – or, more strictly, the cycle of carbon – had taken on an unexpected form. The chicks had all died, and their carbon was about to be converted into flies, which would in turn be turned into birds or spiders or whatever. Nature is pitiless, and natural selection even more so.

So why did they die? Disease seems unlikely – it would have hit them all at the same time. It seems most likely that they simply starved to death. Spring has not been particularly early or warm this year, and although the parents seemed to be attentive, they appear not to have been able to find enough food for their brood.

We hope – but we don’t know – that the brood was bigger than the five dead nestlings we found, and that some of the chicks successfully fledged. On the other hand, we haven’t seen the parents around feeding babies in the trees, which we have done in previous years. I fear these five were all there were.

This is not an uncommon occurrence, but it is sad. I’ll clean out the box in the winter and then put it up again, ready for another attempt next year.

Apologies to those of you who found that too grim – you were warned.

42 thoughts on “The grim cycle of life: our blue tit nest failed”