Spring has most definitely sprung in the UK (I have seen my first swallow and house martin – my beloved swifts will turn up at the end of the month). And a pair of the local blue tits (Cyanistes caeruleus) have been inspecting the nest box we have fixed to the side of the house, way out of reach of the cats. Here’s a rather blurred photo of one of them nipping in the other day: 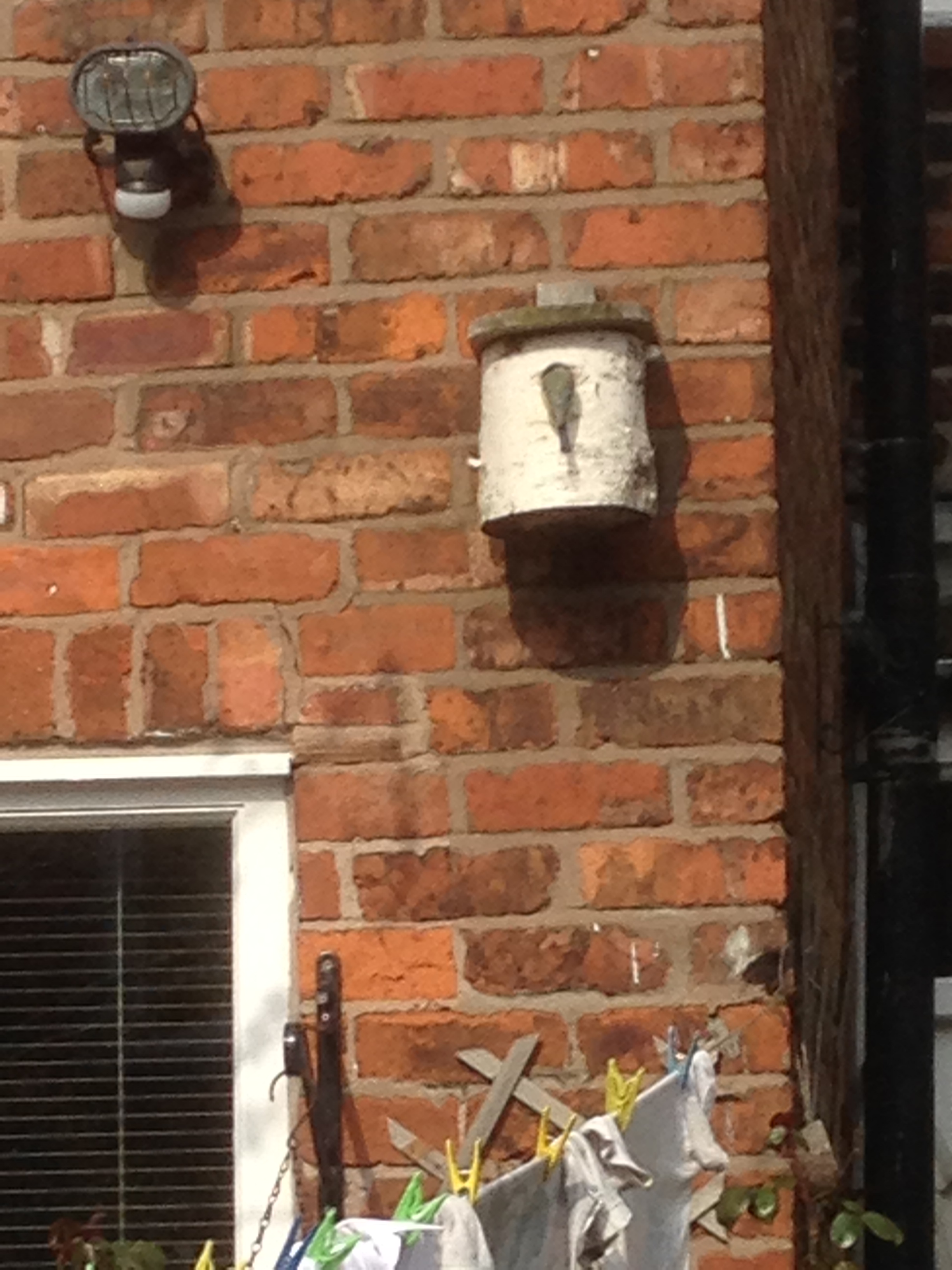 We’ve had birds nesting in there a number of times, but last year, nothing, except a bumblebee queen who decided to make her nest there in mid-summer, when the blue tits had already turned their beaks up at the possibility of using the box. I know that birds don’t like nesting in sites where bees have been, so a few months back I decided to clean out the nest box to encourage the birds to return this spring. What I discovered is a lovely tale of the cycle of life.

Here’s the box, ready to be opened. 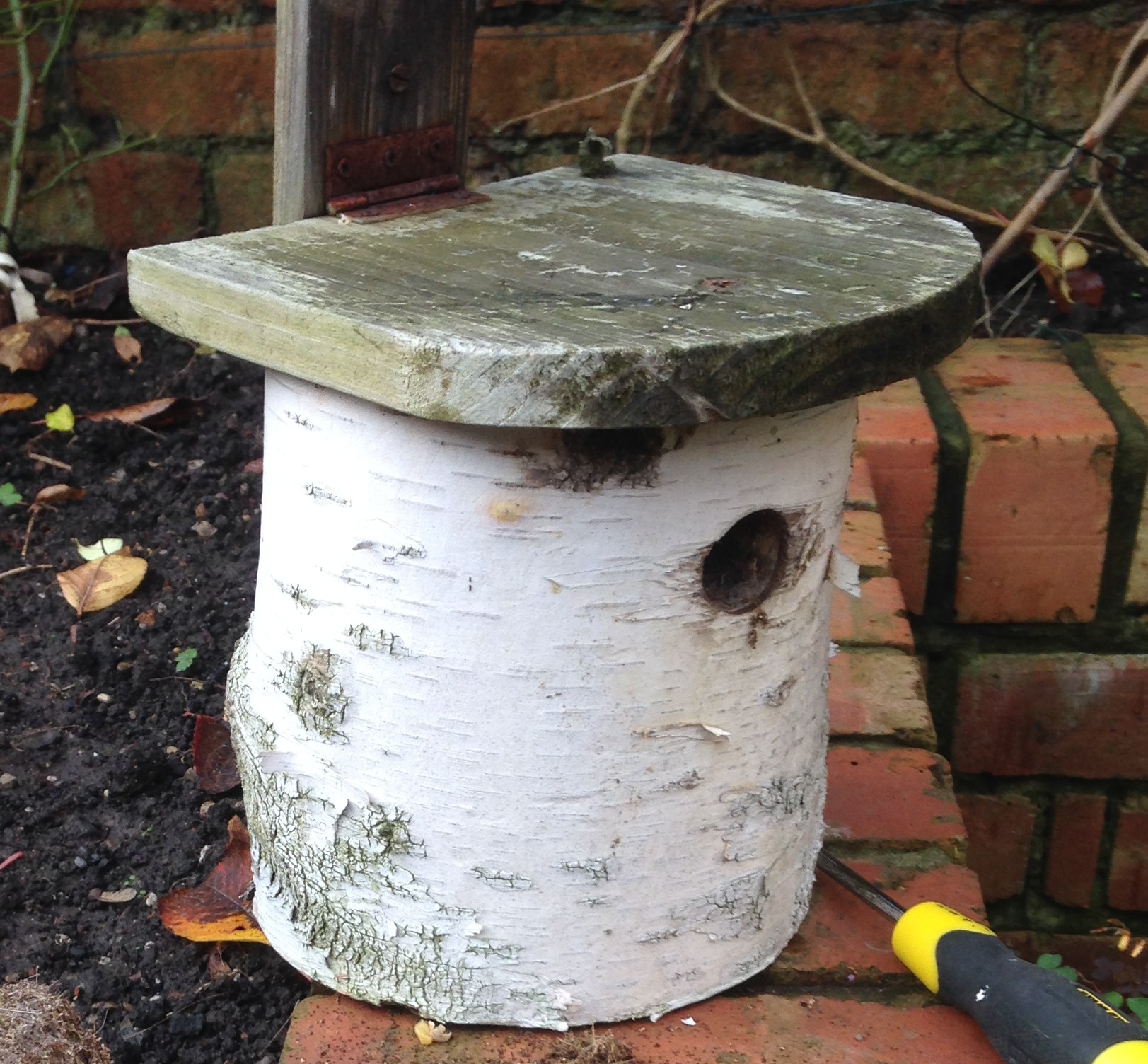 And here’s what I found inside. Bits of a battered nest, as I expected, and also a dead bumblebee (you can just make out her wing): 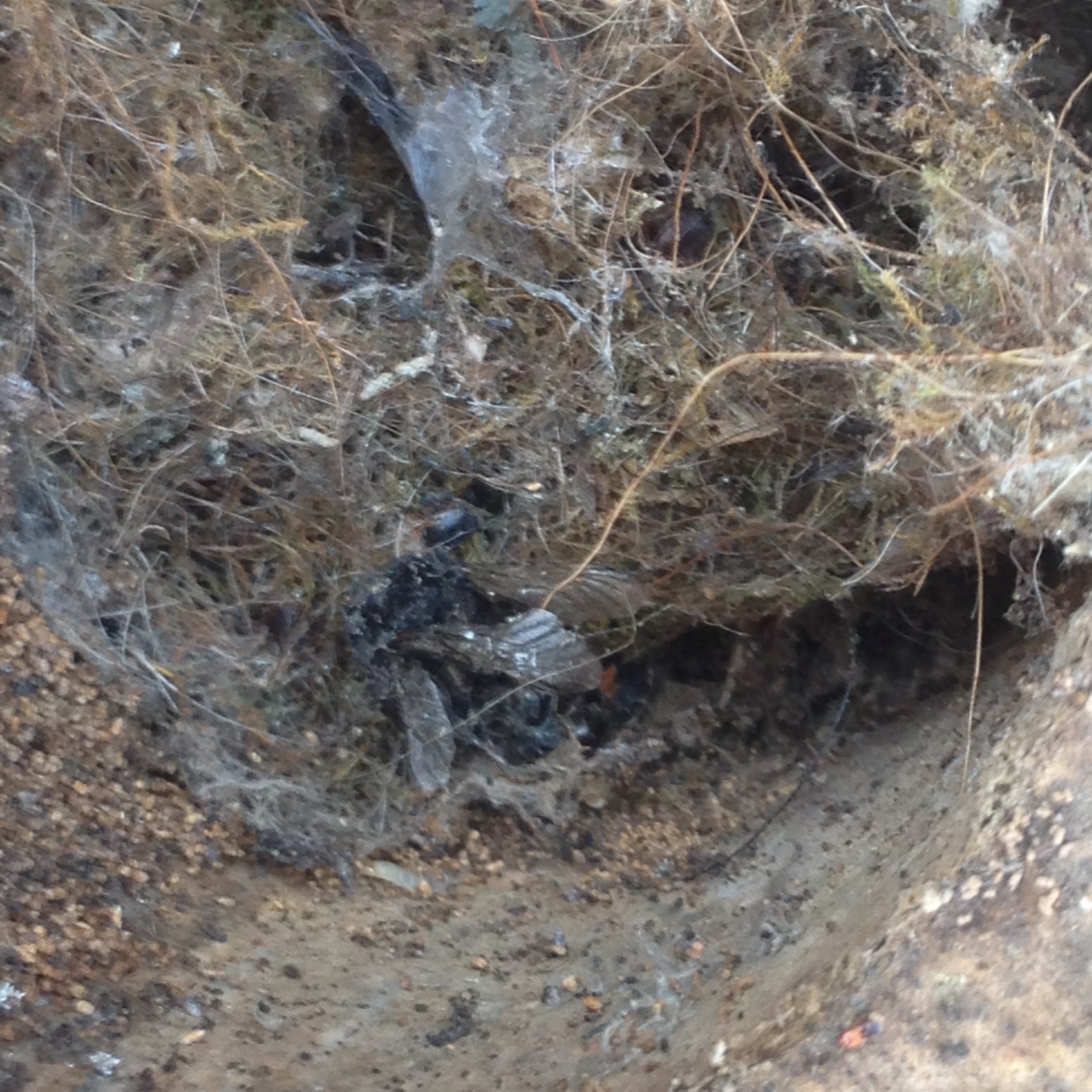 Here’s the nest once I’d removed it: 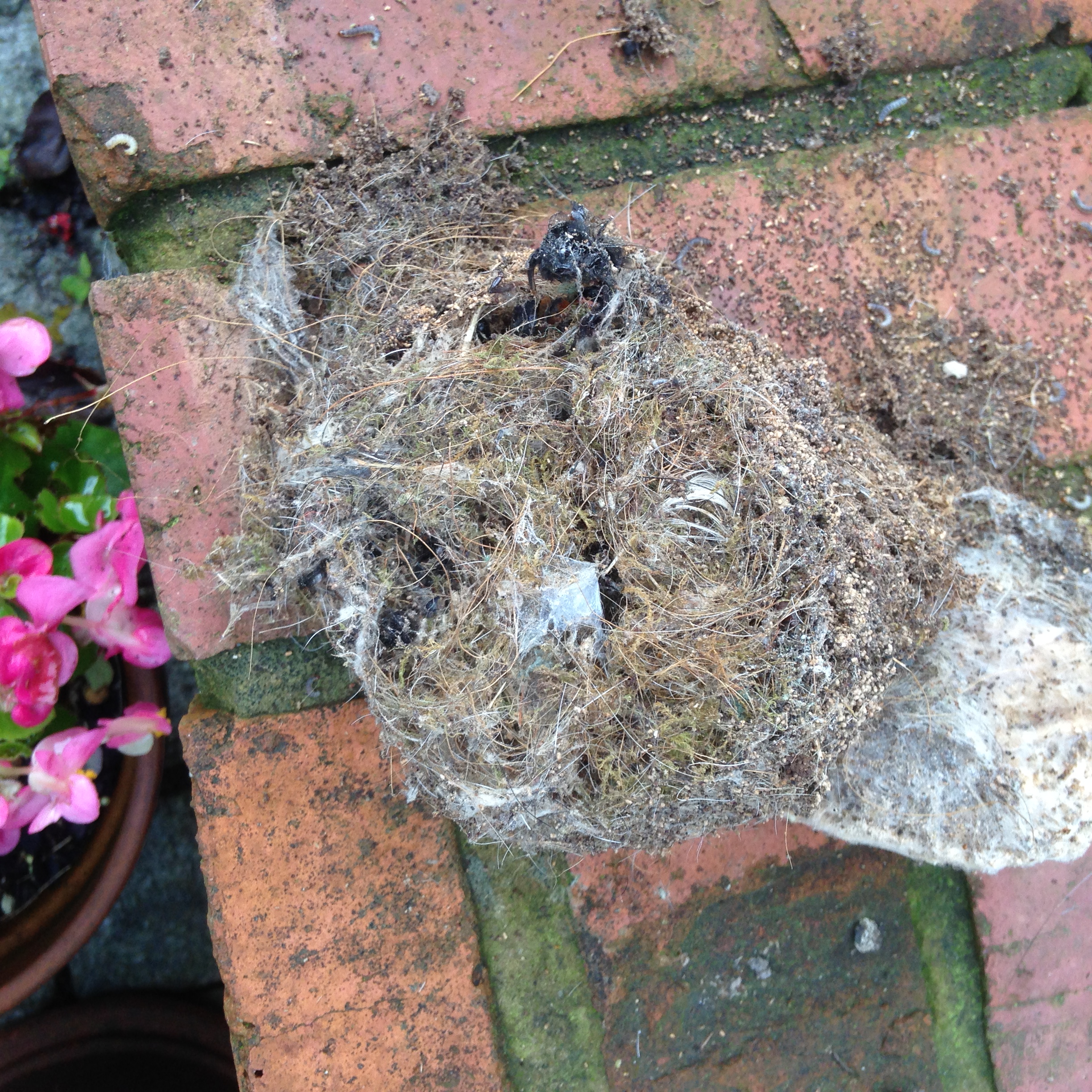 In the depths of the nest there was an unhatched egg. I broke it open (of course!) and it was just full of gloop. Either it was unfertilised, or the embryo had failed to develop beyond the gloopy stage (this is the scientific term). 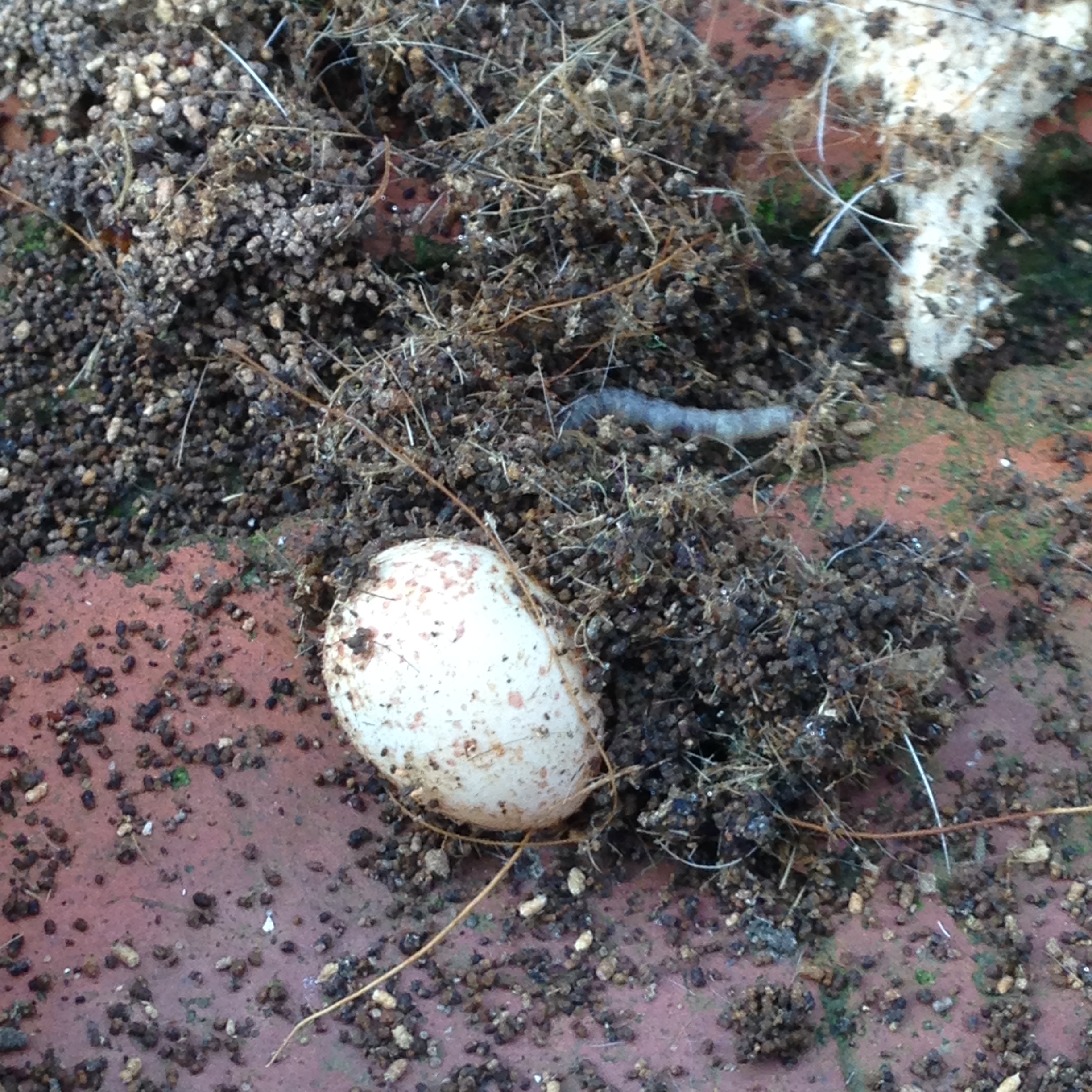 So much for the birds and the bees. The birds made a nest, then the bees took it over. But then something else happened. In fact, it was obvious as soon as I opened the lid of the box: the first thing I saw was a silky mess of cocoons and frass. These aren’t bee cocoons! If you look carefully you can see one of the creatures that made the mess, in the middle of this photo (spot the moth caterpillar!): 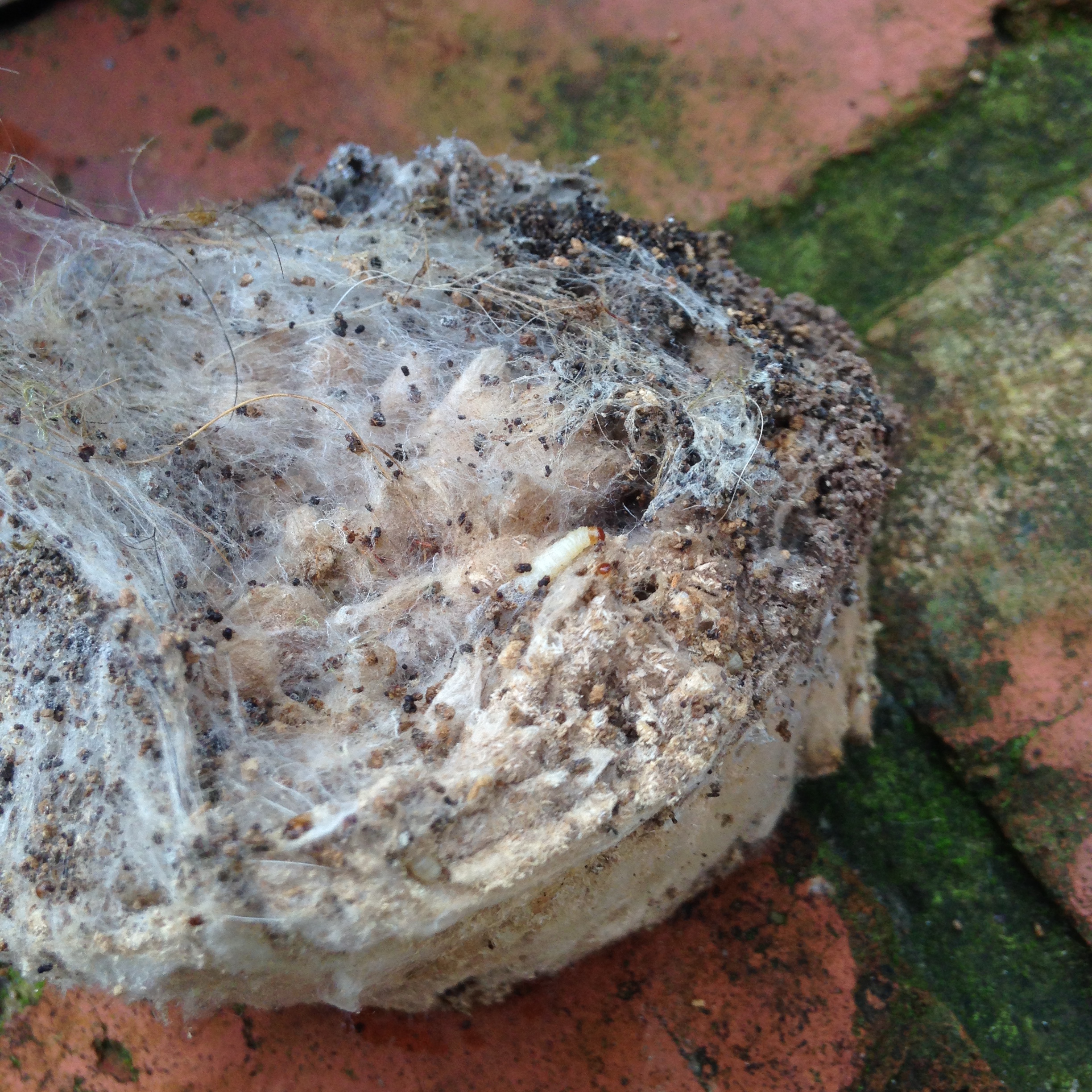 So strong were these beasts that they had actually ended up grinding out the wooden lid of the nest-box!: 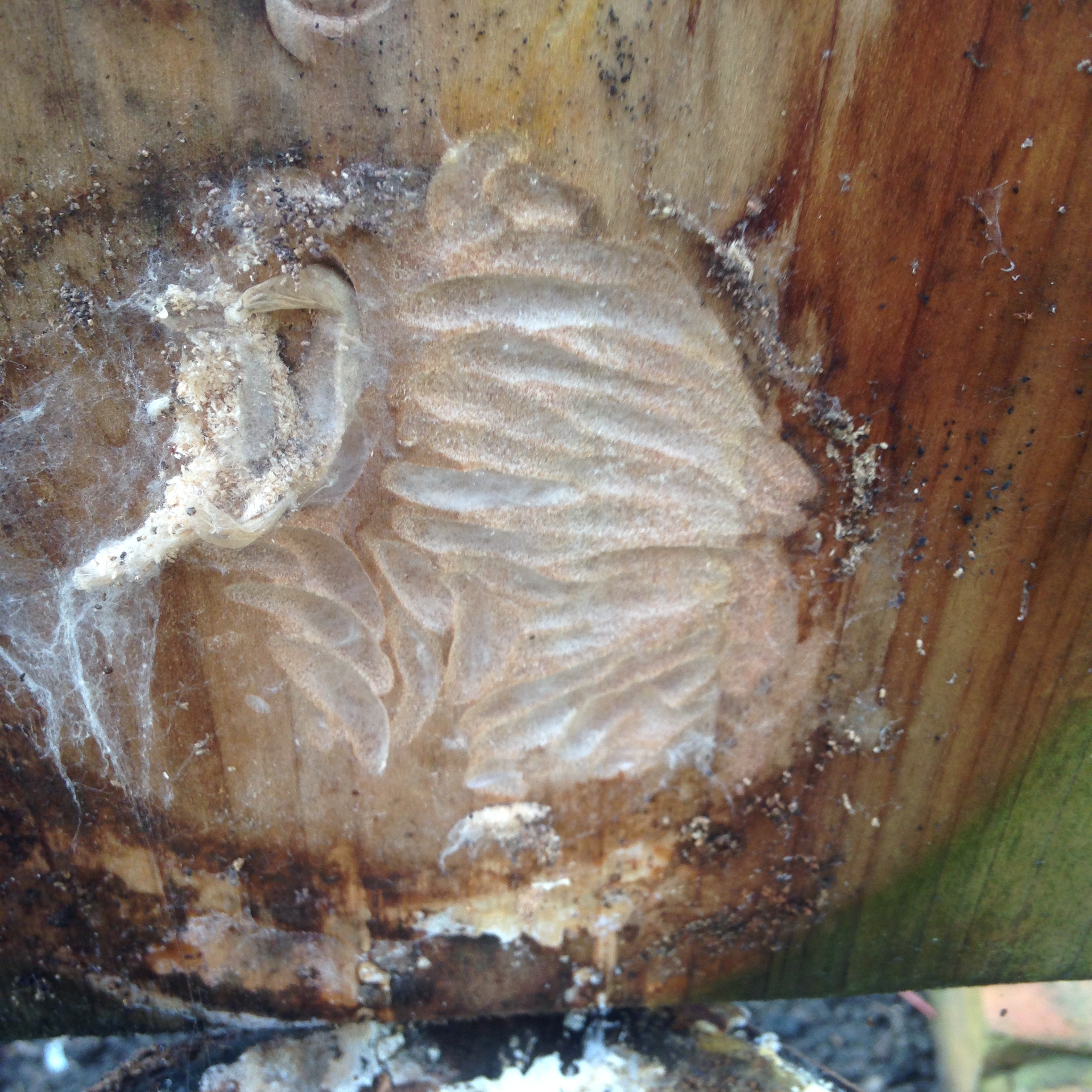 These are wax moth caterpillars, and the wax moth is one of the bumble bee’s deadliest enemies. It lays its eggs in the bee nest, and then proceeds to munch its way through the babies. There were still some immature caterpillars in the nest, which legged it as I took the thing apart – here’s one rather stupidly making for a hole in the wall that happens to be inhabited by a spider, which you can see has grabbed it by the head: 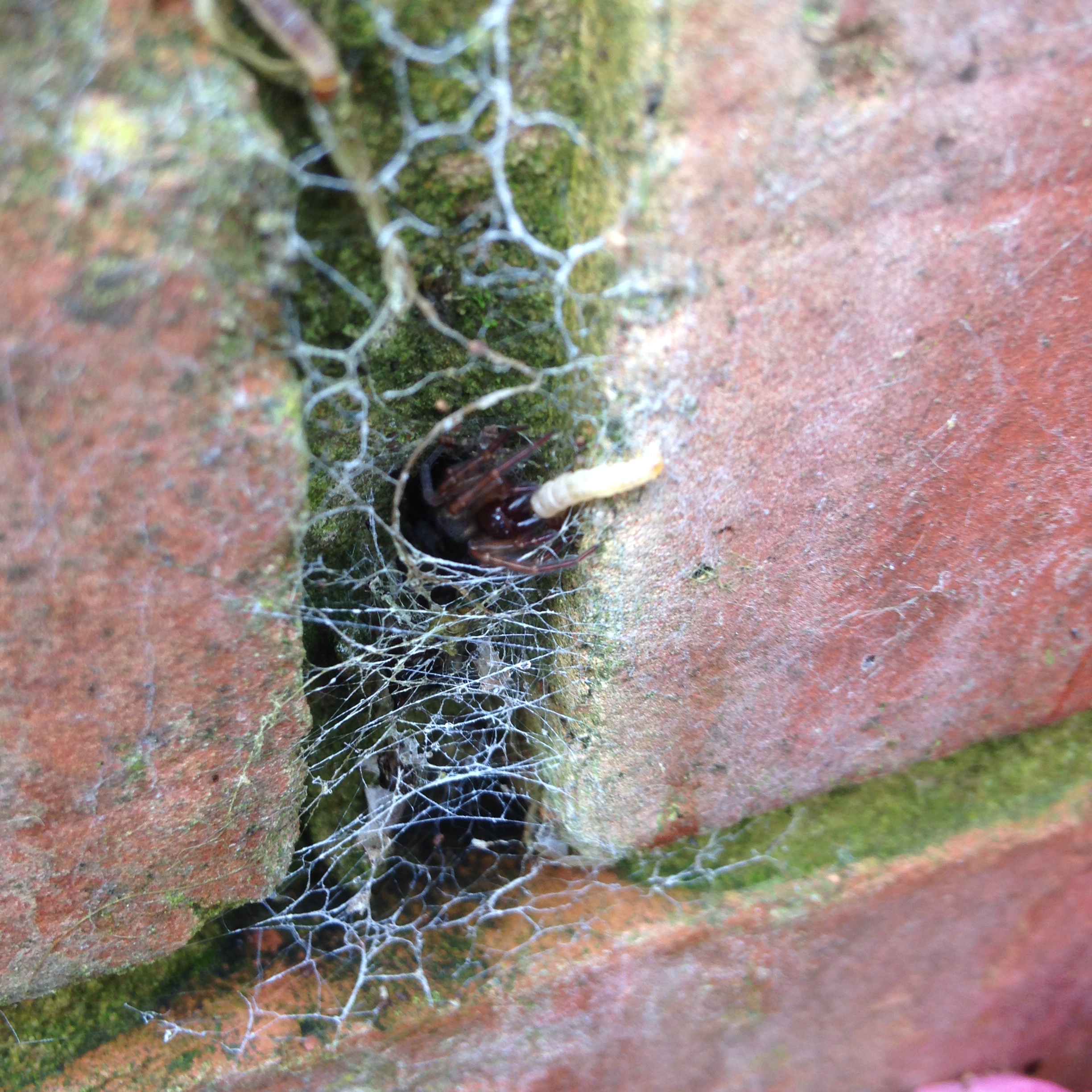 If that spider – or its offspring – are still around this spring, it may end up being nommed by the blue tits to feed their babies, and the cycle of life will be pretty much complete…

My next step was to remove all traces of bees and moths and then pour boiling water into the nest box to ensure that there were no parasites left. I then allowed it to dry for a couple of weeks before putting it back on the wall, and a couple of months later the blue tits turned up. They may in turn be followed by bees and moths, with the spider, as ever, lurking in wait…

If you want to know more about the bumble bee/wax moth business, here’s a great video. It’s in German, which I can’t understand a word of (apart from Ja, Nein, Bitte, Danke, Bier, Toilette, which are pretty much the basic words you need to know in any language). So you can watch it and learn both about bees and moths, and some German.

And if you want to know about bumble bees and their importance, read Dave Goulson’s excellent book A Sting in the Tale (his follow-up, A Buzz in the Meadow, is also brilliant).

20 thoughts on “The cycle of life: the birds and the bees and the moths and the spider”