First, let’s check on Stephen Barnard’s eagles.  He’s reported now that there are at least two chicks: he’s seen a pair and there may be more.  However, we don’t yet have a photo. But we do have a picture of parental care with Stephen’s caption:

Getting everything just right. Watch out for the kids!

I don’t know how one can observe the ubiquity of solicitous parental care across vertebrates and still deny that evolutionary psychology has anything to say about human behavior! Whether it be in eagles or humans, parental behavior can be considered a product of either individual selection or kin selection, and it’s really a whole complex of behaviors. Eagles built nests; we favor our kids over other people’s. 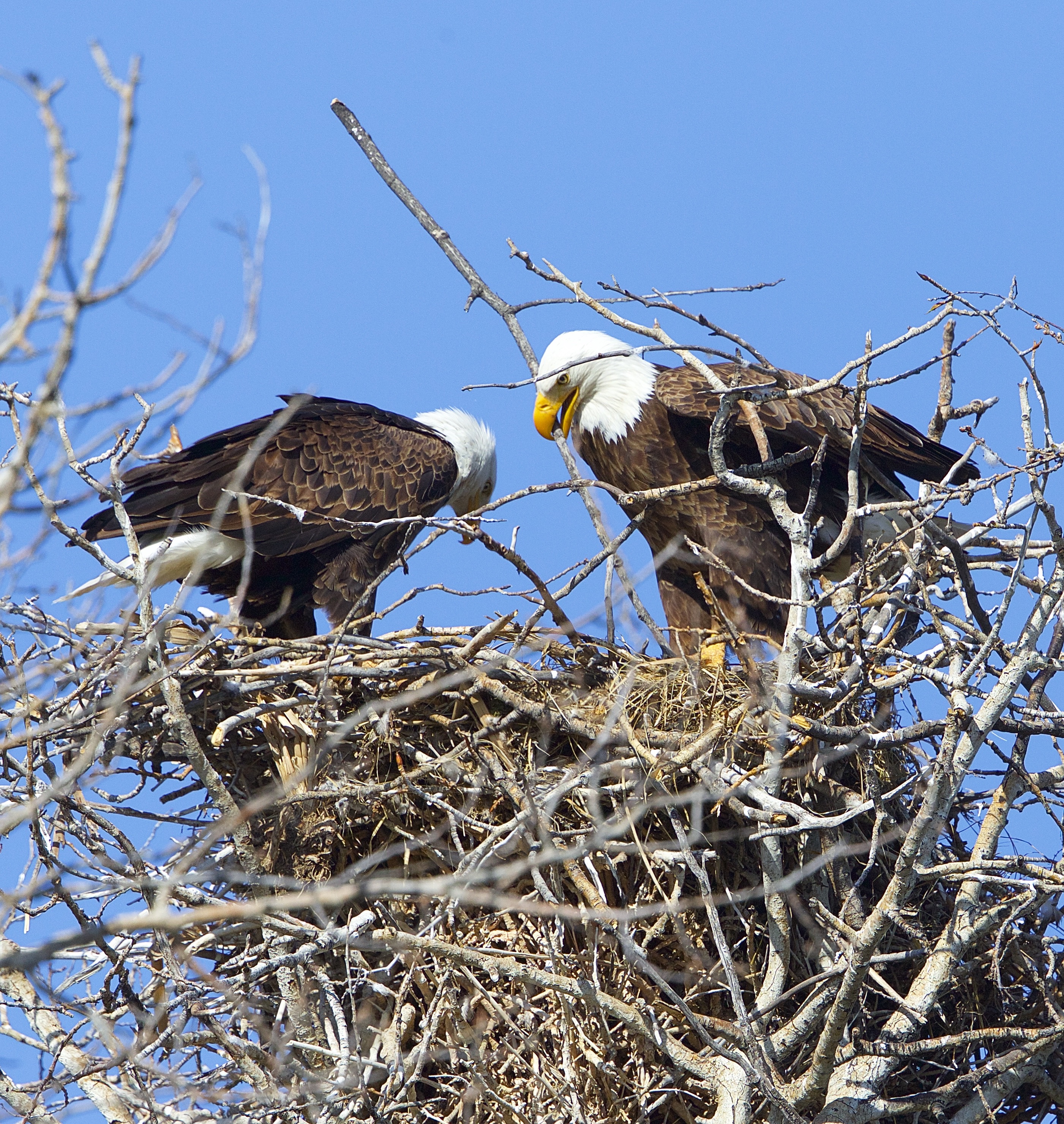 Attached a some photos my wife and I took of a cheetah hunting with her cubs one morning while we were in the Ngorogoro Conservation Area in Tanzania.
The first two photos show our initial encounter in a savanna area near a dry lake. Our guide was quite certain the cheetah mother was going to hunt because he said her belly looked empty. In the second photo she is waiting for her cubs to catch up. They were playing and dilly-dallying around and we couldn’t get all three in one frame. The giraffes are clearly interested but don’t have to worry. 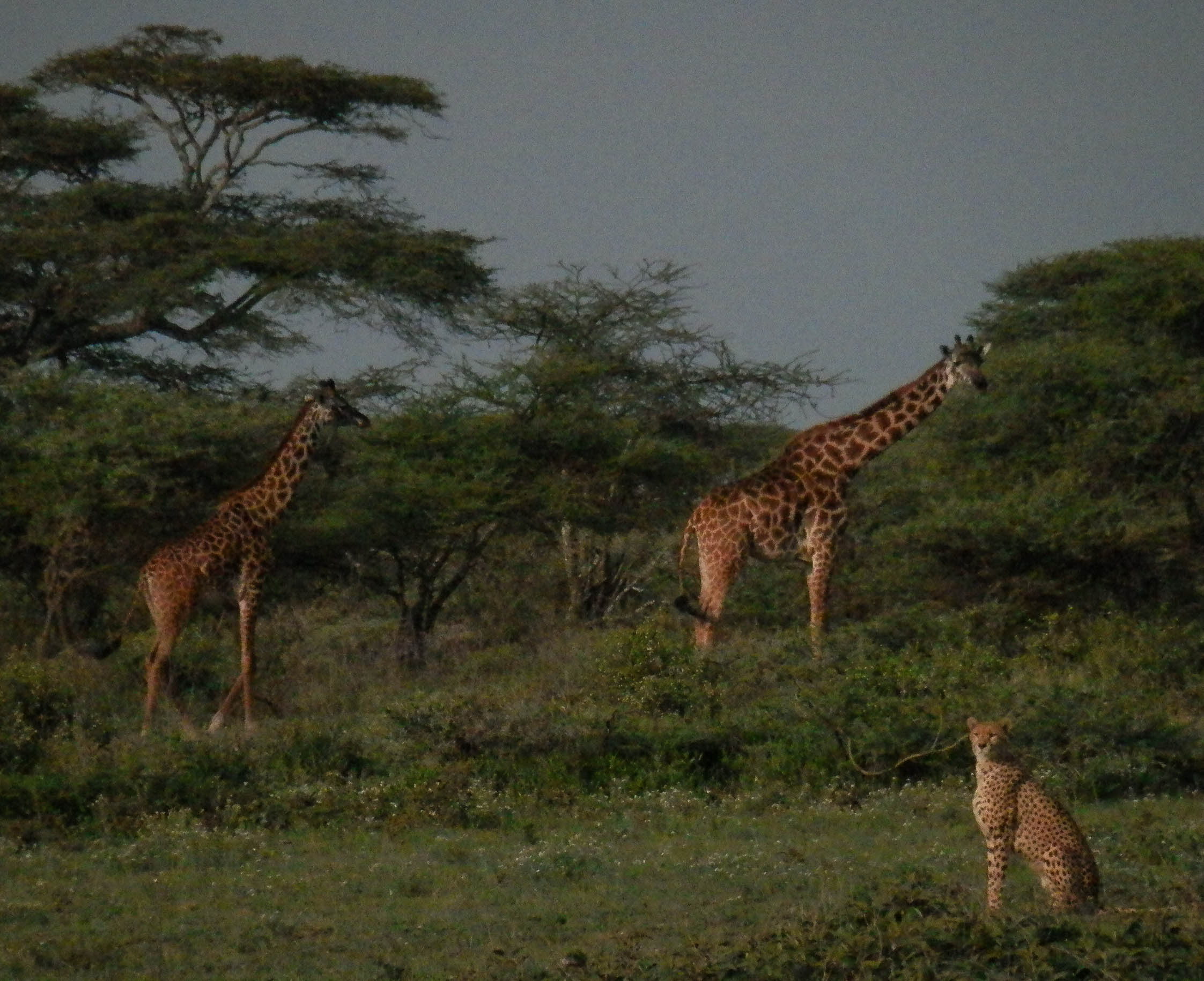 The third photo shows all three down by the edge of the dry lake. They have spotted a herd of gazelles grazing on the other side of the lake and mom spent nearly an hour patiently waiting for an opportunity. 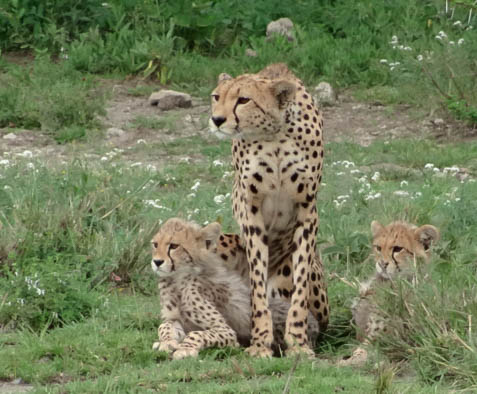 The fourth photo is not an ad for a safari company (although it is a good one). The gazelle herd has been moving toward the left as they graze. One of the gazelles is lagging behind the group and a gap is opening up. Mom has seen this and has moved up behind the vehicle to use it as cover while she waits. Her cubs have been sent into the cover of some brush to watch. 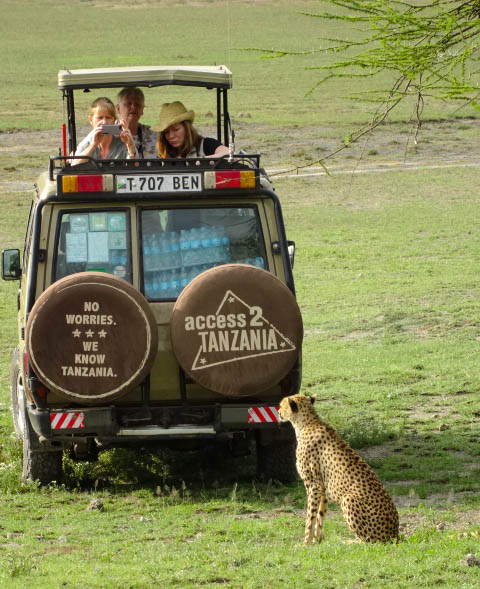 In the fifth photo mom has moved away from the vehicle and is slowly and smoothly making her way out toward the lake bed. 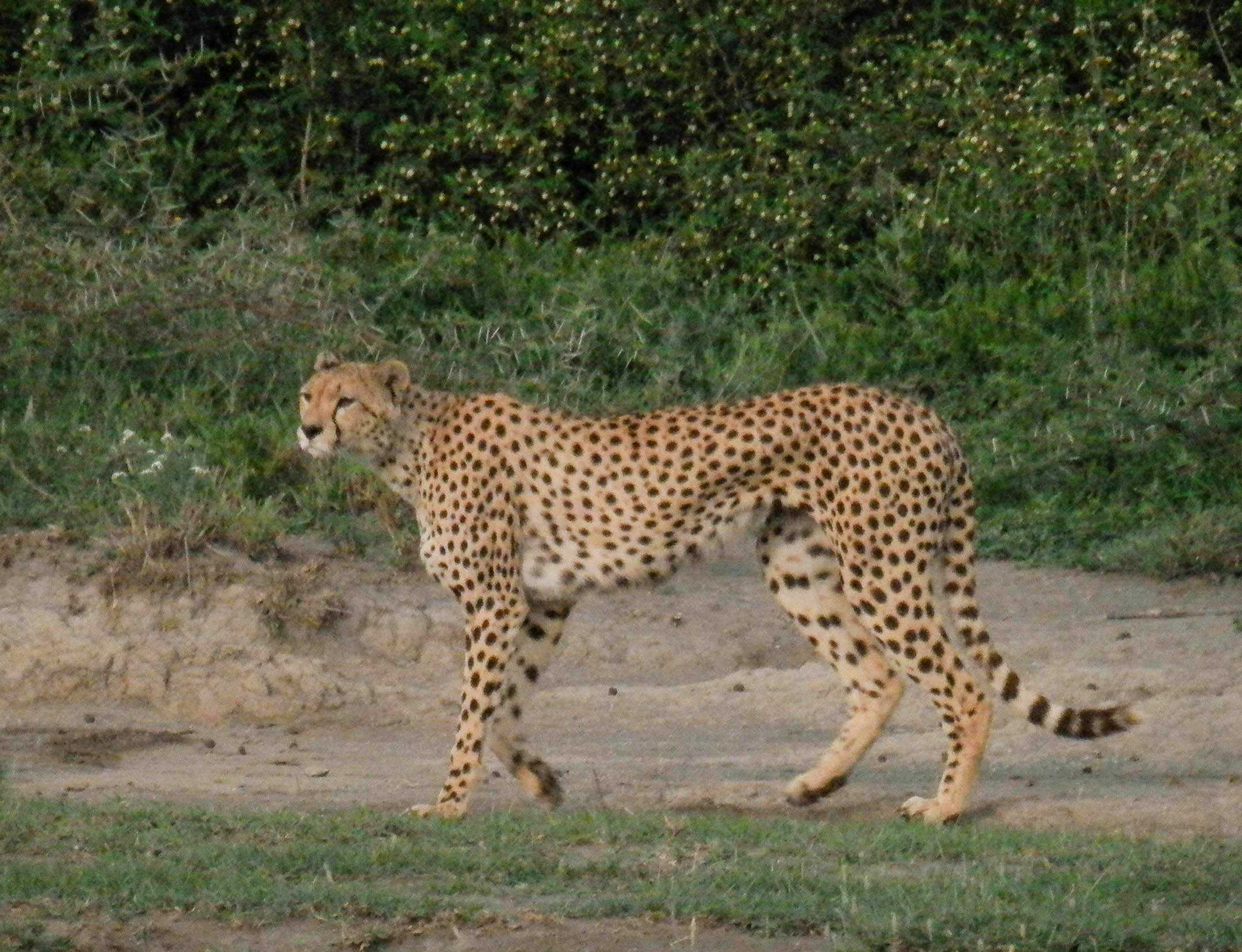 The sixth and seventh photos are stills from a video I took of the chase. It was fascinating to watch. Mom slowly accelerated from a walk to a trot to a run toward the gap between the gazelles until the straggler made the fatal error of bolting to the right instead of toward the herd. The gazelle was now isolated and the cheetah lit the after chargers, turned on a dime and made the kill. The seventh photo shows the trail of dust and the doomed gazelle. 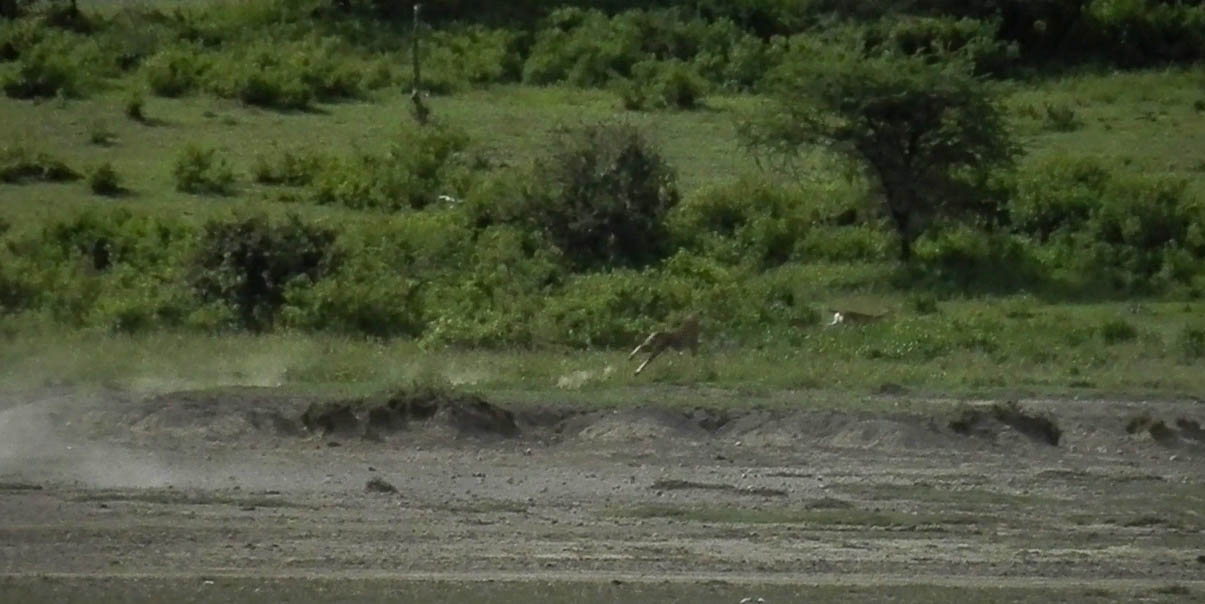 The eight and ninth photos show the result. It all happened very quickly after the patient wait for opportunity. We expected that this sort of thing might be gruesome to watch, but it was actually quite fascinating, exciting and just the way things work. We were definitely cheering for the cheetah. 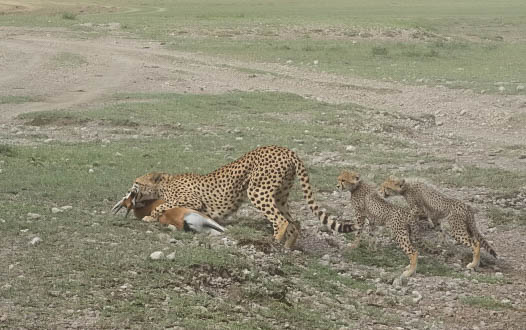 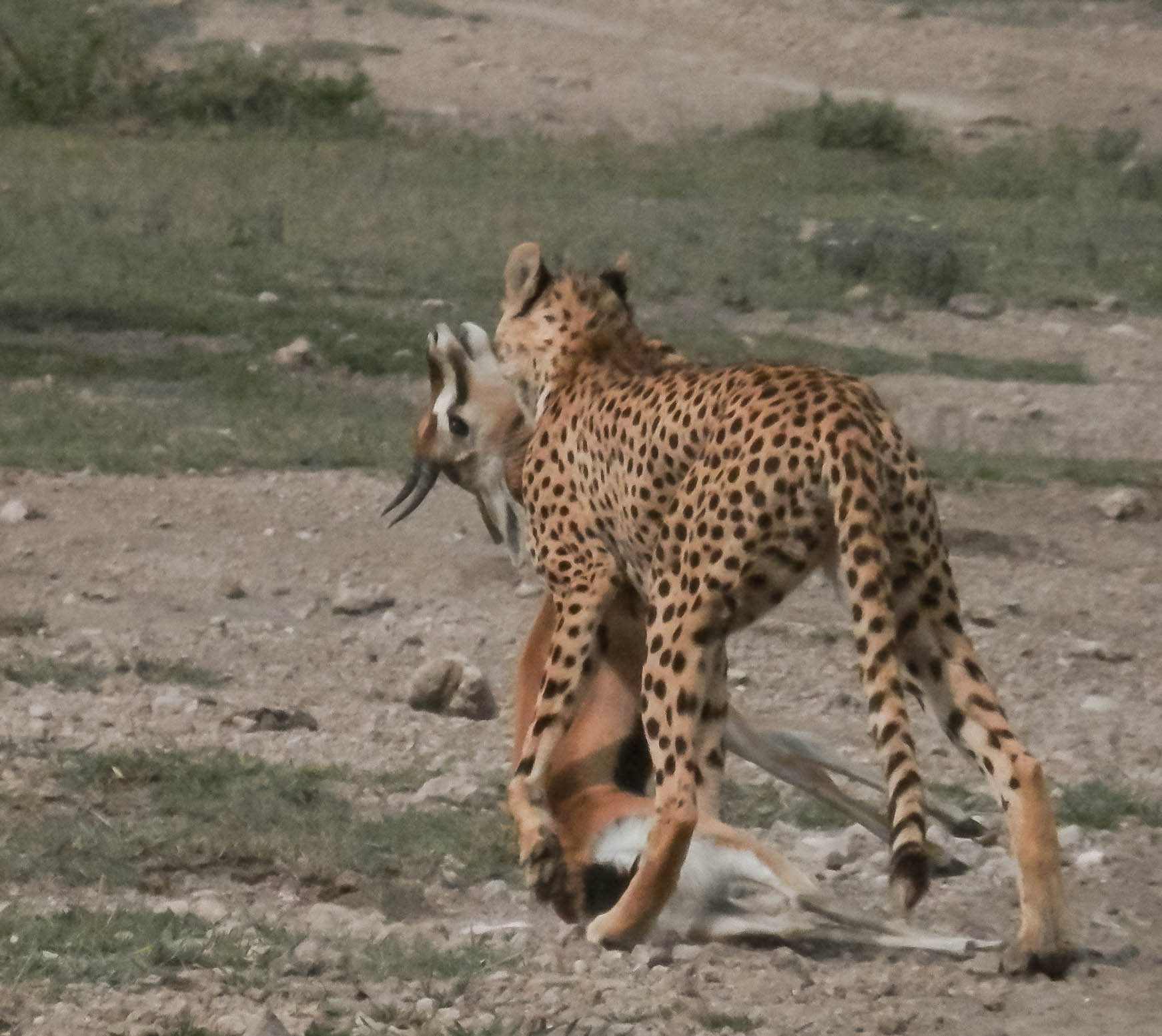 The last photo is another still from a video and is a bit fuzzy. After the kill mom hauled the gazelle into the shelter of a bush, proceeded to open its belly and let the cubs go at it.  She laid down in the shade and ignored them. 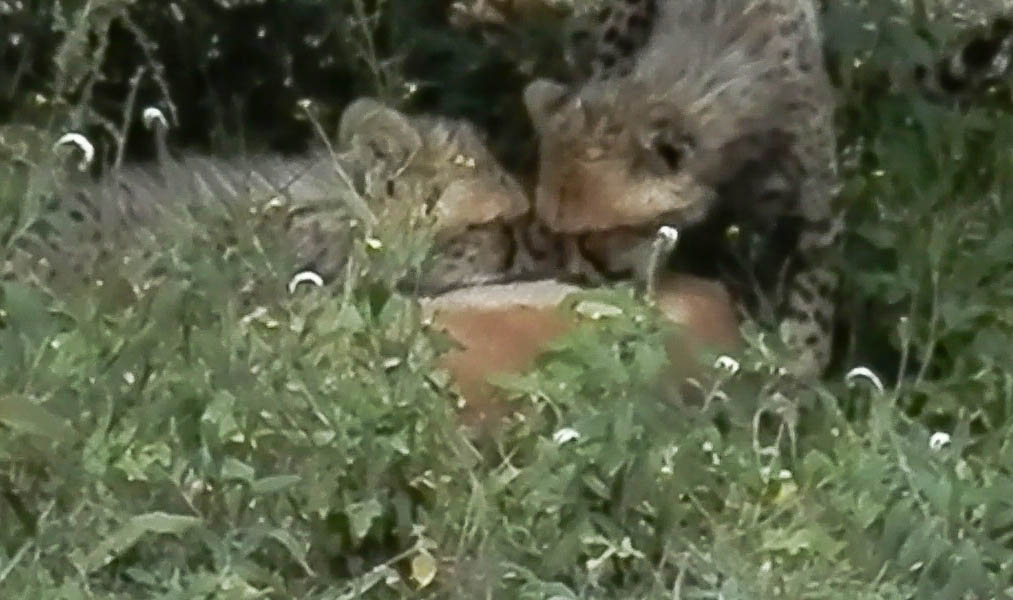 Finally, moving to colder climes, here are two photos of arctic foxes (Vulpes lagopus) from my FB friend Ivan Kislov, who takes amazing animal photos from Siberia. (Ask to be friends; you’ll see unforgettable photos.) Ivan’s a miner who does nature photography in his spare time; see my earlier post about his work here.
His caption is this: 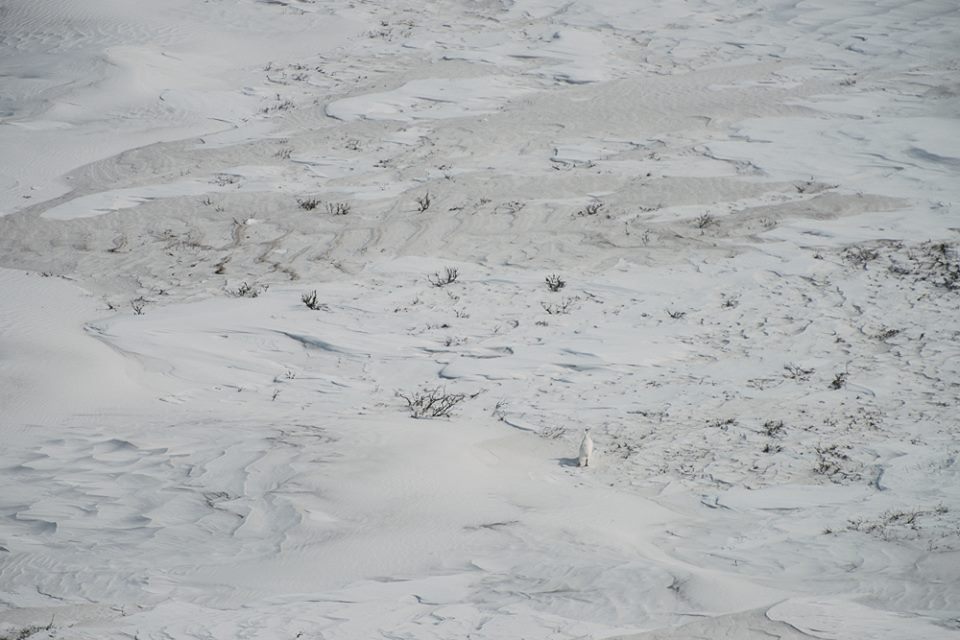 Notice the short ears that to conserve heat; and compare to, say, the ears of desert foxes like the kit fox or fennec, which function as head radiators. 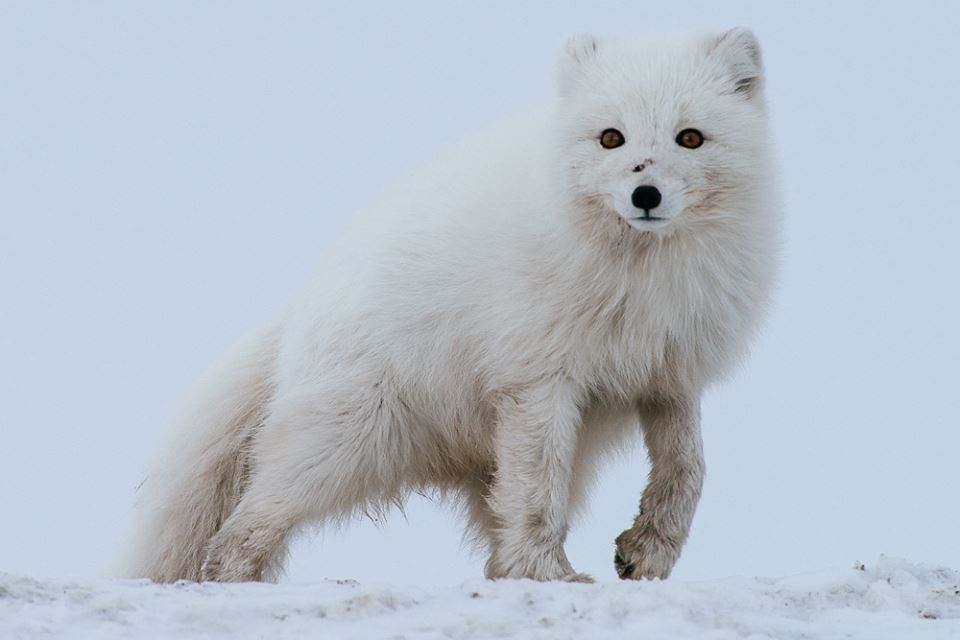