Every day I must receive at least fifteen items about cats from readers: photos, articles, websites, and so on (the most recent was a spate of emails about baby bobcats, who are über-cute). But were I to post all of them, this would turn into a cat website and I would be inundated with people telling me to knock it off. (By the way, don’t be one of those people.)

But today there were two cat-related items in the mail that I want to post anyway.

The first is a link, sent by reader Macro Phyte, to the tale of a finicky Irish cat named Jerry. The true story by Frank McNally, “What’s new, fussy cat? An Irishman’s Diary on Jerry, the fussy feline,” was published yesterday in the Irish Times. It’s a short but lovely account of an old cat who refuses to drink tap water, preferring rainwater or, better yet, bottled mineral water. First, here’s the curmudgeonly old moggie:

And here’s the beginning of McNally’s story:

One of the side-effects of the current dry spell is that I’ve had to start buying mineral water for our ancient cat, Jerry. Being a reluctant cat owner, I consider this just the latest in a series of new lows to which he has reduced me over the years. But the problem is this – the old fusspot absolutely refuses to drink tap-water.

He instead depends on the sky to supply his needs. And this is normally a reliable source in Ireland, where the leftovers of the last shower have rarely evaporated before the next one arrives.

But over the past 10 days or so, Jerry has exhausted all his reserves – starting with the puddles; then the various containers in the back garden; then the crevices in half-full refuse sacks, and so on; until there was nothing left.

Time was I could trick him on occasion by topping some of these up from the kitchen sink when he wasn’t looking.

Or if that didn’t work, my attitude to his subsequent bouts of self-imposed dehydration was that, sooner or later, one of two things would happen – either it would rain again, or the cat would lower his standards.

But I came home of an evening recently to find that he had sought asylum with a new neighbour – a kindly Portuguese lady who had poured Volvic (non-sparkling) into a bowl. Did I know who owned him, she asked, as he lapped it up like a camel that had crossed the Sahara since his last drink: “He looked a bit . . . unhappy”.

. . . And so it has come to pass. Next time it rains, I’ll have buckets under the drainpipes. In the interim, I’m buying him mineral water: Supervalu own-brand, until he decides that’s not good enough either.

There’s a familiar pattern here vis-a-vis the cat’s ever-increasing needs – first puzzlement on my part, then resistance, then capitulation. After years of trial and error, for example, a while ago I finally discovered a brand of food he will almost always eat. It’s some sort of taste-enhanced stuff, made in France for “chats difficiles”.

So now every couple of months I have to cycle to a pet shop in Crumlin and haul back a 12-kilo bag over the handlebars.

“See this?” I told Jerry the first time, pointing at the “chats difficiles” and translating. “It means you’re a fussy c**t”, I said, “if you’ll pardon my French”.

It continues, and is worth a read, especially if you have a chat difficile. Macro Phyte adds, “Give the comments section a miss, some of them are just pointlessly anti-cat.”

And reader Grania sent a short tw**t with a great picture from the great Twi**er website Why my cat is sad: 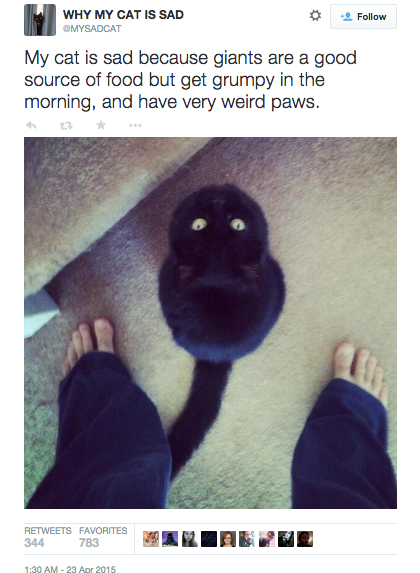 (Go here if you want to learn Irish words relating to cats.)