We’ve often highlighted here at WEIT the remarkable phenomena associated with mimicry, the often marvelously detailed resemblance of organic beings to other organic or inorganic features of their environment. On a trip to Costa Rica in January, while out for a nightwalk at La Selva Biological Station with Jon Losos, we came across a hooded mantis, probably in the genus Choeradodis, on a broad leaf. Many kinds of insects resemble leaves, having what Hugh Cott called a “special resemblance to particular objects”. The thorax is broad, flat, and the same color as the leaf, while the folded wings are leaf-shaped and have what looks like venation. The opened wings can also look leaf-like (browse the images here). There are even some mantises which mimic dead leaves. What struck me about this mantis, though, was that the insect also had a blemish on its thorax, looking very much like the blemishes on the leaves.

Can you tell which of the following is on the mantis, and which on the leaf? You probably can figure it out by using cues of lighting and haphazard details in this particular image, but not by any in principle distinctions. 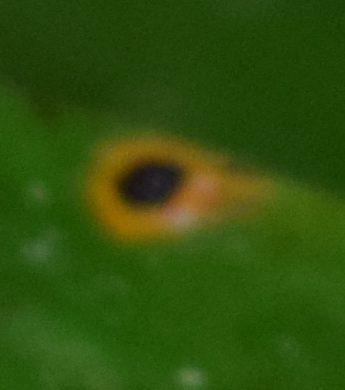 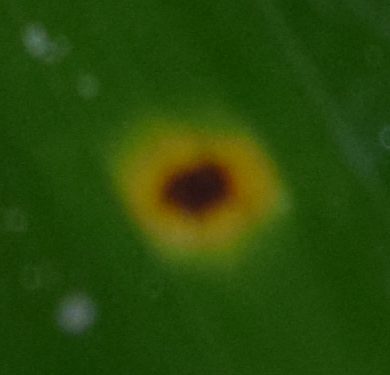 What is remarkable about this is not just the resemblance, but the asymmetry of the blemish on the mantis, indicating that its position is unlikely to be a constant pattern feature. I do not know what causes the leaf blemishes– a fungus? insect damage? Could the blemish on the mantis also be an induced pattern element of some kind, but in this case one that enhances the mimetic resemblance, and breaks the symmetry of the insect?

I could not find any reference to asymmetric mimicry of blemishes in a quick perusal of classic references, or the internet. Are there any tropical biologists, entomologists, or plant pathologists out there who can perhaps enlighten us?

[JAC: There was some discussion this morning about why so many mammals have light bellies. Greg answered in the comments, but I’d also direct you to this article on countershading (yes, it’s from Wikipedia, but it’s the best I could find). Greg happens to be our resident expert on animal coloration, and decided to add a short post based on a picture he saw in the local paper.]

As the picture below shows, countershading doesn’t always work– sometimes the hawk does spot the chipmunk.

I saw this just today in my local paper. As was discussed in the comments on the latest set of readers’ wildlife photos, chipmunks being dark above and light below gives them a “flattened” aspect and makes them harder to see, but no protective coloration is perfect. There have been years when hawks nested in trees on my block quite close to my house, and mangled chipmunk remains would appear frequently below the nest. This year, I haven’t seen any hawks near the house, and chipmunks seem more common than usual.

Ground nesting birds are more vulnerable to predation of both themselves and their eggs because the ground is accessible to a larger variety of predators than are nests built in trees. There are a number of ways of dealing with this. One is for the bird, its eggs, or both, to have concealing coloration. This is very common, and such cases constitute a large class of examples in the classic work establishing the principles of adaptive coloration.

I saw this myself recently during a stop in New Madrid, Missouri, where I heard a bird yelling in my ear. But it took some time to find the bird.

Eventually I did spot it (I had binoculars), sitting on the ground. A second killdeer was running about on the grass not far away.

As I approached, it did not attempt to lead me away in a distraction display (which killdeer will do), but once I was close enough it stood up and displayed its more strikingly marked tail feathers, although not as vigorously as did one photographed by a WEIT reader earlier this summer.

According to the Cornell Laboratory of Ornithology, which of the two possible displays is used—distraction (which leads the interloper away from the nest), or tail (which alerts the interloper to the location of the nest)—depends on the nature of the interloper. If perceived as a predator, the distraction display is used to lead the predator away; but if perceived as a blundering ungulate (bison in the old days), the tail display is used to make an annoying spot on the ground that the ungulate will walk around (rather than on top of). So, she perceived me as a lumbering, dumb, brute, rather than an egg predator; clever girl!

There were two eggs, both camouflaged with dapples and spots, and no apparent nesting materials, but I didn’t want to bother her enough to move her off the nest to get pictures of the eggs.

Another common way of dealing with the problems of a ground nest is to use a less accessible piece of ground, such as an island or a cliff, as the nesting site. Seabirds frequently do one or both of these. In my part of Wisconsin, Canada geese have become cliff nesters over the past twenty years, building their nests on ledges and roofs of buildings, a behavioral change that has resulted in a huge increase in nesting success and nest abundance. It would be interesting to determine how much of this new nesting behavior is an evolved adaptation or part of a learned repertoire.

The two great classes of phenomena that Darwin set out to explain were those of adaptation– the fit between an organism’s features (structure, behavior, etc.) and its conditions of existence; and unity of type — the similarities of basic structure among organisms in diverse conditions of existence (e.g., the one bone-two bones-many bones pattern of tetrapod forelimbs, whether they be burrowers, swimmers, climbers, runners, etc.). The unified explanation that Darwin provided for these phenomena was descent with modification: the similarities were due to inheritance from a common ancestor (i.e. descent), while adaptation arose from the process of modification (i.e. natural selection).

The methods of studying adaptation are thus crucial for biology.  How can we tell what (if anything) the spots of the baby tapir are adaptive for?

There are three basic ways of studying adaptation, in the sense of determining what a trait is an adaptation to. The first is engineering: does the feature conform to what we would expect if it is performing some adaptive function?  Study of hydrodynamics enables us to understand the shapes of the bodies, flippers, and fins in fish, dolphins, icthyosaurs, etc. as adaptations to movement within a fluid environment.  The dorsal fin of an ichthyosaur, for example, stabilizes the reptile in its forward movement through water, preventing unwanted roll (for recent discussions of ichthyosaur aquatic adaptations, see here, here, and here). For another example of the engineering approach, see Richard Dawkins’ delightful account of bat sonar in chap. 2 of The Blind Watchmaker.

Second, there is the method of correlation (also called the comparative method): does the feature evolve repeatedly in particular environmental circumstances? Thus even if we were wholly ignorant of hydrodynamics, the repeated evolution of dorsal fins in aquatic fish, reptiles, and mammals provides evidence that dorsal fins are adaptations to an aquatic existence.

Third, we can study the effects on survival and reproduction of variations in the trait of interest.  This can be done either by altering the features of the character experimentally (as in this neat experiment on sexual selection in widowbirds) or by studying naturally occurring variants (as was done with peppered moths by  H.B.D. Kettlewell).

The evidence for the adaptiveness of spotting/striping in mammals is primarily of the first sort (Hugh B. Cott, in his classic Adaptive Coloration in Animals, has a lot about optical principles, and what makes things hard to see), the second sort (pacas, bongos, deer, tapirs all have spots and/or stripes [and note that pacas are rodents, and that tapirs, which are perissodactyls, are not at all closely related to the artiodactyl deer and bongo, so it would be hard to argue it’s a retained ancestral feature]), and very little of the third sort– no one’s painted baby tapirs’ spots over to see what happens to them (at least as far as I know). I’ll touch on all three sorts as they relate to tapirs in later posts.

(For other examples of camouflage, see Matthew Cobb’s earlier post on the subject.)

Hello everyone, Jerry has kindly (or foolishly) handed over the reins of the WEIT blog to me for the next 10 days or so. See if you can spot the difference!

Innes describes various cases of how camouflage works in different animal species, and there are some great pictures to go with it. Sometimes, changing color is not actually to do with camouflage – this is the case in chameleons, and  also in octopuses and squid, which can use rapidly changing patterns of skin color to communicate in ways we do not fully understand. And by ‘ways’ I mean both what they are communicating and how they change their color so quickly.

One of the most spectacular examples of cryptic camouflage can be seen in the octopus, in this video:

This is taken (without credit!) from a fantastic five-minute talk on underwater animals by David Gallo at Ted.com, which you can find here and which includes some great interactions between squid at around 2m 40s and some cuttlefish showing fantastic rapidly changing color patterns.

One example of camouflage given by Innes Cuthill is the zebra, which he suggests may have stripes because it disrupts their outline, making it more difficult for predators to decide where the zebra begins and ends. This may be true – but in reality we simply do not know what the adaptive advantage is. Indeed, it is possible that the stripes have nothing to do with what is really going on (they may be simply a side-effect of the true advantage), although that seems unlikely. A non-camouflage explanation is that zebra foals are born into a world of stripes, and that the stripes on their parents help to enable them to identify their fellow-zebras, and reinforce their herd identity.

The problem with all these explanations is that they are what the late Stephen Jay Gould called ‘Just So Stories’, after the children’s fables written by the British author Rudyard Kipling (‘How the elephant got his trunk’, and so on). They fit the facts, and they may be true, but they lack the decisive support that science alone can provide: experimental evidence.

In discussing this with Jerry last week, he pointed out that a simple test of the ‘disruption’ hypothesis to explain the zebra’s stripes would be to paint some all black or all white, and see what happens to the predation rate. I suspect that would not be possible, either ethically or practically, but some kind of experiments on zebras, lions, or both, will be required before we can be really sure why zebras have stripes. Post your explanations – and above all, think of a doable experiment that could test your hypothesis!