Here’s a thread of artwork showing cats destroying stuff through history. Cats have been cats ever since they were domesticated—or rather, domesticated themselves—about 10,000 years ago. A few tweets from the thread:

Here is a thread of cats destroying our stuff throughout history, because they've always done it and they always will and for some reason we will keep loving them for it.

Here’s a chess-playing bot cat that’s the subject of a Wall Street Journal article, complete with a video. Click on the screenshot to read: 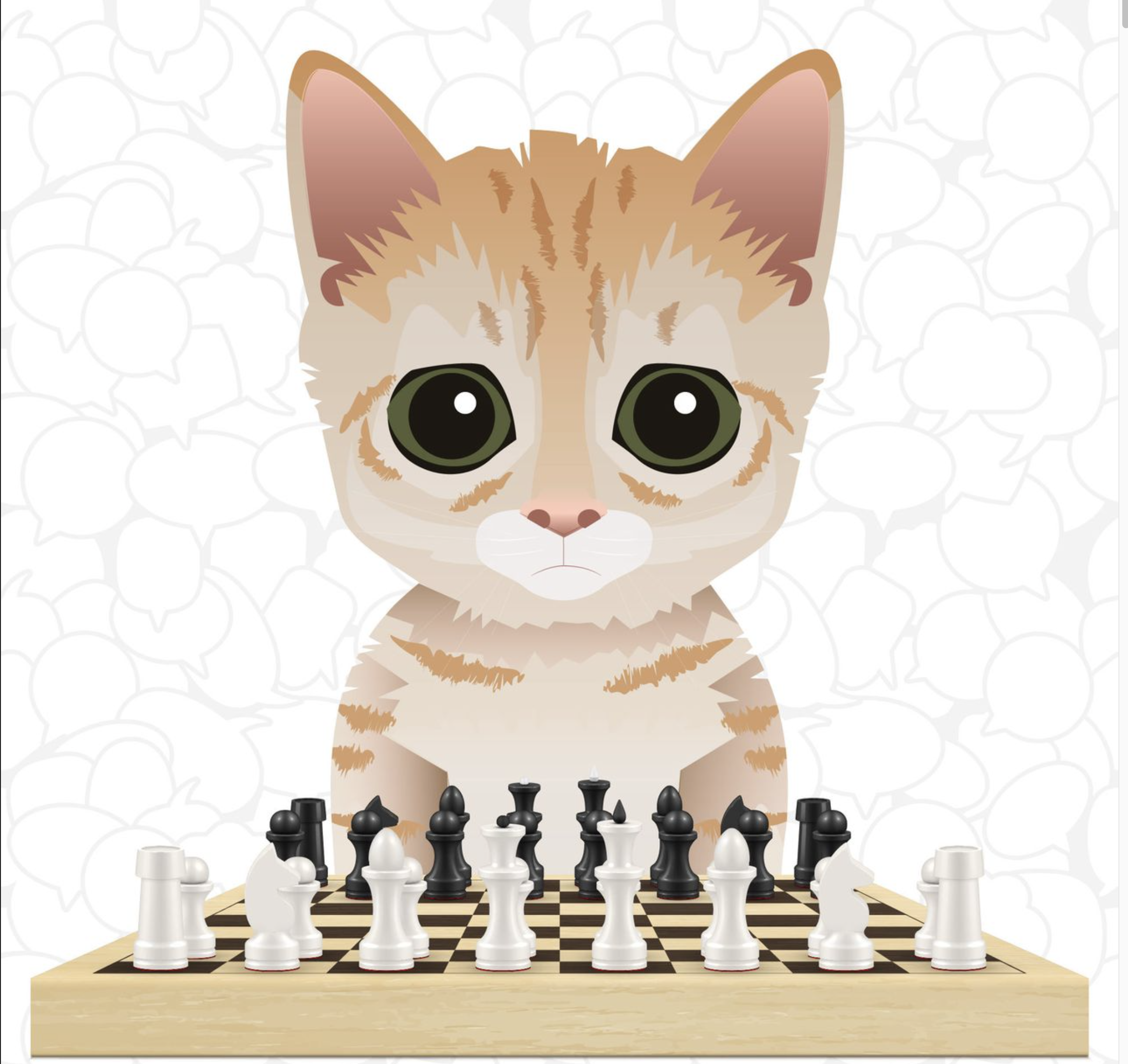 The heels of the chess world have included Soviet grandmasters, alleged cheaters, and faceless supercomputers. But the game’s latest villain is a fearsome genius who quotes French cinema and has played millions of games in just a couple of weeks.

She also happens to be a mean cat.

Mittens—or technically the chess bot known as Mittens—might look cute. Her listed chess rating of a single point seems innocuous. But her play over the past few weeks, which has bedeviled regular pawn-pushers, grandmasters, and champions who could play for the world title, is downright terrifying. And as it turns out, people are gluttons for punishment.

Since Chess.com introduced this bot with the avatar of a cuddly, big-eyed kitten on Jan. 1, the obsession with playing her has been astonishing. Mittens has crashed the website through its sheer popularity and helped drive more people to play chess than even “The Queen’s Gambit.” Chess.com has averaged 27.5 million games played per day in January and is on track for more than 850 million games this month—40% more than any month in the company’s history. A video that American grandmaster Hikaru Nakamura posted to YouTube titled “Mittens The Chess Bot Will Make You Quit Chess” has already racked up more than three million views.

When you play Mittens, she is arrogant and sarcastic, as a cat would be. Here’s a screenshot after a move from the video below.

None of those moments have driven people to virtual chess boards quite like a cat named Mittens who likes to taunt her opponents while she destroys them.

“I am inevitable. I am forever. Meow. Hehehehe,” Mittens tells her opponents in the chat function of games.

And the 22-minute video showing a game:

More about the nefarious catbot:

This particular bot was the brainchild of a Hamilton College student named Will Whalen who moonlights as a creative strategy lead. He had a crazy idea. What if they put an incredibly strong bot behind some devastatingly cute eyes?

“Then Mittens was born,” Whalen says.

But Mittens didn’t become a brutal troll until a Chess.com writer named Sean Becker led a team that developed Mittens’s personality to become the evil genius tormenting chess players everywhere. Part of why Mittens has become such a notorious villain is because she acts like one.

Even her approach to the game is menacing. Mittens is designed to be skillful enough to beat the best chess players on the planet but uses particularly grueling tactics. Becker thought it would be “way more demoralizing and funny” if, instead of simply smashing opponents, Mittens grinded down opponents through painstaking positional battles, similar to the tactics Russian grandmaster Anatoly Karpov used to become world champion.

Try your hand! If you’re a chess aficionado, can you beat Mittens?

Here’s a video of moggy getting foiled by the childproof lock on the microwave. But why does the cat want in so badly? The answer is below. You know that the cat eventually would have dragged the microwave off the edge had the filmer not been there to stop him.

“Bentley is a 4-year-old Himalayan who we worked with a local rescue to rescue from the streets. Through Facebook, we confirmed he has no owner so we stepped in, after already having 4 cats we thought, ‘What’s one more?’ Bentley is the sweetest cat but has a strong affinity for finding food, probably due to his time surviving outside. He once got pizza out of our microwave and that is when we learned he could open it. We didn’t want to have to buy a new one since we just got that one, so we put a child lock on it. Needless to say, he wasn’t happy about that and was determined to get the microwave open”

Lagniappe: The U.S. Army Corps of Engineers, showing a sense of humor, published a 2023 cat calendar. The pdf is free to download, so you don’t have to pay for it.

The US Army Corps of Engineers’s Portland District published its annual calendar with striking photos of big projects across the region… enhanced with giant cats. Download the PDF here.

“Engineering is not that exciting,” public affairs specialist Chris Gaylord told Today.com. “We all believe that what we do is very important, and that’s the reason we don’t take our social media so seriously.”

Great attitude although I, for one, find massive dams, monstrous construction equipment, and huge ships to be quite exciting.

Here are a few months. 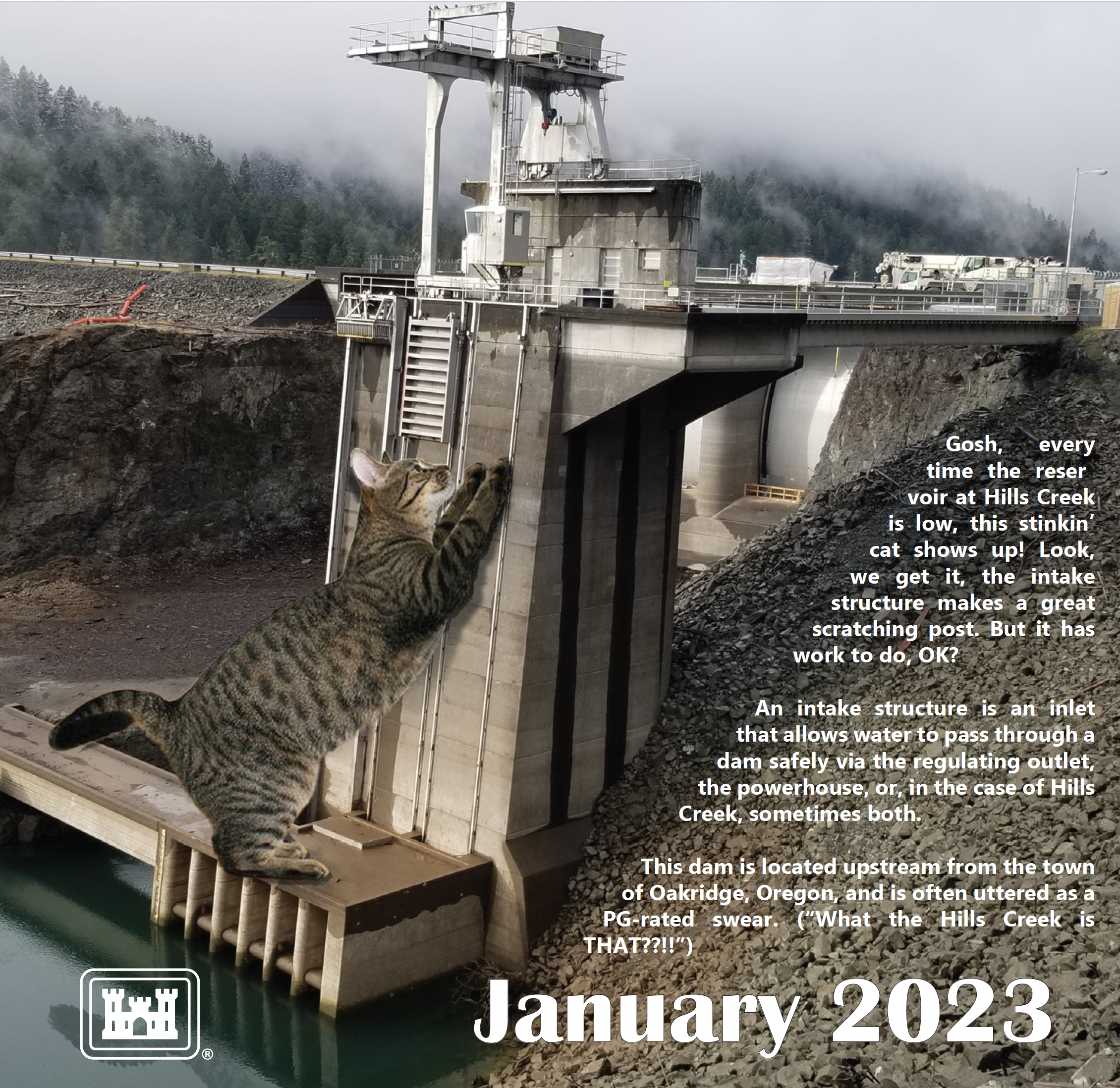 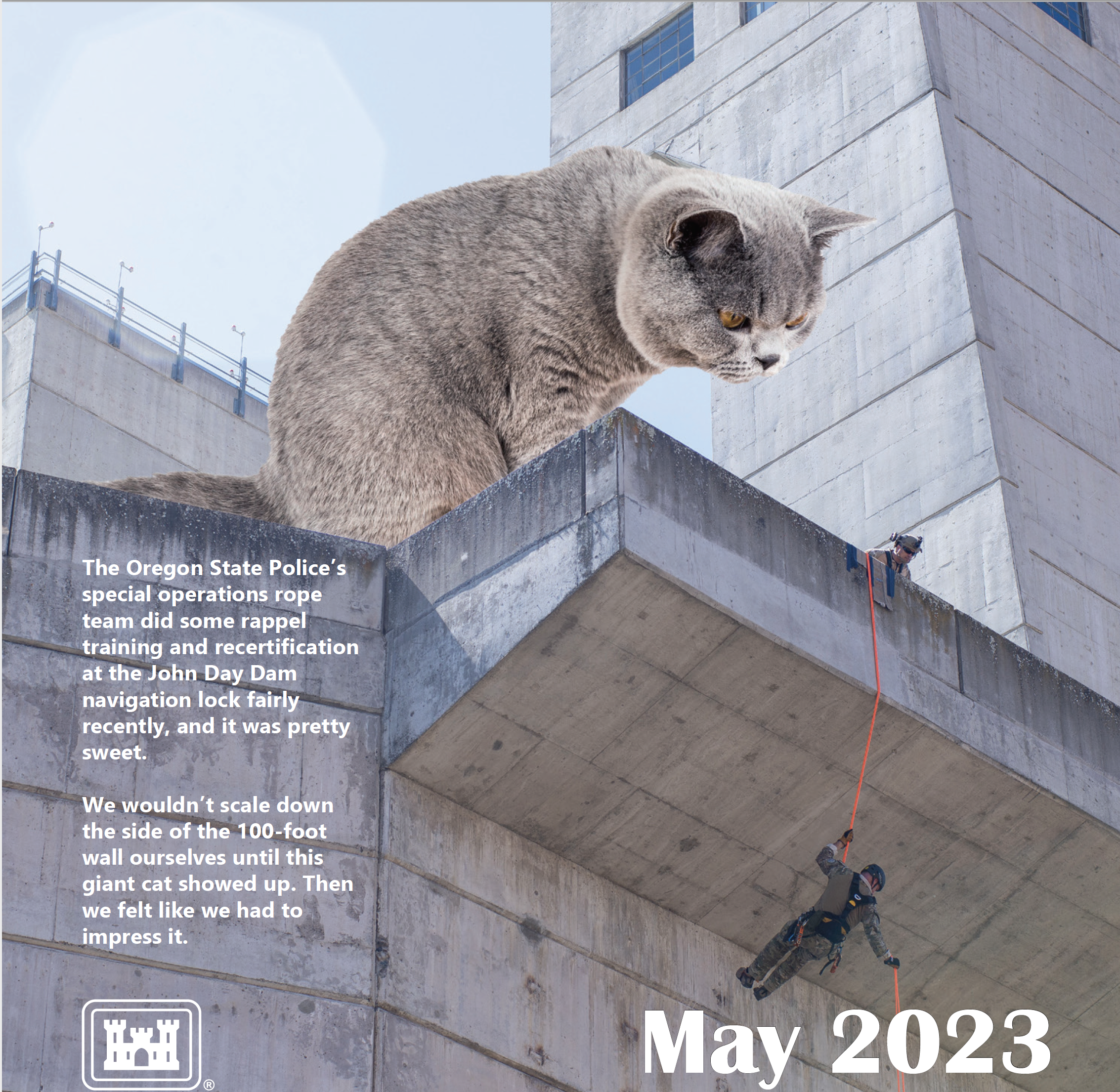 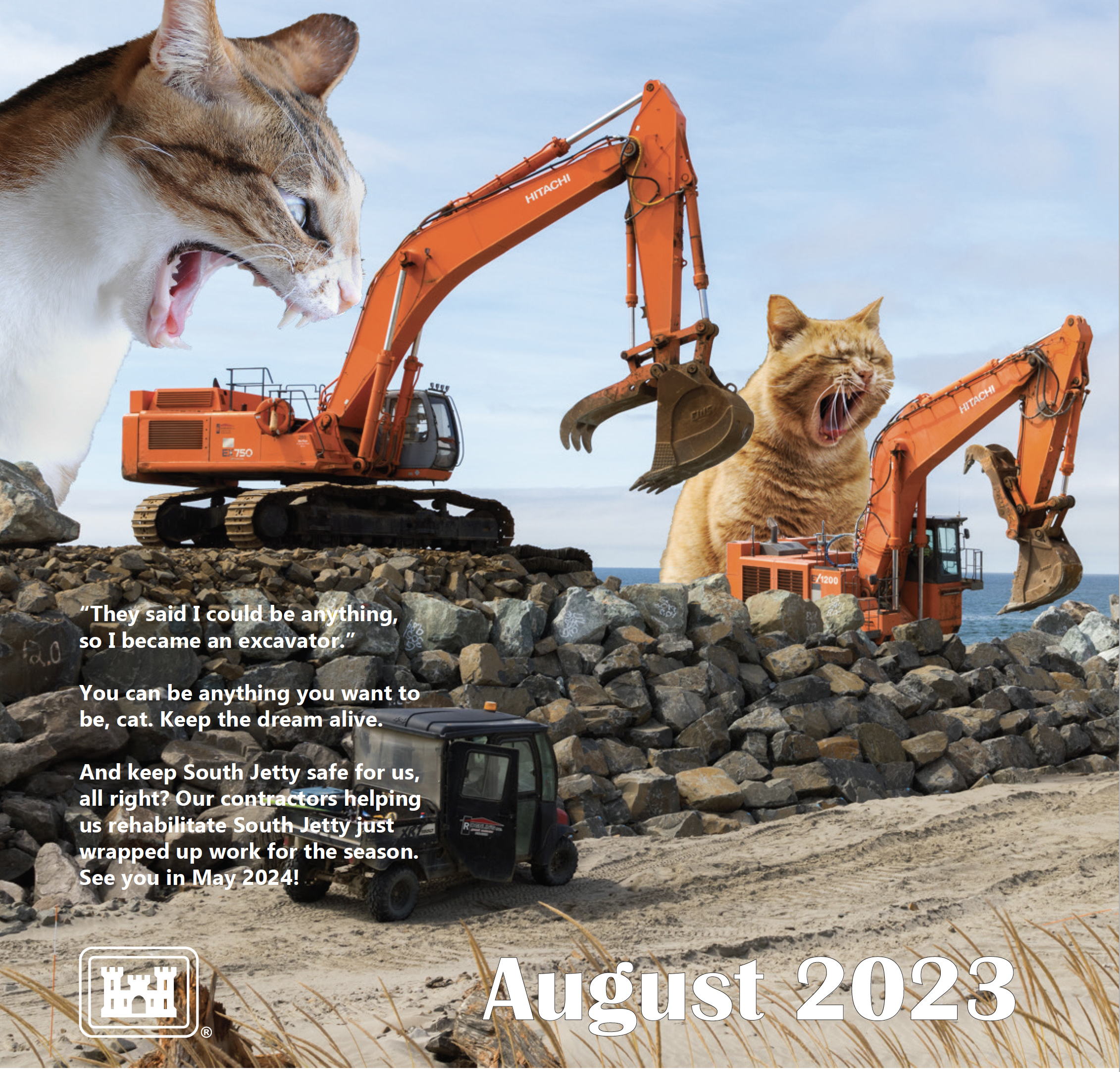 And the best month (mark your calendars!): 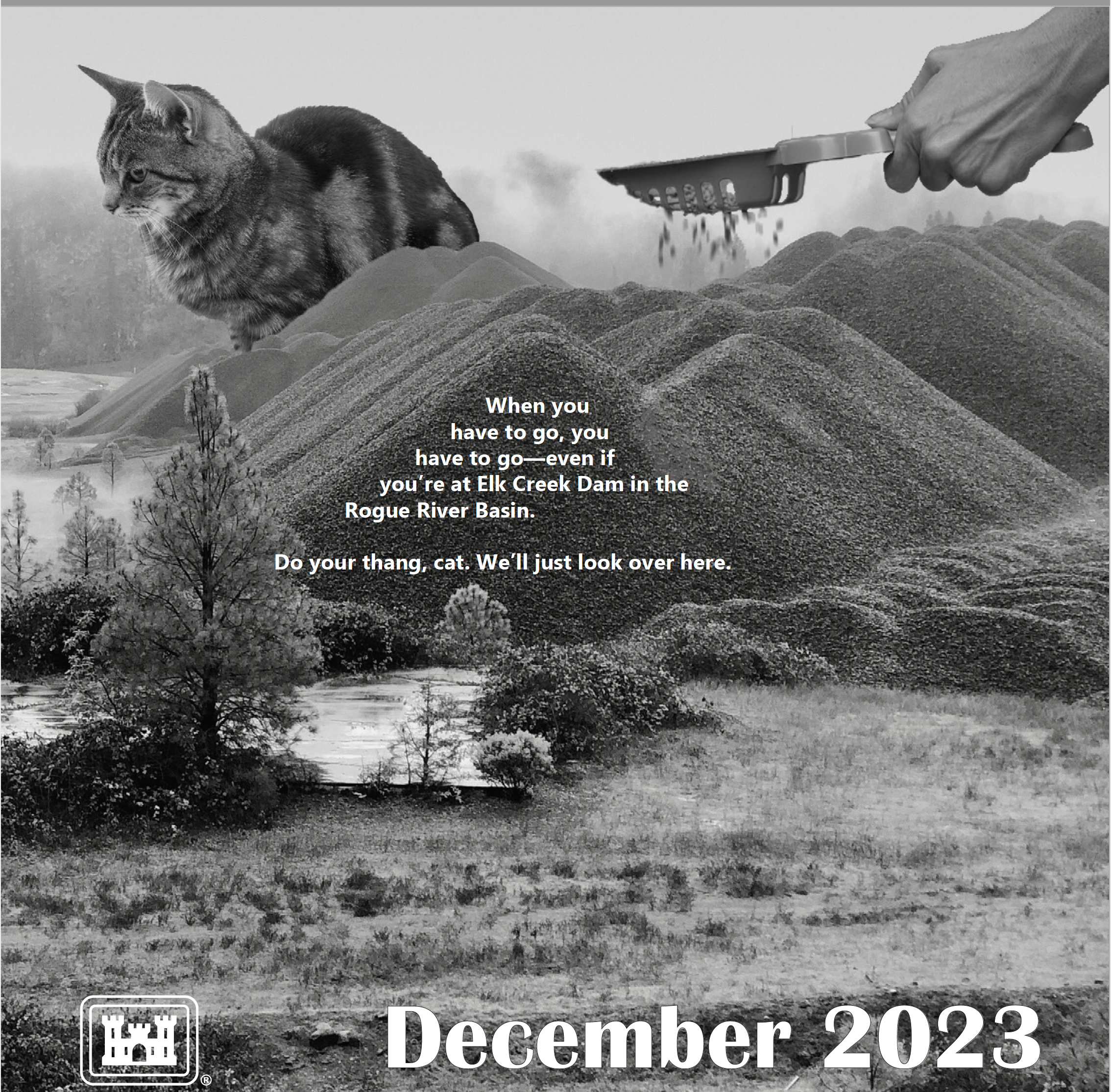 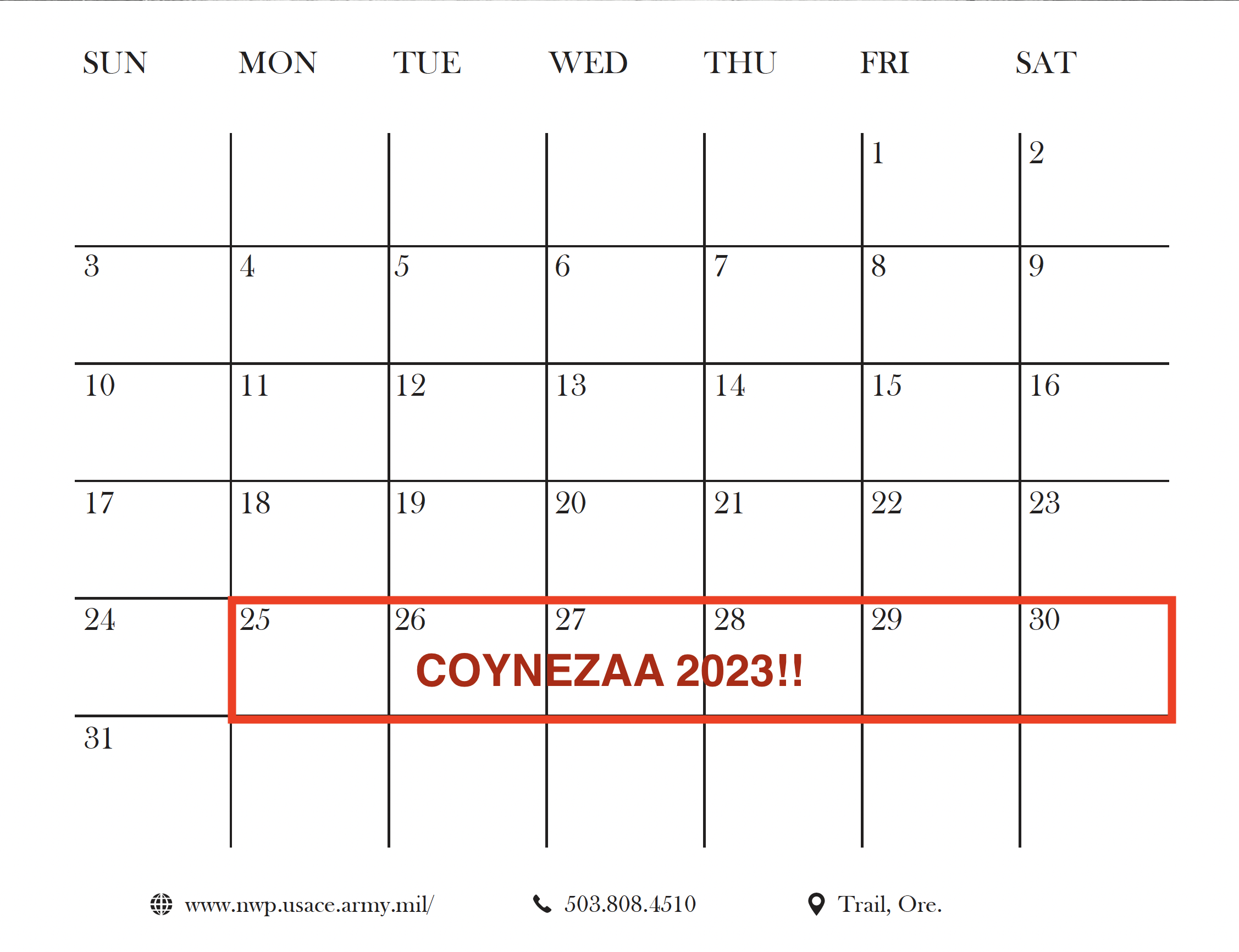