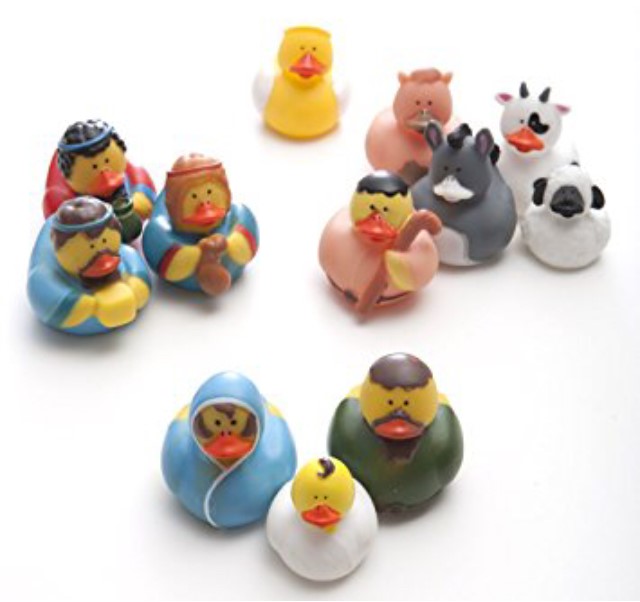 Readers are welcome to mark notable events, births, or deaths on this by consulting the January 13 Wikipedia page.

*Obituary: Lisa Marie Presley, the only child of Elvis (her mother was Priscilla Presley, who’s still with us), died yesterday at the age of only 54. She had attended the Golden Globes only two days before, and the cause was a heart attack:

The announcement came just hours after Priscilla Presley had confirmed that Lisa Marie Presley was rushed to the hospital earlier Thursday.

Los Angeles County paramedics were dispatched to a Calabasas home at 10:37 a.m. following a report of a woman in full cardiac arrest, according to Craig Little, a spokesperson for the county’s fire department. Property records indicate Presley was a resident at that address.

Paramedics arrived about six minutes later, Little said. A subsequent statement from the Los Angeles County Sheriff’s Department said paramedics performed CPR and “determined the patient had signs of life” before taking her to a hospital in nearby West Hills immediately.

Last night it was announce only that she’d been hospitalized (no cause given). She had been married to married to musician Danny Keough, singer Michael Jackson, actor Nicolas Cage, and music producer Michael Lockwood. (I had no idea.)  Here’s a photo of her from the Golden Globe. 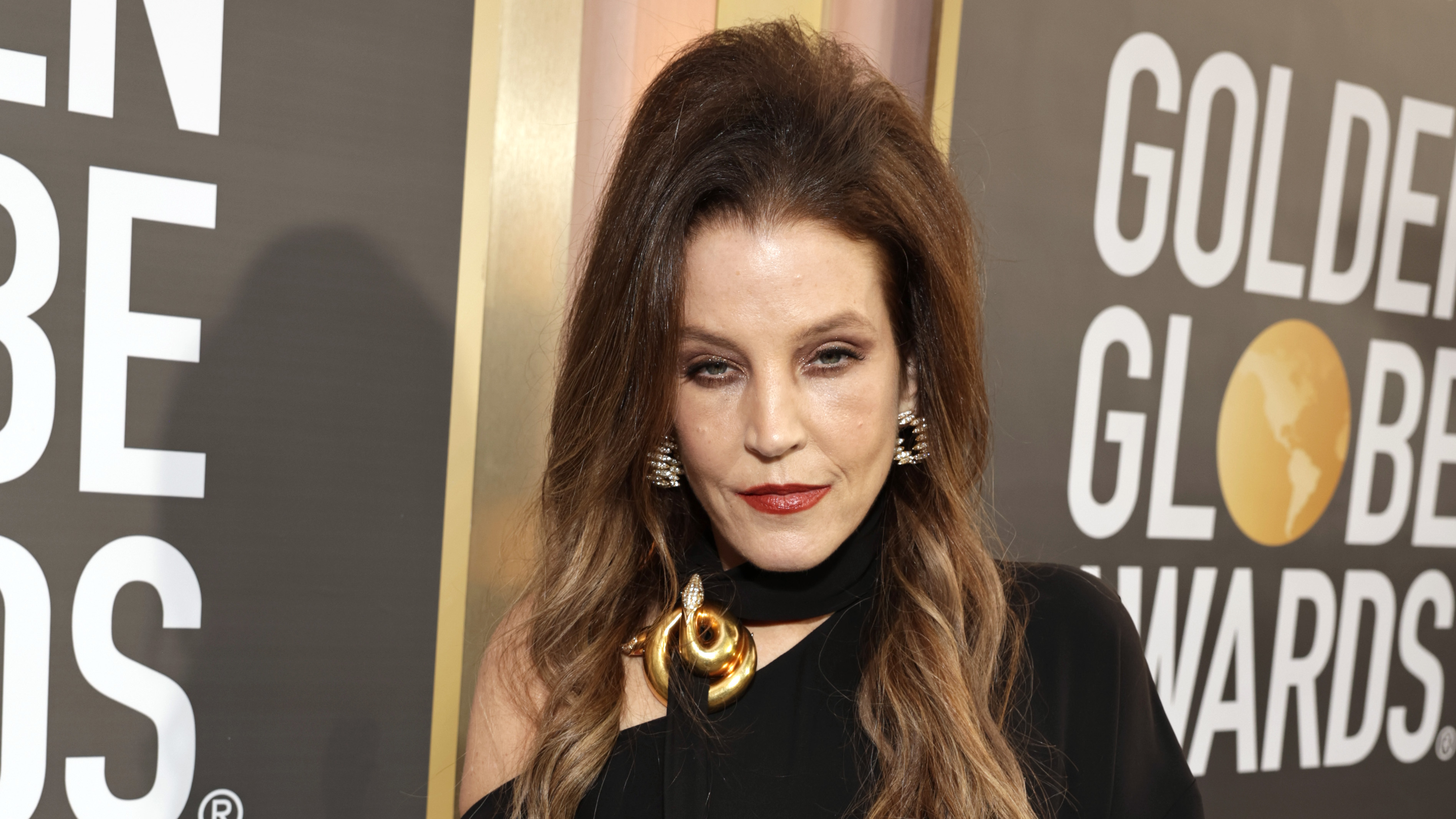 *Harriet Hall, whom many of us knew from Science-Based Medicine, also died suddenly two days ago. (h/t: Ginger K.) Hall was 77, a skeptic (I met her at TAM—James Randi’s “The Amazing Meeting”—years ago and found her a lovely person), and one of the first female Air Force flight surgeons. She was on this website most recently when her SBM colleagues took down a positive review that Hall had written about Abigail Schrier’s book Irreversible Damage (see here for the skinny). Here’s Hall at TAM in 2009: 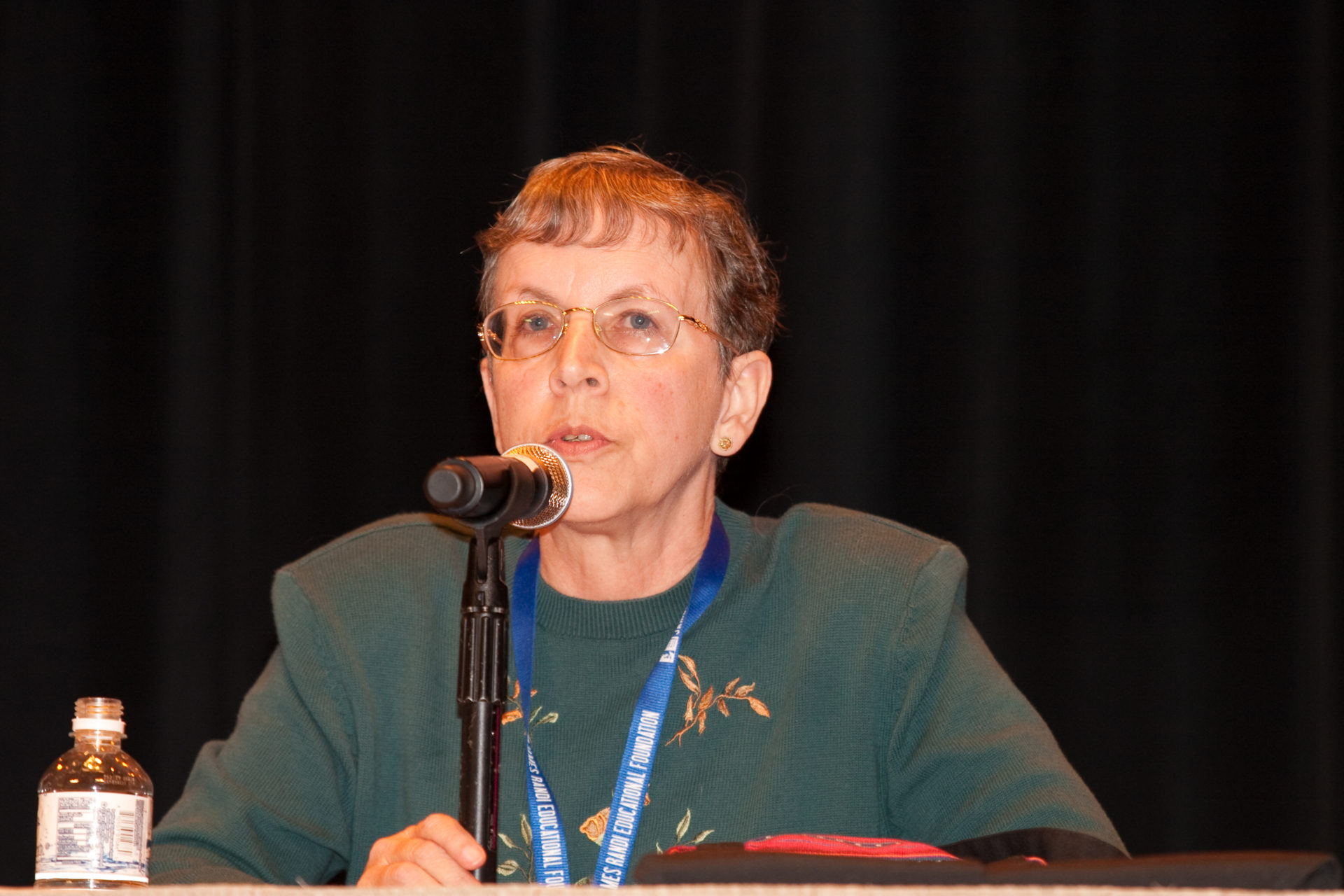 *The next-to-the-top news is that In-N-Out Burger, a staple of the West Coast, is moving east, planning to open a single store in Tennessee in 2026. Why so long? And why not Illinois. I’ll be too old to eat ’em by the time they get here! Ask one who knows (or, rather, knew):

*Is Biden going to get in trouble now that they’ve found two batches of classified documents in places where he worked as Vice President? He didn’t withhold them or pretend they didn’t exist, as Trump did, and I don’t see his situation as identical to Trump’s by any means, but nevertheless Republicans are howling their fool heads off and now Attorney General Ted Garland has named a special counsel to investigate the Biden “perfidy”:

Attorney General Merrick B. Garland appointed a special counsel on Thursday to look into President Biden’s handling of classified documents from his time in the Obama administration. The appointment of Robert K. Hur, a veteran prosecutor who worked in the Trump administration, came after the White House revealed this week that documents from Mr. Biden’s time as vice president had been found in two locations.

The Republicans are just itching to get at President Biden (aka “Uncle Joe”) and this is their opportunity. Given half a chance, they’d move for impeachment in the Senate, but they can’t win there: it takes a 2/3 vote to convict.

*Speaking of Presidents, the Washington Post revealed a bizarre revelation in the trial of the head of the jingoistic and neo-fascist Proud Boys organization. Can you imagine this happening? (My bolding below.)

Opening statements are underway in the trial of longtime Proud Boys Chairman Henry “Enrique” Tarrio and four other associates of the right-wing group charged with seditious conspiracy in the Jan. 6, 2021, Capitol riot.

For over an hour, Assistant U.S. Attorney Jason McCullough showed jurors violent video and profane audio of the defendants, saying the evidence is overwhelming that they planned to keep President Donald Trump in power by force. Two years after the attack, the trial is one of the most high profile of the sprawling investigation into the day’s events.

Now how the deuce did the Proud Boys plan to keep Trump in office by force. Were they going to ask Trump to order the Army to protect him and repel those who would displace him? That shows how insane the group really is. Well, they’ll soon be locked up.

*I wasn’t aware until I saw Wednesday’s evening news that domestic air traffic in the US came to a complete standstill on Wednesday morning. That’s right: not a single flight took off: there was a complete ground hold. And the delays persisted until yesterday. Why? Because there was a glitch in an outdated computer system:

The FAA ordered the ground stop after its Notice to Air Missions system, which provides safety information to pilots, sustained an outage that the agency blamed on a damaged database file. Biden administration officials and cybersecurity experts said that the cause didn’t appear to be a cyberattack.

They rebooted the system, but that took some time what with the corrupted file, and the delays of course ramified over two days. The system needs updating very badly:

FAA efforts over the years to upgrade air-traffic control technology have “struggled in some respects and one cause that has been pointed to has been the lack of stable, consistent funding,” said Arjun Garg, former chief counsel at the FAA.

When the Transportation Department made its annual budget request to Congress last year for the FAA, it sought $29.4 million to accelerate development of a program that would let the agency eliminate what it called “failing vintage hardware” that currently supports the Notam alert system. The system has failed at least two other times since early 2021, industry officials said, though in those cases the FAA was able to avoid widespread impacts to flights.

“It’s been in need of an upgrade for quite some time,” said Joel Wade, a former FAA official who dealt with the system before he retired from the agency in 2021. “They should have done it a long time ago.”

I have two trips overseas coming up, and I tell you: I have little confidence that any of those flights out of the U.S. will leave on time. There will be either bad weather or a computer glitch, and either can foul up traffic for days.

*The BBC (and other sites) report that the word “Brownies” (a subgroup of the organization) has been dropped by Canada’s Girl Guides. (h/t Mark, Colin). If you are a sentient being in the West, you will know why, but let the BBC explain:

The Girl Guides of Canada has renamed the “Brownies” branch – who are now called the “Embers” – after the old name was deemed too racially divisive.

“Embers are full of potential and when they work together, they can ignite a powerful flame!” the Girl Guides of Canada (GGC) tweeted on Wednesday.

The group said in November that the old name had caused “harm” to some minority members, and kept girls from joining.

CEO Jill Zelmanovits says the girls have been very open to the name change.

“After hearing from our girl, youth and adult members, it was resoundingly clear that this was the preferred choice,” Mrs Zelmanovits said in a news release.

“We can’t wait to keep bringing the magic of Girl Guides to girls ages seven and eight, now with the name Embers.”

The decision came after input from current and former members, who said that the previous name “caused harm and was a barrier to belonging for racialised girls and women”.

What are the Brownies? From the DH news:

The program for seven and eight-year-olds is one of several in the Girl Guides suite — including Sparks, Guides, Pathfinders, and Rangers. All of the programs teach outdoor skills and teamwork and encourage kids to find their voice.

Well, it sound dubious to me, and I have severe questions about how much “harm” this caused (all we ever get is the claim, never even a quotation), but, as Vonnegut said, so it goes. But will we have to change the name of the pastry as well? “Brownbagging” lunch has already been declared off limits.

*You know, I used to bash the Huffington Post for years, but I got tired of it; the site is just an illiberal leftist rag that depends on Twitter for its continued existence. But for the first time in about a year, I looked at it today, and found one article asserting that Prince Harry’s new ghostwritten memoir, Spare, is full of mistakes, some of them not trivial. Time and places and events are out of place, or didn’t happen at all. In fact, the ghostwriter himself, who reportedly got a cool million for his job, tweeted this out:

Get a load of that. “So-called objective facts”! Is he a postmodernist now?

Some of Harry’s errors:

[The “faulty memory tweet”] follows the media reporting on a series of claims in “Spare” that they say are not true.

And this isn’t faulty memory, but an arrant whopper:

Many of Prince Harry’s claims in Spare are difficult to check without any evidence but there are other straightforward mistakes that cast doubt on its reliability. Eg he gets it wrong on where he was when the Queen Mother died and there’s this little one. https://t.co/eDBqv9b9od

The highlighted article says this:

Harry revealed that despite receiving an official clothing allowance from his father, he would shop for his “everyday casual clothes” in TK Maxx, adding that he was “particularly fond” of the discount store’s annual sale.

But a spokesperson has refuted this, as they told Express.co.uk: “Whilst we’re delighted Prince Harry is a big fan, we thought we should explain we don’t actually do sales. Instead, we offer great value, style, and savings all year round.”

Harry recounts vivid memories of those sales in his book.  And some of his “mis-memories” are pretty recent:

This was The Times… pic.twitter.com/NrOiavoXui

Meanwhile in Dobrzyn, Hili is making biscuits!  And the picture is lovely, too.

A: Why do you knead me before you lie down on me?
Hili: I have to check whether there are any broken ribs sticking out that could harm me. 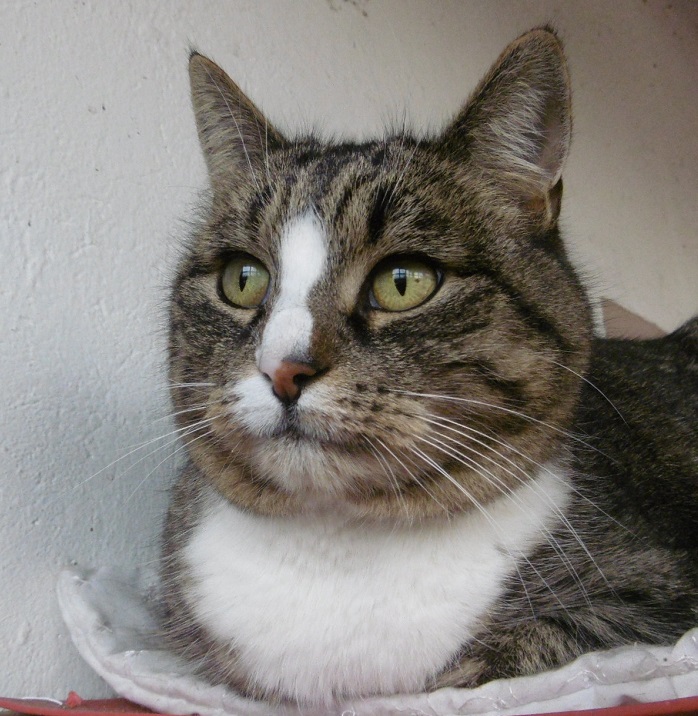 From Marie, a Charles Addams cartoon: 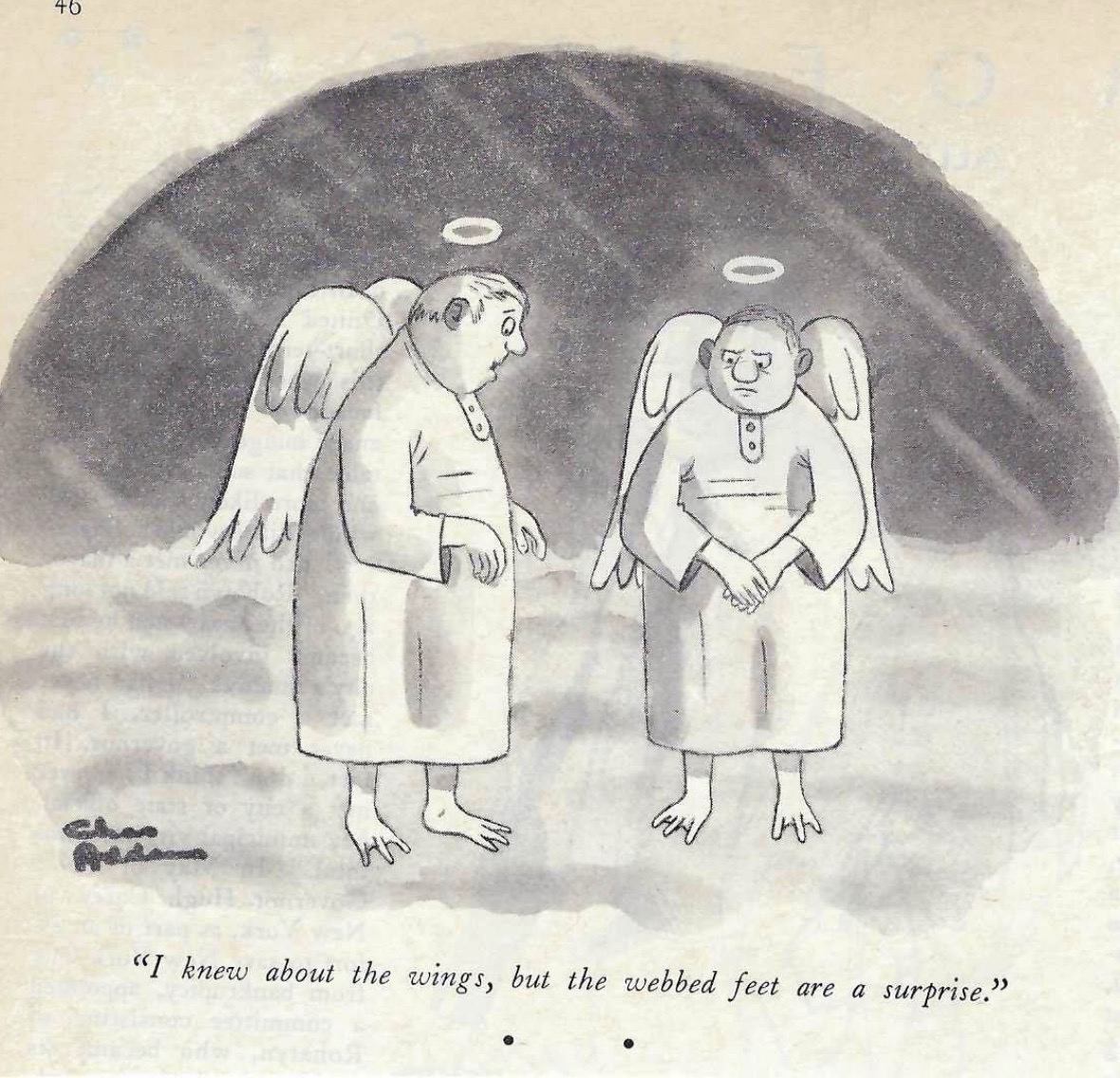 From Jesus of the Day, a poor translation: 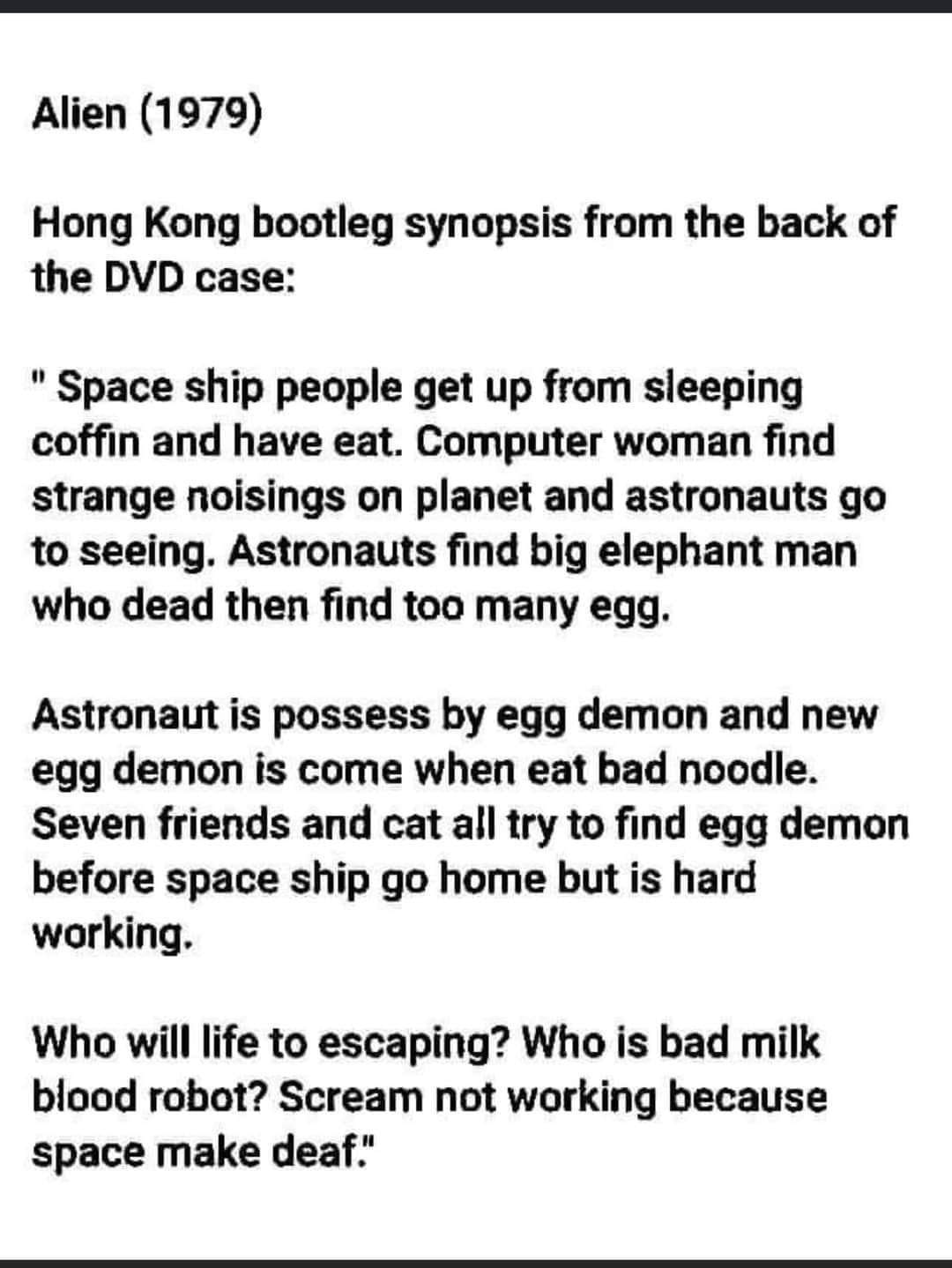 From a Facebook site, an analogue to Serrano’s “Piss Christ”: 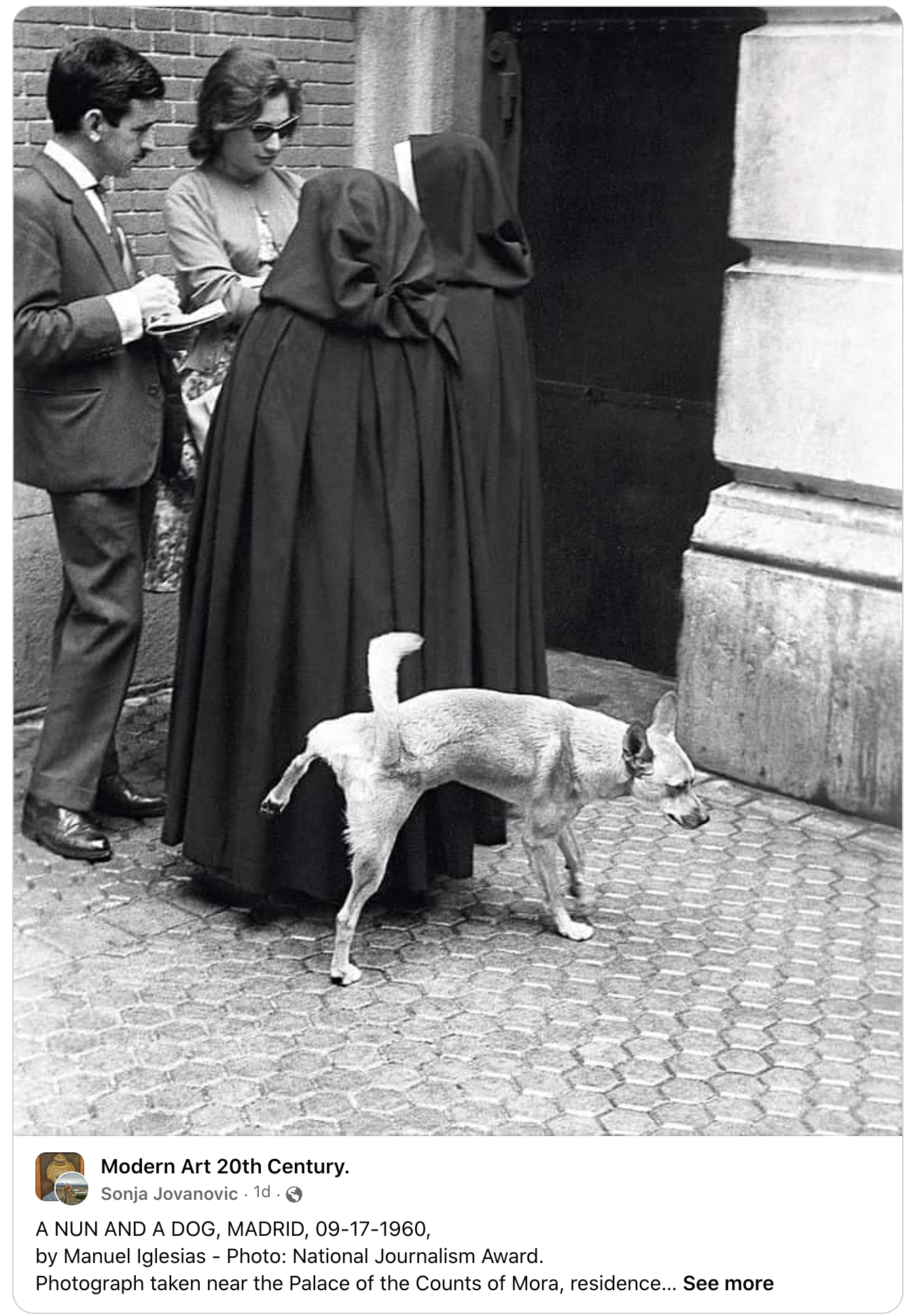 Over at Mastodon, God shows that he’s been reading the woke literature:

From Masih: a protestor released from prison

#AtefeShamasi, who was arrested by the government agents was just released after 36 days in detention. When the detainees of Iran revolution are released after days or months of torture in prison, they still refuse to wear hijab or show any fear.

From Malcolm: a Guatemalan volcano erupting about five months ago:

An impressive eruption of the Volcán de Fuego, Guatemala, captured on August 27, 2022

From Simon: a comedy of errors. Be sure you watch till the end, and sound up:

If you could use a laugh today.
Absolute perfection.
Please wait for all of it…pic.twitter.com/S2pu6deUz6

From cesar. I haven’t verified whether this letter, purportedly from the president of Hamhanded University and refusing to back down on the Muhammad issue, is genuine. If it is, the Presient should be the woman who was fired!

The president of Hamline University is not backing down at all. She argues it’s not an academic freedom issue, she didn’t fire the professor either. pic.twitter.com/YqwNNVVB8e

From the Auschwitz Memorial, a woman dead at 20.

13 January 1924 | Czech Jewish woman Edita Kohnová was born in Prague. She was a student.

On 4 October 1944 she arrived at #Auschwitz in a transport from #Theresienstadt ghetto. She did not survive. pic.twitter.com/GTbURoC56s

Tweets from Professor Cobb. The first I’ve put up before, but will do so again. The New World as a duck!