The Wedge Document, the manifesto written by the Discovery Institute (DI) to outline the future proliferation of Intelligent Design (ID), was composed in 1998. It was leaked a long time ago, and you can see it here. If you read it, you’ll find that they’ve missed their temporal “goals” by a long shot. Below are the document’s goals for five years after the document (2003) and for twenty years after (2018). We’re  now five years past their twenty-year mark, and, as you see, nothing much has happened. (Bolding is mine.)

Ooops! We’re now 25 years in, and they haven’t even reached their five-year goals! In fact, Intelligent design has been discredited, and in the 2005 Kitzmiller decision in Pennsylvania, Judge Jones declared ID “not science” so that teaching it in public schools was prohibited as an incursion of religion into government. ID pretty much died after that, and there have been no further judicial decisions, so banning ID from public schools is the law. (Fingers crossed that the new, religiously conservative Supreme Court doesn’t change that.) ID sure as hell isn’t “the dominant perspective in science.”

I often wonder if ID’s proponents, like Wells, Behe, Dembski, and Meyer, who still act as if they triumphed, ever lie awake at night and think about how badly theyt failed. For this is science, and the truth will out. But they’re still at it, like a cow walking in circles forever even after it’s been disconnected from the water mill.

Over at The Panda’s Thumb site, ID opponent and biology professor Nathan Lents summarizes a year of dismal failure for ID and the Discovery Institute. If you’ve followed the DI, you’ll know that they founded a “Biologic Institute” to do “research” on ID, but to get their work publicized they not only had to found their own journal, BIO-Complexity, but they hardly published anything. (Most of the articles were written by the editors.)

Lents announces in the article below (click on screenshot), and Matt Young in another Panda’s Thumb post (click on screenshot), that the Biologic Institute was more or less a nothingburger, and has finally closed down (see my post on its fakery here). No more ID research! Oh no—how will they make it the “dominant paradigm in science without research?

First, their “impressive year”, in which the journal BIO-Complexity published a total of three—count them, three—articles

Lents describes a new paper in the journal about how the human ankle is so complex that it must have been designed (ergo Jesus), and makes a few point about that paper and the journal itself. I’ve left out some points, but the indented ones below are in Lents’s words:

1). This is just the third and final article published in in the journal in all of 2022. Their original ambitious goal was one article per month (lol), but they have yet to exceed four articles in any calendar year. In 2017, they published just one manuscript in the “research article” category and one “critical review.” This year, the three published articles are in the “critical focus” category, meaning they did not publish a single “research article” in 2022.

2). The article above was written by someone who is also on the editorial board of the journal. In fact, nearly all of the contributing authors in the history of the journal are also editors and most are also Discovery Institute fellows or contributors. In 2010-2011, the journal published a total of seven articles across all article types, four of them co-authored by editor-in-chief Douglas Axe. Of course, it is not unheard of that a journal occasionally publishes original work by someone on the editorial board, but this practice is usually kept to a minimum for obvious reasons.

3). 2022 was exceptional, however, because the three articles published in BIO-Complexity [sic] are all by different authors! In most years, to reach the impressive feat of 3 or 4 articles, they publish multiple articles from the same author or team of authors, essentially by cutting articles into pieces. For example, the entire published work of the journal in 2021 is three articles, all by the same author, with titles ending in “part 1,” “part 2,” and “part 3.” In the year before that, two of the four published articles were by the same trio of authors and cover the same topic. The exact same was true for 2016.

4.)  The article above was written by someone who is also on the editorial board of the journal. In fact, nearly all of the contributing authors in the history of the journal are also editors and most are also Discovery Institute fellows or contributors. In 2010-2011, the journal published a total of seven articles across all article types, four of them co-authored by editor-in-chief Douglas Axe. Of course, it is not unheard of that a journal occasionally publishes original work by someone on the editorial board, but this practice is usually kept to a minimum for obvious reasons.

It’s hilarious that ID “research” is coming out in only one to four articles per year, but also that there were seven articles in 2020-2011, four of which were couthored by the “journal’s” editor Douglas Axe, who, as you see below, was the only employee of the Biologic Institute. Most of the other articles were written by journal editors, which of course shows that ID research is not taking over the field, but is limited to a small band of God-fearing zealots.

The second post, put up in May of 2021 by Matt Young, announces the closing of the Biologic Institute, and also gives some interesting info from its tax returns. (The last paper they list under their published research came out in 2014.) This is from Young’s piece:

The blogger known as the Sensuous Curmudgeon reported yesterday that the Biologic Institute, supposedly the research arm of the Discovery Institute, is closing:

Appears the Biologic Institute [An enterprise of the Discovery Institute] is history, green screen and all. On their 2019 990, Director Axe will no longer draw a salary, but will be a prof at Biola “Univ.” Office space is for rent. Location is listed as “permanently closed.” Their final 990 showed a loss of $133,000. [Emendation in original.]

I checked Guidestar for their latest IRS Form 990-EZ, which is dated 2019 and covers the fiscal year 2018 (Charity Navigator is a year behind). Sure enough, it contains the following statement on line 28:

DR. AXE ENTERED INTO AN AGREEMENT WITH BIOLA UNIVERSITY TO SERVE AS THE MAXWELL VISITING PROFESSOR OF MOLECULAR BIOLOGY DURING THE 2018/2019 ACADEMIC YEAR, WITH REGULAR VISITS TO CAMPUS. IN AUGUST 2019, DR. AXE BECAME THE MAXWELL PROFESSOR OF MOLECULAR BIOLOGY AT BIOLA, WORKING FULL TIME ON TEACHING AND WORKING TO HELP BUILD A COLLABORATIVE RESEARCH ENVIRONMENT AT BIOLA THAT INCLUDES ADVANCED UNDERGRADUATE STUDENTS. ALTHOUGH HE NO LONGER DRAWS A SALARY FROM BIOLOGIC INSTITUTE, DR. AXE CONTINUES TO SERVE AS THE DIRECTOR AND IS EXPLORING WAYS IN WHICH BIOLOGIC CAN PARTNER WITH BIOLA.

The “Dr. Axe” in question is Douglas Axe, the president of the Biologic Institute. His salary of $133,333 in 2018 was the bulk of the total expenses of $201,873. Revenue was $68,600, leaving a deficit almost exactly equal to Dr. Axe’s salary. Inasmuch as Dr. Axe “no longer draws a salary from Biologic Institute,” it seems safe to say that they are effectively out of business, even though he “is exploring ways in which Biologic can partner with Biola.”

“Biola University,” of course, used to be known as the Bible Institute of Los Angeles, and is an evangelical Christian school. It’s also the Elephant Burying Ground for all moribund IDers, including Eric Hedin, who left Ball State after they refused to let him teach religious ID in his science class.

In view of this, I feel that I can declare that the Wedge Strategy has failed, that Intelligent Design’s influence in the scientific community, rather than having become the “dominant paradigm”, has shrunk to a nearly invisible nubbin, and that the Discovery Institute no longer produces research but spends its time attacking evolutionists like me (Michael Egnor seems to be obsessed with me).  Since Egnor and his confrères are reading this, I’m going to give them a big fat raspberry and ask them “Where’s the beef?” 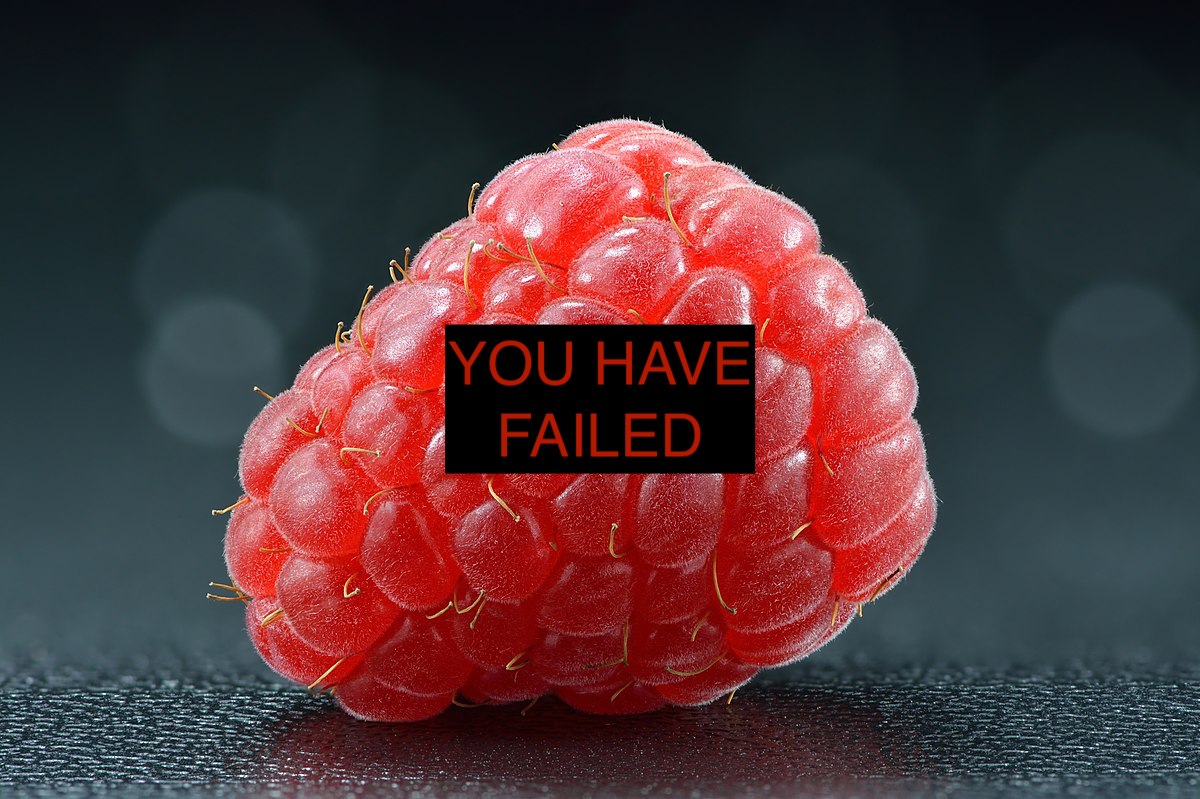 52 thoughts on “Intelligent Design nearly down the drain”