From CNN (and many other places like this one), we hear about the Guinness Officially Designated World’s Oldest Living Cat. Her name is Flossie, and, as of November 25, was the official Senior-est Cat on the planet.

Flossie, at the age of almost 27 – which is the feline equivalent of being 120 human years old, according to Guinness World Records – has been crowned the world’s oldest living cat.

The British brown and black cat received official recognition from Guinness World Records on Thursday at the record-breaking age of 26 years and 329 days, according to a news release. Although she’s poorly sighted and deaf, she is reportedly in good health.

“I knew from the start that Flossie was a special cat, but I didn’t imagine I’d share my home with a world record holder,” said owner Vicki Green, who adopted her after the elderly pet was handed in to UK cat welfare charity Cats Protection in August.

“She’s so affectionate and playful, especially sweet when you remember how old she is. I’m immensely proud that Cats Protection matched me with such an amazing cat,” she added.

Flossie has been in several homes since living as a stray kitten close to Merseyside hospital in Liverpool, northwestern England, in the first few months of her life in 1995.

She was adopted by a worker at the hospital, who she lived with for 10 years before her owner died. Flossie was taken in by her late owner’s sister. After 14 years, her second owner died. She was then with her second owner’s son for three years, before being entrusted to volunteers at Cats Protection.

That is when word of her incredible age began to spread and the journey to confirm her record began.

“We were flabbergasted when we saw that Flossie’s vet records showed her to be 27 years old,” said Naomi Rosling, the charity’s branch coordinator, in the release.

Most cat owners prefer to adopt a much younger cat, with elderly animals often living their final days in shelters, according to the release.

You can read about Creme Puff on Wikipedia, and I did part of a post on his staff, crusty Texan Jake Perry, (who also owned the world’s second oldest cat) here. 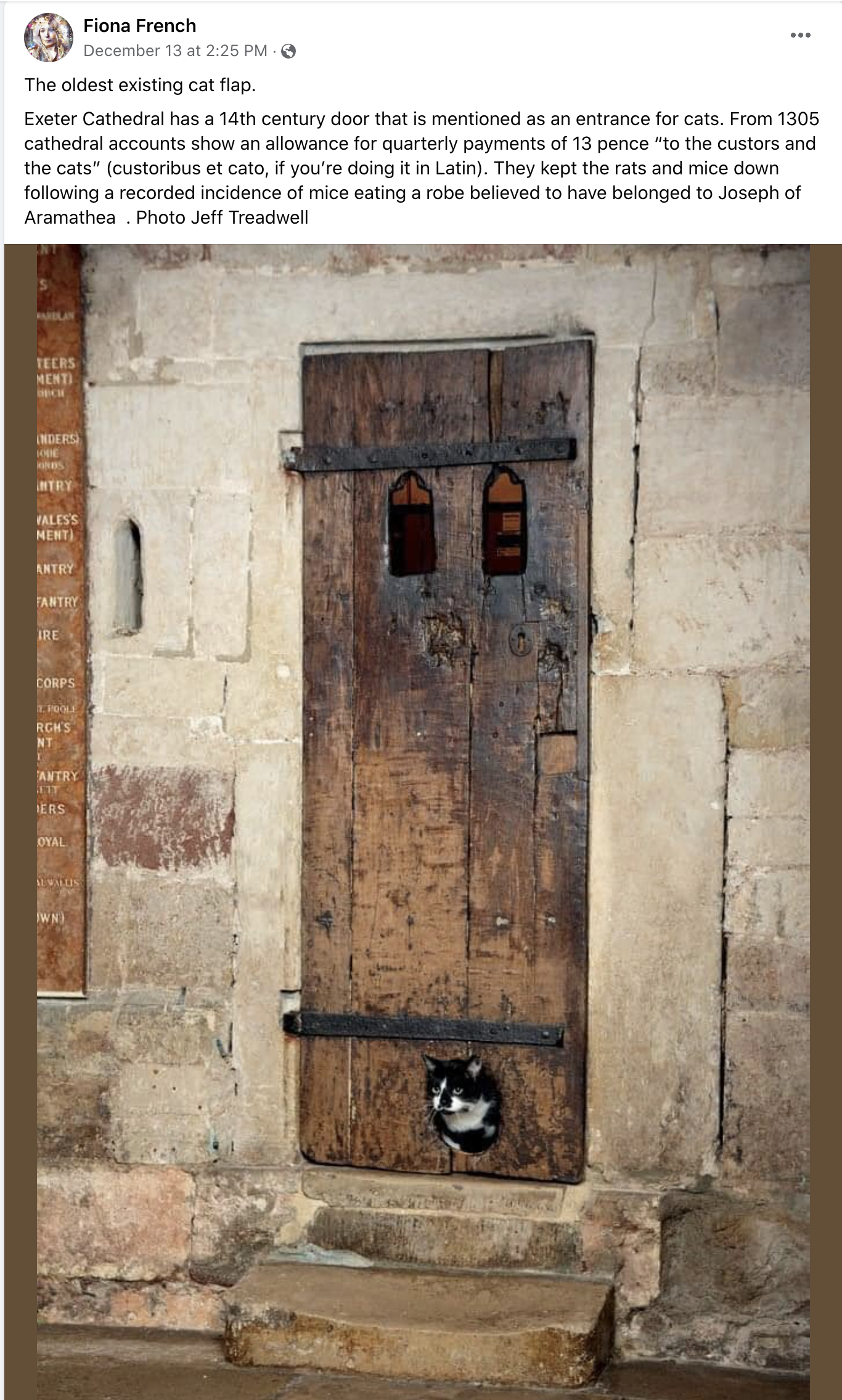 The name of the current cat is Stapledon, and he has his own page on the Exeter Cathedral website. A headshot: 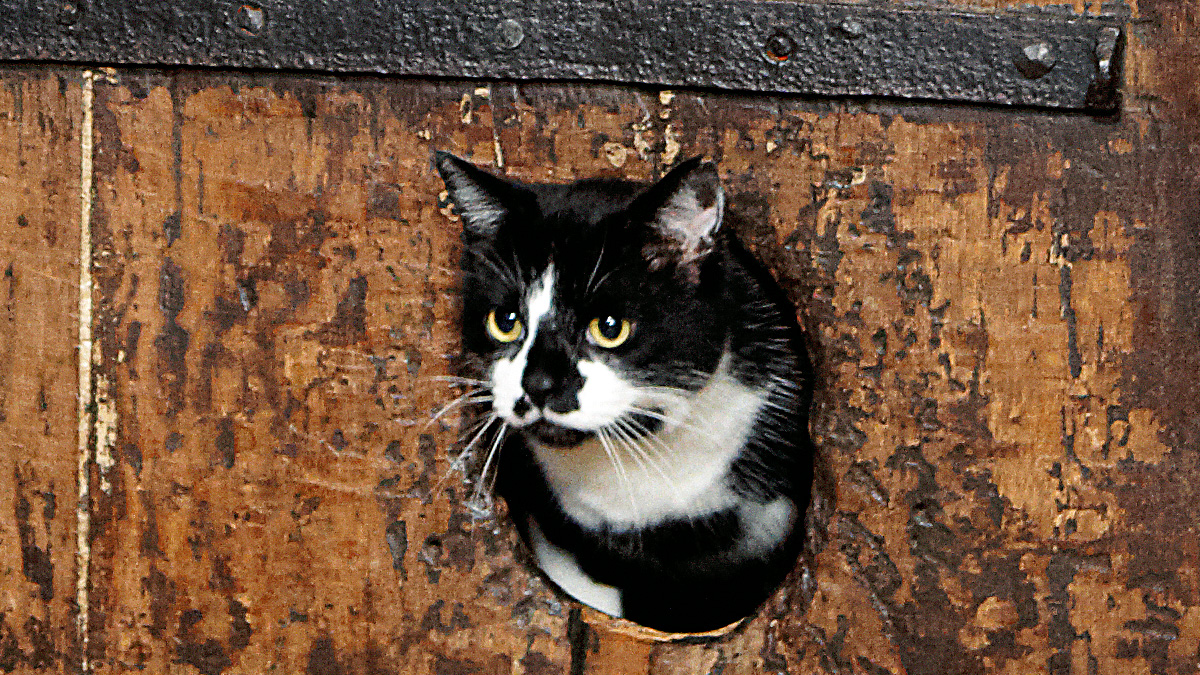 Why do cats “knead” you? (The behavior is also called “making biscuits”.) This short piece from Science Alert has the answer (cat owners probably already know it). Click to read: 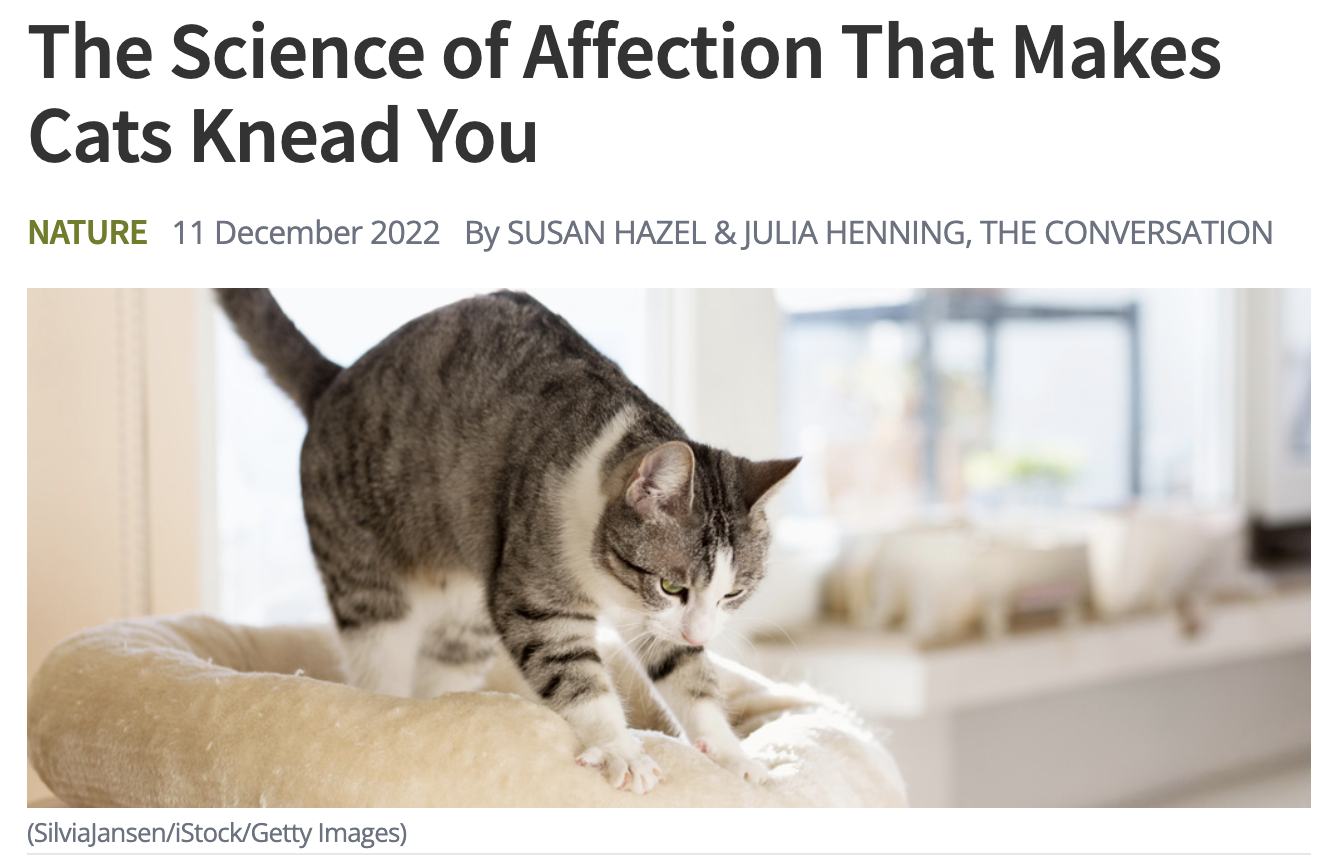 Kneading is when cats massage an object with the front paws, which extend and retract, one paw at a time.

This massaging action, named for its resemblance to kneading dough, is repeated rhythmically. You may have spotted your cat kneading and wondered how on Earth they developed such a behavior.

So, why do cats knead? Does it tell us anything about how they’re feeling, and is there anything you can do if they’re painfully kneading you while sitting on your lap?

. . .Cats first begin to knead when just tiny kittens, still nursing from their mother. Kneading is associated with suckling, which helps stimulate a mother cat’s milk supply through the release of oxytocin and likely evolved for this reason.

Kneading also has another evolutionary advantage. It can be used as a form of tactile and pheromone communication between kitten and mother.

Cats have scent glands in their soft paw pads, and when they knead, these glands release pheromones (chemical messages used to communicate).

Kneading on their mother releases pheromones associated with bonding, identification, health status, and many other messages.

One of these, known as “cat-appeasing pheromone”, is released by the sebaceous glands round the mammary glands.

. . .Kneading, in particular, may be retained into adulthood because it can help communicate messages.

Kneading on your lap is a cat’s way of saying, “we’re affiliated” or “you’re in my social group”. Or, to be very human about it, “you’re my person”.

We may also reinforce kneading by rewarding our cat with attention when they do it.

Some cats like to knead on soft or woolen blankets while also sucking on the material, as if from a teat. This may be relaxing or soothing for the cat because of this association.

. . .In most cases, kneading likely indicates your cat is comfortable.

However, if the kneading (and especially sucking) occur very frequently, for a long time, appears compulsive, or is beginning to damage your cat’s paws, legs, or mouth, it may be a sign your cat is stressed or in pain and needs to see a vet.

Kneading and sucking can become compulsive, a particular problem in Siamese and Birman cats.

The article gives tips on how to stop your cat from kneading you with its claws out.

Here’s a Dodo video showing a variety of moggies kneading. Sound low: the purring is LOUD! 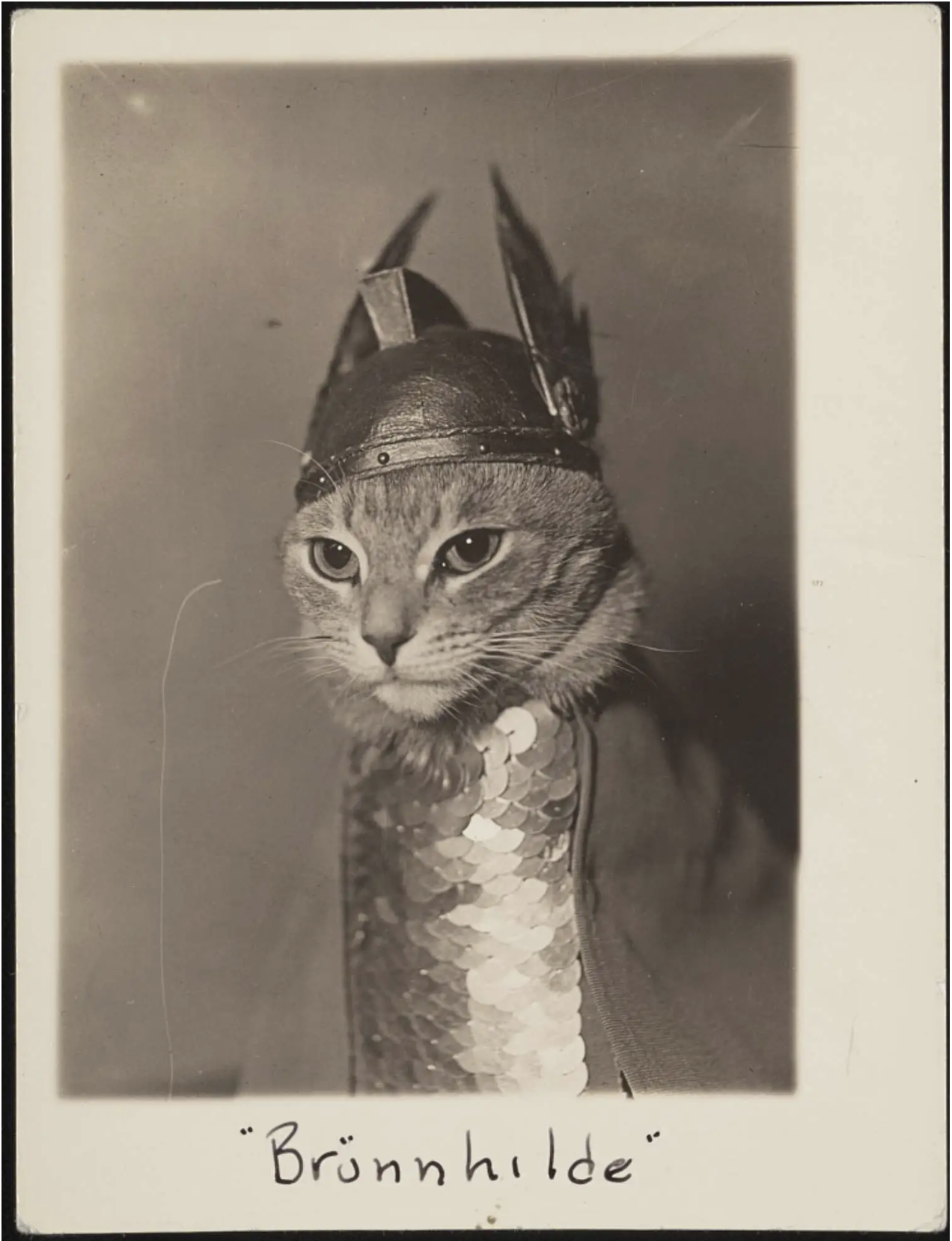 As with all of the Free to Use and Reuse sets shared by the Library of Congress, “The Library believes that this content is either in the public domain, has no known copyright, or has been cleared by the copyright owner for public use.”

Both photos courtesy of the U.S. Library of Congress. 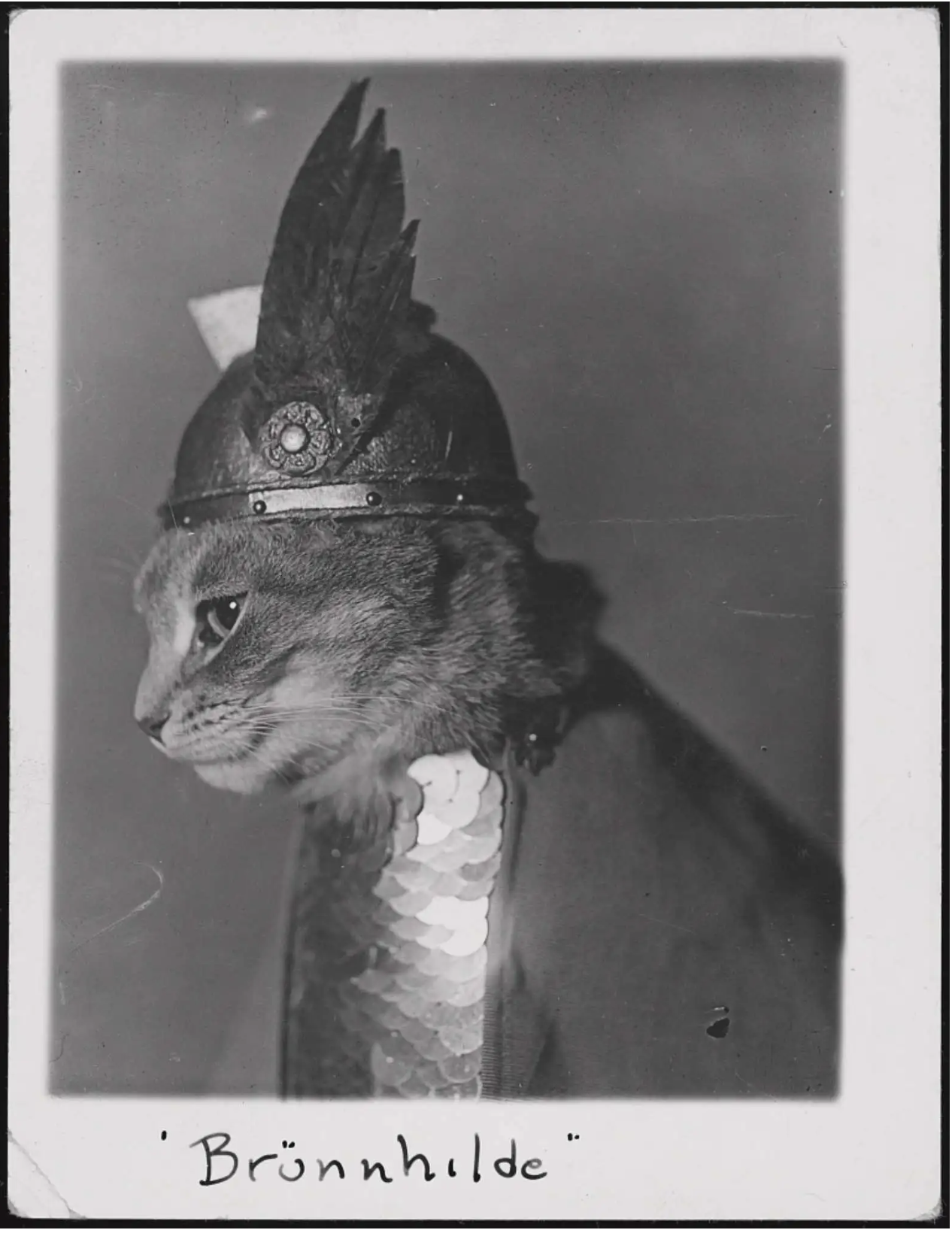 Three tweets about the photo and its history. I’m not sure why it’s so beloved. . .

The history of the photo was written up in "Advertising & Selling," Volume 27, Issues 8-13 (1936). Unfortunately, the entire article is not available for reading. pic.twitter.com/tCeStSM3Ur 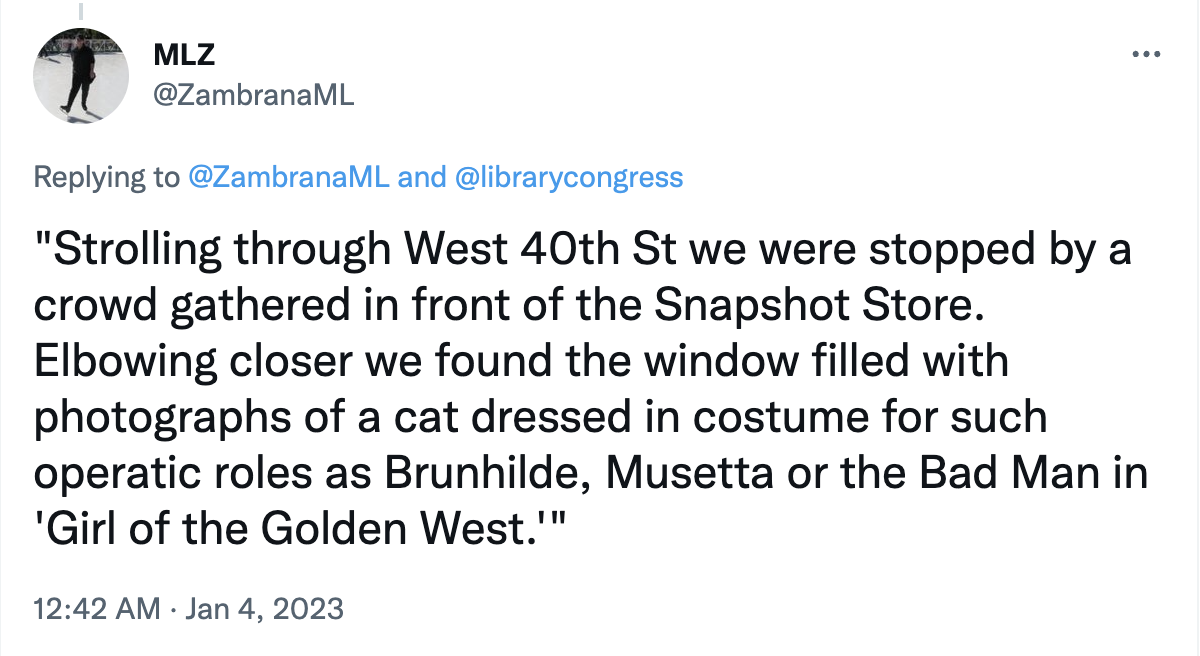 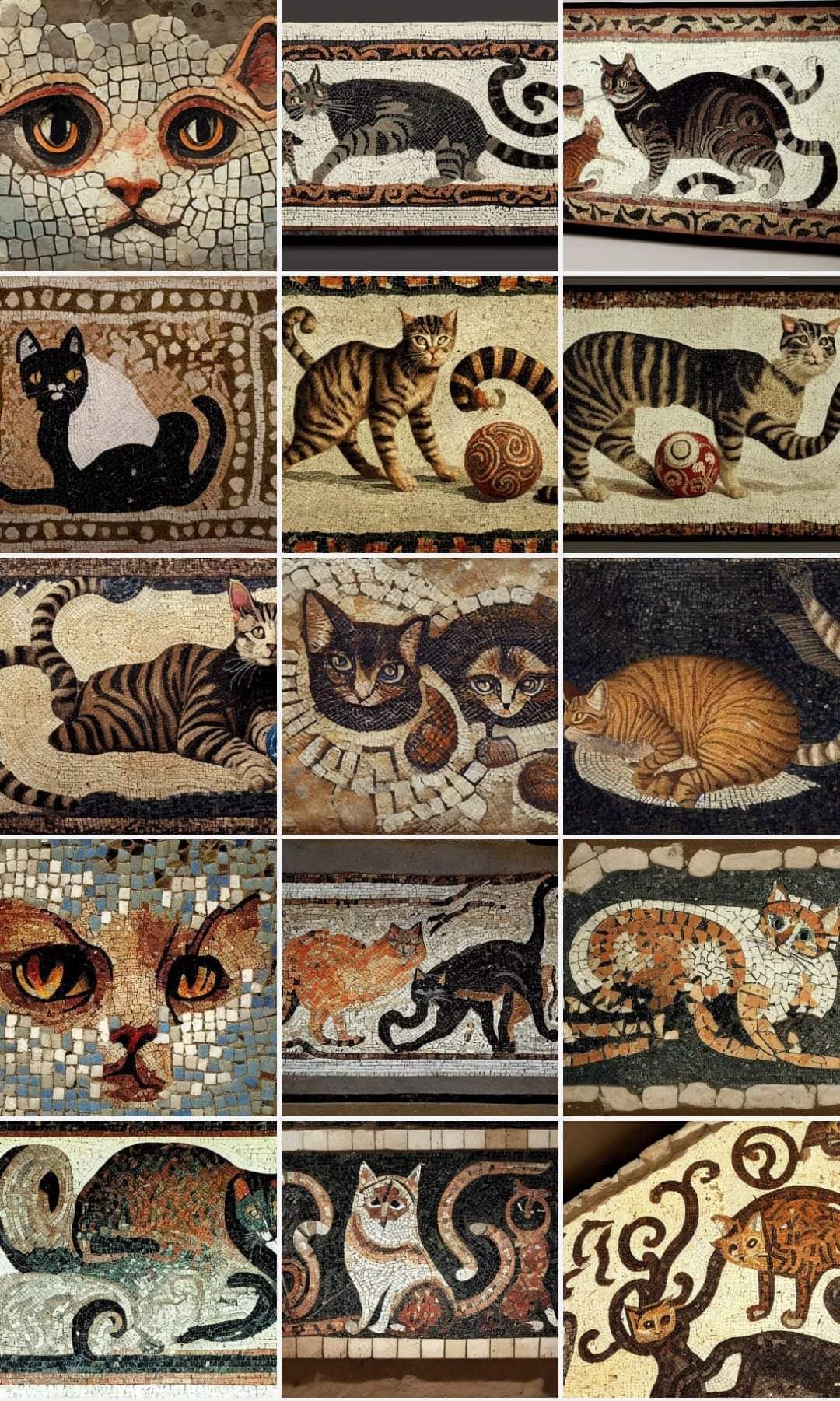