Today’s photos of dragonflies come from Mark Sturtevant. His captions and IDs are indented, and you can enlarge his photos by clicking on them:

On a different website where one shares pictures of arthropods, I have for many years run a series that for some reason I call “Dragontowne”.  Dragontowne is an imaginary place where one can wander around and meet my favorite insects, which are dragonflies. So next stop, Dragontowne!

First up is a female calico pennant (Celithemis elisa) in the skimmer family (Libellulidae). Pennants generally have boldly marked wings, hence the name. The picture is focus stacked from a few pictures taken by hand. These lovely but small dragons always perch at the tops of plants, so one generally must sneak up and stand directly over them to get this view. 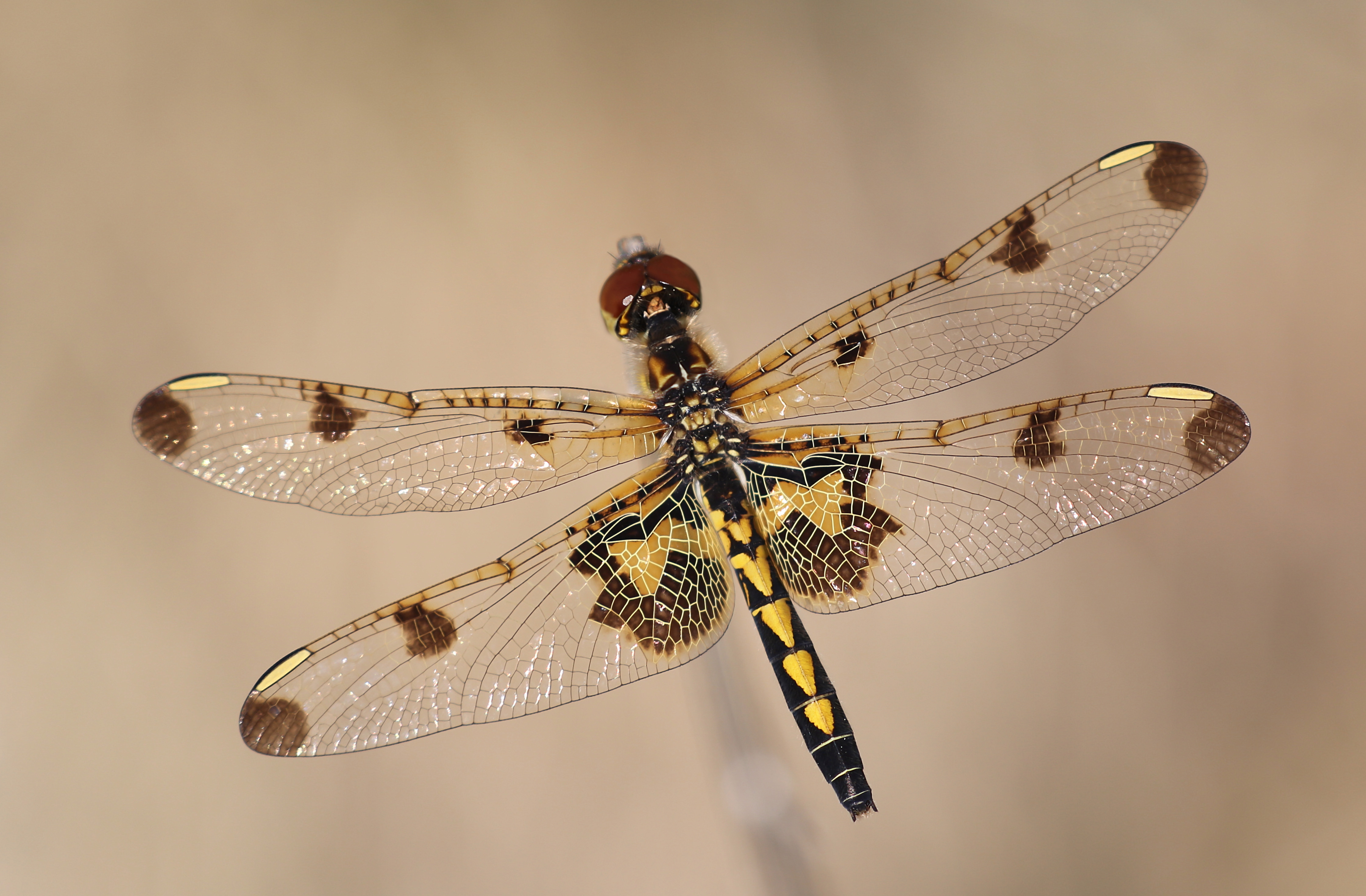 Clubtail dragonflies belong to the family Gomphidae, and are named after the enlarged end of their abdomen. As with the hobby of birding, those who chase dragonflies can refer to informative websites to learn where particular species of dragons may be found. According to online informants, there is a park about 2 hours drive away from me (in eastern Michigan) that hosts at least 12 different species of clubtails! The conditions there are perfect, with a clean gravel-bottomed river that loops around this park so the fields in the park become the main patrol ground for all kinds of dragonflies over several miles of river. So I go to this park when I can.

I have only a handful of local clubtail species yet to photograph, thanks to this place, and last summer I managed to get one of the “big club” species called the skillet clubtail (Gomphurus ventricosus). The name is inspired by the wide, frying-pan like club. This male had gotten hopelessly entangled in the weeds and could not fly out, so I rescued it. Photographing dragonflies in hand and getting close-ups of the abdomen is a standard thing to do for dragonfly enthusiasts since one can then document certain structures that are diagnostic to the species. But I don’t routinely catch dragonflies for fear of harming them. There is one more big club species to go, known as the cobra clubtail. They are in the field, but so far no luck at getting close enough. 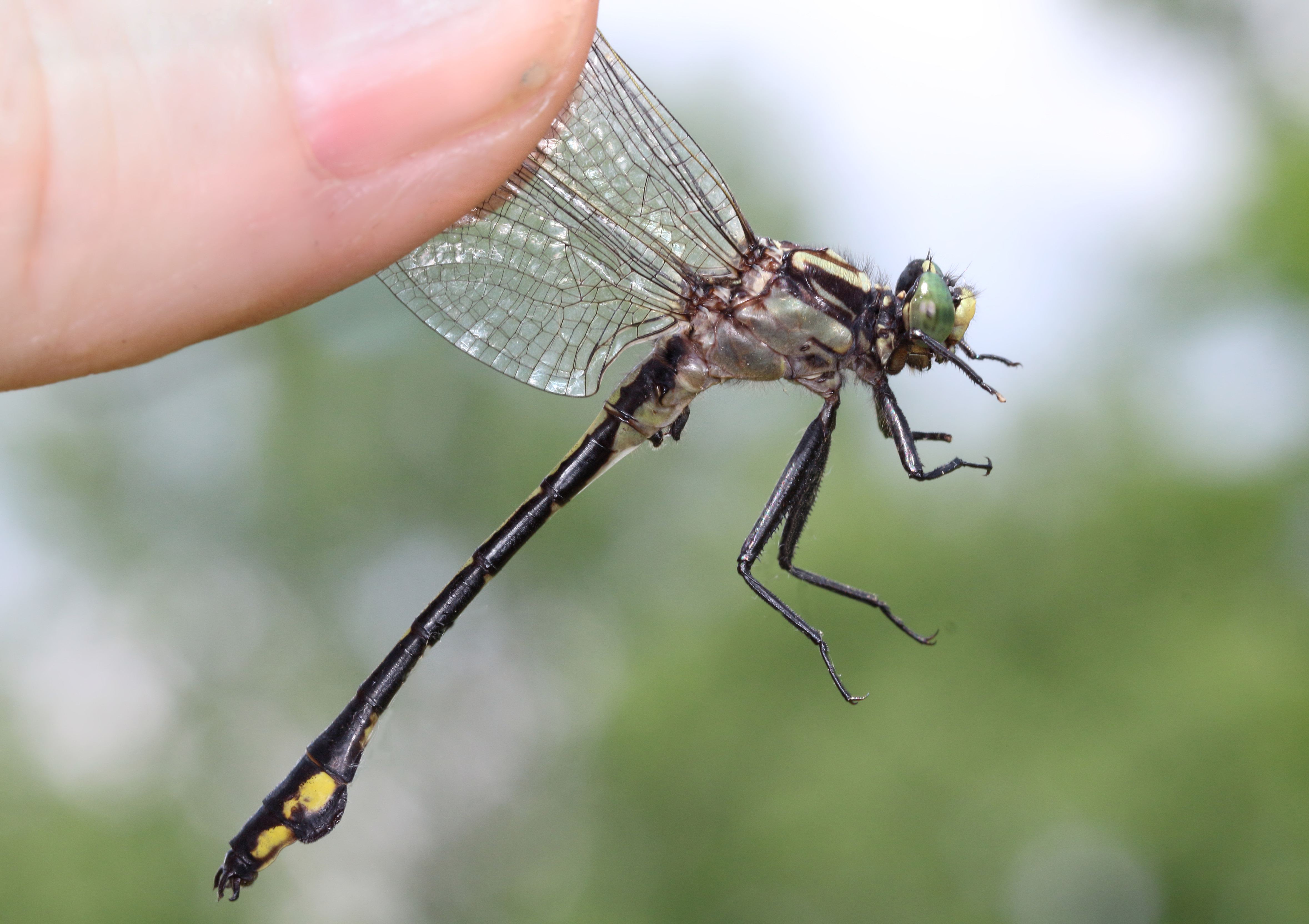 “Snaketails” are a group of clubtails that tend to have a lot of green and brown coloration instead of the yellow and black markings of other clubtails. There are two species in this field, and here is the more common one: the rusty snaketail (Ophiogomphus rupinsulensis).  The 2nd species is a tiny dragonfly called the pygmy snaketail, but it is very rare in my area and I have yet to even see one. 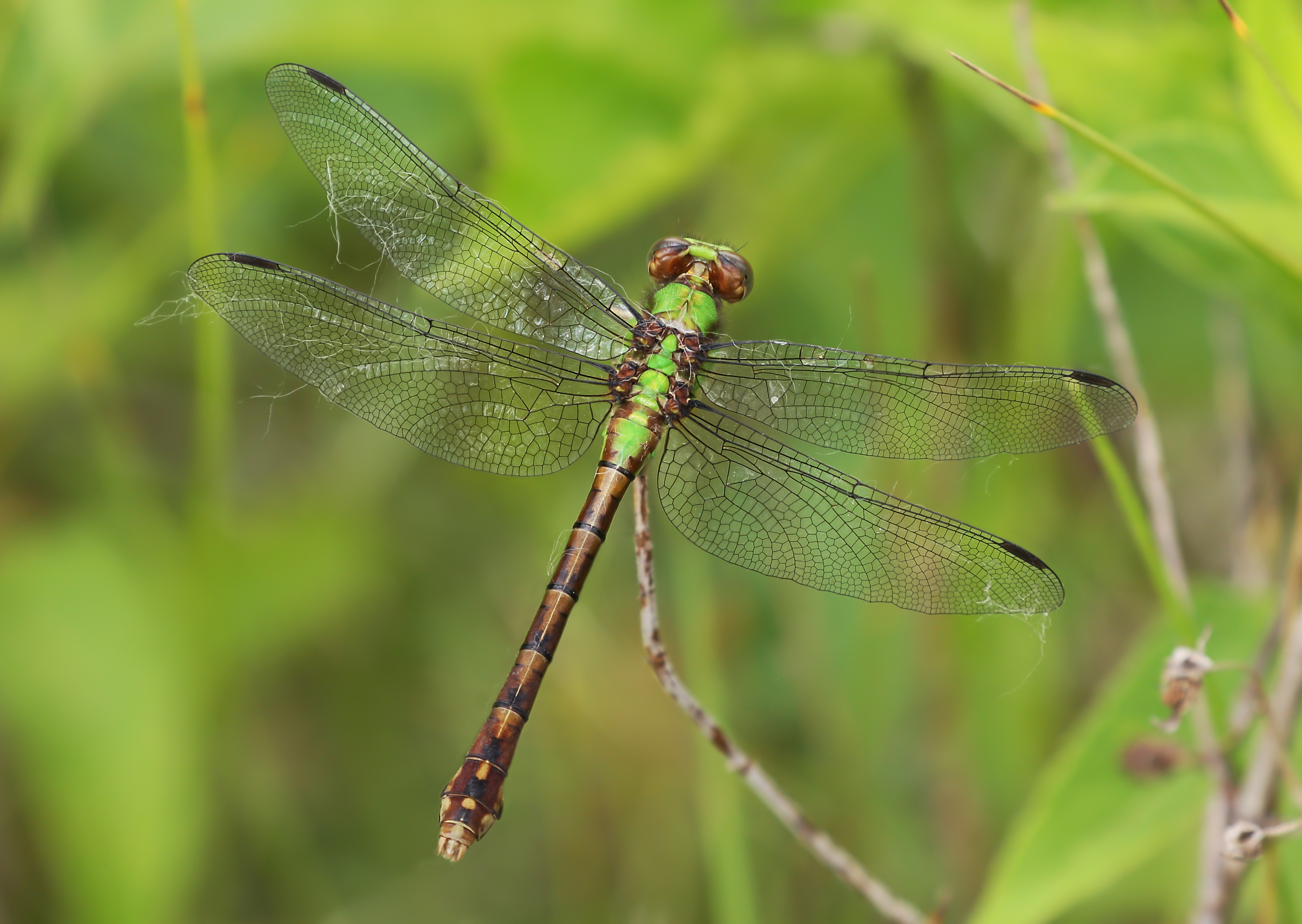 Spiketail dragonflies (family Cordulegastridae) seem similar to clubtails in that they have yellow and black markings. Their common name refers to the stinger-like ovipositor that females use for laying eggs in the sand, and you can see that in the linked picture. Spiketails behave quite differently from other clubtails in that they fly for very long periods, while most clubtails are outright lazy in comparison. Spiketails are associated with forests, staying close to the clean woodland streams in which they breed.

The scuttlebutt online reports that one species, the spectacular arrowhead spiketail (Cordulegaster obliqua), may be found in my area along a particular woodland stream. So off I went, pretty much just to photograph this dragonfly. They were common, but all were males intent on continually patrolling the stream for females. After a couple long visits with no luck at seeing a single landing, I just had to just break down and catch one. So back to the car I went to retrieve a butterfly net. Back at the river I managed to catch one (first try!), and here it is. In the 2ndpicture you can see why they are called arrowheadspiketails. Of course he was released afterwards. 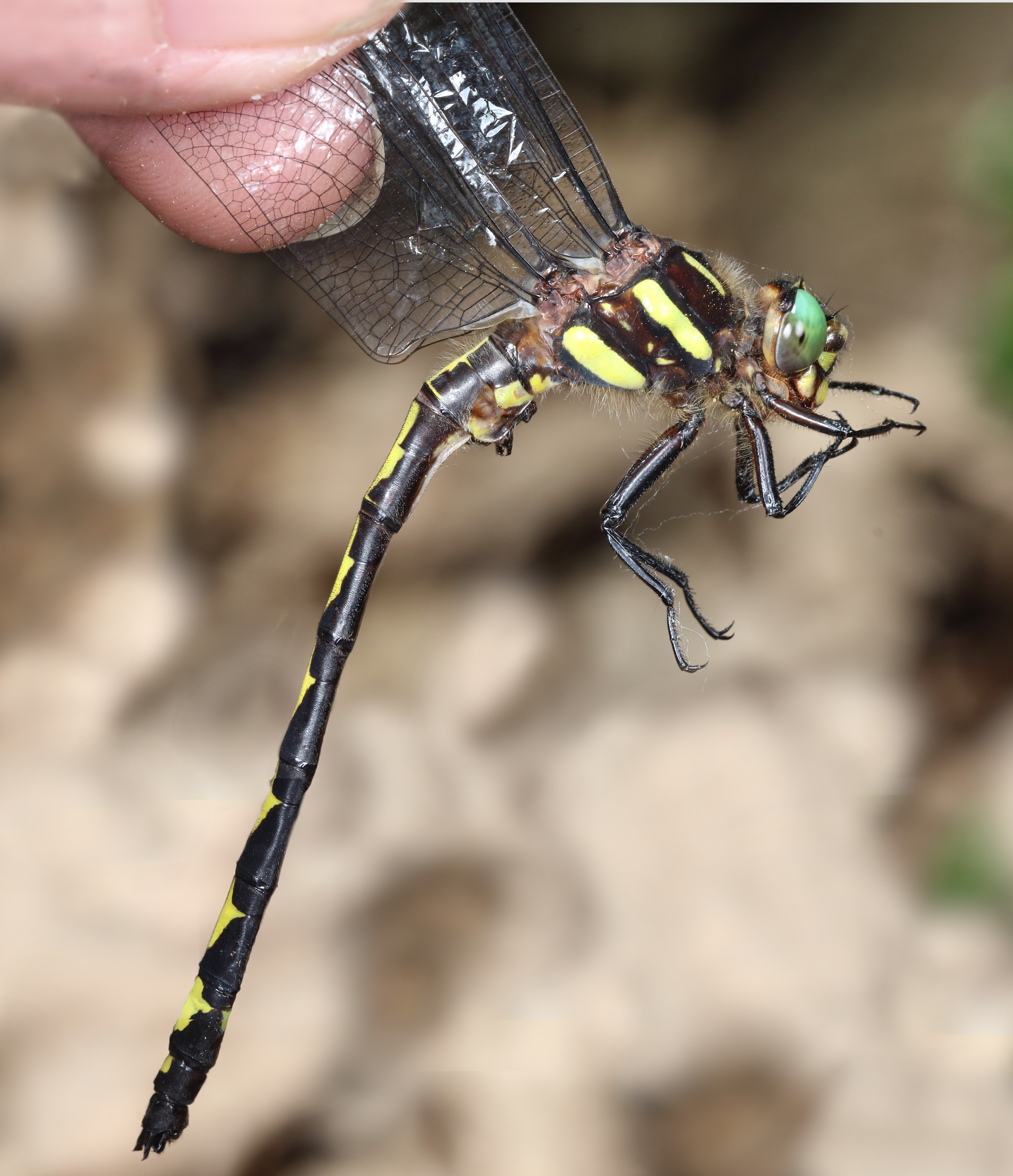 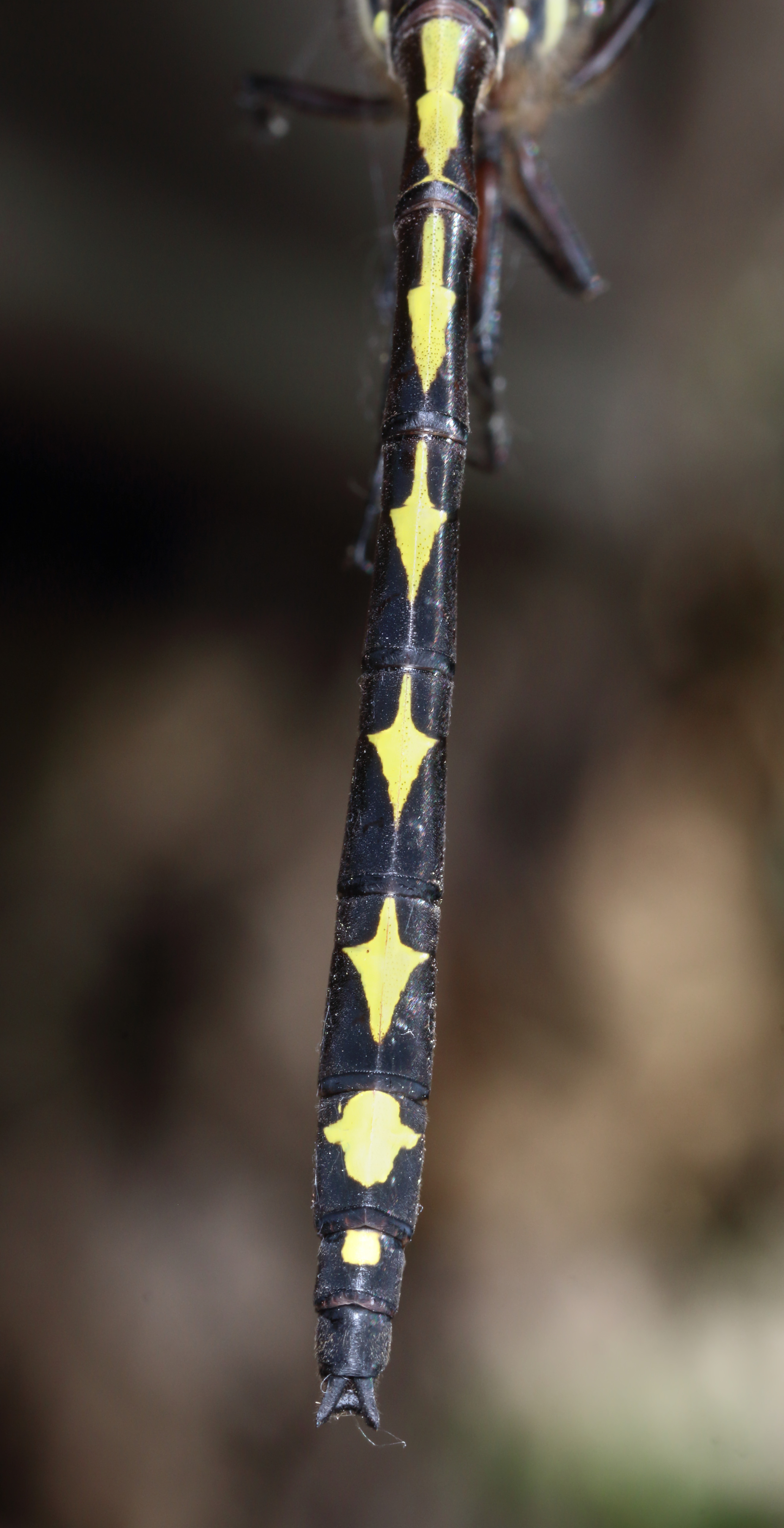 Darner dragonflies (family Aeshnidae) are next. First is what I believe might be a lance-tipped darner (Aeshna constricta). This is one of the “mosaic” darner species that tend to look quite similar to each other, so I am often not sure of their ID. Whatever it is, this is a female. 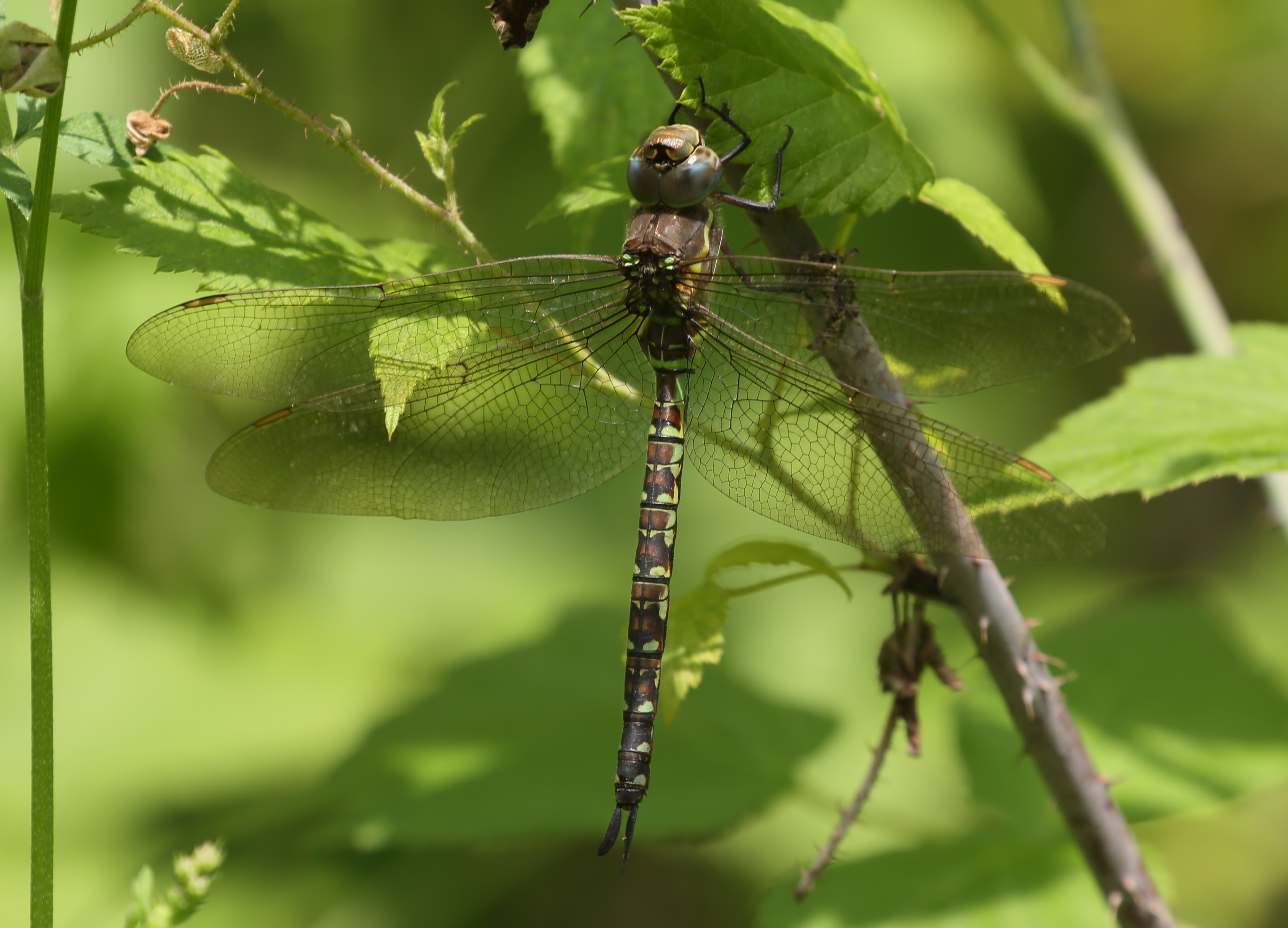 The second darner is unmistakable. This is a male fawn darner (Boyeria vinosa) that surprised me at the end of a long day in the woods by flying up from behind and landing right in front of me. Fawn darners spend much of the day roosting in foliage, becoming active later in the afternoon where they continue to fly through sunset and even until it gets quite dark. So they are semi-nocturnal dragonflies. Fawn darners have a distinctly wimpy and fluttery flight when they are just on patrol, but when they see something to chase they suddenly become as nimble as any dragonfly. By happenstance, the linked picture includes an interesting story about extremely tiny wasps that parasitize dragonfly eggs. I had no idea about those! 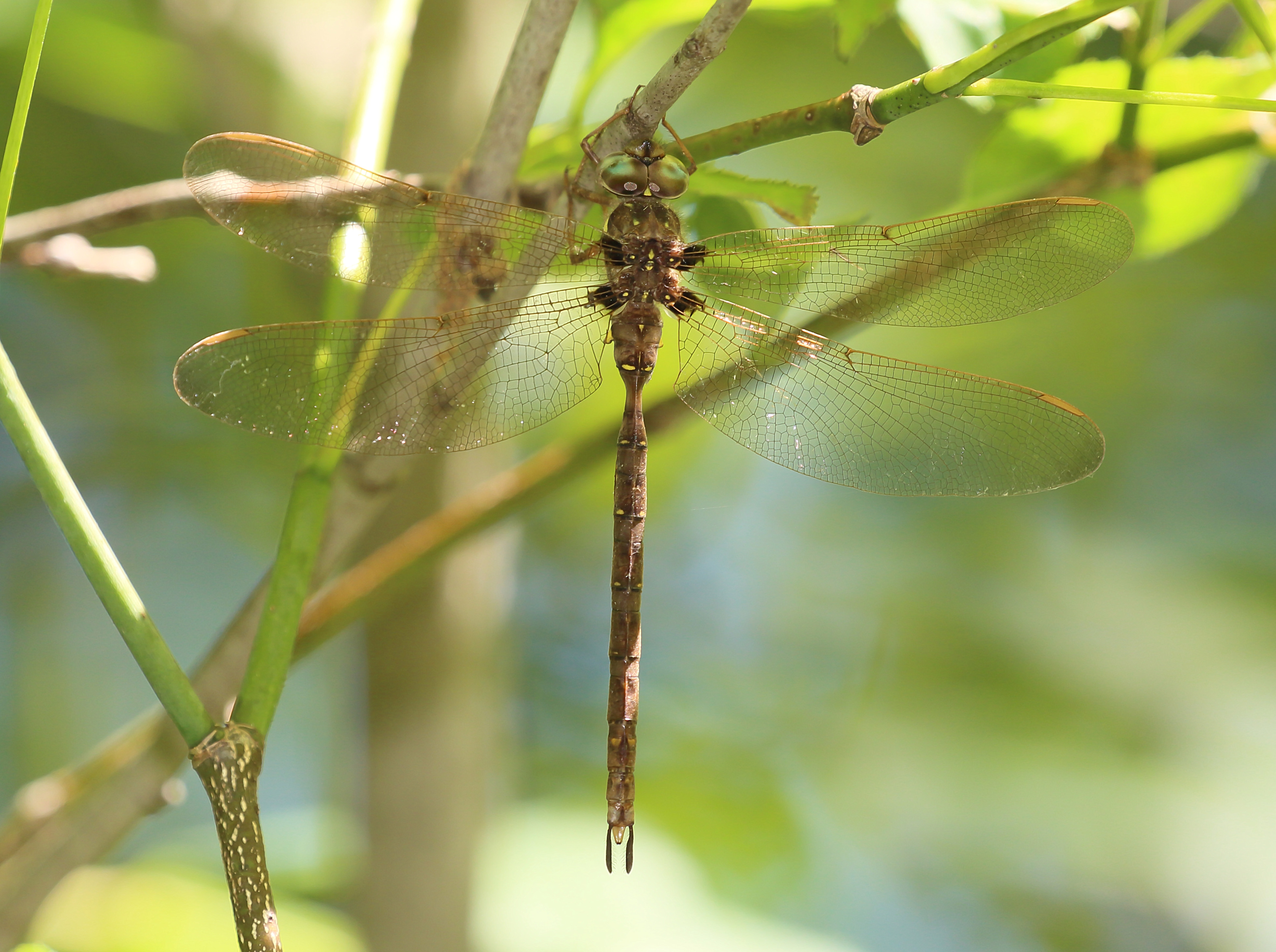 The next picture is something new for me. I’ve been wanting to photograph aquatic insects, so I built a kind of glass bottomed tray out of a picture frame. This was used here for the first time to photograph a young dragonfly “naiad”, which is the term for their aquatic stage. An online friend told me that this is one of the baskettail dragonflies (family Corduliidae). The common name refers to how adult females will carry an egg mass, clasped with appendages at the tip of their abdomen. 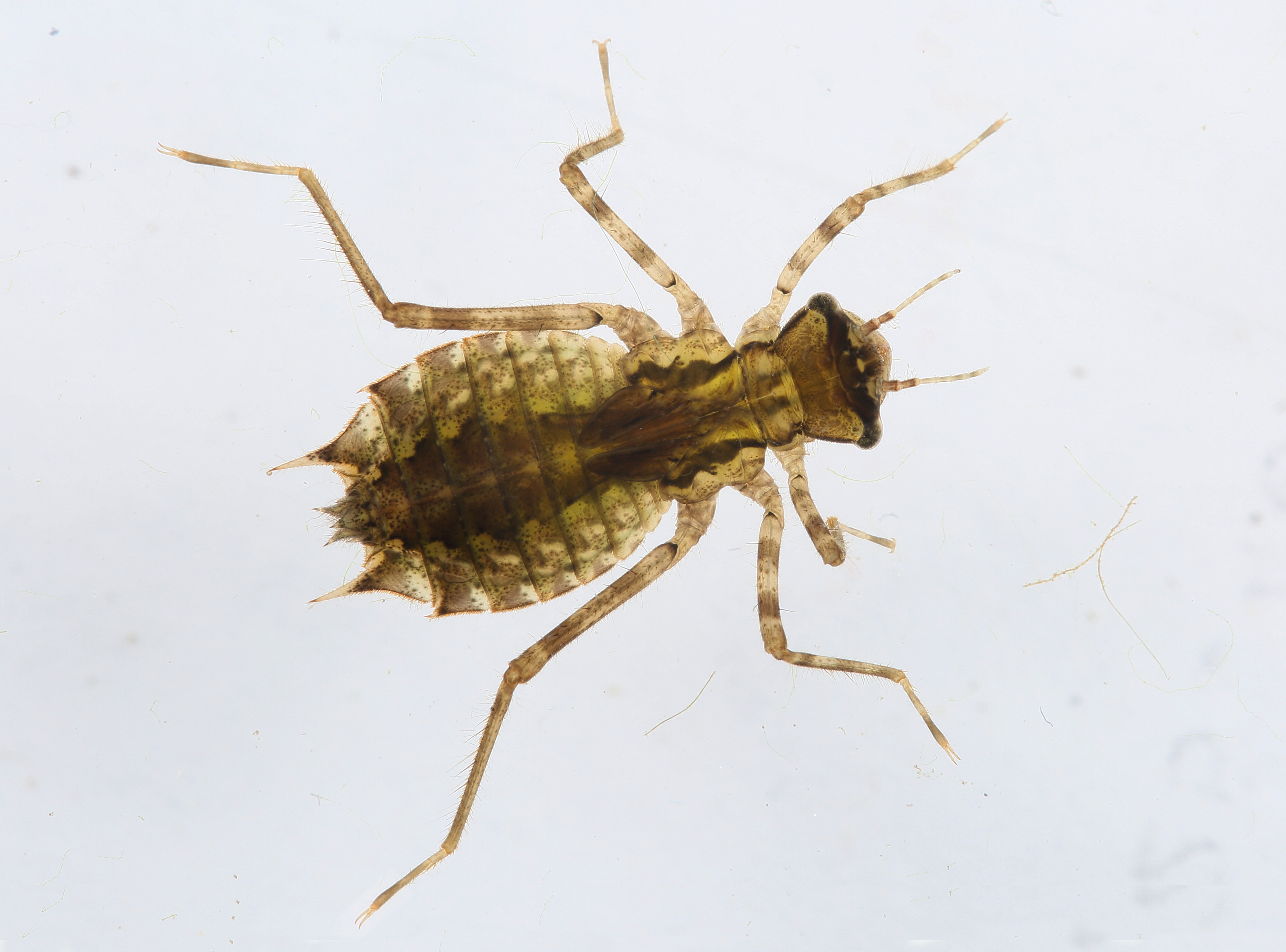 And finally, the last stop in Dragontowne shows a male widow skimmer (Libellula luctuosa) — a member of the skimmer family once again. I just like the composition and memories of hot summer days that it brings. 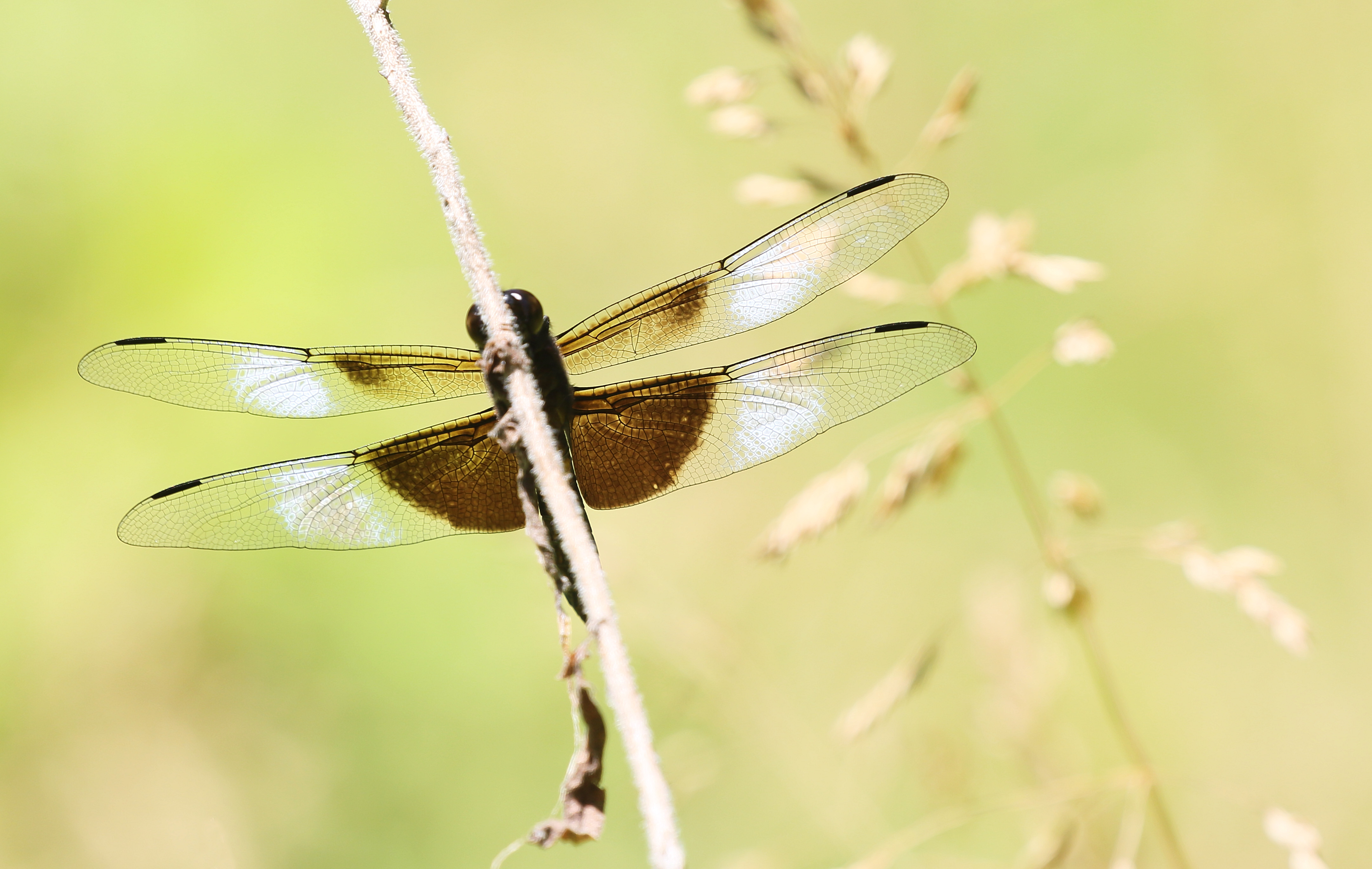