Today we have some exotic travel photography by reader Stephen Warren. His notes are indented, and you can enlarge the photos by clicking on them:

Some nature pics from deep in the Mauritanian desert, earlier this month.

We took 11 camels carrying water, tents, mattresses, and food including (look away now if you are squeamish) a live goat. Everyone walked, including the chameliers (camel drivers), and it was good hard exercise in the dunes. Here the caravan sets off: 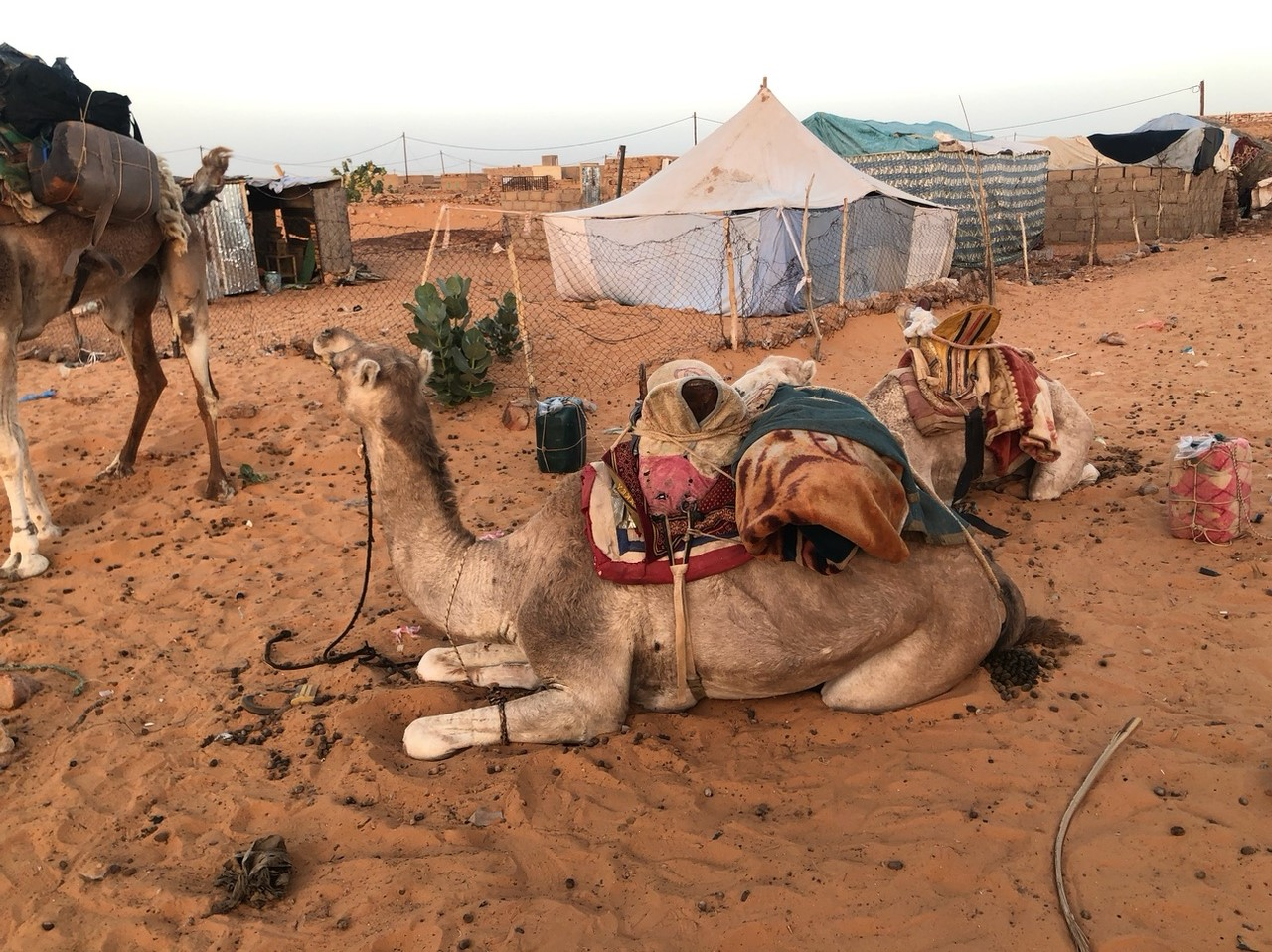 Camp pitched on day 1. This is the main tent, the sleeping quarters for the guide, cook and 4 chameliers. The camels (two in the background) are free to roam, to feed, but are hobbled and don’t wander far from the camp: 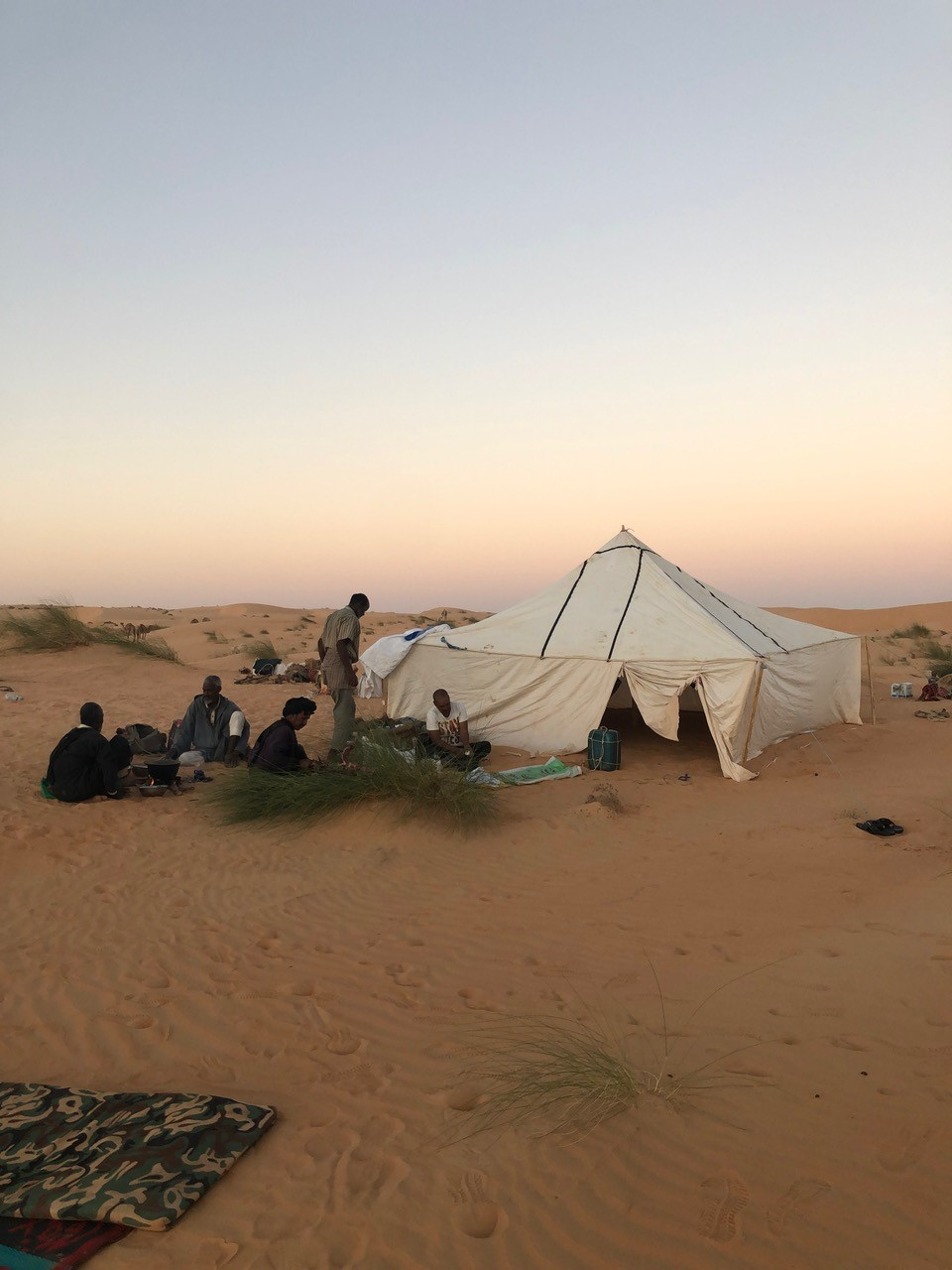 Here you see Limam, one of the chameliers. In the background you see the `sand sea’, the high dunes up to 40 or 50m high. Forget fancy desert boots. The chameliers are the experts and they wear cheap flipflops. The idiot intrepid adventurers instead spent a great deal of time emptying sand from their shoes and socks: 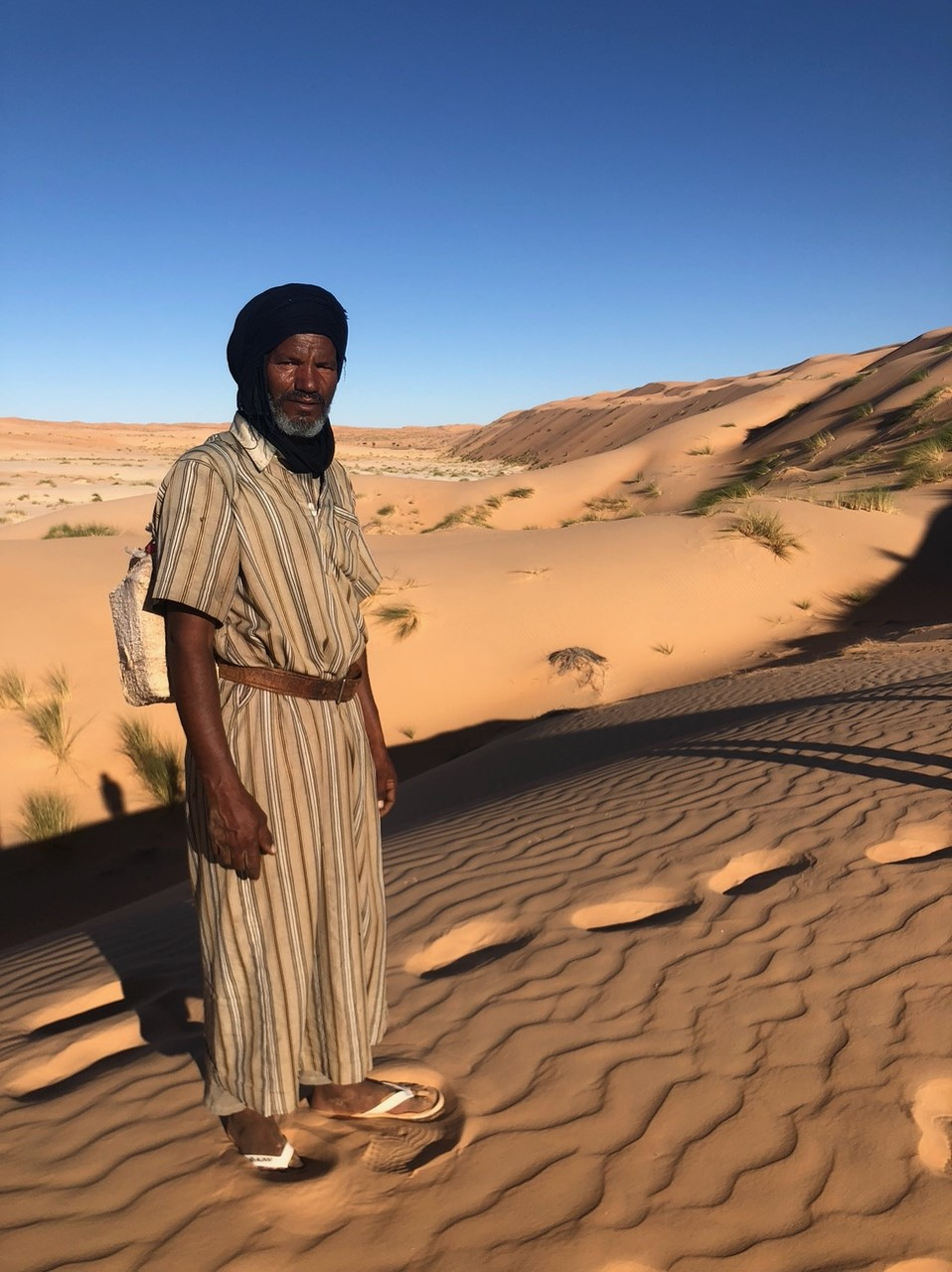 A closeup of the same large dune. This is the leeward side, looking N, the persistent wind direction being E to W. So on the leeward side the blown sand falls at the critical slope, set by the inter-grain coefficient of friction (the slope is gentler on the windward side). The dunes are about 1km across and repeat in waves. The greenery, ’sbot’, is the camels preferred food, and was abundant for our trip due to unusually heavy rain in October. The tree is an acacia: 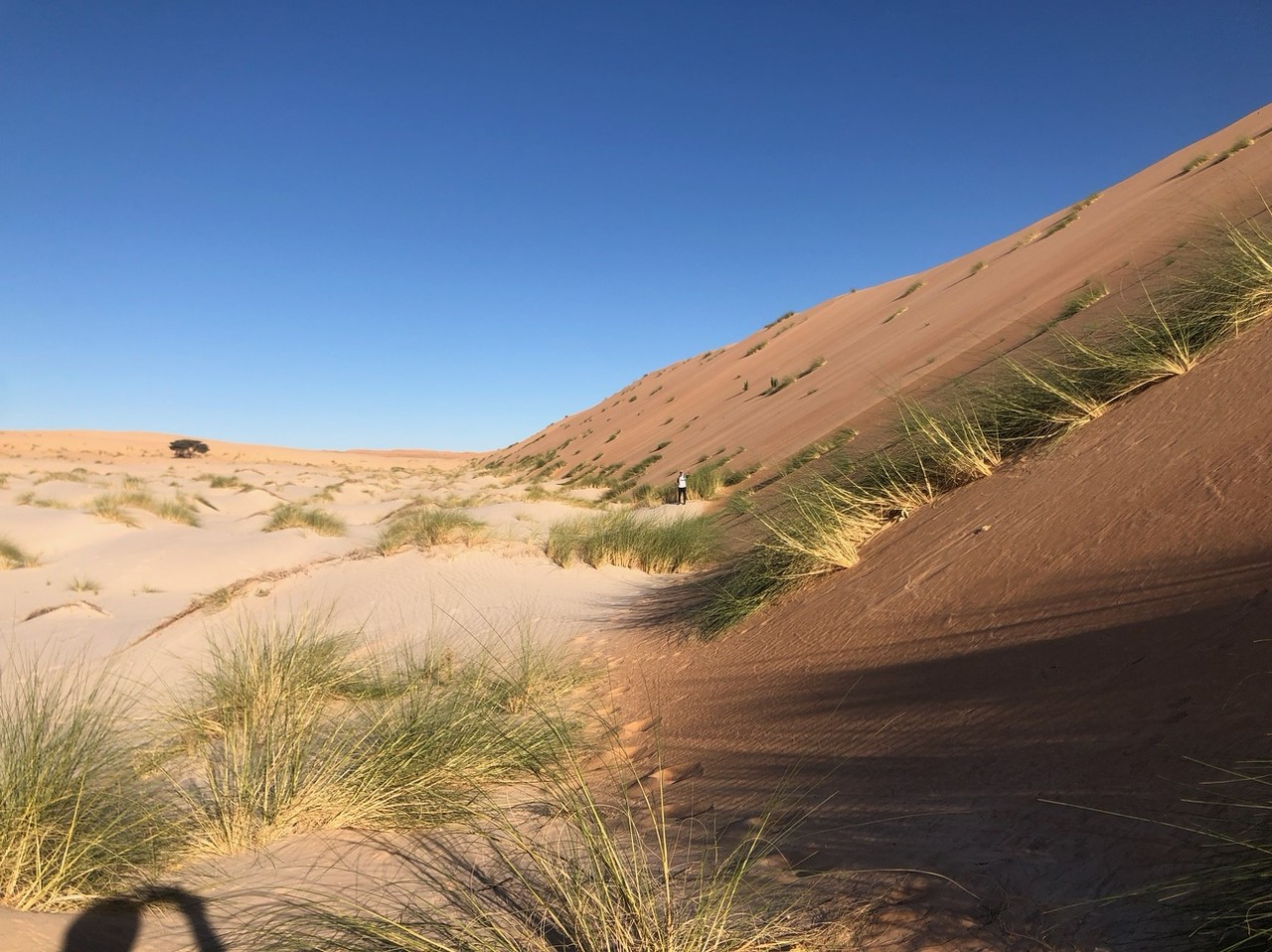 The wind creates beautiful patterns in the sand: 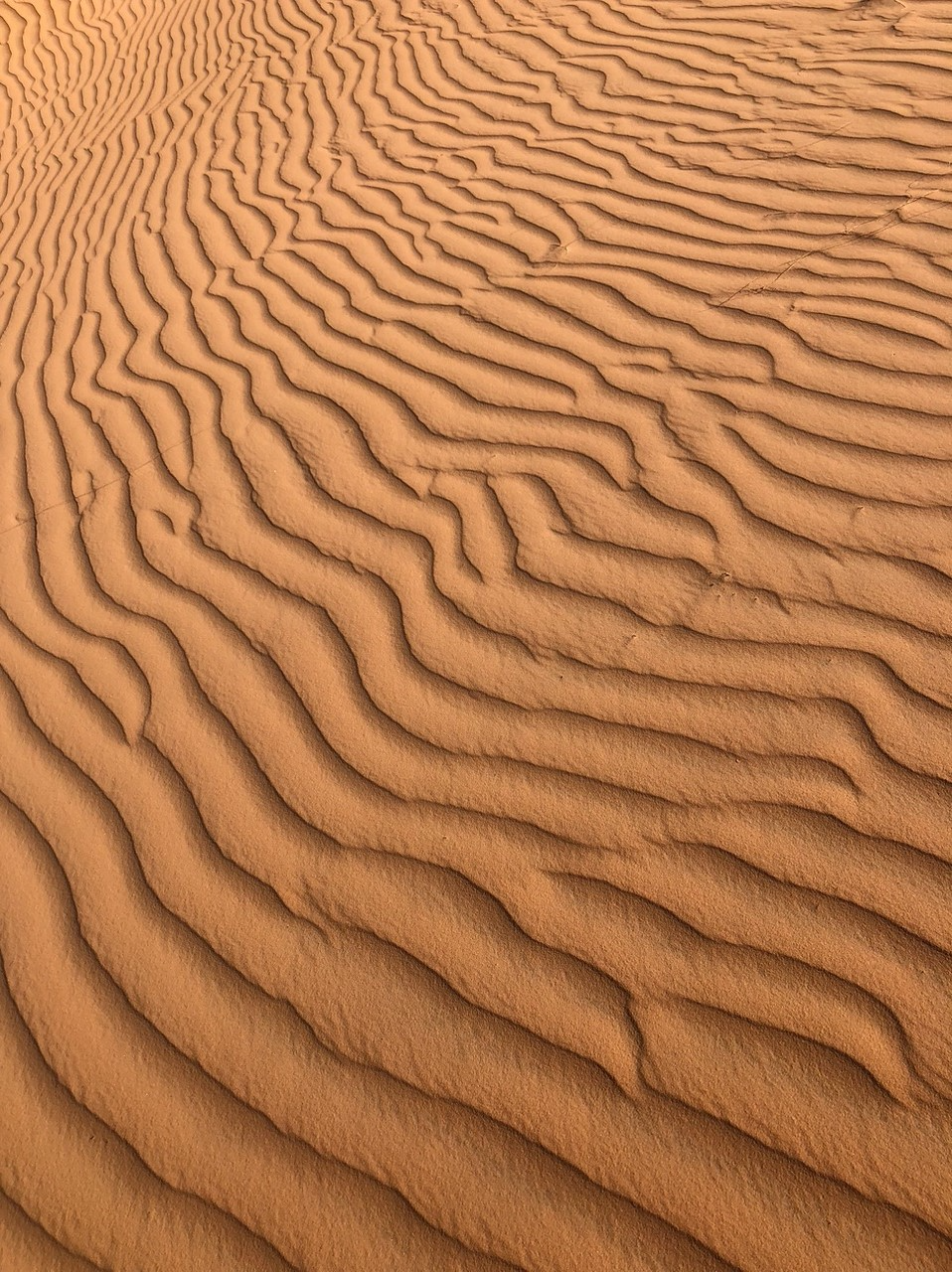 . . . which are then marked by tracks from a variety of wildlife including fox, hare, gerbil, snake, lizard, scorpion, and beetle. We saw all of these creatures except gerbil and snake, but we did see their tracks. Here is a wonderful array of tracks, dominated by scarab beetles: 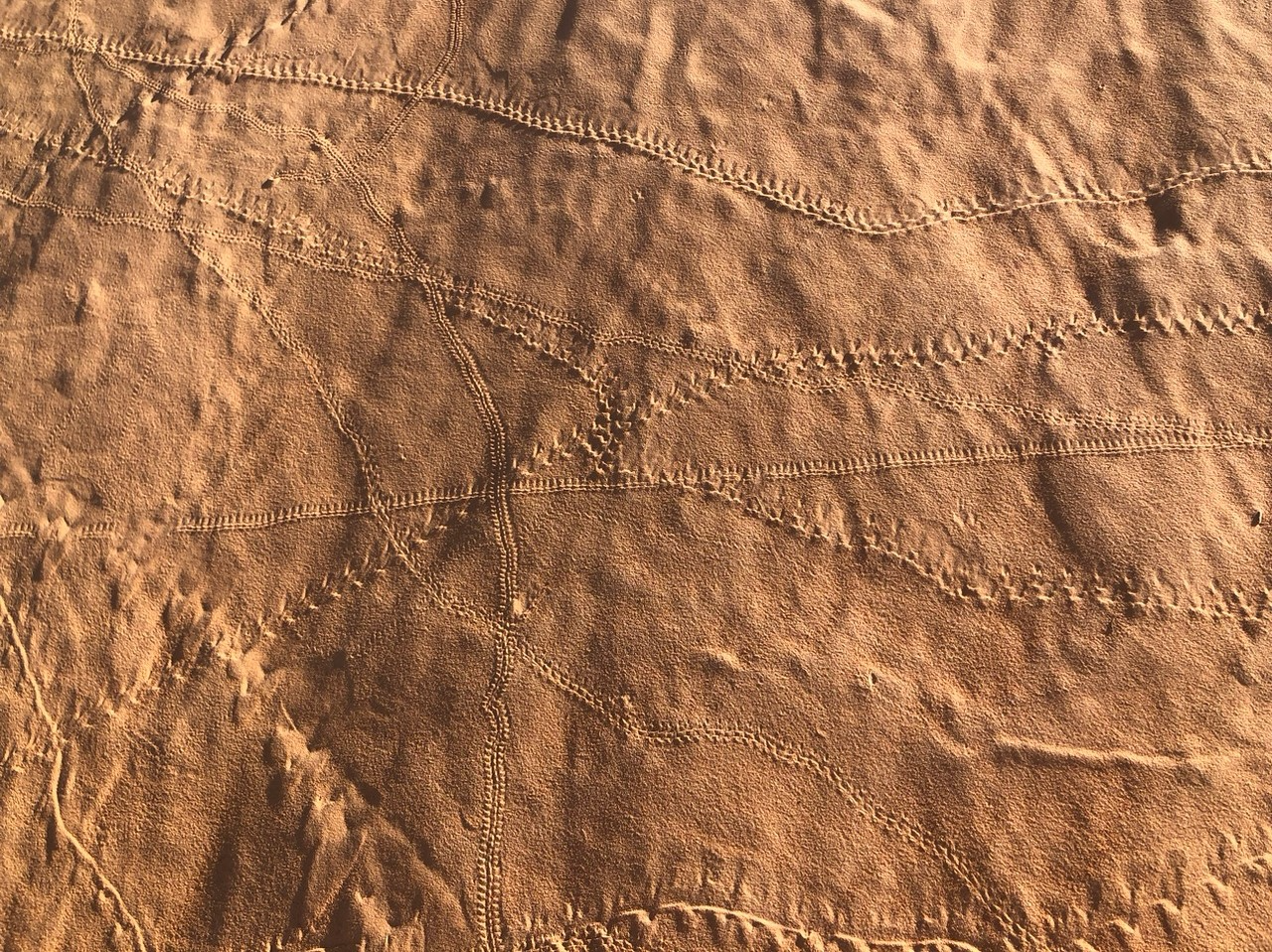 The next one is from a gerbil. I’m guessing that because they jump, the rear paws are the two separate  paws, and the front (leading in landing) paws are the two together, but I didn’t see it in action: 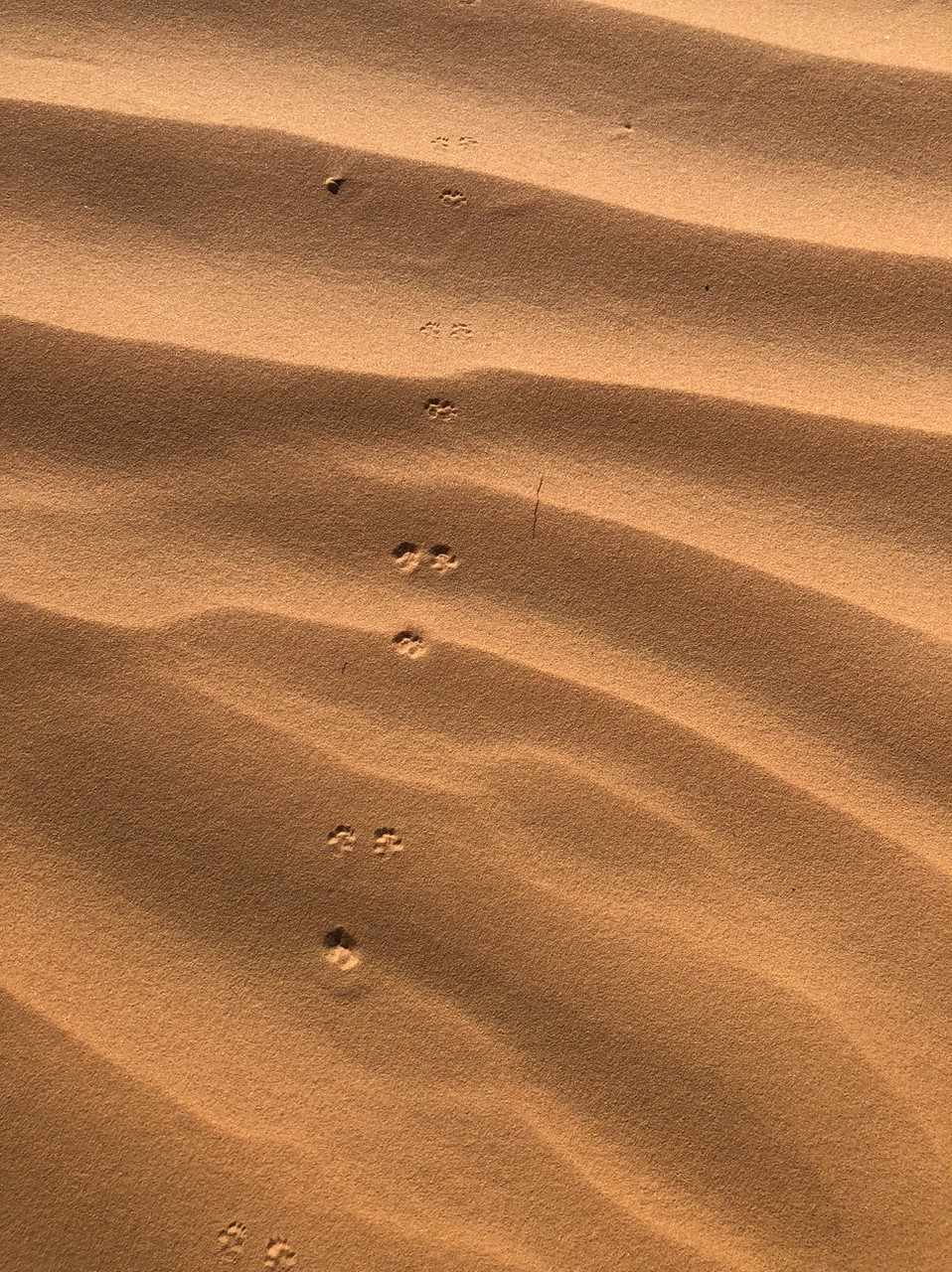 Lizard prints: running on the left, then stopping, turning and walking on the right, trailing its tail: 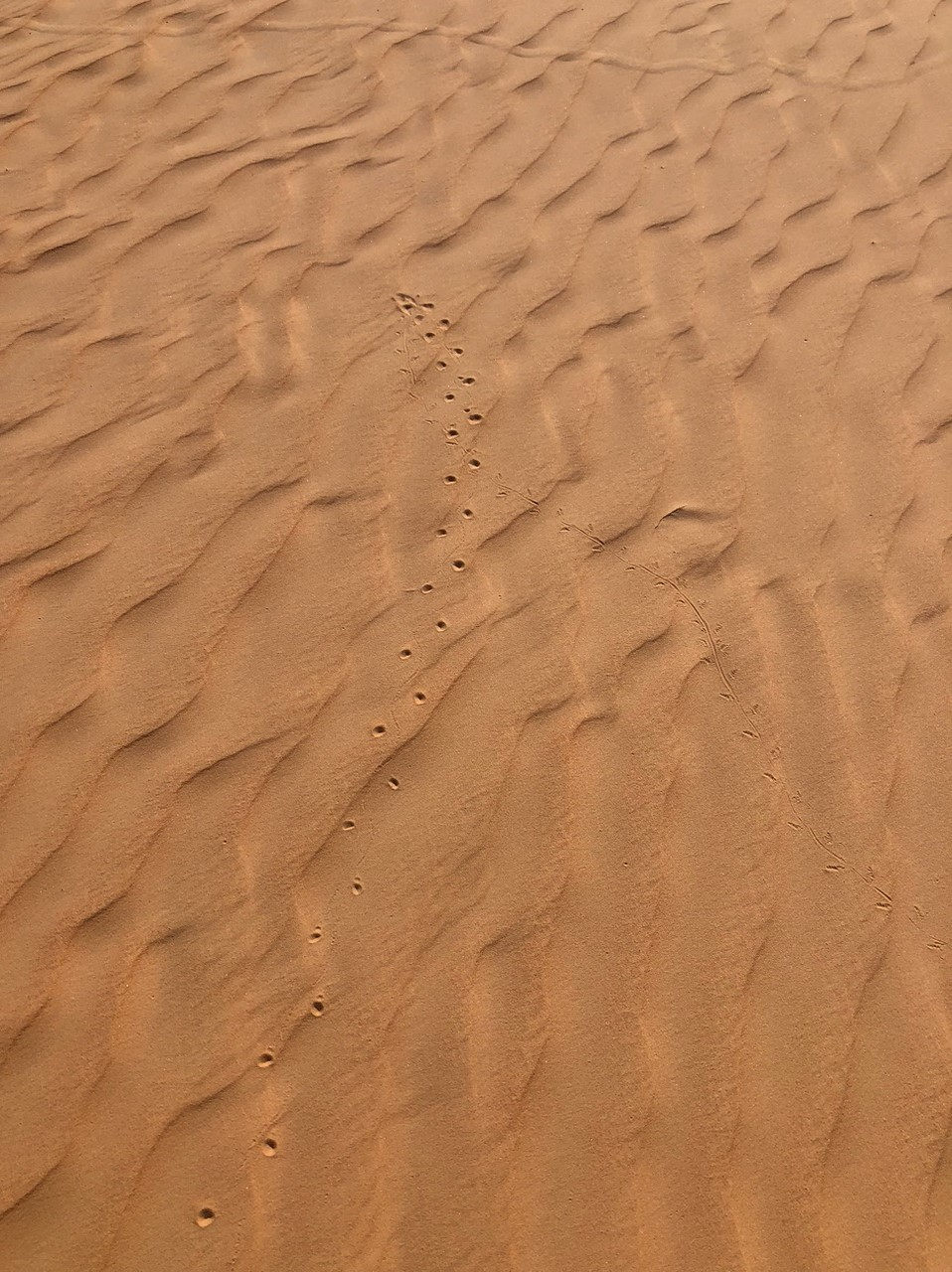 Here are the intrepid explorers in a scene reminiscent of Tintin in The Crab with the Golden Claws: 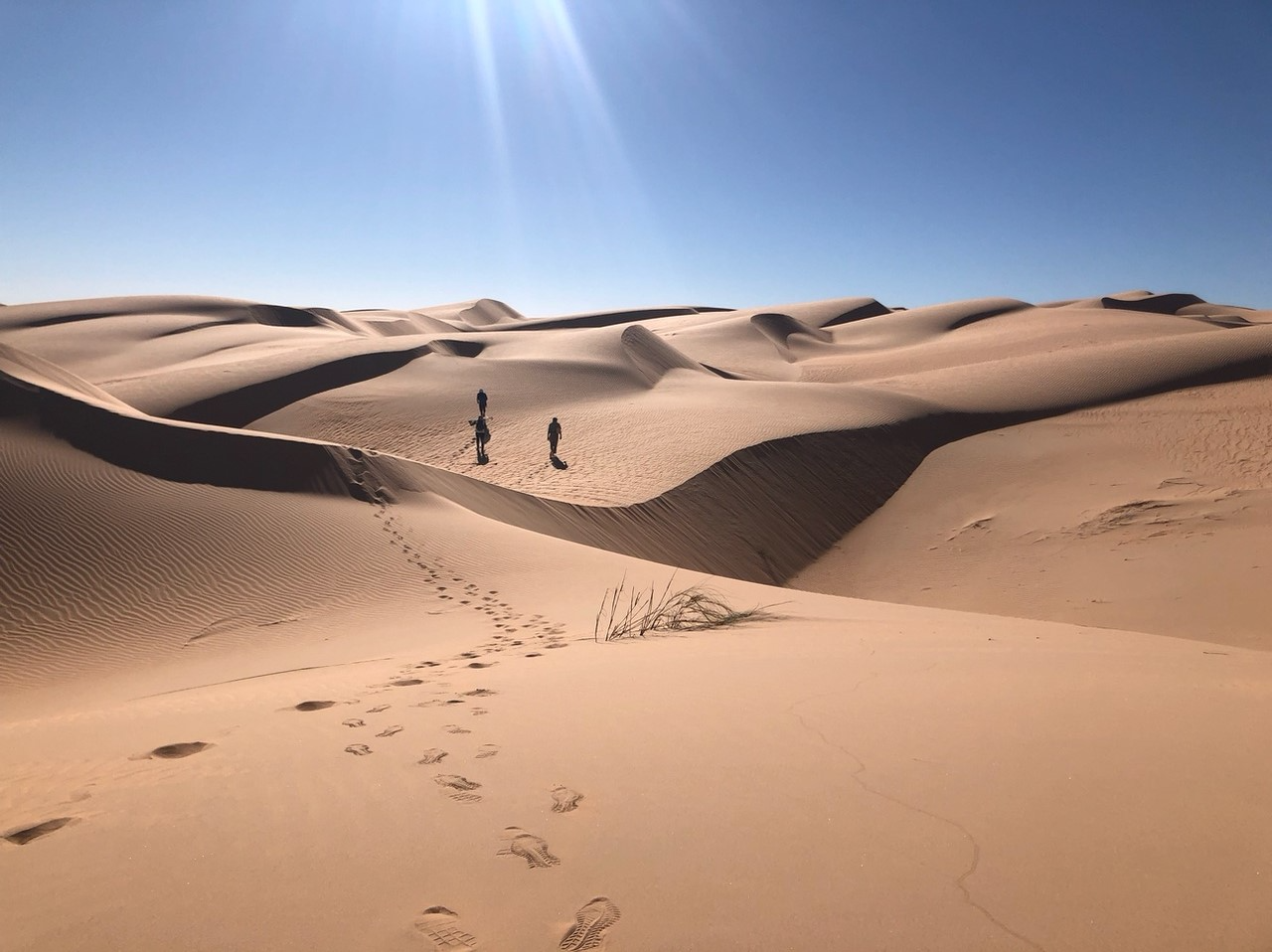 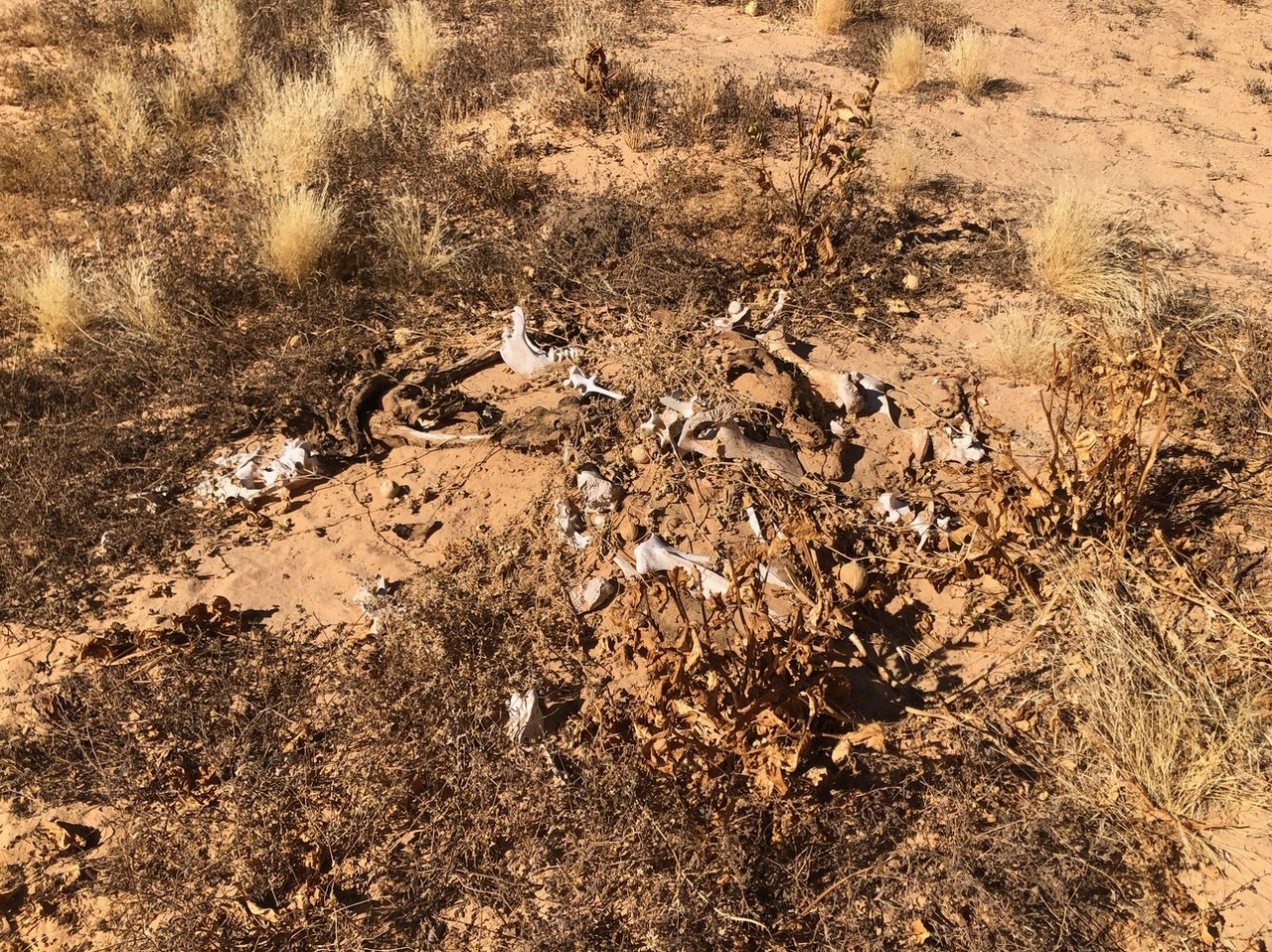 Finally, treasures found in the desert. The region was populated by humans until about 6000y ago and there is debris from this civilisation everywhere to be found. On the left, firstly 3 arrow heads, and below that two scrapers, perhaps for separating hide from flesh. The ends are filed to a sharp edge. The material looks like a type of chert.Top right is a small meteorite I found, a chondrite. The desert is a great place to look for meteorites. Below that are what appear to be two fossilised eggs that we bought from a chamelier – any ideas, readers? They are about 5cm long and are perhaps from a small dinosaur. I have sent a photo to the Natural History Museum in London asking for help in identification. The bottom white item is a piece of ostrich egg shell. This is a common find in the region suggesting that ostriches were farmed in those times: 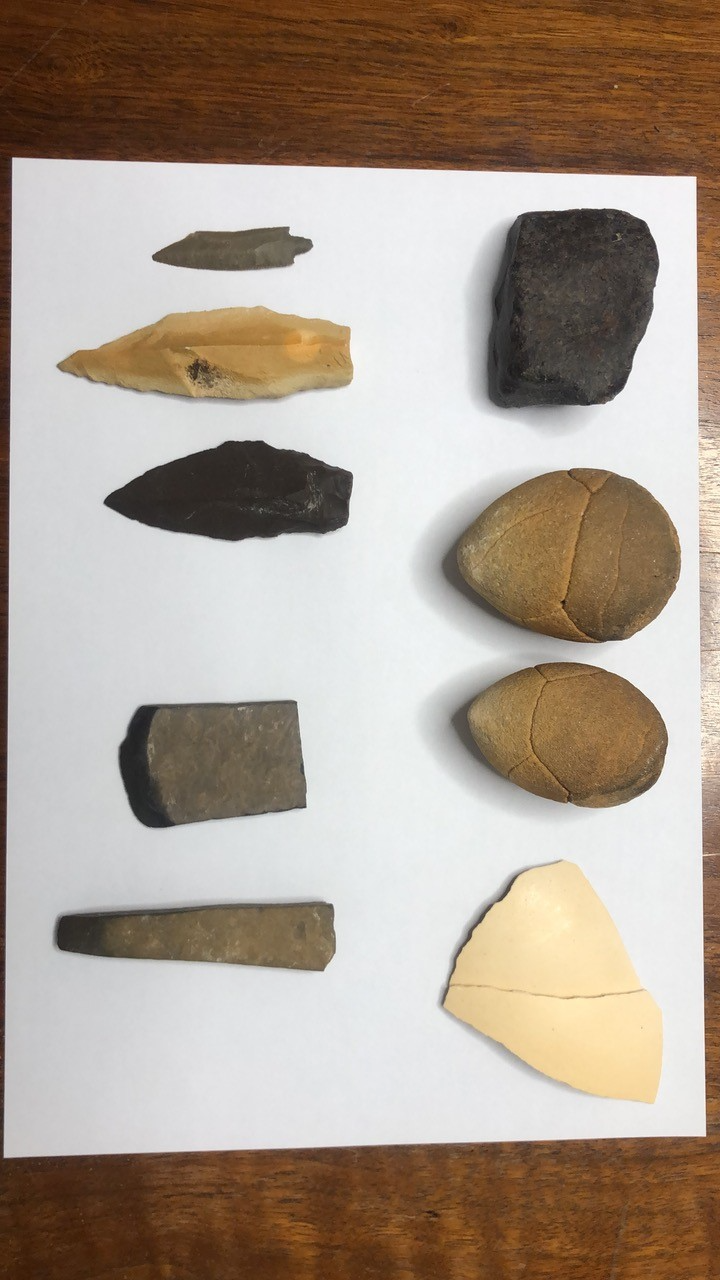