Why would you want to train a cat? Well, the article below from SCIENCEalert (click title to read) gives you several reasons why specific training is needed:

In a rehoming shelter, for example, training can be a useful tool to increase a cat’s exploratory behaviors, positive reactions to people, and maybe even their chances of being adopted.

At home, we can use simple techniques to help cats with things like feeling comfortable in a cat carrier, getting used to car journeys, as well as tolerating being groomed and receiving basic health examinations and treatments. Such training can also help cats cope better with visits to the vet. 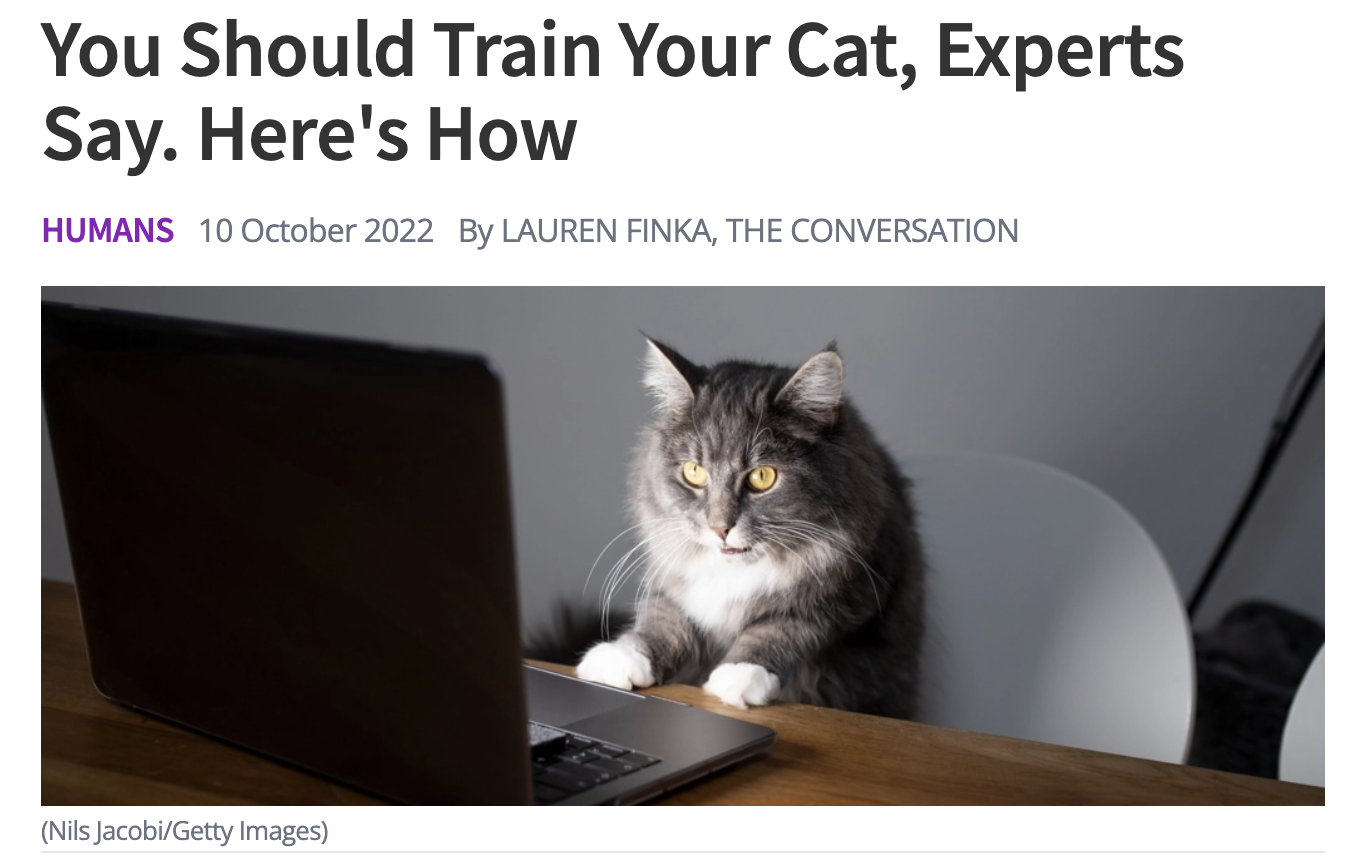 This edition teaches you how to train cats to not be afraid of their cat carrier when they need to go to the vet. This is, I know, a common issue. Here’s the intro, which they follow with

Cats are not born with an innate affinity towards humans and must be exposed to gentle, warm handling from two weeks old so they can learn we are friend rather than foe.

There is limited evidence that younger cats are more attentive to our social cues, which could mean they are more amenable to training. Kittens should also be played with using cat wands or fishing rod toys so that they learn not to attack our hands or feet.

Punishments such as shouting, rough handling, or using a water spray can induce stress and compromise the quality of owner-cat relationships.

Always use positive reinforcement (such as treats and praise). This is not only the most effective way to train pets, but it’s also better for their wellbeing.

Reward-based techniques can be an excellent way to teach a cat to enter a carrier on their own or sit calmly whilst we deliver their flea treatment. Some very friendly food-motivated cats may enjoy being taught to give a high five, or to sit or spin.

But cats are often less motivated than dogs to pay attention to us, or do what we are asking, especially in situations where they don’t feel comfortable. These factors may explain the high drop-out rates in studies that involve training cats to attend to human social cues.

It’s important that we make sure the cat is somewhere they feel at ease when we undertake any training with them. Always ensure the cat has the option to walk away or end the session when they want and try to give them a break if they seem uncomfortable.

Signs to look for include the cat turning their head away, nose licking, head shaking, a raised paw, sudden bouts of self-grooming, looking hunched or tense, a twitching or thumping tail, and rotated or flattened ears.

Here’s how to teach your cat enter a carrier and settle in five easy steps:

Then read the advice, which is very good, about getting Fluffy to the vet.

A reader sent me this trailer for a film that you can rent from Netflix.

I watched this last night on Netflix.You must watch it! If any of your guests have Netflix, try to see it. It’s not long but is remarkable. Right up your alley!!!

Here’s the entry at IMDb [the internet movie database]

Rotten Tomatoes gives it a 75% audience rating, but there is no critics’ rating.

Here’s the official trailer, suitable for Christmas viewing with your ailurophilic family. if you like it, you can join Netflix here. But how DARE they charge you money to learn about cats?

And a longer report which has a short segment from the trailer but then an interview with the director, Andy Mitchell:

The Pallas’s Cat is my favorite of all wild felids. It’s cute, fluffy, and you just want to pick one up and squeeze it. But since they’re wild, that’s not advisable, though my old copy of Wild Cats of the World says this:

According to Stroganov, Pallas’s cat remains wild and vicious in captivity, yet a specimen from Ladak kept by Colonel A. E. Ward became very tame, though it always dislike strangers. There have been reports of Pallas’s cats being kept in a semi-domestic state in parts of Central Asia “They differ in many ways from the domestic cat,” Pallas wrote, but they like to mate with him.

I wonder if the hybrids are fertile. If they were, well, then they could develop a domestic breed, just as they did with the Bengal cat.

A bit of info from Wikipedia:

The Pallas’s cat (Otocolobus manul), also known as the manul, is a small wild cat with long and dense light grey fur. Its rounded ears are set low on the sides of the head. Its head-and-body length ranges from 46 to 65 cm (18 to 26 in) with a 21 to 31 cm (8.3 to 12.2 in) long bushy tail. It is well camouflaged and adapted to the cold continental climate in its native range, which receives little rainfall and experiences a wide range of temperatures. The Pallas’s cat’s pupils are rounded, a unique feature among the Felinae.

The Pallas’s cat was first described in 1776 by Peter Simon Pallas, who observed it in the vicinity of Lake Baikal. In the early 19th century, it was reported to occur in Tibet, and in the Transcaspian Region in the early 20th century. To date, it has been recorded across a large areal extent, albeit in widely spaced sites in the Caucasus, Iranian Plateau, Hindu Kush, parts of the Himalayas, Tibetan Plateau, Altai-Sayan region and South Siberian Mountains. It inhabits rocky montane grasslands and shrublands, where the snow cover is below 15–20 cm (6–8 in). It finds shelter in rock crevices and burrows, and preys foremost on lagomorphs and rodents. The female gives birth to between two and six kittens in spring.

After that, of course, you’re going to want to see it, so here are a few films. The first is a three-minute job from the BBC, narrated by David Attenborough with rare video of this animal in the wild. Look at that coat!

Here’s a 4.5 minute National Geographic video about a quest to see the cat on the Tibetan Plateau. The round pupils are especially evident in this video.

I’ve saved the adorable kittens for last. They look like dust bunnies, but check out the relative size of those paws!  These are from the Novosibirsk Zoo in Russia:

And the cover of a recent PNAS (the article is here).

Lagniappe: The best moments of Larry the Cat, Chief Mouser to the Cabinet Office since 2011. The footage includes a face-off with Larry’s nemesis Palmerston, formerly the Chief Mouser of the Foreign & Commonwealth Office (FCO) at Whitehall in London (now retired).

6 thoughts on “Caturday felid trifecta: How to train a cat; inside the mind of a cat; Pallas’ cats; and lagniappe”