John Mark Hansen is, according to the University of Chicago website, “the Charles L. Hutchinson Distinguished Service Professor in the Department of Political Science and the College. He is also one of the nation’s leading scholars of American politics.”  Yesterday I got an email from him with some local history about John T. Scopes, who as you know was the man tried for teaching human evolution in the 1925 “Monkey Trial” in Dayton, Tennessee.

As you may know, I did a historical guide to Hyde Park and Kenwood that came out right before Covid hit. I’ve been adding to it for a hoped second edition as I come across things. Here’s one that might interest you. Did you know Scopes was a student here? This story is not in the book but it has a lot more.

His book is called The City in A Garden, and you can find it here.

He sent me the proposed section about Scopes, and it had a lot of stuff in it that I didn’t know (I did know he was a U of C student, but that was about it). Here, then, John fills out the record on the estimable John Scopes (posted here with permission).  The addresses given are quite close to where I live in Hyde Park.

In May 1925, a grand jury in Dayton, Tennessee, indicted John T. Scopes for violating a state law forbidding the teaching of evolution. The American Civil Liberties Union, which had solicited a test of the law, engaged Clarence S. Darrow (1537 E. 60th) to lead the defense. Soon after, Darrow convened a group of experts from the University of Chicago to advise his team on issues of science and religion. Horatio Hackett Newman (PhD’05, 5712 Dorchester) was a professor in zoology and the author of Readings in Evolution, Genetics, and Eugenics (1921). Fay-Cooper Cole (5710 Blackstone) was a newly-tenured professor in anthropology and a writer of popular articles on human origins. Shailer Mathews (5736 Woodlawn) was a theologian, the dean of the Divinity School, a public lecturer on “The Contributions of Science to Religion,” and the editor of a book of the same title (1925), to which Newman had contributed a chapter on “Animal Evolution.” Darrow knew them as participants in a “biology group” that had met in his home for discussion for about ten years. Finding no lack of scientists eager to defend the theory of evolution, the defense’s roster quickly expanded to include Charles H. Judd (1320 E. 58th), a psychologist and the chair of the University’s education department, and Kirtley F. Mather, a Chicago native and alumnus of the University (PhD’15), then a professor of geology at Harvard, among several others. In the event, the judge in the case refused to allow Newman and his colleagues to testify, thwarting the defenders’ intention to put the premise of the law on trial. In July 1925, the jury convicted Scopes and fined him $100. The trial earned notoriety not only for Scopes and Darrow but also for their academic supporters. Back in Chicago, Professor Cole received a summons from Frederic Woodward, a law professor acting as president after the death of Ernest DeWitt Burton. Woodward showed him resolutions from a convention of southern Baptists condemning him, Newman, Judd, and Mathews for their participation in Scopes’s defense. Reading their objections, he began to laugh but Woodward caught him short. “Already we have had more demands for your removal than any other man who has been on our faculty,” Woodward told him. In fact, he continued, the resolutions had been discussed by the Board of Trustees. Suddenly sober, Cole asked about their response. Woodward handed him a piece of paper. “They had raised my salary,” Cole recounted decades later.

After the trial, Scopes was unemployed and unwelcome in Tennessee. After considering law school, he decided to enroll in the doctoral program in geology and paleontology at the University of Chicago. The scientists took up a collection to pay his first two years of tuition. Darrow and his wife Ruby met him at the Illinois Central station at 63rd and boarded him until he was able to rent a room on 63rd Street. Although preoccupied with his courses in geology, he told reporters he also hoped to audit H. H. Newman’s class, Zoology 101, “The Nature of the World and Man,” but he managed only to sit in on Fay-Cooper Cole’s lectures. For his work in the program, Scopes was elected to Kappa Epsilon Pi, the geology honorary society, and the science honorary society Sigma Xi. In the spring of his second year, as his funding came to an end, the department nominated him for a fellowship that would have enabled him to complete his doctoral studies but the president of the “well-known technical school” that administered it refused to consider the application. “As far as I am concerned,” he wrote Scopes, “you can take your atheistic marbles and play elsewhere.”

Scopes left the University and took a job with Gulf Oil in Venezuela. Three years later, having lost the job in the Depression, he returned (recently married) to finish his degree. His intended advisor, a paleontologist, had died in the meantime. He found a new supervisor, Edson S. Bastin (PhD’09), the department chair, and formulated a new research plan in economic geography. By the time he completed additional coursework and his fieldwork in New Mexico, however, “my Venezuela money [had] played out and with the end nearly in sight I had to stop and attend to needs more pressing than the quest for a doctoral degree.” Scopes never finished his doctorate. He worked the rest of his career as a geologist in the oil and gas industry, living in Shreveport, Louisiana.

In 1959, the University of Chicago convened a conference to mark the centennial of the publication of On the Origin of Species (and the sesquicentennial of Darwin’s birth). Twenty-five hundred scientists, scholars, educators, and journalists attended the five-day event in Mandel Hall, including the grandsons of Charles Darwin (also Charles) and T. H. Huxley (Julian). Of the Chicago participants in Scopes’s trial only Cole was still alive but he was retired in California. The chair of the conference committee, the anthropologist Sol Tax (5537 Woodlawn), invited Scopes to the proceedings but he demurred, still averse to publicity even three decades later. (The international conference concluded with a hometown production, the debut of “Time Will Tell,” a “musical satire” based on incidents from the life of Darwin, composed and written by Robert Ashenhurst (5624 Dorchester) and Robert Pollack (1312 E. 56th), a business school professor and an investment broker, respectively. Ric Riccardo, “The Singing Restauranteur,” played Darwin and Jo Anne Schlag (5810 Harper) his wife Emma.) In 1960, however, Scopes returned to the campus. He was the featured guest at the premiere of a 28-minute film produced by Encyclopædia Britannica to document the Origins centennial conference. After the screening, Scopes, three professors, the sales manager of the University of Chicago Press, and Tax as moderator participated in a roundtable discussion on the status of evolution in science teaching in the United States. The law against teaching evolution was still on the books in Tennessee, a participant pointed out, and Mississippi and Oregon besides. In other states, textbook publishers resorted to euphemisms to finesse the controversy surrounding the concept. Away from teaching and the academy for a third of a century, Scopes had little to add. “I hope that I don’t ever have to go through something like that again,” was all he would say about his experience in Dayton.

At the gravesite of Scopes and his wife, Paducah, Kentucky: 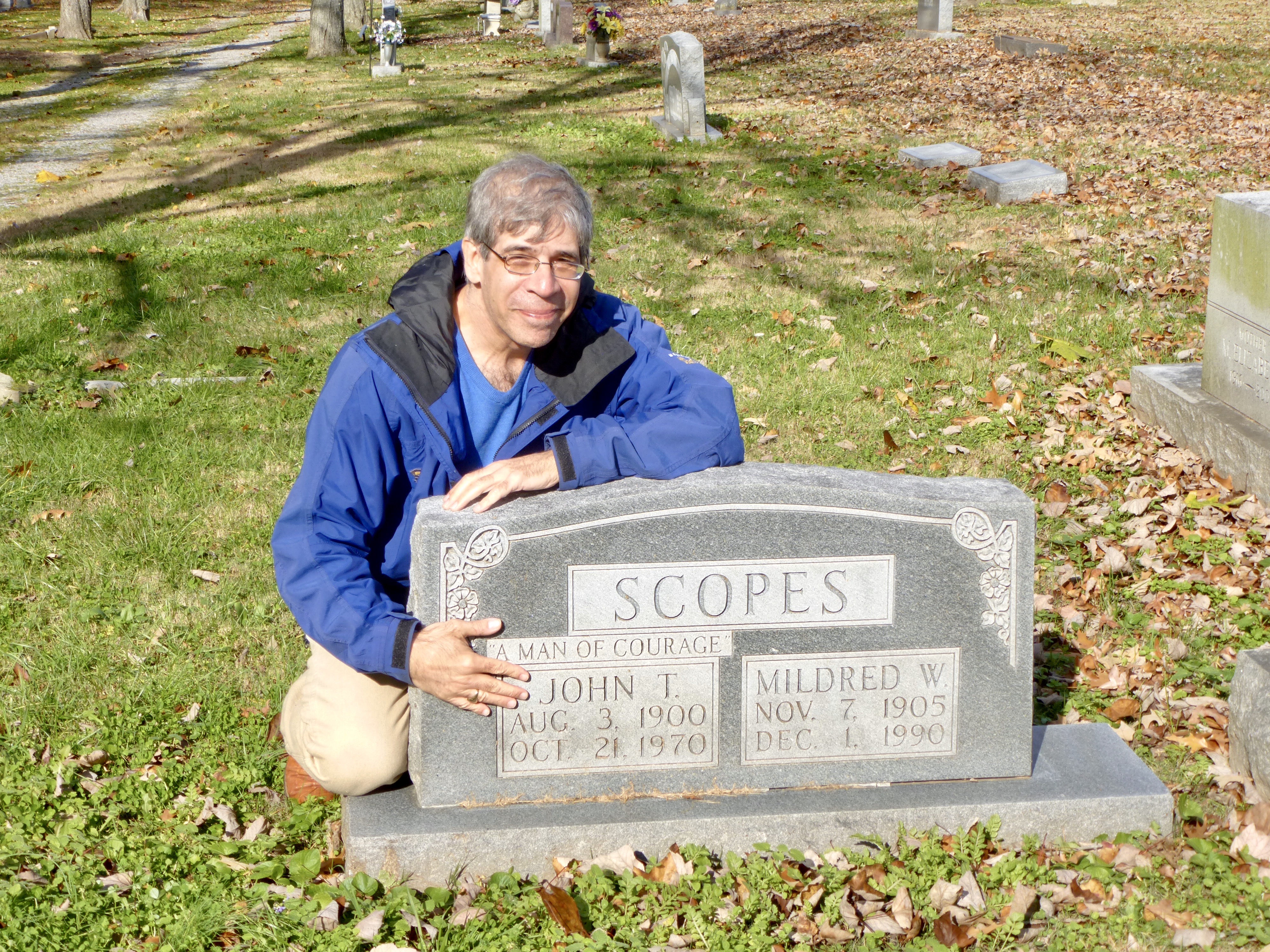 14 thoughts on “John Scopes and his University of Chicago connection”