The oldest DNA sequenced up to now was from a mammoth molar preserved in permafrost, and was dated about 1.2 million years ago. Now a group of scientists, excavating a 100-meter-thick layer of frozen soil in the “polar desert” of northern Greenland, not only found short stretches of DNA that identified the plants, animals, and algae present a long time ago, but also showed that that the time was at least two million years ago.

This is the oldest fossil DNA ever sequenced; it was preserved because it had been adsorbed to minerals in frozen soil. And although the stretches of DNA had degraded into short bits—about 50 base pairs long—they were sufficiently similar to modern taxa that they could identify the groups from which they came. In fact, they could reconstruct the whole ecosystem of that area 2 million years ago. It was much richer in flora and fauna than today’s polar desert, for at that time Greenland wasn’t covered with ice, it was much warmer (mean summer temperature about 10°C), and organisms could migrate to Greenland over land bridges. This might give us a hint of what kind of ecosystem could develop (minus the animals, which are largely gone) should global warming melt the ice presently in Greenland.

You can read the Nature paper for free by clicking on the screenshot below (the pdf is here, reference at the bottom). Below that is a clickable and short popular account of the findings, also published in Nature. 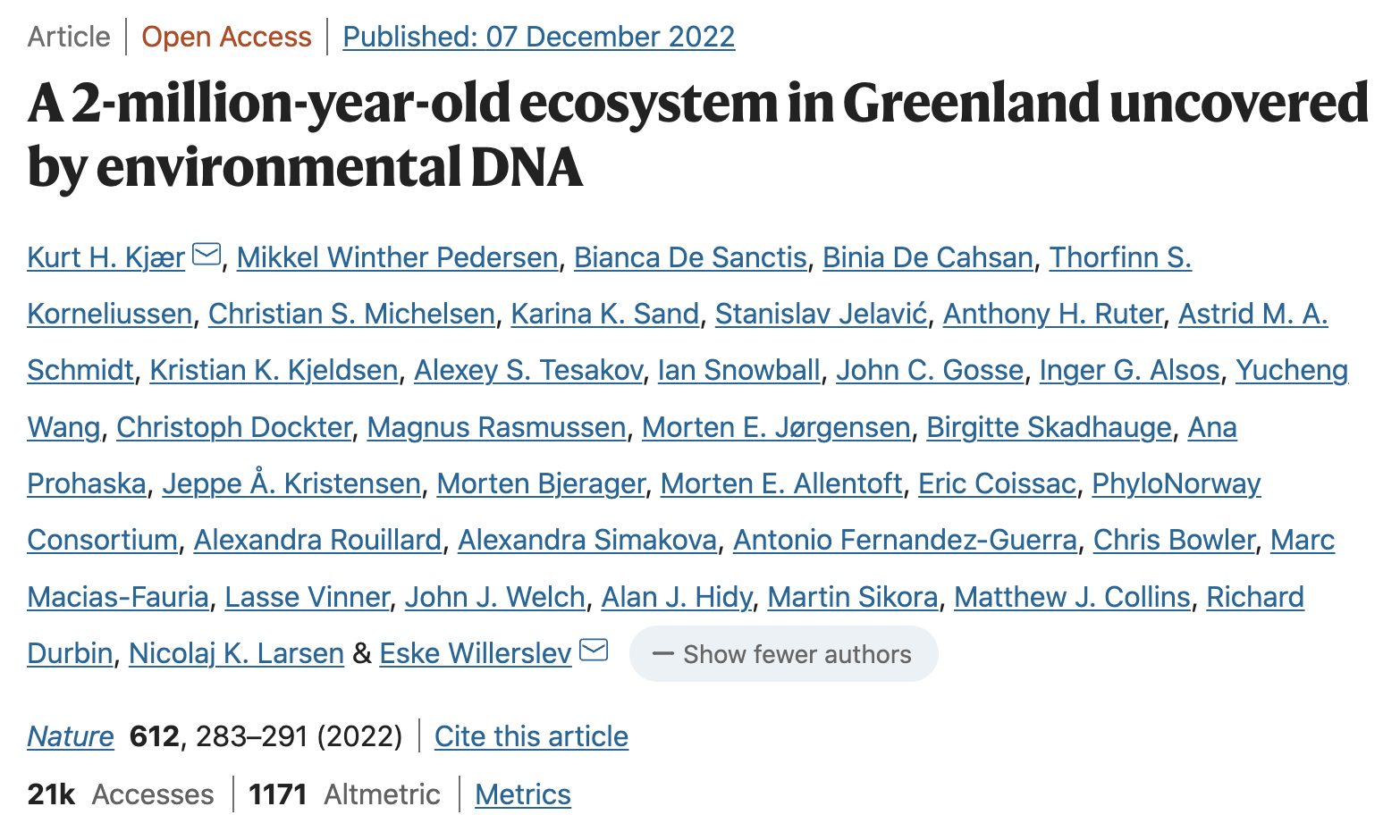 The News article for tyros (short; click to read):

Here’s the location of the area analyzed in northern Greenland, Kap København, where the layer of soil occurred (yellow star). The layer’s presence was already known, and some of the samples had been dug up in 2006 and had been sitting in a Copenhagen freezer for 16 years. Somebody had a bright idea to see if they could identify and sequence the DNA in that soil, and it worked!

Small stretches of DNA were sequenced and compared to modern DNA as well as DNA inferred in ancestors of modern taxa. The DNA had of course degraded, but they found stretches about 50 base pairs long. Comparisons were mostly to mitochondrial DNA for animals and to conserved chloroplast or other plastid DNA from plants. (They also found ancient pollen that they used in conjunction with the DNA data.)

On the right you can see what animals were found, mostly identified to genus or family because there wasn’t enough DNA to do a finer analysis. I’ll put a list of what they found below this figure:

Here’s what they found from the DNA; these were all organisms living roughly at the same time about 2 million years ago. And remember, that area now harbors very little life.

A mastodon! The figure below shows its placement on the phylogenetic tree of elephants.

70 genera of vascular plants, including sedges, horsetails, willows, hawthorns, spruce, poplars, yew, and birch. Some of these no longer grow in Greenland, but the mixture of plants includes those found in much warmer habitat. See the paper for a full list.

A caribou-like cervid (caribou are another name for reindeer). How did they get to Greenland? Presumably it wasn’t an island then, but we don’t know for sure.

A bird related to modern geese

A rodent related to modern lemmings

A horseshoe crab (identified as Limulus polyphemus, the modern horseshoe crab, regarded as a living fossil). These days Limulus doesn’t breed north of the Bay of Fundy (about 45° N), while the location of this site was 82° N. That shows how much warmer it was in Greenland then, though of course the crabs could have evolved in the last several million years to be acclimated to warmer waters.

There were no carnivores found; all the animals were herbivores. That doesn’t mean that there weren’t carnivores there, but I doubt it.

The upshot: Well, we know how that DNA sequences can be preserved for twice as long as we thought, though it has to be under very special circumstances. More important, if you find areas (and they’ll have to be in cold regions) where you can extract even small sequences of fossil DNA, you might be able to reconstruct whole ecosystems. What we’ve found are animals and plants that weren’t expected to be there (reindeer, horseshoe crabs, hawthorns) and so on—species adapted to warmer habitats or now found in areas not in Greenland.

There are two explanations for this: the related today have lost their adaptations to cold habitats when they were forced out of Greenland as the ice caps formed, or the climate was simply warmer. (Of course, both could apply.) But know the latter is surely a contributing factor from independent evidence about climate. Still, there could have been some evolutionary change in thermal tolerance as well, something for which we can’t really get evidence.

But these different explanations aren’t that important: what is important is that we’re able to reconstruct entire ecosystems from fossil DNA—DNA twice as old as previously known. I’ll let the authors have the last word (from the paper):

No single modern plant community or habitat includes the range of taxa represented in many of the macrofossil and DNA samples from Kap København. The community assemblage represents a mixture of modern boreal and Arctic taxa, which has no analogue in modern vegetation. To some degree, this is expected, as the ecological amplitudes of modern members of these genera have been modified by evolution. Furthermore, the combination of the High Arctic photoperiod with warmer conditions and lower atmospheric CO2 concentrations made the Early Pleistocene climate of North Greenland very different from today. The mixed character of the terrestrial assemblage is also reflected in the marine record, where Arctic and more cosmopolitan SMAGs of Opistokonta and Stramenopila are found together with horseshoe crabs, corals and green microalgae (Archaeplastida), which today inhabit warmer waters at more southern latitudes.

. . . In summary, we show the power of ancient eDNA to add substantial detail to our knowledge of this unique, ancient open boreal forest community intermixed with Arctic species, a community composition that has no modern analogues and included mastodons and reindeer, among others. Similar detailed flora and vertebrate DNA records may survive at other localities. If recovered, these would advance our understanding of the variability of climate and biotic in

Will northern Greenland be like this again should global warming continue? I doubt it, for many of the species, like caribou, can no longer get there, and some, like mastodons, are simply extinct. But it’s enough to know what was there two million years ago.