Here are a few items about the impending invasion of New Zealand’s “indigenous knowledge” into the chemistry curriculum (the government has decided to give the indigenous way of knowing, Mātauranga Māori (MM), status coequal to that of modern science in the classroom, and also bring about equity in funding of projects incorporating MM.

First, we have a very sensible article by Michael Matthews in last March’s issue in the HPS &ST Newsletter (“HPS” stands, I think, for the history and philosophy of science, but I’m not sure where the “ST” comes from.) Anyway, the piece is worth reading, for Matthews isn’t a huge critic of MM, but seems fair. (I’ve provided a link to the postmodern concept of “constructivism”.)

There are educational, cultural, ethical, and political reasons for the teaching and learning of local ethnosciences. But these reasons are all independent of the scientificity, or otherwise, of Māori or any other ethnoscience. The placement of ethnosciences in the school or university science programme depends upon confusing the first sets of reasons with scientificity. Indigenous knowledge systems or, more loosely, ways of knowing can be respected, championed, and learnt from without them needing to be called ‘science’. Much less deemed the equivalent of science. This should be a simple matter to understand, but the influence of constructivism in NZ education and philosophy, and the extension of post modernism in so many academic and cultural areas, has meant that this simple point has not been widely understood. 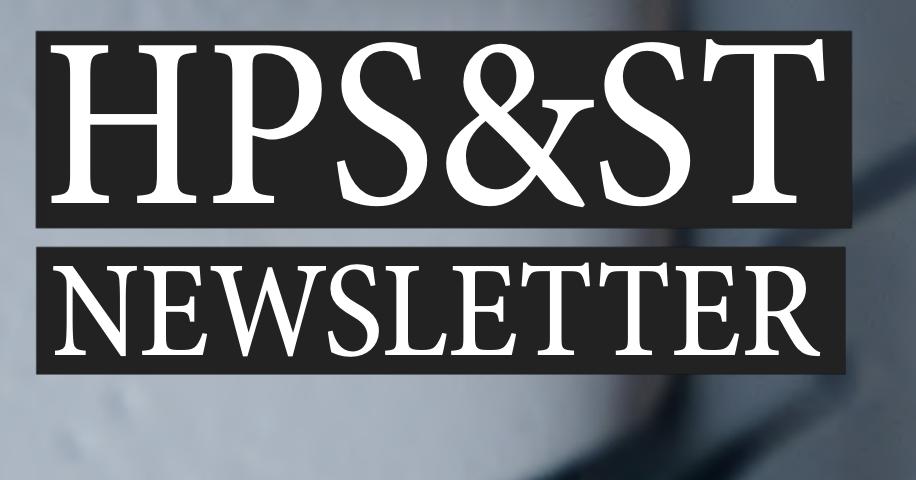 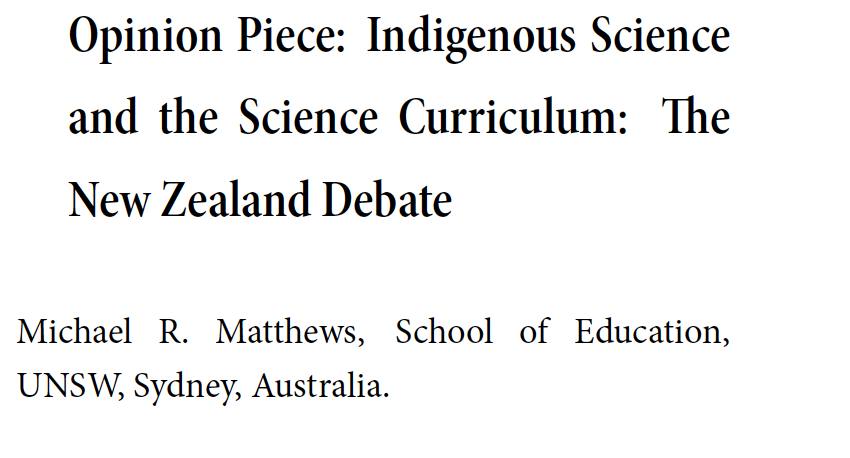 Because the MM concept of “Mauri” (life spark or essence, said to be present in all matter) is increasingly vetted as something to put into science, I wanted to give an excerpt from Matthews’ piece about how it’s being used not just in education, but in public policy, and at taxpayers’ expense (bolding is mine):

The correct, clear-headed appraisal of Mātauranga Māori has not just cultural and educational consequences, but economic ones. Consider the once-routine monitoring of river, lake and drinking water quality. Local governments would periodically test for bacteria, acidity, nutrient levels, biochemical oxygen demand (BoD), oxygen levels and sundry other, up to 22, agreed upon and measurable factors. The Taranaki Regional Council, which includes Mt Egmont and the city of New Plymouth, has for decades done this monitoring at 13 sites. But as of last year, the Mātauranga Māori notion of Mauri has been added to the determinants of water quality and will be so monitored. With national government assistance, NZD4.95M has been set aside for the 5-year task.

Initially this might sound nice, and culturally sensitive, bringing Western science and Māori spirituality together. But what is mauri? The Te Aka Māori Dictionary provides this definition:

1. Mauri (noun) life principle, life force, vital essence, spe18 march 2022 hps&st newsletter cial nature, a material symbol of a life principle, source of emotions – the essential quality and vitality of a being or entity. Also used for a physical object, individual, ecosystem or social group in which this essence is located.

Gisborne Council defines mauri in their Tairawhiti Resource Management Plan as ‘essential life force or principle, a metaphysical quality inherent in all things, both animate and inanimate’. The NZ Peak Body for Youth Development (AraTaiohi) elaborates:

Mauri is the life spark or essence inherent in all living things that has been passed down from ancestors through whakapapa. Mauri affects and is affected by the surrounding environment. It is a motivating force and also encapsulates a process of change from Mauri moe, a state where potential is as yet unrealised; through Mauri oho, sparks of interest and the realisation that change is possible; to Mauri ora, an action-oriented stage of striving towards full potential

Unlike the 22 generally accepted ‘scientific’ indices of water quality, all of which have appropriate measuring techniques and instruments, there are precisely zero techniques, much less instruments, available for measuring mauri in water or even in water environs. So, at the end of five years and with the expenditure of nearly five million NZD, how does anyone know whether mauri has gone up, down, or remained constant? And, of course, once Taranaki has succeeded in getting grant money, it would be expected that the other ten councils in the country will do the same thing. Why not test mauri levels in the waters of Otago, Southland, Auckland, and so on? There is nothing in MM to dissuade councils from seeking such funds, and indeed MM supporters, or lobby, can be expected to push for such research funds.

Matthews says this about a “mauri compass”, supposedly a way to measure mauri, but really just a written “set of conversation starters:

. . . The developers say: We are not trying to define mauri. But it [the compass] is a tool to help people articulate it, a good conversation starter with trigger questions for conversations with people around their waterways.

Matthews goes on, showing the weakness of trying to use mauri as any kind of quantity to estimate:

Such conversations do no harm and can do some good, but the process is a long way from scientific measurement. Feng Shui consultants charge money for ascertaining that a dwelling near water, in the sun, protected from wind, not overlooking a cemetery has good chi (Matthews 2019, chap.4). Manifestly, the chi appellation does not add anything to what is already known. Such a dwelling will be pleasant to live in. Indicators are that mauri is in the same situation.

It is a relatively easy task to show that mauri is in the same non-scientific league as Eastern, and increasingly Western, chi beliefs (Matthews 2019). And as with chi, the ever-present danger is that mauri commitment becomes pseudoscientific; an accessory for hucksters and rent seekers. ‘Life sparks’, ‘life forces’, and ‘living essences’ have all the hallmarks of well known, and discredited, Vitalism in the history of science.

As well as direct costs involved in monitoring mauri, there are oft-ignored ‘lost opportunity costs’. What else in the Taranaki Council area could NZD4.95M be spent on: Women’s shelters? Public housing? Community transport? Infant health clinics? Expanded library service? These are unfunded while a fantasy is pursued.

So much for the life force—a “fantasy”. But the fantasy of mauri is invading all of the sciences, and presumably will be taught in science classes, even though it’s pretty much the same thing as “chi”. Take a look at the set of chemistry and biology standards below put out by a NZ government organization, the National Certificate of Educational Achievement. You can look at the “Big Ideas” yourself, or just see the one I’ve highlighted below (click on either screenshot):

Look! They bring up mauri again. But look at the other “Big Ideas” on that page: more numinous junk MM stuff.  All particles have life force! This is perilously close to panpsychism: 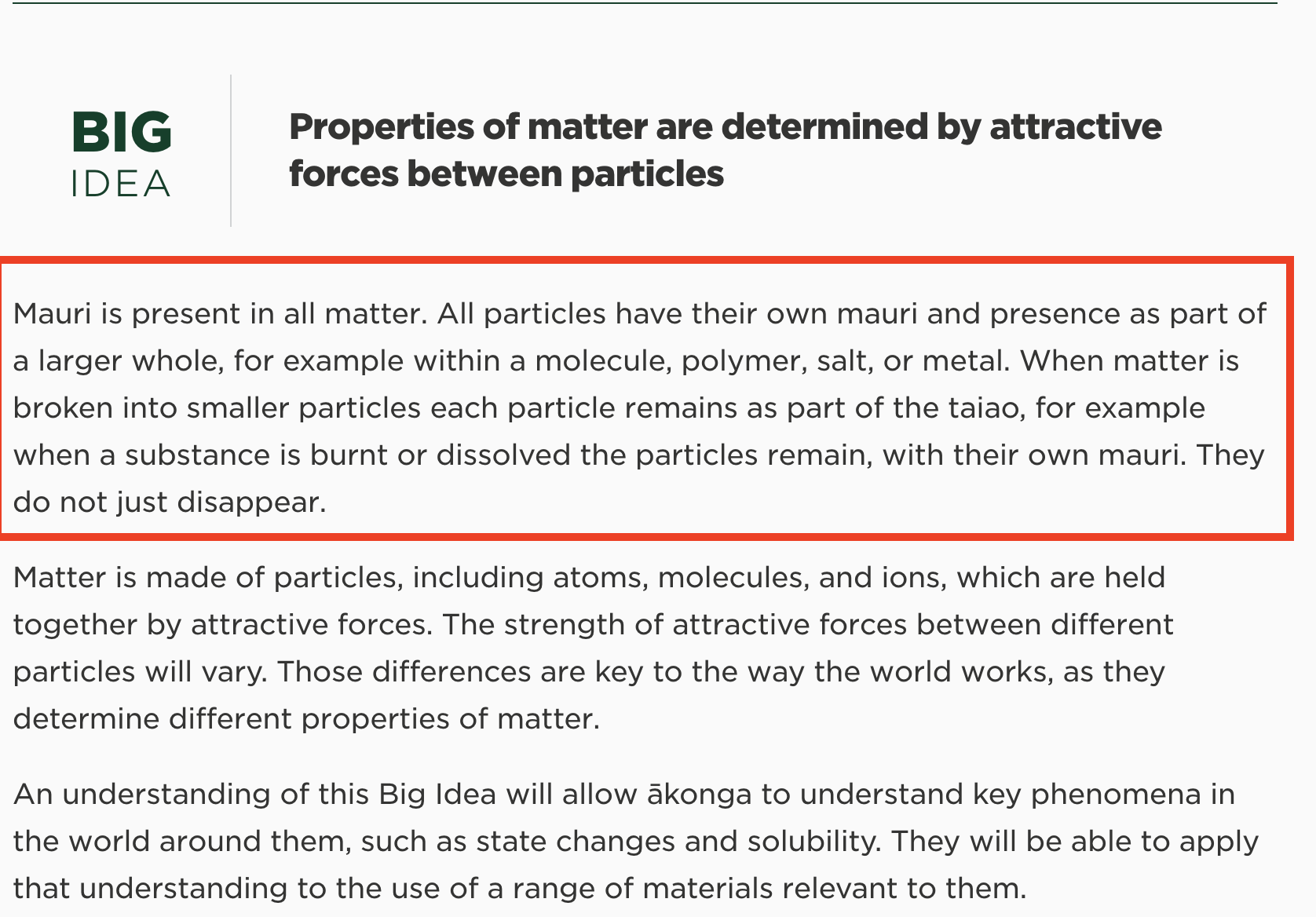 Yes, folks, that’s a proposed bit of the science curriculum in New Zealand.

Below is more invasion of mauri into chemistry in New Zealand. Fortunately, I needn’t go over this, as Nick Matzke has already covered this very article (click to read), as well as a talk by Kilmartin, over at The Panda’s Thumb website. Nick also adduces more intrusions of the numious mauri into other places, even electrical engineering. I’m glad that Nick is on this distortion of real science in NZ, as I’d hate to be the only American banging on about this.

But wait—there’s more! Here’s mauri in electricity (the figure comes from Nick’s piece; the arrow is mine).  This is bizarre—an unnecessary intrusion of spirituality into wiring! 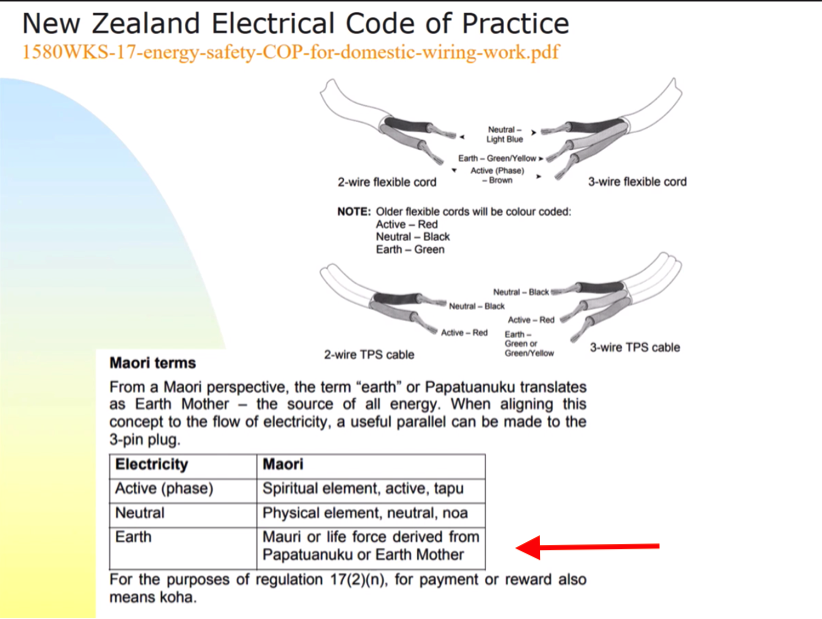 Finally, below you can read a new article from the New Zealand Herald. The “makeover” of science, of course, involves embedding more MM and more indigenous “science” into the whole science sector, not just the curriculum:

The first would be an overhaul of the workforce itself, including an expansion of research fellowships and applied training schemes, along with another programme aimed at attracting more international talent to New Zealand.

“There will be a stronger focus on people, with an emphasis on building sustainable and fulfilling career paths in science, improving diversity and addressing precarious employment,” she said.

Alongside that, the Government will set out how Te Tiriti o Waitangi [The Treaty of Waitangi, often used as a reason to give MM status coequal to science] should be better embedded in the system, with a statement to be released later.

The second phase, beginning in 2024, would set yet-to-be determined research priorities that tackled the most important issues facing New Zealand.

Well, I can tell you, if the government still insists on equating MM with modern science, or on trying to blend spiritual concepts of the Māori “way of knowing” into science and technology education, it is not going to “attract more international talent” to New Zealand. In fact it’s the opposite: the infusion of MM, which includes religion and spirituality—stuff like mauri—into science teaching, will in the end drive good researchers out of New Zealand.