A reader called my attention to a site that looks to be a gold mine of information on human sex, how sex evolved, why there are only two sexes, and on the various disorders of sex development, or DSDs (the term “DSD” isn’t much liked by the no-binary-sex crowd, but it’s ensconced in the literature).

The two dozen videos, mostly about biology rather than ideology, were made by the Paradox Institute, which states its mission this way (I’ve put in a link to the site’s founder):

Created in 2020 by Zachary Elliott, the Paradox Institute is an independent science education group focused on helping people learn about the biology of sex and the differences between males and females.

From cleanly illustrated animated videos to long form essays, the Paradox Institute aims to provide informative and entertaining content on some of the most fundamental and controversial research in the biology of sex differences.

And though the videos largely focus on biology, of course they have a quasi-ideological purpose: to dispel misconceptions about the binary nature of sex (yes, it’s binary), to explain why the sexes in animals are only two, to explain why traits like chromosome constitution are correlated with but not part of the definition of sex, and to explain the variety of DSDs.  This is important because the site uses science to correct widespread misconceptions about sex—misconceptions, like the view that “sex is a spectrum”, that arise from ideological commitments.

You can see the panoply of videos by clicking on the screenshot below:

I’ll post just three (all are on YouTube), and you can be the judge. I think watching these is a good way to inform yourself about the biology involved in the Sex and Gender Wars.

Below are the most important ones, which give you the biological definition of “sex” (i.e., what is a sex, not the act of sex!), and explain why there are two sexes. I’m interested in these because I’m writing a bit on the sex binary now.

The second video is longer and includes what’s in the first, so you may want to watch that one instead if you have time (the second is 17 minutes long). As far as I can judge, the videos are biologically truthful, which means they’ll offend those who want to claim that sex is a a continuous distribution—the “spectrum”.

In his influential book The Genetical Theory of Natural Selection, the famous but now canceled biologist R. A. Fisher extolled the virtue of theoretical biology in this way:

“No practical biologist interested in sexual reproduction would be led to work out the detailed consequences experienced by organisms having three or more sexes; yet what else should he do if he wishes to understand why the sexes are, in fact, always two?” (p. ix)

The video below gives an answer for the layperson that avoids mathematical messiness. Let me add that having two divergent types of gametes, one large and immotile and the other small and motile, is an “evolutionarily stable strategy” (ESS): once these two types have evolved, no other gamete type can evolve and invade the population. And that’s why the sexes—except for the “mating types” in some protists and fungi—are always two.

On the other side of the ring, wearing the blue trunks, is the Science-Based Medicine gang, which have lost their bearings over sex and gender after removing Harriet Hall’s laudatory review of Abigail Shrier’s book Irreversible Damage. Now they’re saying that sex isn’t binary but bimodal, and other such mishigas. This article by Andy Lewis from the site “Reality’s Last Stand” shows how far the nonsense has gone (click on screenshot):

[Steven] Novella sums up his argument in a paragraph:

Biological sex is not binary

The notion that sex is not strictly binary is not even scientifically controversial. Among experts it is a given, an unavoidable conclusion derived from actually understanding the biology of sex. It is more accurate to describe biological sex in humans as bimodal, but not strictly binary. Bimodal means that there are essentially two dimensions to the continuum of biological sex. In order for sex to be binary there would need to be two non-overlapping and unambiguous ends to that continuum, but there clearly isn’t. There is every conceivable type of overlap in the middle – hence bimodal, but not binary.

This is quite an extraordinary claim for the simple reason that not a single peer reviewed biology paper, written by a biologist, has ever claimed that sex is best described as “bimodal.” There may be papers that characterise sex differences in various features (the amount of dimorphism, etc.) as being bimodal, but not sex itself. How can Novella be so confident in saying that the “bimodality” of sex is uncontroversial among experts when not a single expert has ever said it in their primary literature? This needs explaining.

Read the explanation for yourself. The end of the piece says this:

Steven Novella sets out with the explicit political intention of showing how people with trans identities fall in the middle of a “bimodal distribution of sex.” He claims this characterisation of sex is settled and non-controversial.

What I have shown is how biology reveals sex to be a strict dichotomy of male and female based on anisogamy (two distinct gamete types). No peer reviewed biology paper has ever characterised sex itself as bimodal and shown how to create this statistical distribution from measurements of sex. At best the bimodal idea is a metaphor. At worst, it is handwaving nonsense. The idea has not come from biological science but from “gender studies” academics with explicit political agendas.

. . . In Part II, we will look at how Novella ups a gear and introduces new muddles and conflations between sex and sexuality, between sex and gendered expressions, how the controversy over brain dimorphism is exploited, and how incoherent concepts of “gender identity” muddy the waters.

Finally, I will address why this massive muddle exists. What is going on where so many people are now believing things found nowhere in the actual primary biological literature? How did Novella come to write such a tangled web of nonsense?

I couldn’t find part II of Lewis’s piece, but maybe I didn’t look hard enough. At any rate, Novella (a neurologist) and the Science-Based Medicine website are influential communicators of science, with many followers. But on this issue, at least, it’s gone off the rails.

Another person who’s wobbling on the rails appears to be Neil deGrasse Tyson, also a respected and wildly popular science communicator (and of course, an astrophysicist). Although in the past I’ve been mildly irritated by his waffling about being an atheist vs. an agnostic, I have no major beef with him and do enjoy his palpable enthusiasm for physics. But I have a small beef today (a filet mignon?): Tyson, like Novella, appears to reject the binary nature of biological sex.

Reader Luana sent me this tweet showing pages from a new book by Tyson, Starry Messenger: Cosmic Perspectives on Civilization. You can read what he wrote in three pages, and I have no big objection to most of what is shown, though it gets a bit weird when he says, “At last count, there were at least seventeen [gender] nonconforming designations. . . “. That’s a remarkably precise statement when there are at least 100! But he’s talking about “designations”, which means words, not clear-cut categories.  What really bothers me is what he says in the two excerpts below, particularly the second (I’ve added the red rectangles for emphasis: 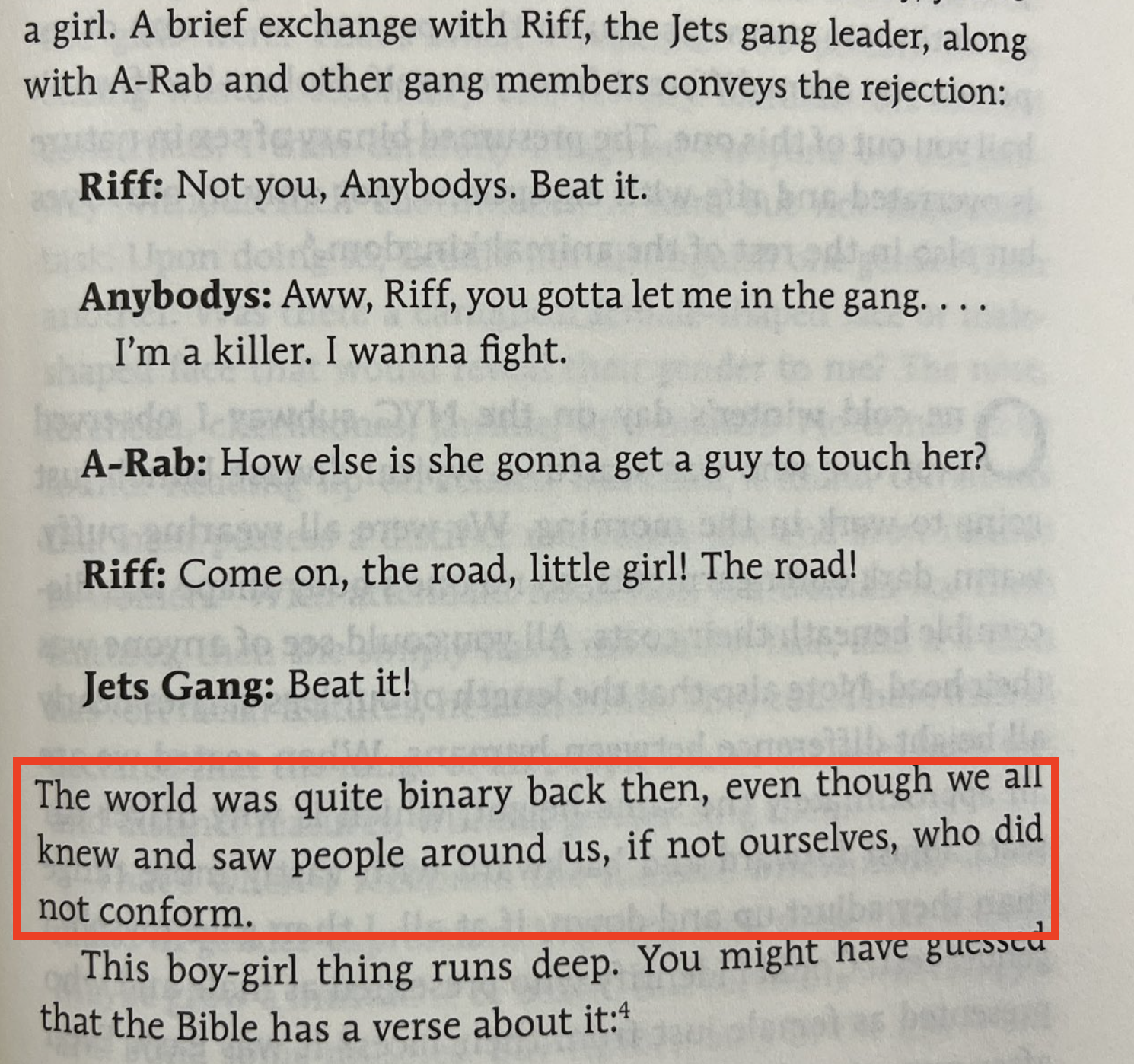 Now that’s not egregious, though the world still remains “quite binary” when it comes to biological sex. But Tyson appears to be conflating sex with gender, as we can see from the truly bothersome bit below: 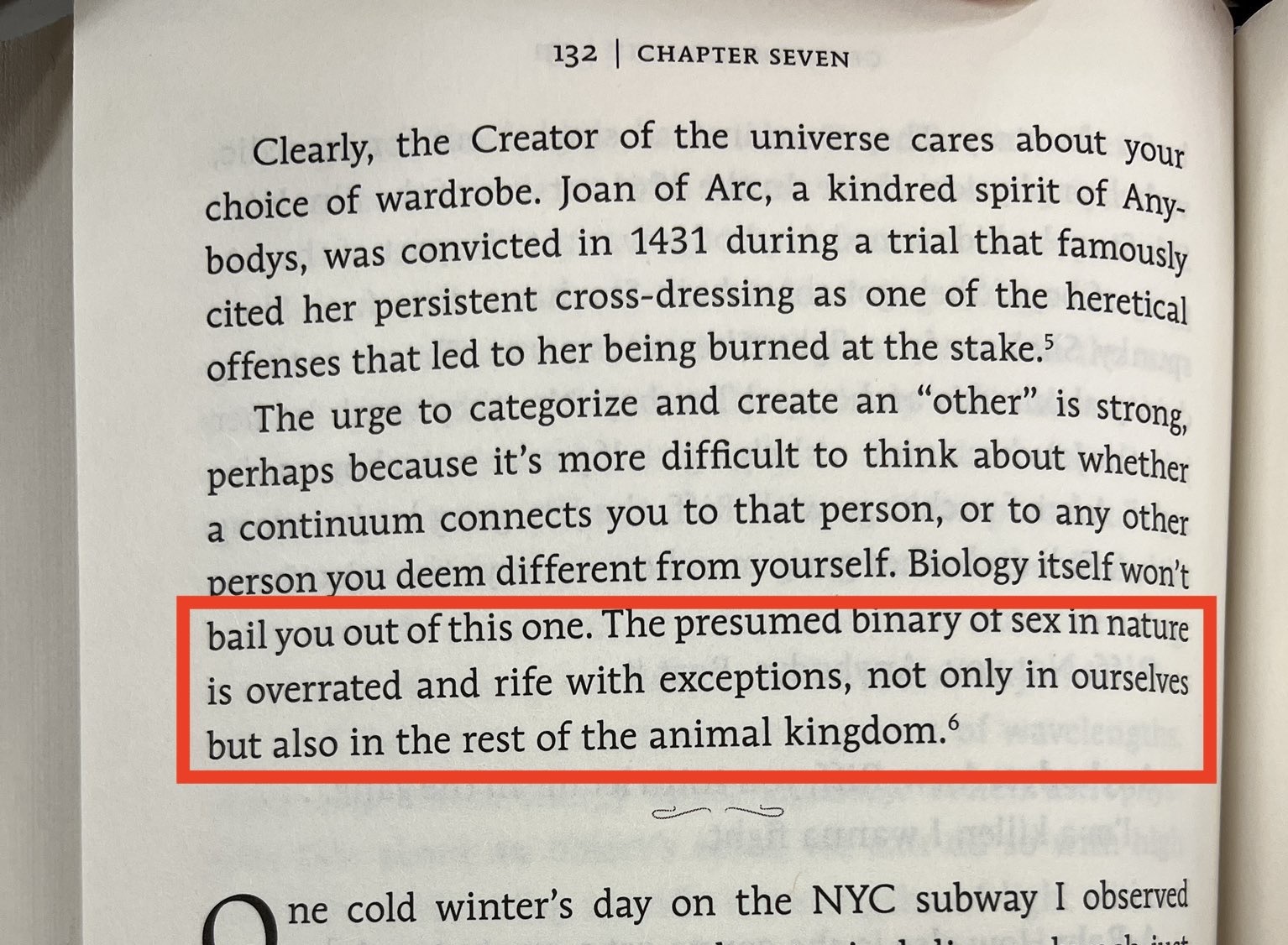 “The presumed binary of sex in nature is overrated and rife with exceptions. . . “?  “Presumed “binary? And “rife” with exceptions? The exceptions to the binary are 0.018% of the population, or about one person in 5600. If 5599 people are either male or female, and there’s one intersex person, that’s as close to a binary as you can get.

Here Tyson, like Novella and many others (see our old friends at Scientific American here and here), want to be on the side of the angels by asserting that sex, like gender, is a spectrum. Well, gender is more towards being a spectrum than sex, but gender is still bimodal rather than binary. That is, there are two frequency humps for gender roles (“male role” and “female role”), and many more individuals in between than the 1/5600 we see for sex.

This is my prime example of the distortion of science by ideology.  The purpose of pretending there are more than two sexes is to support those who have assumed non-traditional gender roles. In other words, those who question the binary nature of sex are doing so because they’re trying to make nature itself conform to an ideology that accepts the non-binary nature of gender. The conflation is deliberate, an example of what I call the “reverse appeal to nature”: “what is good must be what is natural.” But as Richard Feynman said about the Challenger space shuttle disaster, “reality must take precedence over public relations, for Nature cannot be fooled.”

And, in the end, there’s no reason to misrepresent science: people of different genders can be supported and respected without having to distort the nature of biological sex.

56 thoughts on “Getting straight about sex: A collection of useful videos about sex and sex differences, and some mishigas by a couple of scientists”