I didn’t know that the Center for Inquiry (CFI) magazine Free Inquiry was online, but it is. And reader Nicole sent me a link to this article by Robyn Blumner, CEO of the CFI—an institution with a long history of fighting for humanism and secularism—as well executive director of the Richard Dawkins Foundation for Reason and Science. Each of those organizations is a rara avis: a liberal organization that has not caved in to the “progressives”. (I keep getting tsouris, in the form of chastising emails, for using the word “woke”.)  Here we see Robyn taking out after the tendency of some Leftists to efface or hide the truth, and explaining why humanists above all should care about the truth.

Click on the screenshot to read (there are footnotes and references in the original text): 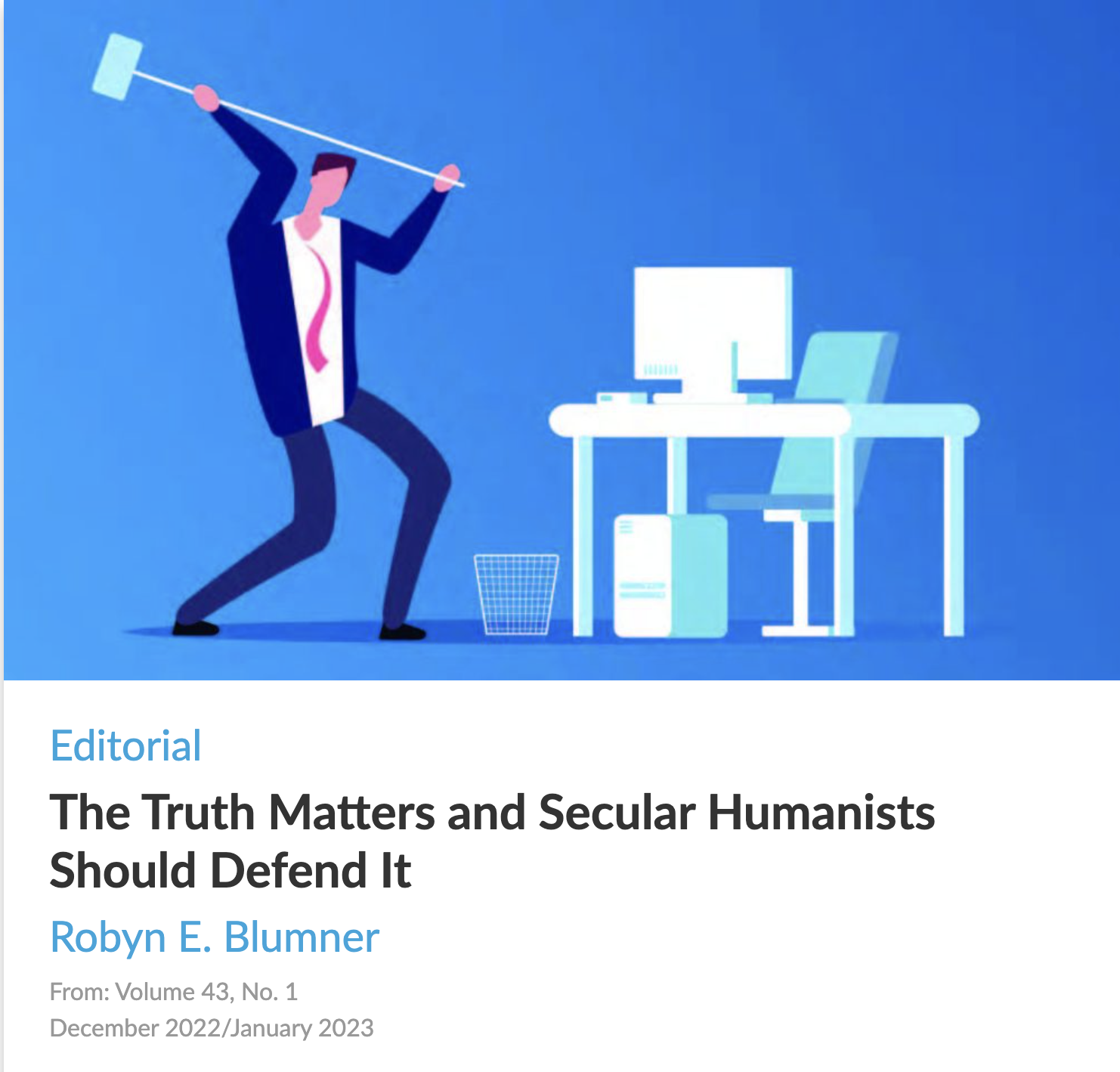 I’ll give a few quotes, but realize that I’m not scratching Robyn’s back because she scratched mine. It’s a good piece, and counteracts the “progressive” excesses of organizations like the ACLU (which Robyn used to work for).  Excuse my blushing here.

But the truth is under a sustained assault right now, and secular humanists need to stand up for it, even when that is hard.

It was relatively easy for most of us to condemn the allergic-to-truth rantings of former President Donald Trump. His lies were so transparent and prodigious that anyone outside the MAGA-verse could easily see through them. Many of us collectively recoiled at the reality-distortions he spun and how they were lapped up with religious-like zeal by his followers.

There are plenty of examples of how America’s right wing is a danger to truth-seeking institutions and standards. That is not what I want to focus on.

Because there is also truth-slaying happening in progressive circles generally in the name of social justice. And because so many secular humanists lean toward liberalism, it is here that we need to shine a light and, frankly, stop the insanity.

Agreed. So don’t give me tsouris for calling out the Left! Read on, though I’ve redacted one word in the first sentence below.

I commend to everyone Jerry Coyne’s terrific website Why Evolution Is True (https://whyevolutionistrue.com/), which you can subscribe to for free. An emeritus biology professor at the University of Chicago and a classical liberal himself, Coyne has been closely following the excesses and illiberalism of the woke Left.

There is no more stark example than the ways science has been twisted to conform to a social justice agenda.

Coyne describes the controversy in New Zealand where there is an official government effort underway to equate the indigenous Maori system of knowledge called “Matauranga” with the scientific methods of conventional Western science and that this different way of knowing be taught in science classes.

An appalled biology colleague of Coyne’s in New Zealand described some of the god stories of the Matauranga: “Tane the god of the forest is said to be the creator of humans, and of all plants and creatures of the forest. Rain happens when the goddess Papatuanuku sheds tears.”

There is some practical knowledge as part of the Matauranga, but much of its “science” is laden with superstitions, story-telling, and myths.

Truth must be of higher value for secular humanists than acceding to equity demands from a minority group, no matter how sympathetic to them we may be.

Note that Richard will be visiting New Zealand last year, and the “other-ways-of-knowing” people are already sharpening their knives, for he enraged them by weighing in when the spineless Royal Society of New Zealand defended Matauranga Māori as being a valid “way of knowing”. Richard sent them an excoriating letter and also wrote to “New Zealand friends of science and reason.” It will be a magnificent clash between the eloquence of Dawkins and the determination of those who want to valorize an indigenous “way of knowing” that is largely legend, superstition, and religion.

But wait! There’s more from Robyn:

A prime [example] of science under siege by the social justice police—those who seek to impose their own view of social justice at the expense of free inquiry and the open-ended search for the truth—is in behavioral genetics. It’s a field that could not be more fraught. Any scientist who chooses to enter it risks being called a eugenicist or racist.

She goes on to praise Kathryn Paige Harden’s book on behavioral genetics, a book I praised in the WaPo for taking on the subject, but also criticized for not specifying how we can use genetics to achieve “equity”.

Then there is the current most radioactive subject of all: What medical interventions are appropriate for minors who may be suffering from gender dysphoria? This is a medical question with immense consequences, and the correct answer may depend on a range of individualized factors, making this highly politicized issue a medical quagmire.

Politics has elbowed in in disgraceful ways such as the order by Texas Governor Greg Abbott sending state investigators to inspect homes where minors are receiving gender affirming medical treatment, equating it with child abuse. As if these families aren’t facing challenges enough.

But the political Left has also gotten ahead of the science in ways that could be seriously harmful for children. For instance, James Esseks, director of the ACLU’s LGBTQ & HIV Project, promotes puberty blockers for children as a hormonal way to pause puberty while a minor is gaining clarity on their condition. He calls the intervention “completely safe and totally reversible.”

Unfortunately, that’s not a scientifically supportable statement. The National Health Service (NHS) in the United Kingdom says there is not enough data to draw that conclusion. The NHS website on treatment for gender dysphoria says “little is known” of the long-term side effects of puberty blockers and it is “not known” whether puberty blockers “affect the development of the teenage brain or children’s bones.”

Legitimate questions have been raised not only about the appropriate age of medical interventions but whether young girls are at risk of being unduly influenced by social pressure to claim transgender status. This is not a big deal if all we are talking about is pronouns, but it is a very big deal once medical science is employed. Statistics from the United Kingdom indicate that 70 percent of those seeking to transition in the past decade are girls wanting to become boys, which is significantly different from the past when by large margins males wanted to transition to female.

These questions are about getting at the truth. Yet just raising them is enough to bring down the wrath of the political Left and get you labeled a transphobe.

A recent column by the social psychologist Jonathan Haidt, who cofounded Heterodox Academy, said he warned back in 2016 that “the conflict between truth and social justice is likely to become unmanageable.” Well, that time has come.

Oh, and Robyn recommends a book that deserves its encomiums:

Finally, I urge every secular humanist to read Jonathan Rauch’s important book The Constitution of Knowledge: A Defense of Truth. In clear terms, Rauch explains the dangers to our social order of abandoning not only the truth but the objective rules we use to test whether a claim is valid.

. . .choking off dissent damages the essential underpinnings of a reality-based community. These actions, no matter how good the intentions, are helping to dismantle the knowledge-based world. The world that secular humanists are committed to supporting and protecting, and most importantly the world we need for all of us to continue to thrive.

I like that phrase: “reality-based community”. For that what secular humanists are, and what believers are not. I suppose you could call the religious (and many Republicans) “the fantasy-based community.”

40 thoughts on “Robyn Blumner on truth and humanism”