Thanks to the many readers (probably atheist Brits) who sent me the links to these articles.

Of course England and Wales will still consider themselves Christian countries, but they have to do some fast stepping to justify it, for the 2021 government census (conducted once per decade) shows that people who identify as Christian no longer form a majority of the populations. They’re “Christian” only in the sense that Christianity is the faith of a plurality of people. (Scotland apparently wasn’t part of this survey.)

The decline in Christianity, which has been breathtakingly fast over the last decade, is the good news.  More good news is that, as expected, the proportion of people saying they had “no religion” has risen as steeply as Christianity has fallen.

The bad news is that Islam is growing, though that’s probably via immigration, not, like Christianity, via (de) conversion or death. And it’s still a tiny fraction of British faith.

Here are two articles; quotes from both are indented below with “G” for the Guardian and “B” for the BBC. Click on the screenshots to read.  The articles also discuss the growth in England’s ethnic minority population, but I’m dwelling on religion here.

It is the first time in a census of England and Wales that fewer than half of the population have described themselves as Christian.

Meanwhile, 37.2% of people – 22.2 million – declared they had “no religion”, the second most common response after Christian. It means that over the past 20 years the proportion of people reporting no religion has soared from 14.8% – a rise of more than 22 percentage points.

Note that the 13% fall in the proportion of Christians (these include Catholics, Anglicans, and assorted followers of Jesus) took place in only a decade. Likewise the 22.4% increase in those espousing “no religion” also occurred within the last decade. If this goes on, in the next census more than 50% of Welsh and English will be nonbelievers, and the proportion of Christians will be about 33%. As you can see from the BBC graph below, the decrease in faith and increase in unbelief over two decades have followed a nearly straight-line plot, making extrapolation easy (and probably unreliable).

Muslims are still a small minority of the population, so we don’t have to worry about a big increase of Islam in the UK. 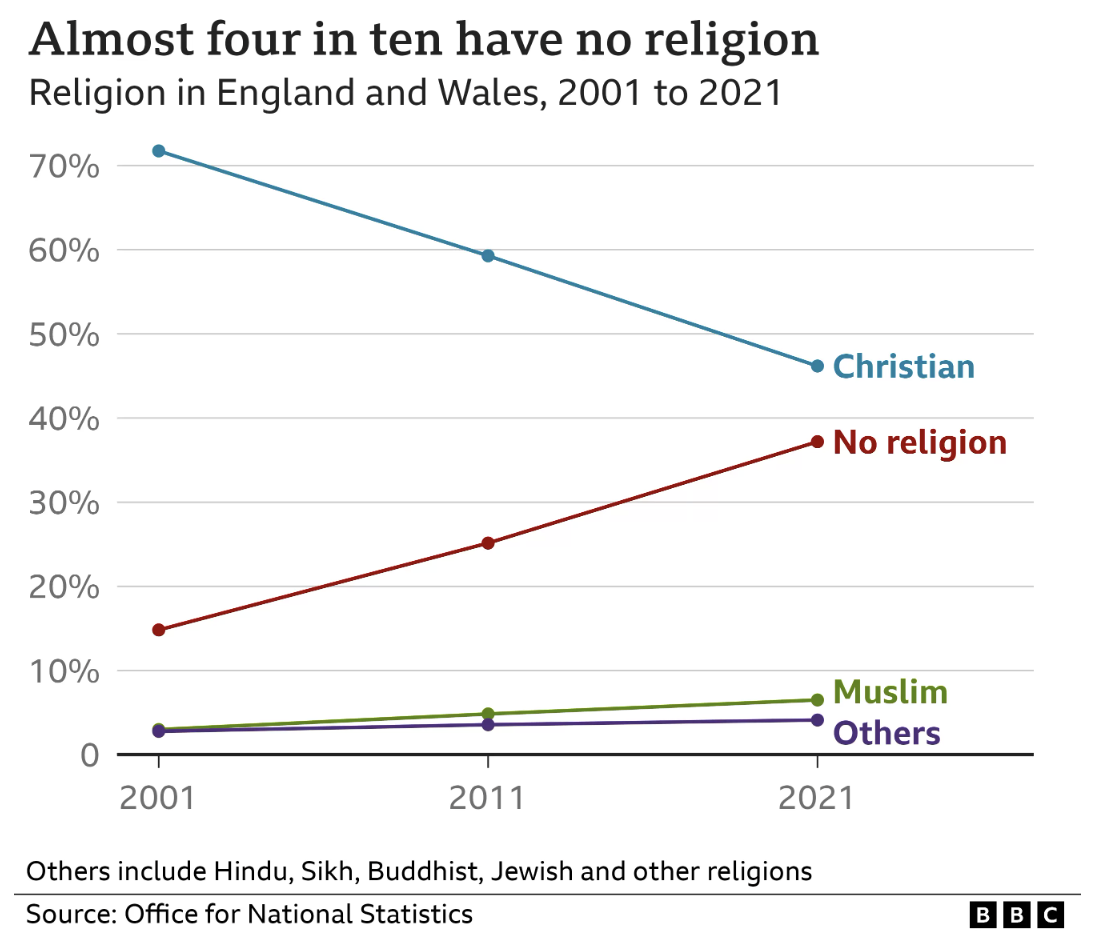 More data from the Beeb. 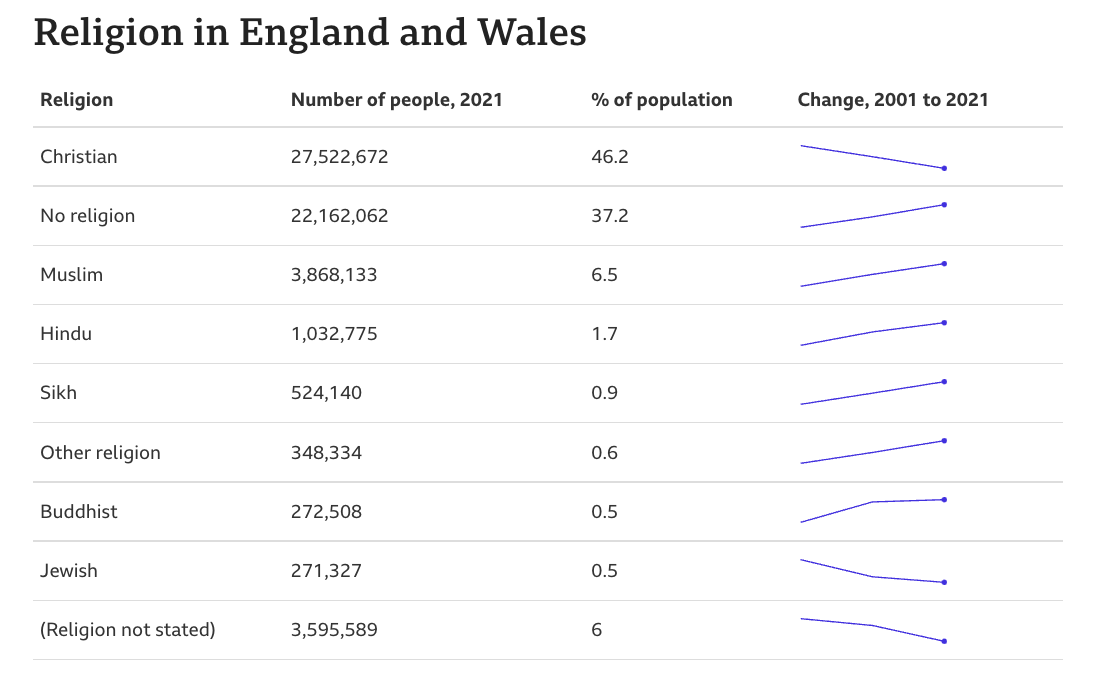 The hotspots for nonbelief from the Guardian:

The places with the highest numbers of people saying they had no religion were Caerphilly, Blaenau Gwent and Rhondda Cynon Taf, all in south Wales, and Brighton and Hove and Norwich in England. They were among 11 areas where more than half the population are not religious, including Bristol, Hastings in East Sussex and Ashfield in Nottinghamshire, most of which had relatively low ethnic minority populations.

The places with the lowest number of non-believers were Harrow, Redbridge and Slough, where close to two-thirds of the populations are from minority ethnic backgrounds.

There is a correlation, with areas having the highest minority populations also being the most religious, surely because ethnic minorities are more religious than Indigenous Welsh and Brits.

Below you can see hotspots of nonbelief—the darker ones. Ceiling Cat bless the Welsh! London is a hotbed of Christianity, possibly because it has a high proportion of minorities (are they less frequent in the tony area of Islington?): 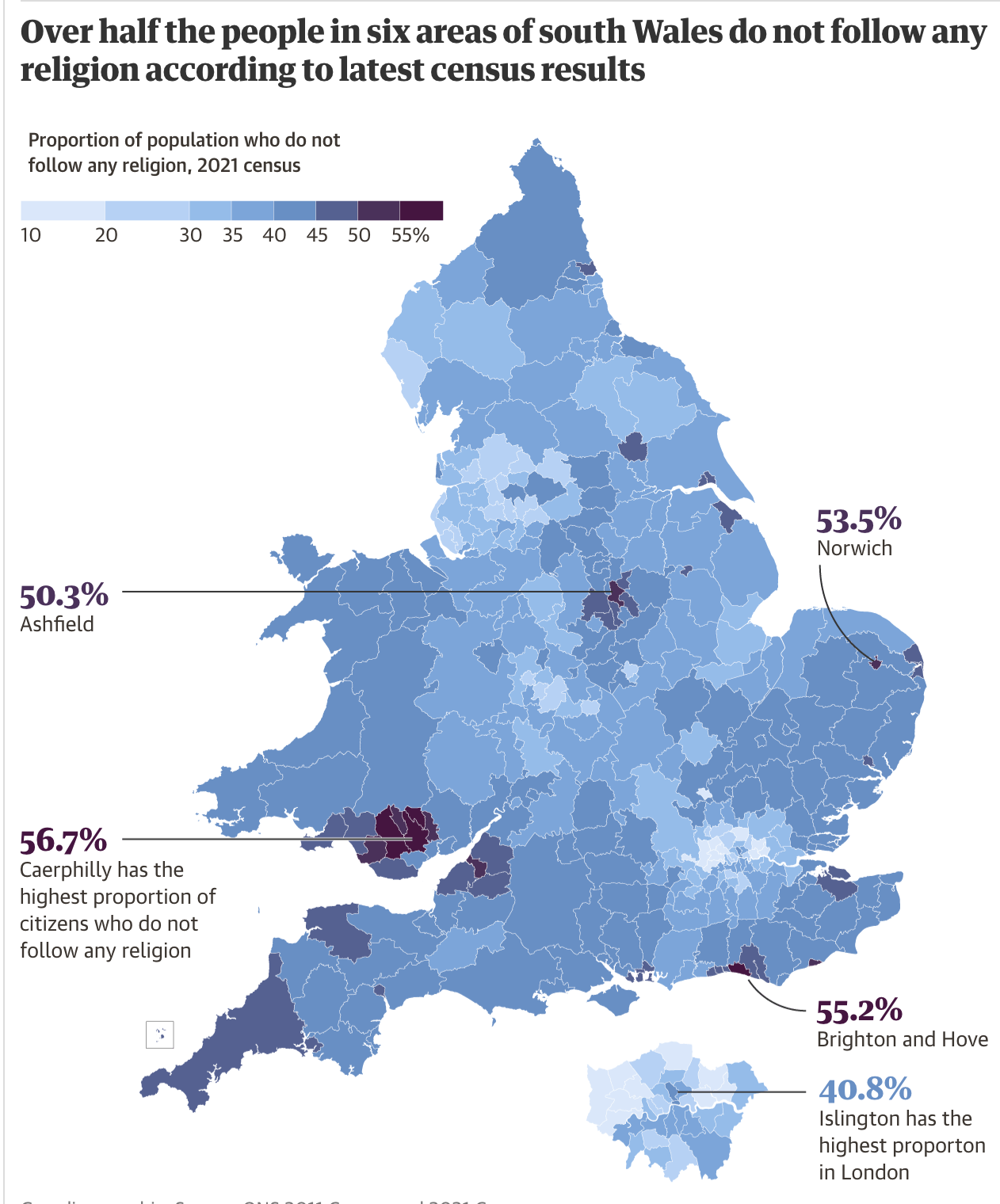 And while the atheists and humanists are making hay, the distressed Archbishops are kvetching hard (G):

The archbishop of York, Stephen Cottrell, said the census result “throws down a challenge to us not only to trust that God will build his kingdom on Earth but also to play our part in making Christ known”.

He added: “We have left behind the era when many people almost automatically identified as Christian but other surveys consistently show how the same people still seek spiritual truth and wisdom and a set of values to live by.”

But why do humans have to make Christ known when Christ could make himself known—simply by returning? He won’t return, of course, because a divine Jesus (and perhaps no Jesus person) ever existed.

The good folk weigh in:

The chief executive of Humanists UK, Andrew Copson, said: “One of the most striking things about these census results is how at odds the population is from the state itself. No state in Europe has such a religious setup as we do in terms of law and public policy, while at the same time having such a non-religious population.”

. . .Humanists and secularists seized on the figures as proof of the need for an overhaul of religion’s role in a society that has bishops of the established Church of England voting on laws and compulsory Christian worship in all schools that are not of a designated religious character.

“It’s official – we are no longer a Christian country,” said Stephen Evans, the chief executive of the National Secular Society. “The census figures paint a picture of a population that has dramatically moved away from Christianity – and from religion as a whole. The current status quo, in which the Church of England is deeply embedded in the UK state, is unfair and undemocratic – and looking increasingly absurd and unsustainable.”

I didn’t know about that “compulsory Christian worship” in non-religious schools, but it’s ridiculous. (I presume that Jews, Muslims, and nonbelievers can opt out.) Remember that the Church of England is the official National Church, and the King is the head of the Church. That has to go, too. It’s time for England to join Scandinavia in pervasive nonbelief.

Dr Adam Rutherford, the president of Humanists UK, said people should not think a decline in religion equated to an “absence in values”.

“We might be living in a more values-driven society than ever before,” he said. “Surveys show, for example, that around three in 10 British adults have humanist beliefs and values, and it’s a trend we’ve seen growing in recent years.”

Humanists say they trust science over the supernatural, base their ethics around reason, empathy and concern for humans and other sentient animals and that in the absence of an afterlife, “human beings can act to give their own lives meaning by seeking happiness in this life and helping others to do the same”.

67 thoughts on “It’s official: England and Wales are no longer Christian countries”