Today we have photos from regular Mark Sturtevant. His notes and IDs are indented, and you can enlarge the photos by clicking on them. I’ll remind readers to send in your good photos, as we’re running low.

Here are some pictures of mainly arthropods, taken in 2021 as the weather began to finally warm near my habitat in eastern Michigan.

An early opportunity was a European paper wasp (Polistes dominula) that emerged from hibernation on the front porch. It was still quite cold, so she was motionless most of the time. After a long winter, I was glad to see her even though the species is invasive and problematic in the U.S. because it has reduced populations of the native paper wasps. These pictures are focus stacked from about 100 pictures each, taken with the assistance of a Helicon Fb tube. That is a device that lets you do rapid focus bracketing with a DSLR camera. 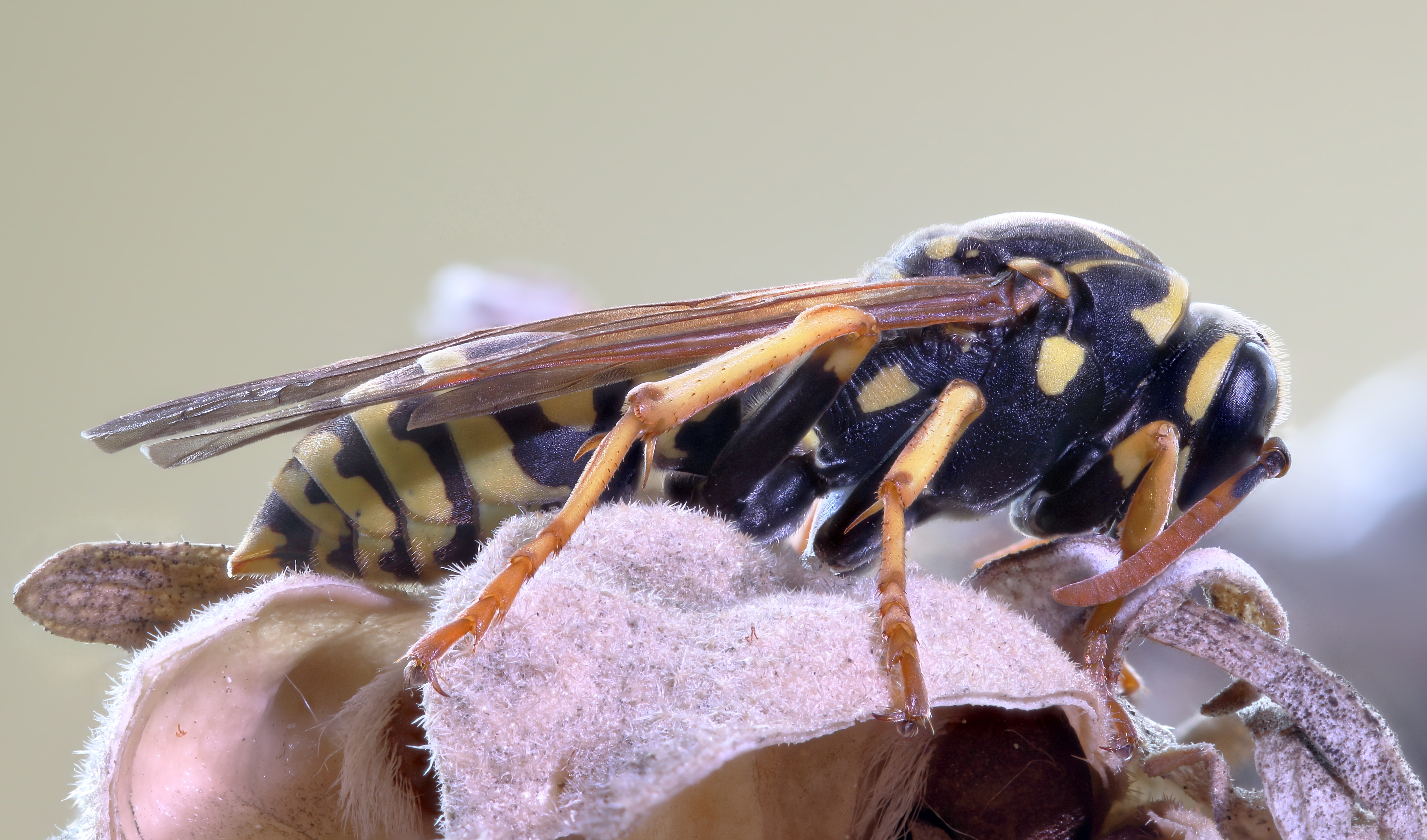 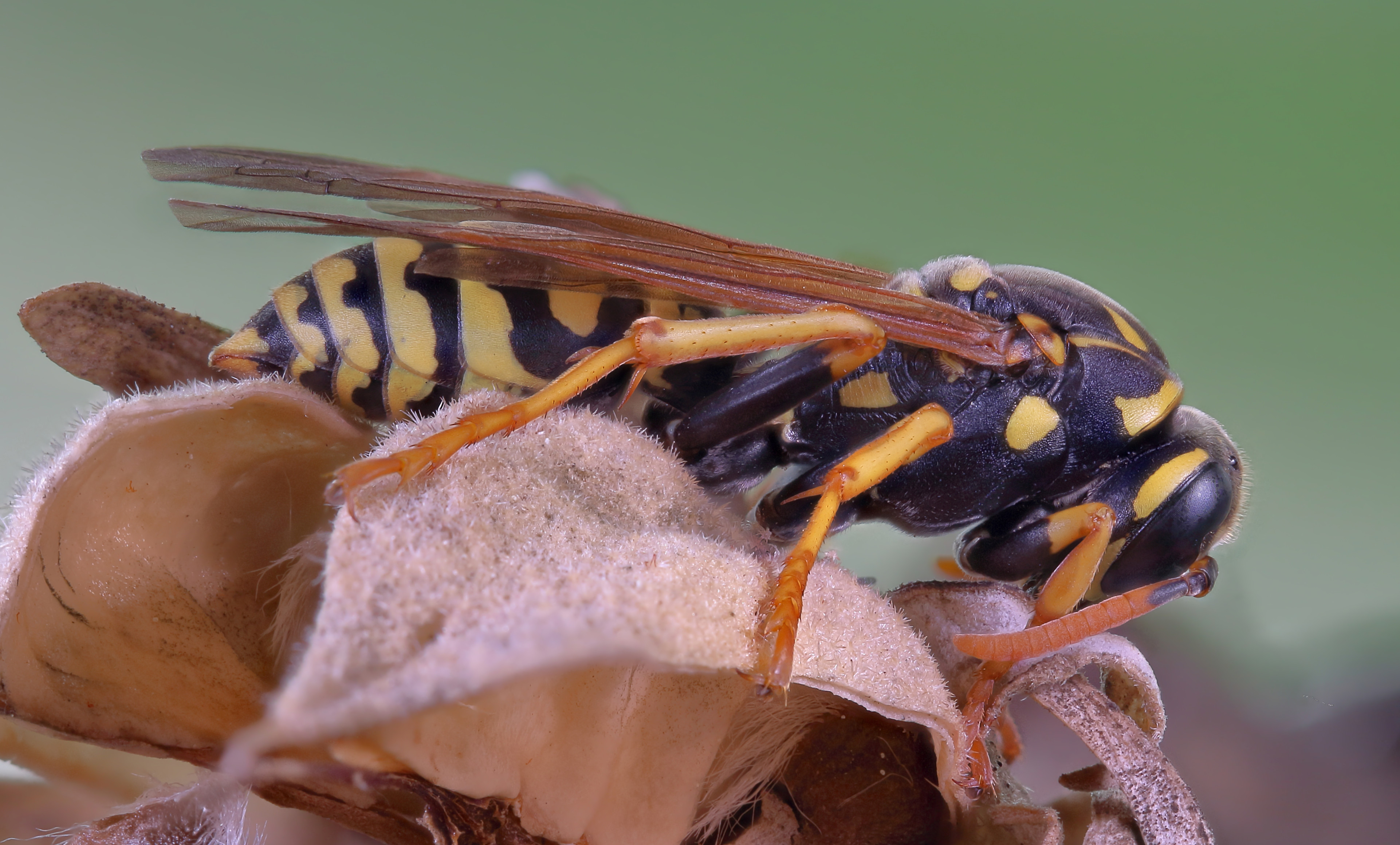 Next is a ground spider (Gnaphosidae), a family of free roaming spiders that include some ant mimics. This is Zelotes fratris. This too is focus stacked, but from a few pictures taken by hand. Note the red velvet mite photo bomb. 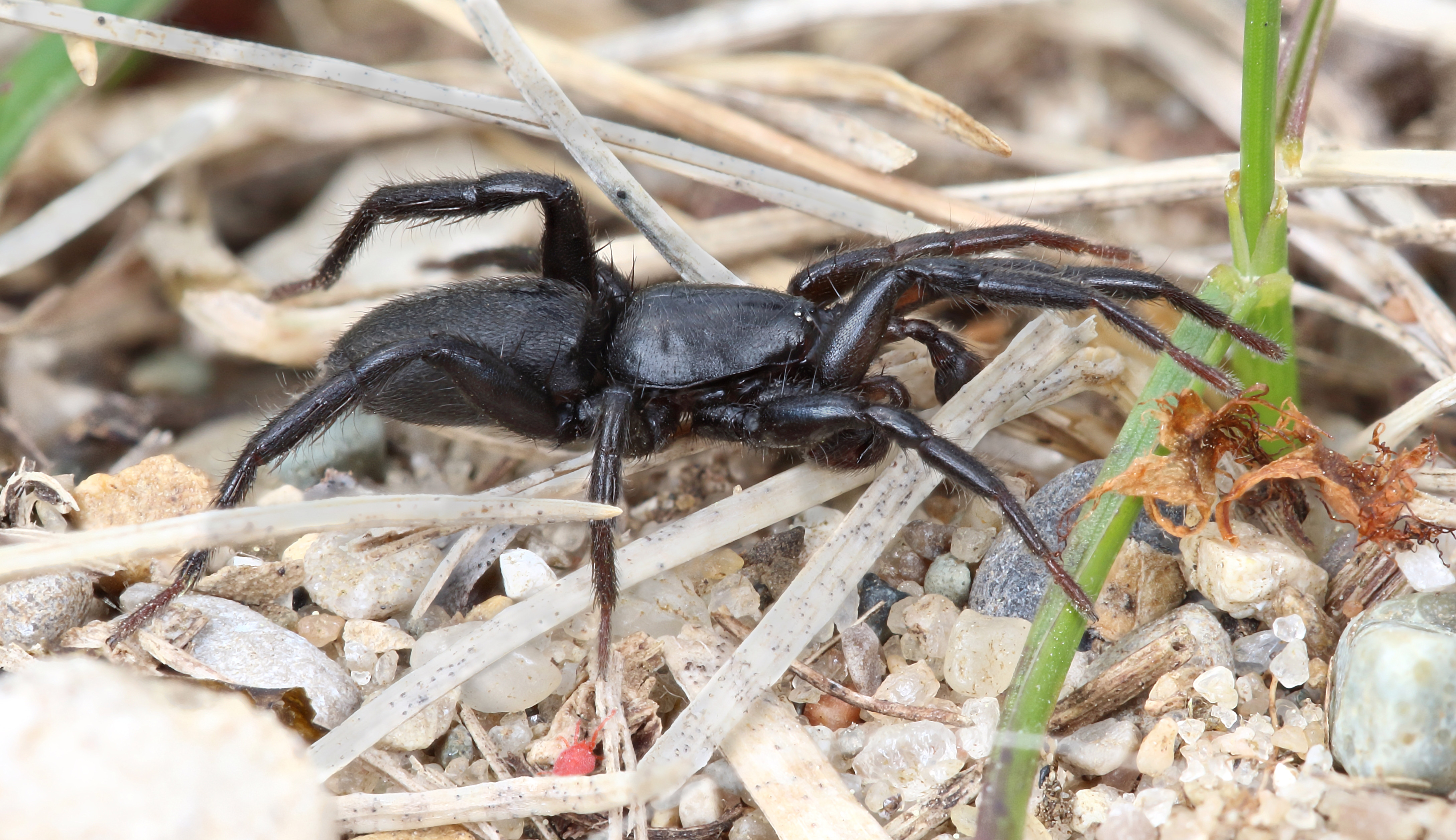 Here is a very young green frog (Lithobates clamitans), only recently transformed from a tadpole. Often mistaken for the closely related bullfrog, green frogs can be identified by the dorso-lateral ridge that you can see here. This youngster may one day grow to be the size of both of your fists put together. 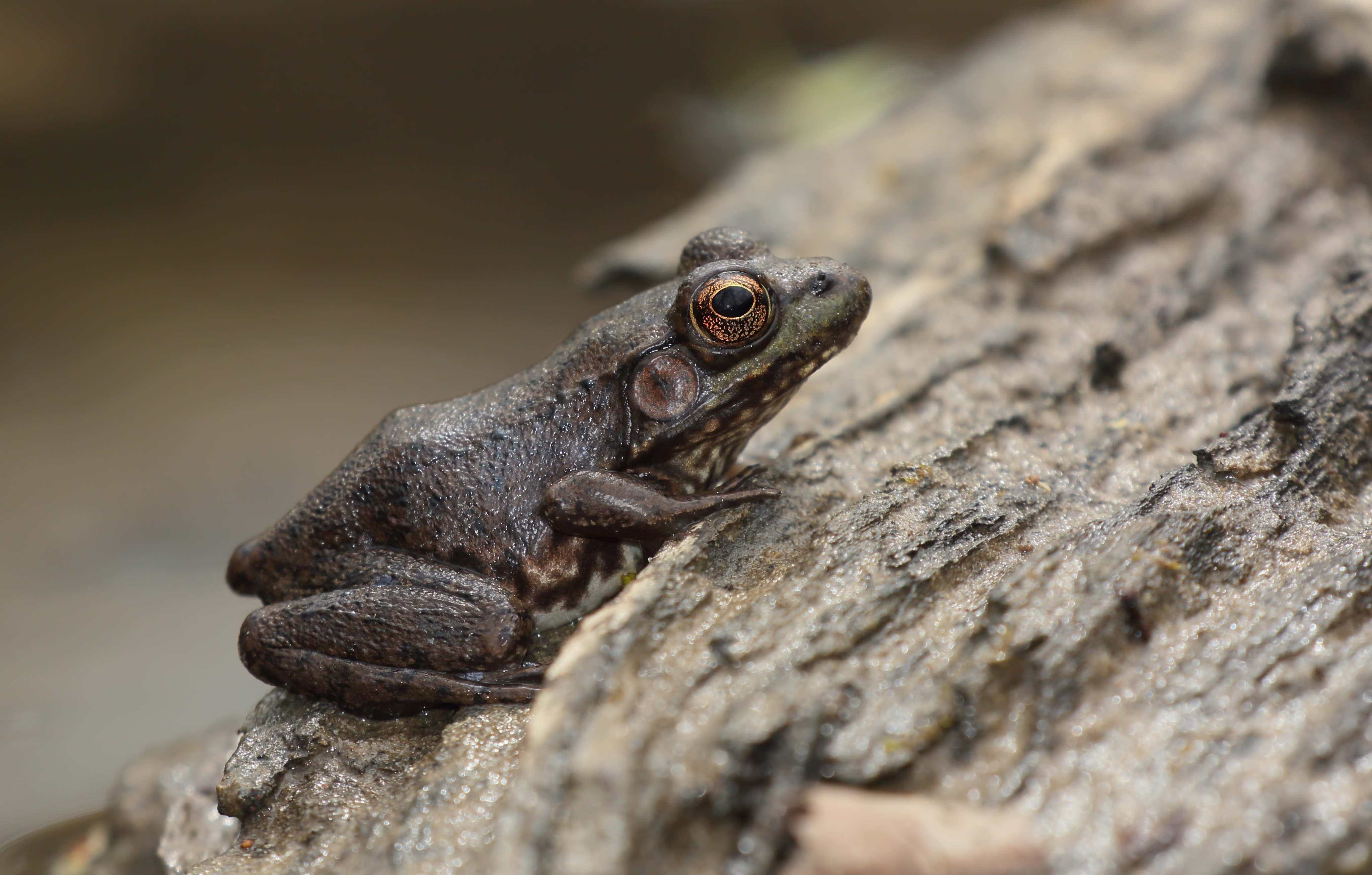 The big event for the early part of the 2021 season was a possibly once-in-a-lifetime chance to photograph 17-year cicadas, Magicicada septendecim. Cicadas spend most of their lives as nymphs living underground, where they feed on sap from tree roots. “Periodical” cicadas include a 13-year species and the 17-year species. After those many years, the nymphs emerge en masse in biblical plague numbers, mate, lay eggs, and die over a period of several weeks. It is believed their reproduction cycle evolved to overwhelm predators who cannot grow their population in response. The 2021 season was due to have “Brood X” of the 17-year cicadas, which is the largest population of this species. Brood X extends over multiple states in the US, and one edge of this group extends into southern Michigan. So, with the help of the internet, which provided records about their last emergence, I made the long drive to a likely park to see this marvel. The trip was well rewarded with high thousands of cicadas.

Here are various pictures showing perching cicadas, and a bush with quite a few of them. Cicadas were flying everywhere, and collisions with them were pretty frequent. Males are especially distinct with their bright red eyes. 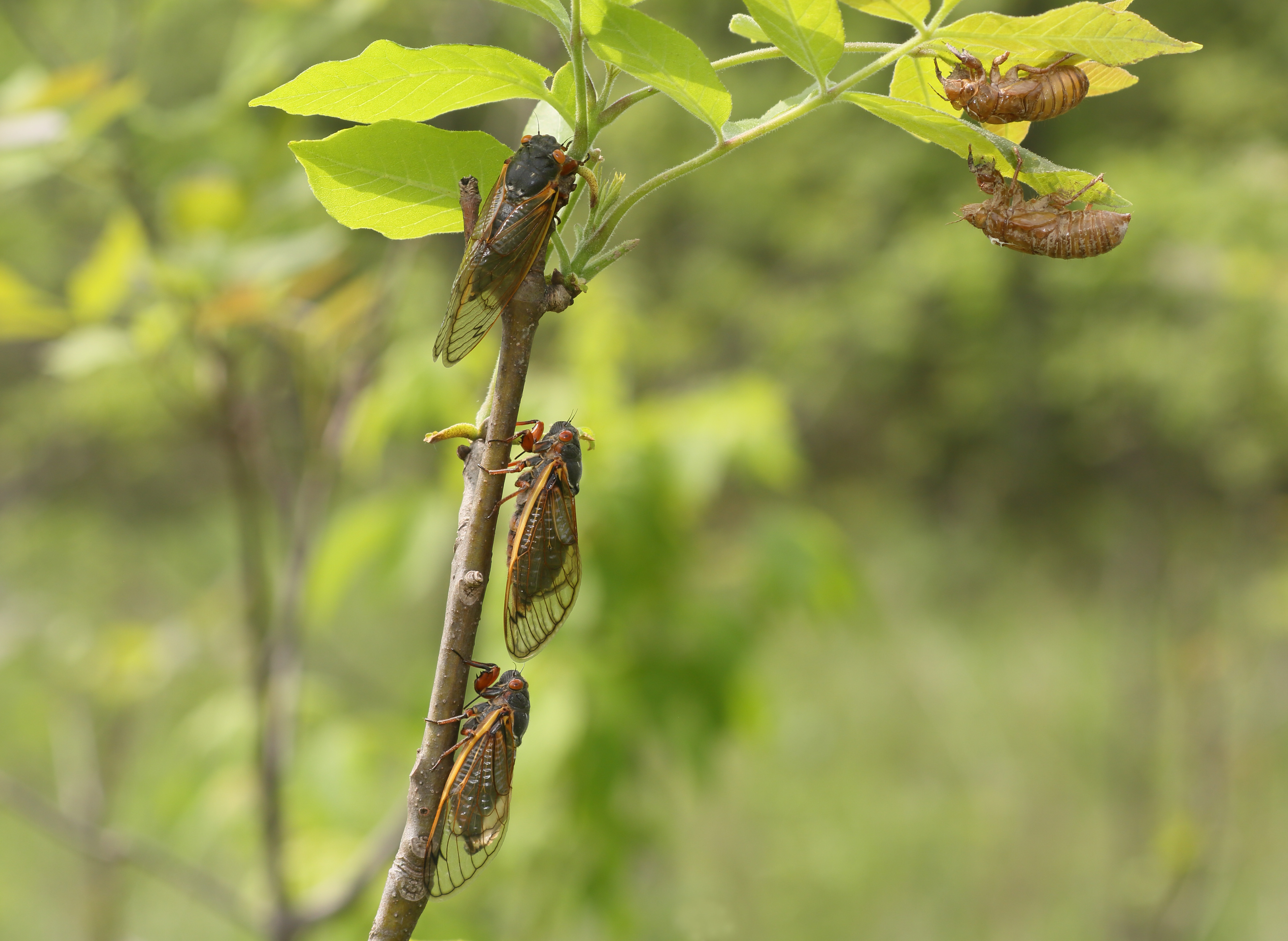 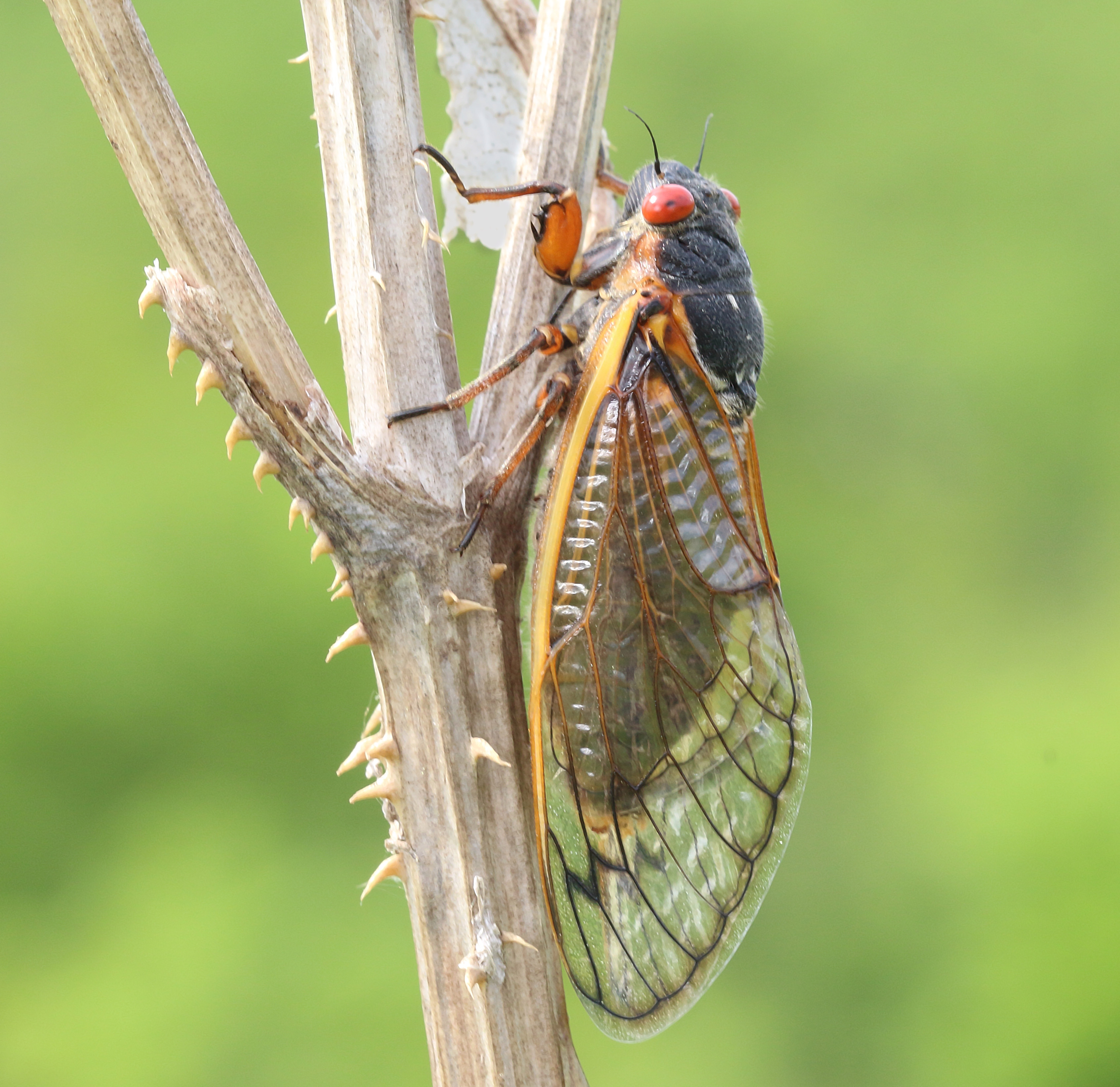 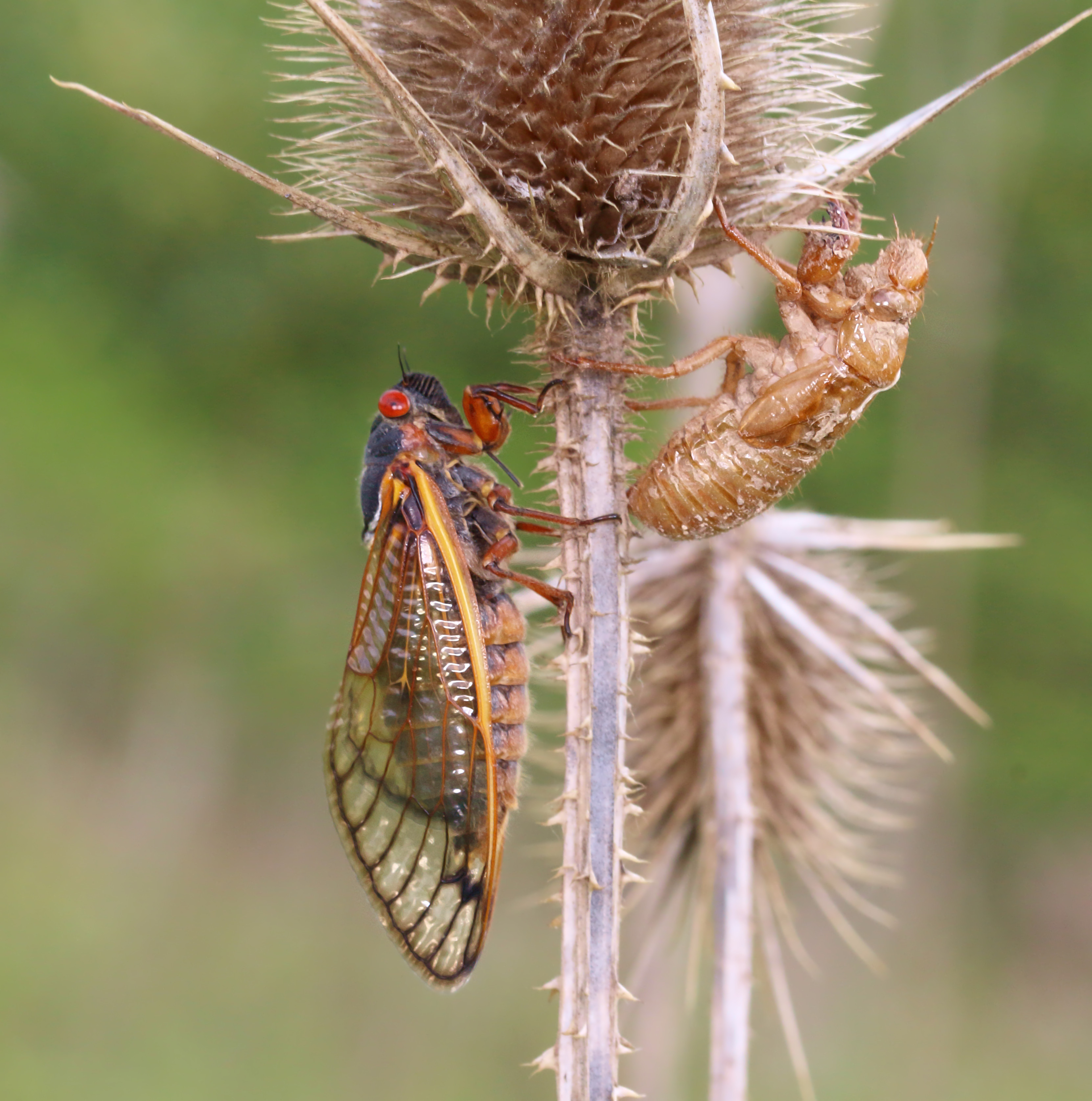 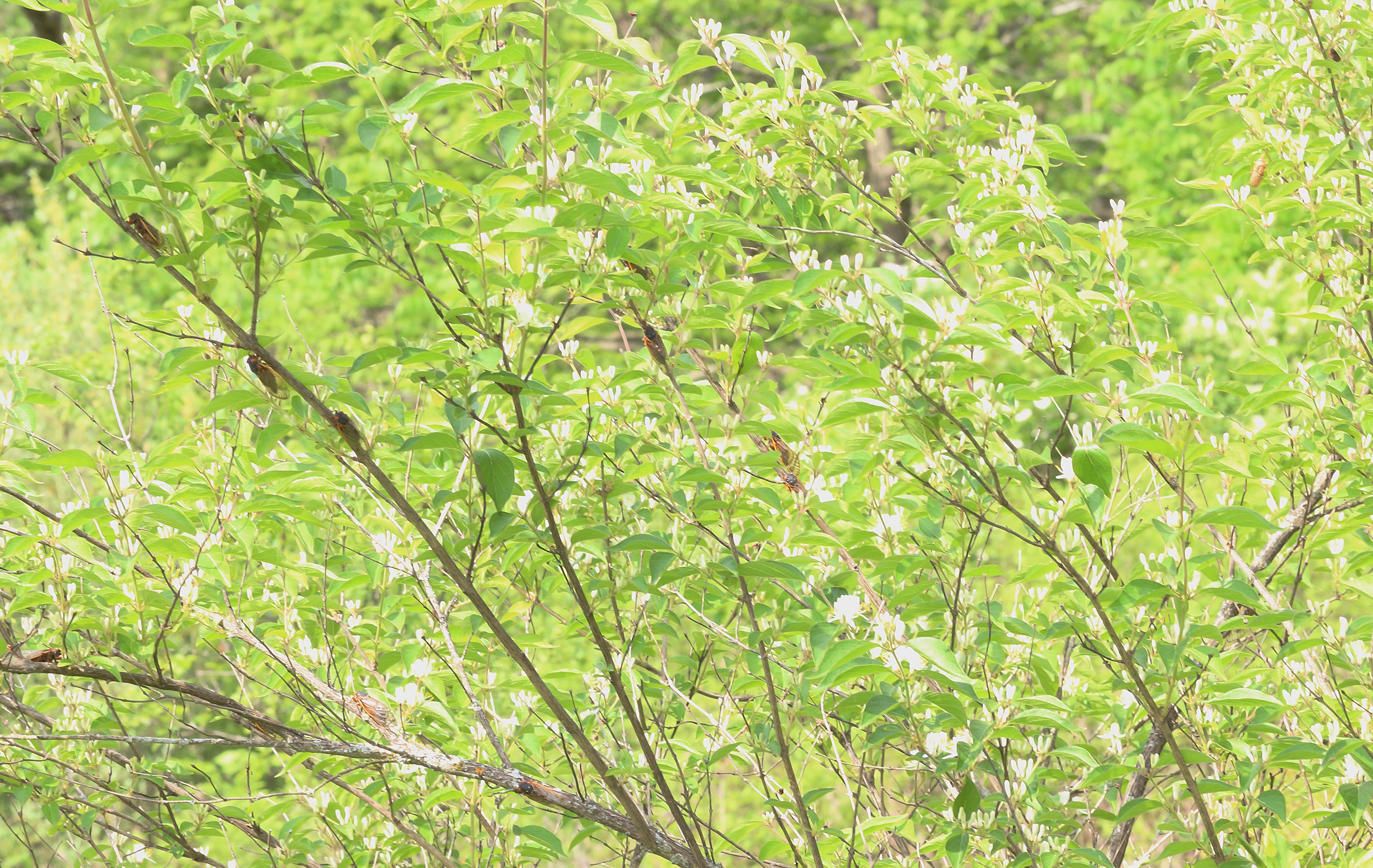 The eerie sound of thousands of cicadas filled the air over the field. But it was evident that there were far more of them in the trees that surrounded the park, since the trees were fairly deafening with their shrill, spooky music. Accounts from other areas of the Brood X emergence described even heavier population densities, where pretty much everything gets covered by them.

It’s the males who sing, and they do so by forcing air past a stack of vibrating membranes under a pair of “tymbal” plates on the abdomen. This picture showing the plates is blurry because the male was continually squalling in protest. 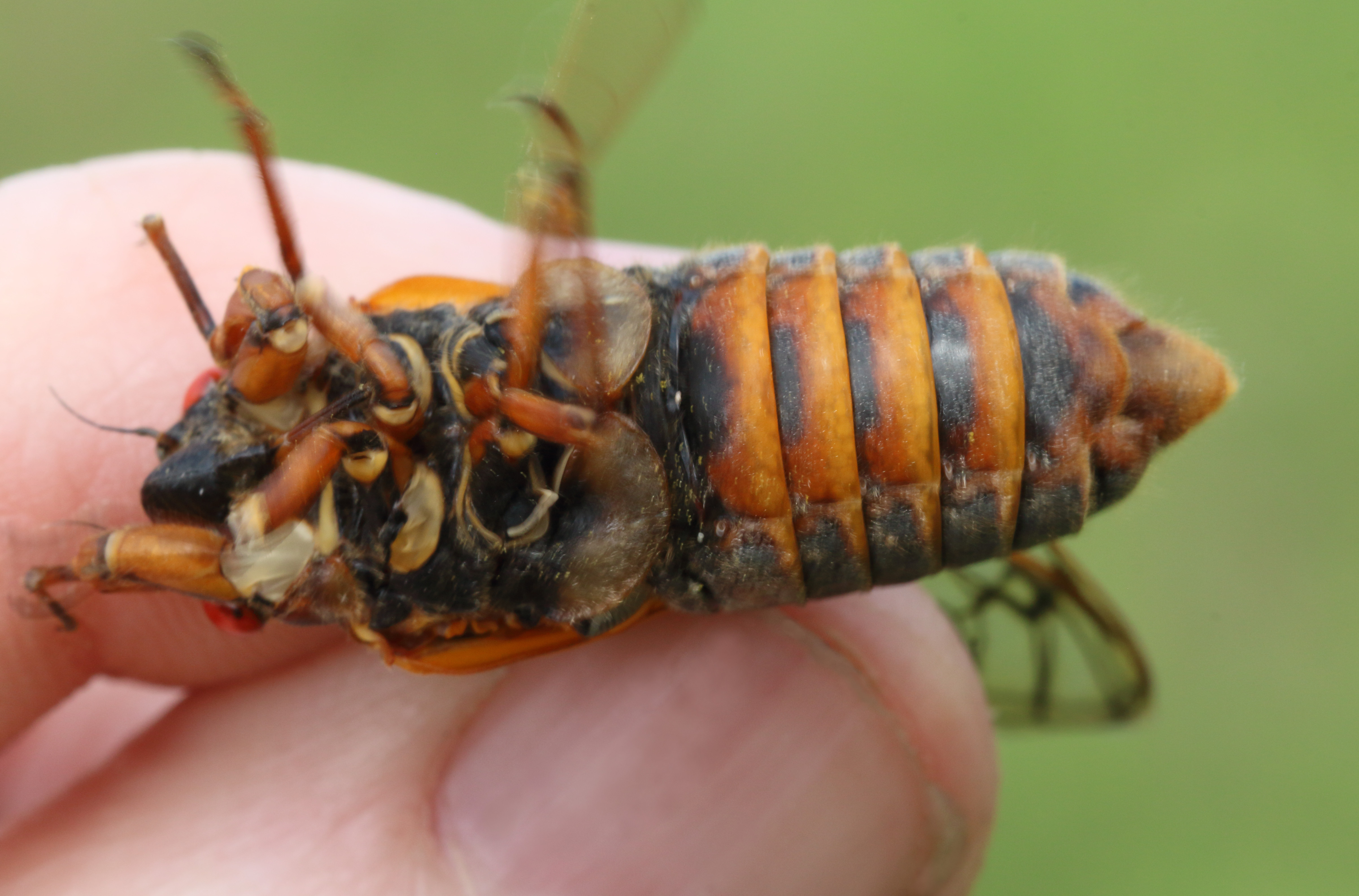 Here is a wide angle macro picture of a cicada posing with my good friend Gary Miller. Gary is an excellent macro photographer in his own right. It was not even summer, and this is one of my favorite pictures of the entire season. 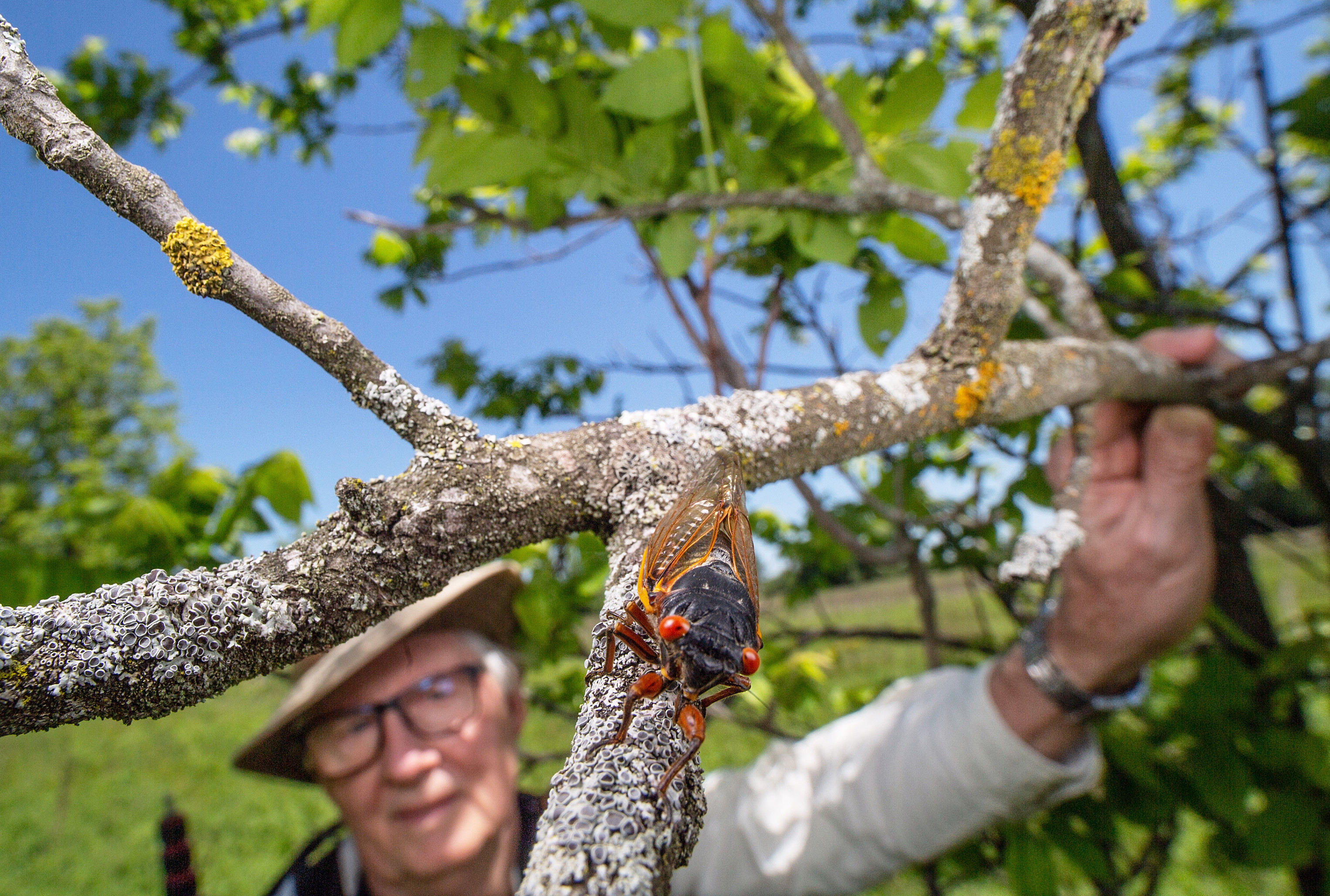 I wanted to find a video that conveys what this natural wonder is like. This amateur recording is a very good match to what the emergence was like in this field, right down to the screaming trees in the distance:

Readers in the eastern U.S. may have direct experience with seeing a periodical cicada mass emergence, and if you’d like to make plans for seeing one, here is a map that can get people started. 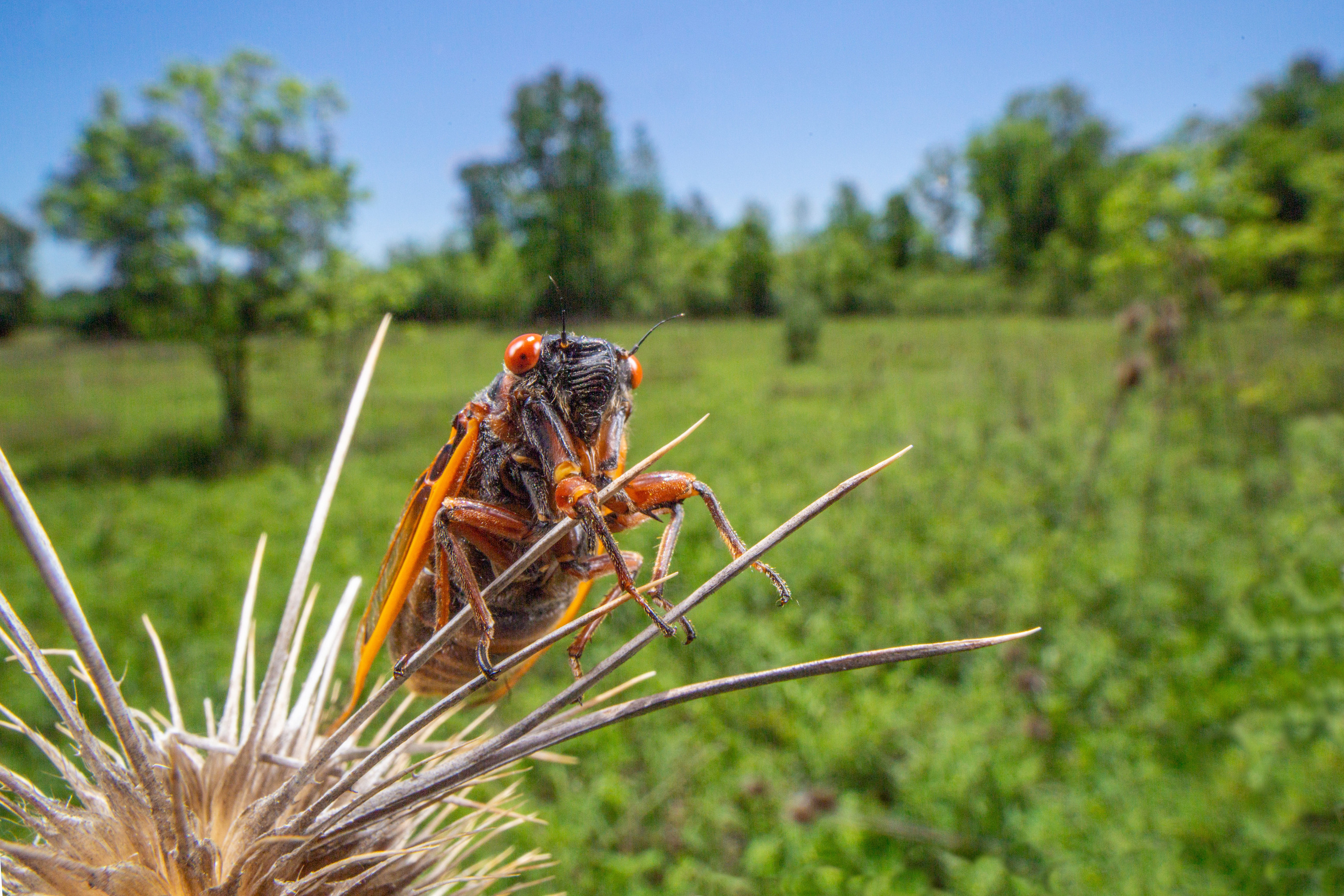