You can thank reader Pyers for the links to two—count them, two—articles about how a student at Cambridge claims that Jesus was a transsexual male, which of course caused a huge fracas. Pyers added this to his links:

And this one must be for the 5* treatment as being idiotic on just so so many levels.  When I read it I just, to use a piece of internet shorthand, PML. [JAC: inquiry reveals that this stands for “pissed myself laughing”]. It is the craziest of the crazy, looniest of loons …Just do what I was tempted to do and bash your head against a wall. It is at moments like this that you thank God you are an atheist! (Big grin for that one.)

The first article’s from the Torygraph:

A quote and picture (bolding is mine):

Jesus could have been transgender, according to a University of Cambridge dean.

Dr Michael Banner, the dean of Trinity College, said such a view was “legitimate” after a row over a sermon by a Cambridge research student that claimed Christ had a “trans body”, The Telegraph can disclose.

The “truly shocking” address at last Sunday’s evensong at Trinity College chapel, saw Joshua Heath, a junior research fellow, display Renaissance and Medieval paintings of the crucifixion that depicted a side wound that the guest preacher likened to a vagina.

Worshippers told The Telegraph they were left “in tears” and felt excluded from the church, with one shouting “heresy” at the Dean upon leaving.

Heath, whose PhD was supervised by the former Archbishop of Canterbury Rowan Williams, also told worshippers that in the Prayer Book of Bonne of Luxembourg, from the 14th century, this side wound was isolated and “takes on a decidedly vaginal appearance”.

Heath also drew on non-erotic depictions of Christ’s penis in historical art, which “urge a welcoming rather than hostile response towards the raised voices of trans people”.

“In Christ’s simultaneously masculine and feminine body in these works, if the body of Christ as these works suggest the body of all bodies, then his body is also the trans body,” the sermon concluded.

A congregation member, who wished to remain anonymous, told Dr Banner in a complaint letter: “I left the service in tears. You offered to speak with me afterwards, but I was too distressed. I am contemptuous of the idea that by cutting a hole in a man, through which he can be penetrated, he can become a woman.

“I am especially contemptuous of such imagery when it is applied to our Lord, from the pulpit, at Evensong. I am contemptuous of the notion that we should be invited to contemplate the martyrdom of a ‘trans Christ’, a new heresy for our age.”

Here is PROOF—one of the pictures shown during Heath’s sermon. You have to do a really logical stretch to see that as a vagina. It’s not even in the right place! 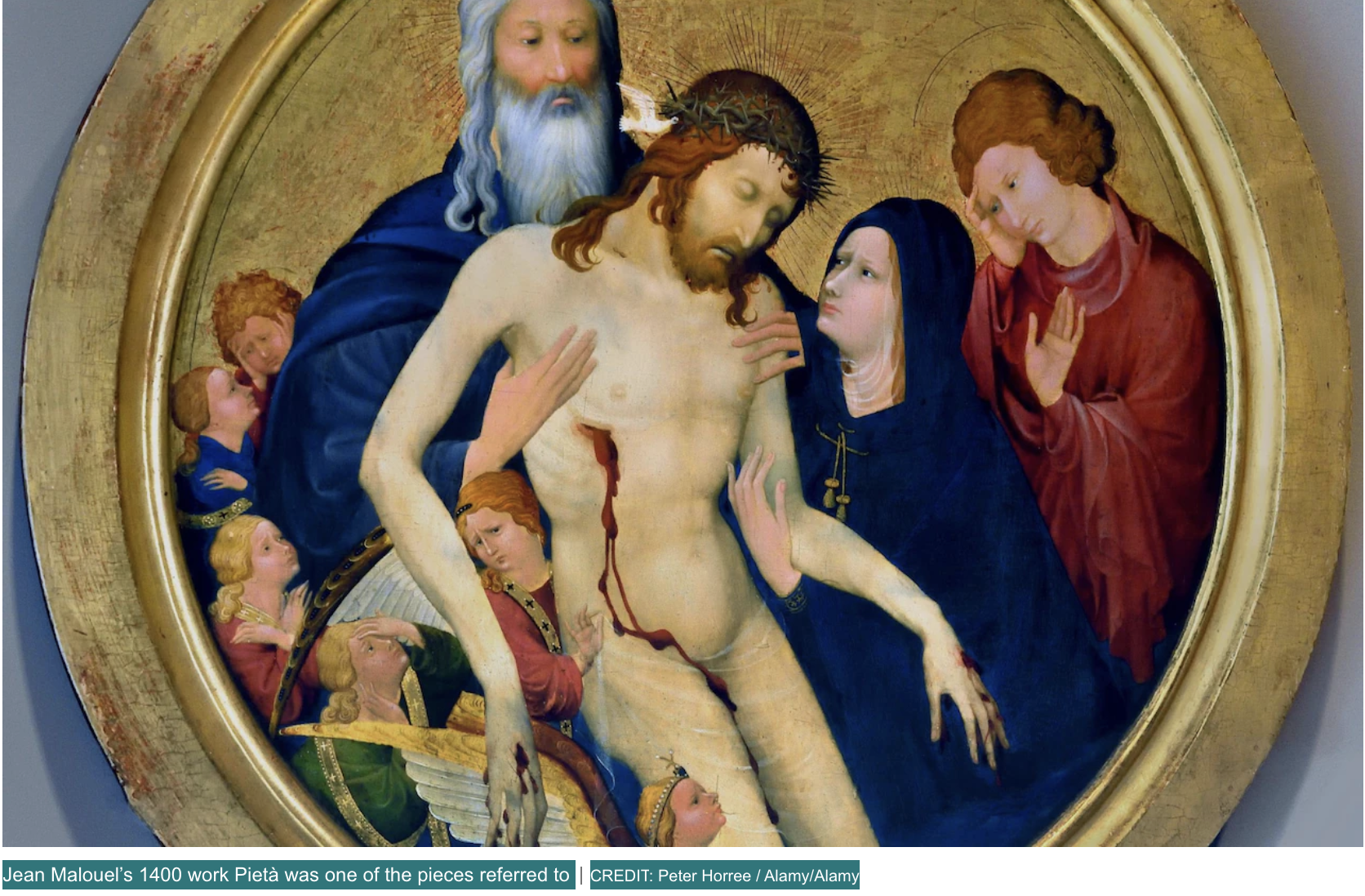 And here’s how Dean Banner defended the claim. Note that he often gives BBC Radio 4’s “Thought for the Day”, which is usually a religious homily. Dawkins did it once, and that was the last time they used an atheist!

Dr Banner’s response to the complaint, seen by The Telegraph, defended how the sermon “suggested that we might think about these images of Christ’s male/female body as providing us with ways of thinking about issues around transgender questions today”.

“For myself, I think that speculation was legitimate, whether or not you or I or anyone else disagrees with the interpretation, says something else about that artistic tradition, or resists its application to contemporary questions around transsexualism,” Dr Banner added.

Dr Banner, who frequents BBC Radio 4’s Thought for the Day, said that while the views were the speaker’s own, he “would not issue an invitation to someone who I thought would deliberately seek to shock or offend a congregation or who could be expected to speak against the Christian faith”.

Click to read the more heated piece from the Daily Fail:

The Fail doesn’t add much to the above, but does give an official quote form the Uni:

A spokesperson for Trinity College said: The College would like to make clear the following:

‘Neither the Dean of Trinity College nor the researcher giving the sermon suggested Jesus was transgender.

‘The sermon addressed the image of Christ depicted in art and various interpretations of those artistic portrayals.

‘The sermon’s exploration of the nature of religious art, in the spirit of thought-provoking academic inquiry, was in keeping with open debate and dialogue at the University of Cambridge.’

Now it’s barely possible that some randy medieval artist deliberately painted Jesus’s wound to resemble a vagina. But since I’m not convinced that Jesus really existed as any real person, much less as a divine human/son of God/part of God, I can’t be bothered worrying about his gender. The whole fracas is simply hilarious, instantiating what happens when one religion, Christianity, collides with another—wokeness.