Persistent insomnia, which has dogged me across the U.S., will probably lead to a truncated Hili dialogue today. But welcome to Tuesday, the cruelest day, and the first day of November 2022. It’s National Bison Day, and these food months:

If you’re so inclined, you’re welcome to call to our attention notable events, births, or deaths on this day by consulting the November 1 Wikipedia page.

*A suspect, David DePape, 42 has been apprehended in the hammer attack on Nancy Pelosi’s husband Paul.  It turns out that what he wanted with the Speaker of the House, who was in Washington, was to break her kneecaps à la Nancy Kerrigan:

The suspect, David DePape, 42, was apprehended by the police at the Pelosi home in the early morning hours on Friday. The police said he forcibly entered through the back door of the house, encountered Ms. Pelosi’s husband, Paul Pelosi, 82, and, following a struggle over a hammer, struck him with it.

Mr. DePape was looking for Ms. Pelosi, who was in Washington at the time, to interrogate the speaker on an unspecified political matter, according to the federal complaint. If she told the “truth,” he would let her go; if she “lied,” he intended to break her kneecaps because he saw her as “the ‘leader of the pack’ of lies told by the Democratic Party” and wanted her to be wheeled into Congress as a lesson to other Democrats, Mr. DePape told police officers in an interview.

He had “a roll of tape, white rope, a second hammer, a pair of rubber and cloth gloves, and zip ties” according to the U.S. Attorney’s Office for the Northern District of California, which filed the charges.

The swift action by the Justice Department in bringing federal charges — on the same day the San Francisco District Attorney’s Office was expected to file its own charges against Mr. DePape — reflects the department’s urgency in addressing what it sees as a politically motivated crime shortly before the 2022 midterm elections. There has been a surge in threats and attacks against figures of both political parties in recent years, and Ms. Pelosi, in particular, has long been the subject of vilification and threats.

*Like me, many of you listened to the Supreme Court hearings on affirmative action yesterday. I was surprised by the cordial and professional tone of the hearings, and the rapid back-and-forth between the Justices and the lawyers, who had a response to everything. It’s no surprise, haven’t heard the hearing, that the Washington Post called its report on the hearings, “Supreme Court seems open to ending affirmative action in college admissions.”

After nearly five hours of oral argument, the programs at Harvard College and the University of North Carolina at Chapel Hill seemed endangered. The question is how broad such a decision might be, and what it would mean for other institutions of higher education.

Overturning the court’s precedents that race can be one factor of many in making admission decisions would have “profound consequences” for “the nation that we are and the nation that we aspire to be,” Solicitor General Elizabeth. B. Prelogar told the justices during arguments in the Harvard case. She said educating a diverse group of national leaders had consequences for the military, medical and scientific communities and corporate America.

But the court’s conservatives took the two cases to revisit decades of Supreme Court decisions that tolerated a limited use of racial classifications, and seemed unsatisfied with assertions from lawyers representing the schools that the end was near for the use of race-conscious policies. Under repeated questioning, those lawyers conceded they could not provide a date-specific answer to the question: “When will it end?”

I doubt it will end, if it ever does, for decades, for that’s what it will take to create a level playing field for all Americans, and even so, what about the enormous DEI apparatus in colleges and businesses. They won’t want to be out of a job.

*The elections are on us, and here’s the latest prognostication from Five Thirty Eight. The Senate is a tossup, and the House may well go Republican: 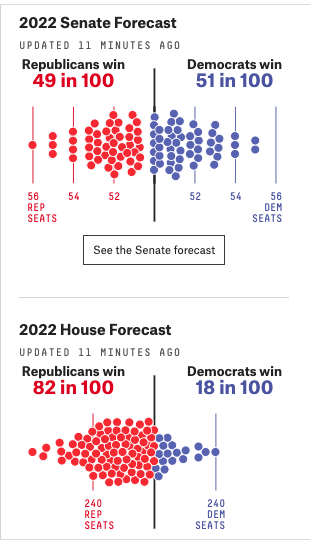 The site also has an article called “What happened to Stacey Abrams?“, which is a good question. It looks as if she may well lose the Georgia gubernatorial race again:

Four years ago, Stacey Abrams had the world at her feet. Yes, she had just lost Georgia’s gubernatorial race to Gov. Brian Kemp by fewer than 60,000 votes — but after such an unexpectedly tight contest, she was heralded by the Democratic Party as a promising new leader. There was speculation about whether she’d be chosen as Joe Biden’s running mate during his 2020 bid for the presidency (a prospect Abrams welcomed), and she was largely credited for pioneering a new playbook focused on turning out Black voters in Georgia, especially after Biden flipped the state in 2020. Though Biden eventually tapped then-Sen. Kamala Harris of California to share the ticket, Abrams kept her eyes on the governor’s mansion. But she enters this year’s race as even more of an underdog than she was in 2018.

Most recent surveys of the race consistently show Abrams, a former minority leader in Georgia’s state House, trailing Kemp by single digits, according to FiveThirtyEight’s polling average as of this past Friday at 12 p.m. Eastern. (All data in this article is as of this date and time.) An October poll from Data for Progress, though, found that the Republican held a lead of 10 percentage points over Abrams — 3 points more than when the firm last polled the race, in September. And while Abrams had stronger support among Democrats than Kemp did with Republicans, according to a September Monmouth University survey, the pollsters also concluded that Abrams’s path to victory this year was “much narrower.”

Abrams’s campaign is also attracting a lot less buzz this year compared with the frenetic excitement of her candidacy in 2018. That stands out because there’s a significant gap between Abrams’s polling against Kemp versus that of Sen. Raphael Warnock, another Democrat on the ballot, who is running for reelection against Republican Herschel Walker.

Abrams would have been a much better Vice-President than Kamala Harris, and that might have vaulted her to the echelons of power.

*The Russians are going hard after Ukraine’s infrastructure, attacks that target civilians and their facilities and must surely constitute war crimes. As the Associated Press reports,

A massive barrage of Russian cruise missile and drone strikes hit critical infrastructure in Kyiv, Kharkiv and other Ukrainian cities early Monday, knocking out water and power supplies in retaliation for what Moscow alleged was a Ukrainian attack on its Black Sea Fleet.

Russia has intensified its attacks on Ukraine’s power plants and other key infrastructure as the war enters its ninth month, forcing rolling power cuts.

“The Kremlin is taking revenge for military failures on peaceful people who are left without electricity and heat before the winter,” Kyiv region Gov. Oleksii Kuleba said.

Russian President Vladimir Putin confirmed that Monday’s bombardment was meant to retaliate for what he said was Saturday’s unsuccessful Ukrainian aerial and underwater drone attack on Russia’s Sevastopol-based Black Sea Fleet on the Russian-annexed Crimea Peninsula.

I’m getting more and more afraid that, pressed in this way, Zelensky will decide to negotiate with Putin, and that means that Ukraine may give up more of its eastern territory formally to Russia. But who knows what will happen: Putin is a loose cannon.

*Some good news to end. I’ve written before about the bar-tailed godwit (Limosa lapponica) is the world’s migratory-bird champion, sometimes flying nonstop from its breeding grounds in Alaska to overwintering grounds in Australia or New Zealand. Yes, that’s right: they don’t stop to eat, drink, and lord knows how or whether they sleep. Now one of them has set the nonstop flight record as far as we know:

A young bar-tailed godwit appears to have set a non-stop distance record for migratory birds by flying at least 13,560 kilometers (8,435 miles) from Alaska to the Australian state of Tasmania, a bird expert said Friday.

The bird was tagged as a hatchling in Alaska during the Northern Hemisphere summer with a tracking GPS chip and tiny solar panel that enabled an international research team to follow its first annual migration across the Pacific Ocean, BirdLife Tasmania convenor Eric Woehler said. Because the bird was so young, its gender wasn’t known.

Aged about five months, it left southwest Alaska at the Yukon-Kuskokwim Delta on Oct. 13 and touched down 11 days later at Ansons Bay on the island of Tasmania’s northeastern tip on Oct. 24, according to data from Germany’s Max Planck Institute for Ornithology. The research has yet to be published or peer reviewed.

The bird was again tracking southwest when it flew over or near Kiribati and New Caledonia, then past the Australian mainland before turning directly west for Tasmania, Australia’s most southerly state. The satellite trail showed it covered 13,560 kilometers (8,435 miles) without stopping.

Guinness World Records lists the longest recorded migration by a bird without stopping for food or rest as 12,200 kilometers (7,580 miles) by a satellite-tagged male bar-tailed godwit flying from Alaska to New Zealand.

They don’t know if it was alone or part of a flock, but if it was alone, it would have had to navigate on its own because it was a first-year migrant. And that would be something!

Here’s one in flight: 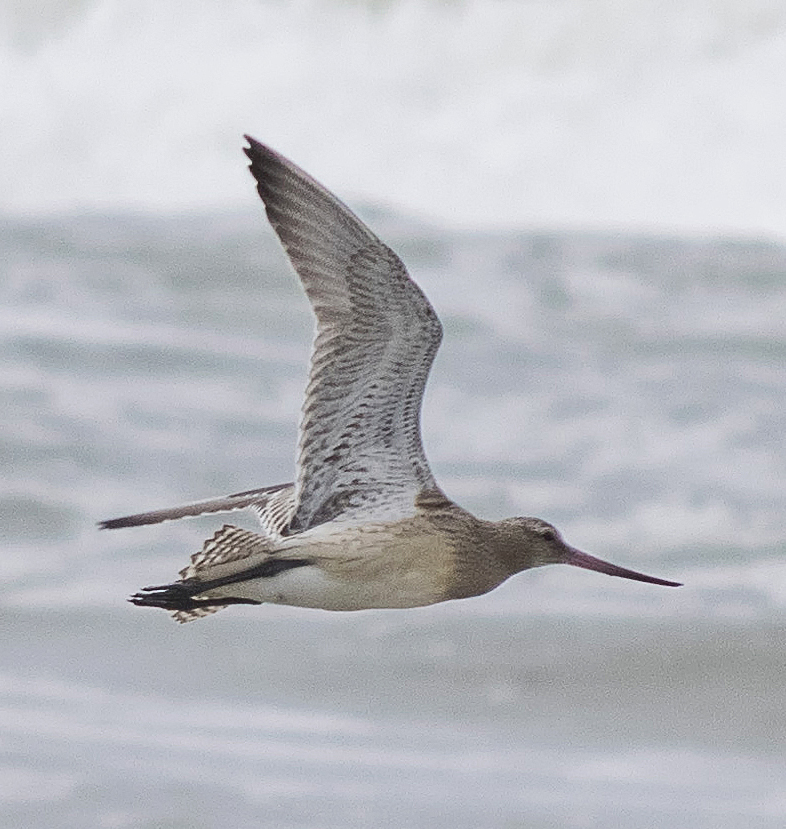 Meanwhile in Dobrzyn, Hili tells us how she communicates:

Hili: Sometimes I can’t find words.
A: And then what?
Hili: I meow. 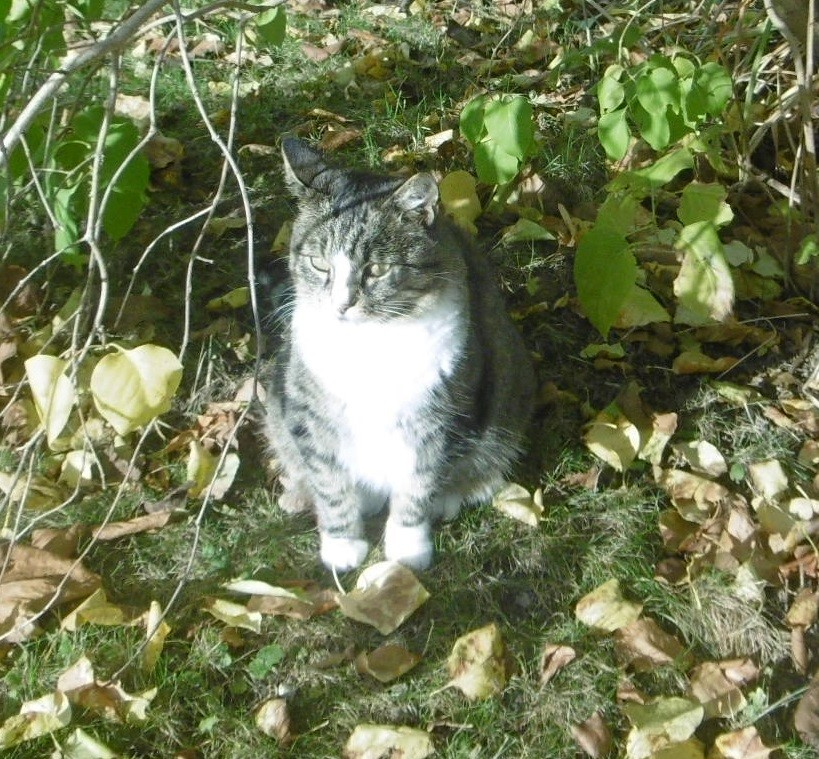 A picture of baby Kulka in the trees, snapped by Paulina: 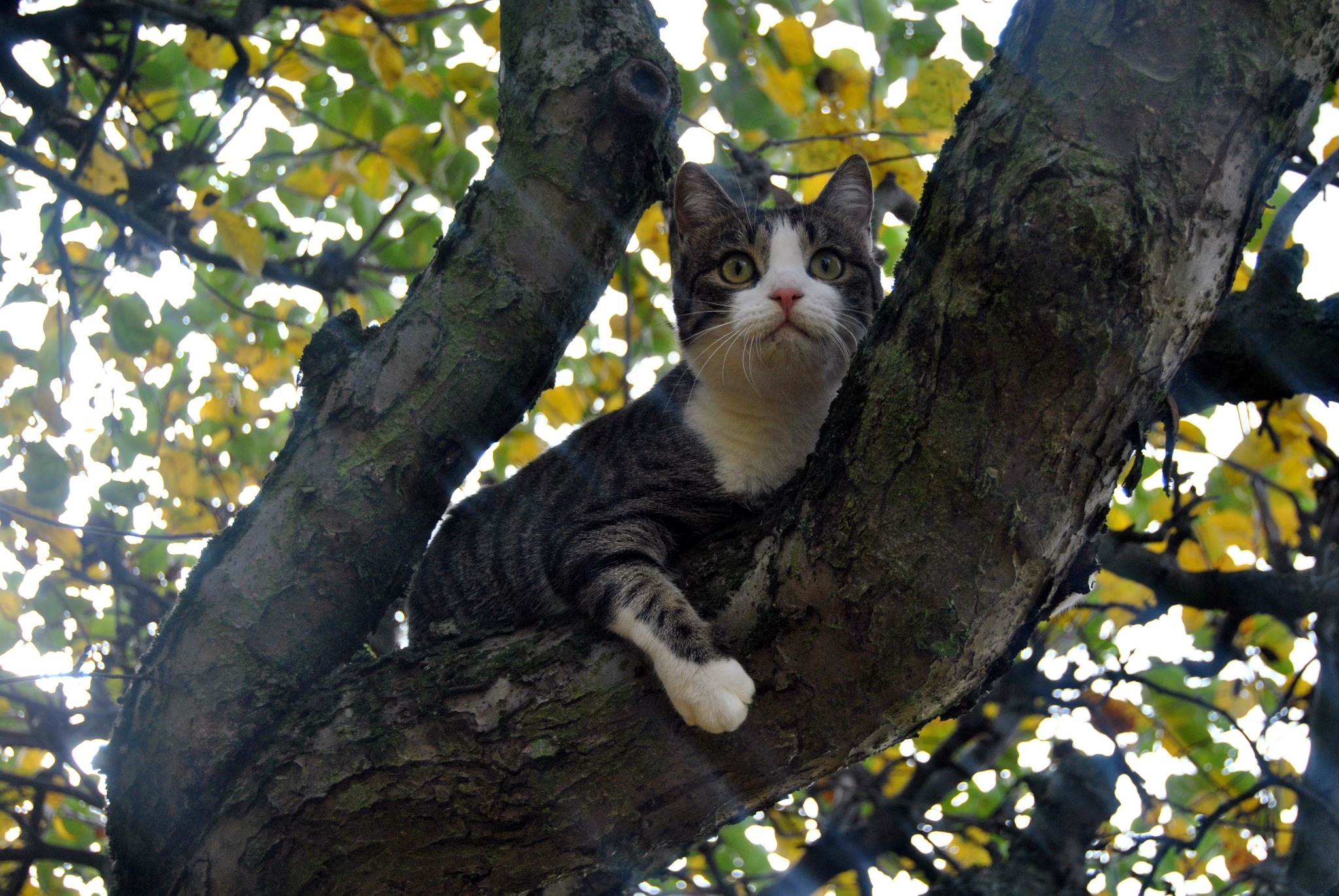 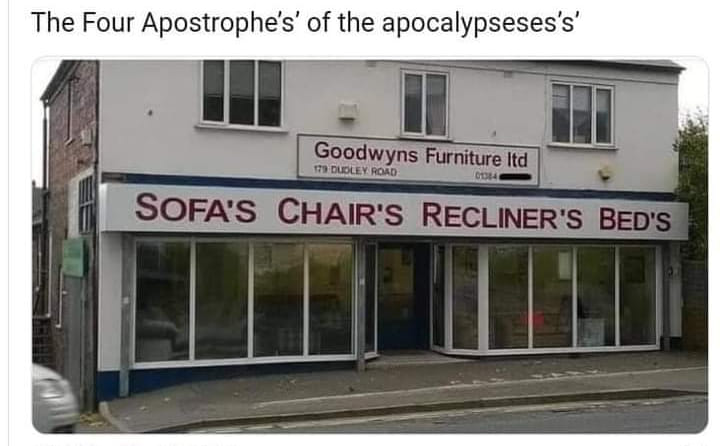 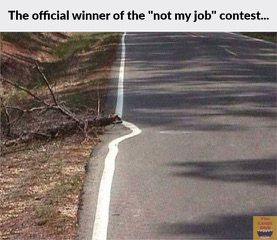 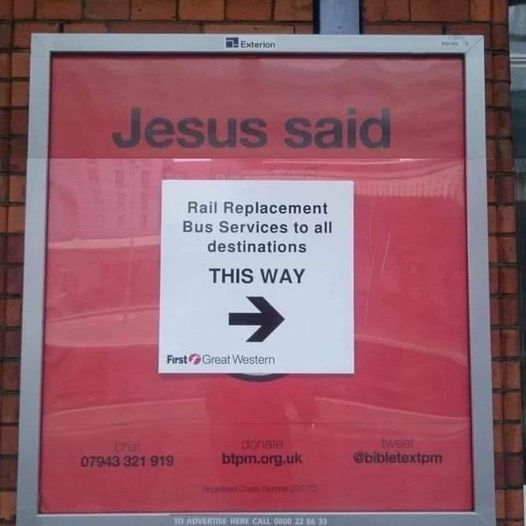 From Nicole: Stanley the runner duck, dressed as a pumpkin, wishes you happy Halloween: 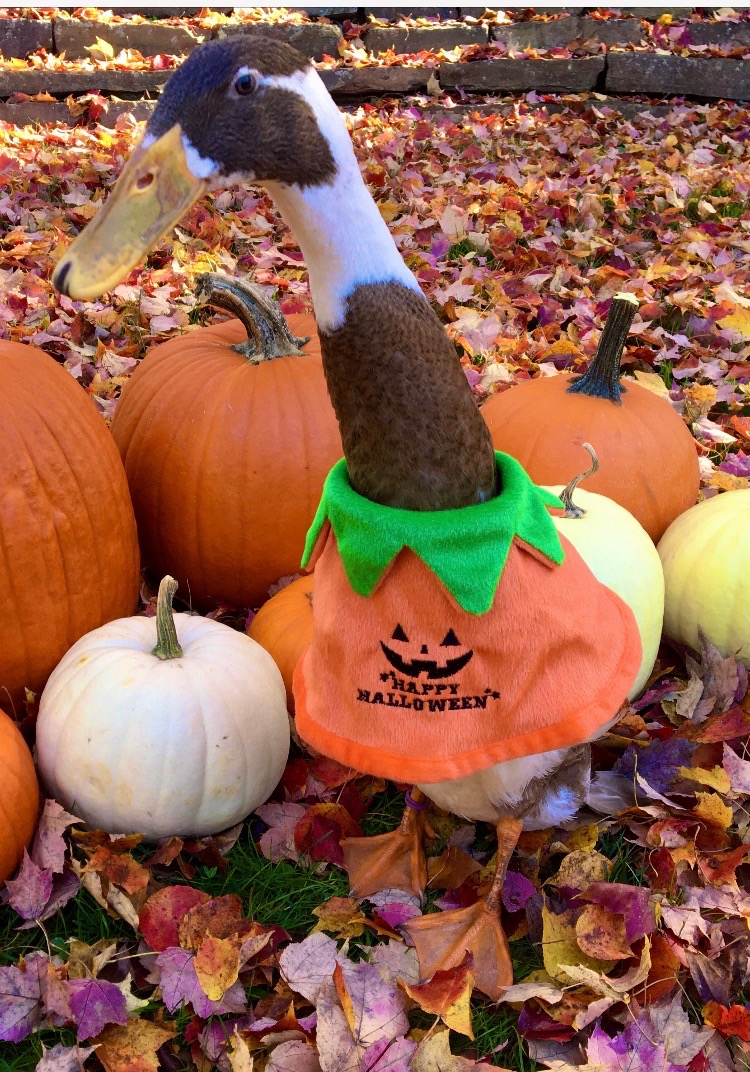 Halloween is My third favorite pagan holiday after Christmas and Easter.

Two from Masih: first, a martyr to the Iranian Revolution:

“We the people of the Middle East, get killed in war, some in prison, some on the road, some in the sea or on the mountains. Our job is to die."
Komar Daroftadeh 16, got killed by the security forces in Iran uprising.#MahsaAmini pic.twitter.com/N9grosaqTl

And her fiery speech in New York City:

“We don’t have any other options but to win”.
Angered Iranian and Ukrainian activists are united in Times Square in New York seeking the world’s help.
My call for action:
Our unity against united dictators must be stronger than ever.

From Simon, who adds, “As the man says, wow.” A preacher takes apart the odious Herschel Walker. (I have to add that I think this politicking from the pulpit is illegal, and could cost the church its tax exemption.)

Wow. This dismantling of Herschel Walker by Pastor @jamalhbryant is incredible. pic.twitter.com/QhCaNjTuaJ

From Ken, who notes, “Dinesh D’Souza, count on him to take the low road.” Indeed!

Moderate voters just checking in for the first time since 2020, THIS is the 2022 Republican Party. pic.twitter.com/WQNHK33S0I

From Malcolm. I do not think it would be pleasant to live here:

A train that runs through residential apartments in China. pic.twitter.com/X8k7lp5aJH

From the Auschwitz Memorial: a man who lasted but five weeks in the camp.

Cat at the till!

It’s November 1 and already we have a Tweet of the Month. Here we have a lovely woman and a great cat lover. Sound up:

Woman crawls through 300 feet of sewer to save a kitten who sleeps on her head now 💤 @Op__Liberation pic.twitter.com/Zz75HidgR3