Yesterday my friend Phil and I took a long hike (though it was only 3.4 miles long, it was a tortuous path with ups and downs) in the Sierra Nevada foothills: we took the Western States Trail near Auburn, which connects with other trails going all the way east to Lake Tahoe.

There are several viewpoints looking down to the North Fork of the American River, below. About fifty years ago they proposed to build the Auburn Dam here, which would have filled this beautiful valley with water. But the project ran out of money, and work on the dam was suspended.  I am glad. Think of all the animals and plants that would be killed by this flooding! But some day they may finish the dam. 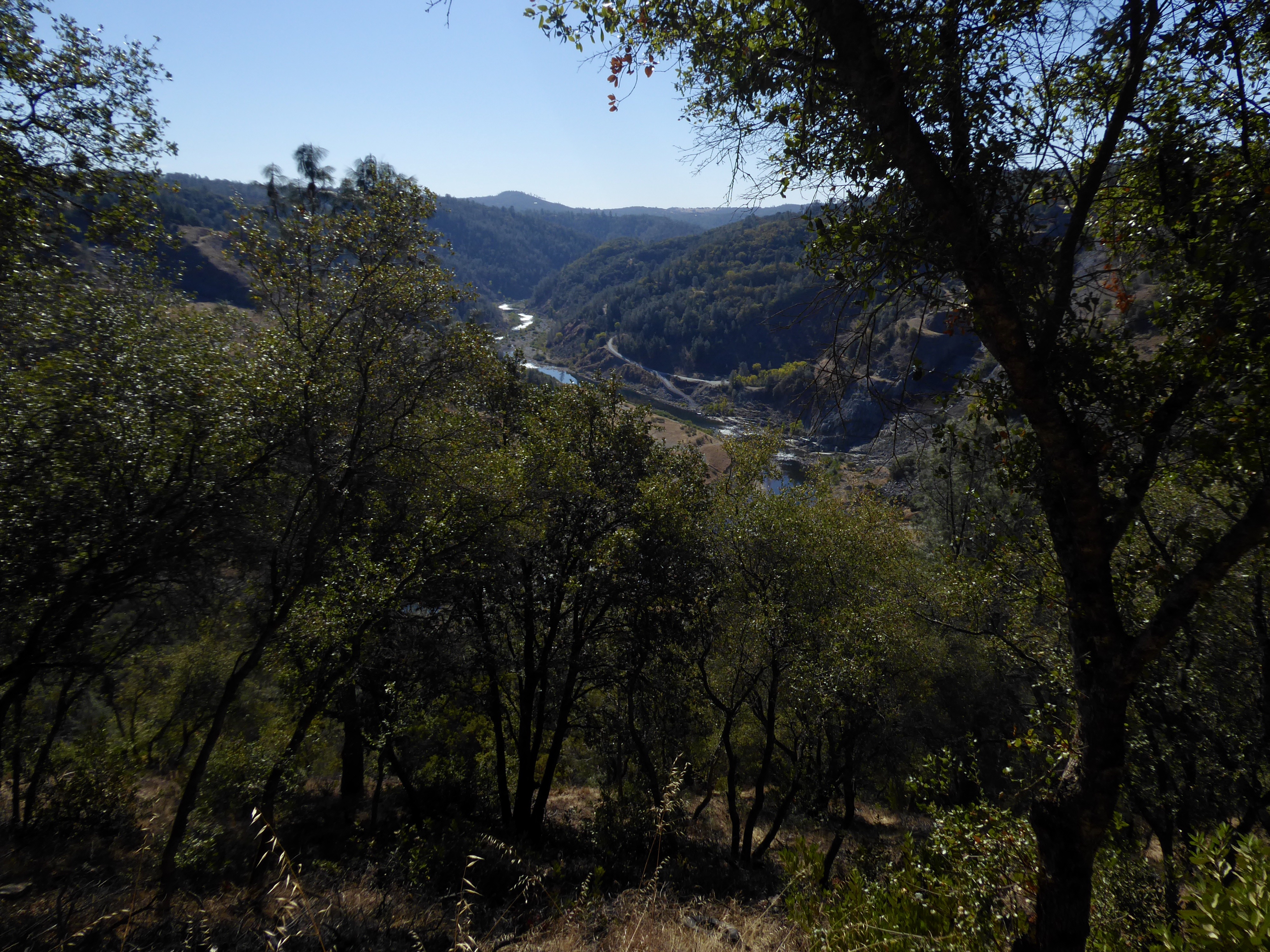 We found a vine of wild grapes (Vitis vinifera, the ancestor of Concord grapes) and decided to mash them up to see if black flies (D. persimilis or D. pseudoobscura, species I worked on) could be caught. Their ecology, including what adults and larvae feed on, is virtually unknown, and I spent a long time during my postdoc trying to find out, No success. Here we have a native, wild-grown berry that might attract flies, so we put a grape moosh in a vial and left it during our hike. 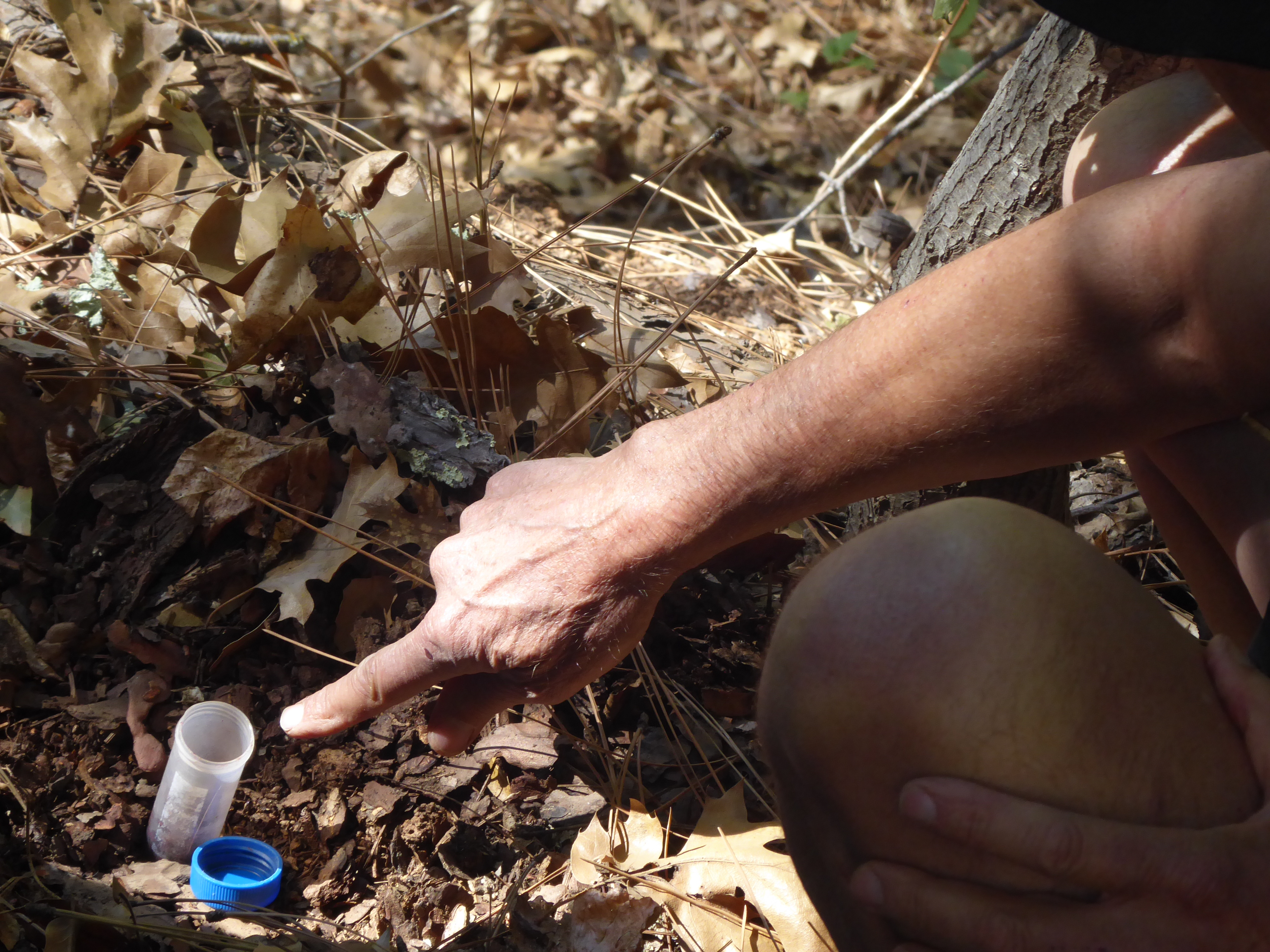 Phil placing the grape mash in a cool area at the base of a tree. Sadly, when we returned there were no flies, or other insects, on the mash. It’s curious that two of the most genetically well-studied species of Drosophila (by Dobzhansky, my academic grandfather) have an ecology that’s a mystery. This is also true of D. melanogaster, the genetically best-studied species of fruit fly, but where it lives in Africa—if it’s still extant in the wild—is unknown. 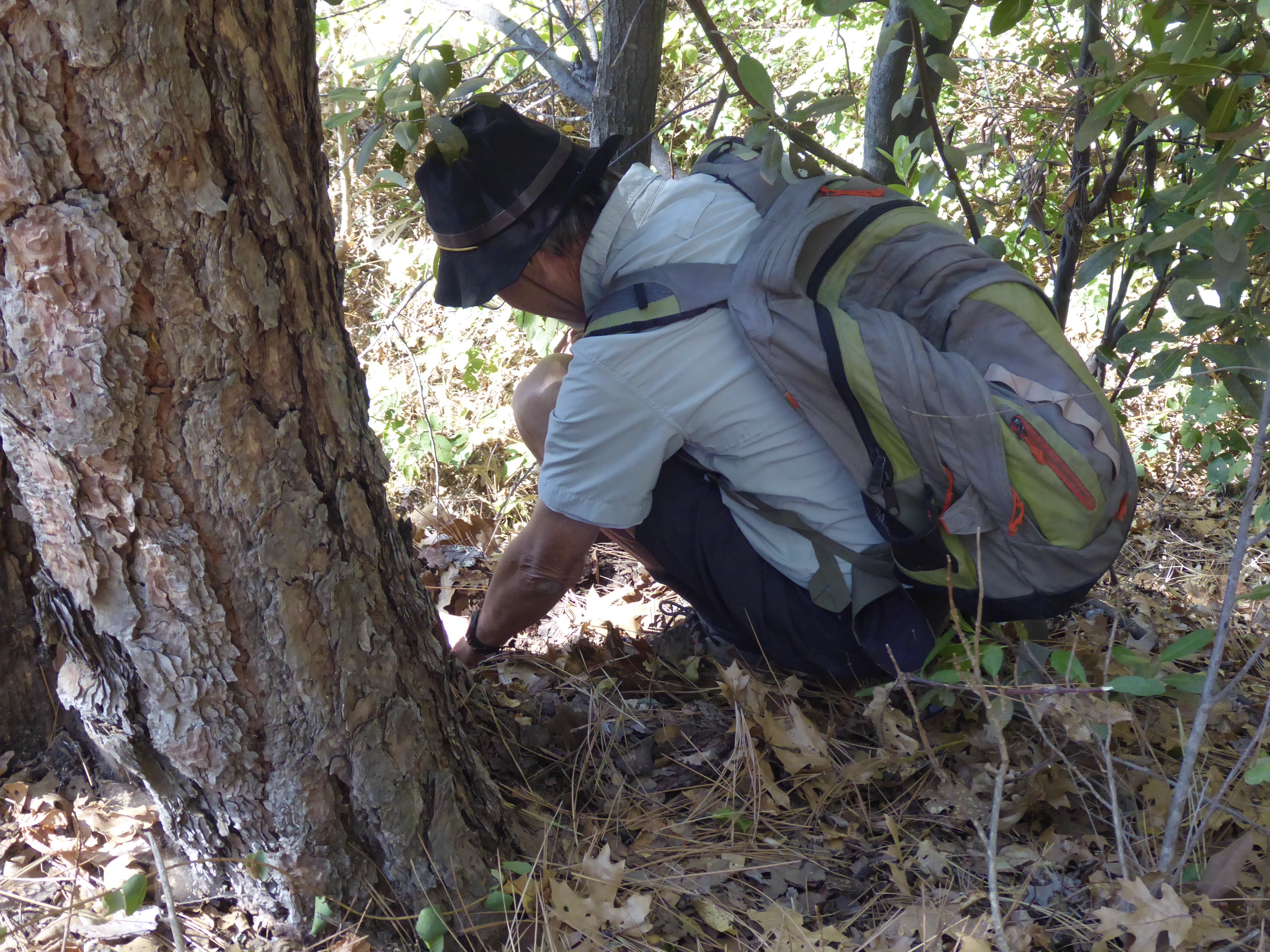 A humongous cone of gray pine (Pinus sabiniana), a California endemic. Each bract hides a tasty seed (“pine nuts”), which the squirrels work hard to obtain: 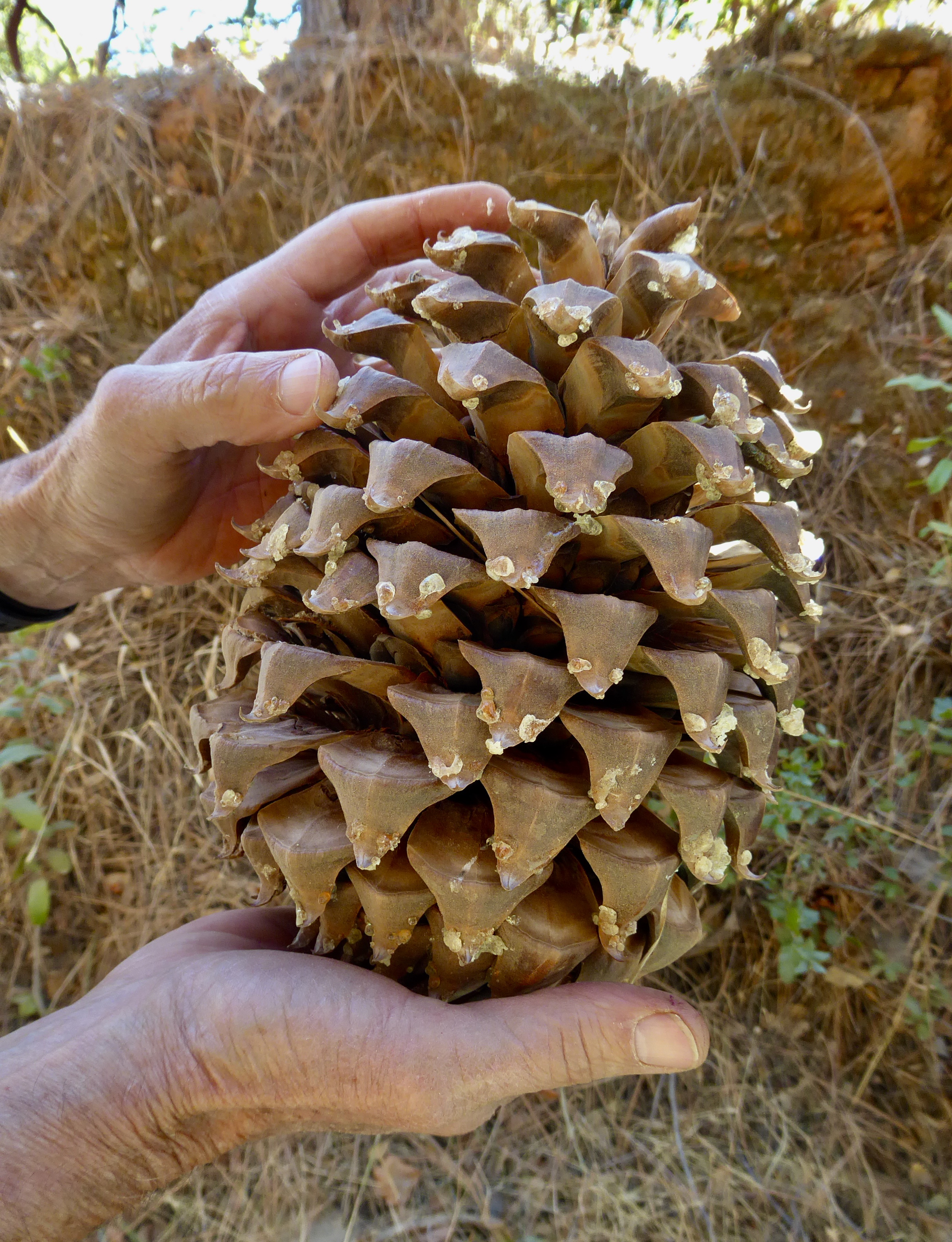 An extracted pine nut, itself covered with a hard shell. 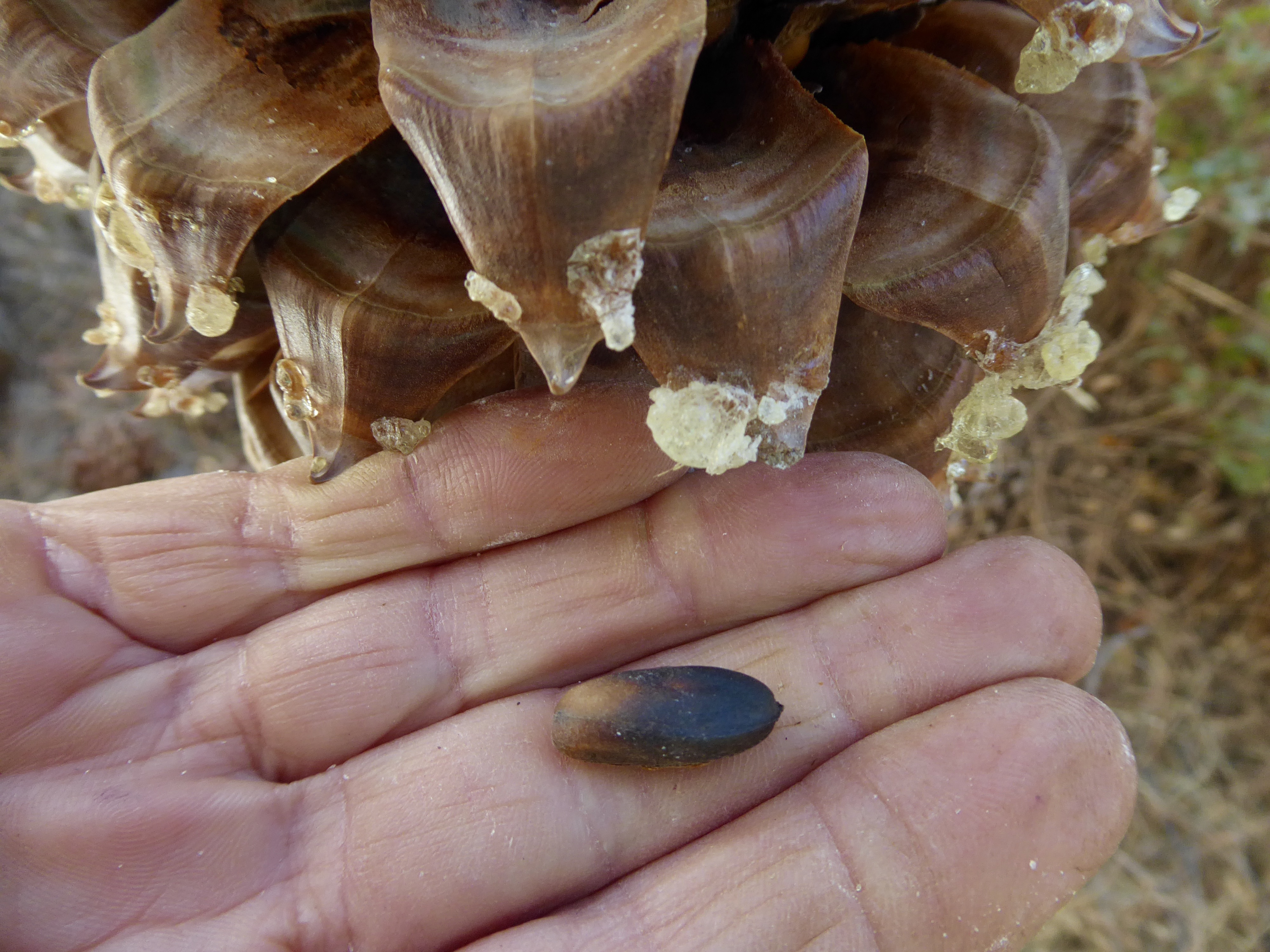 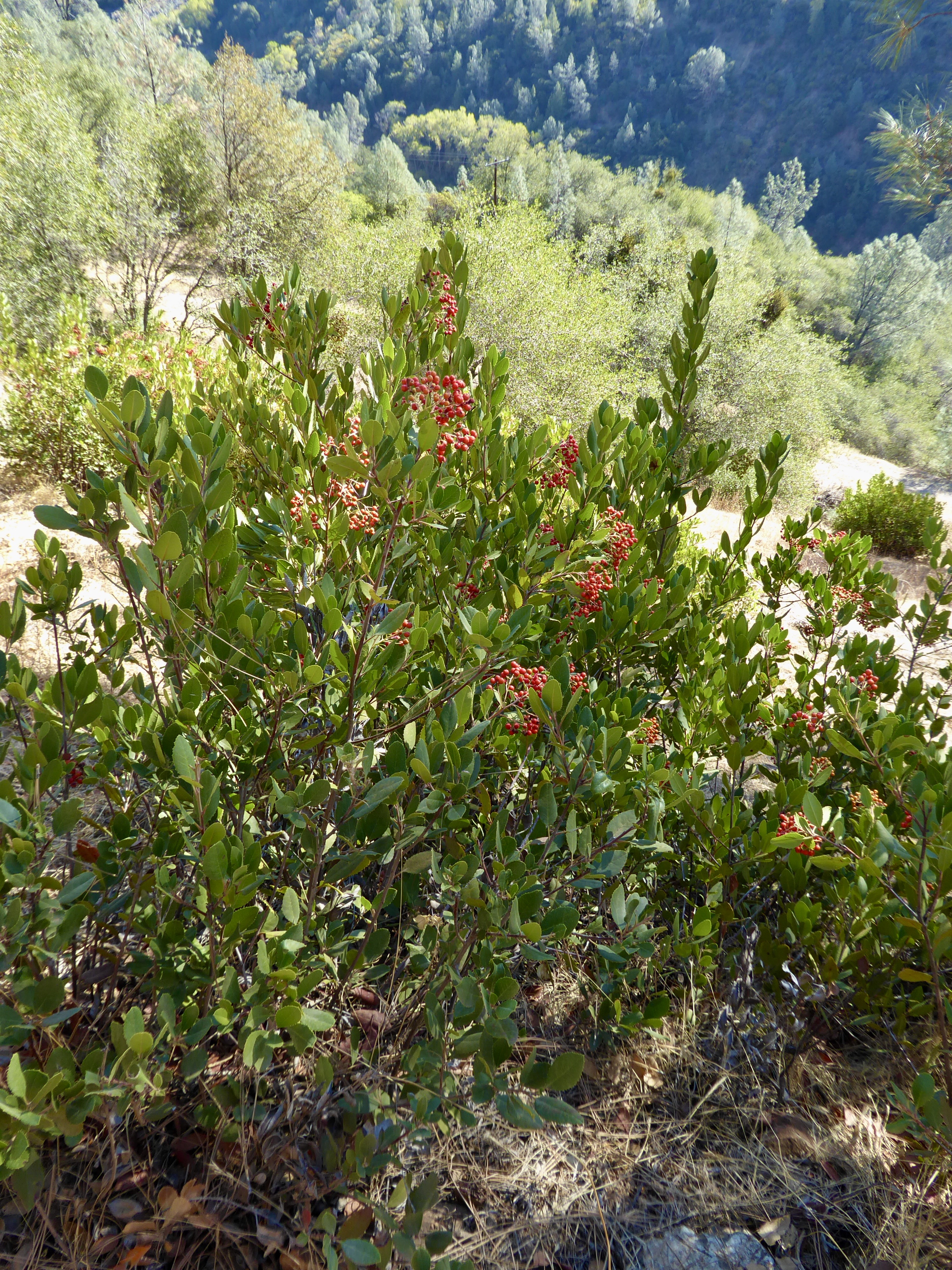 Below is one of the two great finds we made on our hike, though it’s not rare: it’s a cynipid wasp gall on the stem of an interior live oak (Quercus wislizenii). Galls are structures that are “made” by larval insects whose mothers laid eggs on either stems or leaves of plants.

In this case the mother was the live oak apple gall wasp (Callirhytis quercuspomiformis). This species of tree, like others, can be parasitized in this way by several species of wasps, but each species makes only one type of gall. In this case a yellow, golf-ball-sized gall also has prickles to protect it against predators. 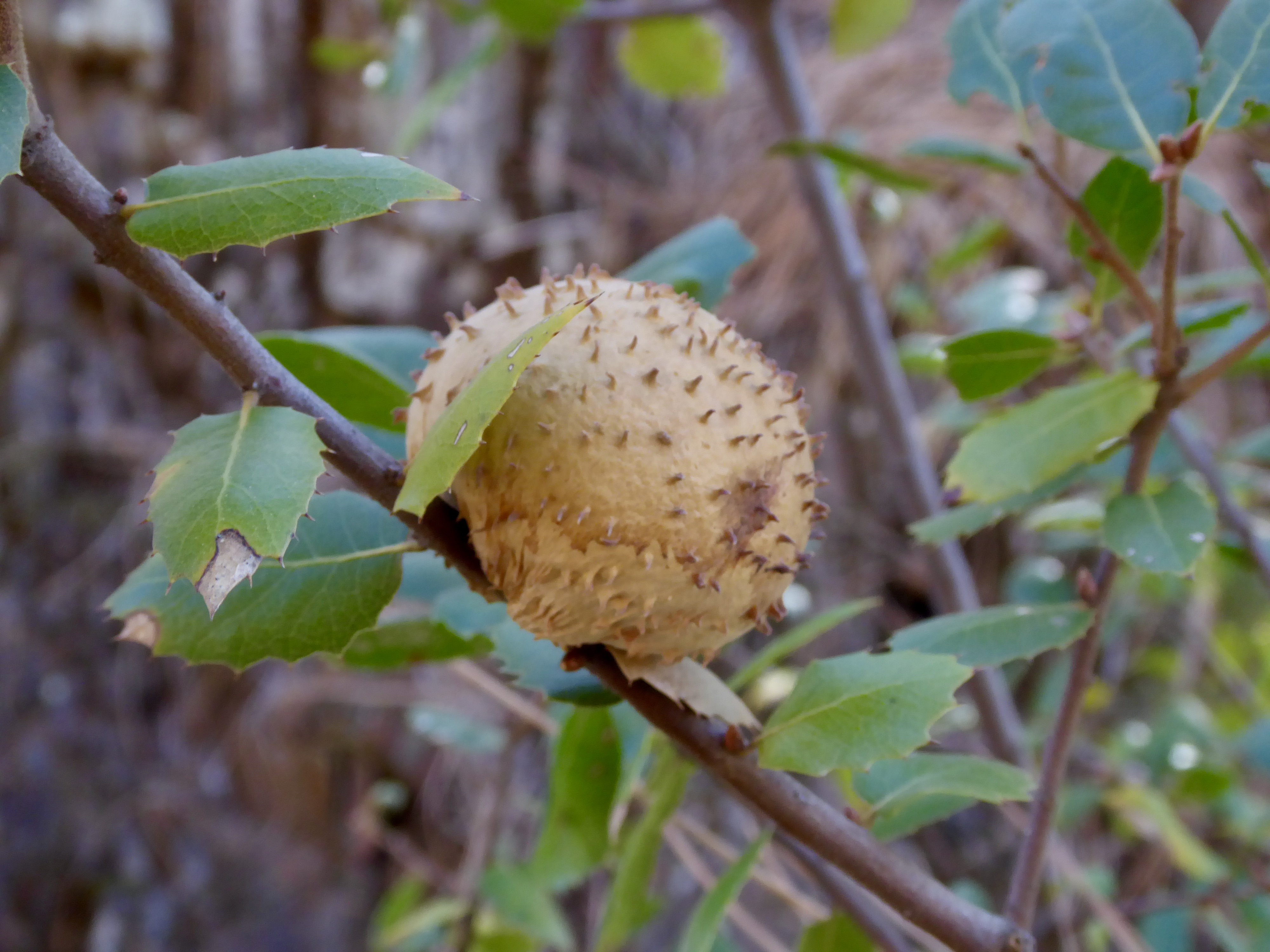 Below: clearly, two wasp eggs were laid, and the larvae somehow form this gall (as all galls are formed) by hijacking the plant’s developmental system to form a large, hard tumor that protects the larvae until they pupate and hatch. The adults then chew themselves out of the gall.

This is an amazing evolutionary phenomenon, for a gall can be regarded as an “extended phenotype” of the wasp (or whatever insect makes it), which has evolved to make the plant build a house for the larvae. Even the spines on the gall, which protect it against predators, are somehow coded in the wasp’s DNA: wasp genes that somehow make the plant’s own genes produce spikes. I’m not an expert on galls, but I think we have no idea how the insect manipulates the genome of the plant to make such a structure.

Galls are one of the marvels of natural selection, and something that Phil and I discussed in detail on our hike. It’s a great mystery, too, and would be a fascinating–though formidable–problem for scientists and Ph.D. students to work on. How do the parasite’s genes hijack the plant’s genes to mold such amazing structures? 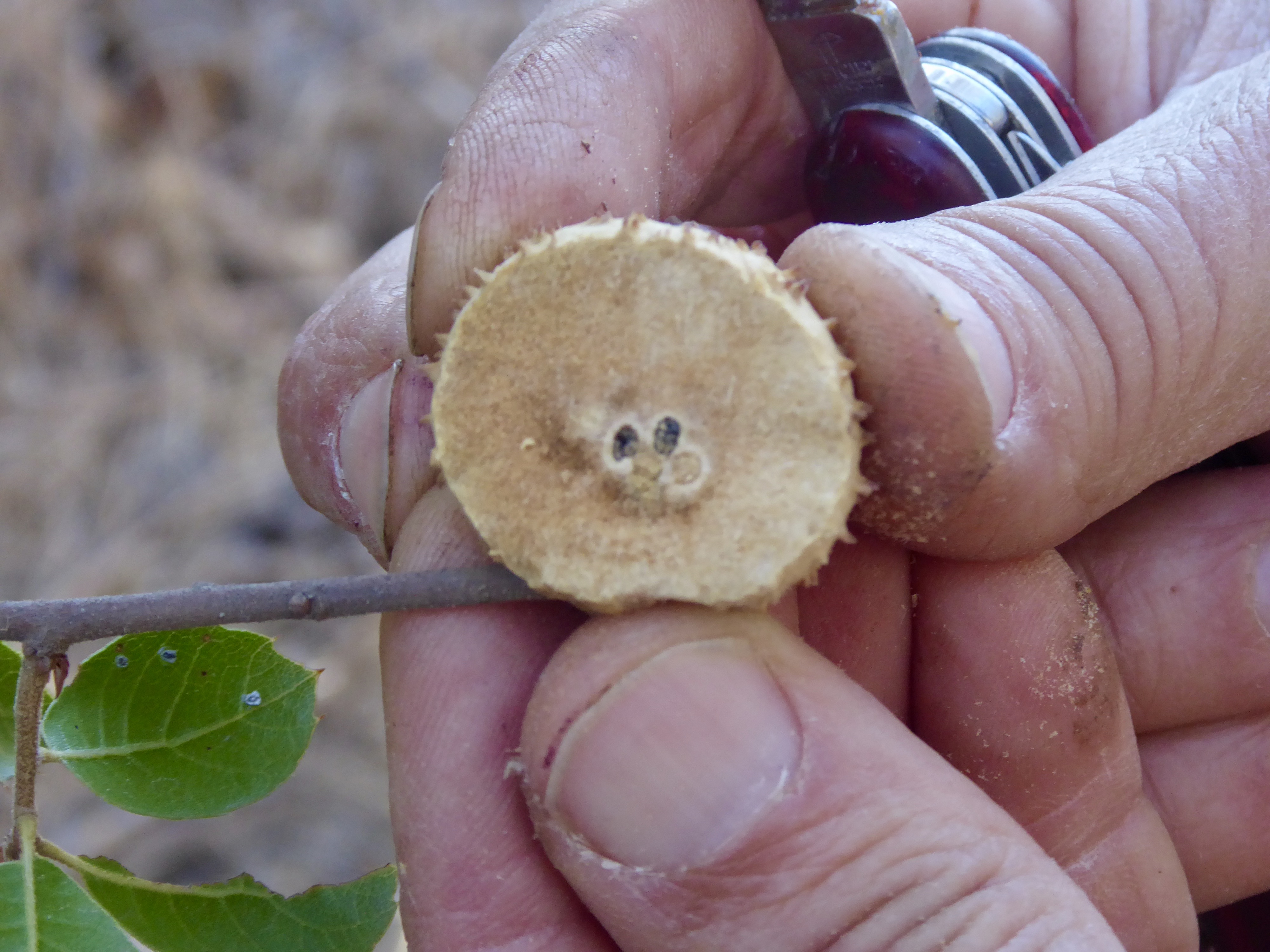 Here is a different gall (the thickened part of the stem) made by a different wasp, but on the same species of oak–the interior live oak. The shape of the gall is diagnostic of the insect species that produced it. Galls can appear on both stems and on leaves. 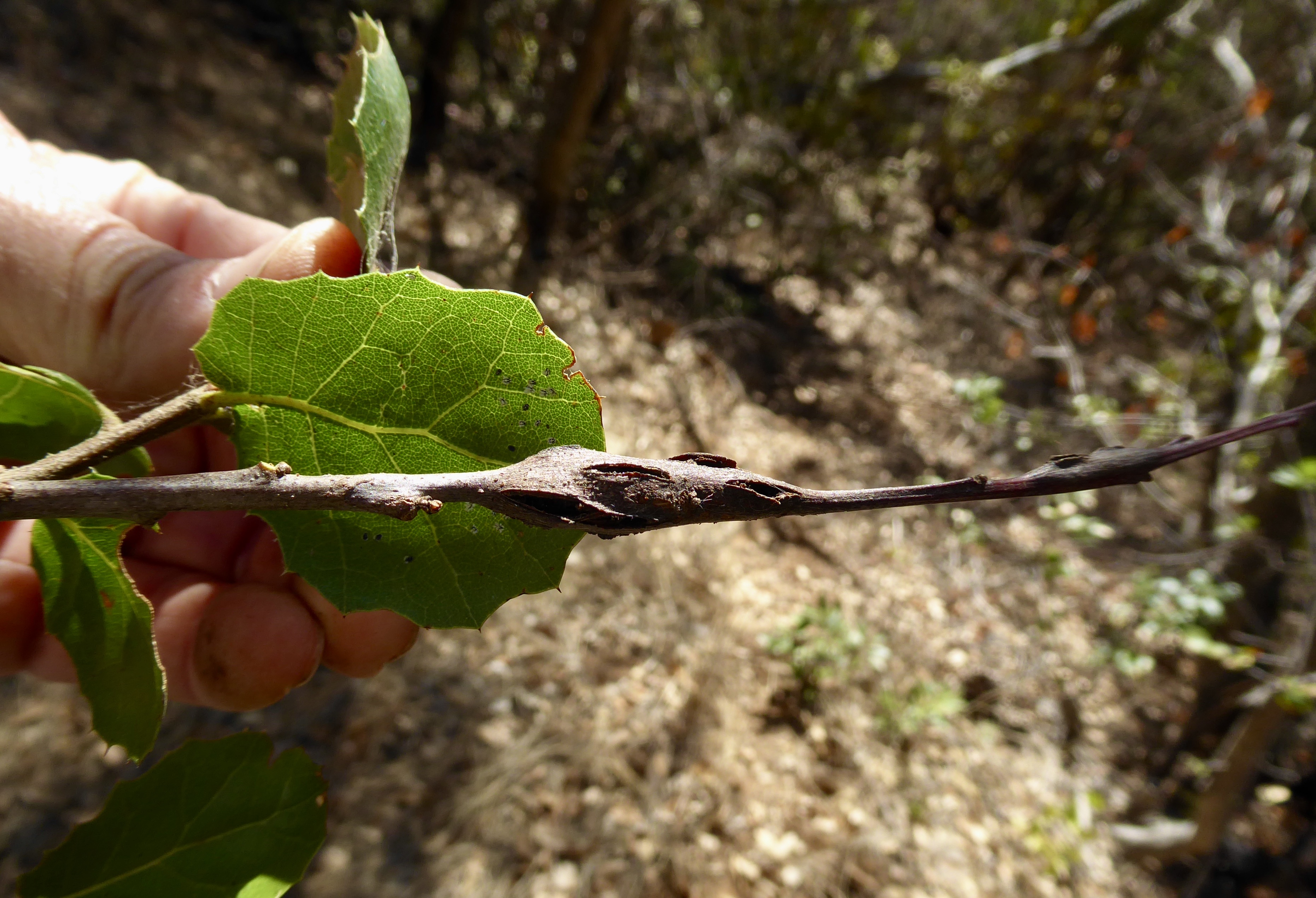 This was our second great find. I saw a woodpecker flying by, and it settled in a nearby tree. It turned out that this was an acorn woodpecker (Melanerpes formicivorus), and it had several mates on a dead oak branch. You may know of this woodpecker, as it’s famous for its “granaries”: trees or branches in which it drills holes to store acorns over the winter.  They are also cooperative breeders. Here are three on a dead oak branch; you can see the holes for storing acorns: 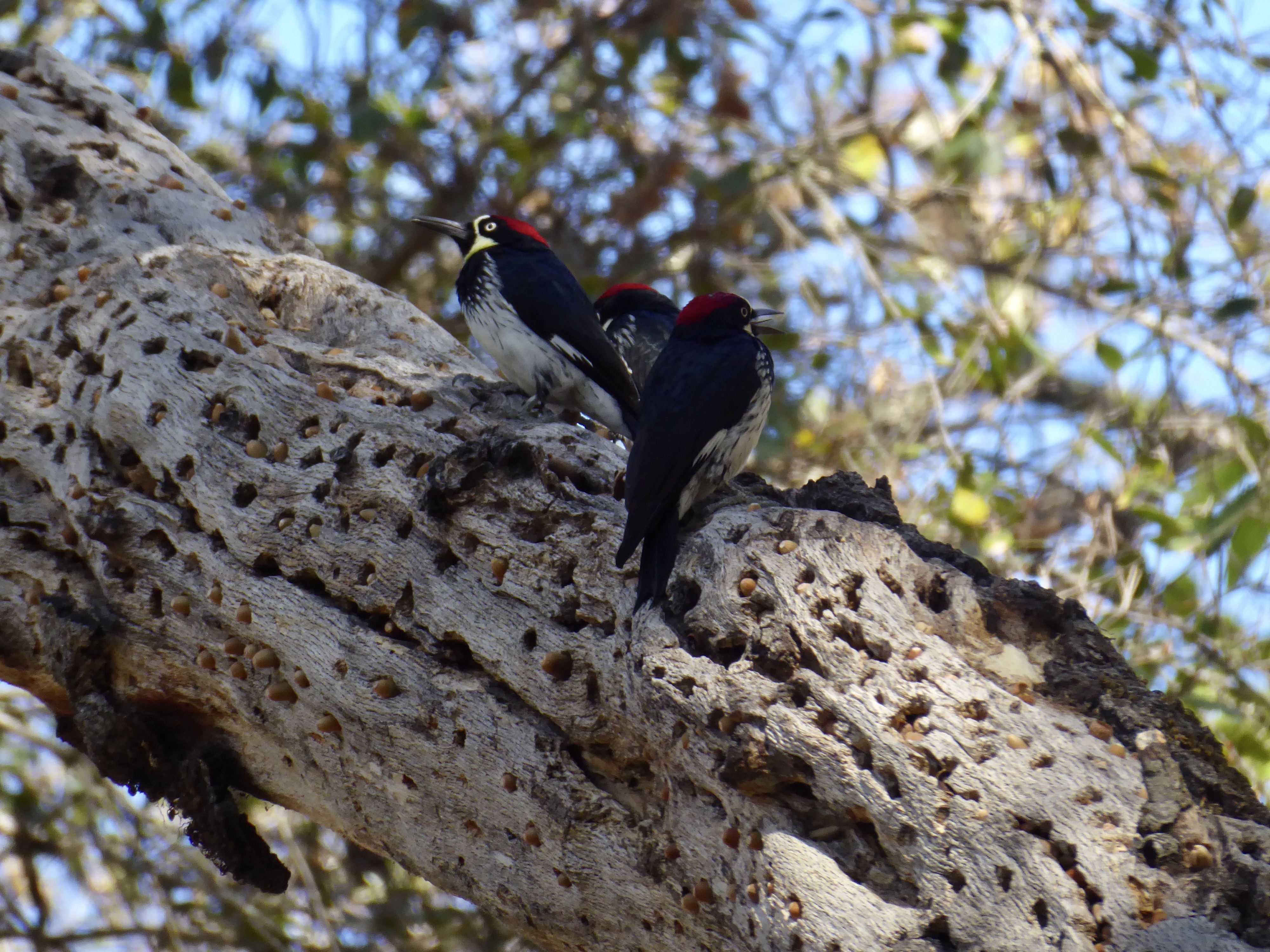 Wikipedia‘s description of this storage system:

Acorns are stored in small holes drilled especially for this purpose in “granaries” or “storage trees”–usually snags, dead branches, utility poles, or wooden buildings. Storage holes–always in dead tissue such as bark or dead limbs–are used year after year, and granaries can consist of thousands of holes, each of which may be filled by an acorn in the autumn. Access to acorn crops influences the composition of acorn woodpecker communities. In one study in New Mexico, there were about 90% of non-breeding adults per social unit in 1976, a year of a poor acorn crop. The following year, 1977, there was a significant increase in acorn production and a correlating decrease in non-breeding adults per unit.

Although acorns are an important back-up food resource, acorn woodpeckers primarily feed on insects, sap, and fruit. They can be seen sallying from tree limbs to catch insects, eating fruit and seeds, and drilling holes to drink sap.

The woodpeckers then collect acorns and find a hole that is just the right size for the acorn. As acorns dry out, they are moved to smaller holes and granary maintenance requires a significant amount of the bird’s time. The acorns are visible, and a group defends its granary against potential cache robbers like Steller’s jays and western scrub-jays.

It’s interesting that they find acorns to fit the holes, and move the acorns as they shrink.  Look at all the holes in this tree! 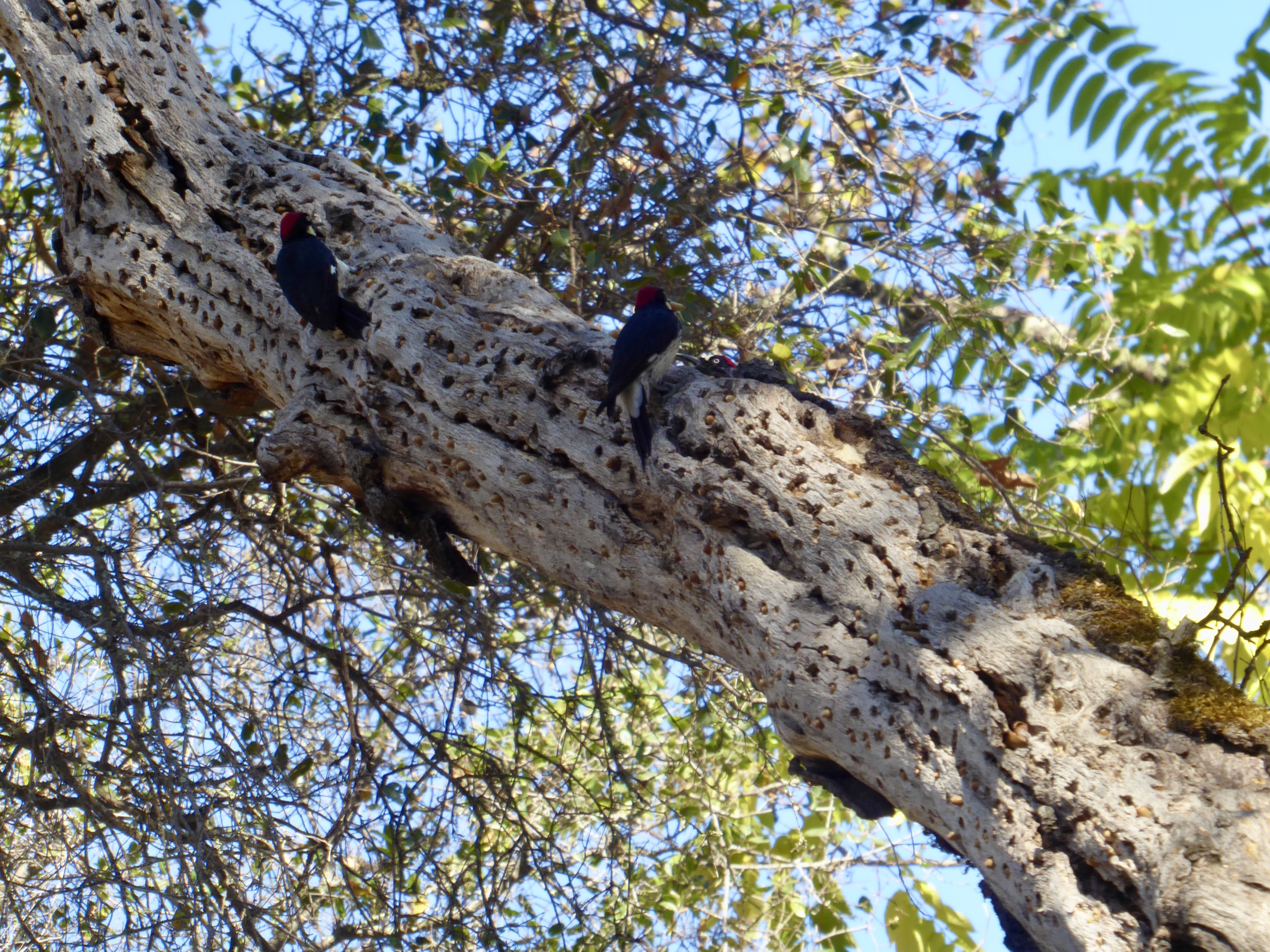 Here you see some of the holes filled with acorns: 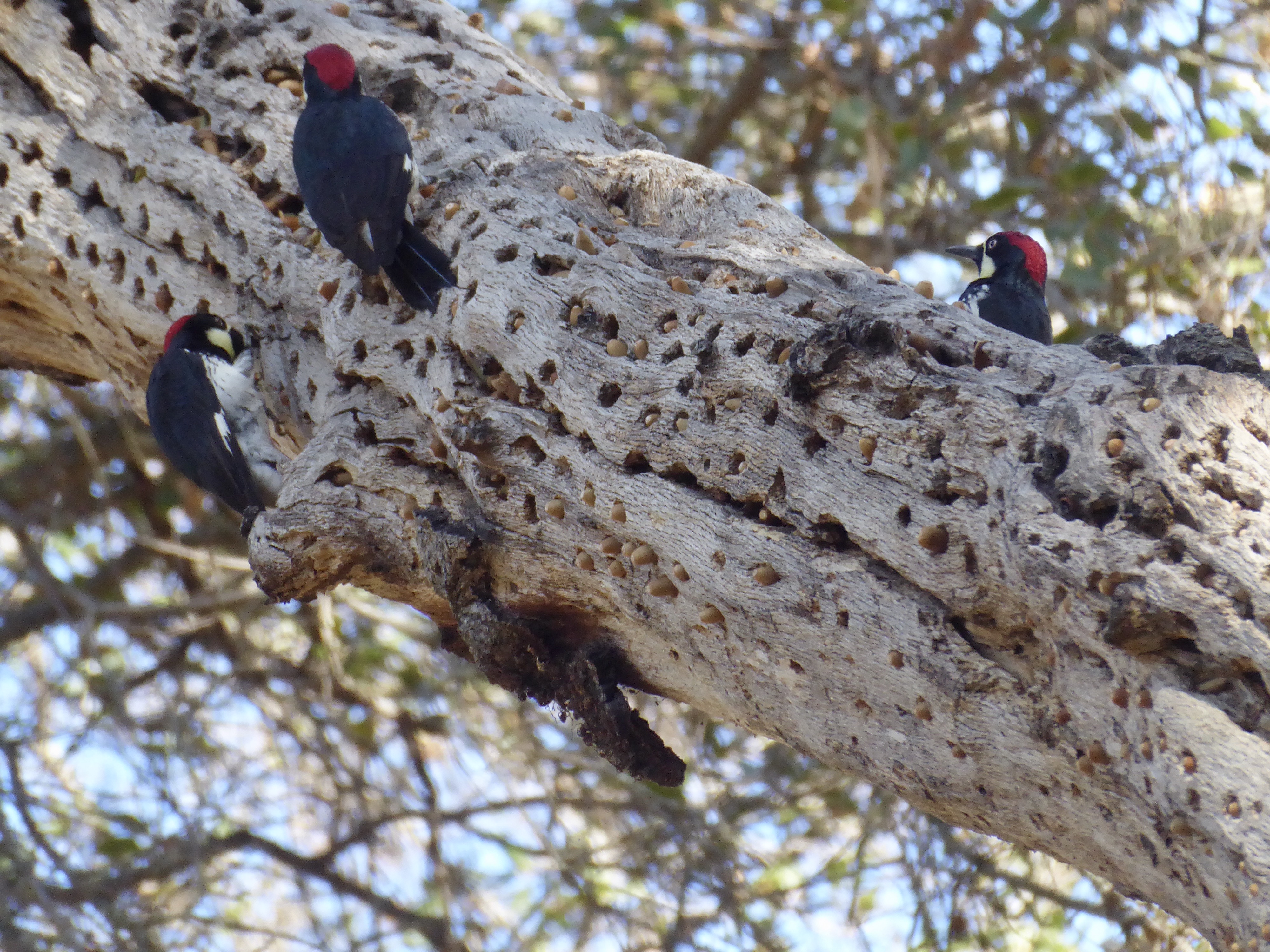 After the hike, when it had become hot, there was nothing else to do but find a brewski in the lovely small town of Auburn. I didn’t want an overhopped IPA at the local brewpub, but went for a refreshing cherry-flavored gose beer, a variant of Belgian fruit beers. 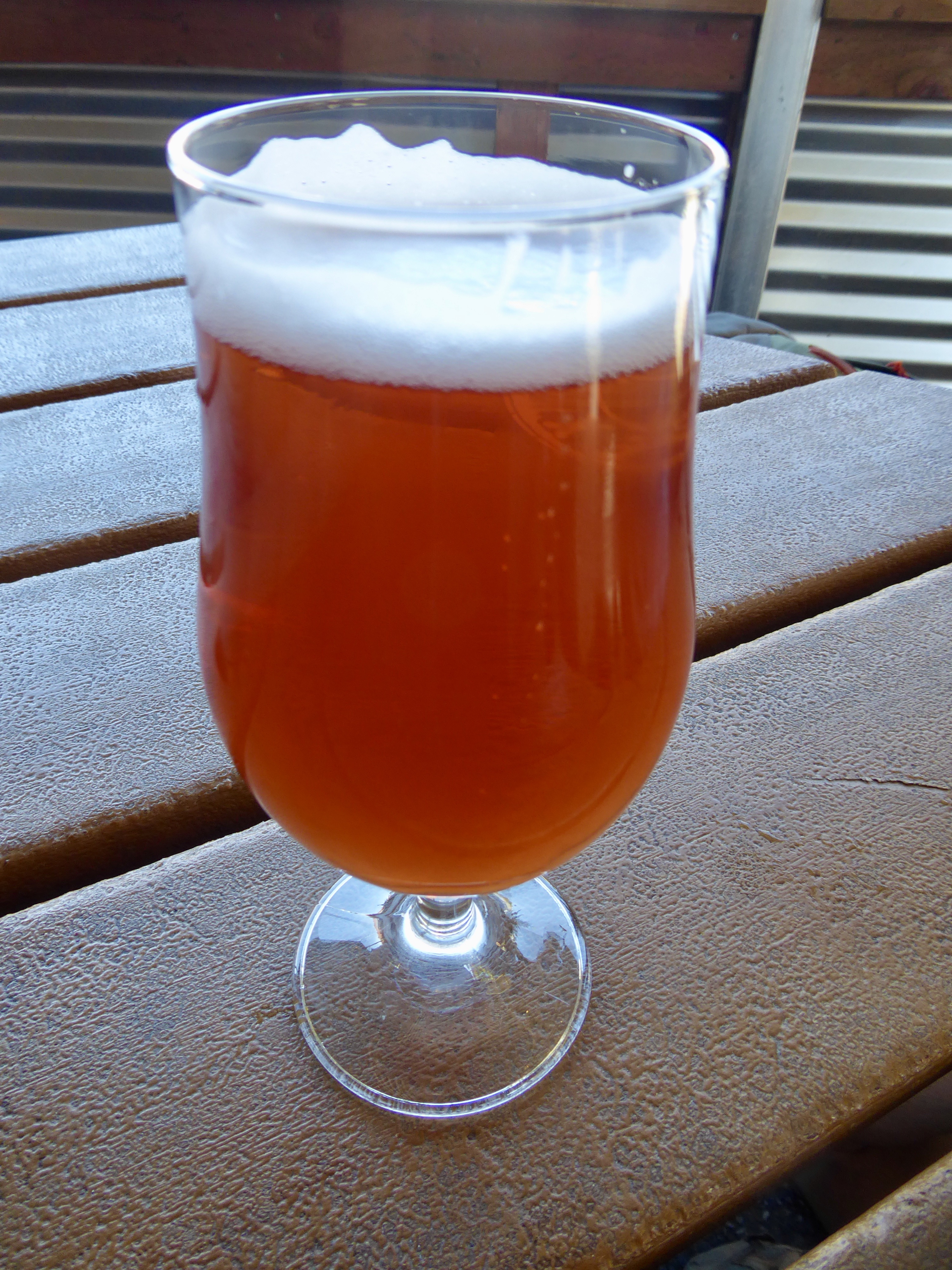 A fitting end to our hike: 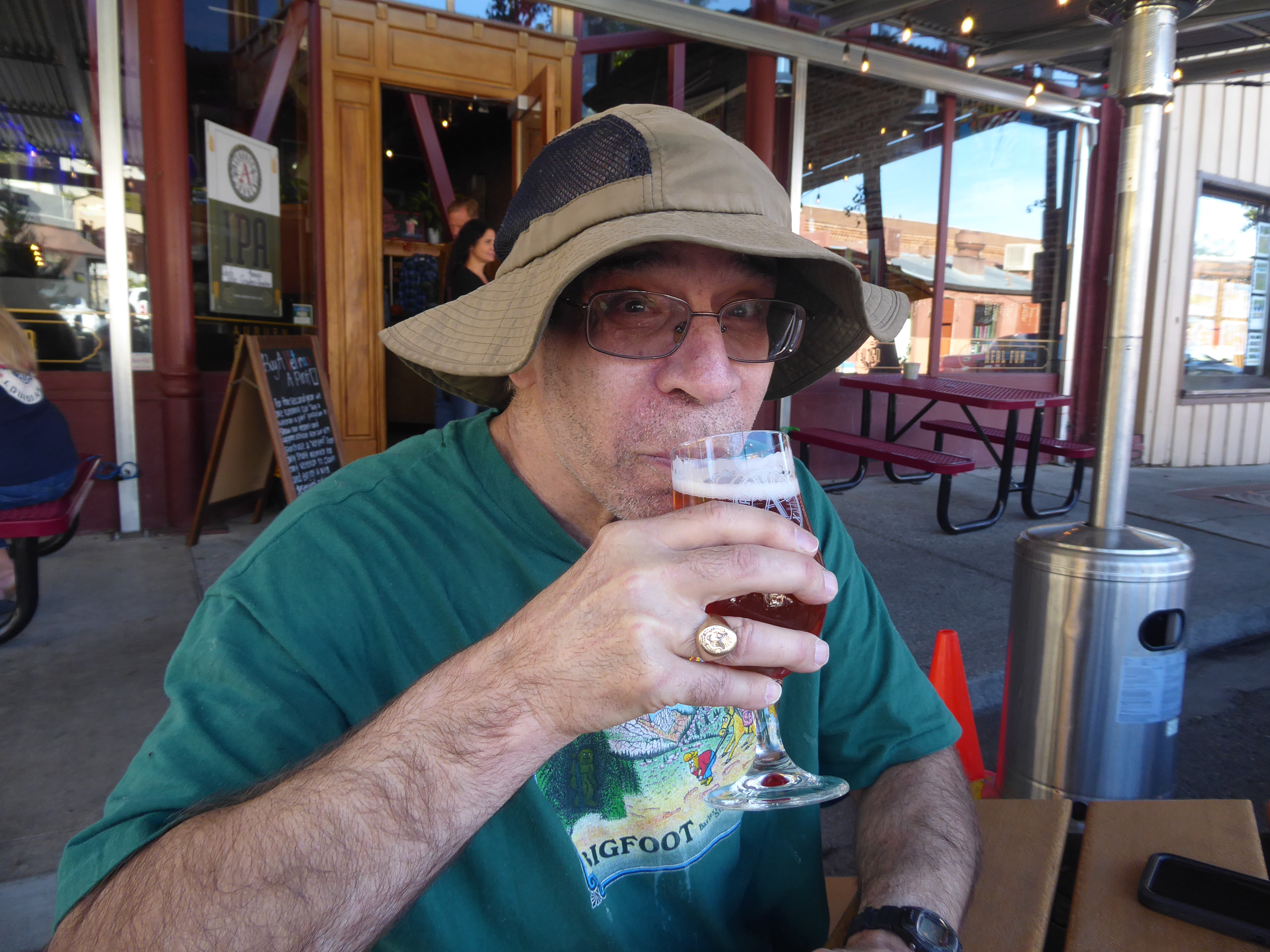 33 thoughts on “A hike in the Sierra foothills”