Good morning on Sunday, October 30, 2022, and the worst food holiday of the day: National Candy Corn Day.  This “foodstuff”, made of petroleum byproducts, wax, dyes, and sugar, is one confection that even I, with a big sweet tooth, won’t touch. Read the article below (click on screenshot) if you want to see why you should stay away from candy corn:

Readers who want to enlighten us on notable events, births, and deaths on this day can click on the October 30 Wikipedia page.

Da Nooz: The news is truncated today as I’m on vacation.

*Bad news from South Korea, and hard to understand. The NYT reports that at least 149 people were killed in a big crush, celebrating Halloween!

The crowd surge happened during one of the most raucous celebrations of the year in the nation’s capital, where as many as 100,000 people, local news media said, had clogged the narrow streets of the Itaewon nightlife district Saturday evening for Halloween festivities.

I was puzzled. Usually people in these situations are jammed in a restricted space like a tunnel or a stadium, but this was out in the street. However, as the article notes, the deaths occurred, “as thousands of people [crammed] into a narrow, hilly alley next to the Hamilton Hotel created a deadly crowd crush.”

*On Monday the Supreme Court will hear arguments in its momentous affirmative-action case, ruling on two cases in which race was used as an admissions criterion. That the Court took the case at all is a bad sign:

The court on Monday will be reviewing the admission policies at Harvard and the University of North Carolina, cases brought by longtime affirmative action opponent Edward Blum and his Students for Fair Admissions. After extensive trials, lower courts found each university complied with the Supreme Court’s precedents about considering race as only one factor in building diverse student bodies.

Given those rulings — and just six years after the Supreme Court approved a similar race-conscious admissions program at the University of Texas — analysts say it seems likely the right wing of the court accepted the new cases to redefine the law about race, not to affirm the lower courts.

. . . The authority of college administrators to use race in a limited way to build a diverse student body has barely survived previous challenges. But even a defender of such policies, Justice Sandra Day O’Connor, wrote in 2003 that racial preferences were not likely to be needed in 25 years. And a more dominant conservative majority is in place now.

I predict the vote will be 6-3. Affirmative action will certainly be found unconstitutional, but the vote may not be that lopsided:

Justice Sonia Sotomayor, the court’s first Latina, is the boldest defender of what she prefers to call “race-sensitive” admission policies; she has offered herself as the “perfect affirmative action child” — one who would not have been transported from Bronx housing projects to the Ivy League without a boost, but excelled as a top student once she got there.

Then there is Chief Justice John G. Roberts Jr., who usually is the conservative least likely to champion dramatic change in the court’s precedents. But his entire legal career is anchored by a deep skepticism of what he has called the “sordid business” of dividing Americans by race.

Add to the mix this: Five of the nine justices have yet to cast a vote on affirmative action in a Supreme Court challenge.

If there is a wild card among them, it might be conservative Justice Brett M. Kavanaugh, the member many consider key to the court’s direction.

Kavanaugh’s recorda as an advocate and judge suggest an aversion to racial classifications. But he has also displayed an aggressive pursuit of diversity among the clerks he has hired, with repeated outreach to Black student organizations at the nation’s elite law schools. His first group of law clerks at the Supreme Court was also the first to be all-female.

I’m assuming that the court will rule against race-based admissions, and I have mixed feelings about that.  After trying to determine how one could enact affirmative action on a racial basis, and not coming up with a good plan in the face of decades of attempts to do so, I am coming around to the view of affirmative action based on socioeconomic status, which will still increase ethnic diversity. What I’m curious about is how colleges and universities, with their extensive DEI apparatus, will try to circumvent the Court’s ruling, for they surely will.

*In an editorial on the same page, conservative Ross Douthat raises all the familar arguments against affirmative action: are they reparations or is diversity an innate good (the basis of the Bakke ruling?

But that emphasis on how graduates look points to what became a key problem with this approach, which is that after decades of diversity talk, everyone can see that elite student bodies are as stratified and set-apart as ever — conspicuously lacking in diversity of class, ideology and thought. And with the reparations argument set aside, the general quest for racial diversity doesn’t obviously answer the problem that Lyndon Johnson identified, since a scion of the Nigerian upper class might be its beneficiary instead of a descendant of American slaves.

All this helps explain why so much cynicism attaches to academic diversity rhetoric; it’s one reason why affirmative action is consistently politically unpopular.

But it’s taken the claim that universities have ended up discriminating against some minority applicants, against Asian Americans specifically, to push the system into crisis.

The Asian American case has split affirmative action’s pan-ethnic constituency — at a certain point all minorities don’t benefit from engineered diversity, it turns out. It has publicized the specific numbers, the stark advantages and disadvantages for different racial or ethnic groups, behind the euphemistic language of “considering” race. And by bringing up the memory of the Ivy League’s Jewish quotas, it’s emphasized academia’s habit of self-interested discrimination, its recurring fear that having too many of a certain group will ruin the brand, the optics, the image.

For years I’ve been swayed by the “optics” trope, thinking that a nearly all white and Asian elite university is just an unsavory thing, for it doesn’t “look like America.” This argument still moves me, but I find it hard to justify on rational grounds involving fairness to everyone. Socioeconimic affirmative action is at least easier to justify, and still increases diversity.

*Microbiologist Elizabeth Bik has a fascinating but depressing piece in the NYT called “Science has a nasty Photoshopping problem.” If you follow science news, you’ll know that several researchers have been brought down by photoshopping images or using the same image over and over again as if it were documenting distinct experiments. Several people have now devoted themselves to sussing out this kind of fraud, and the results are depressing.

After finding one such case, Bik became a bloodhound:

But were those duplicated images just an isolated case? With little clue about how big this would get, I began searching for suspicious figures in biomedical journals.

. . .By day I went to my job in a lab at Stanford University, but I was soon spending every evening and most weekends looking for suspicious images. In 2016, I published an analysis of 20,621 peer-reviewed papers, discovering problematic images in no fewer than one in 25. Half of these appeared to have been manipulated deliberately — rotated, flipped, stretched or otherwise photoshopped. With a sense of unease about how much bad science might be in journals, I quit my full-time job in 2019 so that I could devote myself to finding and reporting more cases of scientific fraud.

Using my pattern-matching eyes and lots of caffeine, I have analyzed more than 100,000 papers since 2014 and found apparent image duplication in 4,800 and similar evidence of error, cheating or other ethical problems in an additional 1,700. I’ve reported 2,500 of these to their journals’ editors and — after learning the hard way that journals often do not respond to these cases — posted many of those papers along with 3,500 more to PubPeer, a website where scientific literature is discussed in public.

The article has animation so you can see how images were manipulated. The rate of fraud she found is 2.5%, surely an underestimate of true fraud. I can’t claim that this problem is limited to microbiology or molecular biology, either, since many experiments in organismal biology are one-offs and will never be repeated; nor do they contain images that can be manipulated.

*Finally, even more depressing is this aspect of America’s gun problem discussed by the AP.

With people running away, officers moved in, service weapons drawn. They put the 26-year-old in handcuffs and confiscated his gun. Tussey was later charged with terroristic threatening, wanton endangerment and disorderly conduct, prosecutors said, and could face up to 20 years in prison.

His lawyer says he “was engaged in perfectly legal behavior” in the incident last year, raising a relatively new legal argument in the United States that now stands before the courts to settle.

That’s because Kentucky made it legal in 2019 to carry a gun in public without a permit, joining what is now a majority of states with similar laws.

I had no idea you could carry a gun, much less a semiautomatic rifle, without a permit! I knew there were states that allowed “open carry”: carrying guns out in public rather than concealed on your person, but without a permit?  Oy vey! Here’s the problem:

Many celebrate the end of the bureaucracy erected around what they consider every American’s constitutional right to carry any firearm they want. But permitless carry laws have created a dilemma for officers working the streets: They now have to decide, sometimes in seconds, if someone with the right to carry a gun is a danger.

. . .“It’s no secret why so many law enforcement leaders are speaking out against permitless carry laws,” said John Feinblatt, president of Everytown for Gun Safety. “Allowing anyone to carry a gun anywhere makes the job of a police officer harder and more dangerous.”

My fervent wishes for very strict gun regulations in America, along the lines of Scotland or England, are doomed: the laws just get more and more lax. Ceiling Cat help us every one.

Meanwhile in Dobrzyn, Hili is beefing about ancient photographs:

Hili: Yesterday I was looking at old pictures.
A: And?
Hili: They were not sharp.
A: Even today we have such pictures. 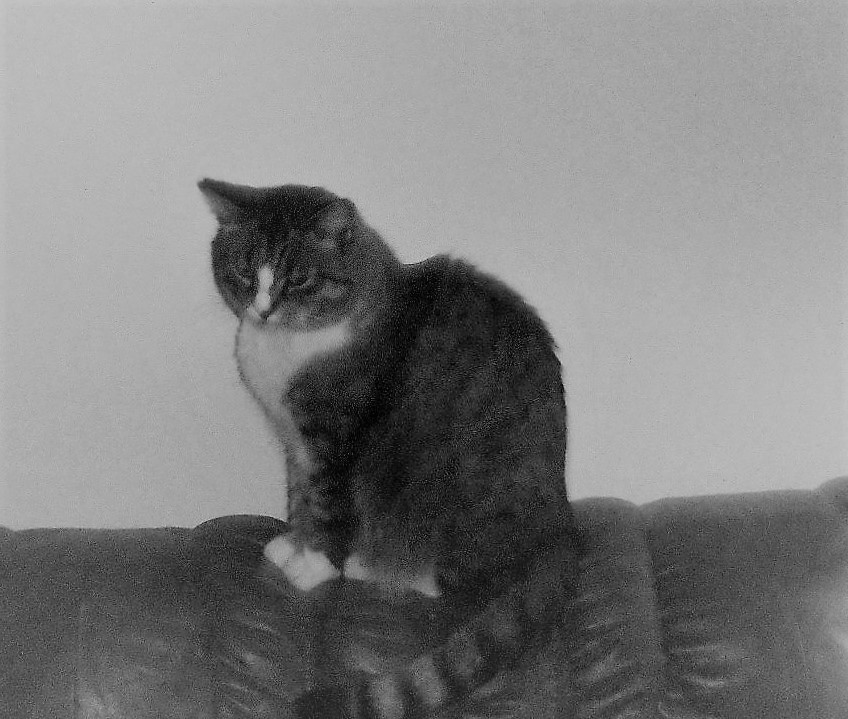 Photos of baby Kulka in the garden taken by Paulina. Caption: “A young, hard working woman rested actively during the sunny afternoon in the garden with a camera, a cat and a husband in the role of an assistant.” 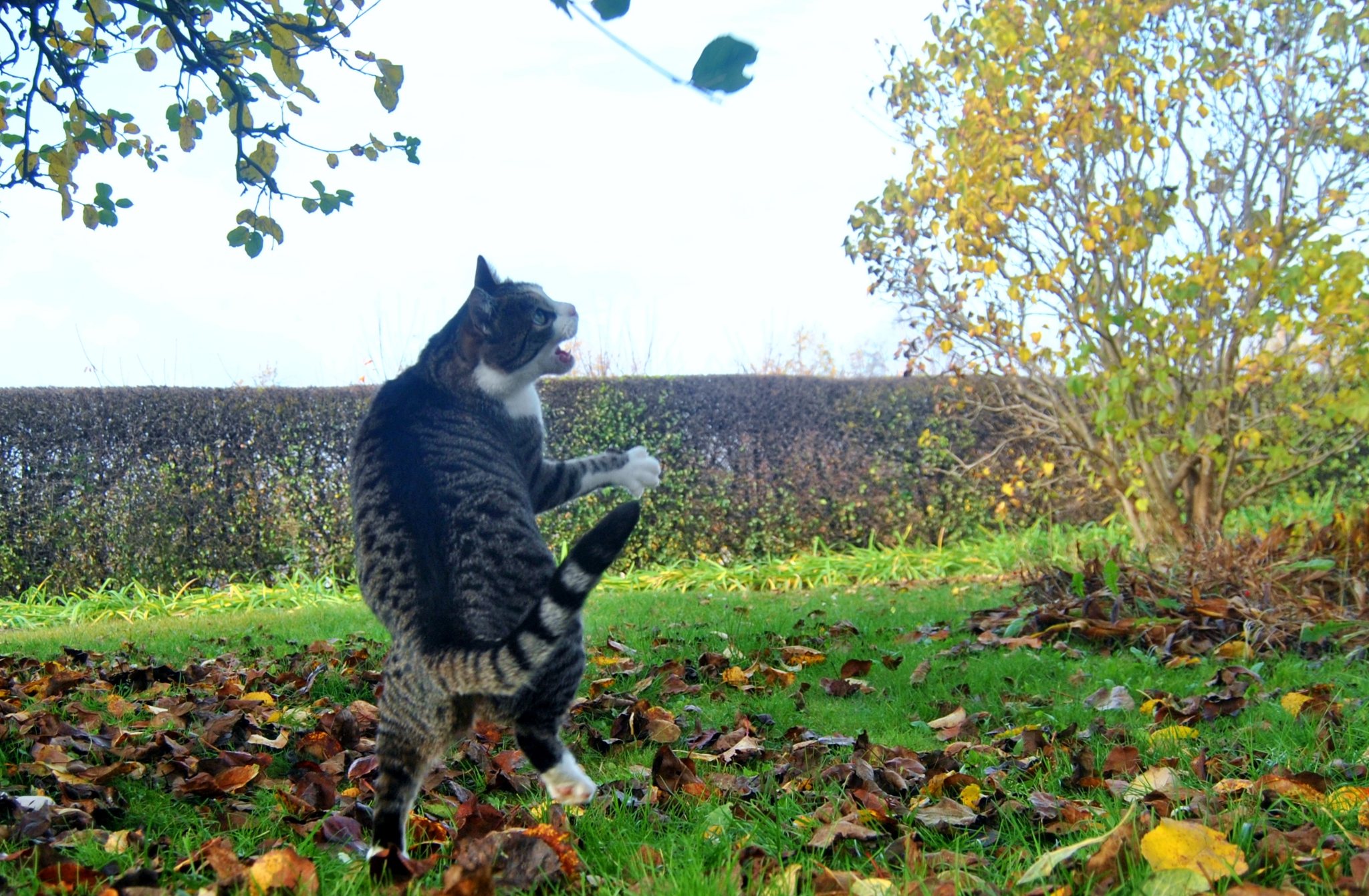 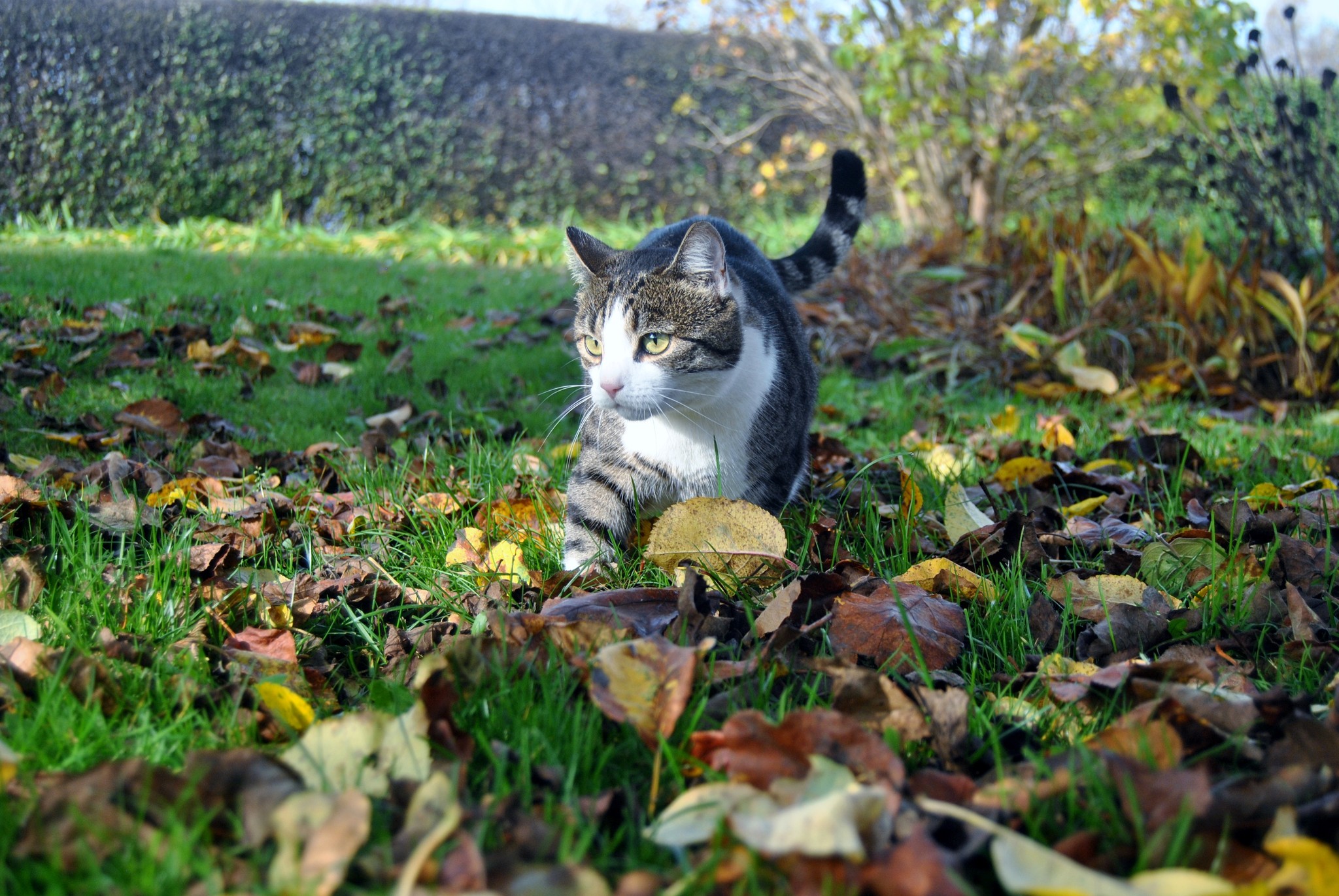 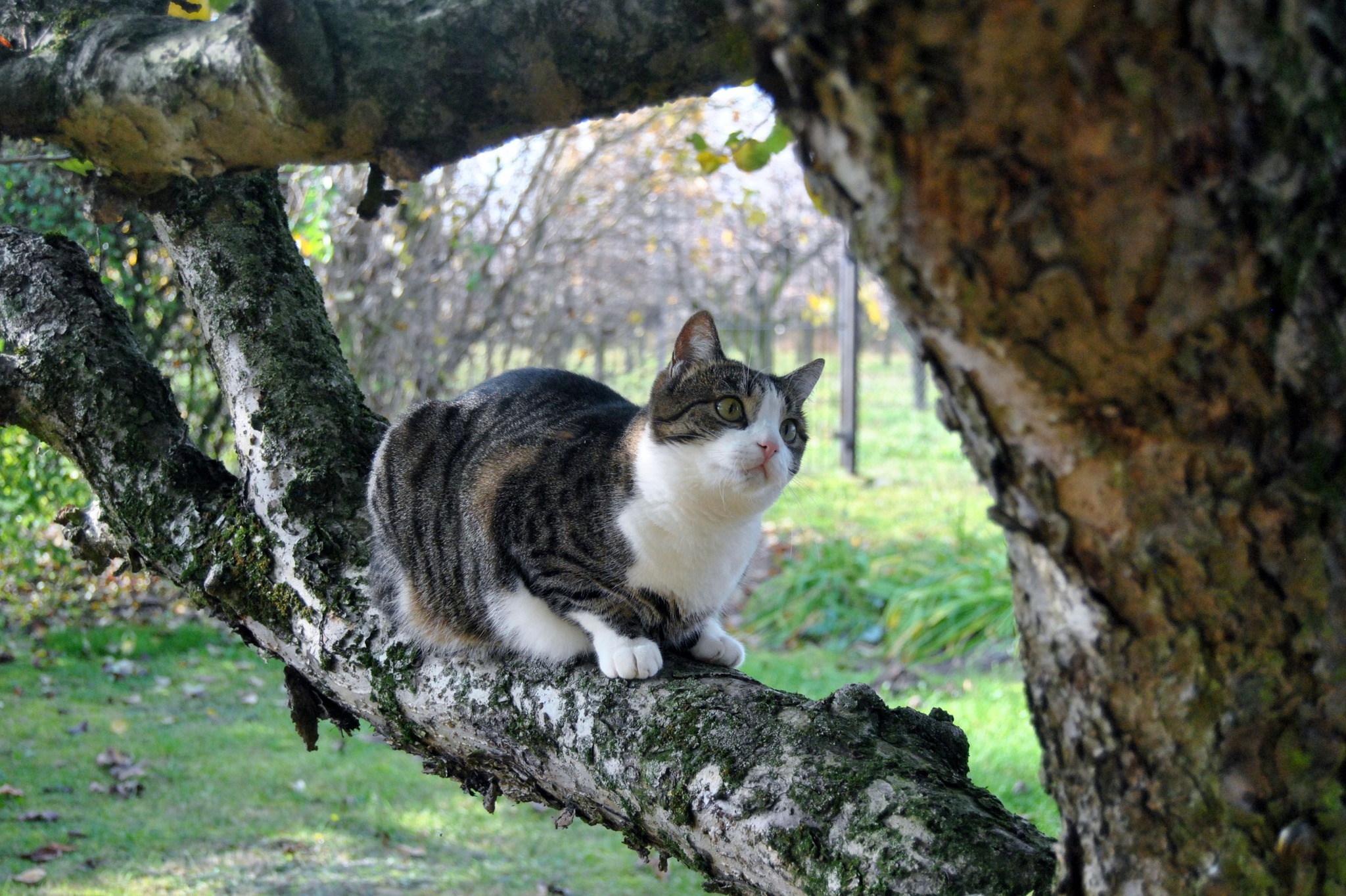 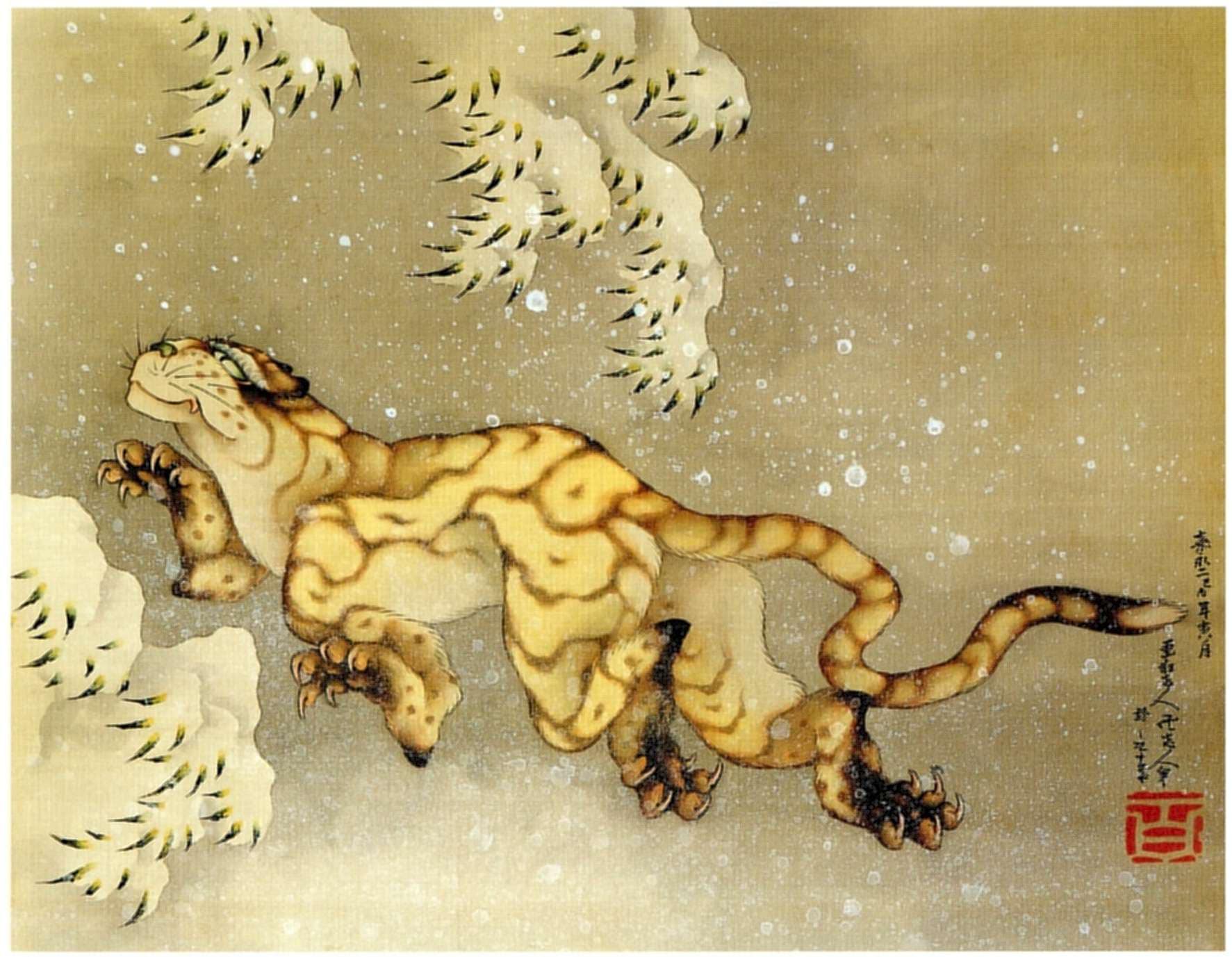 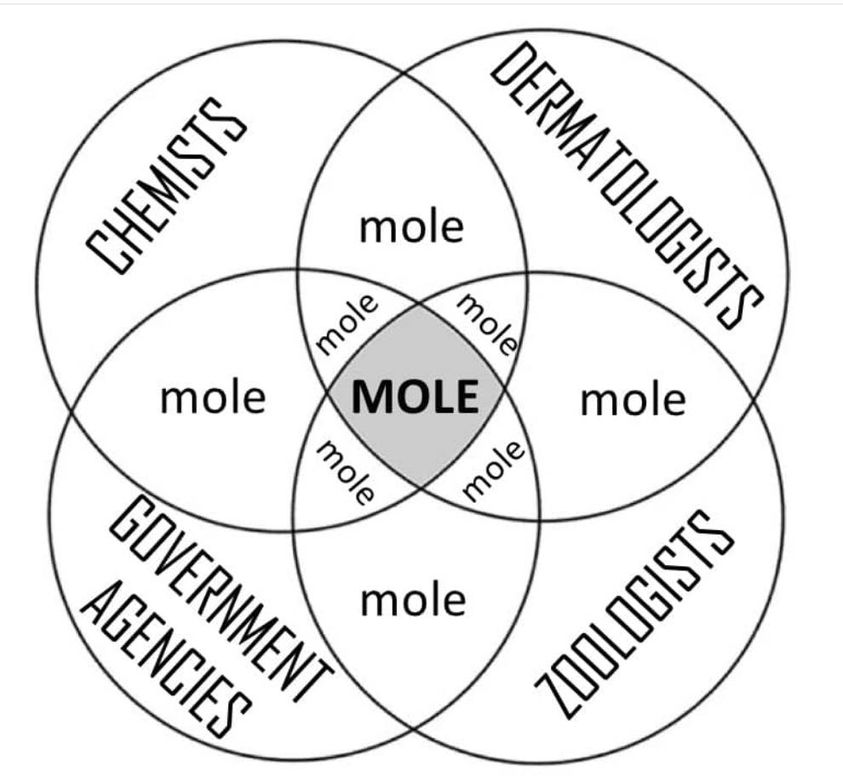 From the Catspotting Society FB page: 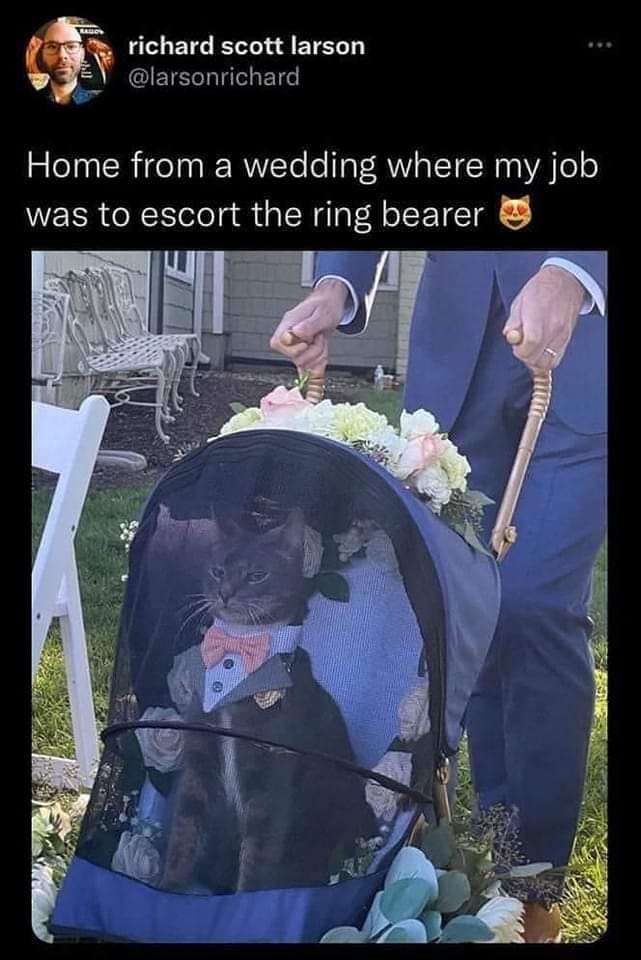 Two from God; one about Twitter (and other stuff):

. . and one (the second one below) He retweeted about Iran (sound up):

2/#FereshtehAhmadi, 32, was shot and killed by the IR security forces in Mahabad on Thursday.
Her daughter's tears are the fuel to the fire that has been burning in the hearts of millions of Iranians in the past 43 years and 43 days, a fire ignited by the brutality of IR regime. pic.twitter.com/AkRf4hUWru

From Malcolm, a clumsy cat:

From Thomas: the Episcopalians decide that they can get recruits by promoting a mix-and-match theology using, yes, apps:

The Episcopalian strategy to halt its demographic decline: give Gen Z apps that serve up eclectic "theologies" (feminist, queer, etc.) to give them an "authentic, do-it-yourself spirituality." pic.twitter.com/bWl7XjtZ53

From Simon, who says, “Who knew that elephants were tidy freaks?”

Awesome footage of an elephant throwing away litter into a trash can at a safari outpost pic.twitter.com/klGwhYQEng

In September 1943 she was deported to #Auschwitz. She did not survive. pic.twitter.com/qaC128DqyT

Tweets from Matthew. You figure the first one out; my brain is too fogged to function:

Sound up on this awesome movie preview. Top Gun 3 with Tom Cruise and Owlkitty!