Today’s contribution comes from Tony Eales in Queensland; a mixture of invertebrates, molluscs, and even a fungus. Plenty of cool stuff here!. Tony’s notes and IDs are indented, and you can enlarge the photos by clicking on them:

I was sent to Cairns in tropical North Queensland Australia for work and of course took the opportunity to get out and photograph the amazing invertebrate wildlife.

One of the common orb-weaving spiders is also one of the most spectacular. Gasteracantha fornicata, the Northern Jewel Spider. This was the first species of spider to be scientifically described in Australia in 1775. It was collected by Joseph Banks on Cook’s voyage along eastern Australia in 1770 and later described by Johan Christian Fabricius, student of Linnaeus. As adults they are banded dark black-red with white, but this one is a juvenile and is red and yellow. 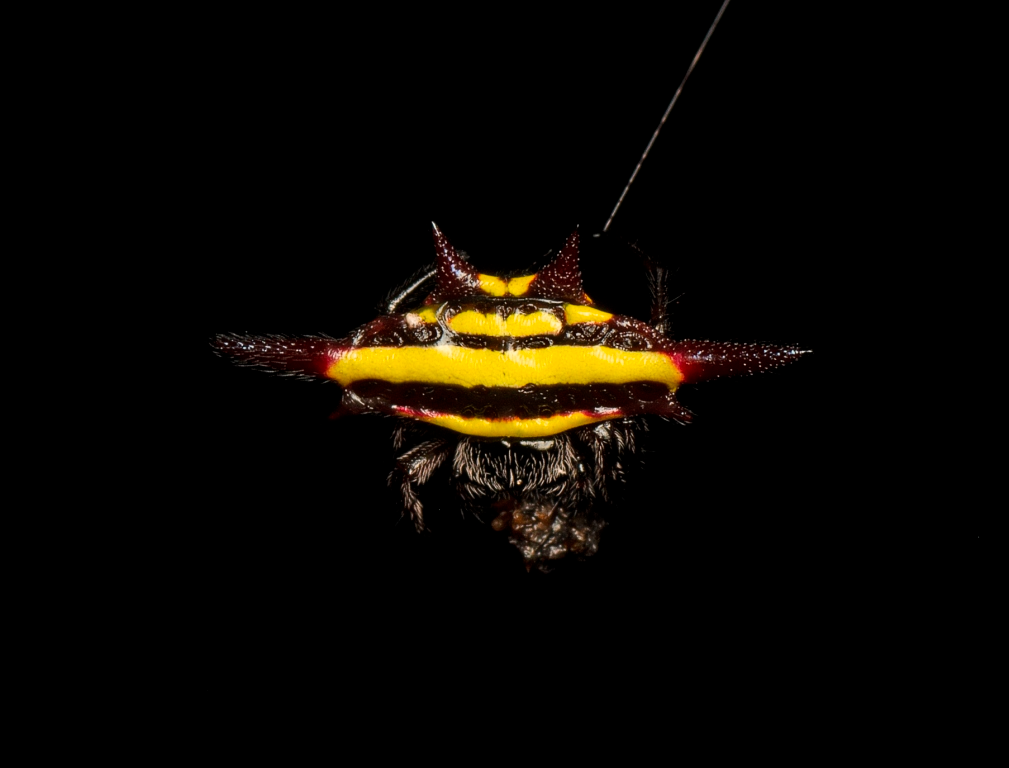 Another common invertebrate on the leaves of shrubs in the rainforests around Cairns is the snail Leptopoma perlucidum. I think they have a sweet and somewhat comical face. 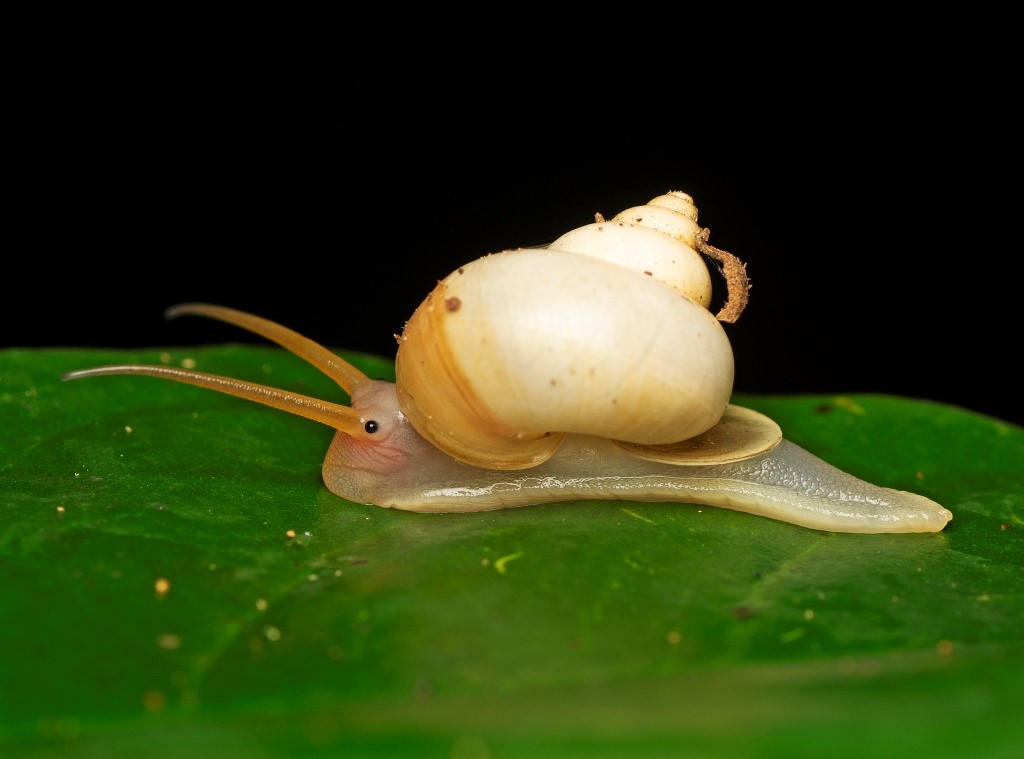 On a raised boardwalk in Speewah Conservation Park I was surprised to find this decent sized Lychas sp. Bark Scorpion. I have only ever found them under flaking bark before. 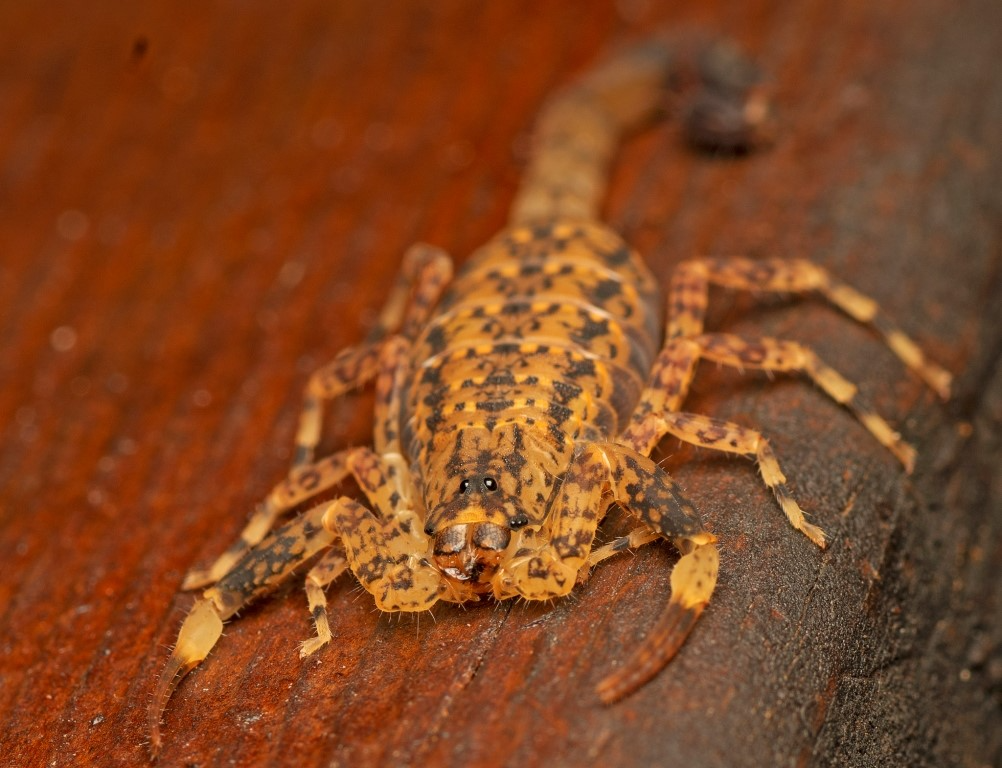 One of my favourite finds was this absolute unit of an ant. It is part of the giant Bull-dog Ant complex and this species is usually given as Myrmecia mjobergi. I’m familiar with the relatives that live in the rainforests further south, but I have never seen one with such long mandibles. As with all these nocturnal giants, I found it to be rather placid and timid and a pleasure to photograph. 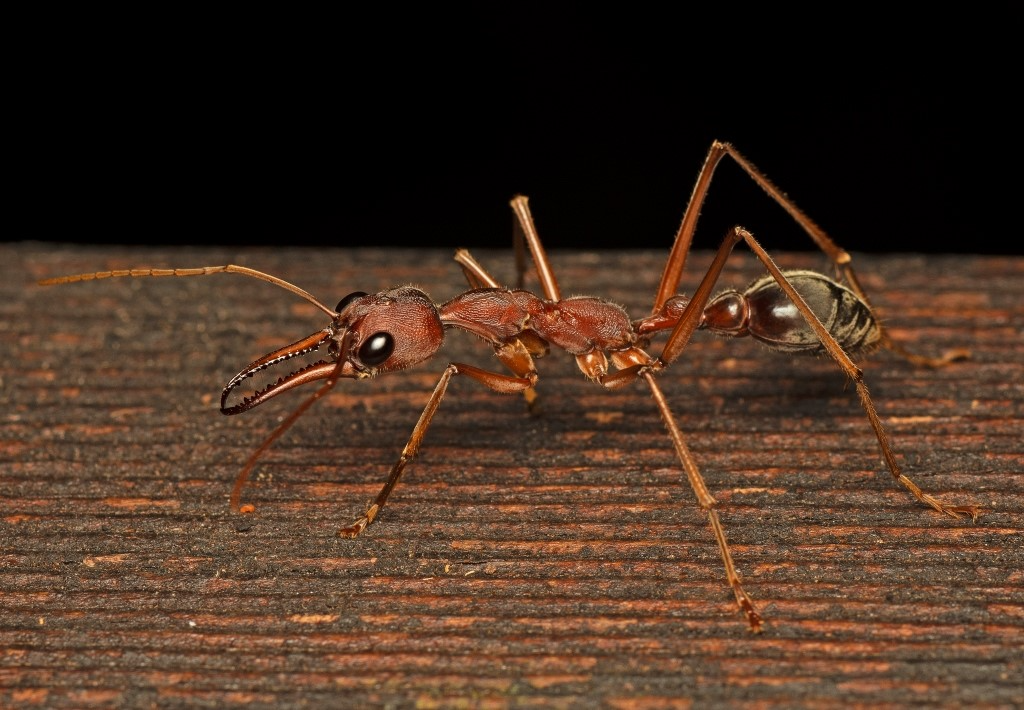 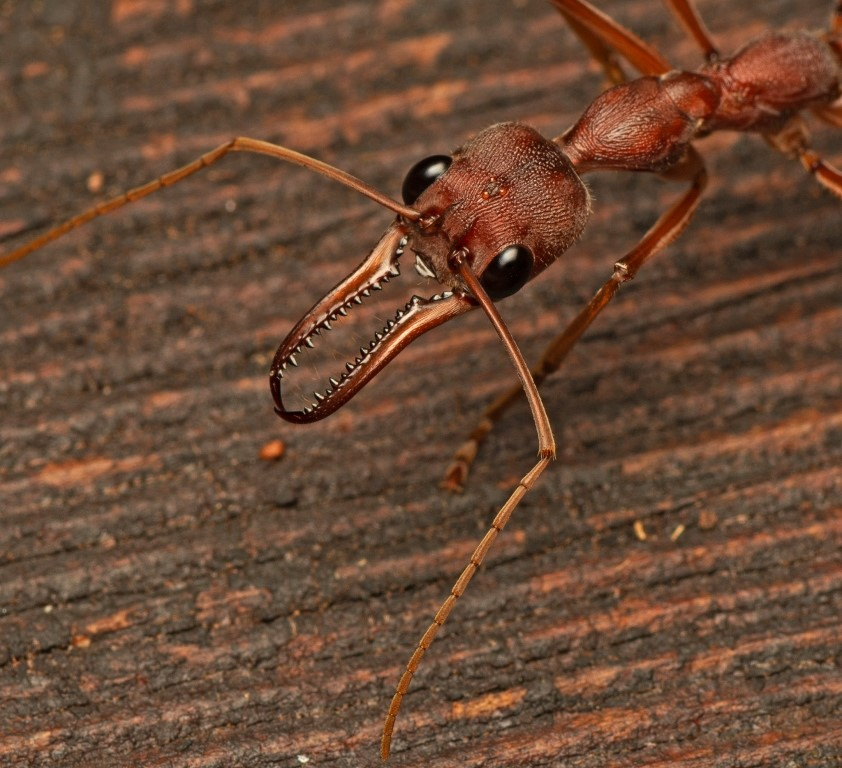 But my favourite ant was the trap-jaw ants Odontomachus sp. I’ve found so many false trap-jaws and lookalikes before, and it was great to see the real McCoy. And I was very happy to get this shot of two nest mates greeting one another on a leaf. 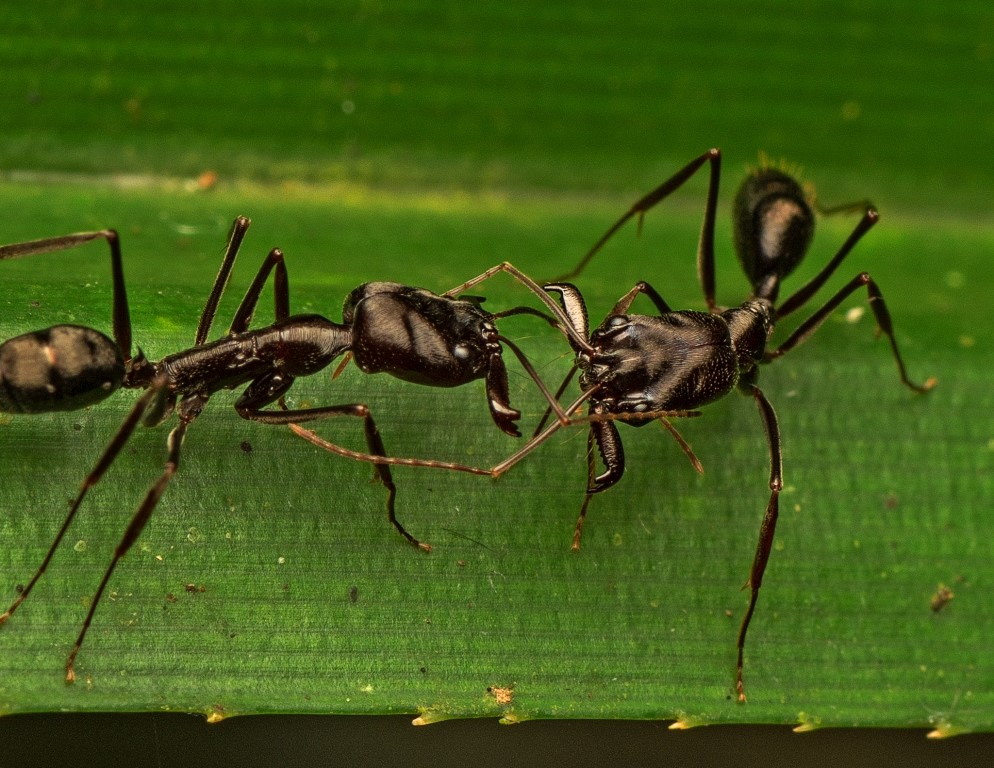 Speaking of ants, Green Weaver Ants (Oecophylla smaragdina) were everywhere, hardly a tree didn’t have a nest. As always, I hunted for the Green Ant Mimicking Crab Spider, Amyciaea sp. Apparently, they are not uncommon although hard to distinguish from the ants—but as yet I haven’t seen one.

On the other hand, I did find the much rarer, green ant mimicking theridiid, Propostira sp. These are only officially described from India but various observations at places like iNaturalist show they are more widespread and probably occur in low numbers wherever there are Oecophylla. 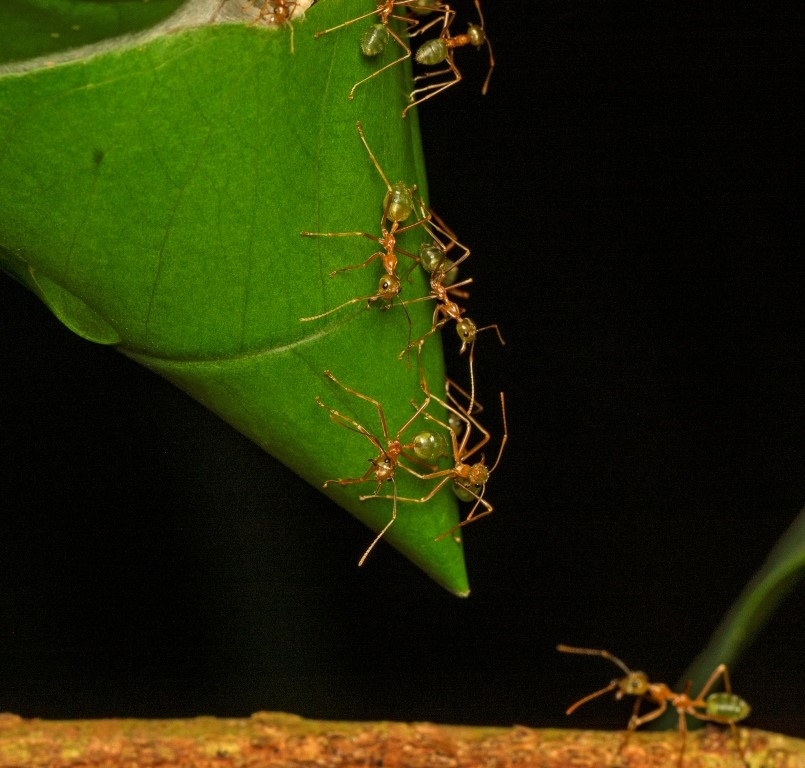 And this is the spider. Up close the mimicry doesn’t look great but the colour match is near perfect and I thought, at first, I was looking at a dead green ant in a web, until it moved. 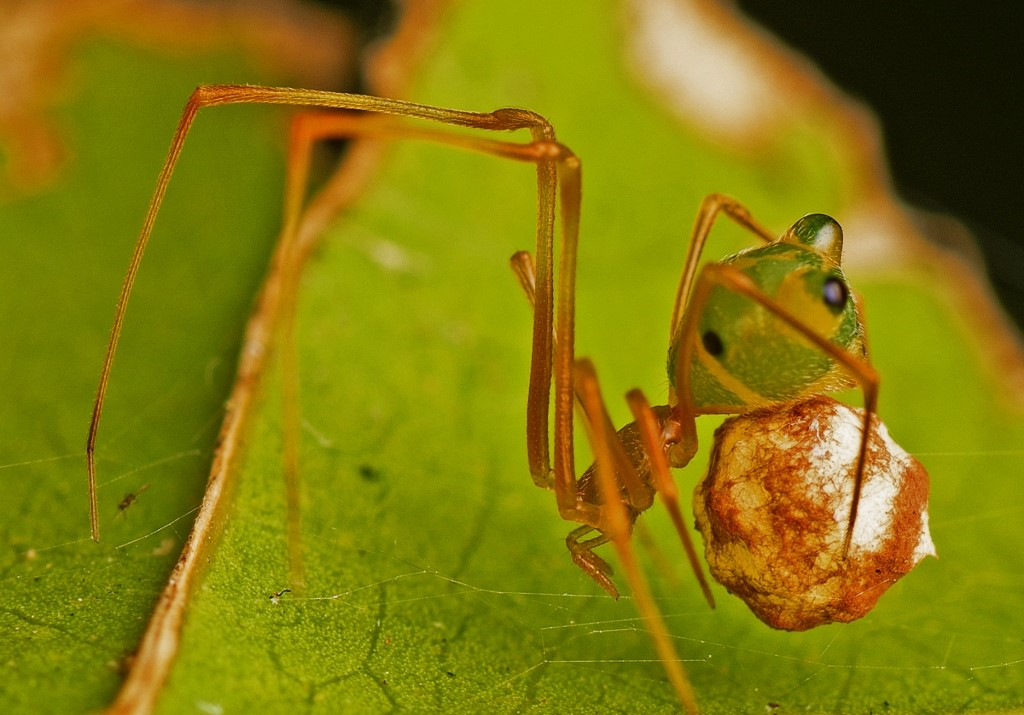 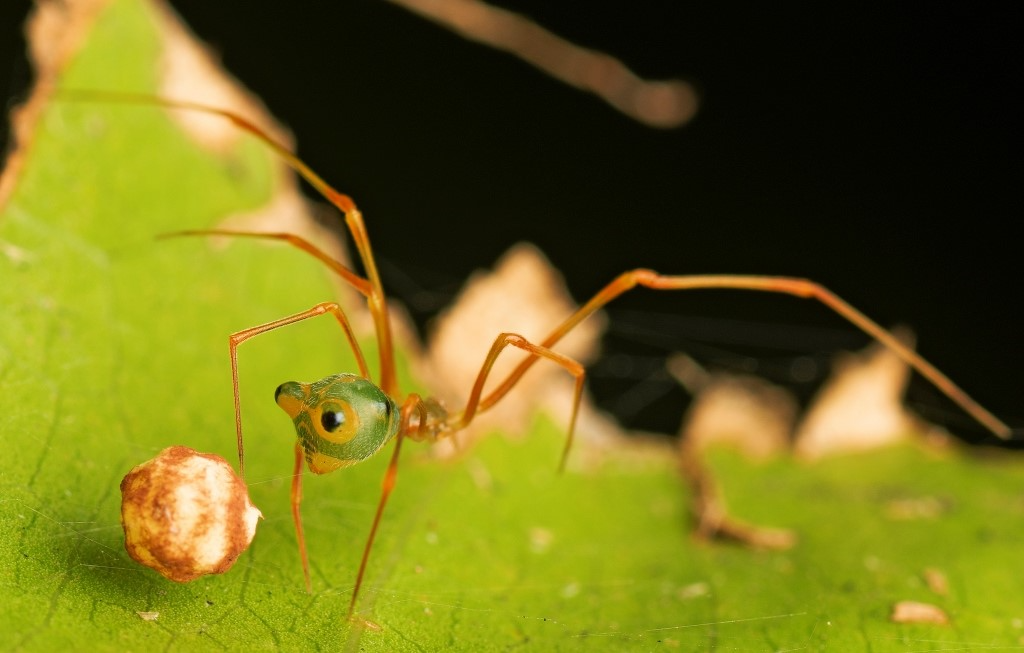 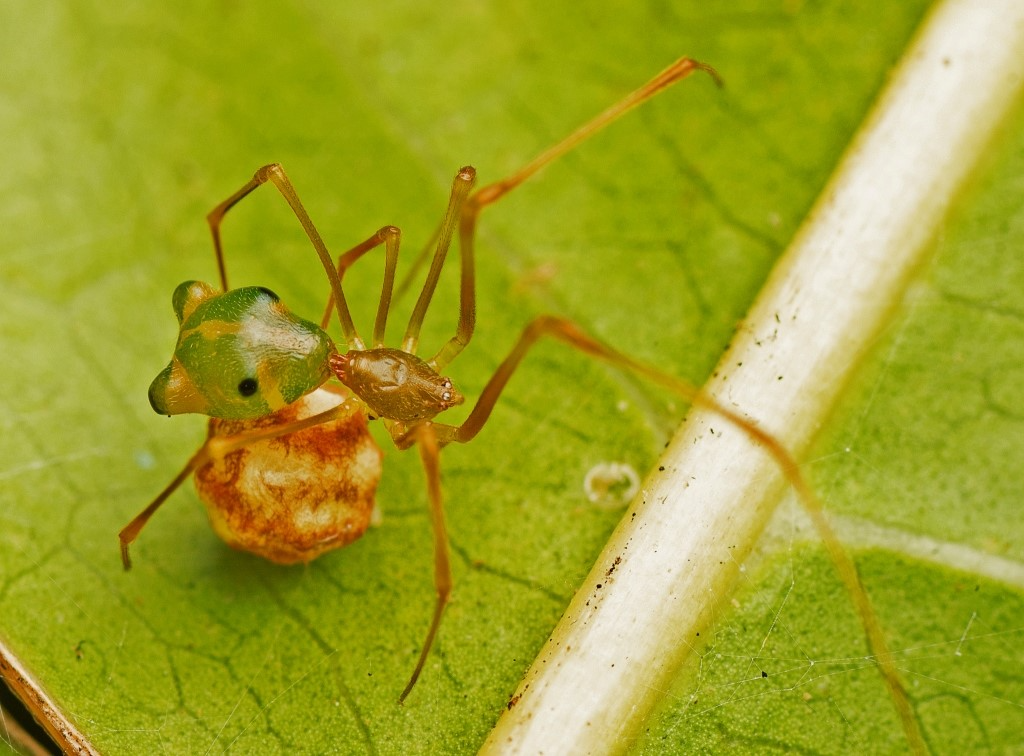 I found my first classic tropical forest Cordyceps fungus. This one is a member of the Ophiocordyceps dipterigena species complex. I wonder what the different forms of spikes are for. 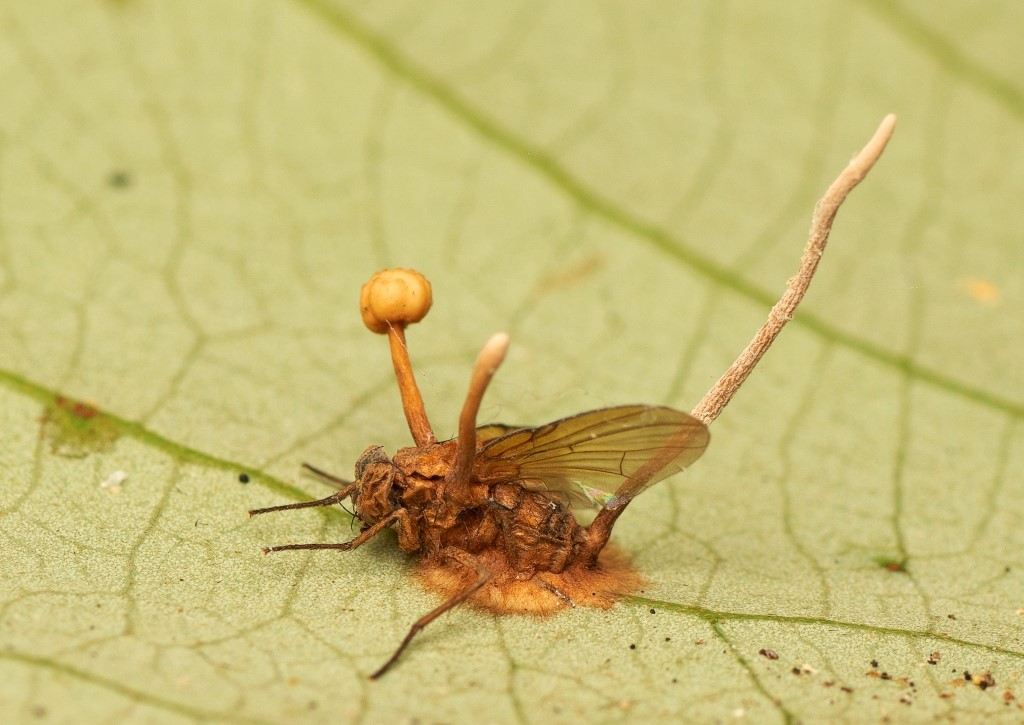 The rainforest at night was full of an extraordinary variety of Katydids, most of them nymphs. These spider-katydids, Paraphisis chopardi, however, stood out for their strangeness even amongst this diversity. They are predatory with fearsome forearms for grabbing prey. 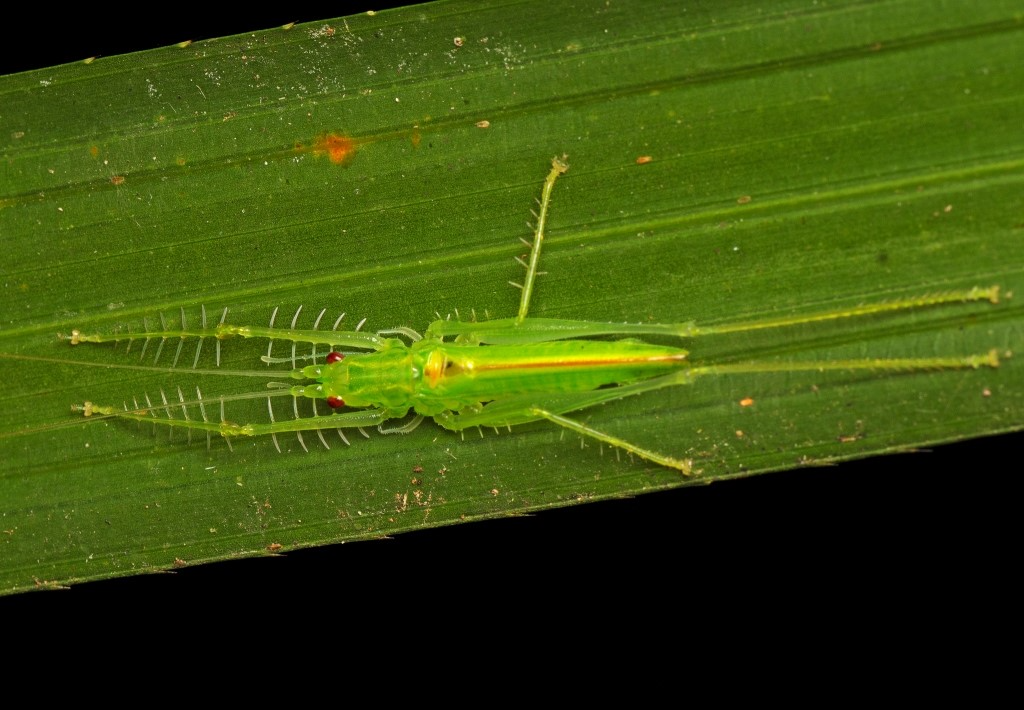 But top of the strange list was this Lace Bug, believed to be Oecharis sp. They only attracted scientific interest in 2020 and remain undescribed as yet. The Lace Bug expert looking into them says they seem to be in the genus Oecharis but look nothing like any known species. I find them charming, like a walking 19th Century glass conservatory. 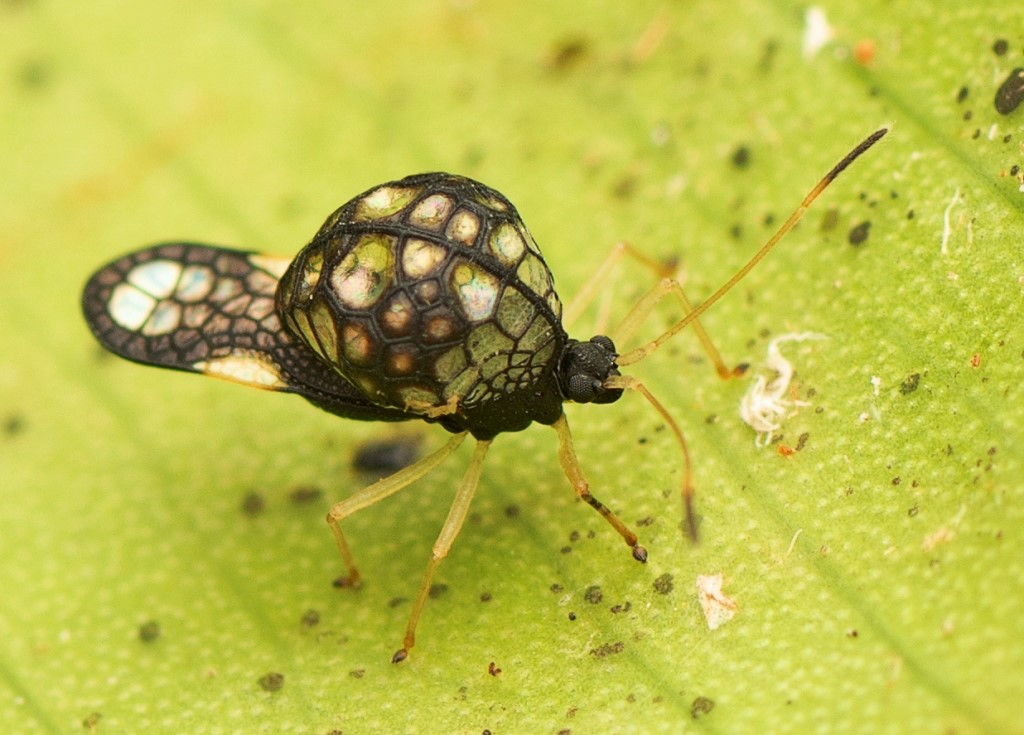 And finally, a mystery. I’ve exhausted my contacts regarding what this could be. The belief is that it’s some kind of spider egg sac. There appears to be some similarities with “silk henge” from South America which is the egg sac of an as yet unidentified spider.  It’s a beautiful little structure, only around 10mm across. 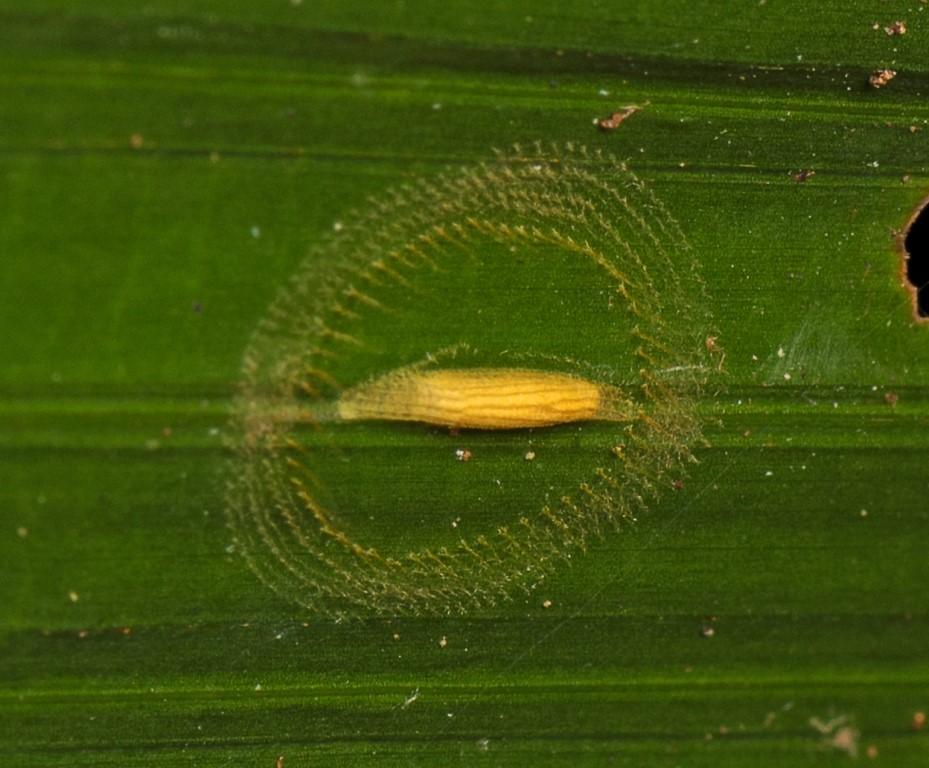