The other day I summarized a Pew study of what factors Americans thought should be prioritized in making college-admissions decisions.  High-school grades and standardized-test results were by far the most important criteria, with extracurricular activities a ways behind and race or ethnicity far behind, with only 7% of Americans seeing it as a major factor in college admissions, 19% as a minor factor, and 74% as “not a factor”. (Remember, this is how people think things should be, not how they are.) Other factors were more important than ethnicity/race, including being the first in one’s family to go to college, while two were less important (gender and whether a relative attended the school).

This ordering of criteria held for all groups surveyed, including ethnic groups, Republicans and Democrats. The importance of criteria varied, with race/ethnicity—the subject of debates over affirmative action—being rated as a more important criterion for Asians, blacks, and Hispanics than for whites; but in no ethnic group did fewer than 59% of respondents see race/ethnicity as “not important” as a factor.

Today we have a related study from Inside Higher Ed (click on screenshot below), which gives nearly identical results from a different sample (and using different questions). The study was conducted by by The Washington Post and the Schar School of Policy and Government at George Mason University. 1,238 adults were surveyed (Pew used 11,687).  The results are given in the headline:

There’s not much text, but the article gives two bar charts.  If we compare the “support Supreme Court ban on affirmative action” data below with data from the Pew study (using “race not important” as the equivalent of “support Supreme Court ban”, we get comparable but not identical results.  The comparison: of all US results, 63% here as compared to 74% in Pew, among whites we get 66% here compared to 79% in the Pew study, among blacks we get 47% here as opposed to 59% in the Pew study, among Hispanics we get 50% here as compared to 68% in the Pew data, and for Asians (plus Pacific Islanders) we get 65% below compared to 63% for Asians from Pew. 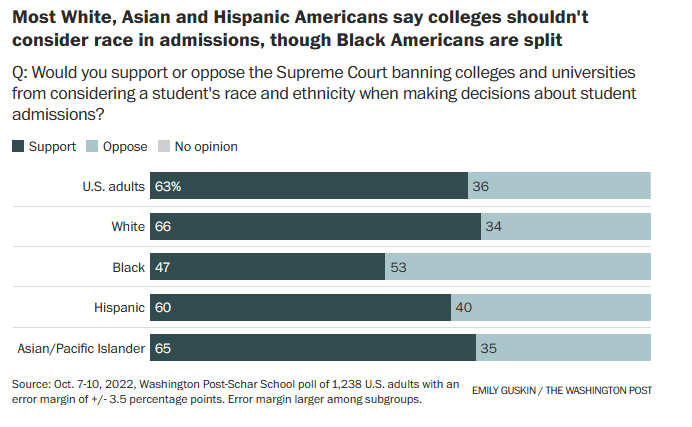 However, every group polled thinks that programs designed to increase racial diversity of college students are a “good thing”. This is not expected from the data above, in which most groups show support for banning affirmative action. This is somewhat of a paradox because affirmative action is one of the only programs that can increase diversity among college students. 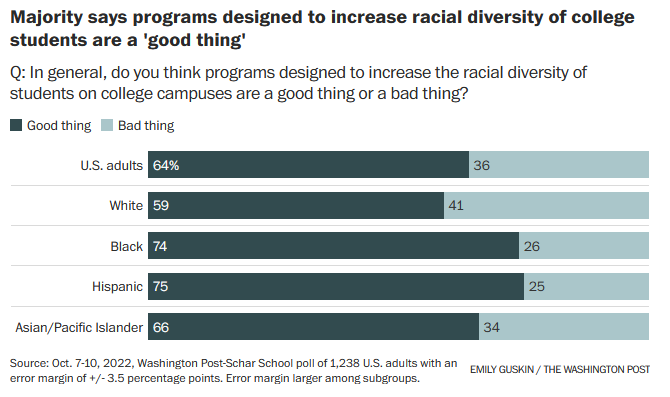 The conclusion: Americans are to some extent confused. Most support the Supreme Court making laws banning affirmative action yet most think diversity is a good thing.  And most don’t think race should be an important factor in admission. Perhaps the conflict here is the coercion imposed by a Court ruling, or perhaps respondents saw other ways to increase the good of racial diversity on campus beyond a Supreme Court ruling. I suppose there are many explanations for this disparity, including simply different samples, or that, in the poll reported here, the respondents the way they thought the pollsters wanted to hear. Readers are welcome to comment.

I think racial diversity is a good thing, but my dilemma has always been that to increase it, one needs to reduce the “meritocratic” standards usually used for admissions.  I’m coming around to the view that affirmative action is tenable but on a socioeconomic rather than a racial basis. That kind of affirmative action will certainly increase racial diversity, but will do so without violating the upcoming Supreme Court decision that will ban race as a criterion for admission. (It’s almost a given that this decision will occur.)

35 thoughts on “Most Americans don’t think race should be an important factor in college admission decisions, but most favor racial diversity as good thing yet back a Supreme Court ruling banning affirmative action”