Although colleges and universities are, left and right, dropping or devaluing high school grades and standardized tests as criteria for admission, the American public still maintains that these two factors (which I’ll consider as indices of “merit”) are the most important considerations, ahead of “community service and involvement” and well ahead of being first in your family to go to college, athletic ability, race or ethnicity, gender, and whether one is a “legacy” (i.e., had a relative attend the applicant’s school). This is what today’s article concludes.

The big contention, of course involves whether one should consider “merit” (as evinced by tests and grades) a lot more important than “race or ethnicity”. This is the conflict involved in debates about affirmative action.  But according to this Pew study in March, all groups see indices of merit as more important than ethnicity, though the emphasis on merit has dropped a tad in the last three years. But the order of importance of the eight factors shown below, including legacy admissions and “outside activities,” hasn’t changed since 1999.

Click on the screenshot to see a summary of the study. (The methodology is here, detailing the use of 11,687 subjects.)

Here are the overall results, lumping all Americans together. Each criterion was weighted by each respondent as “major”, “minor” or “not a factor” in how they should be weighted for college admissions. 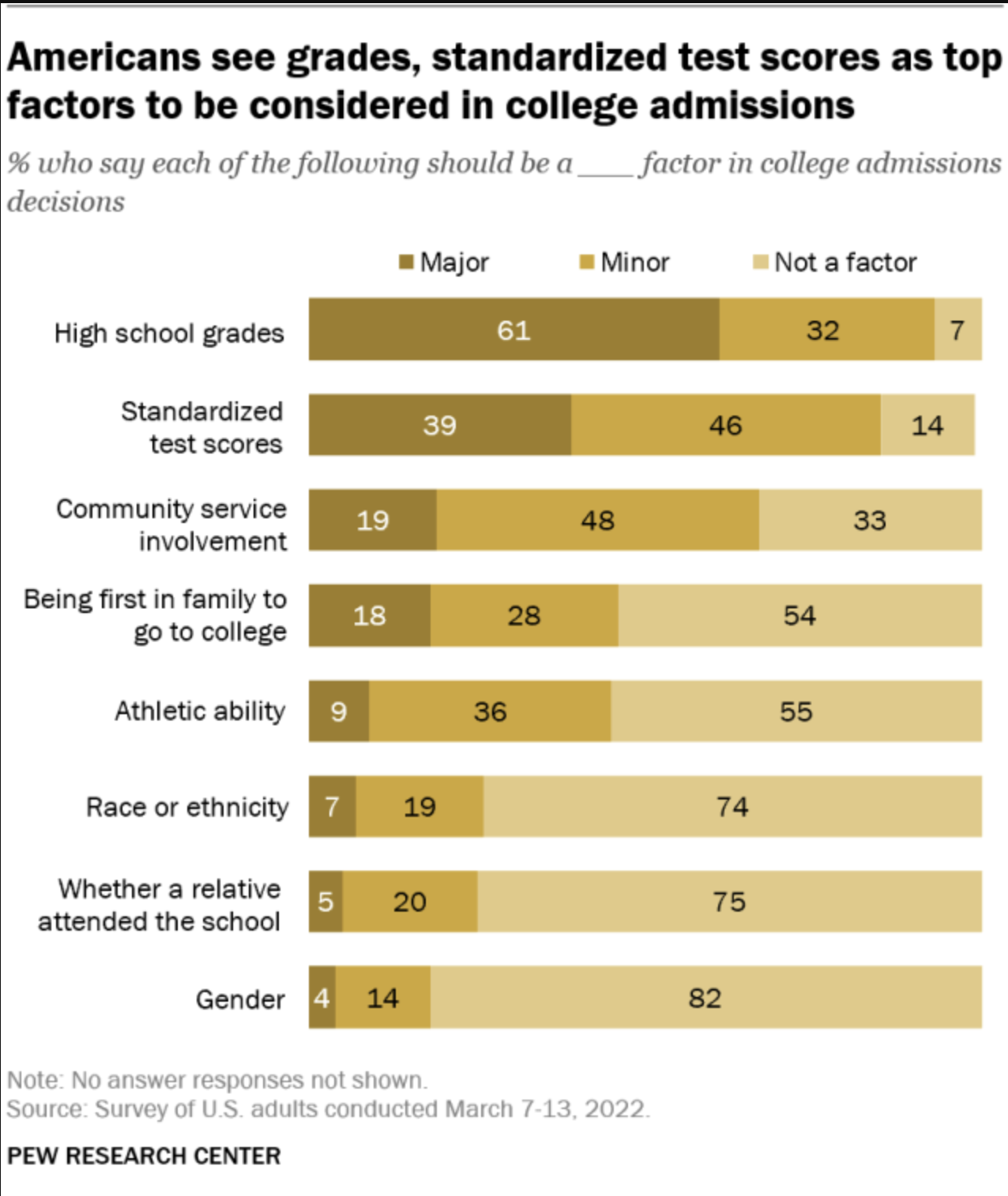 As you see, high-school grades are by far the most important criterion, followed by standardized tests, and then, in decreasing order of importance, “first in the family,” athletic ability, race or ethnicity, legacy admission, and gender.  I would reverse grades and standardize tests, since standardized tests put everyone on the same scale, while high school grades vary tremendously among schools. Rather than “community service involvement,” I’d use “extracurriculars” as an index of breadth of interests.  For “race or ethnicity” I’d substitute “socioeconomic class”, which would allow a form of affirmative action for racial groups but also give a leg up to the disadvantaged in other groups.  Then “first in family”, which is correlated with socioeconomic status. I wouldn’t consider athletic ability at all, nor whether one’s relatives attended the school, but schools use the latter criterion as a way of ensuring an income stream from families with an intergenerational college affiliation.

I’m not sure about gender, as more women than men now get college degrees, so the problem is largely solved. But I’d make an exception for historically male colleges like military schools, where qualified women should be admitted on the same basis as qualified men.

Here’s the inter-year comparison (2019 vs. 2022) of how grades and standardized tests are rated, which is of lesser interest than how different population groups and how Democrats vs. Republicans see these factors. Blacks and Hispanics tend to see high school grades as less important than do whites and Asians, while Republic and and Democrats are pretty equal on the importance of grades. 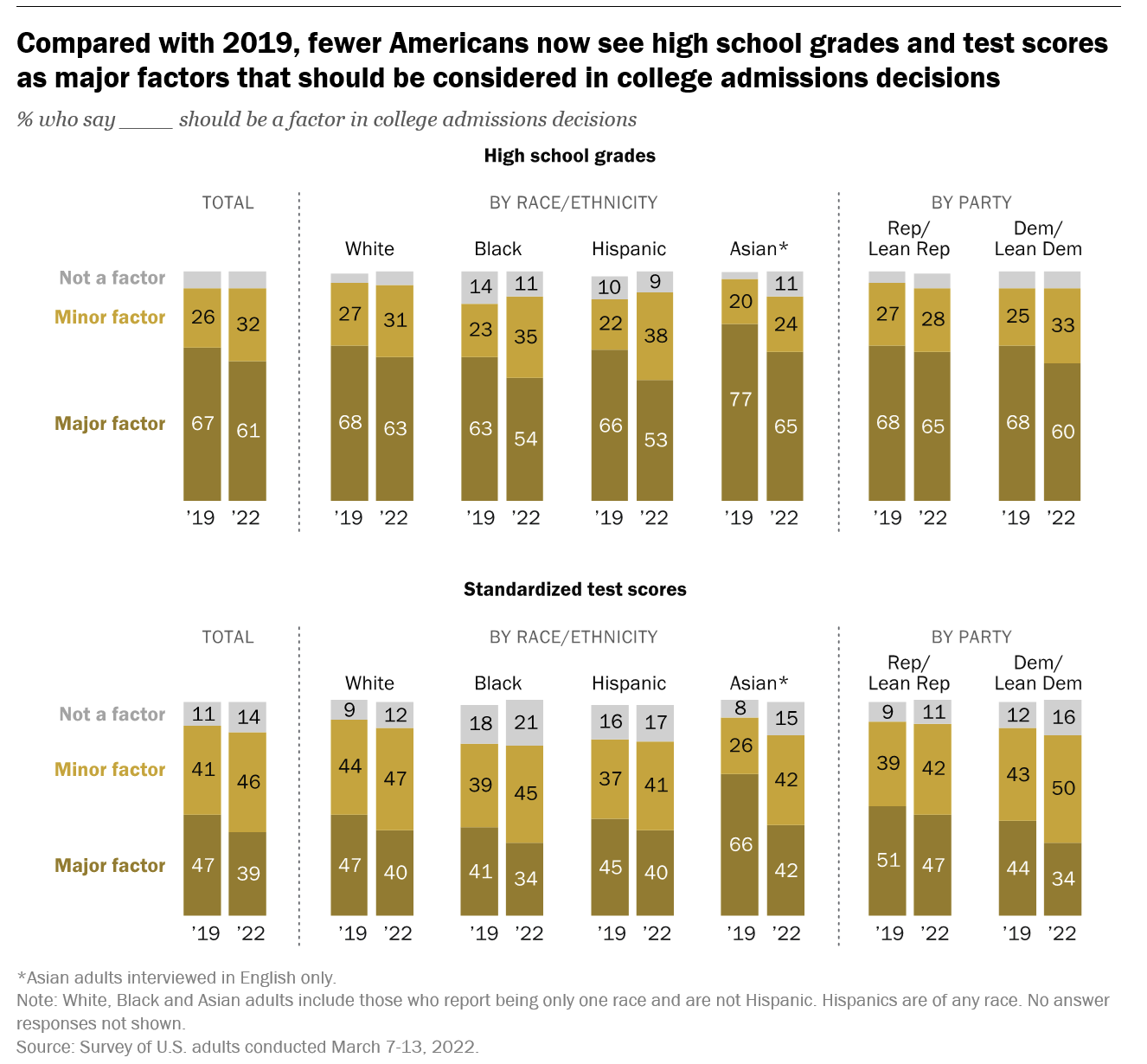 Finally, we have a bar graph showing how different ethnic groups—and Republicans vs Democrats—regard legacy, first-generation status, and race/ethnicity as weighting factors for admissions.  All three “groups of color” see “first in family,” “legacy” and “race and ethnicity” as more important factors than do whites.  I can understand these data except for the “legacy” part, which I would think would be less emphasized in groups of color.  There’s also a substantial difference between Democrats and Republicans on the race/ethnicty and “first in family” criteria, with Republicans putting less weight on race/ethnicity and “first in family” criteria. That, too makes sense since Republicans, in my view, care less than Democrats about “leveling the playing field”. Political affiliation makes little difference, however, in how one weights “legacy” as a criterion. 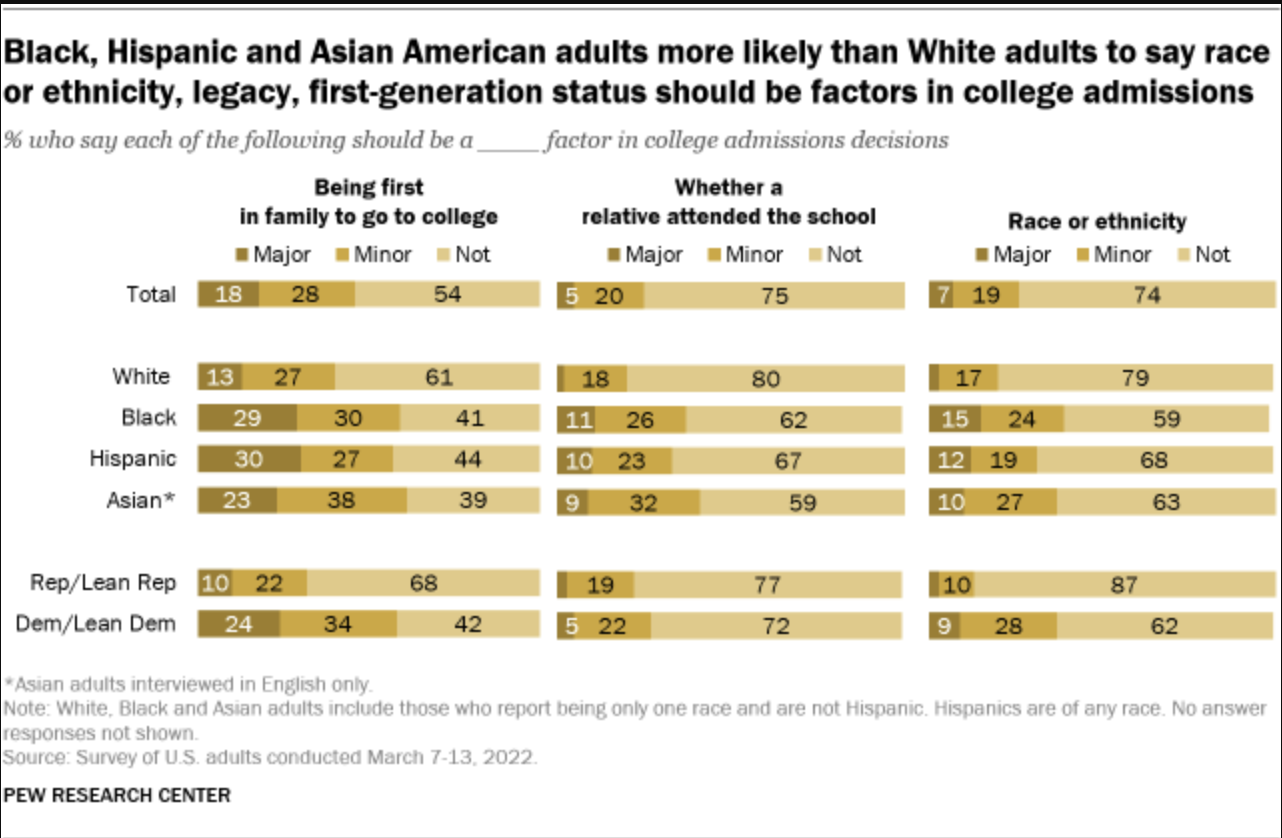 In sum, the public apparently still wants grades and standardized tests to be the most important criteria for admission to college, with “activities” a bit behind and other factors, including race/ethnicity, far behind.  In the public’s view, including the views of blacks, Asians, and Hispanics, the debate between merit vs. ethnicity seems to have been settled, though a ranking doesn’t rule out affirmative action—it just makes race a less important criterion for helping a student jump the merit queue.

This debate, however, will all be settled when the Supreme Court bans affirmative action in its next term.