Yes, there’s a book coming out called “Marx For Cats”, and it’s apparently not a joke, according to David Rieff’s Substack column. As he notes:

Duke University Press is about to publish Marx for Cats: A Radical Bestiary by a professor at the City University of New York named Leigh Claire La Berge. The gambit of the book, Professor La Berge writes, “is that the history of Western Capitalism can be told through the cat and that doing so reveal a heretofore unrecognized animality at the heart of Marx’s critique.” Cats, it seems, “have long been creatures of economic critique and communist possibility.” However, Professor La Berge insists, “a specter is haunting Marxism, the specter of the cat and the time has come for a feline critique, both of capitalism and of Marxism.”

It would be pleasant to imagine that Professor La Berge was mounting an elaborate, Alan Sokol-style prank (including on Duke University Press), but this is anything but the case. To the contrary – guess what? – the joke’s on us: she is in deadly earnest. There is even a video on, yes, MarxforCats.com in which La Berge in all seriousness explains key Marxian concepts to an audience of cats, going so far as to pose questions to them such as, “What is a commodity?”, and then, “Is art a commodity?” At one point, she even them a passage from Marx’s text, “Bourgeois Revolutions.”

Rieff doesn’t pull punches about what he thinks of the book:

What would a generation ago have been called delusional – the stuff of people in lunatic asylums who imagined themselves to be Christ or Cleopatra – is now called cutting edge critical theory. . .

. . . If ever there were a demonstration of what one sardonic person on twitter, who styles herself ‘Uppity Witch,’ and tweets at @senjii2022, has called the “deep vein of puerile immaturity that drives modern culture,” it is Marx for Cats. And yet increasingly that is precisely what not only what the humanities within the Academe have become, but also what the culture in general has become: a subsidized play pen in which those within its confines produce nothing so productive as a sand castle, but instead deliver their daft fancies with a passionate conviction born of the belief that theirs is not a but the emancipatory project of our time. I do not see how such a culture can be saved, nor any earthly reason why it should be mourned, and only hope to live long enough to assist at its funeral rites.

Well, judge for yourself. The book isn’t yet listed on the author’s webpage on Amazon, so you’ll have to listen to the videos below.

There are ten videos on the Marx for Cats Vimeo page, but I couldn’t be arsed to do more than sample them.

And here’s the video. Note: it’s 96 minutes long. Author Leigh Claire is introduced at 6:15 in, gives her spiel for 30 minutes, and then she has a conversation with the moderator. After listening to some of these, I wouldn’t recommend spending much time; these are snoozerinos. The only good bit are the kitties, to which she lectures in deadly earnest (see here, for instance).

From I Heart Cats, we learn of the sad passing of the world’s oldest cat. Click on the screenshot to read:

The moggy’s name was Rubble:

Ordinarily, when we think about a cat living for a really long time, an age around 20 will likely come to mind. But one feisty feline named Rubble shattered the previous record by making it to the ripe old age of 31.

After living his life without many health problems, Rubble suddenly became ill and passed away shortly before his 32nd birthday. 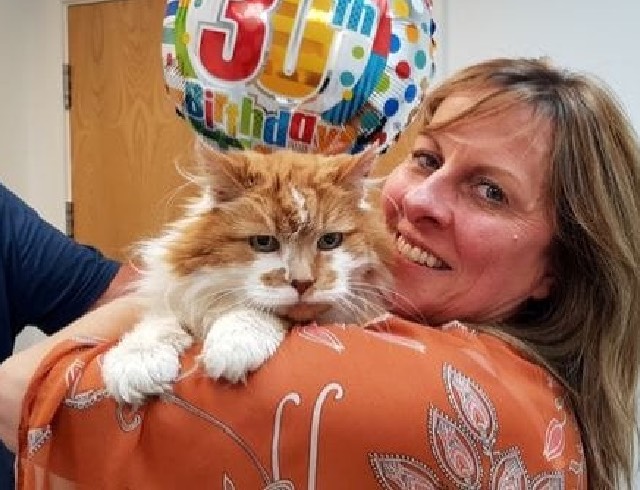 By reaching the age of 31, (150 in human years) Rubble managed to narrowly beat the former record holder, Scooter the Siamese. The Texas native had lived to be 30 years old before he passed away in 2016.

Michele, Rubble’s mom, was gifted the stunning Maine Coon right around her 20th birthday. It was shortly after she moved out of her parent’s place, and she had found living alone to be lonely. It was perfect timing that a friend of her sister was looking for homes for a litter of kittens. The pair had been together ever since.

I think they’ve got it wrong here. If you look at Wikipedia’s list of oldest cats, you’ll find these who have beat Rubble:

. . . not long before his upcoming birthday, Rubble stopped eating his beloved favorite foods and opted only to drink water instead. This is when his family realized that Rubble was nearing the end of his time here on earth.  The owner said this:

“He became very thin. I went to work as usual and when I got home my husband said Rubble had gone over the road as he did every day and never came back, so we believe he went off to die as cats do.”

RIP, Rubble. You may not have held the record, but you ha a good run.  BTW, Creme Puff and Granpa Rexs Allen, were owned by the same guy. It’s worth investigating them, especially to see the diet to which their staff attributed the cats’ longevity. 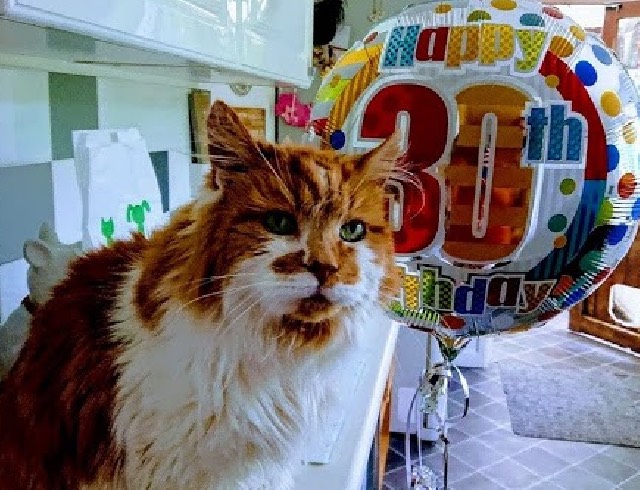 Here’s an article from Science Norway that explains why you can’t get your cat to follow orders. Click on screenshot to read:

The answer is pretty obvious, and much of it is based on their evolutionary history and how they were domesticated (remember, nearly all wild cats, including the closest ancestor of house cats, are solitary:

The reason why it can be hard to get a cat to do what you want is that a cat does not basically accept the premise that you are the boss. Or even that there are bosses.

Moreover, according to the biologist John Bradshaw the cat doesn’t even think of us as a different species. It thinks we are big cats.

As cats have not been bred over the millennia like dogs, they are not as domesticated. They have been kept for their natural ability to keep rodent populations down, but have never been bred to perform any special function.

They are not designed by nurture or nature to fetch sticks or guard the house. And as 85 percent of cats mate with wild males, the species has remained relatively wild.

Bradshaw says that the way cats relate to humans is driven more by instincts than by learned behaviour.

Actually, you can train cats, as you’ll know if you’ve seen videos of performing cats in “cat circuses”. Of course they can’t do anything more elaborate

Here’s the author’s list for how to train a cat if you’re foolish enough to try. The bon mot of Samuel Johnson applies here:

“Sir, a woman’s preaching is like a dog’s walking on his hind legs. It is not done well, but you are surprised to find it done at all.”

Lagniappe: The world’s biggest cat (I won’t vouch for it) has also passed away. Click on screenshot:

Weighing an impressive 28lbs. and reaching lengths of four feet, Samson, also called Catstradamus, was an enormous cat. As a Maine Coon, he was expected to be large as the males of the breed average 13 – 18 pounds and lengths of up to 40 inches. Making others in his breed look like little kitties, Samson was something else with his amazing size. But at ten years old, his big body was feeling its size and age.

On Instagram, dad Jonathan Zurbel explained that hip dysplasia and osteoarthritis sometimes made it difficult for Samson to walk. But with his family giving due diligence to their furry king’s quality of life, Samson still enjoyed a good living. But an unexpected trip to the vet changed everything, and suddenly, Samson was gone, leaving his family, including kitty sibling Dante, to mourn their deal furry angel. 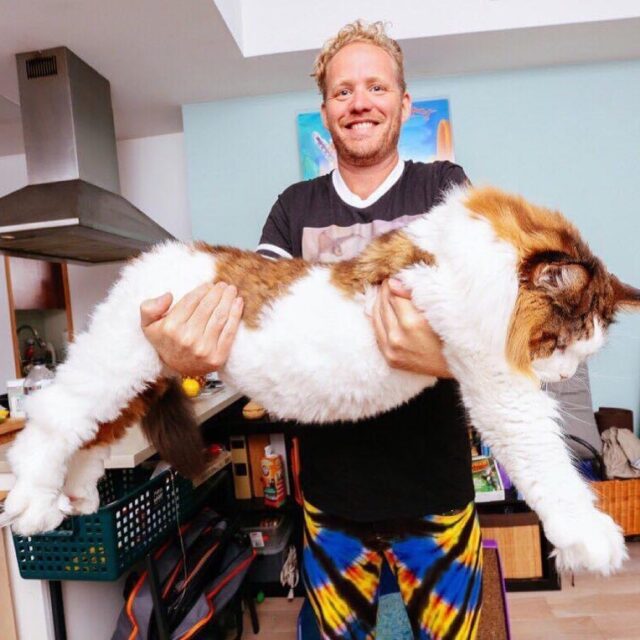 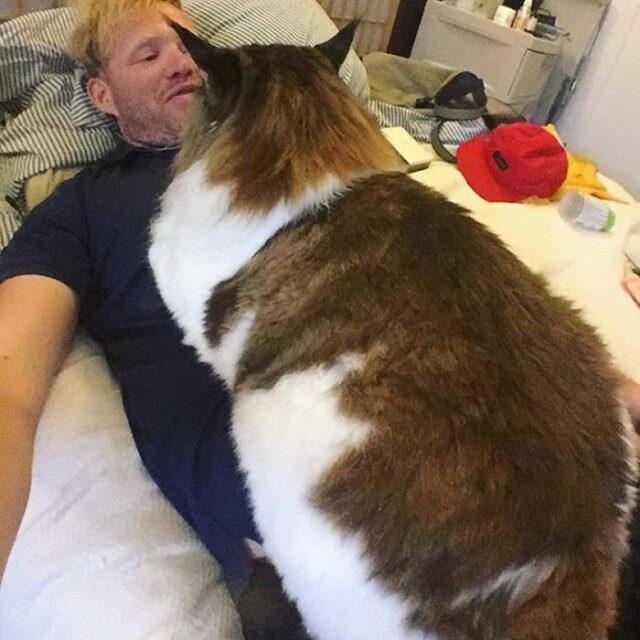