Top o’ the morning to you on this Thursday, October 20, 2022: it’s National Eggo Day, celebrating a brand of frozen waffle (and probably created by the maker). Here’s the famous Eggo slogan in the first of many Eggo commercials.

Posting will be light today as I am absolutely knackered from lack of sleep.

It’s also National Brandied Fruit Day, National Chicken and Waffles Day (it sounds weird, and I’ve never tried it, but many people like this combination), Office Chocolate Day, World Osteoporosis Day, and World Statistics Day, which is actually celebrated only once every five years and won’t really be celebrated until 2025.

Readers are welcome to tell us about notable births, death, and events that happened on this day; consult the October 20 Wikipedia page.

*Britain is politically screwed, with Prime Minister Liz Truss, having one foot on a banana peel and the other on ice, being jeered in Parliament at “question time”. First, she just fired one of her top ministers, Home Secretary Suella Braverman, because Braverman sent a government document over private email (a much bigger deal in the UK than in the U.S.), and this was after she had fired fired Kwasi Kwartent, the chancellor of the Exchequer and architect of Truss’s promised but disastrous tax cuts. The government’s chief whip reportedly resigned, though that appears untrue now. And there’s this:

Under tough questioning by opposition lawmakers, Ms. Truss managed to reveal yet another reversal in the government’s policy. On Tuesday, senior officials had signaled that Downing Street might no longer honor an election guarantee to increase state pension payments to keep up with both average earnings growth and the inflation rate, which is now at 10.1 percent.

People at question time demanded her resignation while jeering her, but Truss has vowed not to resign. I suspect, however, that she won’t last long at the helm.

Reader Simon, an expat Brit, sent Larry the Cat’s take on the situation:

“She didn’t hide under the desk for PMQs so we thought it was going to be a good day but then the Home Secretary had to resign in disgrace and the Chief Whip’s just quit, so it’s sort of evened out” pic.twitter.com/KoV6JfX62H

*A new paper in Nature, summarized in the NYT, represents the first discovery of a Neanderthal “family”, or group of relatives, ever reported.  Here’s the abstract, which I think readers will be able to understand:

Genomic analyses of Neanderthals have previously provided insights into their population history and relationship to modern humans, but the social organization of Neanderthal communities remains poorly understood. Here we present genetic data for 13 Neanderthals from two Middle Palaeolithic sites in the Altai Mountains of southern Siberia: 11 from Chagyrskaya Cave and 2 from Okladnikov Cave—making this one of the largest genetic studies of a Neanderthal population to date. We used hybridization capture to obtain genome-wide nuclear data, as well as mitochondrial and Y-chromosome sequences. Some Chagyrskaya individuals were closely related, including a father–daughter pair and a pair of second-degree relatives, indicating that at least some of the individuals lived at the same time. Up to one-third of these individuals’ genomes had long segments of homozygosity, suggesting that the Chagyrskaya Neanderthals were part of a small community. In addition, the Y-chromosome diversity is an order of magnitude lower than the mitochondrial diversity, a pattern that we found is best explained by female migration between communities. Thus, the genetic data presented here provide a detailed documentation of the social organization of an isolated Neanderthal community at the easternmost extent of their known range.

Detecting this was possibly only because we can now sequence fossil human DNA and, sure enough, Svante Pääbo, new Nobel Laureate in biology, is one of the authors. They used rare DNA variants to ascertain relatedness, and read the article to see the clever way they proved that one pair was a father and his daughter. As for the other individuals, it’s not clear how many of them lived at the same time, but they were certainly close in time given their relatedness. The greater migration of females than males is interesting because that’s also what we see in our closest relatives the chimpanzees and bonobos.

*As expected when abortion is made illegal, women find ways to get around it, and that’s what’s happening now with the smuggling of abortion pills from Mexico into the red states that have nearly banned abortion. This is done largely on social media, and there are still dangers.  How do you know what you’re getting?

The emerging network — fueled by the widespread availability of medication abortion — has made the illegal abortions of today simpler and safer than those of the pre-Roe era, remembered for its back alleys and coat hangers. Distinct from services that sell pills to patients on the internet, a growing army of community-based distributors is reaching pregnant women through word of mouth or social media to supply pills for free — though typically without the safeguards of medical oversight.

The Washington Post found out how this works by interviewing 16 unnamed people (they’re breaking the law):

Those interviewed described a pipeline that typically begins in Mexico, where activist suppliers funded largely by private donors secure pills for free as in-kind donations or from international pharmacies for as little as $1.50 a dose. U.S. volunteers then receive the pills through the mail — often relying on legal experts to help minimize their risk — before distributing them to pregnant women in need.

The system could upend Republican plans for a post-Roe America. Despite the strict abortion bans that have taken effect in over a dozen states, some antiabortion leaders fear that the flow of abortion pills could help make abortion more accessible than it was before Roe fell. Las Libres, one of several Mexican groups at the center of the network, says its organization alone is on track to help terminate approximately 20,000 pregnancies this year in the United States. That amounts to about 20 percent of all legal abortions that took place in 2019 in the 13 states where abortion is now almost entirely banned.

Finally, you can see at least three or four problems stemming from this system, as described above and here:

The medication — a two-step regimen of mifepristone and misoprostol — was approved by the U.S. Food and Drug Administration in 2000 with a prescription, for use during the first seven weeks of pregnancy, a limit that was then extended to 10 weeks in 2016. But people involved in the network described a process that goes beyond what the FDA has endorsed. Organizations like Las Libres offer abortion pills without a prescription and, typically, without access to a medical professional —occasionally providing medication to those who say they’re at or beyond the FDA’s 10-week limit. To avoid detection in antiabortion states, the group also mails pills unmarked and unsealed, often in old bottles used previously for other medicines.

*Putin has declared martial law in those four regions of the Ukraine he annexed illegally and then claims to own because he held bogus elections there. As the AP reports:

Putin’s drastic efforts to tighten his grip on Ukrainians and Russians follow a series of embarrassing setbacks: stinging battlefield defeats, sabotage and troubles with his troop mobilization.

The martial law order belies the Kremlin’s attempts to portray life in the annexed regions as returning to normal. The reality is that a military administration has replaced civilian leaders in the southern city of Kherson and a mass evacuation from the city is underway as a Ukrainian counteroffensive grinds on.

. . .Putin’s martial law declaration authorized the creation of civil defense forces; the potential imposition of curfews; restrictions on travel and public gatherings; tighter censorship; and broader law enforcement powers in Kherson and the other annexed regions of Donetsk, Luhansk and Zaporizhzhia.

In an ominous move, Putin opened the door for restrictive measures to be extended across Russia, too. That may lead to a tougher crackdown on dissent than the current dispersal of antiwar protests and jailing of people making statements or providing information about the fighting that differs from the official line.

. . .Under martial law, authorities can force evacuations. Ukraine’s national security chief, Oleksiy Danilov, said on Twitter that Putin’s declaration is “preparation for the mass deportation of the Ukrainian population to the depressed regions of Russia to change the ethnic composition of the occupied territory.”

For months, reports have circulated of forced deportations, and an Associated Press investigation found that Russian officials deported thousands of Ukrainian children to be raised as Russian.

I’m a pacifist, but I find myself wondering if somebody shouldn’t just take Putin out. No chance of that, now with the security he’s got. He’s not going to give up those territories, either.

*I had no idea that famous Americans were put onto quarters (I don’t usually look at them), but, according to the Wall Street Journal, a new quarter will feature the Asian-American Actress Anna May Wong.

Ms. Wong, born Wong Liu Tsong in 1905 in Los Angeles, was Hollywood’s first Chinese-American movie star. She appeared in more than 60 films, including 1922’s “The Toll of the Sea,” one of the first silent movies filmed in color. Ms. Wong, who also had roles on stage and television, received a star on the Hollywood Walk of Fame in 1960, about a year before she died.

The coin’s tail side features a close-up of Ms. Wong’s face, her chin resting on her hand. A finger points toward her name inscripted by her cheek.

“This pose might suggest she has been waiting for the kind of recognition that being on a United States coin might finally bring,” Emily S. Damstra, who designed the coin, said on her website.

Round spots surrounding Ms. Wong represent the lightbulbs of a movie theater marquee sign, Ms. Damstra said. The coin’s other side looks like a typical quarter with a profile of George Washington.

I like Anna May Wong, and I have no objection to honoring Americans this way, but the coin is BUTT UGLY. Have a look and see if you agree:

There are more coins to come:

Writer Maya Angelou and astronaut Sally Ride were on quarters released earlier this year. The first one next year will feature Bessie Coleman, the first Black woman to earn an international pilot’s license.

Hili: It’s the beginning.
A: Beginning of what?
Hili: Of the game of leaf raking. 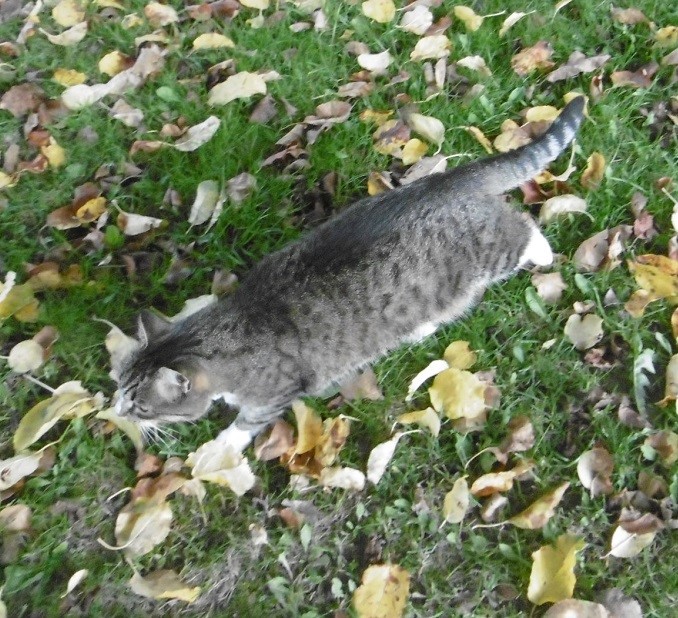 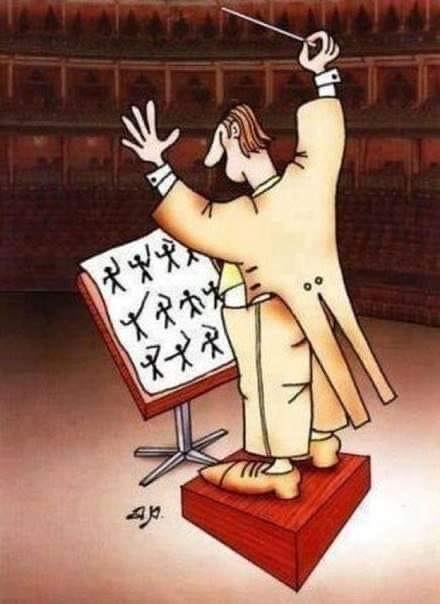 From the Otter News Group: 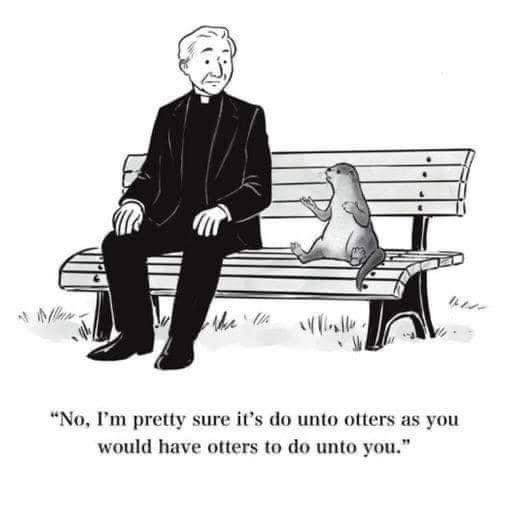 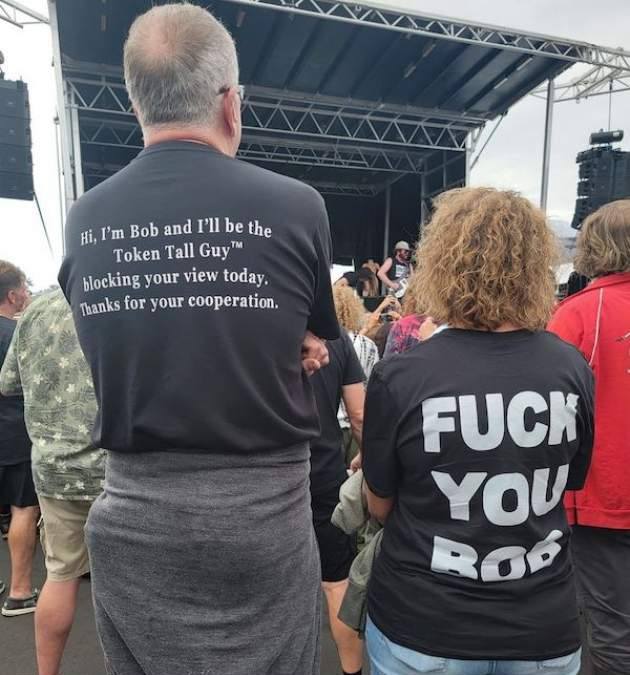 A tweet from God, who’s really down on the Iranian regime.

How many men, women and children must die?!
More, unfortunately.
But these inhuman bastards WILL be taken down.
https://t.co/ZbYThx2wlC

From Masih. How heartening that schoolgirls help lead a revolution, and yet how sad that some of them will die for this:

On the Whiteboard they wrot; “Woman Life Freedom” the slogan of a Revolution in Iran lead by women Shoulder to shoulder with men against Islamic revolution.#MahsaAmini Is becoming a symbol of resistance against tyranny.#مهسا_امینی

From Simon: a cat befuddled by a bubble:

“What kind of sorcery is this?” 😂 pic.twitter.com/TDz4h0zYOb

From Malcolm we get a lovely murmuration, probably of starlings:

A 35 second mindful moment from this morning’s Snettisham knot spectacular. Another reason why we must all fight for our wildlife #ActionforNature @RSPBEngland pic.twitter.com/RWjOo7MnD8

In October 1944 she was deported to #Auschwitz from #Theresienstadt ghetto with her mother Julia. They were both murdered in a gas chamber. pic.twitter.com/08vVMnF0tm

Tweets from Matthew. Here’s Warhol and Nico, both no longer with us:

Andy Warhol and Nico as Robin and Batman.
Esquire, 1967. pic.twitter.com/UT2jyHDxAM

Thanks to global warming, you can now drive across the Mississippi River:

The #Mississippi River at record low levels in many areas. Here near #Tiptonville, TN people are walking and vehicles have been driving on dry river bed that would be totally under water in normal conditions. #MOwx #TNwx #ARwx #MSwx pic.twitter.com/u4UKW7jXf4