The chickens have come home to roost in Alex Jones’s purse, and they’re going to pick it clean.  Just a few minutes ago, a jury in Connecticut ruled that the Infowars loon will have to pay the families of Sandy Hook victims (and an FBI agent) almost a billion dollars. Here’s the NYT story ripped from the headlines: 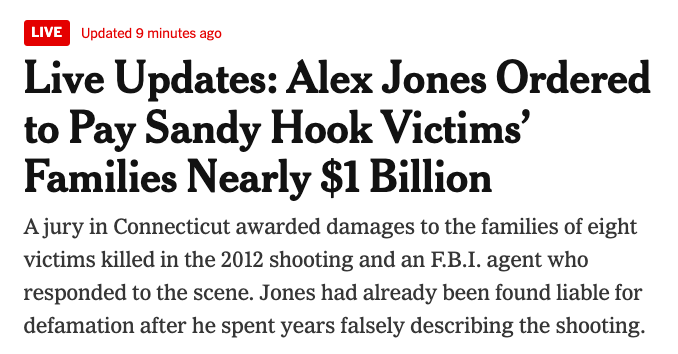 Alex Jones and Infowars’ parent company, Free Speech Systems, must pay close to $1 billion to the family members of eight victims of the shooting at Sandy Hook Elementary and an F.B.I. agent who responded to the scene of the 2012 massacre, which killed 20 first graders and six educators.

Mr. Jones had been found liable for defamation after he spent years falsely describing the shooting as a hoax and accusing the victims’ families of being actors complicit in the plot. As a result, the families were threatened in person and online. He used his Infowars platform to spread these lies.

Alex Jones may be wealthy, but I don’t think he has a billion dollars, and the final damages are yet to come

Yet the man is unrepentant.  Soon he will be selling pencils from a tin cup on a street corner:

Jury sends clear message to Alex Jones that they believe he needs to stop.