A new report in Nature (click on screenshot below), summarizes a longer study in the same journal (original paper here, free pdf of paper here). The point of the summary, and much of the original paper, is that tenure-track faculty in U.S. tend to come from a small number of what the author, Anna Nowogrodzki, calls “elite universities.” (The rest of the report is on recruiting of women into the professoriate, which is increasing, but only as older male faculty retire. I won’t discuss that part.)

That, in turn, means that having gone to one of those schools appears to increase your chance of getting a tenure-track job by tenfold over the “average” institution.  To Nowogrodzki, and apparently to the authors of the original paper, this degree of enrichment of faculty is an unacceptable form of elitist bias: a form of bigotry against professors who don’t go to the 20% of “elite” colleges (many of them are not really seen as “elite” schools, but as “good” schools).  And the implication, which is not subtle, is that hiring decisions are made largely on the basis of where you got your Ph.D.  I’m sure you can already see the fallacy in that.

Here’s the figure included, with the schools divided into five groups, each containing an equal number of faculty members at Ph.D.-granting schools. The skew is clear: 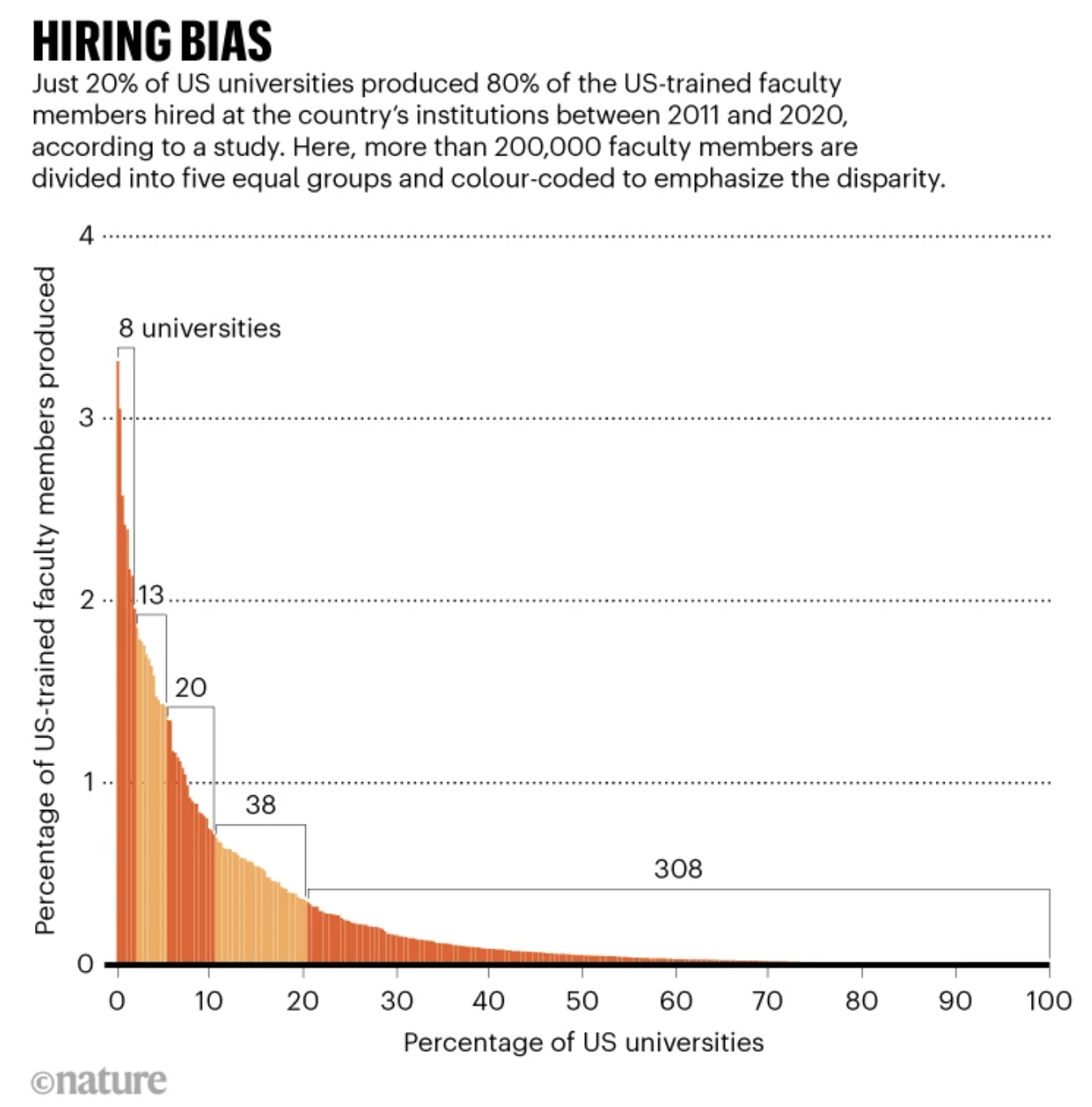 There are two tweets below, the first reprouduces data from the paper but is a bit misleading on two counts: it’s not 20% of all professors in the U.S., but 20% of professors employed at Ph.D-granting universities. Nevertheless, the assertion that Strohminger makes about the contribution of the top eight schools (not all mentioned in the article) is correct. It’s clear that there is enrichment and inequality of contributions: the figure above is highly skewed to the left, not flat.

In fact, the top 5 universities have minted more faculty (13.8%) than all non-US schools combined (11%). I don't think it should surprise anyone that PhD institution matters when it comes to hiring, but these numbers are even starker than I was expecting pic.twitter.com/EPfn67CRpe

What does the enrichment mean? To writer Nowogrodski, it apparently has to be interpreted as producing a kind of unwarranted elitism that gives the graduates of these schools an undeserved advantage over graduates of others. She also implies that this constitutes a form of racial bias. I’ll give some quotes, but you can interpret them for yourself.

Specifically, the study, published in Nature on 21 September, shows that just 20% of PhD-granting institutions in the United States supplied 80% of tenure-track faculty members to institutions across the country between 2011 and 2020 (see ‘Hiring bias’). No historically Black colleges and universities (HBCUs) or Hispanic-serving institutions (HSIs) were among that 20%, says Hunter Wapman, a computer scientist at the University of Colorado Boulder (CU Boulder) and a co-author of the paper.

I’m not surprised at that: these colleges produce very few Ph.D.s compared to some of the colleges above, which are very large and give out tons of Ph.Ds.  No numbers are given about production of Ph.D.s, but good applicants from these historically minority colleges would be snapped up immediately.

Here’s the bit implying that this disproportionality is an unwarranted sign of bias. First, Nowogrodski changes the term “disproportionality” to “elitism,” and then implies that hiring decisions are often made largely on the basis of where you got your Ph.D. That is simply wrong. But let’s get to what the author really wants to say: the “elitist” disproportionality is, in the end, a cause of racial inequity among faculty. And if you’re a Kendi-an, inequity is a prima facie sign of racism. Now the author doesn’t say that, but it’s clear she’s adhering to the Kendi-an ideology (see below) that the unwarranted hiring concentration on where one got their Ph.D. imposes a form of racial bias, conscious or not.

Hiring committees seem to be using prestige as a proxy for excellence on the job, says Kimberly Griffin, dean of the College of Education at the University of Maryland in College Park. But ‘prestige’ does not necessarily indicate ‘better-qualified’, and prestigious graduate programmes often admit students on the basis of standardized test scores, letters of recommendation and the renown of their undergraduate degree. All of these, research shows, can disadvantage students of colour, says Griffin, who is also editor of the Journal of Diversity in Higher Education.

“Accepting that prestige is a good measure of excellence means that we’re not looking into the history of how things became prestigious,” Gonzales says. The founding of elite US universities is “intertwined with exclusion”, she adds. For instance, many institutions have a history of seizing land from Indigenous groups, or originally derived their wealth from or supported their infrastructure with the labour of enslaved Black people.

First, in all my years on the job, I have never seen someone hired over someone else because of where they got their Ph.Ds. That is, I’ve never heard someone say, “Yes, candidate Smith and candidate Jones are roughly equal in their qualifiecation, but candidate Smith went to Harvard!”  Yes, of course the reputation of the institution attracts the best students, and the best students tend to accumulate the best records, and thus get better jobs.  But Nowogrodzki discounts that, for her criteria for the “best” students aren’t the ones that universities use when judging faculty hires:

Hiring committees seem to be using prestige as a proxy for excellence on the job, says Kimberly Griffin, dean of the College of Education at the University of Maryland in College Park. But ‘prestige’ does not necessarily indicate ‘better-qualified’, and prestigious graduate programmes often admit students on the basis of standardized test scores, letters of recommendation and the renown of their undergraduate degree. All of these, research shows, can disadvantage students of colour, says Griffin, who is also editor of the Journal of Diversity in Higher Education.

“Accepting that prestige is a good measure of excellence means that we’re not looking into the history of how things became prestigious,” Gonzales says. The founding of elite US universities is “intertwined with exclusion”, she adds. For instance, many institutions have a history of seizing land from Indigenous groups, or originally derived their wealth from or supported their infrastructure with the labour of enslaved Black people.

No, no, and no. Hiring committees are looking for the best candidates, and the best candidates tend to have gotten their doctorates from the best schools. “Prestige” schools may rarely be a proxy for excellence, but I’ve never seen that happen.  There are many better criteria for excellence that we’ve learned to use. Hiring committees first look at the scientific output of candidates: have they published, and in good places? Is their work good? Do they have a steady record of scientific output? And then they look at the research plans of the candidate: will they be likely to succeed on our faculty? We have the candidates give at least one talk about their work, assessing both the work itself and the candidate’s ability to communicate—giving an idea of how well they might turn out as teachers. There are one-on-one interviews with each faculty member, and we often grill the candidates quite thoroughly. When you have 45 minutes or an hour at most with the candidate, there’s no time to schmooze.

All in all, hiring is a rigorous process, and I’ve seen it at both ends, as candidate and faculty hiring agent, many times. To write this off by saying that we’re largely using the “prestige of the school where the candidate got their Ph.D” is deliberately misleading.

As for grad schools themselves admitting students based on standardized test scores, letters of recommendation, and “prestige” of the undergraduate school, that’s virtually irrelevant to the hiring of faculty. Did any universities look at my SATs, GREs, or grades when I applied for jobs? (I got no grades in graduate school.) Nope. They don’t even ask for test scores, and I don’t remember being asked for graduate-school grades.

The part about “many institutions have a history of seizing land from Indigenous groups, or originally derived their wealth from or supported their infrastructure with the labour of enslaved Black people” is also irrelevant, as it’s not just “elite schools” that have done this, and no data are presented showing that the “elite” 79 schools that produce 80% of the faculty are more likely to have seized land from Indigenous people or used the labor of enslaved people than other schools. That accusation is just thrown into the mix to gloss the data with a racial patina—a patina for which there’s no evidence.

In the end, this kind of imbalance is what you expect when schools vary in quality, and students want to go to schools with the best reputation, which, unsurprisingly, give the best opportunities to interact with good faculty and have the resources to do good research. The fact that the existing system does not produce sufficient diversity for people is not the fault of elitism or hiring bias, but because the pipeline itself does not take in enough minority students at the outset. And that’s a residuum of racism in the past. The pipeline problem needs to be fixed, but at the entry end, not at the exist.

Nevertheless, Nowogrodzki’s remedy for the situation is pretty much okay with me:

There are ways in which academia could de-emphasize prestige and reduce inequalities. The first, basic step is questioning prestige and where it comes from, Gonzales says. She advises hiring committees to list all the places they plan to advertise a position, including their personal connections; examine the institutional diversity of the list; and add HBCUs, HSIs and regional institutions if they are not already included.

Not much wrong with that. The problem, though,  is that widely advertising jobs to huge lists of Ph.D.-granting schools is already being done: emails are sent out to schools, jobs are placed online in both big venues (e.g. Science and Nature), and there are group-specific sites where jobs can be seen. It is the fault of the candidate, not of the hiring school, if candidates are not aware of the jobs that are on offer. (By the way, many schools actively discourage their faculty from using personal connections to ask for recommendations of candidates, for that already imposes an unfair bias on a search.)

As for “questioning prestige and where it comes from”, well, we don’t have time for that: we’re too busy advertising widely, deciding what kind of job we have to offer, and which candidates are the most desirable. We’ll leave the “questioning prestige” bit to the sociologists of science.

This disproportionality seems to me a tempest in a teapot: an inevitable result of an inequality in the quality of Ph.D.-granting schools. The remedy, which hiring schools already use, is to put very little weight on where a candidate got their Ph.D. and a lot of weight on the research and knowledge they’ve produced while getting their Ph.D. and doing their postdocs. Advertising is already very wide (what university wouldn’t want as many candidates as possible to know about a job?), and “questioning prestige” is an ineffectual substitute for widening the opening of the pipeline.

45 thoughts on “Nature: many Ph.D.s produced from few universities, ergo elitism and bias”